Meall Buidhe and Stuchd an Lochain

Meall Buidhe and Stuchd an Lochain


The weather was dry and overcast with some rain forecast for later in the day as I left Aberfeldy on the last day of our holiday. The drive to the far west end of Glen Lyon took a little longer than expected and I didn’t get there until nearly 8.30am.

GPX of track truncated due to number of trackpoints:

1 MBuidhe_StuchdaL_activelog 15oct2010 trunc.gpx Open full screen  NB: Walkhighlands is not responsible for the accuracy of gpx files in users posts

I parked just down from the information point before the dam and set off towards Meall Buidhe. 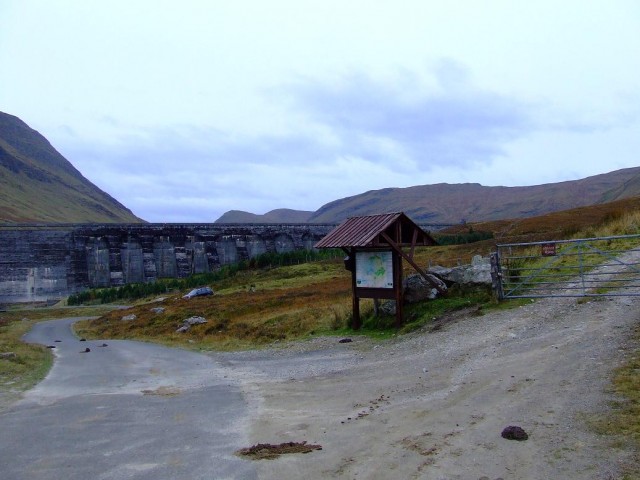 Initially I followed the land rover track NW before changing direction and heading due north up Coire nam Miseach in the direction of Meall a Phuill. 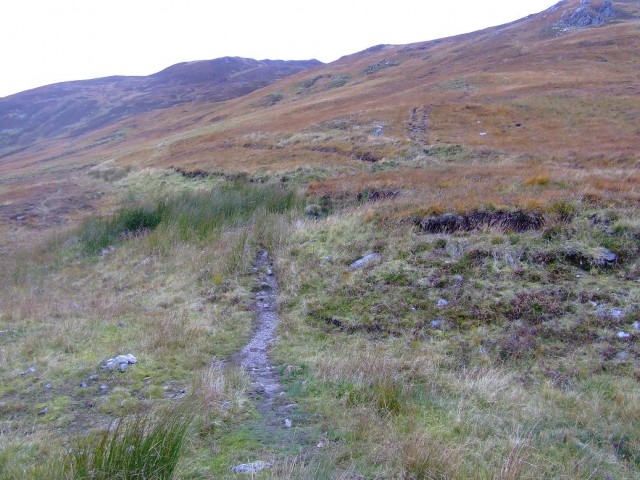 The track was fairly boggy for large sections of the walk and I kept losing and regaining it. That said, walking on the heather and moorland instead of the track was fine. 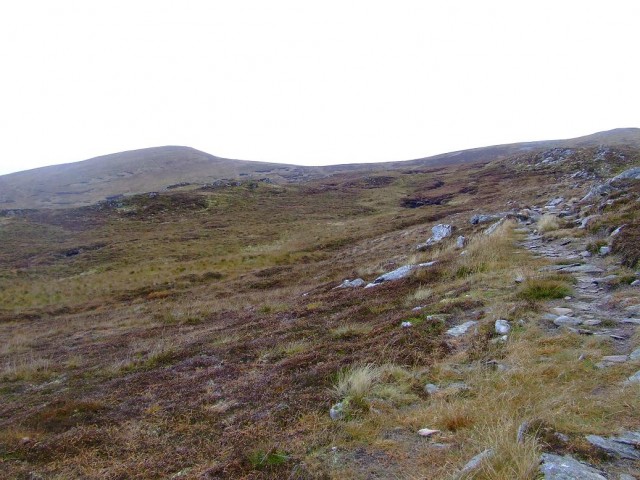 There were good views back down towards Loch an Daimh and Stuchd an Lochain on the way up. However, the weather meant that the views weren’t very clear or bright. Further up I could see the north approach to Meall Ghaordaidh with its two spurs, Creag Laoghain and Creag an Tulabhain. Further up at around 839m, there’s a cairn (NN 504487) where the track splits and I headed NW away from Meall a Phuill to go up the west side of Glas Choire. 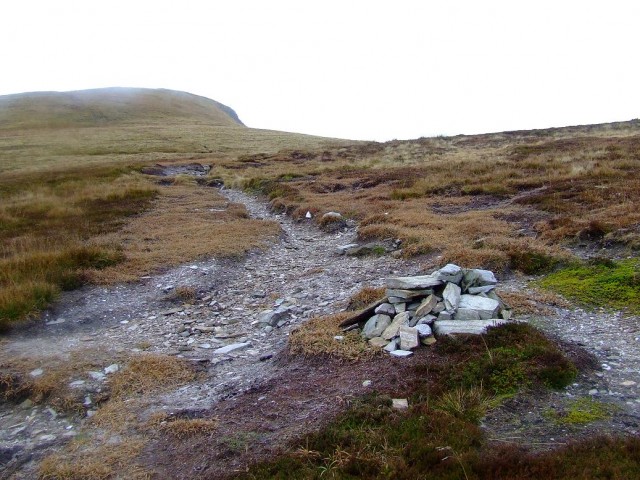 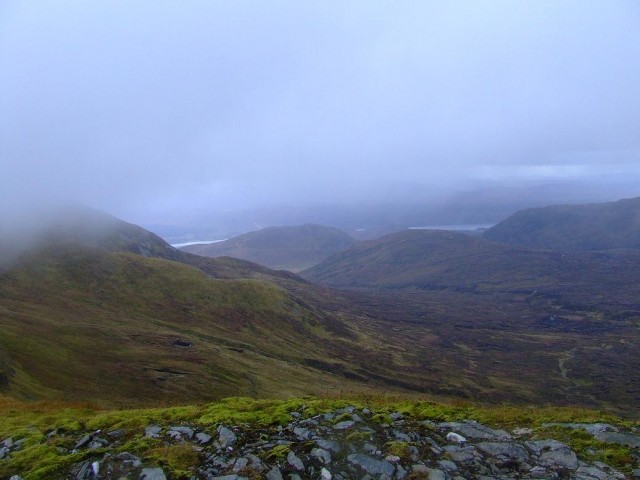 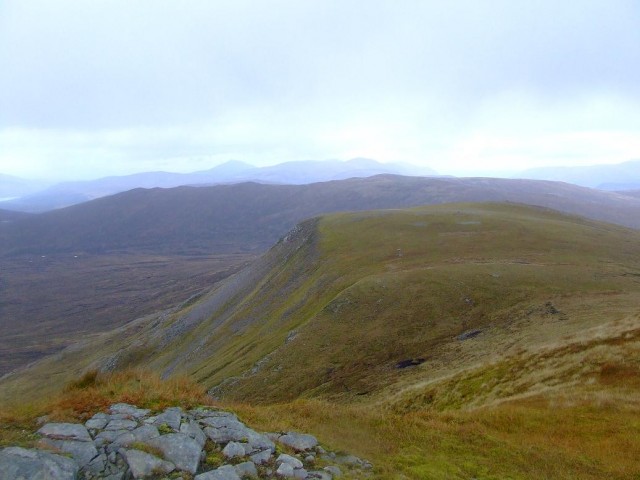 Once I had reached the 917m level the track started to head more northerly towards the top of Meall Buidhe. This is essentially a long wide ridge with a number of small cairns marking the way. There’s only a small rise form the start of this bit until I arrived at the larger summit cairn at the north end. Unfortunately the mist and cloud had rolled in and I couldn’t really see much. 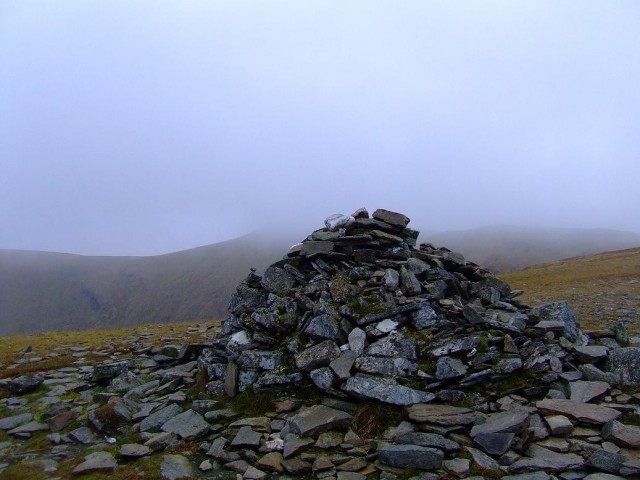 After a short break, I headed back down the same way. I got a good view of Meall a Phuill over to the west and could also see Stuchd an Lochain with its own Lochan nan Cat to the SW. 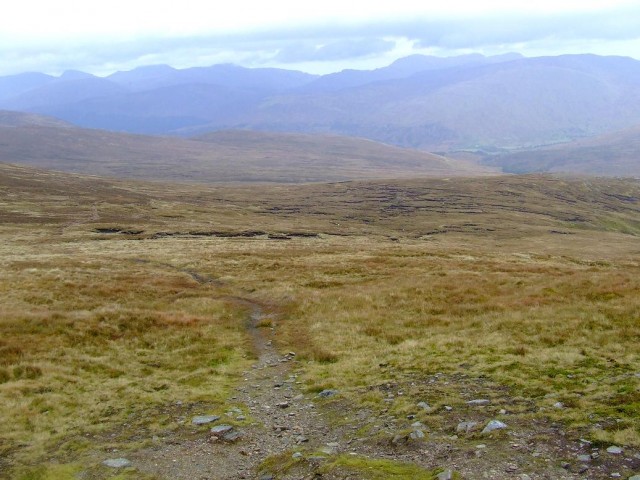 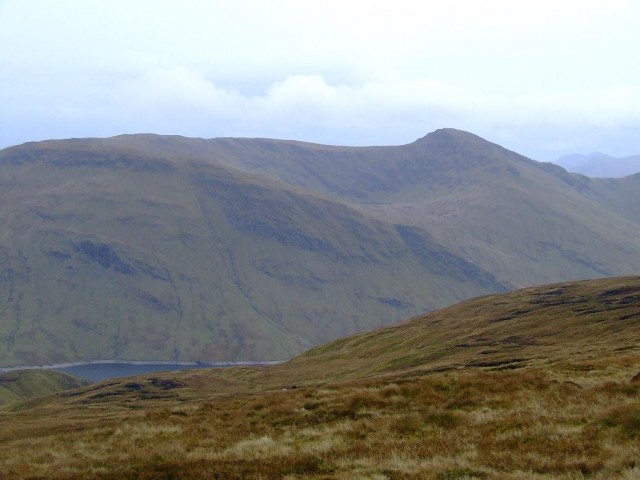 I followed the track back down and was soon back on the landrover track at the loch side. 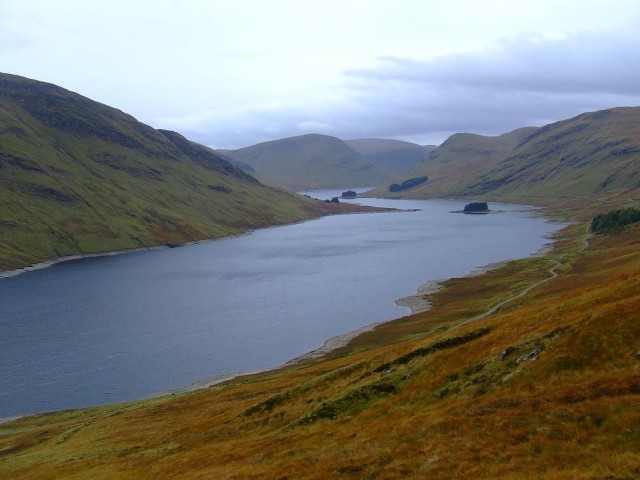 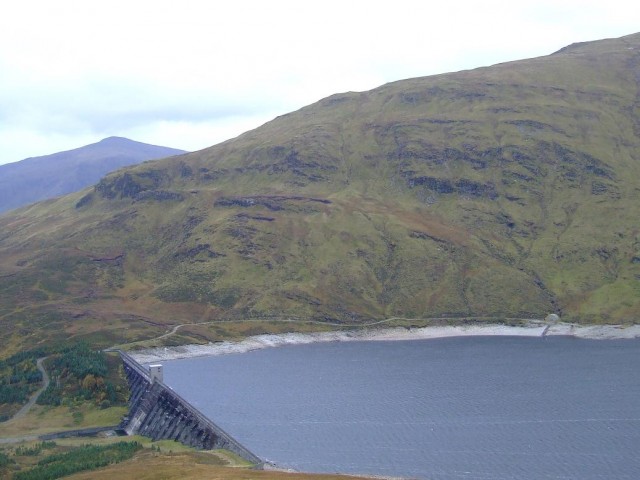 I took a shortcut over the ground to the east of the dam to the side of the trees then headed over the road past the dam which brought me round to the south side of Loch an Daimh. A short way along this track at NN508460 there’s a small cairn on the left which marks the start of the track up to Stuchd an Lochain. The track rises fairly steeply and tends to be boggy and wet for much of the earlier stage up the hillside. This may have been because I lost the track in places and ended up walking up what was effectively a rocky stream bed. 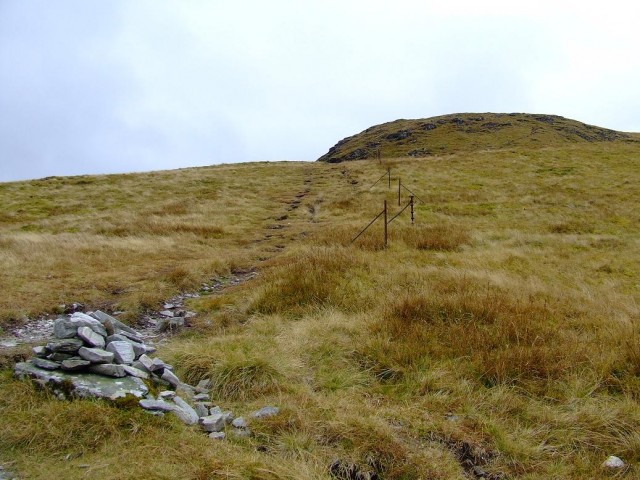 Further up past the 887m mark the path became clearer and drier and it wasn’t long before I was up on to the west side of Sron Chona Choirein where I turned to more of a westerly direction on reaching a minor top on the way at 927m. 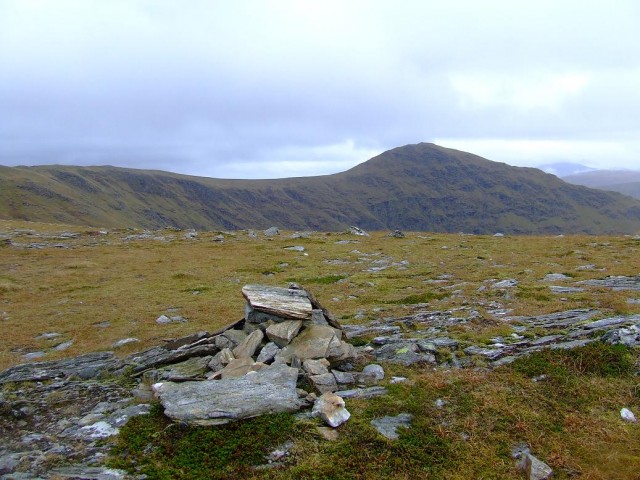 By this time I could clearly see the final approach up to Stuchd an Lochain and the ridge leading up to it. Its north side falls very steeply down to Lochan nan Cat. There is a also a line of old rusty fence posts which go all the way up to the side of the summit. 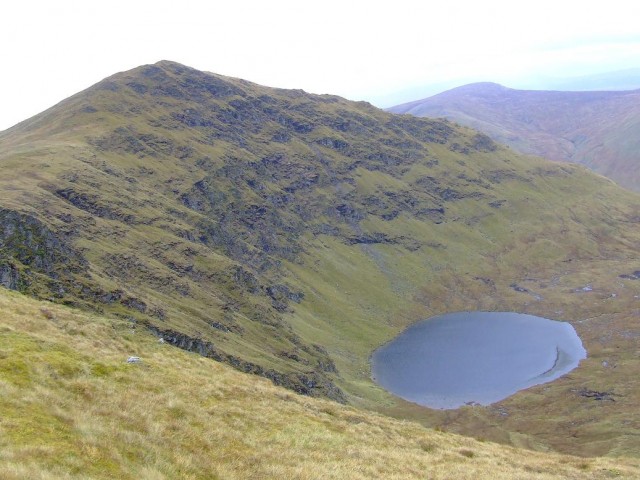 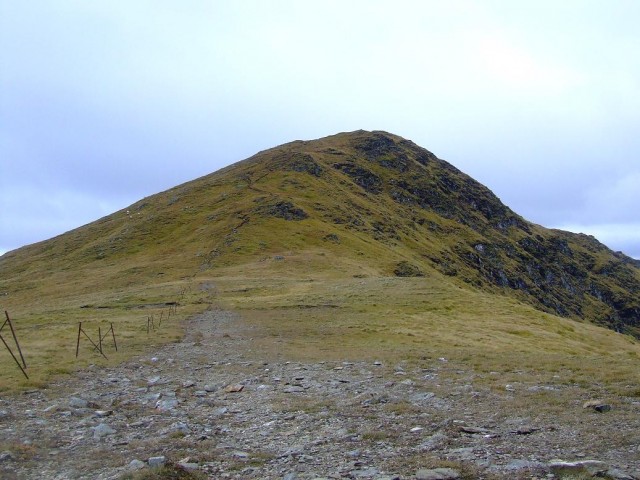 There are good views all round from the summit but the rather grey weather and approaching clouds meant that they were not very clear today. 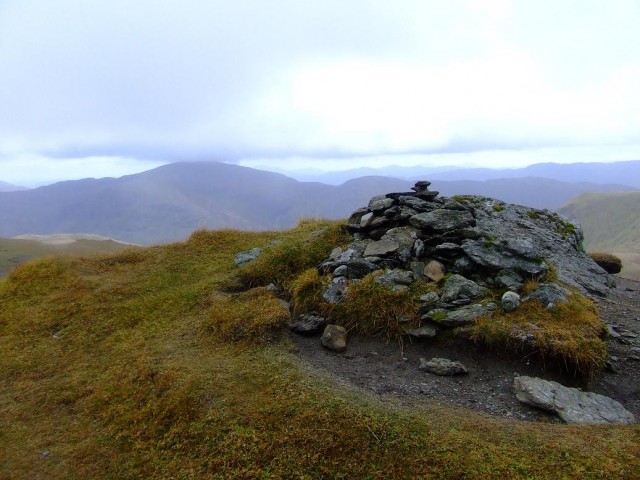 To the NW up Loch an Daimh I think I could see Beinn Dorain and Beinn an Dothaidh in the distance while Meall Buidhe was over to the north. 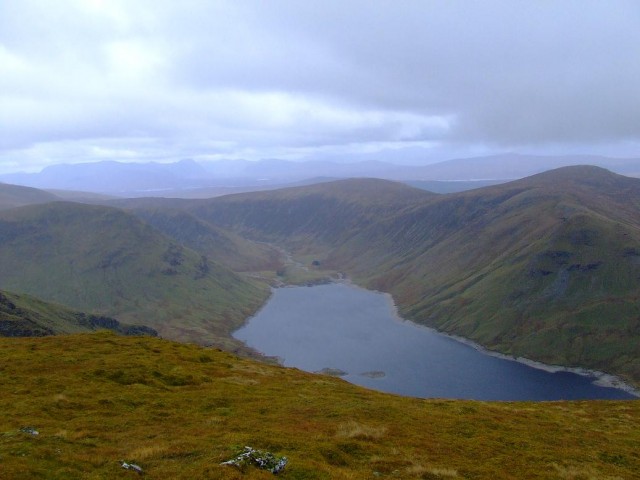 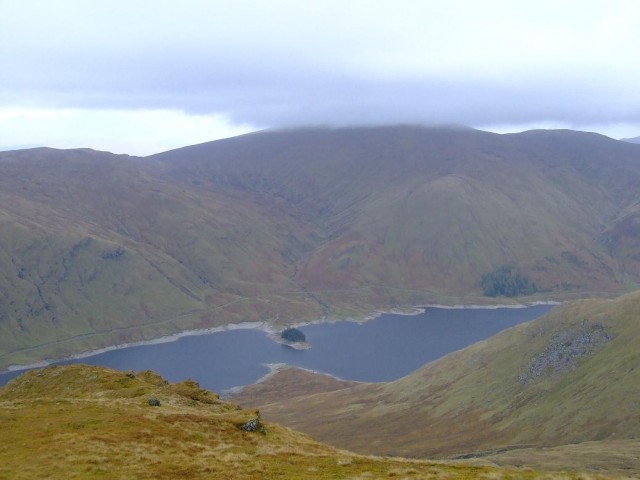 The cloud was thickening with a little light rain so I headed off back down to the Loch. On the way down the steep north sides were even more evident and I got a good view of Lochan nan Cat which is close to being a perfect circle. 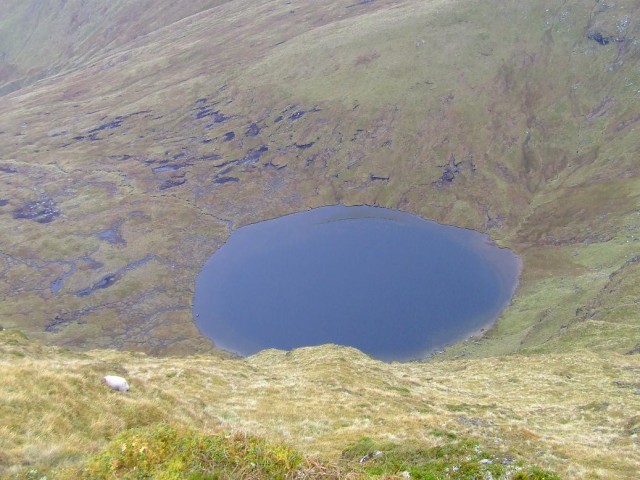 There were also views up Glen Lyon but again they were not that clear because of the weather as well as views of Meall Ghaordaidh to the south. 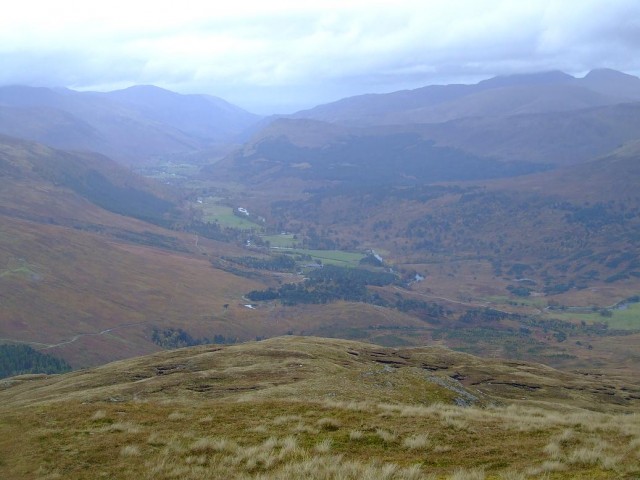 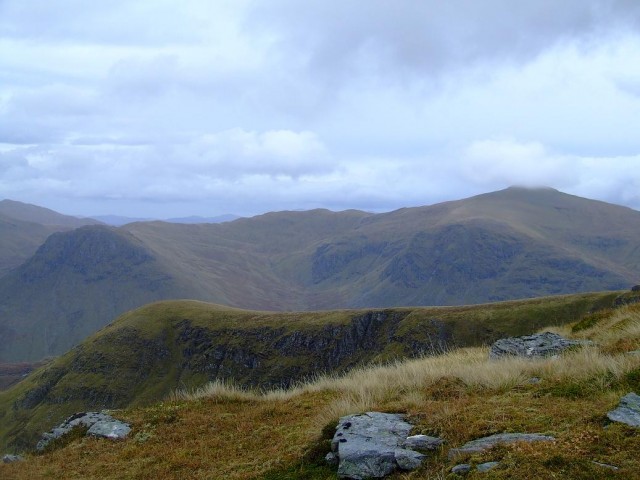 Lower down, as the track was covered in wet and loose rock, I often found it easier walking down the hillside on the side of the track - this was fairly straightforward on the grassy moorland. 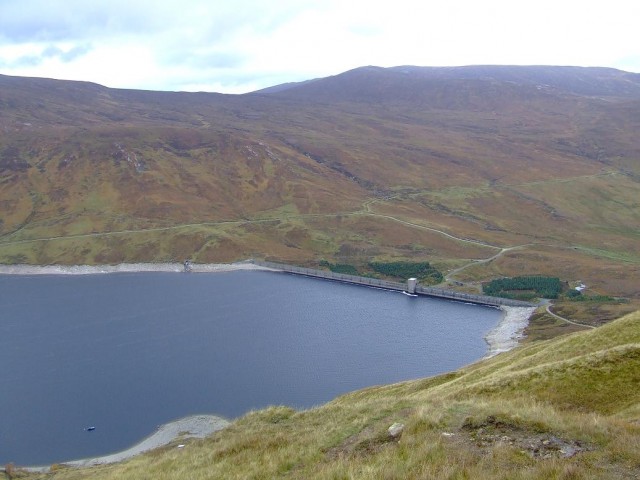 Back down at the loch side, I headed round the dam and back to the car. The walks up the two hills had been fairly straightforward and I was back at the car by 2pm. If the weather had been better and sunset later than just after 6pm (as I'm not fit enough to do a "monty" and run up and down), I would have liked to have climbed Meall Ghaordaidh from its north side as it would have meant a short drive round to Glen Lyon. As it was, I was happy with the day’s walking and decided to leave it for another day with better weather.

Meall Ghaordaidh looks great from the Glen Lyon side - I may well do it again sometime from there... when I've finished all the others that is. I thought Meall Bhuidhe was just about the easiest Munro of them all but really enjoyed it and liked the views coming back from its summit... unfortunately, that was the week I forgot my camera

I'd agree mc - it didn't take long at all to get up to the top of Meall Buidhe.

I'd read that the southern approach to Meall Ghaordaidh was the more frequent approach but the Glen Lyon approach up between the two corries looks a lot more interesting. Another day when the weather's better..........

The Southern approach from Glen Lochay is pretty boring really... I had a good look down the Glen Lyon side and it looked much nicer

Nice detailed report there. These two sound quite straightforward if the weather is good.
I have done a few walks where I have to pass the car on my way to somewhere else and it takes some willpower when the weather is not as good.

They don't take long at all... I did them once after driving up from Cumbria to Scotland and arriving in Glen Lyon in the evening. It was easy enough to get both done and still get set up for the night further down the glen before dark.

sku - mc's bang on as if I'd stopped after Meall Buidhe I'd have been home in time for morning coffee (and I'm not exactly the fittest person around !) I can't remember exactly but I think out of the total 5.5hrs there would have been some 1 - 1.5hrs stoppage for photos, food etc so probably under about 4.5hrs walking time and that's not pushing it. Also, it's a fair drive to get the end of the glen only to do one of them so on this occasion I didn't need too much willpower

Great description in your report, my friend and I are planning to do Buidhe tomorrow but think a 2hr drive would be better spent if we take in Lochain too,,so heres hoping ......watch this space. G