Having finished the Borders Abbeys Way in the last days of 2016, I decided that the Fife Coastal Path might make a good project for 2017 - local enough to pop over and back, and continuing my trek along the east coast which at that point had reached Redcar in the south, and more or less to Musselburgh at then more confused northern end. It didn't happen, but I did get started, getting from the oldest road bridge, at Kincardine, to the newest one, west of North Queensferry.

This part of Fife, west of the bridges, feels like a bit of a no man's land - post-industrial rather than touristy, and looking west to Alloa and Stirling rather than east to the rest of Fife or south to Edinburgh. It's also more difficult to reach from Edinburgh - bus to Dunfermline, hang around for a bit, and then get back on a bus heading, confusingly, to Glasgow.

Kincardine, at the start of the Fife Coastal path, sums up the area perfectly - a main street that you might expect to find in an ex-mining town or similar, combined with a medieval market cross. There are actually quite a lot of old buildings in the town - I didn't go up this time to Tulliallan Castle, now the police college, and the remains of the 17th century church at the top of the town, since I'd been before when I was looking for Admiral Keith's grave, but I had a prowl around the lower end.

A stepped gable end on this old house was a reminder that it was Fife, if only barely. The path starts at the coastal edge of the town, on the far side of a complicated road junction, and follows a cycle path before following minor roads. For most people Kincardine is mostly the name of a bridge - and even then only one to be sworn at when the Forth bridge is closed. It must have been a very useful link when first opened, although it's not nearly as impressive as the main Forth bridges. At a junction just before Longannet the path comes out at onto a bigger road and just seems to vanish - I remember being equally confused the first time I walked along to Culross. There is a Fife Coastal Path sign in the picture, over on the right hand edge, but there's nothing on the many signs in front of you to show which way to go, and my old map doesn't show this part of the path.

The route carried on by the side of the road, past the old power station and an untidy but colourful collection of farm buildings, before slipping off onto a path following the railway line which looked like it had once been a railway line itself. 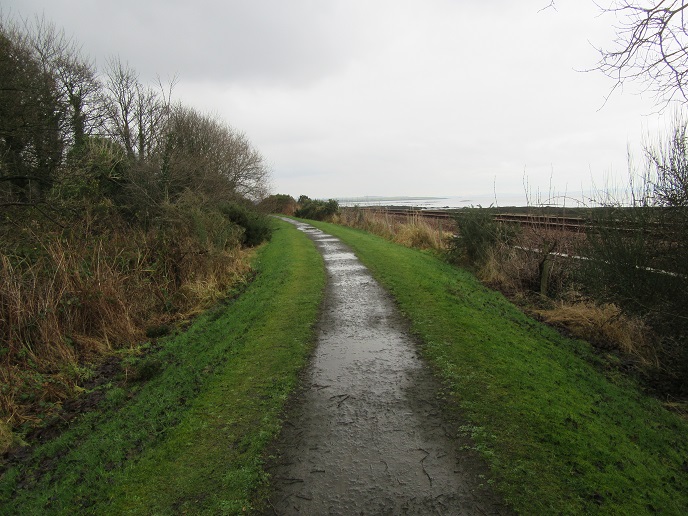 This followed the coast closely, but sometimes it seemed as if part of the coast had got cut off on the wrong side of the line. Culross began with a row of modern houses, apparently segregated from the old centre of the village, and the old pier was visible up ahead. Somewhere out there are the remains of the seaward entrance of The Moat, apparently the first undersea coal mine in the world, where coals could be loaded directly onto waiting boats - I think there is still something to be seen of it, but possibly only at a lower tide, and I confined my explorations to the land.

The main landmark of Culross is the very yellow palace, but I've never been there at the right time of year to get inside. In the town square, or at least the town irregular shape, is a memorial to Thomas Cochrane, naval hero of various countries and also general idiot. I ate my lunch sitting on one of the benches here, and then went to the cafe to look for tea and cake. Cochrane and the Townhouse

Culross is a good place for prowling, full of cobbled lanes, and I went right up to the abbey before coming back to the shore to head on. Looking back the view was mainly of the power station, and across the water mostly the oil refinery at Grangemouth, but ahead I was at least looking to the distant bridges, with the white ghost of the new bridge growing in front of the others. I left the main coastal path to detour round the edge of the reclaimed land at Preston Island - the site of the island itself, created in the early 19th century to house a saltworks, is still visible, but the rest is recent spoil from Longannet. Although the track I took was marked on the map as the way out, it only brought me up to the locked gate of somebody's yard, and I ended up scrambling up a slope to a footbridge above me to find a way over the railway line.

Valleyfield, Low and High, where I meant to catch the bus, was a confusing place of parallel roads, and what the timetable said the bus did didn't seem to match what it did on the ground - at least, the only glimpse I got of it it was heading off in the wrong direction. So having missed one bus I decided to walk along to where the path split from the road at Torryburn and wait for the next there.

There was a board at the end of the village marking the site of the 18th century Valleyfield House, where the botanist David Douglas (of the fir) once worked in the garden, and then Newmills was more of an old rural village than I expected, with a core of old solid houses among a scattering of newer ones, and the gateway of another 18th century mansion, Torrie House. With time in hand I wandered down as far as the ruins of the old Crombie church, and then back to sit by the park and watch the light over the sea. My progress along the coastal path was delayed by various dancing events in February, and then by a bug I got at the start of March. Two weeks later I thought I was on the mend, and fit for at least a gentle walk, and set back out for this nice flat edge of Fife - but I was wrong, and although I made it through a decent chunk of the intended walk it was really another two weeks before I was fit to be out.

From Torryburn the route left the road and headed off on a good path round the edge of the bay. The ruins of Crombie old parish church might date back to the 13th century, and definitely to the 15th century, when the parish was combined with Torryburn. There are some interesting gravestones, although it seemed a shame that it was all just crumbling away. From the church the path turned inland to bypass the DM Crombie depot. Crombie as a parish might be old, but Crombie itself seemed less a village and more just a council estate set down in the middle of fields. A concrete box on the corner had been a village shop, now closed, of a Glasgow type, but the new church, although also closed, was a nice green wooden building, not much like a Scottish church at all. The path follows the main road for a while before cutting down by farm tracks to Charlestown, an 18th century planned village which still has most of its original layout. The village shop here is in a building which looks like an enormous hobbit house and is apparently an old granary. All along this part of the coast I was surprised by the amount of history remaining in what looked like a very unpromising area - and also by the amount of activity and industry going on here in the past.

The road then leads on along the coast - at some point you can turn back on yourself down to the harbour and the old limekilns, but it's quite a long way back and I didn't, although I think they're well worth a visit.

Neighbouring Limekilns is more of a village, with a scattering of pubs and shops and cafes (although I went into the first pub I came to for my cup of tea, as I wasn't sure I would find another) - but what it doesn't have is the llimekins, which are in Charlestown, so the name is a bit of a mystery.

The view from the start of the village was quite industrial, looking along to Rosyth dockyard with a background of bridges. The far end had quite a different view ahead, masts in the little harbour and hills behind. The path leaves the road and sticks to the coast along past the harbour to another ruined church, this time the old parish church of Rosyth. A path full of corners then led between a plantation and a bare field, back to the main road. I went slightly wrong in Rosyth and followed the road round the edge of the naval base rather than sticking to the main road and cutting down later, but I don't think it made any particular difference - the two roads joined at a roundabout, and then a path led down through a wood to the old dovecot of Rosyth Castle. The castle itself, on the other side of the road, once stood almost in the Forth, but is now a bit stranded in the middle of a business park built on reclaimed land.

The new bridge, recently joined on at both ends but still a few months from opening, was now right ahead. I could never quite decide whether I liked it or not - I like the shape, with its echoes of the two earlier bridges, but felt that the colour stood out too much, and blocked too much of the view behind. It's grown on me a bit more since then. I had meant to go on through North Queensferry, but having used up most of my available energy and most of the light I just slipped up to Ferry Toll through a confusion of new roads to get a bus home.

And at this point life got properly in the way - it was another two weeks before I was really feeling better, and by then I was off to the Lake District and the Cleveland Way, and then into the usual summer rush. I did think about picking up the path again in the autumn, but I knew I wouldn't be done by the end of the year, and eventually decided to go for the Berwickshire Coast Path instead. So it was a year from the start - the first Sunday in February again - when I came back to Ferry Toll to pick up the path.