So when the wife told me a few months ago that she was going away for a hen weekend, she asked what I would do. I consulted my diary and found that apart from Saturday afternoon, I had nothing planned. That soon changed. I decided that a trip into the Scottish mountains was much overdue and quickly planned a few routes in my head. I waited until the day before booking accommodation as I didn’t fancy coming up to spend the weekend sitting in heavy rain and dense cloud. Thankfully, that wasn’t the forecast.

I arrived in Pitlochry just after 9pm and headed to the Youth Hostel. After a busy day and two previous restless nights I was shattered and headed to bed in the dorm I was sharing with 7 other blokes. I ventures into the dorm and attempted to make sure that there was no-one else asleep. It wouldn’t be the first time I’ve walked into a dorm late on and switched the light on to find at least one person who was asleep! I felt confident that there was no-one asleep in the room; no snoring, no breathing noises, no creaking beds. Great! I thought, and switched the light on. Unfortunately, there was one bloke asleep

. Thankfully, he was out for the count and not disturbed by the light. I quickly made the bed and switched the light out. The en-suite was at the opposite side of the room, which was probably just as well given that the toilet had the noisiest and longest flush known to man.

. It was 6 in the morning and whilst I attempted to get back to sleep I gave it up as a bad job and was up just after 7.

I decided to tackle Ben Vrackie first. It was close by and I thought it would be good to get an early start on this popular Corbett. The car park was about a mile away and easily found. A quick breakfast prior to setting off just before 8. The route up was clearly marked and well defined. Progress was steady. The skies were clear with cloud lingering in the glens. Ben Vrackie seemed to be soaking up the early morning sun. Loch a’ Chorie looked almost flat and the air was still. Perfect conditions really. Which way to Ben Vrackie? However, by the time I reached the summit, conditions were changing. Cloud was sweeping in and there was a strong breeze evident above 650m. Fine views were evident from the summit (although the photo's don't quite refect that), including the next destination; Schiehallion. Schiehallion from Ben Vrackie - It is there! Honest! The descent was easy along the track. I passed several people setting off on their days walking and received several comments about the fine specimen of headwear I was sporting. I passed two ladies who stopped to chat for a few moments. They described themselves as 'novice' walkers and wanted to ensure they were on the right route. Having advised them not to deviate from the path until they reached the summit, they enthusiastically set off again. I completed Ben Vrackie in a little over two and a half hours. A decent time, giving plenty of time to drive over and walk up Schiehallion.

Driving towards Schiehallion along the side of Loch Tummel afforded great views of he mountain serving to only whet the appetite further. I arrived at the Braes of Foss car park in good time and was able to set just before midday. On the clear and well maintained path, I was passed by a family seemingly dressed as though they were off into town shopping. They were in jeans and trainers with no evidence of any other clothing or even a map!

The route started to climb and the effect was beginning to take it’s toll on my aching thighs. I felt so unfit

. I felt my pace drop considerably, but with the aid of numerous stops, I continued to plod onwards and upwards. The mind was willing, the body less so. I was easily passed by a group of four who make the path seem like a gentle stroll. I sighed, appreciated that my fitness was not what it used to be and continued.

As I climbed upwards the wind picked up becoming blustery. The forecast had suggested that there may be gale force winds. The wind was intermittent, rather than persistent, so it wasn’t too bad. As the height increased, so did the density of the cloud. The cloud base appeared to have dropped significantly and was sat upon the mountain like a woolly hat pulled down past the ears. The accompanying wind and mizzle made viewing the route ahead difficult, especially as I reached the end of the path and onto the boulder field. End of the path, start of the boulder field The summit is up here - keep going!

I’d read a lot about the false summits that existed on Schiehallion, but I reasoned that if I assumed that each time I saw what appeared to be a summit, I told myself that it wasn’t, then I would be pleasantly surprised when I reached the top. Well that idea didn’t work. After seeing several ‘summits’ loom out of the dense cloud my optimistic attitude was replaced by ‘not another one!’ Although there was no clear and defined path on the way up, there was a suggestion of a path across the boulder field. I kept losing this path, but I soon picked it up, helped in part by the number of people descending down from the summit. Again, several comments were directed towards me regarding my choice of headwear.

With energy sapping bouldering affecting my weary legs, I paused and dug deep into my rucksack for some sustenance. I pulled out some food, but also a random packet of wine gums that I had no idea were in there. I decided that they were leftovers from when I was in the Pennines a few weeks ago. Either way, I wasn’t complaining. Indeed I was happily munching on them as I bounded across the rocks with renewed energy.

The summit finally came into view and in the cloud, as was though I had just happened upon it. It was almost like an anticlimax. I had hoped to gain views across the region, but that evidently wasn’t going to happen. At least the wind had eased somewhat so it was pleasant conditions. In the distance, you can see Rannoch Moor from Schiehallion summit - apparantly!

Given the lack of vista, it seemed pointless hanging around, so I began the decent down. The path through the boulders appeared more evident, probably because I was able to look down onto it, rather than up and over a mound of rocks. I did, however, attempt to break my wrists on several occasional. My Leki’s had an ability to get trapped between some rocks and would stay in a fixed position. As I attempted to move forwards, my body would go one way and my wrist the other as the Leki refused to follow. I would hear this sharp crack from my wrist and acute pain; eased only by yet another wine gum. Ah, the joys of walking poles.

I passed a family on the way up who were also getting demoralised by the repeated false summits. I reassured them that they weren’t far from the top. It was great to see all the kids who I’d passed on the mountain looking enthusiastic and keen

. I bounded down over the slippy wet rocks, and was soon at the head of the path for the descent to the car park. The rapid descent was taking it’s toll on my knees, but the Leki’s were invaluable once again. Definitely the best piece of kit I’ve bought

. I passed a few people slowly plodding their way up the path. Towards the foot of the slope, the weather suddenly seemed to change. The cloud lifted, restoring blue sky and brilliant sunshine. The cloud had all but gone from the mountain, although the summit remained under cloud. Now seemed the ideal time to be on or near the summit. I didn’t have the motivation to return though.

Both the climbs were straight forward and it’s easy to see why they are so popular. The clear and well defined paths make mapwork minimal and simple. I do sometimes wonder if routes like these are too ‘touristy’, as demonstrated by a family in jeans and t-shirts. Whilst in no way should it be an elitist activity, I just want to see people prepared and appreciate what they are undertaking and taking some responsibility for their actions. 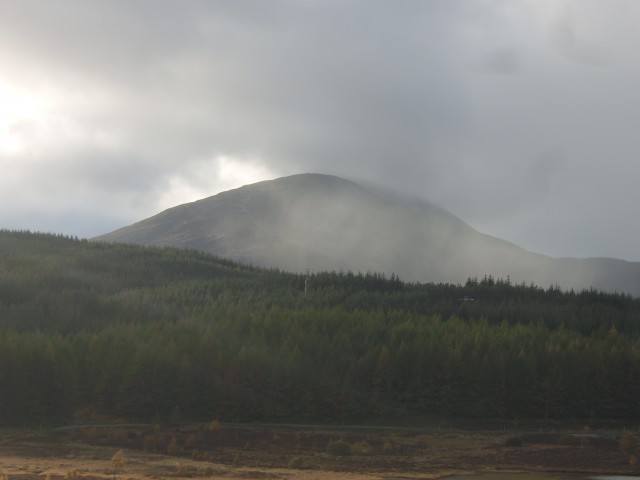 I was soon back at the car park which was by now almost deserted. I had completed the route in just under 4 hours. Not too bad I thought. I’d also timed it right for returning to Pitlochry for the chippy to open. Seemed like a fine way to end a grand days walking. I’d have preferred a pint or whisky, but I had the long drive home to complete first.

I read that as 'pint of whisky' at first

You can't give us all those mentions of your headwear without a pic of it , can you?

Yep thats what i reas as well "pint OF whisky" lol

Reckon its "The Stig" in his motorcycle helmet? =P

Maybe a pint OF whisky would have been nice, but I don't think I could have managed that!

The infamous hat has been around for years. There are other 'hats' but this is the one I'm sporting this season. 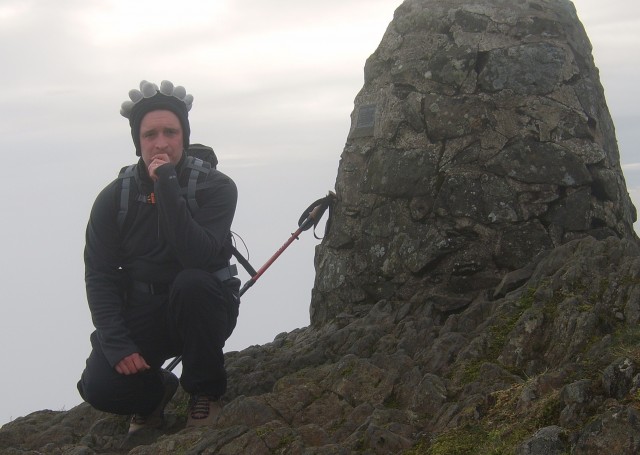 Schiehallion was my chosen hill for Sunday, but family stuff got in the way

don't feel quite so bad now after seeing your "views".

The hat is cool.

rambler wrote:Schiehallion was my chosen hill for Sunday, but family stuff got in the way

don't feel quite so bad now after seeing your "views".

Think the views were fine in the morning and late afternoon/early evening. I was just unlucky with timing I think.

Summit of Schiehallion does seem to go on a bit doesn't it.