I decided it was finally time to make a proper visit to my most local 2000 footers in the Pennines today - other than a brief through-route on my bike, I hadn't visited the area at all. To be honest, you need to be in the right frame of mind for some of them, and have the right forecast. Add to that some rather convoluted public transport and it's no wonder I've been to the Lake District more often!

Saturday promised to be cold and clear, but crucially the next promised dump of snow had not arrived, so things looked perfect. I was about to embark on a 20 mile-plus walk which would be mostly pathless, and mostly over peat bog, so as you can imagine, I wanted the ground to be as hard as possible.


Map.gpx Open full screen  NB: Walkhighlands is not responsible for the accuracy of gpx files in users posts
Getting to the start wasn't too bad - a train to Hexham followed by a bus to Allanheads, and I was on my way by 9:40am. Another guy got off the bus at the same place as me, also bound for Killhope Law, and we chatted for a bit before I pushed on. 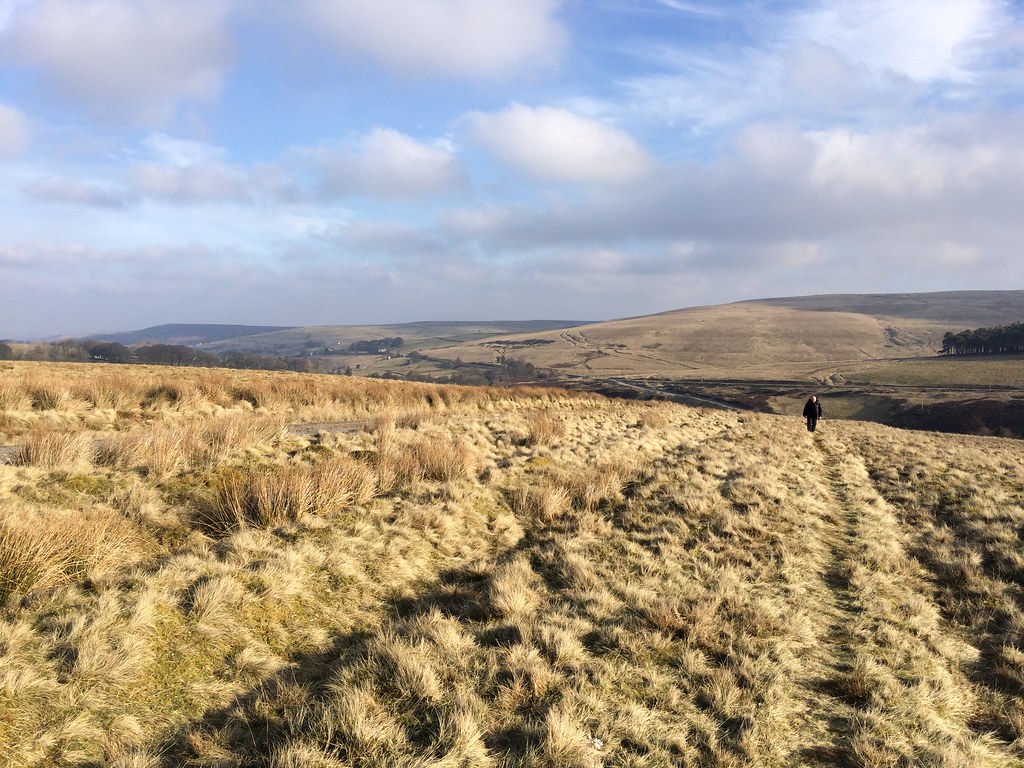 Allandale from the Carriers Way

I followed the Carriers Way - a track up onto the moorland which took me to a shooting hut within a few minutes of the summit - a good easy start to the day. While the day was sunny (if rather hazy), the first thing I noticed off the bus was the freezing, gusty wind. It wasn't that strong, but it whipped around and seemed to get into every corner. 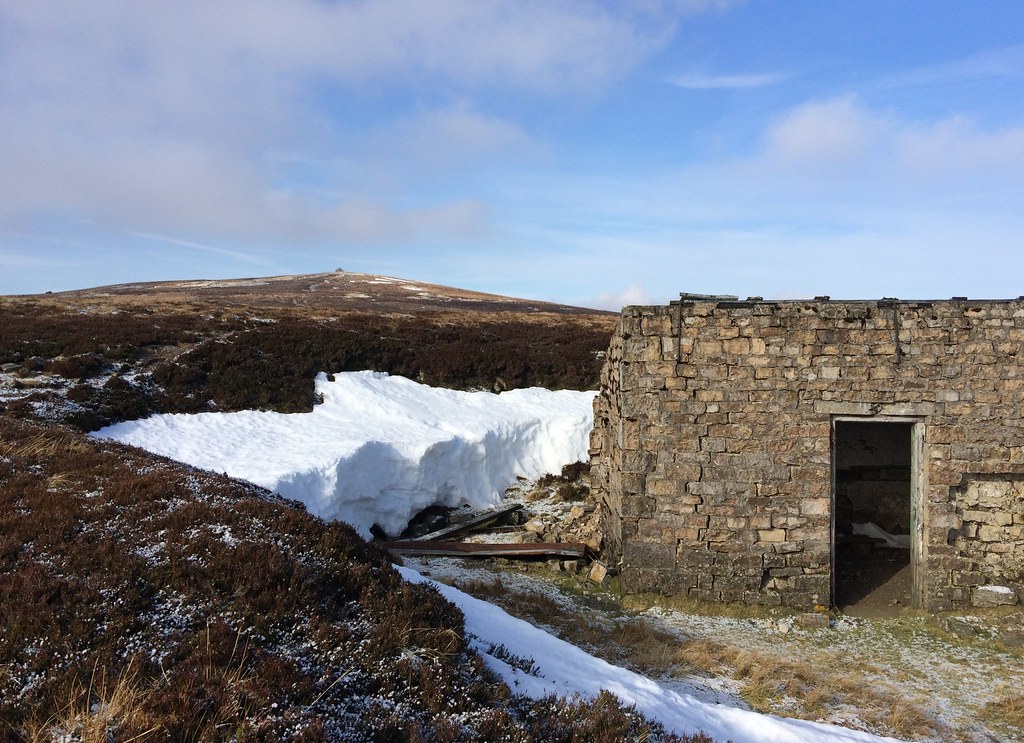 After leaving the summit of Killhope Law, I was soon in amongst what would become default territory for the rest of the day - hags, hags and more hags. Fortunately, as predicted, the ground was nicely solid for the most part, and I was able to cross the ground with not too much effort. 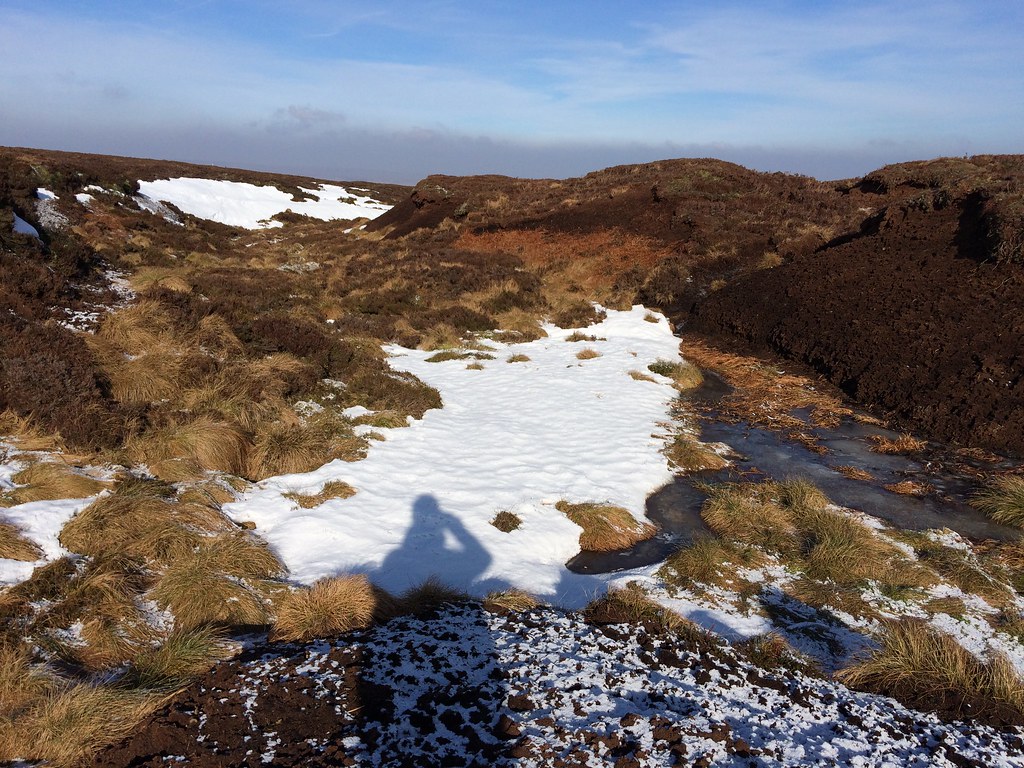 There is certainly a lot of space on these hills - it took me a little while to get myself orientated, and I soon realised that the insignificant pudding away over to my right was actually my next summit. From the point where I crossed the Allanheads - Nenthead road, it was downhill, and the summit actually looked lower than the road! 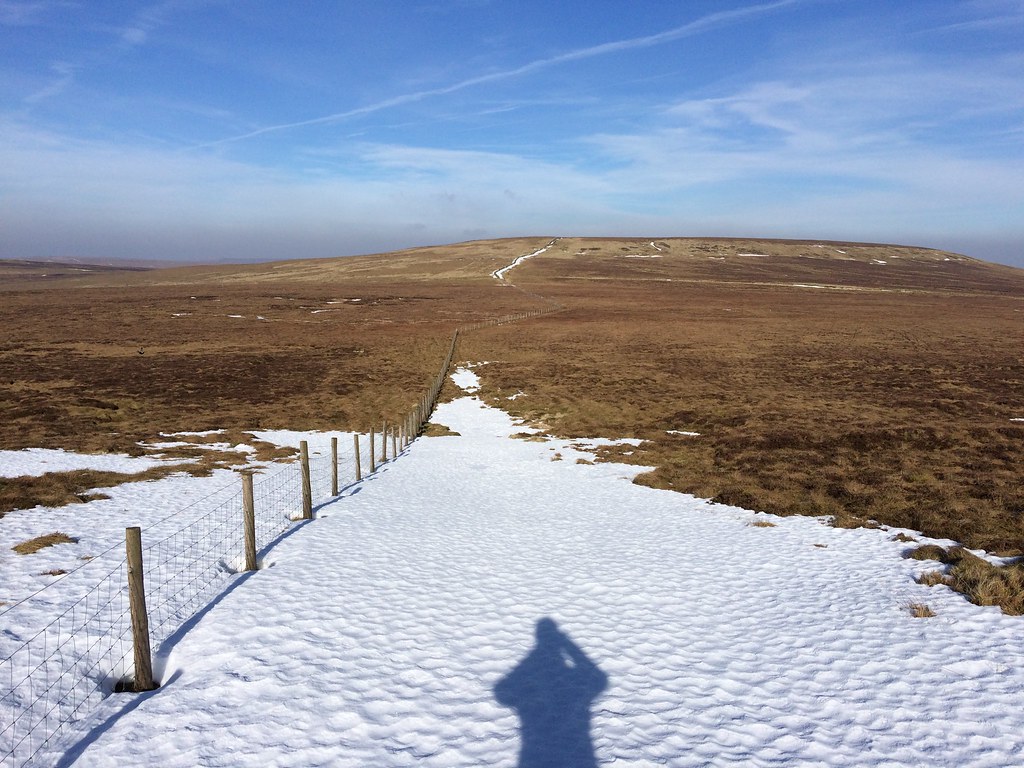 The Dodd from the road crossing

It was quite a pleasant walk to The Dodd, marred by the summit area itself being a maze of hags - a theme for most of today's summits. The highest point wasn't entirely obvious, but I could spy a cairn of sorts on a hag at the far side, so I went over to that. 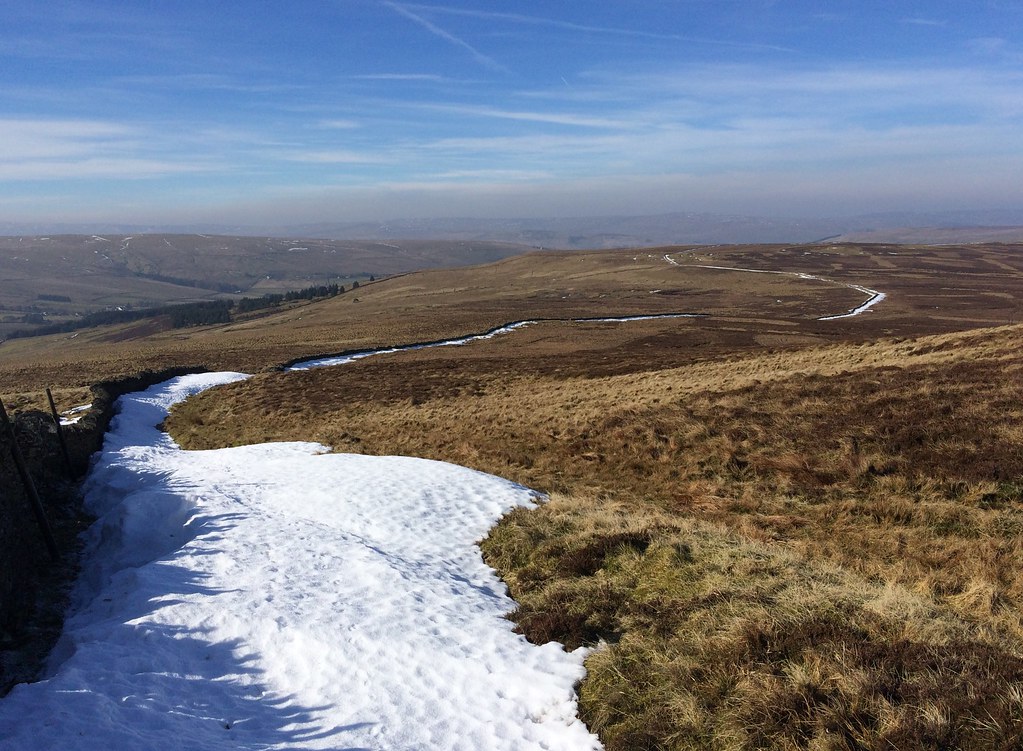 Wall dropping off The Dodd into Nentdale

Dropping off The Dodd was more pleasant. I soon picked up a track which led to Nenthead, and found a spot behind a wall to have an early lunch. The wind was at its worst around here, and I realised that I would be walking into it for at least half of the day 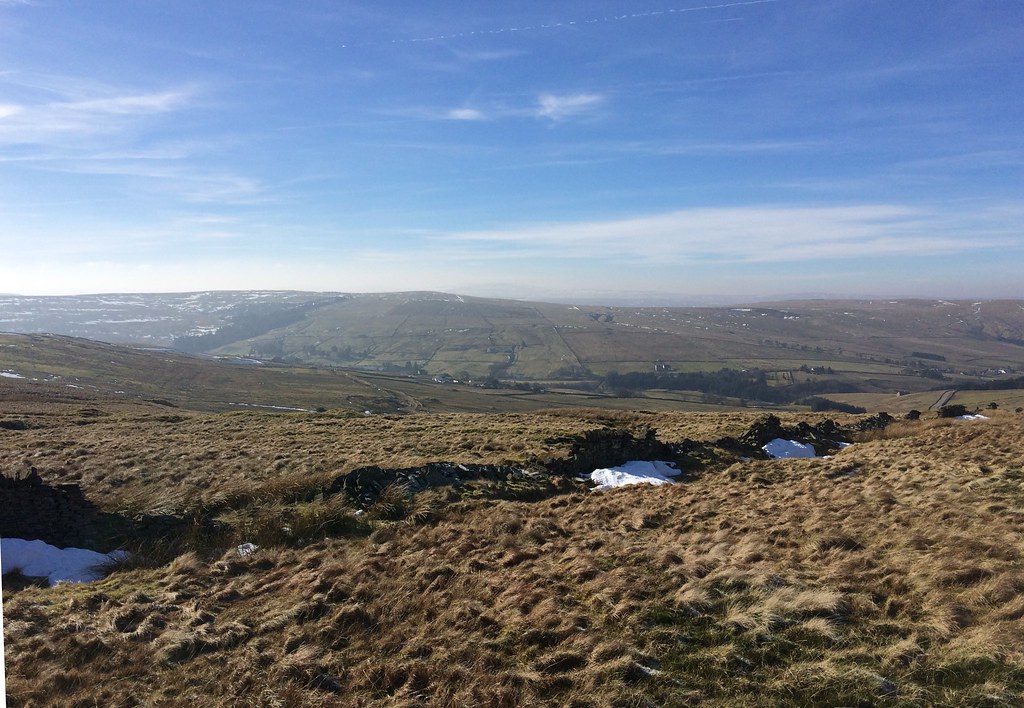 Nenthead from The Dodd 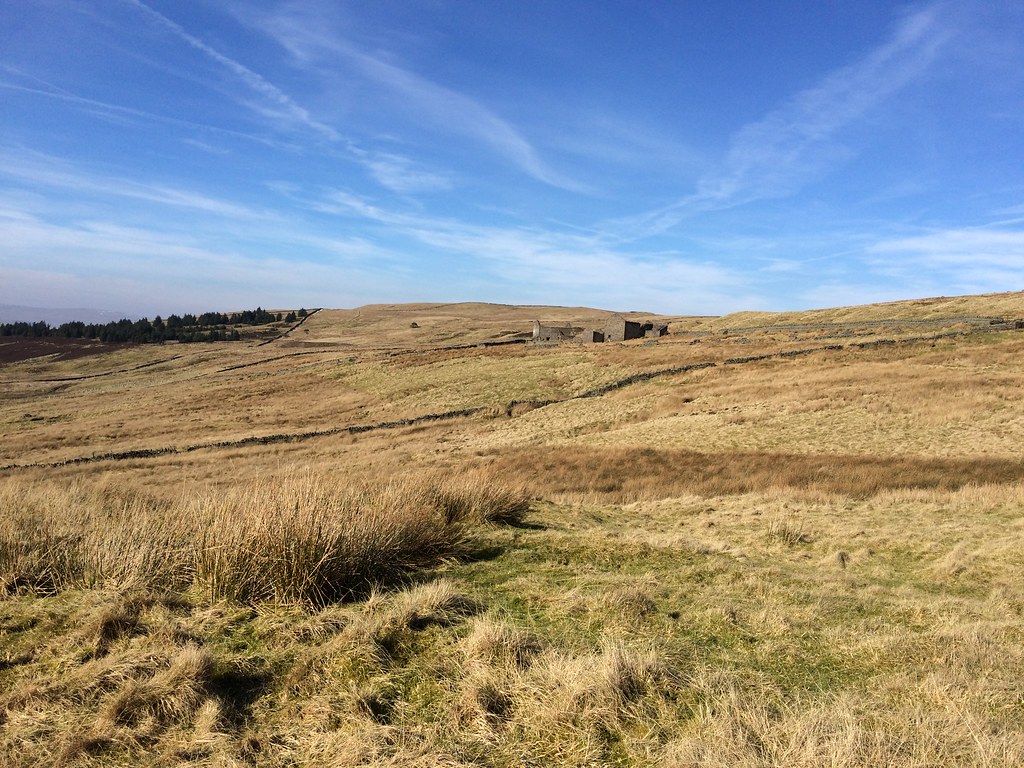 Flinty Fell was probably the least distinct in a series of non-distinguished summits today, but at least it was easy to get to, with a road passing close to the top. There may have been more interesting routes up, but I was happy to stick to the road for now. The actual summit isn't marked on the map, as the high point is a small pile of overgrown workings (the OS tend not to show contours for man-made features). 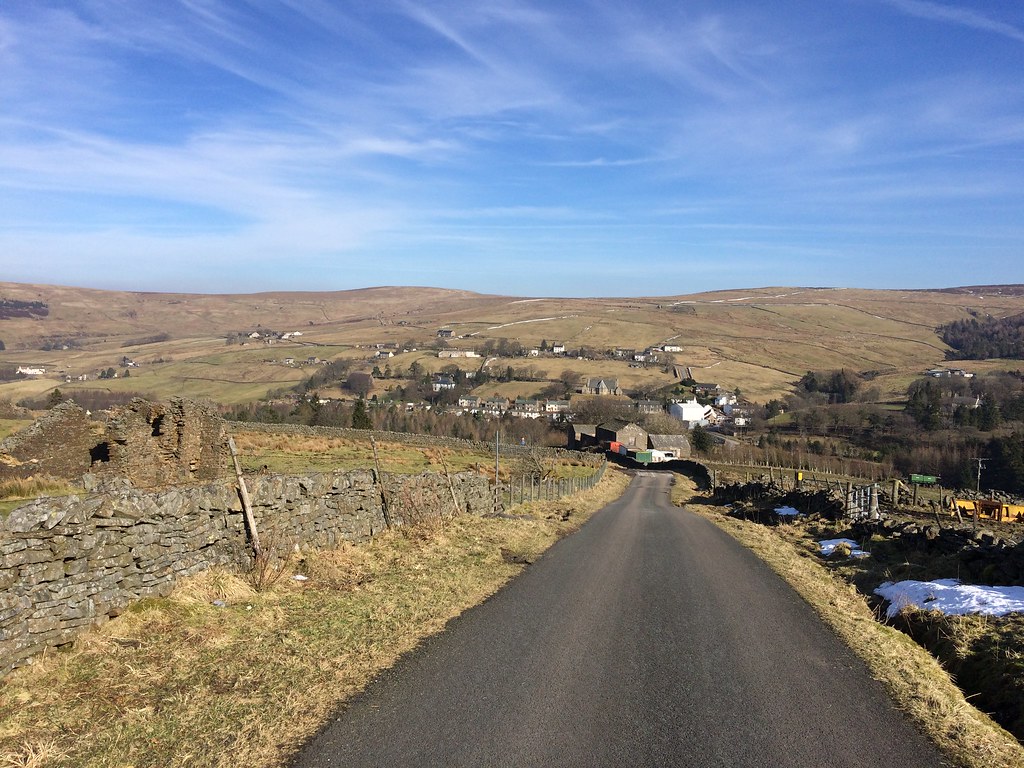 Leaving Nenthead on the road to Garrigill

A mixture of track and frozen bog took me across to Perry's Dam, a small reservoir presumably built to supply the mines at Nenthead. There looked to be a lot of tedious moorland between me and the summit of Dead Stones, where I would be into the real meat of the day - the traverse of the southern watershed of Weardale. Fortunately I found a long tongue of hard snow in one of the gills which led me most of the way onto the plateau. 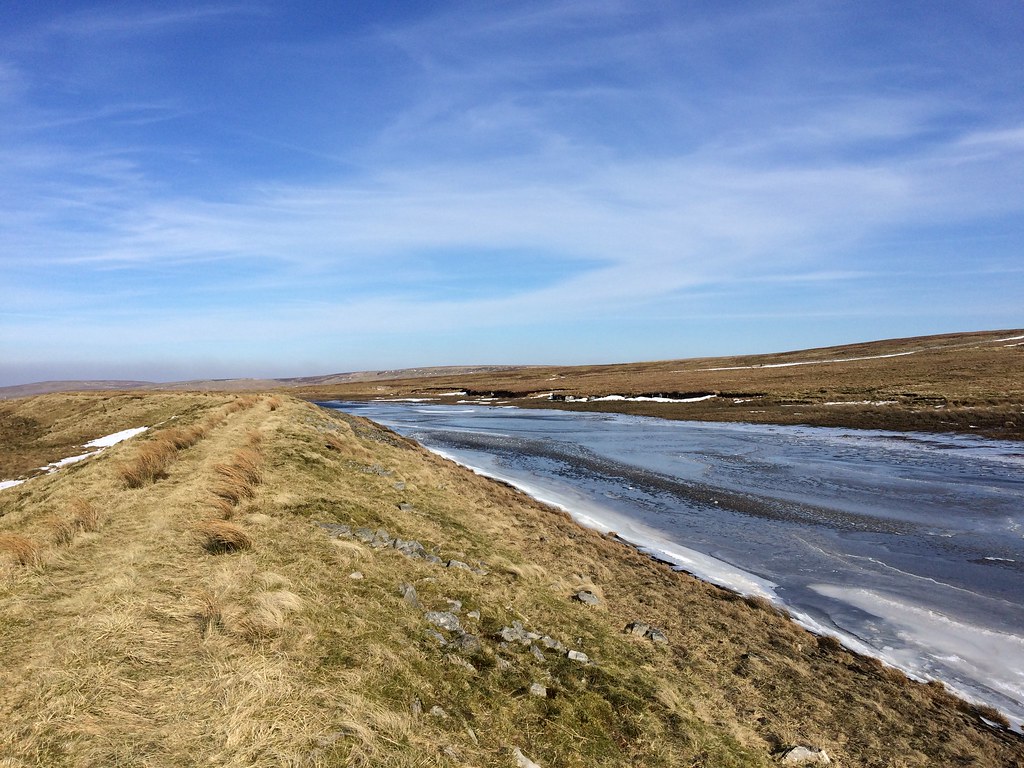 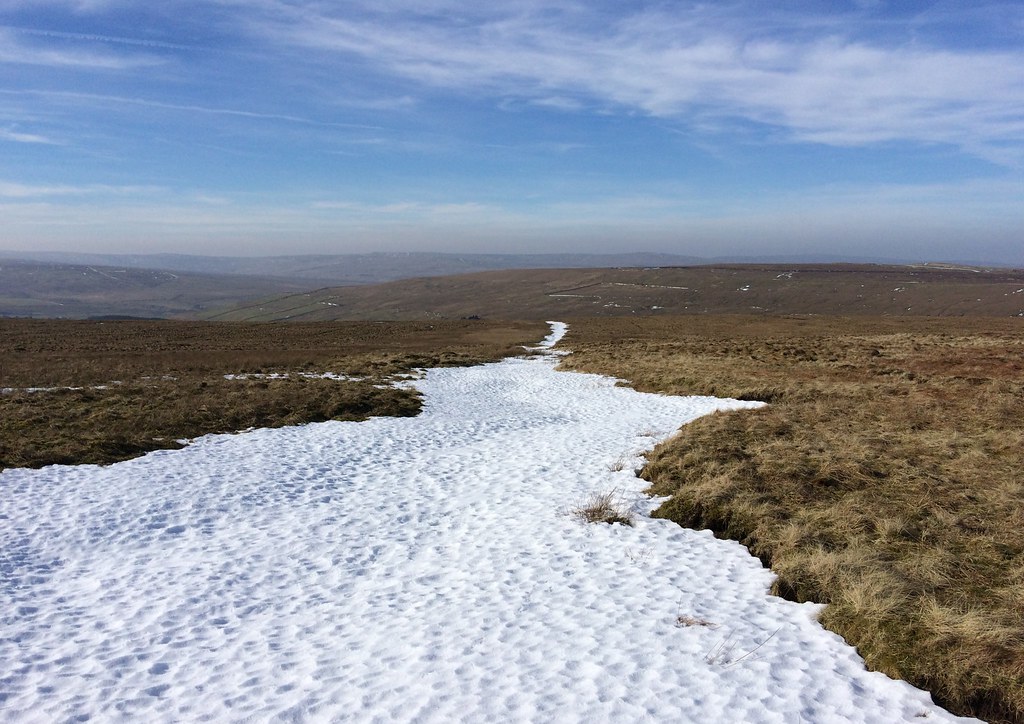 The western Pennines were featuring more and more in my views now, with the radar station on the summit of Great Dun Fell appearing higher than Cross Fell to the right (even though it is almost 50m lower). There were sketches of path between Dead Stones and Burnhope Seat, with some old pallets dropped in a few places to assist with the bog. This looked fairly horrific, but was easy in today's frozen conditions. And not a day too early either - I could see some knee-deep footprints made by someone who must hade done this a few days earlier when the snow was still soft. 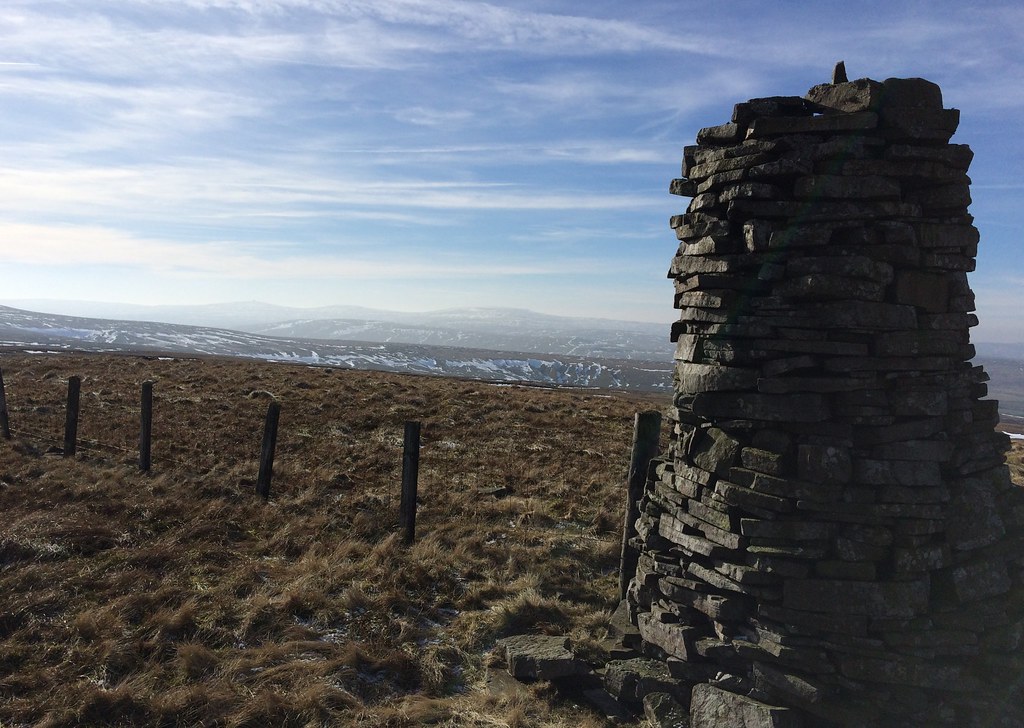 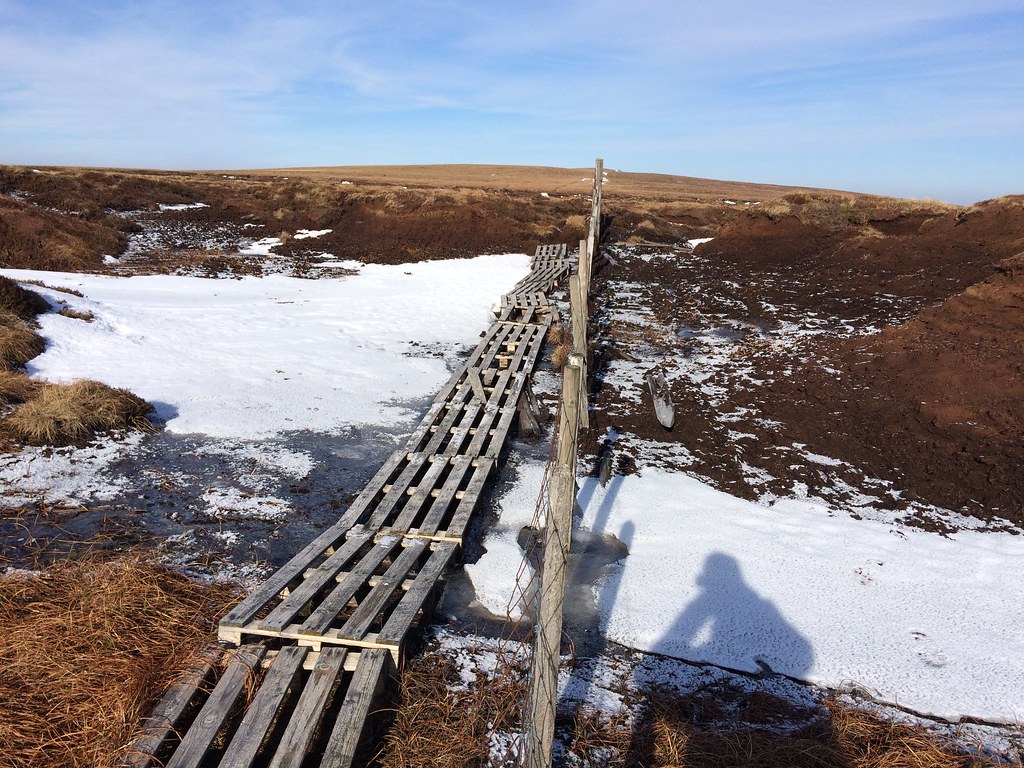 On the traverse to Burnhope Seat. Boards not needed today! 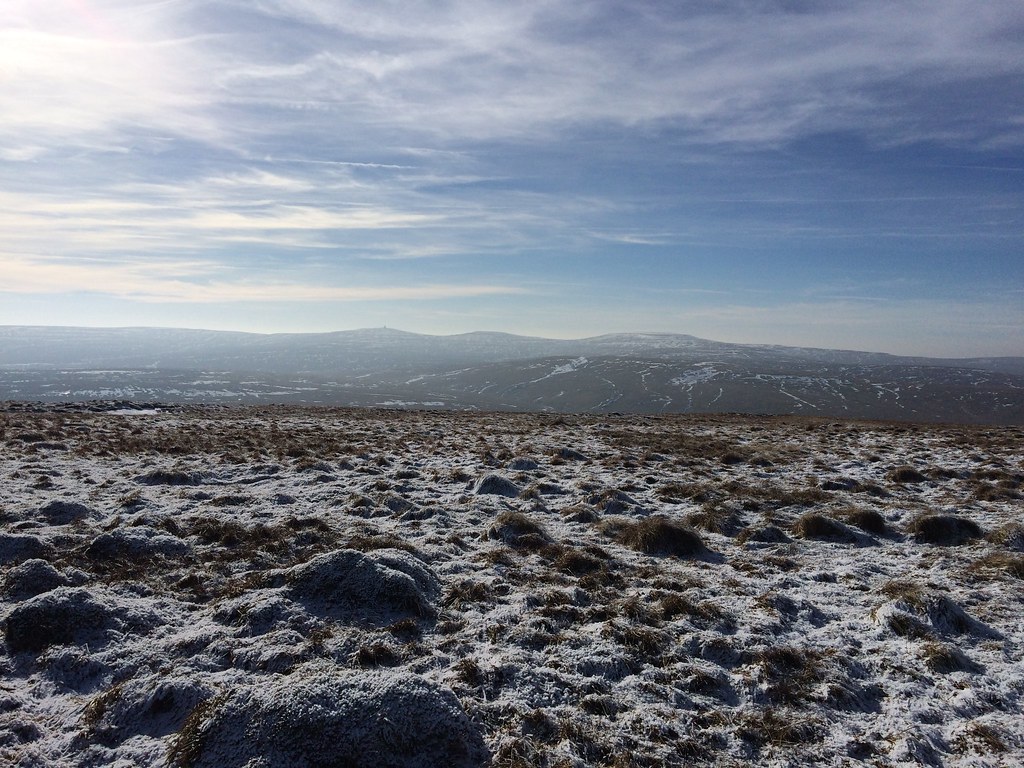 I traversed briefly westwards from the trig point on Burnhope Seat, as the ground appeared to be higher over here, and the views of Cross Fell et al were better. A pleasant enough spot in today's conditions, although less cold wind would've been nicer! 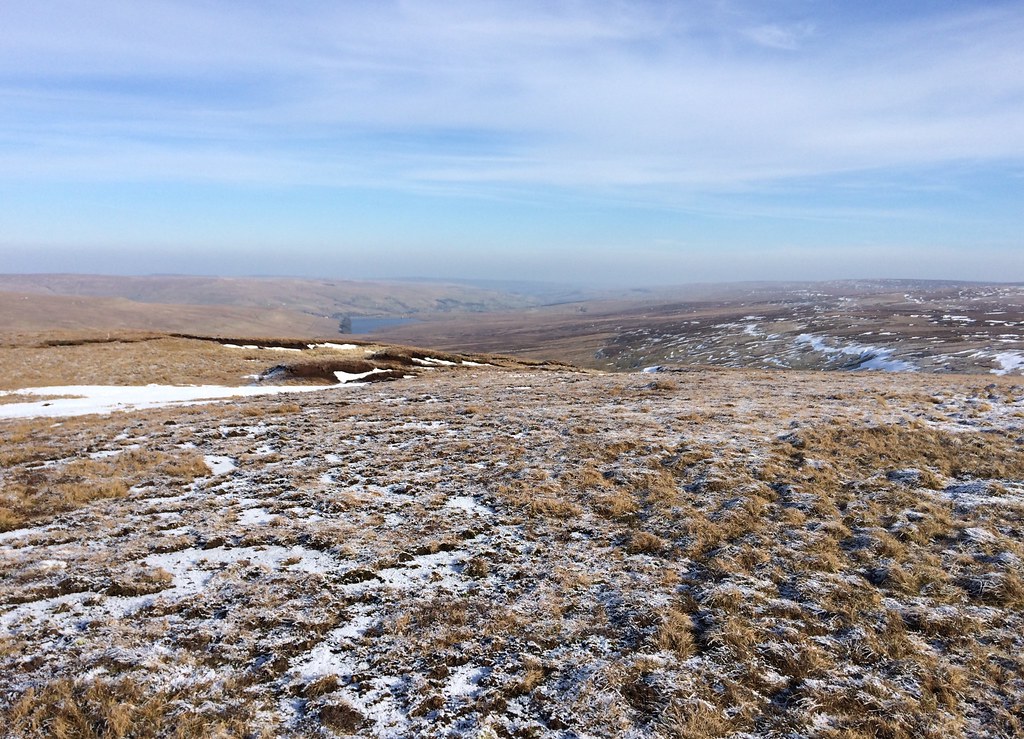 Looking to the route ahead, I could see why many people choose to pick off these summits in small clusters from the nearby roads - this really isn't ridge-walking in any normal sense of the word. ahead lay a good 4 miles of dips, hags and bogs -nicely frozen over, but still not overly compelling. A short drop away from Burnhope Seat, I hid away in one of the hags for some more shelter and a second lunch. 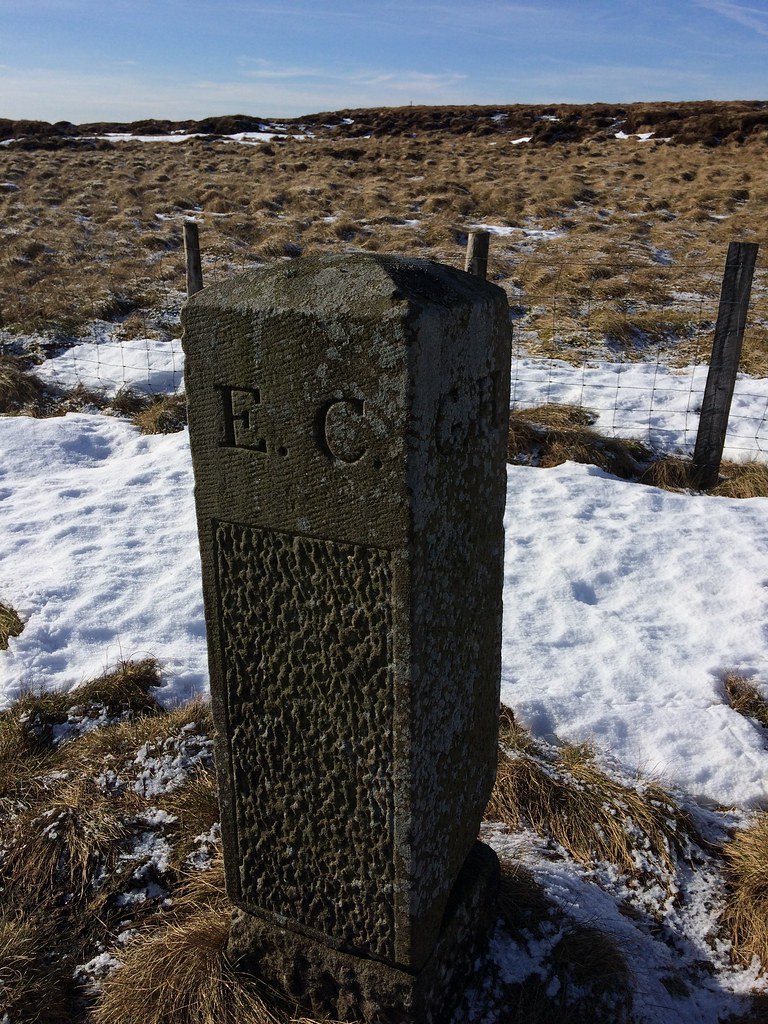 Ther was some interest along the way - an inscribed boundary post on Scaud Hill, some old lead mines on the flanks of Great Stony Hill, and increasingly attractive views down into Teesdale. Great Stony Hill itself probably had the best defined summit of the day. 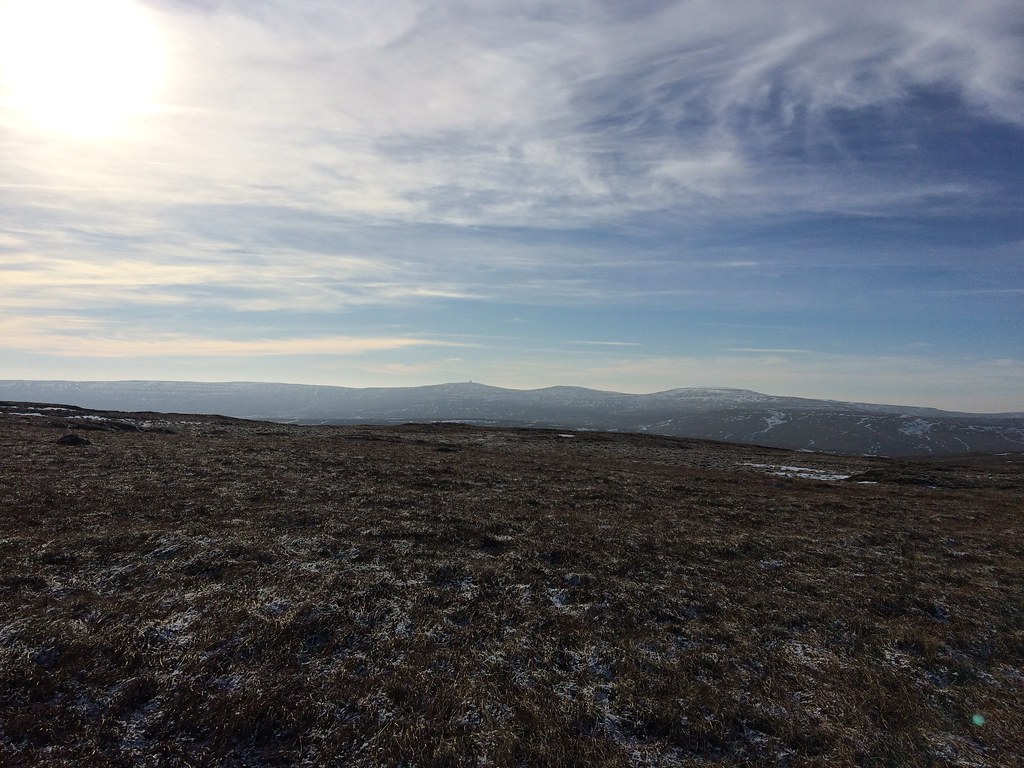 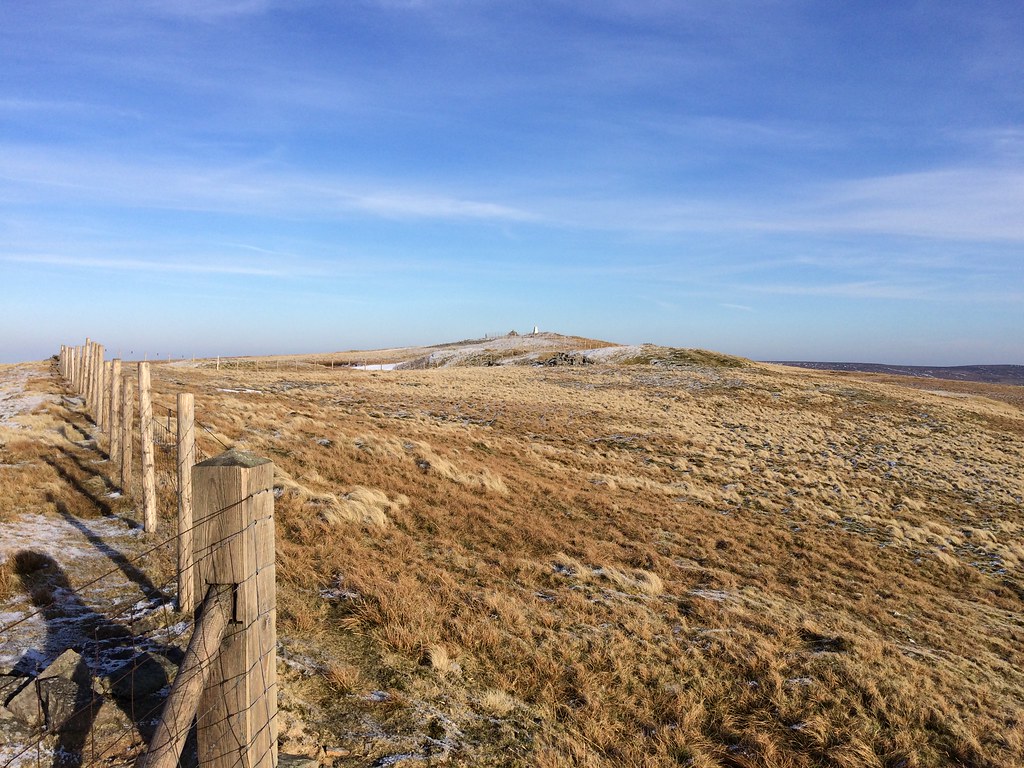 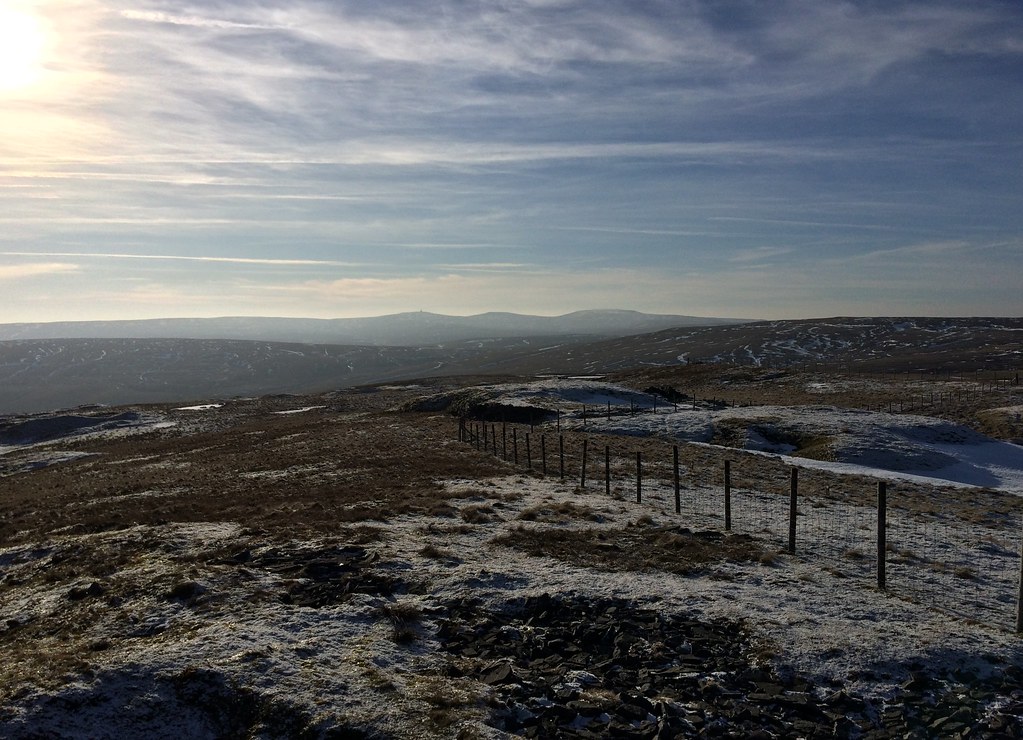 Looking back to Cross Fell etc.

By contrast, Three Pikes was another hag-fest. There was a fair amount of descent to Langdon Head, and then I contoured the southern slopes of Noon Hill to hit one of the high roads over from Weardale to Teesdale. 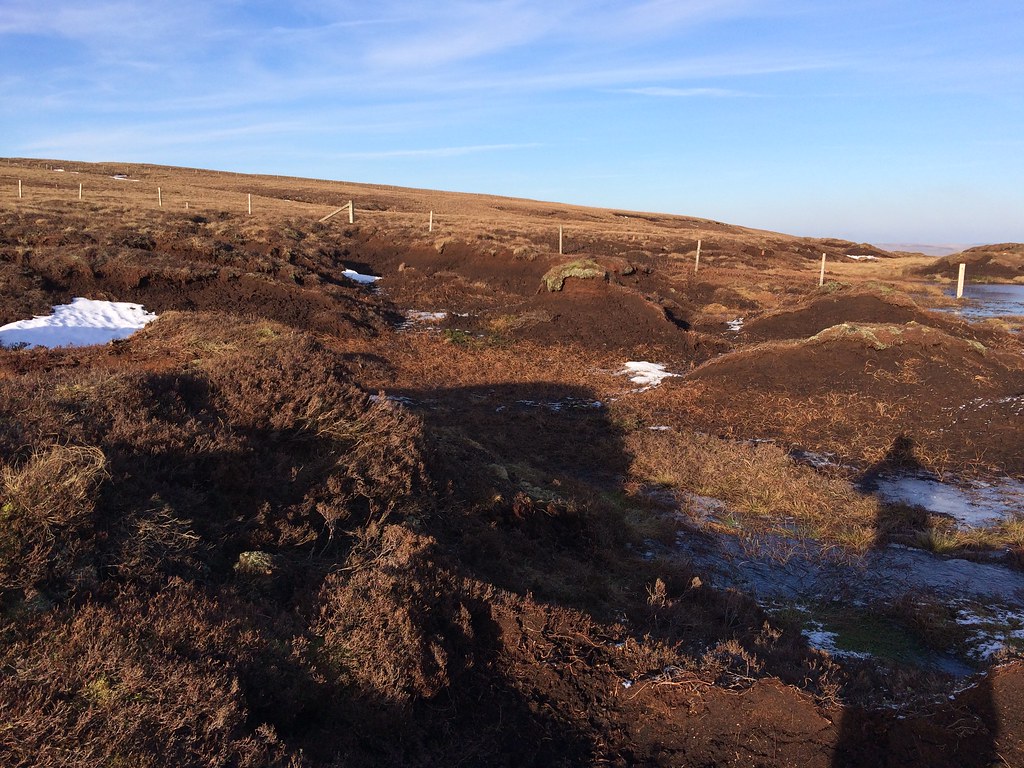 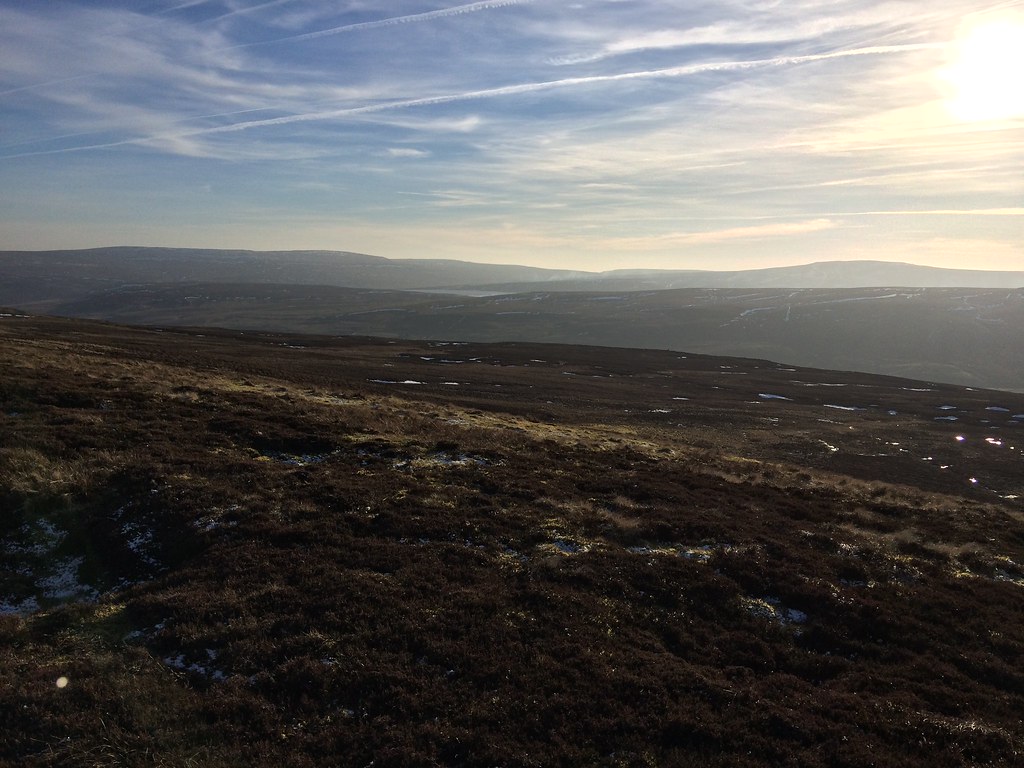 Mickle Fell and a sliver of Cow Green Reservoir 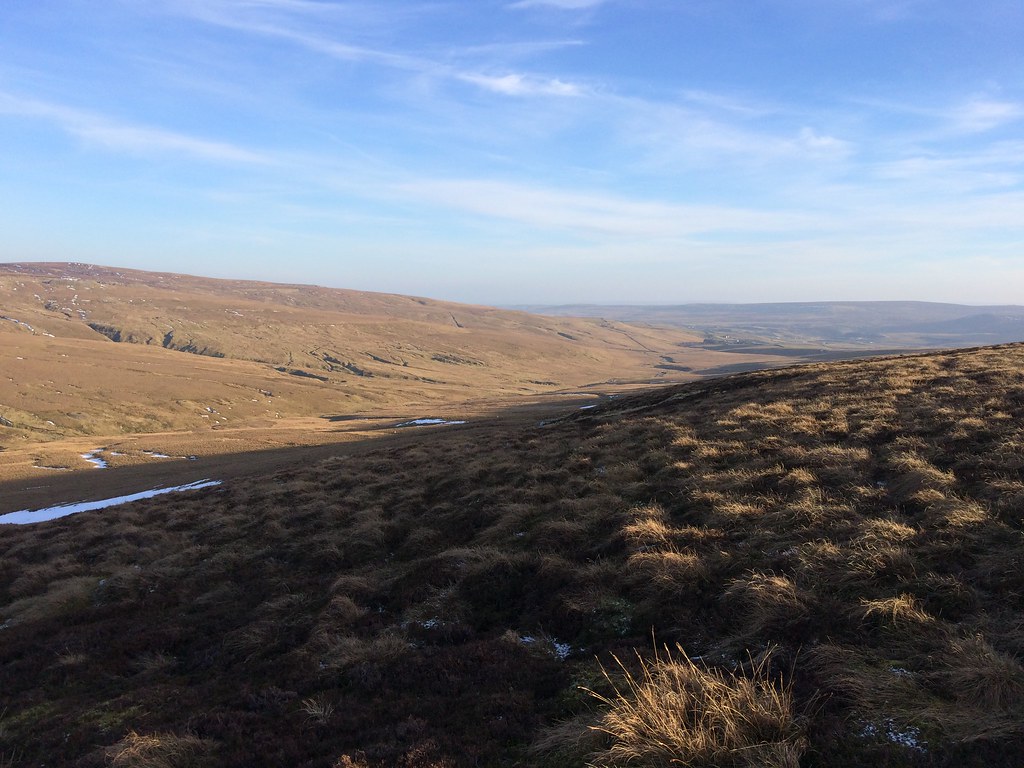 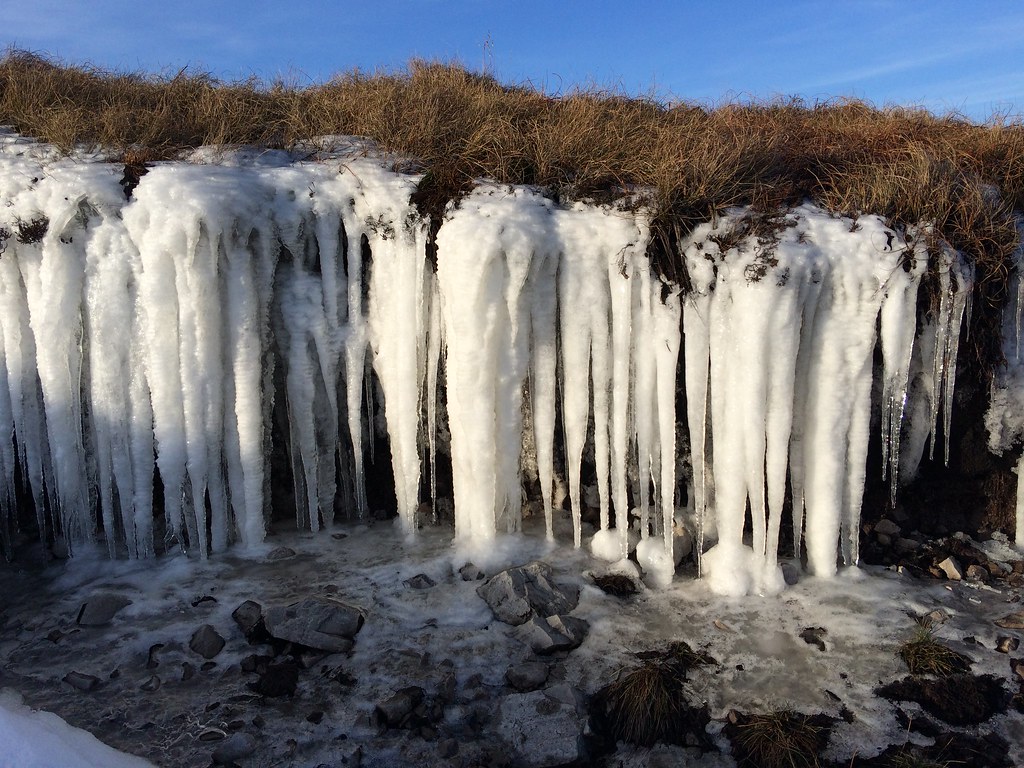 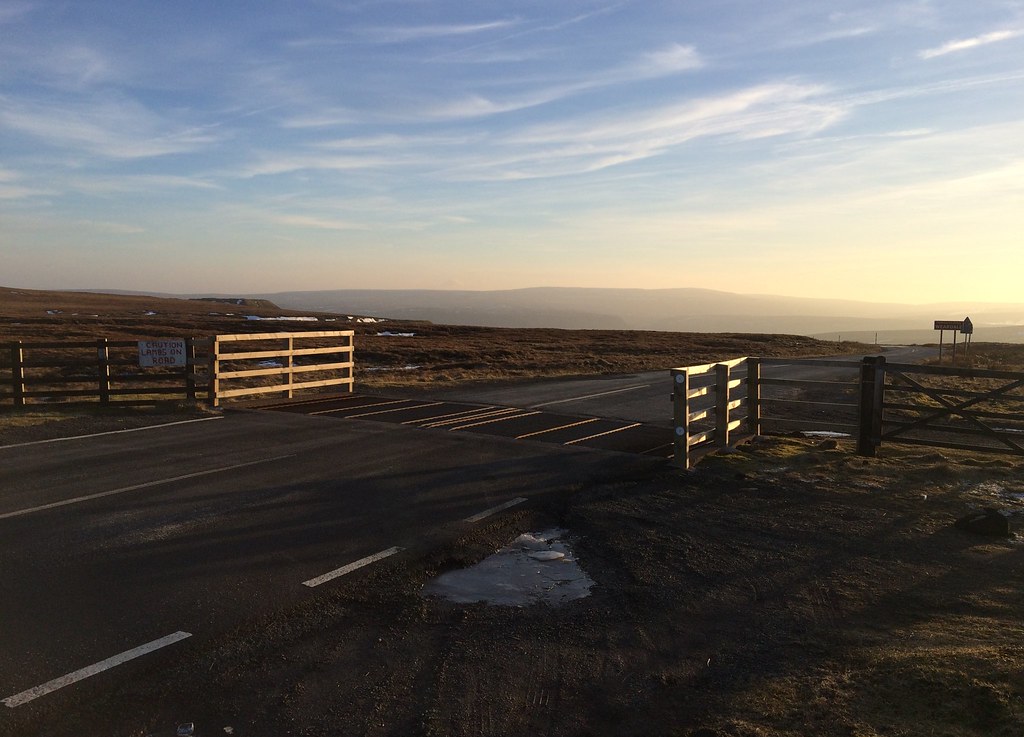 Summit of the Langdon Fell road

From here, the summit of Chapelfell Top looked to be a prominent grassy rise in amongst the hags, but when I got up there, there turned out to be more hags behind! As summits go, probably the most rubbish one of the day 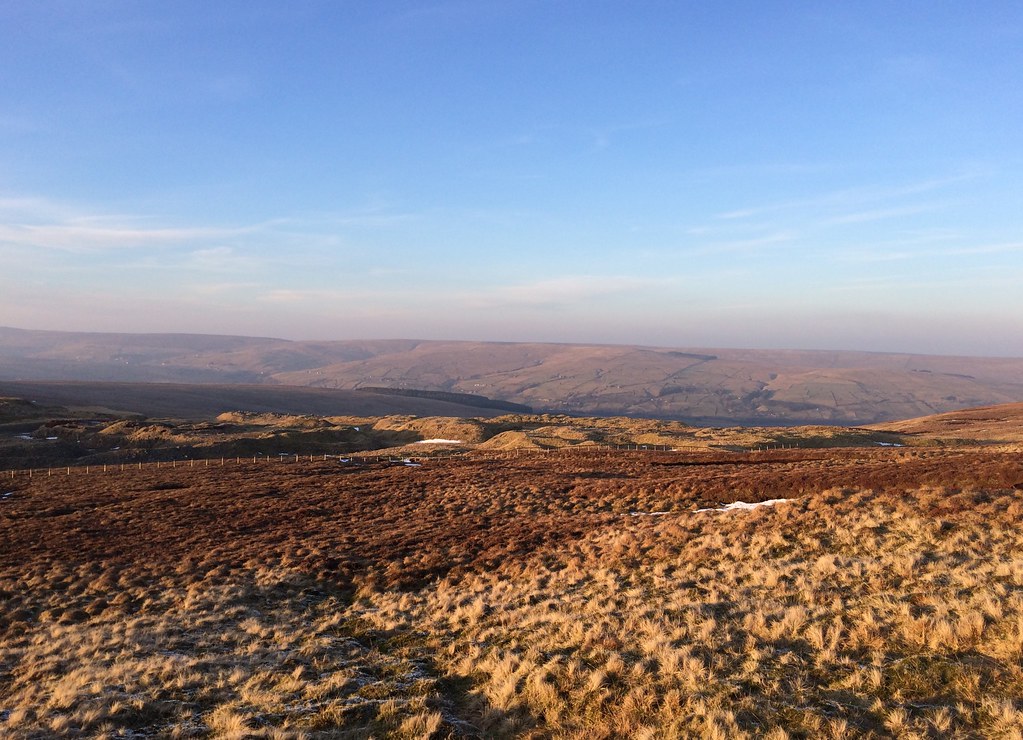 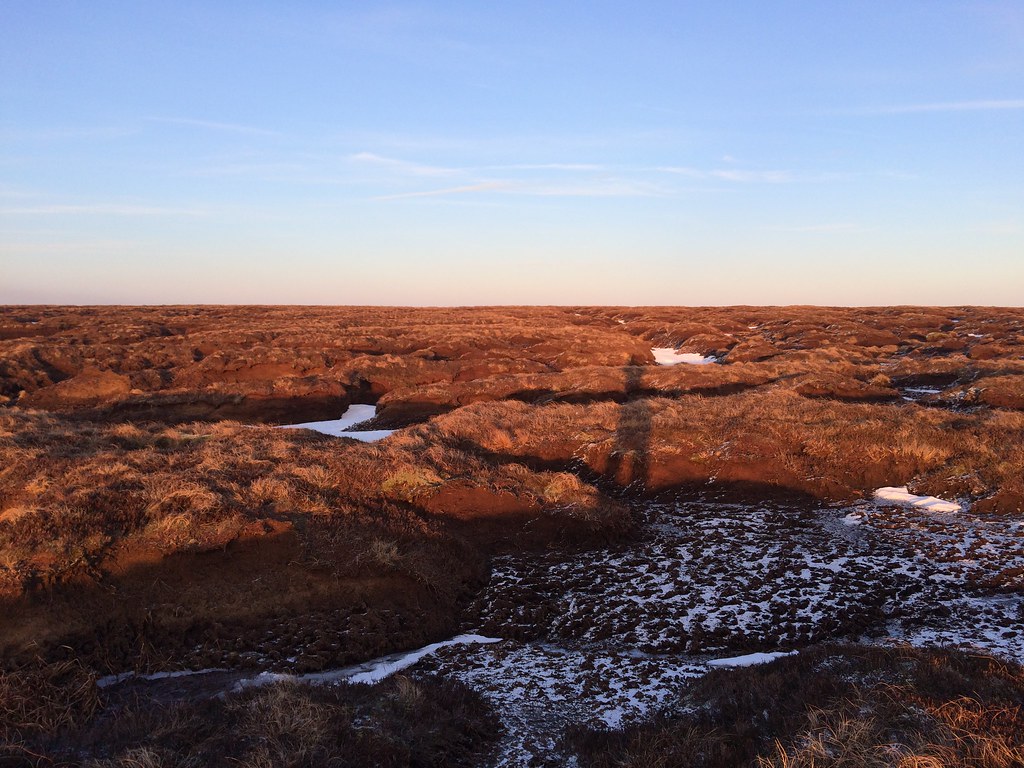 Fortunately, things were better on the descent -mostly easy going mini-tussocks. The sun was setting and upper Weardale looked attractive and peaceful in the last light. I eventually picked up a good track which dropped me thoughtfully right next to the Golden Lion Inn in St. John's Chapel. I had over an hour to spare before my bus, and found a nice cozy spot next to the fire to enjoy dinner and a couple of pints 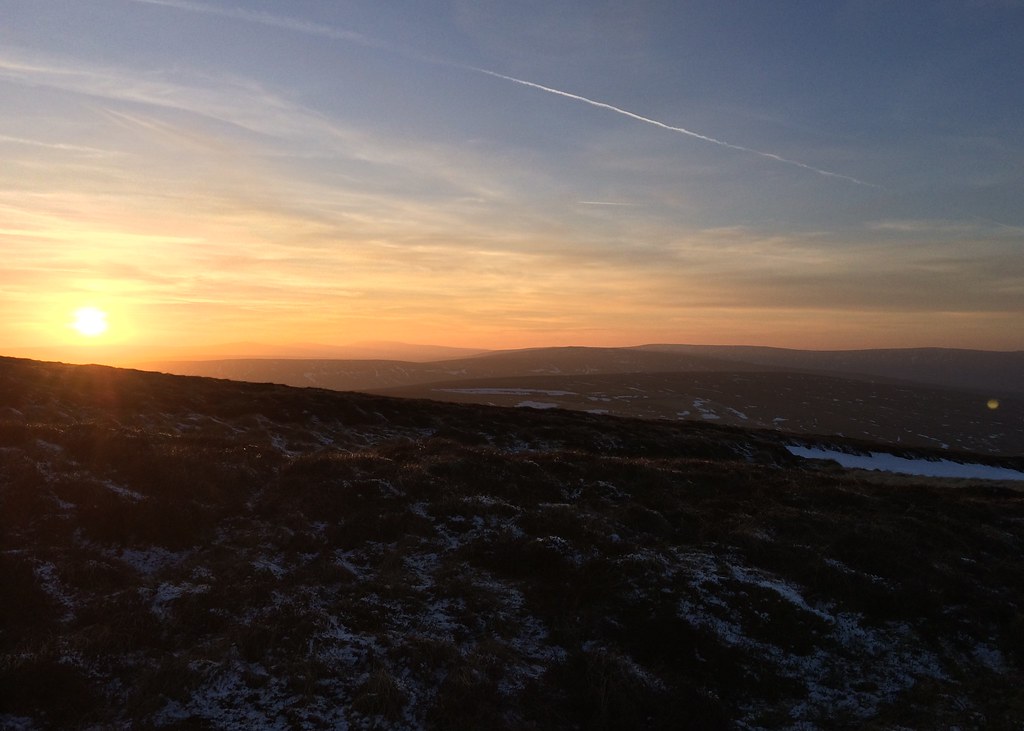 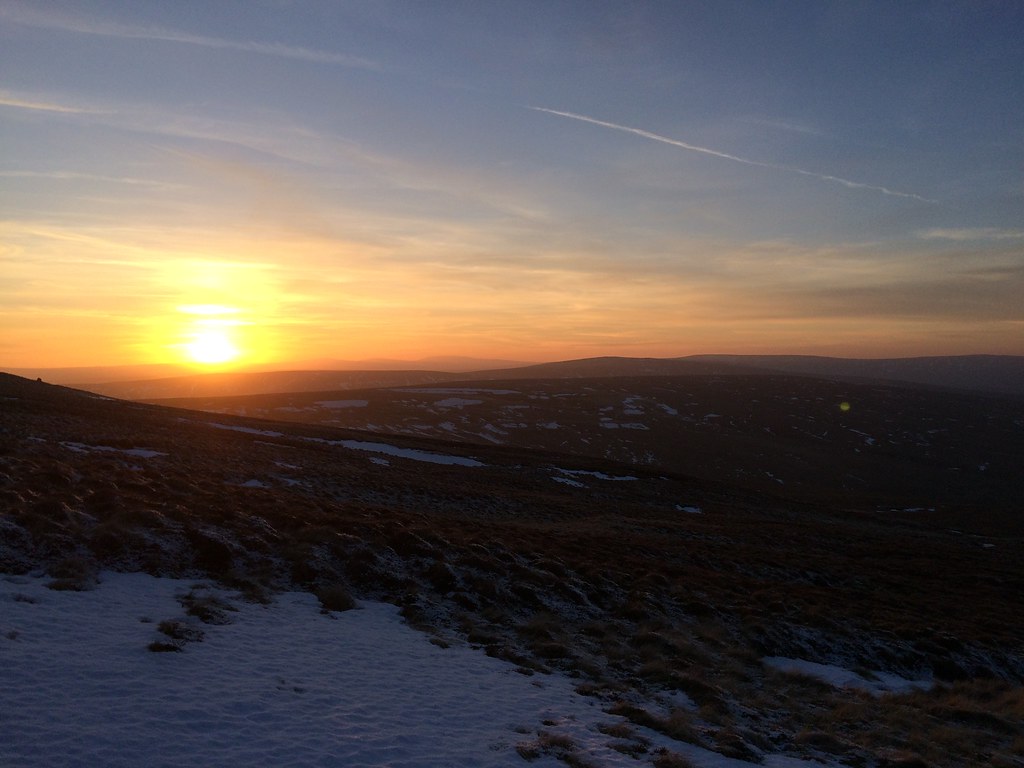 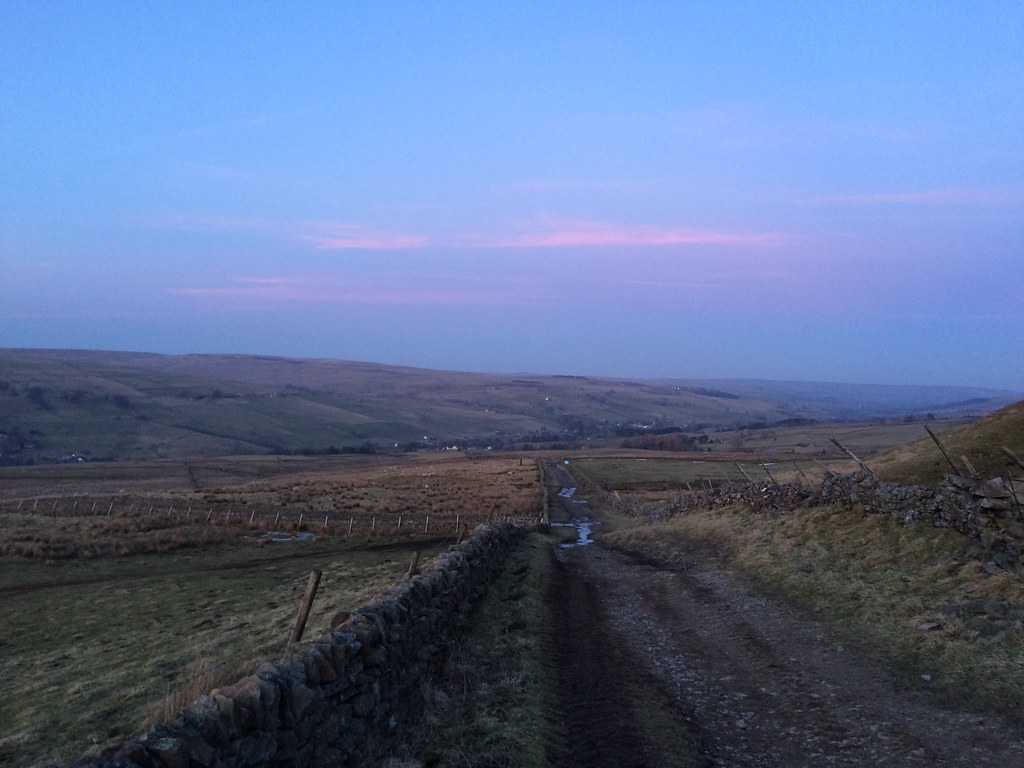 East down Weardale from Thatch Mires 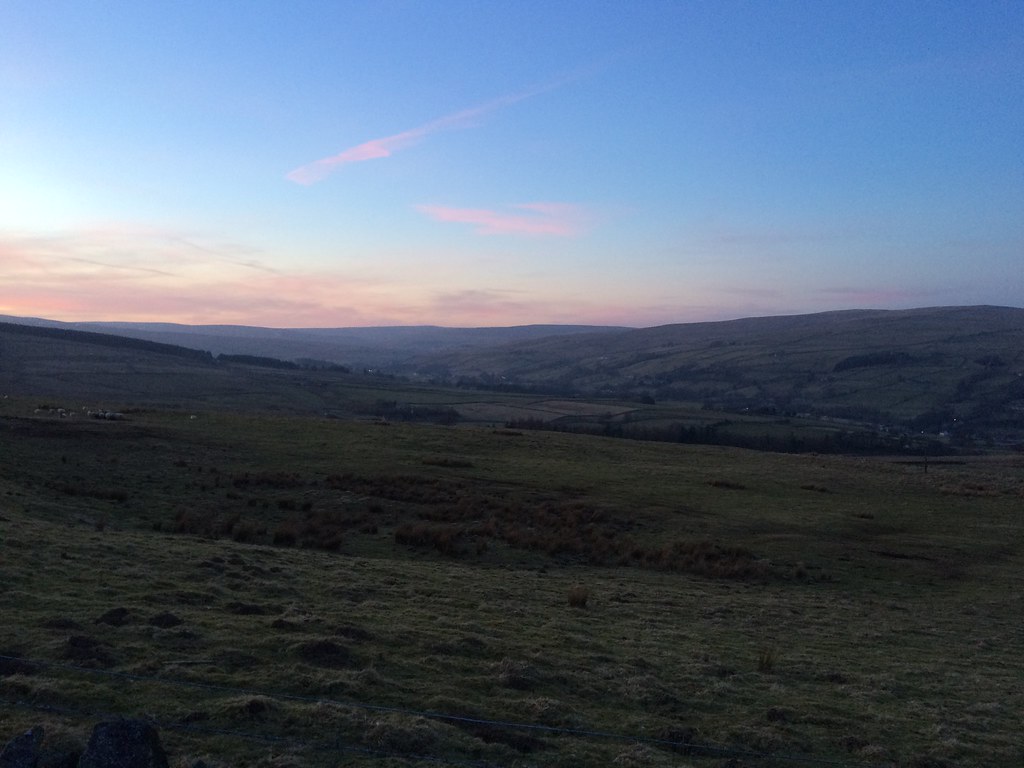 Last light over head of Weardale

However, the rest of the journey highlighted why I really need to start going away for the full weekend, rather than trying to get back to Sunderland on a Saturday night. Although Sunderland was less than 40 miles away as the crow flies, it took me 3 hours to get back there. I had 45 minutes to kill in the freezing cold in Crook (jam-packed Wetherspoons won out over sitting in the bus stop with loads of drunk teenagers), and there was a good old Saturday night fight in the bus station in Durham, before someone puked everywhere on the last leg home. Yuck!

Still, a probably never-to-be-repeated opportunity to see the hills around Weardale at their best can't be sniffed at

If someone asks me what crosses the line of being a fun day in the hills to absolute masochism I'll remember the line "20 mile-plus walk which would be mostly pathless, and mostly over peat bog"

Enjoyable report and a big day

I did a similar kind of distance walk on some of these hills in the past and it's a big undertaking as you say. Not a lot of mega ascent or anything but demanding throughout because of the terrain.

I did it during a drought in summer and it was perfect. Doing it after a wet spell would be masochistic I'd guess!

Top stuff and thanks for sharing.

Even with fairly frozen ground, that's a long walk through peat hagdom! And you did it at incredible speed - you must have been running

. I can see that, with a suitable establishment of cultural, historical and architectural distinction at the end, there's a fair old motivation

Some great pics too - to make even this kind of terrain look attractive. The sunset pics are especially nice.

I've had for some while a not dissimilar type of route planned for this area, but a bit further west, circling Cauldron Snout and High Force; however I hadn't really thought too much about the bog dimension... I think I'll have to wait until well into a summer drought period.

Great effort even with favourable conditions, the only one of those I've visited is Great Stony Hill which I recall was a canny summit. Sorry to here you had to endure the worst of the North East's nightlife on the way home, somethings never change

Even in those perfect conditions that's some very rough terrain for long stretches. I remember the hags between Burnhope Seat and Deadstones being especially soul-destroying, despite the pallets! Probably a good idea to bag that lot in one go to get them out the way.

Glad I'm not the only one who thinks the summit of Chapelfell Top is crap!

At least you got a view though. I went up there on a thoroughly miserable day of dark clag & couldn't see a thing. Spent ages wandering around trying to find the cairn, but never did find it. I suppose that means I'll have to go up there again if I want the tick...

maybe I should have done a winter one like yourself