I had successfully managed to book the Monday off work on the solitary condition that "if the weather is pants I will be in, if it is clear I will see you Tuesday"

As it was an ad-hoc Monday off work and considering none of my mates nor I had won the lottery and retired it was always going to be a one man expedition today. I started off relatively uncertain on where best to go bagging but the clearest visibility was promised on the east side of the country so I was left with relatively few options. By now I was 87 Munros in and the vast majority had been Cairngorm (east-ish) or Monadhliath based. Geal Charn was another one of the hills that provided an element of "annoyance" as it takes a long time to get to just to notch one more hill off the charts.

This particular Monday in The Great Winter of 2017/18 (very subjective but I have enjoyed and we can not complain about a lack of snow!), was an off day and vast sections of snowfall had melted leaving only the highest of tops covered and below freezing.

Setting off from Aberdeen at 05:00 with the anticipation of a long drive and equally long walk I wanted to make sure I had nearly every available hour of daylight on my feet.

The first challenge of the day arrived when I had just turned off the Laggan road and was heading along the old military road - the River Spey from the Spey Dam appeared to be on the brink of bursting its banks and the little Polo was wading through what looked like a never ending stretch of water at least a foot deep. Once through I made the assumption that it was only going to get worse but I could look for all alternative route out. That bridge (or lack of bridge) was to be crossed after the hill!

Whilst driving alongside / through the River Spey, daylight appeared to hit instantly and the hills were covered in low lying clouds and looked suspiciously mischievous - it certainly gave me the moment of self-doubt, i.e. why am I actually doing this alone. I could still be in bed awaiting anxiously to hear the great excitement from all my colleagues weekends

Strange thought considering when I started Munro Bagging the vast majority of some of my longest and most navigationally difficult outings were alone. Since then I have picked up a good core group of similar minded [insert non-offensive word to describe the troops].

River Spey in full flow at the Garva Bridge 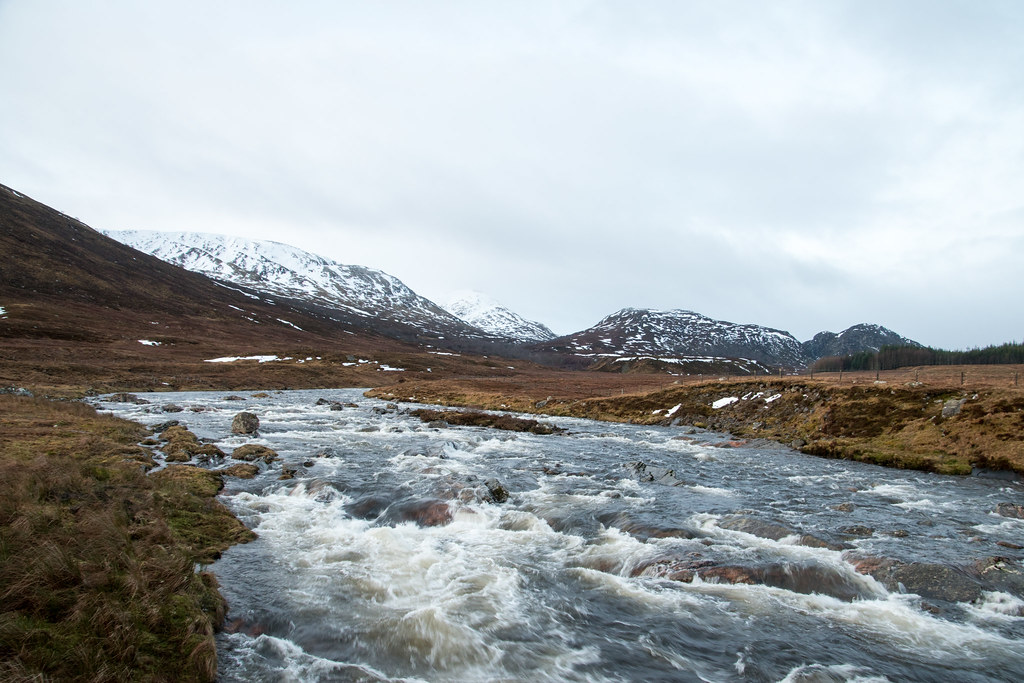 Could have at least turned around - never mind! 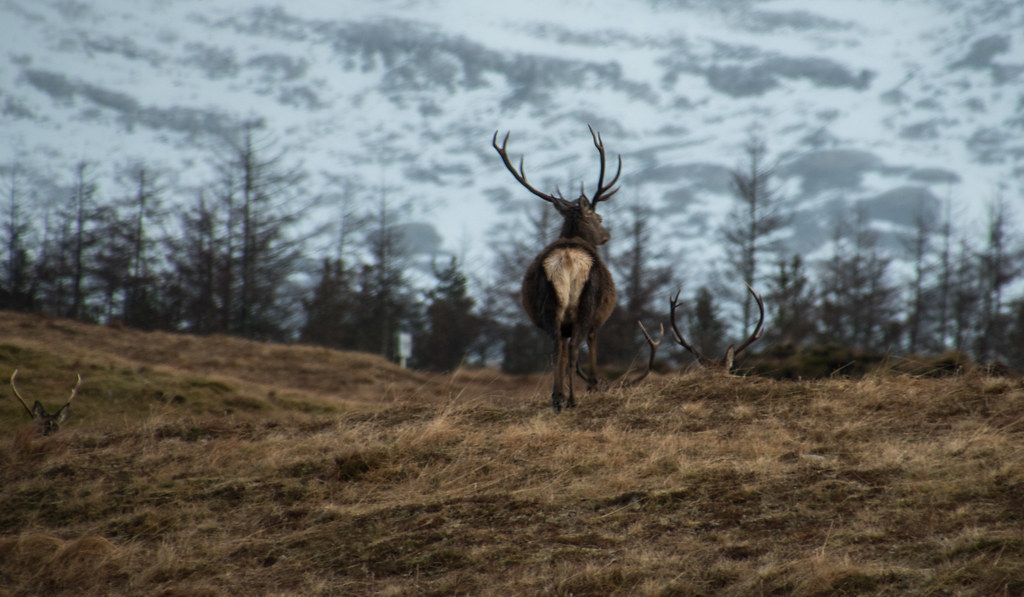 Still concerned about how long today might take and unsure at how difficult the burn crossing would be I was eager to set off and hold a quick pace. Once I had passed the industrialisation for the new pylon infrastructure it instantly felt very remote. The Mondhliaths or Cairngorms might not have the spiky sexy ridges that the north west boasts but they have a unique character I have began to feel loyal to! 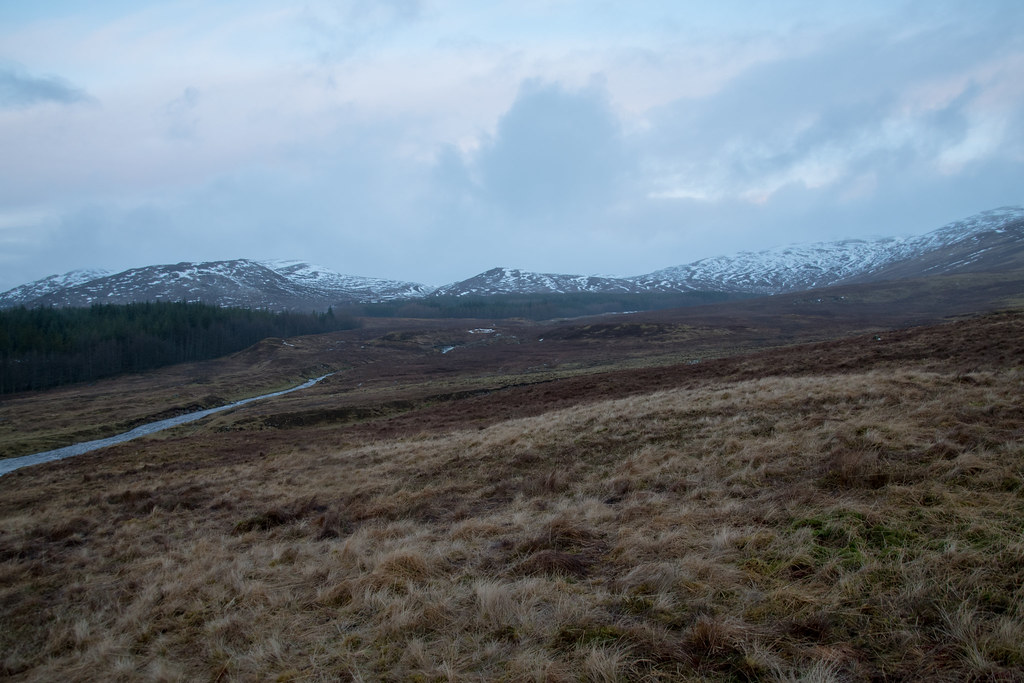 Making good progressing. Looking back at hills behind. 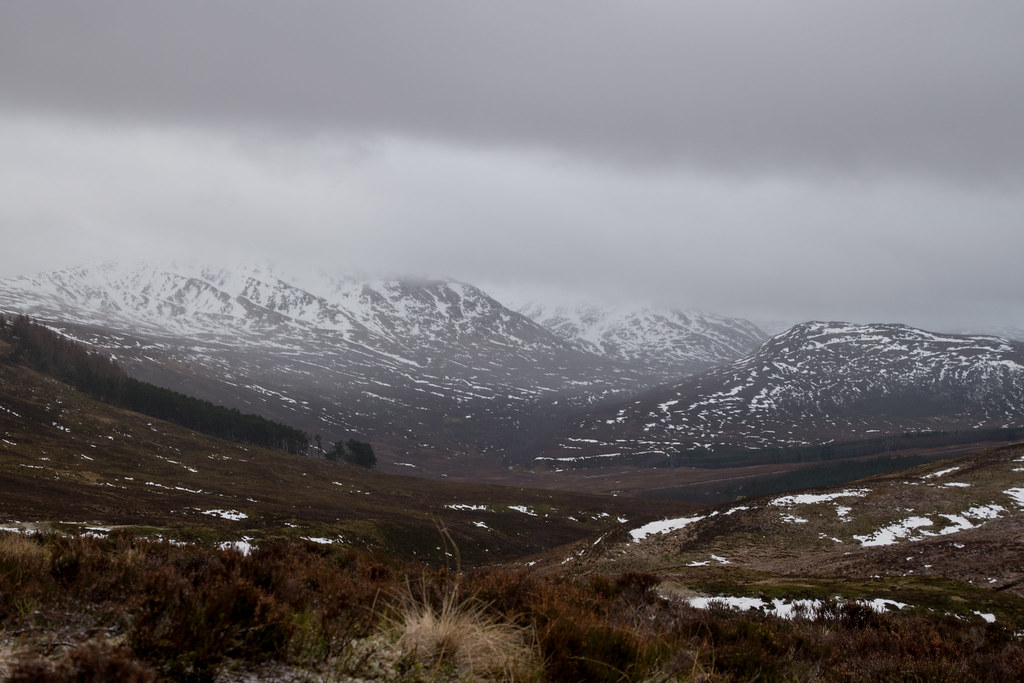 One benefit of being out on my own is that I always tend to go quicker, not that others hold me up but probably more down to the fact that I talk less

Before long I was following the burn (Allt Coire nan Dearcag) up towards the bealach between Geal Charn on the left and Beinn Sgiath on the right waiting for a suitable opportunity to make my crossing. With the heavy rain that preceded my outing and with the melting of vast proportions of snow this was almost guaranteed to be the biggest challenge of the day.

No chance of getting across anytime soon! 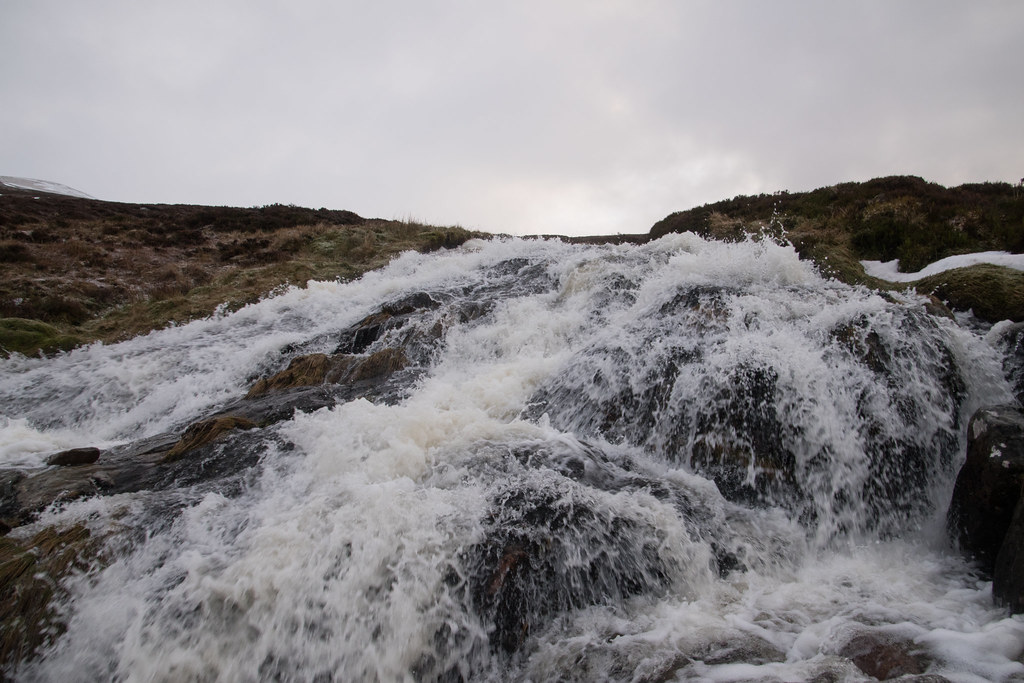 Very unstable balance on the backpack... 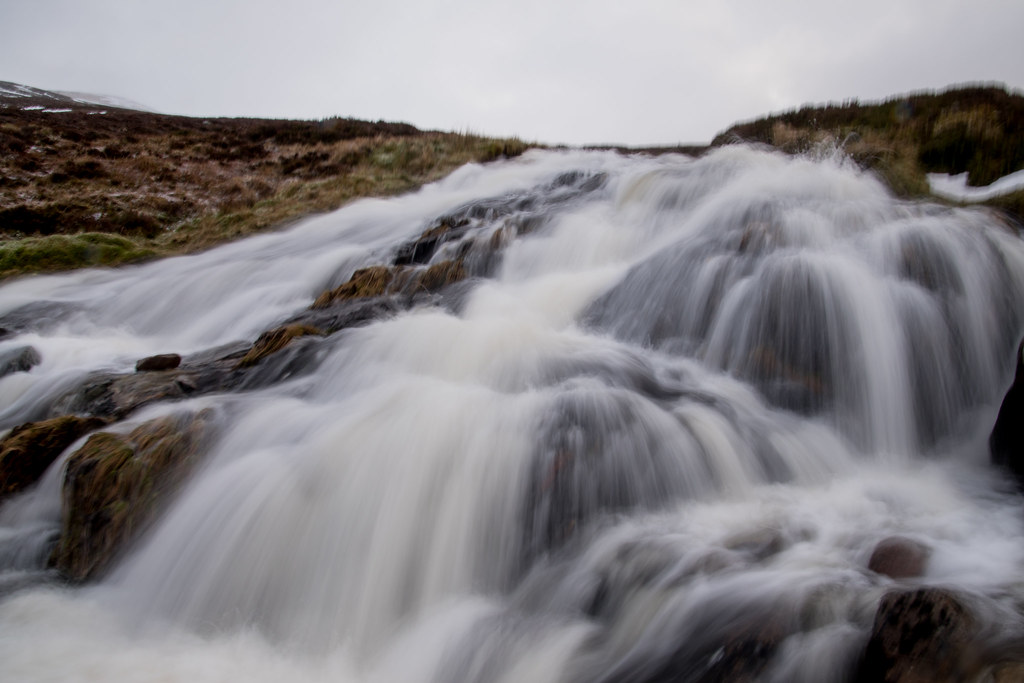 After detouring much further up the burn than hoped for I managed a quick hop, skip, (stumble) and jump across the water. The weather looked to be clearing up at the summit but clouds were moving at lightning pace so I didn't want to dilly dally anymore than necessary.

Sense of the weather window - small! 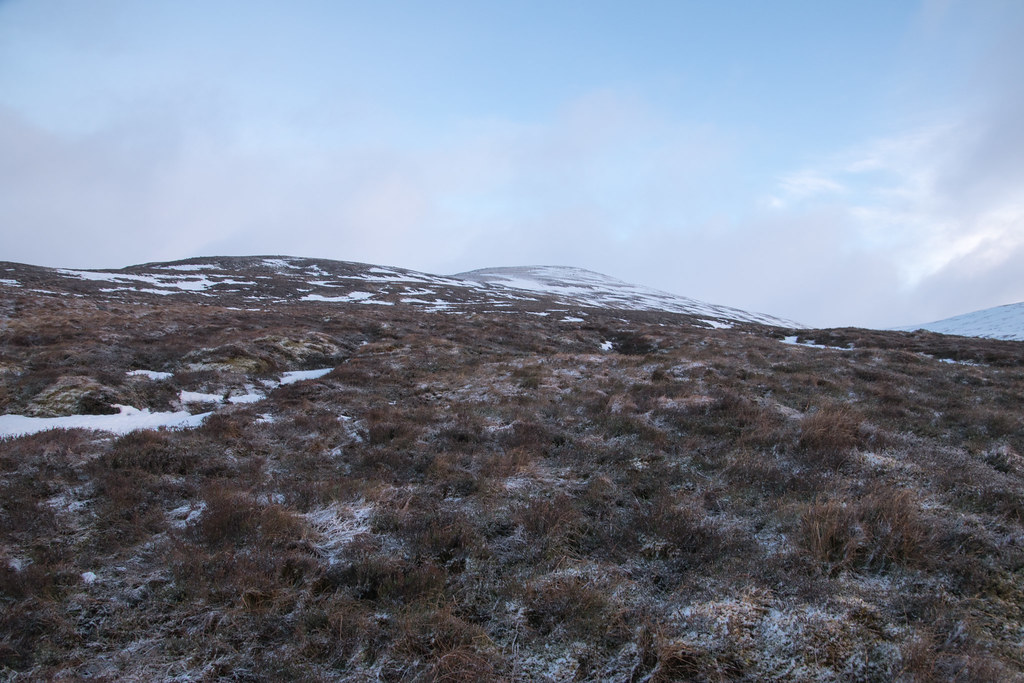 The views around, particularly looking back on the mornings walking were beautiful. The clouds were floating gracefully over the tops of some of the higher peaks in the distance but they weren't frightened to occasionally swallow a hill and remind me for each minute I spent farting about with a camera my chances of a cloud free summit were reducing. 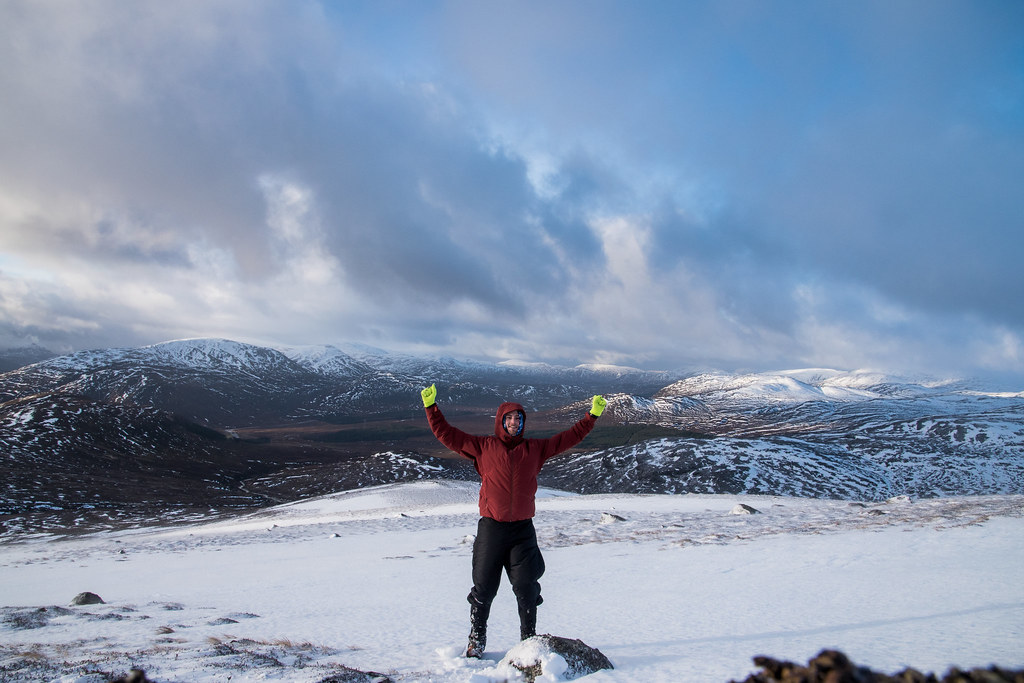 View without the numpty in bright gloves! 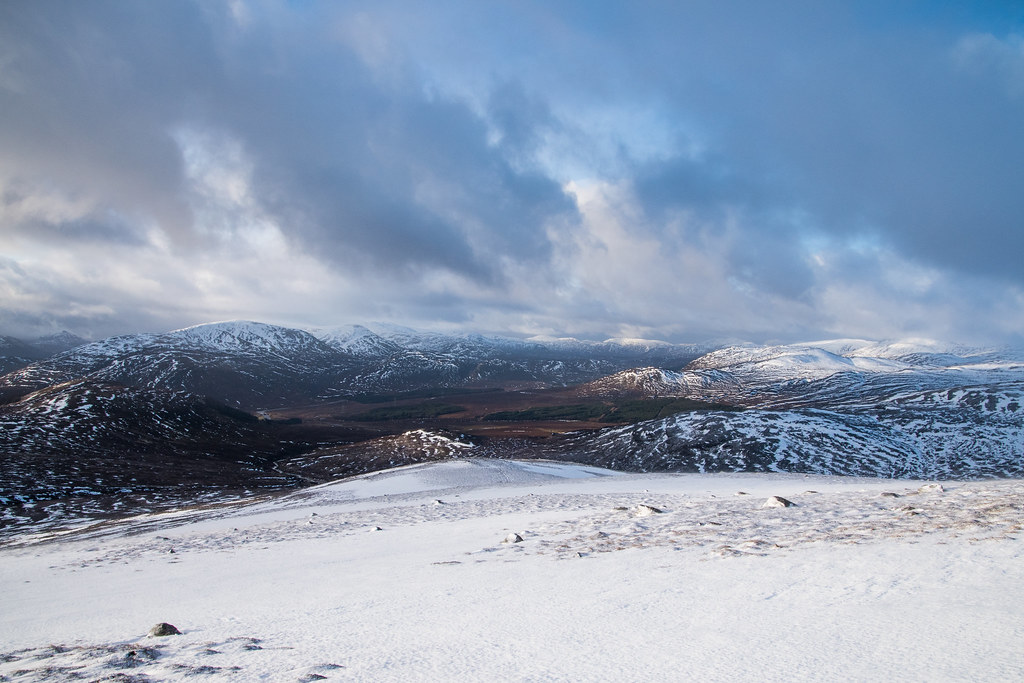 By 10:45, 2.5 hours after setting off I was at the summit of Geal Charn. The panoramic views were impressive but the wind chill factor was picking up. I had full singal so made a quick FaceTime to announce safe arrival at the top before the battery on my phone instantly drained away

Nothing beats a sunny summit 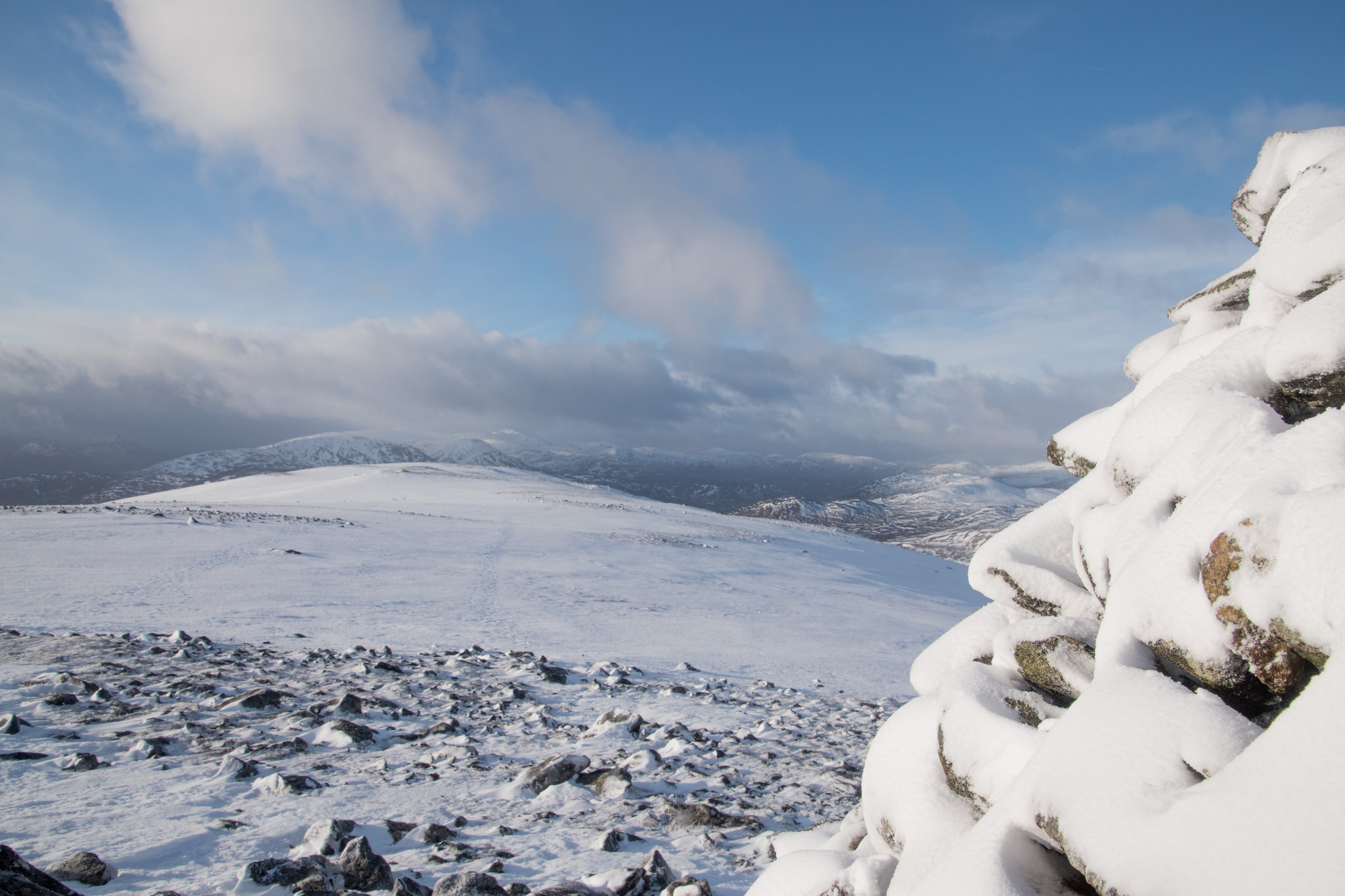 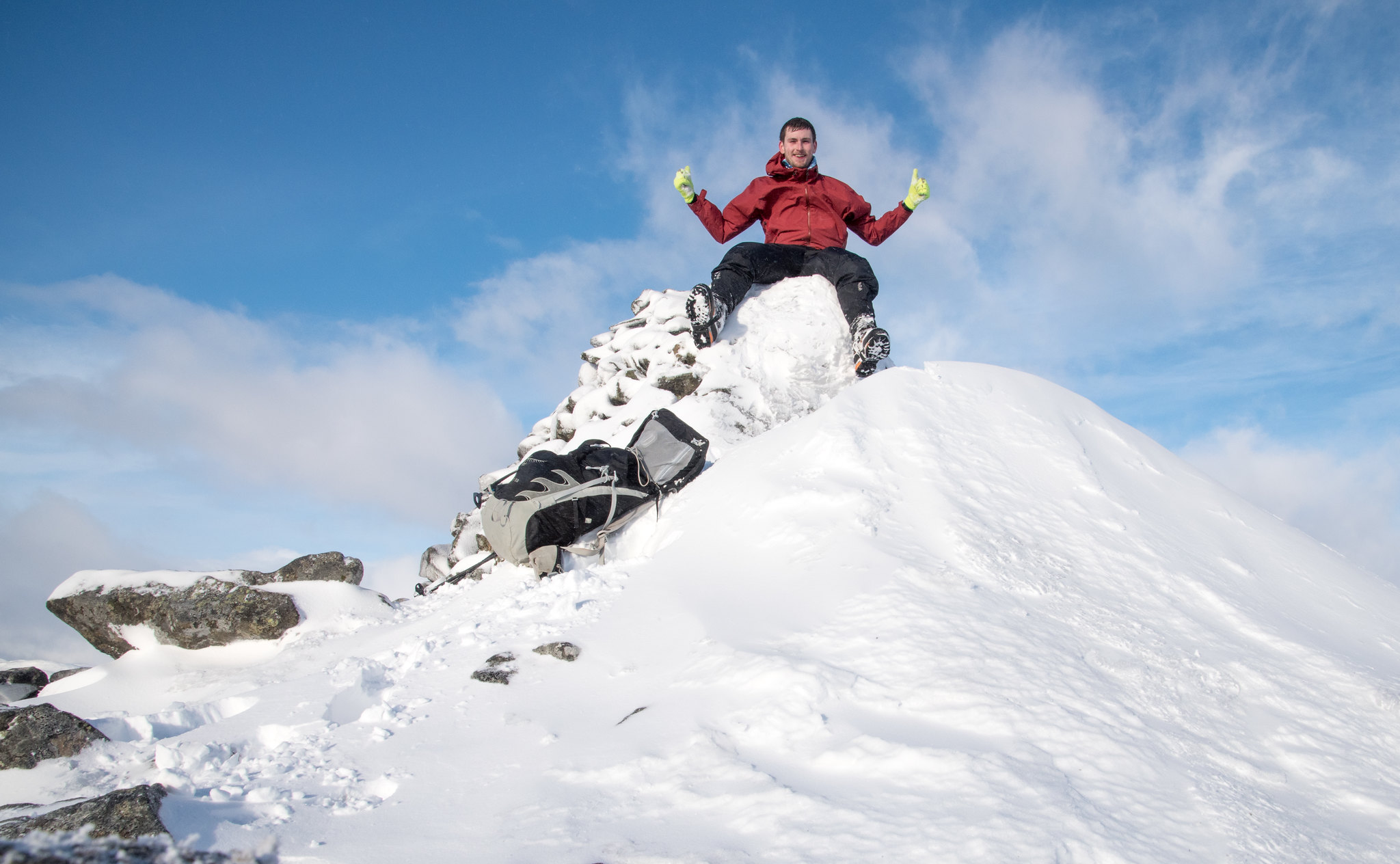 The route back down is as straightfoward as it gets, I was just trying to keep as straight a bearing as possible to make sure I hit the burn at a suitable crossing point. By the time I was nearing the pylon project the weather window had firmly shut and snow was beginning to flurry down.

Weather waits for no man! 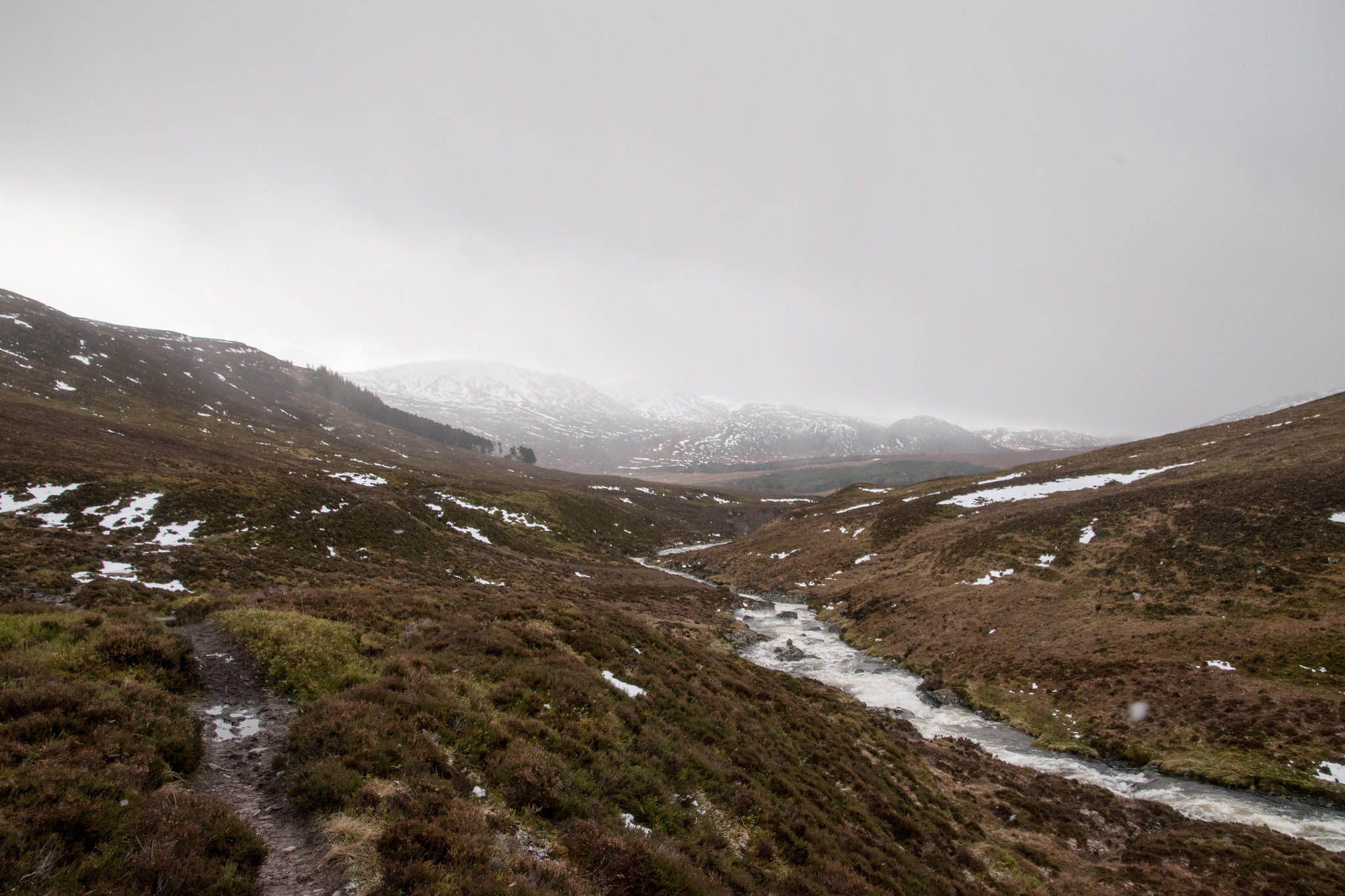 The Cairngorms - and another shift in the weather! 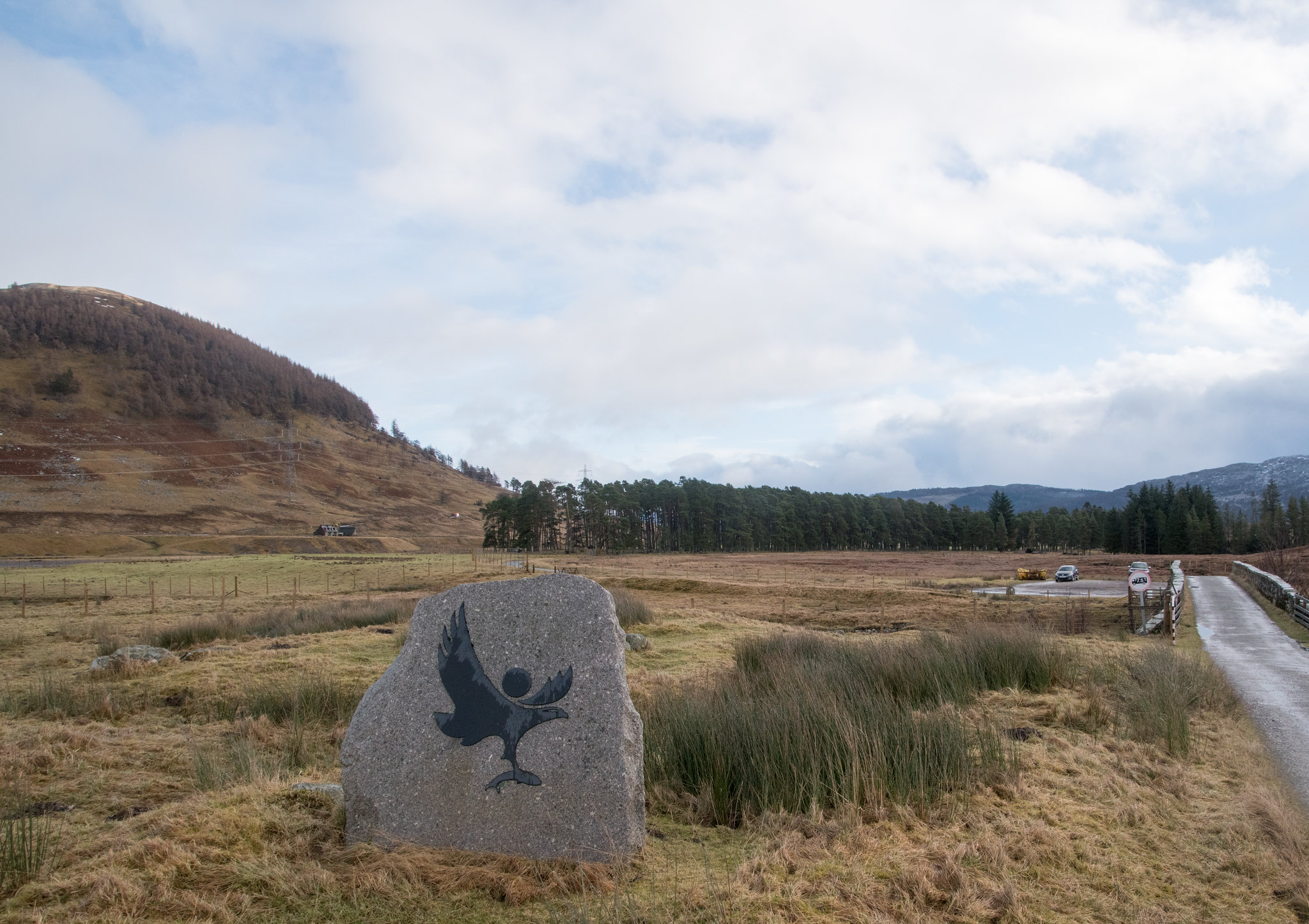 I was back at the car at 12:15 - almost regretting such an early start but also delighted to know if all went to plan I would be back past Dyce and into Aberdeen before the afternoon driving mayhem commenced!

Suddenly when sitting down in the car I remembered the flooded road on route to the start car park, but considering there was now one other car parked up, albeit set far higher off the ground, I assumed it would be okay to pass by now...

Not overly convinced I set off anyway to find the water had retreated completely off the road and all that remained was for another long drive back to Aberdeen.

I may have described Geal Charn as an "annoying" hill, but all in all it was another brilliant day out on the hills!

88 hills down and a mammoth 33 Walk Reports completed - time to get through some of the backlog!!