So what do you call a walk in sub-zero temperatures that begins with filling one of your boots with water, sees you rip your gaiters with crampons, and break both walking poles at the end?

Let me explain...having failed to complete the Ring of Steall in murky February conditions a few years ago I wanted to do it properly. I was unfit before and we bailed out early as we realised we would run out of daylight. This time I had to do it quicker. So I chose one potentially good day and got to the car park early.

Setting off at 8am, all was fine. Blue sky, no wind.

The water slide coming off the Ben was mercifully small: 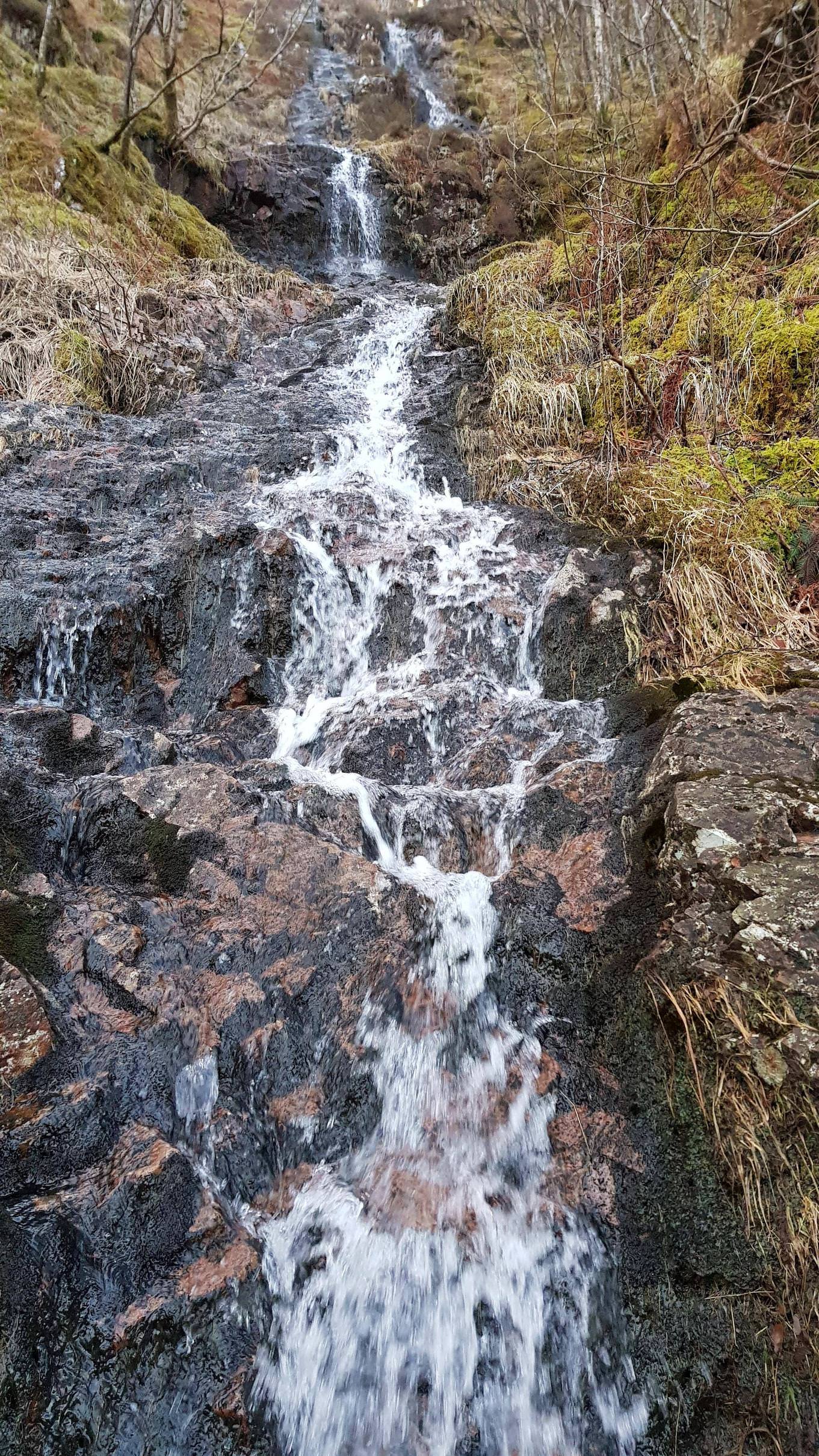 Heading over the wire bridge was easy, met a party of school kids at the hut, and it was going fine until I got to Steall Falls. I hate Steall Falls.

No really, I hate Steall Falls. It's pretty, but damn difficult to cross.

It was way too icy on the rocks to hop over so I had to remove my boots and wade.

Standing on freezing rocks in bare feet is unpleasant. As my feet began to say "we're going to go numb soon" I made myself step in....and promptly dropped a boot in the water.

Rescuing the boot from being swept away, I wondered if the school kids heard me yell out some choice Anglo-Saxon. Probably. I didn't care.

So now I've got freezing feet and one wet boot. "That's it, I'm going home" I thought, and swore again for good measure.

Fortunately today was a fresh pair of waterproof trekking socks so as I struggled to put my boots back on I realised my right foot was not an instant quagmire. Stubbornness got the better of me and I tried crossing on rocks further downstream.

This time I made it, just. Then after crossing the awful boggy ground a bit further on (can someone please put stepping stones here?) I finally began to make my way up the mountain. I left the car at 8am. It was now 9.20am and time was ticking away.

I powered up the first bit, thinking I could make up time. So busy was I that I forgot to turn around, but when I did, I saw this: OK not bad. A helicopter swooped in to the north face of the Ben to pick someone up. Quite early in the day for it.

Piling on, I got to some avalanche debris: Fortunately the footprints did not end at the debris, in fact they gave me some nice stairs in the frozen snow for me to climb quicker.

Taking a slightly steeper route to normal I got up onto the shoulder of An Gearanach and got this breathtaking view looking further up Glen Nevis:

Wow. Just wow. So I headed on up to the top of An Gearanach, now feeling a lot better.

Someone had been up here in much softer snow and their footprints were helping immensely.: When I got to the top I had my first ever view right across the Ring of Steall:

Making my way over the scrambly bits was not too difficult. It was here that I tore my crampons whilst not paying attention. Still, the snow was very firm and the wind was so light, it was hard to get annoyed.

In my head I was thinking "get to Am Bodach by 3pm and you can still escape in daylight". But as time wore on the estimates were being beating handily.

Looking ahead, the steep climb up Am Bodach was still looking nasty, but I got a nice view over towards Kinlochleven: Whoever walked the day before me left some giant footprints and I marched up Am Bodach and got there by 12.30pm. Way ahead of schedule. The poor person with the soft snow would have had a markedly different experience.

The view from the top of Am Bodach was suitably breathtaking:

After a nice lunch of Marmite sandwiches I wandered further round. This wasn't the fearsome Ring of Steall I had feared. The snow was in perfect condition and the winds were light, plus in the Sun it was almost warm. This was an easy day and I was loving it.

Further round towards Sgurr a' Mhaim there was a great view of Stob Ban and its northern ridge (which isn't a bad scramble in winter itself):

Dodging cornices on the Devil's Ridge I finally got to the top of Sgurr a' Mhaim around 3pm. I'd pretty much done it and way faster than I thought possible.

I was so excited I nearly considered joining the bum sliders: Fortunately common sense got the better of me and I stayed safe.

Met a very nice chap called Martin from Shropshire at the bottom of the hill who was there with a group. He kindly gave me a lift to my car and it was only when I got back to the hostel I realised the bottom parts to both of my poles had dropped off....somewhere. Maybe they fell off in Martin's car? Impossible to know. But thank you Martin for being so offering a lift. Also thank you to whoever struggled round the Ring of Steall the day before and broke the trail.

Addendum: has anyone noticed just how massive Bidean looks from this direction? Must have taken some determination to carry on after the boot-dunking episode! I thought my toes were numb after wading the same stream back in March 2015, but clearly that was nothing

We were hoping for similar snow conditions but there was a disappointing lack of snow on the western slopes. Looks like you caught the Ring in perfect winter conditions - a rare treat! Cracking photos too.

Having fallen in the Steall Falls and enjoyed the feeling of my rucsac and every item of clothing filling up with cold water in seconds I felt your pain. The only positive was that I didn't smash me head when falling