Yet another fine winter day of 2018 - and a cautionary tale

Yet another fine winter day of 2018 - and a cautionary tale

The forecast was just too good to miss this weekend, so despite being busy with other things, we managed to find time for a Sunday walk. As usual, the plan was fluid, as in we didn't have one, until I picked Steve up in Penrith and asked 'where to' as we were driving out of town. The options were quickly narrowed down to Dollywaggon Pike or Great End via Cust's Gully. Steve and I first did Cust's Gully in summer conditions in about 1981. Snow conditions should be just about perfect today to avoid any tricky bits, so that's what we decided on. However we found out from a passer-by later that we'd actually been calling it the wrong thing for the last 36 years. Apparently the right fork is Cust's Gully and the left fork that goes under the chockstone (which is what we did) is 'Window Gully'. Not sure if this is true - can anyone confirm? But I think I'll probably just soldier on and call it Cust's Gully for now, 36 years is surely enough for it to become fossilised..at least for me. As usual, we took the more interesting route up via Taylor Gill. Beautiful view from the Band, looking towards Styhead Tarn and Green Gable. At the first snow slope, we decided to don crampons - Steve strapping on his 1945-era ones. And me snapping in to my modern ones (in about half the time, but I'm not rubbing it in). The snow was absolutely perfect - hard neve - for cramponing (although previous footsteps are still more comfortable on the calf muscles). We just had to hope there was enough of it in the gully to make is straightforward. Great Gable in the background. 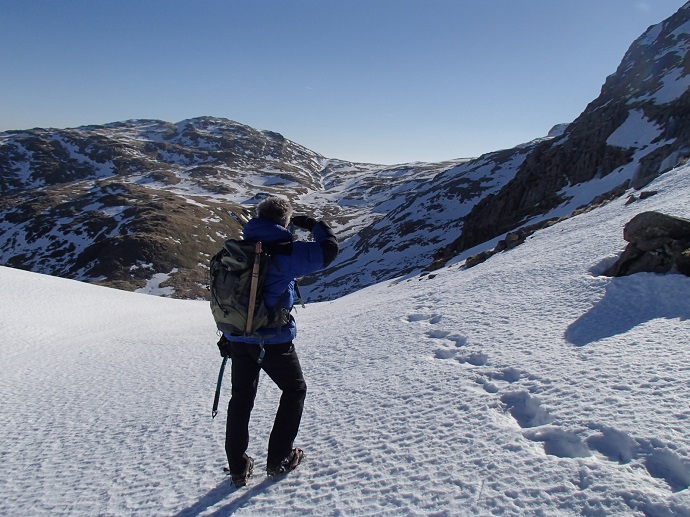 Where to from the top of the bottom section of the Band (near the top of Skew Ghyll)? It was actually quite an airy and steep traverse down and around to the bottom of the gully. Ok readers - Cust's or Window Gully? We took the one with the chockstone on the left. Spectacular view of a frozen Sprinkling Tarn from just below the chockstone. So this is probably more technical than a 'walk', but in these perfect conditions it isn't far off, but the steep and long run-out definitely keeps you focused. After the steep final exit from the gully, we briefly stopped on the summit of Great End before heading over to Ill Crag, somewhere I (and many others) have tended to miss out on route to Scafell Pike over the years, but it has stunning views over Eskdale and is definitely worth the detour or as we did today, wait a few decades for the perfect conditions. Here on the initial slopes. Beautiful view of the final traverse on the eastern slopes. 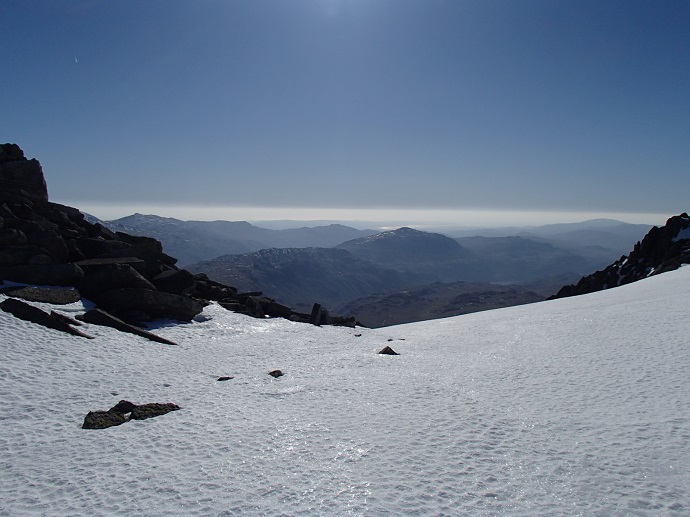 Near the summit looking southeast. The view along Eskdale from the summit of Ill Crag. 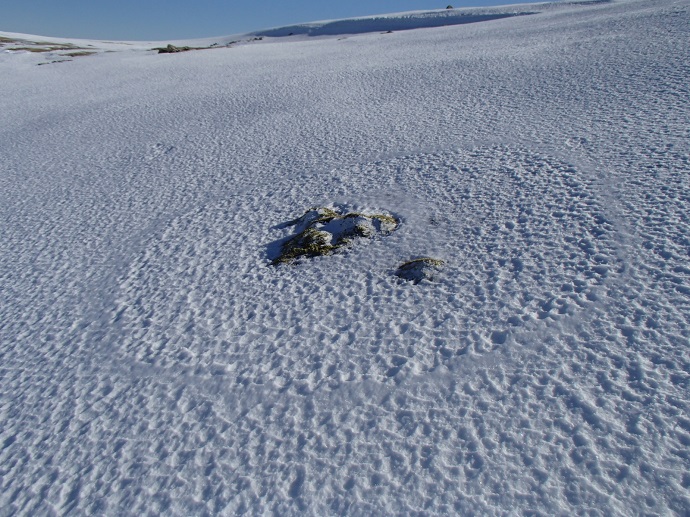 Does anyone know what these are? Ice fairy rings?! Our route down - from the coll between Great End and Ill Crag, we decided to drop down past Lambfoot Dub and join the Corridor Route back to Styhead.

And here begins the cautionary tale - the walker descending ahead of us, just visible in the shot above, tried to slide a short step down a snow slope but without an ice axe, quickly got out of control and took a 100+m tumbling slide down the mountain before hitting face first into a boulder and knocking himself unconscious. He came around before we reached him, and despite some nasty cuts and bruises and a LOT of blood, was miraculously otherwise unhurt. We patched him up and managed to help him down below the snowline onto the Corridor Route, and along to Styhead. His companion called Keswick mountain rescue once he got a signal and he was eventually airlifted out from there. One of the harder ways to learn to carry an ice axe in winter - but he very nearly didn't learn anything, ever, again. This would have been his ride into Kewick, had the air ambulance not been available.

All in all, yet another sublime winter day in the fells. Slightly marred by a near-tragedy, but in the end it wasn't, so all's good.

Superb report and photos. That gully looks like great fun - what a view to reward you at the top!

And great job coming to the aid of the injured walker. Sounds like he had a lucky escape.

Riverman wrote:Superb report and photos. That gully looks like great fun - what a view to reward you at the top!

And great job coming to the aid of the injured walker. Sounds like he had a lucky escape.

Thanks, yes its a fun gully and in those conditions it was just superb - I forgot to mention the wind had died and it was warm and sunny on top too, so we didn't need to rush away from the top - great day for a pleasant linger.

Yes he had a lucky escape - it's a sobering thing to watch. He probably didn't feel too lucky at the time but he definitely is!

According to Wainwright you did climb Cust's Gully.

Thanks for the info! And as another curmudgeonly old ****, I can't think of a more authoritative source. Cust's it is.

The person concerned was lucky to survive; let's hope he's learned his lesson.

Looked perfect conditions in the gullies and a great day to be out with the spikes and axes. Nice one. Great photos too.

The gully you went up (under the chockstone) is definitely Cust's. The fork to the right is Branch Gully. Window Gully is further to the left, towards Central Gully.