Time for another outing. Been keen to try out our new/first ever

campervan, a Mazda Bongo, which is only 25 years young and boy does it show! Anyway, one reason I got it was for trips to the hills, so I wanted to see how I would get on. Forecast was looking good for the Cairngorm area and Bynack More seemed a reasonably safe option to consider, so off we went to Aviemore. 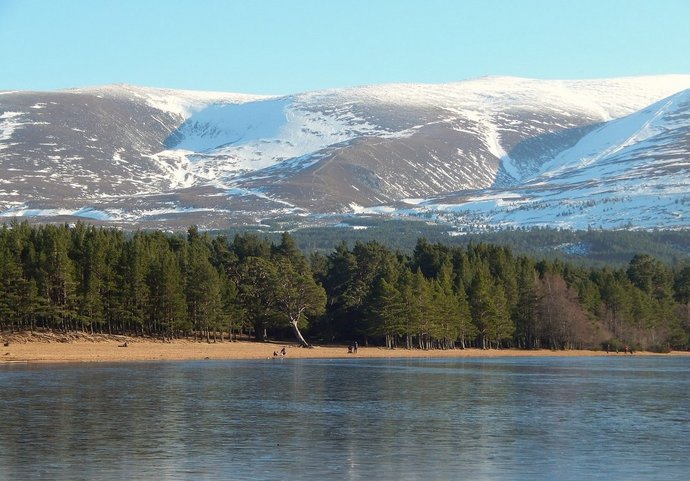 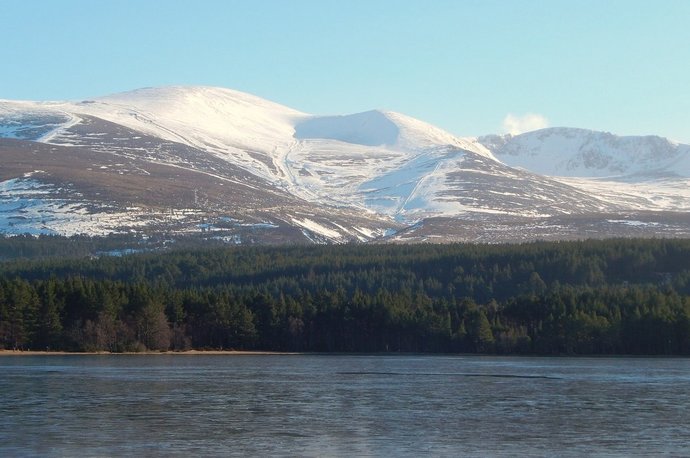 The ski slopes of Cairn Gorm.

The Bongo handled the trip well, tootling up the A9, at 60, no bother. Took about five hours, with various stops along the way. Visited the Old Bridge Inn, who were happy to allow me to park up overnight. Went and checked start point and proceeded up to the main car park for a wee nosey. Plenty of ski set around! 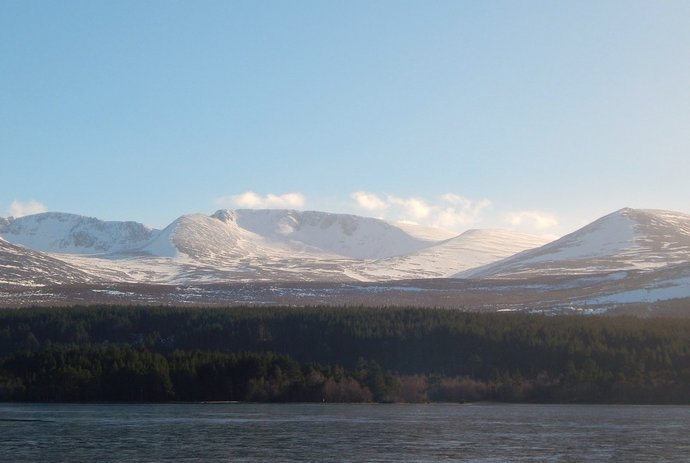 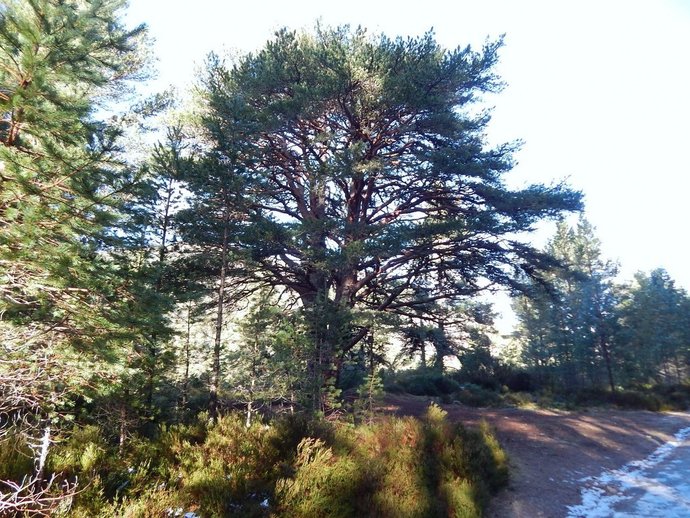 Enjoyed my evening in Aviemore with a meal, pricy, at the OBI, followed by some footie and good quiz at the Cairngorms Hotel. Never won, but didn’t do bad for a one man team

The Bongo was cold, with sub zero temps, but I felt snug enough in my two sleeping bags, except my big lugs. Next time wear hat! 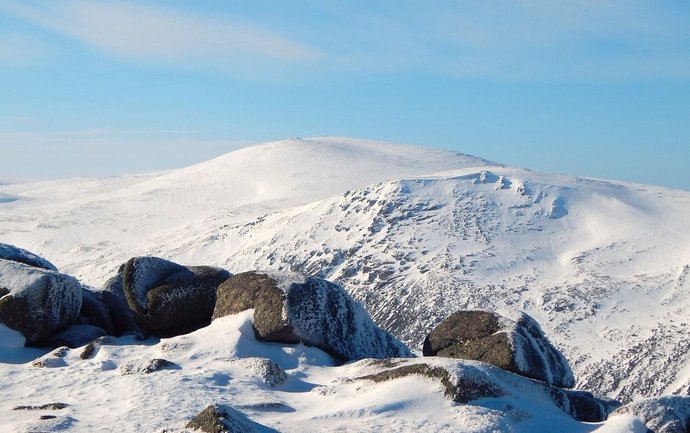 Got up around 7, had some grub then made for the Allt Mor car park, which was quite slippy with hardened snow/ice. Afraid to confess I never paid my £2 – the machine wouldn’t take my coins. In fact, at first the plastic cover was frozen stiff, over the coin slot

Got on my new boots, which were also getting their first major outing, having taken several months of faffing about, back and forward to Tiso, to finally get one’s I felt comfy with, which could take a crampon. 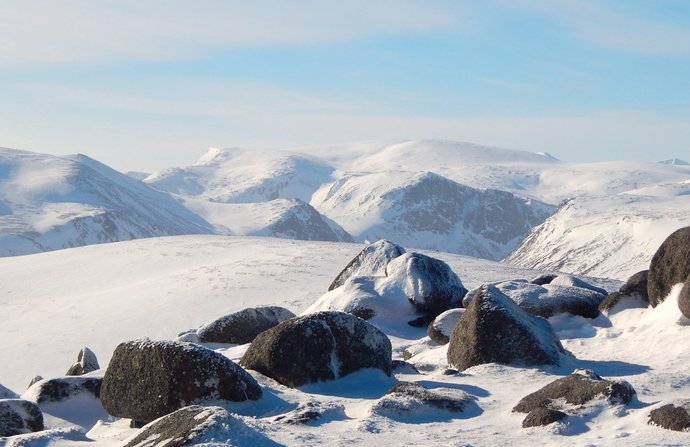 Macdui in the distance with Carn Etchachan, Stob Coire Sputan Dearg, among others.

Set off at 8, thinking nothing could be easier, having plenty maps, route notes and well made path to follow, but as usual still managed to get lost a little, with all the various bridge’s and other paths which criss-cross

Too much haste, not enough speed, along the track, which had a lot of ice and compacted snow. Managed to go in over my boots at the ford. Noticed bridge upstream after crossing, doh! 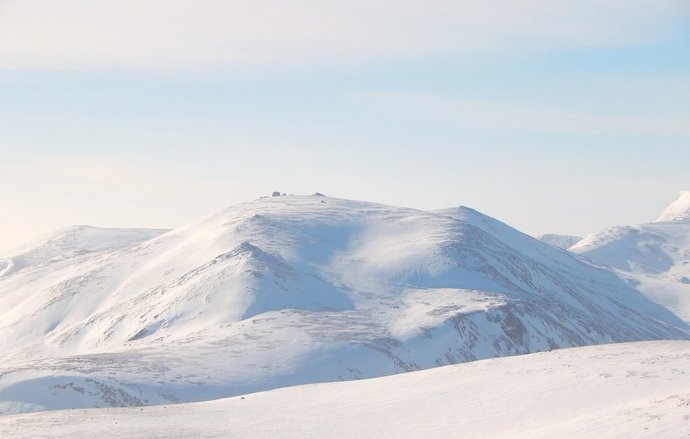 Fortunately the gaiters kept my feet dry. Dithered about here, back and forward, before realising now was not the time to make the right turn, but carry on to join path from Glenmore Lodge. From here route was no’ bother. Soon arrived at An Lochan Uaine. Beautiful! I saw a comment about folk using filters on their photo’s here, but it is as green as it looks.
Shortly after, met a guy heading opposite way. Turns out he had camped on Bynack More for the sunset. Keen! 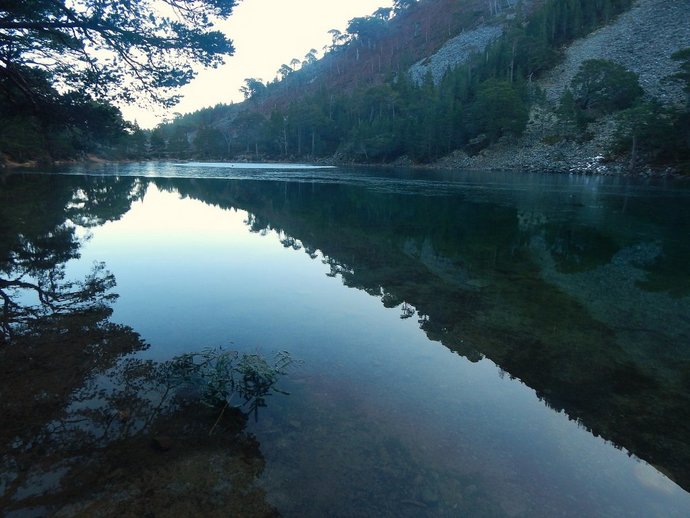 A peaceful An Lochan Uaine, half past breakfast time. 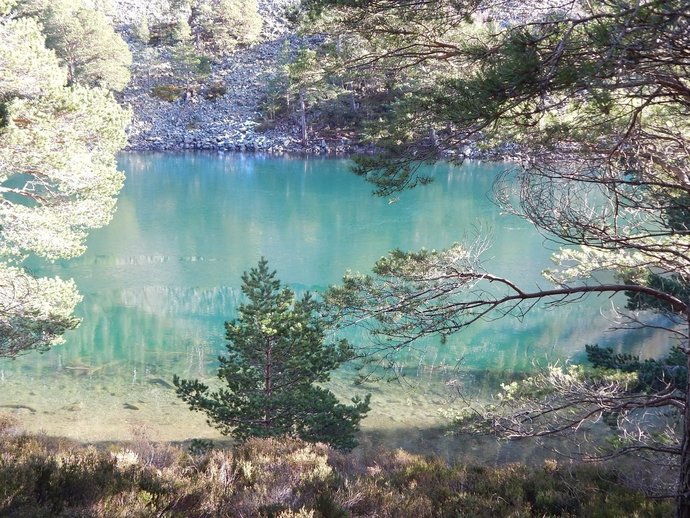 An Lochan Uaine, on way back. 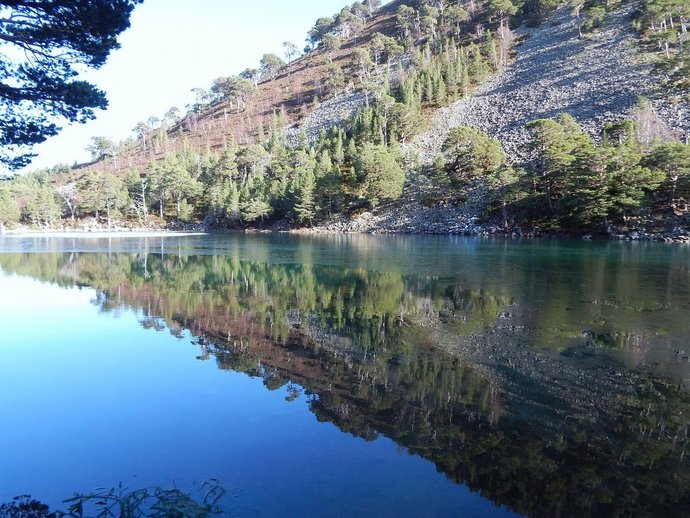 An Lochan Uaine. A bonny spot.

Gradually worked my way round to the invisible “Bynack Stable,” where I had a wee stop for food and fluids. Once over the Nethy, the snow gradually got deeper and more extensive, but fortunately the climb is not too steep, or arduous. The fine, pyramidal shape of Bynack More gradually begins to emerge, seated on the flat plateau, like a hill, on top of a hill, while the impressive ridge of Sron a’ Cha-no, toward Cairn Gorm, also catches the eye. 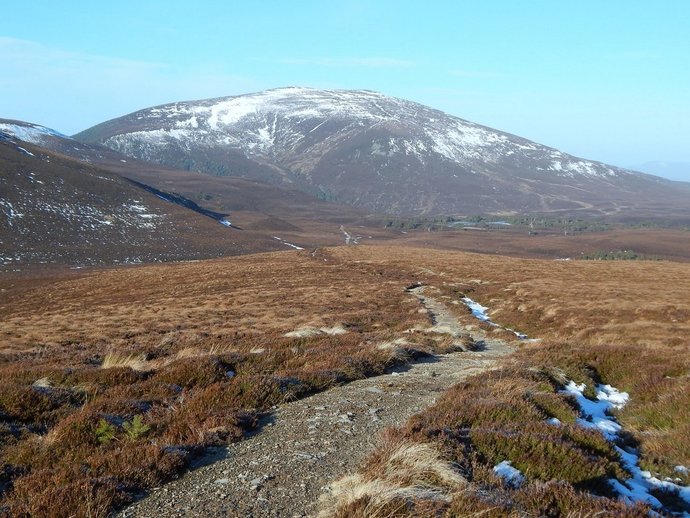 Looking back along the track to Meall a'Buachaille.

There’s a few paths up here and I gradually found myself drifting a bit to the east of BM, but it was no trouble to cut across the ground, heading for the obvious ridge down/up the mountain. At the foot of the main climb, I deliberated whether to start off with just boots, use microspikes, or just go for the crampons straight away. Decided on Plan C, rather than have to put on crampons higher up. Although the snow was pretty crusty, I think I probably would have got away, with either of the other options, but think the crampons was the way to go. 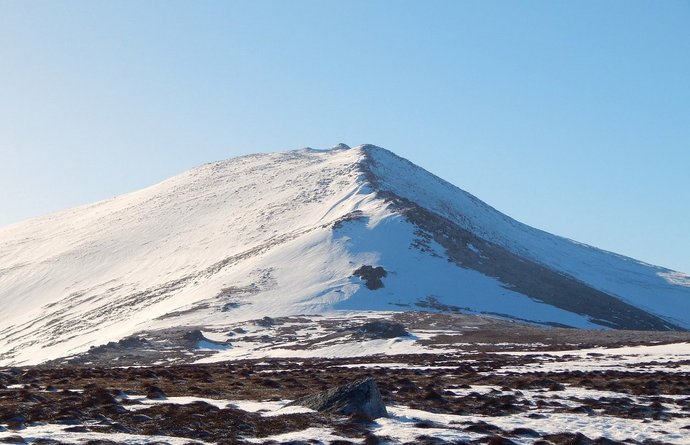 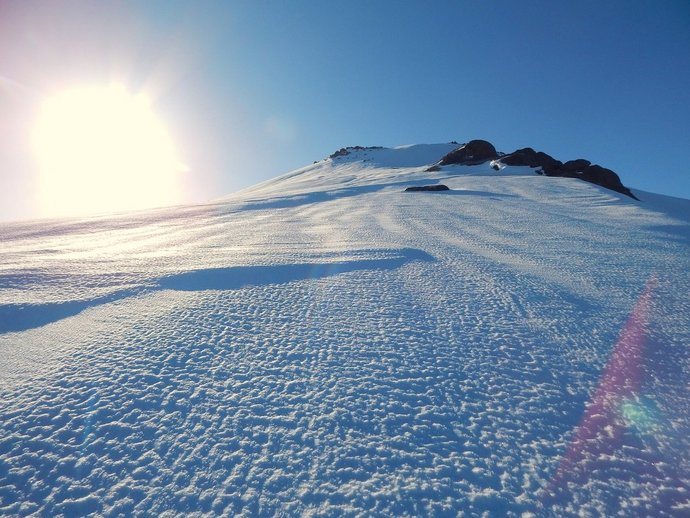 The climb is quite steep at first, but gradually eases off. I meandered a bit from one side of the ridge to the other, as and when the gradient dictated, before making it to the summit, in three and a quarter hours. The views were good, but a bit hazier than hoped. It was great looking toward Cairn Gorm, Macdui, Beann Mheadhoin, Beinn a’ Chaorainn and the Lairig and Laoigh, but harder to pick out the other Cairngorm hills and views toward Moray. I had seen about possible option to take in Cairngorm, but decided a wee visit to the Barns of Bynack, would be sufficient extra to add on to my already weary legs. These tor’s are mighty impressive. 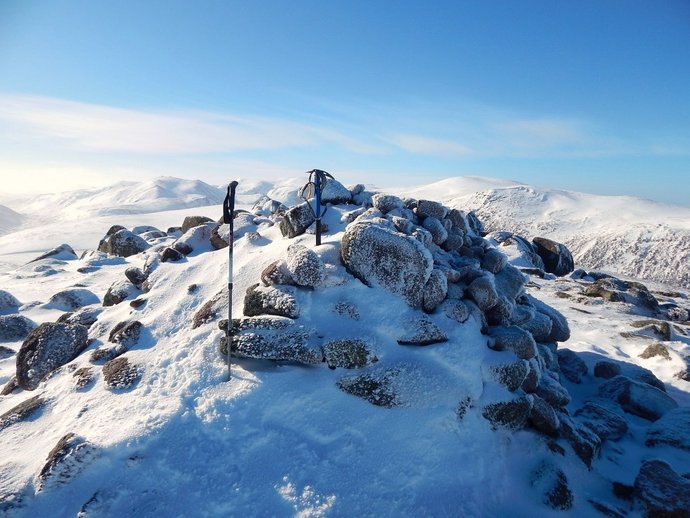 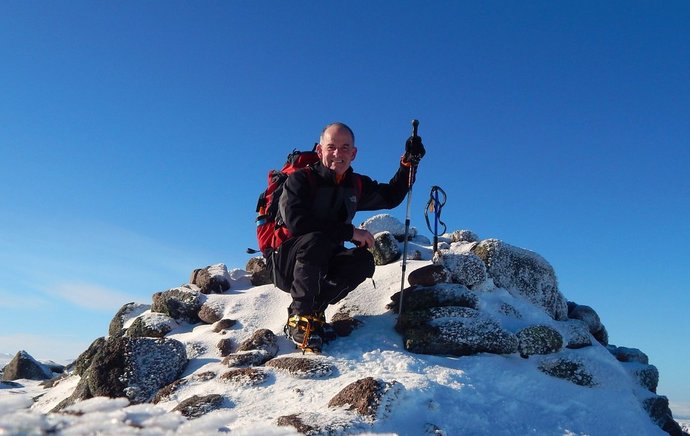 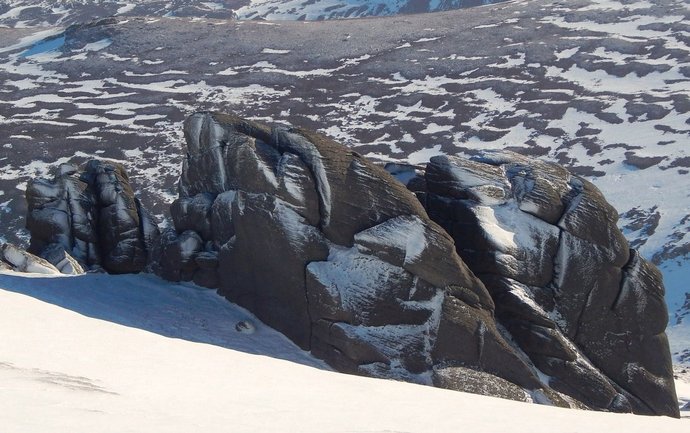 Barns of Bynack, viewed from 'above.'

Back on the summit, I took a few more pics of the exact same views, then glided off, back down, though this time mainly kept on the east side of the boulders on the ridge. Must admit, I fair enjoyed bounding down through the snow

Nearing the bottom, I spotted a group of three, heading in my direction, the only others I was to see on the hill. They arrived to put on their gear, just as I took mine off and enjoyed a well earned cup of coffee and some chow. 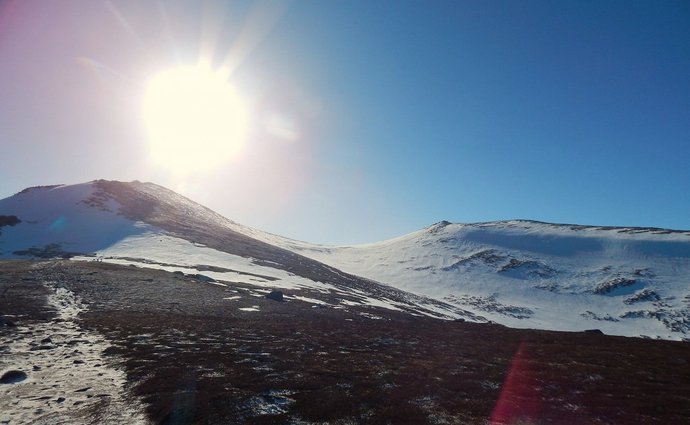 Looking back to Bynack More and Beg. 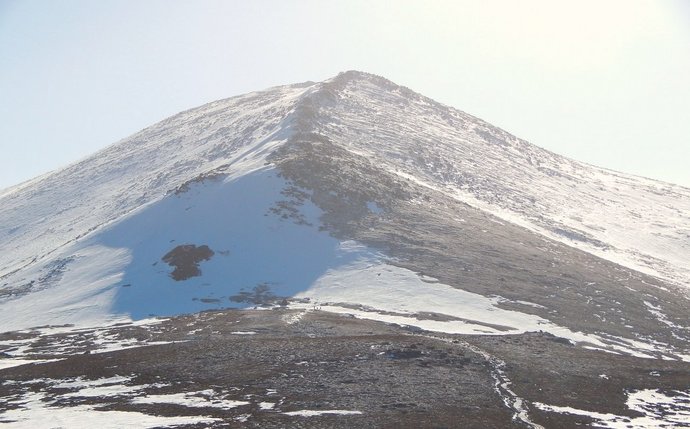 Spot the three about to head up? 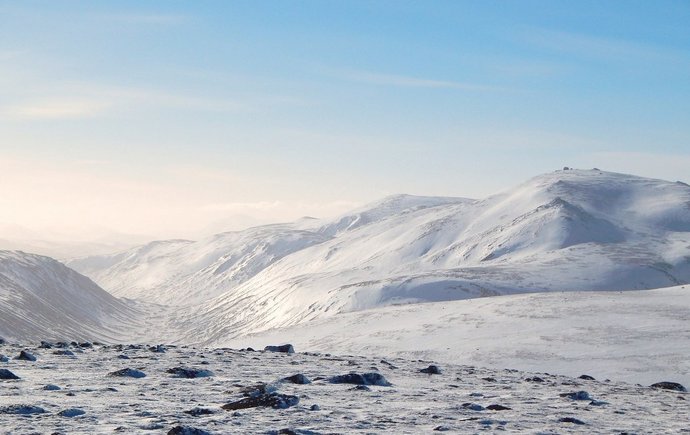 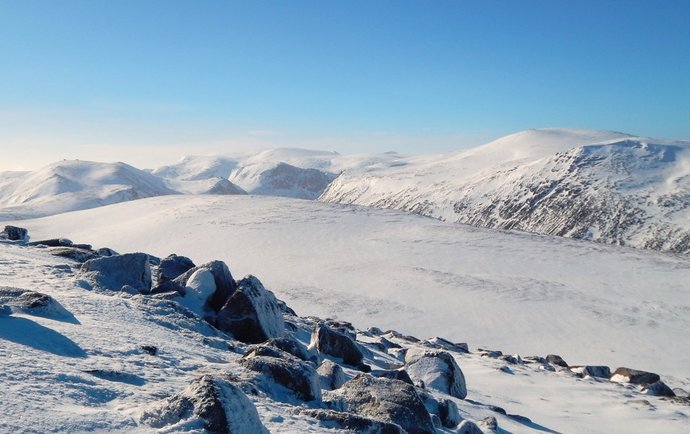 The hills to SW again. 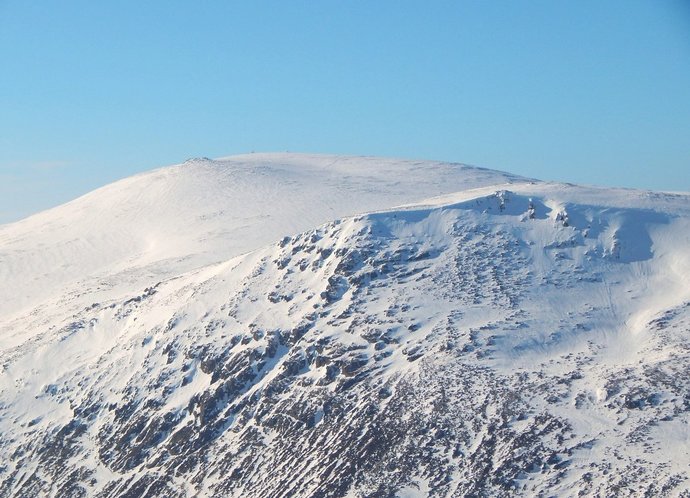 The return trip was pretty uneventful, aside from meeting a lot more folk, on the route to the Green Loch, which I just had to visit again. Being myself, with a fairly gentle descent and long journey home to come, I chose to keep up a good pace, a wee trot here and there and was back at the car in just under the six hours, well pleased with my day. The Bongo also, behaved itself on the way home and I hope it isn’t long till we do it again. 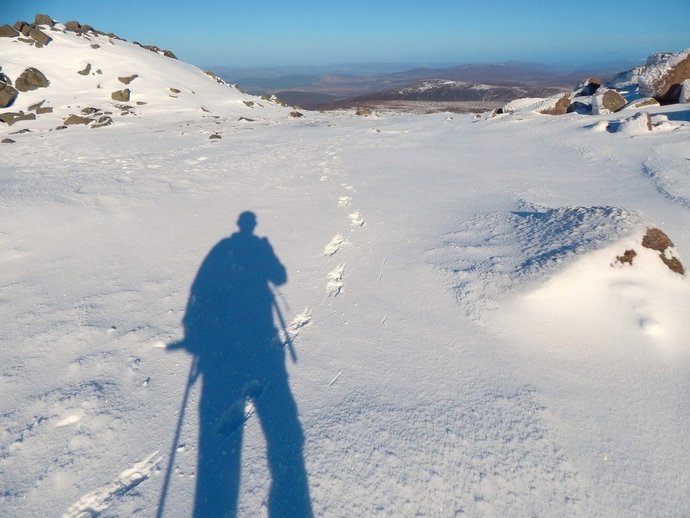 Ready to head down. 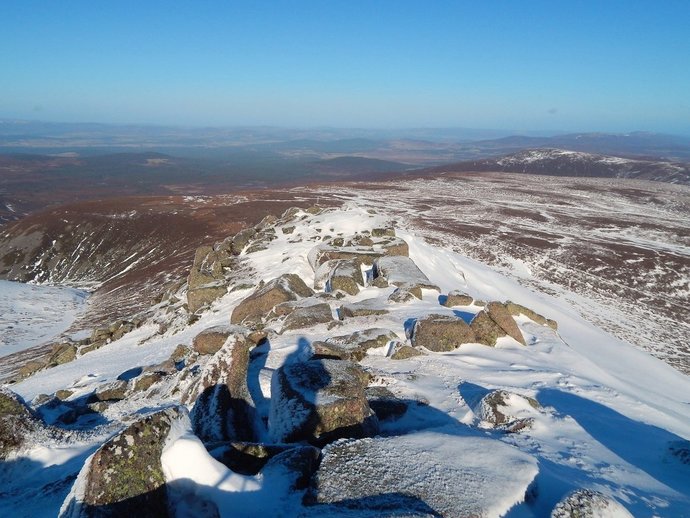 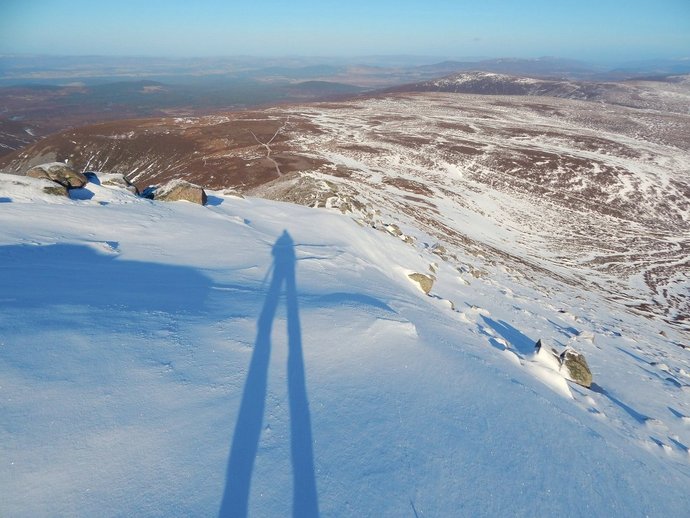 the green loch is particularly green isn't it

the green loch is particularly green isn't it

Thank you, Ancancha. Yes, it is a nice part of the country. I saw someone, I think on fb, say people should not use filters when taking pics of the An Lochan Uaine, presumably to make it look greener than it is. I don't think anyone would need to.

It is pretty rough, but will do me! Fingers crossed

My fav mountain in the Cairngorms

Looks superb in white coat! I imagine there must be more snow up there now, after the eastern beast attacked us so violently. Fingers crossed it's all over now and the perfect weather returns...

We tried different routes up/down Bynack and the neighbouring Corbett Creag Mhor and every time I ended up scrambling all over the Barns. The best playground for adults I've ever been to

Also on the final climb to the summit, there are some odd-shaped rocks, one looks like a giant turtle.

I don't think it's necessary to use any filters on Lochan Uaine - it's green enough as it is! 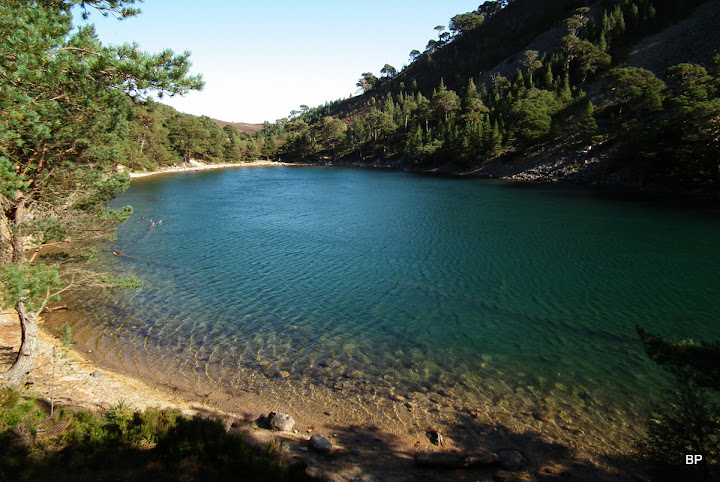 I heard somewhere that swimming in it it's not recommended as it is full of leaches... Never tried it myself so I don't know if it's true

Great photos Jim and a cracking day. I've been up Bynack Mor a few times as it's quite close to me. I usually park at the end of the road at Glenmore which is a good option.
I quite like the Old Bridge but yes it is a bit pricey but not bad if they let you park up. Lots of decent options for food and drink in Aviemore though.
All the best.

Just one missing - the faithful Bongo!