Taming the Beast from the East, part 1

Taming the Beast from the East, part 1


The Beast has arrived, the weatherman on TV screen announced with a grim face. Wrap up, light up your fireplace and stay put. Red alert for the central belt, orange warning for the rest of Scotland.

On both Thursday and Friday Kevin came home early. Trailers from the south have not arrived, they got stuck in Glasgow. On Friday afternoon we went to Inverness for some basic shopping, only to witness havoc in supermarkets, empty shelves where fresh products should be, people panic-buying. Funny, there was no snow whatsoever on low ground in Inverness, even Ben Wyvis on the horizon had only patches of the white stuff. It was hard to believe that only a few hundred miles south, people were struggling to get out of their houses!

We took more philosophical approach to the whole "Beast from the east" affair, bought just the usual stuff for the next few days and returned home, hoping that weather up north would be stable enough, so we could spend the next two days hillwalking. The strong cold wind did enough to put us off any multi-Munro excursions, but there are enough nice lower hills close to Beauly, for the famous now "quickies in the neighbourhood"

Weather was going to be rather bad everywhere

hence a local Sub'2000 Marylin called Burach came in handy. We had it in mind in January as a winter walk, but conditions were good enough to venture onto higher ground and as a result we hopped and jumped over higher hills. Now it was time to visit this hardly known Marylin, situated just north of Fort Augustus. The starting point is from the Forestry Commision car park in Allt na Criche (no charge at the moment) and a good network of newly constructed paths leads easily out of the woods and onto the higher, heathery slopes of the Great Glen. The climb to the summit is quick, but we carried on along the ridge and explored it some more, despite Baltic conditions. Here is our route:

Track_BURACH 03-03-18.gpx Open full screen  NB: Walkhighlands is not responsible for the accuracy of gpx files in users posts
The day was very grey and depressing, but we stayed in our philosophical mood, "whatever will be, will be" and set off from the car park, following the well-worn path along the stream Allt na Criche: 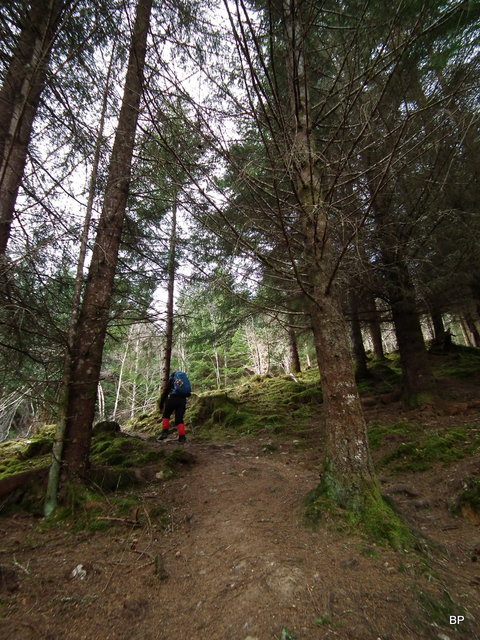 It's a lovely stroll by its own means, we spent some time photographing half-frozen waterfalls: 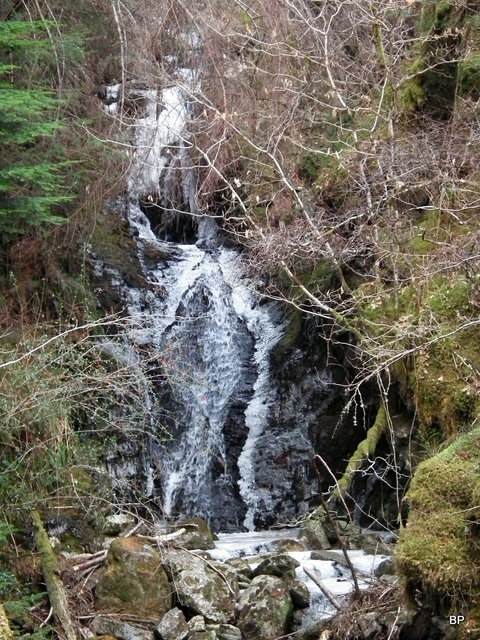 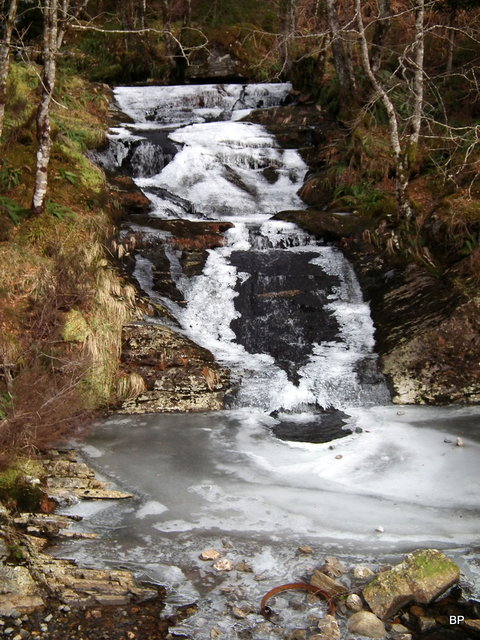 The paths around this area have been recently improved, there is a new "high trail" which will take you above the forest level, well signposted and dry underfoot. It levels up at some point and leads to a viewpoint, where we could admire Loch Ness and Fort Augustus from above. As I said, light conditions were bad and all photos came out dull, so apologies for lack of brilliant snaps in this report. Did my best to brighten up the atmosphere

The path emerging from the forest: 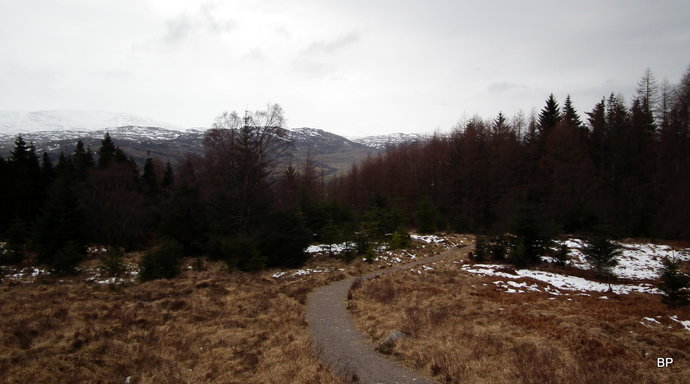 Pano from the viewpoint:

Fort Augustus and Loch Lochy Munros on the horizon:

From the viewpoint the path continues just above the forest line, I guess it joins the GGWay track further north (maybe we'll come back to explore it some other time) but we had to leave it behind and turn NW up the grassy-heathery slopes. We expected a bogfeast, but a nice surprise: all bog was frozen solid. Easy walking on hard ground. The Beast did us a small favour, that was the first taming step

The walk up was uneventful, almost boring, I should say. we followed a faint track for a short distance, but as soon as we spotted the summit cairn on the horizon, we aimed straight for it. After another 200m of ascent, we walked onto the snow. There was no need for crampons though. The only entertaining incident was... discovering alien surveillance equipment!
The aliens are listening! 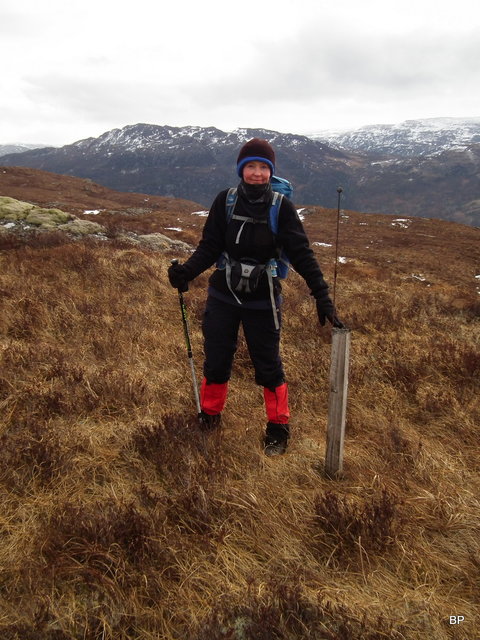 Up to the summit, looks booooring!

It wasn't as boring as I expected it to be, due to the strong wind on higher levels. The walls of the Great Glen may give some protection from the gusts lower down, but on 400m and higher, it was blowing hard and my fingers went numb despite me wearing ski gloves. I think my facial expression speaks for itself! 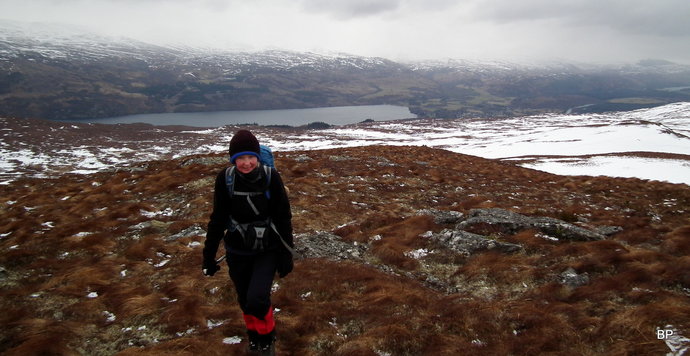 The summit cairn is perched on a rocky bump. Burach is 607m high, which almost makes it a Graham. "Almost" makes the difference

We found a good, sheltered spot below the summit bump, left our rucksacks there, put on extra warm layers and climbed the final meters to the cairn, where we were hit by the wind so strong, that we could only just about stand straight. Posing for a good cairn photo was an art in itself, so I had to turn into a ninja warrior to face the beast

Kevin gave me the camera and asked for his own summit snap. The first attempt resulted in this: 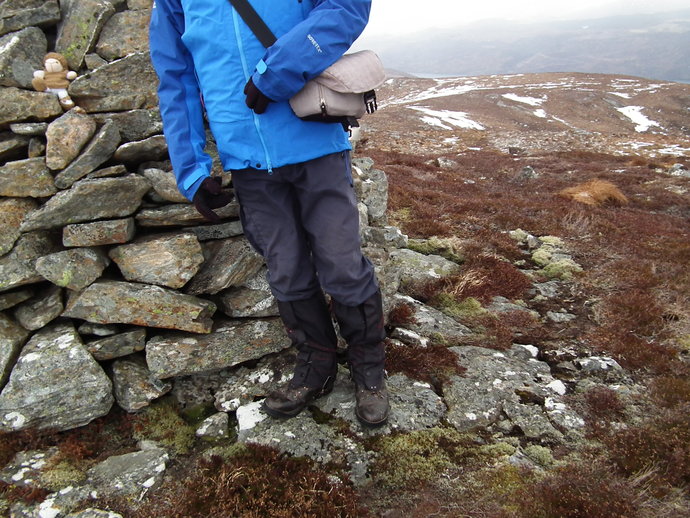 Only the third time lucky, I managed to hold myself steady to actually take a proper photo. Notice wee Lucy wedged between the rocks of the cairn... 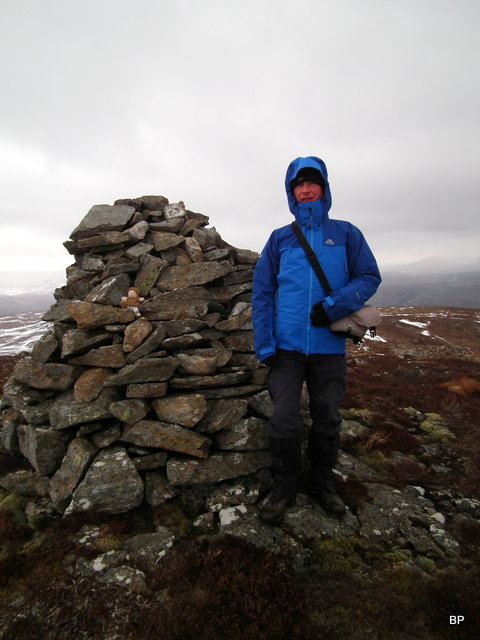 ) it started to snow. The beast from the east was not joking - it would not be tamed so easily!

We retreated to our sheltered spot below the summit, where we sat down and enjoyed a hot cuppa and a snack, waiting for the shower to pass. We discussed our options. We could return back the way we came, but we liked the idea of following the ridge south-west to Carn nan Dubh Lochan, explore the set of little lochans marked on the map. As we spoke, the snow shower passed and even the wind dropped a bit. The Beast was showing us the first signs of obedience!
We decided to walk the ridge and it proved to be a great choice. If doing Burach, you simply have to visit the area SW of the summit, all the rocky outcrops and wee lochans. The ridge is better than the summit itself!
Heading into the white world:

Soon we noticed the first loch, called Dubh Lochan. Can you see it? It's well hidden!

Dubh Lochan was frozen solid (what a surprise!) but we didn't venture onto the surface. Instead we climbed to the top of Carn nan Dubh Lochan, taking photos from every possible vantage point:

Panoramic snaps of the frozen lochan and the cliffs above:

Looking back to the summit of Burach:

Dubh Lochan from above - don't dive in it! 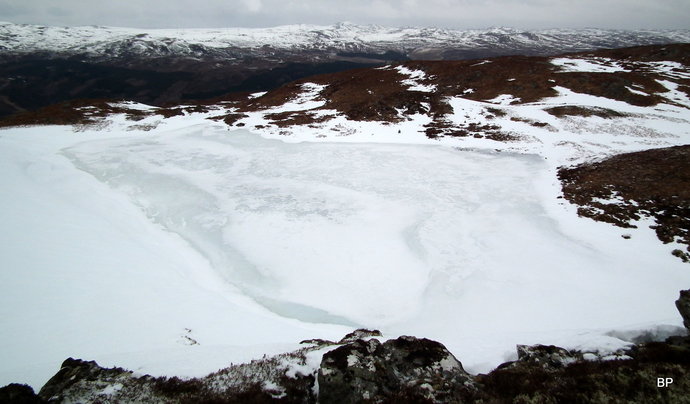 More to come! From Carn nan Dubh Lochan we continued to the next lump, where we spotted another loch, this one called... Dubh Lochan, too. Somebody was not very inventive with names here

Back to the summit of Burach, Meall Fuar-mhonaidh visible behind:

Looking north-east across the Great Glen:

The wind was still strong but not as bad as on the summit earlier on, we could walk without being pushed from pillar to post, and snow was soft enough so we got away without crampons. I was beginning to like this process of beast taming!

Gazing into the distance, towards the hardly visible hills of Glen Shiel: 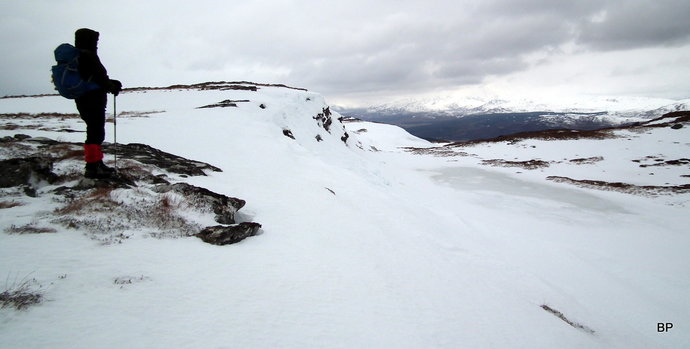 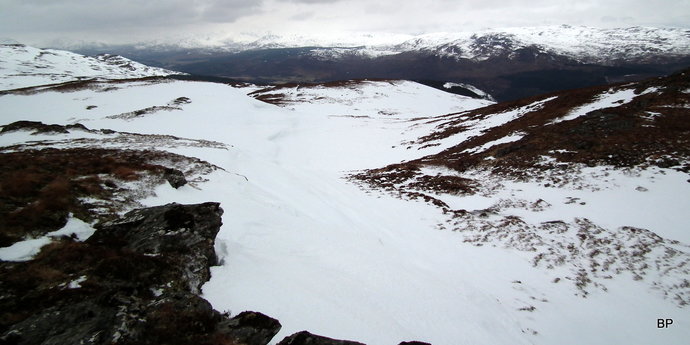 We walked past another lochan

and Kevin of course could not resist stopping for a photo session. It was baltic cold, yes, the Beast was not domesticated just yet, but it would let us be as long as we showed some respect!

On a longer day, we would be tempted to carry on to another, bigger loch (Loch a'Bhealaich) and to climb an outlying top, Carn Dubh (592m), but at the moment, we were tired of wrestling with the Beast from the East, so decided to drop back to the forest. We followed a natural shoulder, crossed a stream and descended steeper slopes down to a gap in the trees, we could see below:

The gap turned out to be a firebreak, to our delight we spotted a forest track only a short distance below: 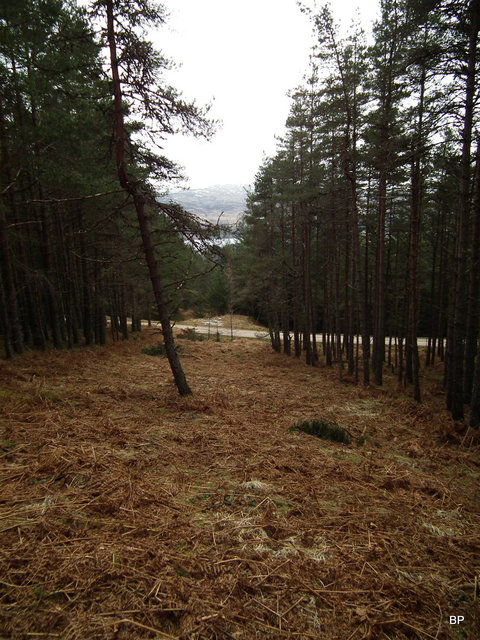 This track took us all the way back to the forest trails by Allt na Criche. It was pleasant walking, now safe from the beastly winds 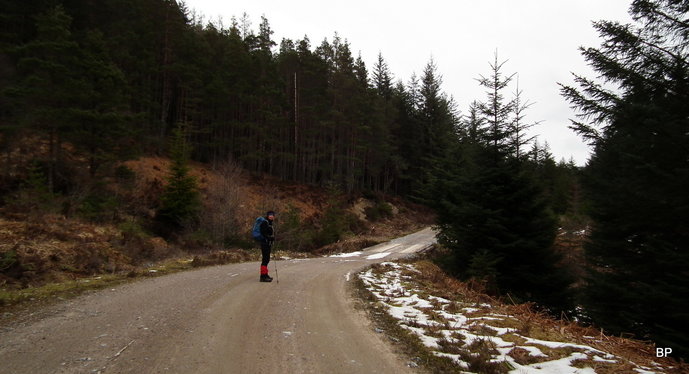 We passed by another viewpoint, this one with a wooden bench, where we rested for a short time enjoying the views down to Loch Ness:

Overall, a day not wasted

I was pleasantly surprised with Burach, it's a nice hill, especially the SW ridge. Views would be much better on a blue-sky day, but taming the beast was also entertaining in a weird way. We enjoy little challenges and this Marylin it indeed a small challenge in winter conditions.
...........
On Sunday, we headed to Torridon for more beast taming. TR in progress

Sounds like a bit of a Beastly day! Always fun once you get down from the battle with the winds though!

Thanks for drawing attention to this hill I'd never noticed. Your photos are great as it is - but wouldn't it be stunning to do on a blue sky day? Feel a plan coming on!

Mal Grey wrote:Sounds like a bit of a Beastly day! Always fun once you get down from the battle with the winds though!

Hard work against the wind, but well rewarded with the great ridge full of frozen puddles! The camera did not register all the daft moves I made, hopping over bumps

I get told off by my in-laws every time I use "lake" and "valley", they say in Scotland there are only lochs and glens

dogplodder wrote:Thanks for drawing attention to this hill I'd never noticed. Your photos are great as it is - but wouldn't it be stunning to do on a blue sky day? Feel a plan coming on!

It would indeed be a brilliant walk in perfect conditions, with views not obstructed by cloud and enough time to have a picnic by one of those lochs! We will most likely visit this hill again and explore it more

Mal Grey wrote:S
I get told off by my in-laws every time I use "lake" and "valley", they say in Scotland there are only lochs and glens

Actually, they're probably lochans, so I was wrong on two counts!