As the 'Beast from the East' was bringing large areas of the country to a standstill, the trip to Torridon that Karl and myself had planned for the first week in March was looking increasingly unlikely to get off the ground. However, a phone call to the bunkhouse at Kinlochewe revealed that no disruption had occurred up that way. So it was just a matter of getting there from Cumbria. Snow shovel stashed in the boot, we were prepared for possible problems on the M74, M80 and A9 over Drumochter as we set off early on the morning of Saturday, 3rd March. But as it turned out, we needn't have worried. The roads were completely clear (and eerily empty), apart from one hefty snow shower on the M80, which deposited a layer of slush. Game on!

Around Inverness there wasn't a scrap of snow to be seen anywhere. Clearly this part of Scotland had escaped the clutches of the Beast altogether. Further west into the hills the lower slopes were bare, but higher up big snowfields disappeared into the clag. Things looked promising. All we needed was some half decent weather.

Entering the bunkhouse we were greeted by a couple of seasoned mountaineers from Sunderland, Tim and Dave. They told us they'd been here the previous weekend and had done the traverse of Liathach in perfect conditions of unbroken sunshine and rock-hard neve. Lucky them! They were planning to do the Beinn Alligin Traverse the following day and were confident conditions would be good as there hadn't been much in the way of fresh snow.

However, Karl and me were content to kick off with Slioch, as the forecast wasn't particularly good; gusty winds and snow showers bringing 'appalling' visibility. We managed Slioch, albeit in a gale and a whiteout (report to follow), but Tim and Dave were forced to abandon Beinn Alligin. The Monday was worse so we had a rest day. Tuesday we decided on Fionn Bheinn. The clag was low and the compass work started early. Two thirds of the way up we entered total whiteout, it was snowing, and it was windy. We decided to turn back. The forecast for Wednesday was rather better, with much lighter winds, though still only a 20% chance of cloud-free Munros. Our first thought was to go back to Fionn Bheinn, but when we walked out of the bunkhouse door in the morning the sky was blue, the sun was shining and the birds were singing. It was too good an opportunity to miss, so we headed for Beinn Alligin.

The mountains were plastered with fresh snow and looked slightly surreal with the moon floating over them in a deep blue sky. Liathach looked magnificent, and we were momentarily tempted, until we thought about the volume of fresh snow, which would have given difficult conditions on the Pinnacles. So we stuck to our plan for Beinn Alligin; the Horns would be challenging enough. It was 8.35am by the time we walked out of the car park at the bridge over the Allt Coire Mhic Nobuil, near Torridon House. It's a beautiful spot, the banks of the ravine adorned with splendid Scots pines and a fine waterfall flashing through the undergrowth a few hundred yards upstream. A clear path on the left side leads up the hillside, gently at first but soon steepening to gain height quickly; it's a delight to follow. 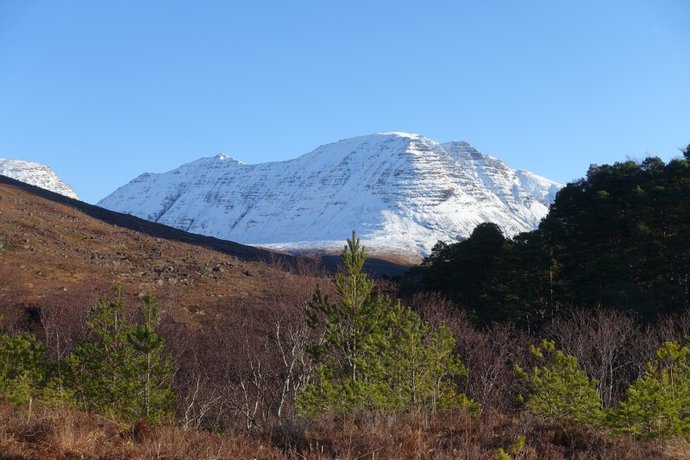 Beinn Dearg from start of the path up Tom na Gruagaich In the windless sunshine it was warm work; we were soon down to our base-layers. Sgurr Mor and the Horns of Alligin In the floor of Coire nan Laogh we stopped to put our crampons on, ready for the steepening tongue of hard snow above. The sun felt quite strong, so I put my sun hat on too. I could hardly believe I was doing that! Reaching the summit of Tom na Gruagaich was an exciting moment, with the ground plunging away beneath our feet to the north east. The views were unbelievable. A chilly breeze was blowing and we were still just in our base-layers, so we put on another couple of layers. Also the terrain got a bit more serious from now on, so it was out with the ice axes, poles having sufficed up to now. 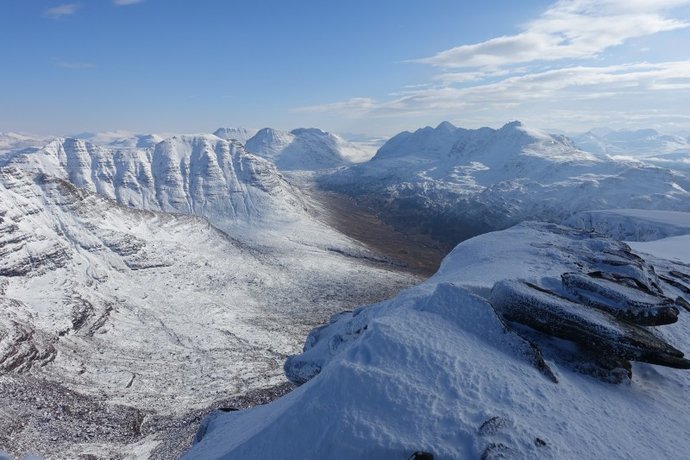 The ridge descending northwards from Tom na Gruagaich is quite exposed in places. The rocks were coated in a good thickness of ice and solid neve - great for the campons. Not far down is a awkward step into a crack from one ledge to a lower one. Fortunately the crack contains a securely wedged chockstone, which provides a very useful handhold! The ridge from Tom na Gruagaich to Sgurr Mor From the col the ridge leading up Sgurr Mor is easier. It was starting to cloud over a bit though. By the time we reached the notch of Eag Dubh a mild snow-shower had set in. On the way up we passed a fellow doing the traverse in the opposite direction. We asked him what the snow was like on the Horns and he told us it was soft and sugary in places. He'd come up by Deep South Gully, which had been in good nick. Fortunately the snow-shower soon passed over and had stopped by the time we reached the summit of Sgurr Mor. The Horns and Beinn Dearg from Sgurr Mor Karl on summit of Sgurr Mor

The descent of Sgurr Mor was relatively straightforward, with some exposure in places and one or two slightly awkward steps, and we were soon at the col before the Horns. We paused there for a bite and a coffee, while we contemplated the next part of the traverse. The ridge rose up and narrowed dramatically to form an arête leading to the first (NW) Horn. Getting up the first Horn was the trickiest part of the traverse. From the descent of Sgurr Mor, the initial arête had looked quite alarming, though there appeared to be a banked-out path on the right well below the crest. When we set off, though, the arête itself turned out to be quite easy - just rather exposed. After this the ground steepened considerably up a series of rock bands. The footprints of the chap we met gave us something to follow, working on the assumption that he'd found the best way. The snow was indeed soft, but the climbing easy enough, winding a way through the bands, until the prints led us to a higher band which was a bit steeper. There were an awkward few steps through this up some steep, soft snow overlying rock and shallow turf; it took a bit of hacking around to find some secure axe placements in the turf. Neither of us would have fancied descendingthat!

Above this the ground eased off, fortunately. Sgurr Mor from the NW Horn The crest of the NW Horn was an absolute delight - narrow and exposed but technically easy and with firmer snow. On the crest of the NW Horn

On the middle Horn we encountered a party of military students on a mountain skills training course, coming the other way. They were very friendly and courteous. We didn't envy them having to descend the NW Horn, though it was possible their instructor might find an easier route than the way we went. Hope they got on alright. We could easily have by-passed the final (SE) Horn, but decided to go over the top of it for the sake of completeness and to prolong the fun. This involved an awkward little step onto a ledge, an exposed walk along the ledge then an easy little chimney through the rocks to the top. The view of Slioch and the Fisherfields was fantastic. Slioch and Fisherfield from SE Horn

Having traversed the Horns it's tempting to think it's all over. It's not. The descent is long, rough and involves some surprisingly steep little scrambles. Eventually though the ground eases off and an excellent path leads via two footbridges to the main path down Coire Mhic Nobuil and back to the car park.

What a fabulous day it had been; a superb experience that, by itself, had made the whole trip worthwhile.

Stunning photos, loved the photo of the ridge

Fantastic photos and a great reward after those aborted walks.

Perfect timing and a great day for it - cheers

Stunning photos, loved the photo of the ridge

litljortindan wrote:Fantastic photos and a great reward after those aborted walks.

Perfect timing and a great day for it - cheers

Thanks guys. It was a privilege to be up there in such (unexpectedly) good weather and conditions. We were very lucky. Torridon is a truly magnificent place.

Fabulous. Brings back memories of one of our best hill days, on our first winter week back in '91.

Heck, it doesn't get much better than that: Torridon in perfect winter conditions! Wonderful..You certainly managed to get some absolutely superb pics.

I guess you deserved it after what must have been quite a disappointment on the first days.

I long to do this one. I had to go round the base a couple of years ago in similar superb weather because my walking companion was neither experienced enough, nor is he good with exposure. But we still had a great walk.

. Reminds me of a similar day on the adjacent Beinn Dearg (which is a bit easier) some years back.

Mal Grey wrote:Fabulous. Brings back memories of one of our best hill days, on our first winter week back in '91.

Alteknacker wrote:Heck, it doesn't get much better than that: Torridon in perfect winter conditions! Wonderful..You certainly managed to get some absolutely superb pics.

I guess you deserved it after what must have been quite a disappointment on the first days.

I long to do this one. I had to go round the base a couple of years ago in similar superb weather because my walking companion was neither experienced enough, nor is he good with exposure. But we still had a great walk.

Thanks AK. Don't know about deserving it but we certainly appreciated it. Must admit we'd had a bit of a bad run in Scotland this winter up 'till then.

Yes, winter walking on the Torridons is quite serious - see my report on Beinn Eighe which I'm about to post.

Must have been rather frustrating for you on the occasion you describe, but I reckon any walk in Torridon is worth doing; it's great just being there!

malky_c wrote:Brilliant - NW seems to have been the place to be in recent weeks

. Reminds me of a similar day on the adjacent Beinn Dearg (which is a bit easier) some years back.

Thanks Malky. Beinn Dearg looks superb - we were admiring it all the time. Surely one of the most impressive of the Corbetts.