I've been a part of Walkhighlands now for number of years. Before I go out on the hills, it is without doubt my goto page for all information about that walk or hill. I love the fact that everyone writes about their own experience and the knowledge you can gain from these reports. So I've decidied that I should be contributing to these walk reports as well. Not that I expect my reports to be the font of all knowledge but if one of my reports can inspire through either a sentence or a picture then I will consider that to be job done. I had planned my first report to be Millstone Hill but unfortunately time has slipped by. With that in mind, I will kickstart my reports with Sundays walk up Ben Rinnes.

We only had enough time for a half days walk and with the two of us wanting to bag a Corbett, Ben Rinnes seemed the obvious choice. The drive from Aberdeen takes less than an hour, driving past Huntly and through Dufftown. There was ample parking for us on Sunday, however, I guess that during the summer Ben Rinnes would be a popular hill so best get there early.

The surrounding hills all had a covering of snow and although you couldn't see far up the hill, we figured that Ben Rinnes would also be covered in snow. The path from the car park is straighforward and easy to follow. The snow that covered the path was soft and sludgy underfoot. This made the going quite difficult at times, as we slipped and slid our way up the eastern side of the hill. It didn't take us too long to reach the top of Roy's Hill, and as the hill levelled out for that short bit, it was welcome relief for our legs. 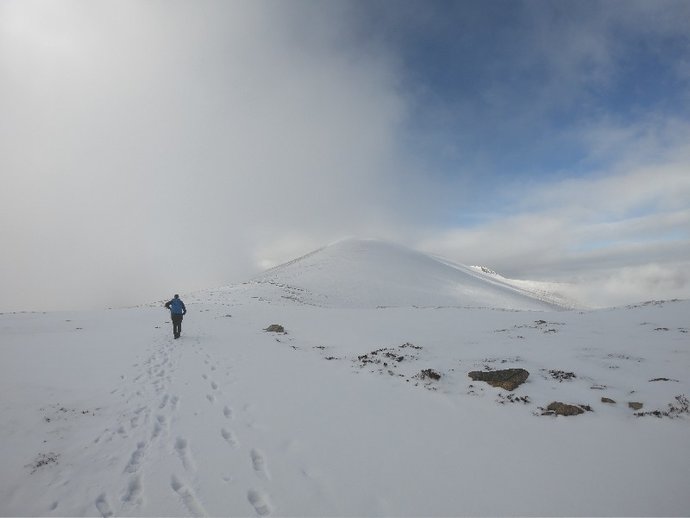 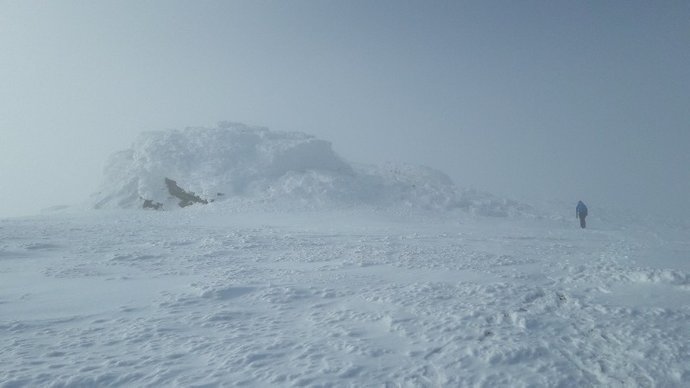 The approach to the summit.

The summit of Ben Rinnes was covered in mist. The path had long dissappeared under the snow and we were now following the numerous footprints in the snow left behind by the others who had made this same climb. We stopped for a drink and a snack, enjoying the view when the sun would break through the clouds every now and again. The final push up the hill was slow going, snow shoes would've been ideal for this, but we took our time ensuring that we could both get up without causing ourselves an injury.

The granite tor soon revealed itself to us through the mist and the sight of it brought smiles to our faces. We found the safest way up the tor to the trig point. The mist didn't lift while we were there but it didn't matter. The snow on the tor gave us plenty to smile about, the snow cutting some fine shapes as the wind blasted the hill from the west. We had the summit to ourselves which was fantastic as the wind had died down to leave us in an eerily silence and stillness on the hill. 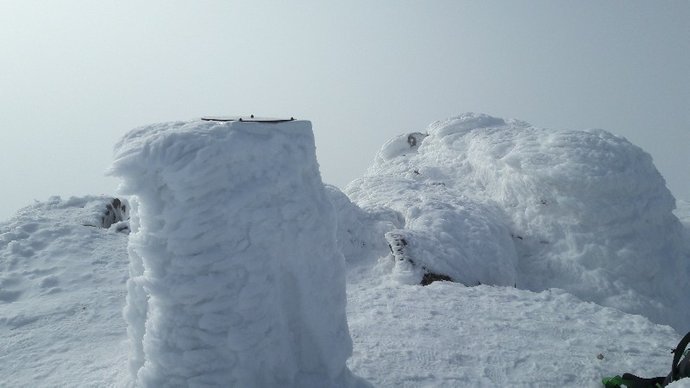 We hung around for about fifteen minutes before we started back down the hill, following our footsteps through the snow. On the way down we passed plenty of others making their own way upwards and onwards through the snow in this winter wonderland.

Nice to see a local hill report.
Keep them up.
Great looking snow conditions.
Had considered this one or Mona Gowan for the weekend but given poor forecast for weekend will head up Lord Arthur's Hill tomorrow to take advantage of the good forecast..