Breaking the 2018 hill famine in Borrowdale.

Breaking the 2018 hill famine in Borrowdale.


Our first day out in the hills this year, in fact, we've not been out since November, it seemed that every time we thought about a trip out either work got in the way or the weather wasn't playing ball so time progressed, December, January and February seemed to fly by, quicker than usual, I've been told it's an age thing, so March is here already, we had to do something before "cabin fever" sets in.

Luckily we had a weekend booked in Cockermouth so we could at least give it a go and hopefully realise our ambition and get out, the weather looked promising too.

As far as hill fitness is concerned, we weren't expecting much "get up and go" so, as a reintroduction to the hills, there were three smaller Wainwrights in Borrowdale we'd been saving for such a situation so our first targets for 2018 were Castle Crag, Grange Fell and Great Crag, looking at the map we could connect them in one round walk starting from Rosthwaite, things didn't quite pan out that way though, this is how we got on.

Saturday 10th March was meant to be a decent day according to the forecast given at the beginning of the week, as the week progressed a familiar pattern began to emerge. Saturday 10th March was given out as windy with rain all day when we watched the BBC forecast Friday evening, oh 'eck!!!, but, we'll go for it, we've just go to get out.
The day dawned as predicted so plan B was decided upon, the same three hills but a shorter route.

We parked up in the small N.T carpark in Rosthwaite, one advantage of being members is that parking is paid for, a parking ticket in the Lakes is an expensive luxury nowadays, It was raining so the jackets went on from the start, we set off for Castle Crag.

This is an ideal "break in" walk, although short it has a bit of every thing, level to start with, then gets a little steeper up Lingy Bank then, over the stile in the wall, it gets a wee bit steeper, up to the summit, it's a nice little walk and I can see why it's popular with families with young children, long enough to give them a good work out and not too long to allow "fedupness" to set in. 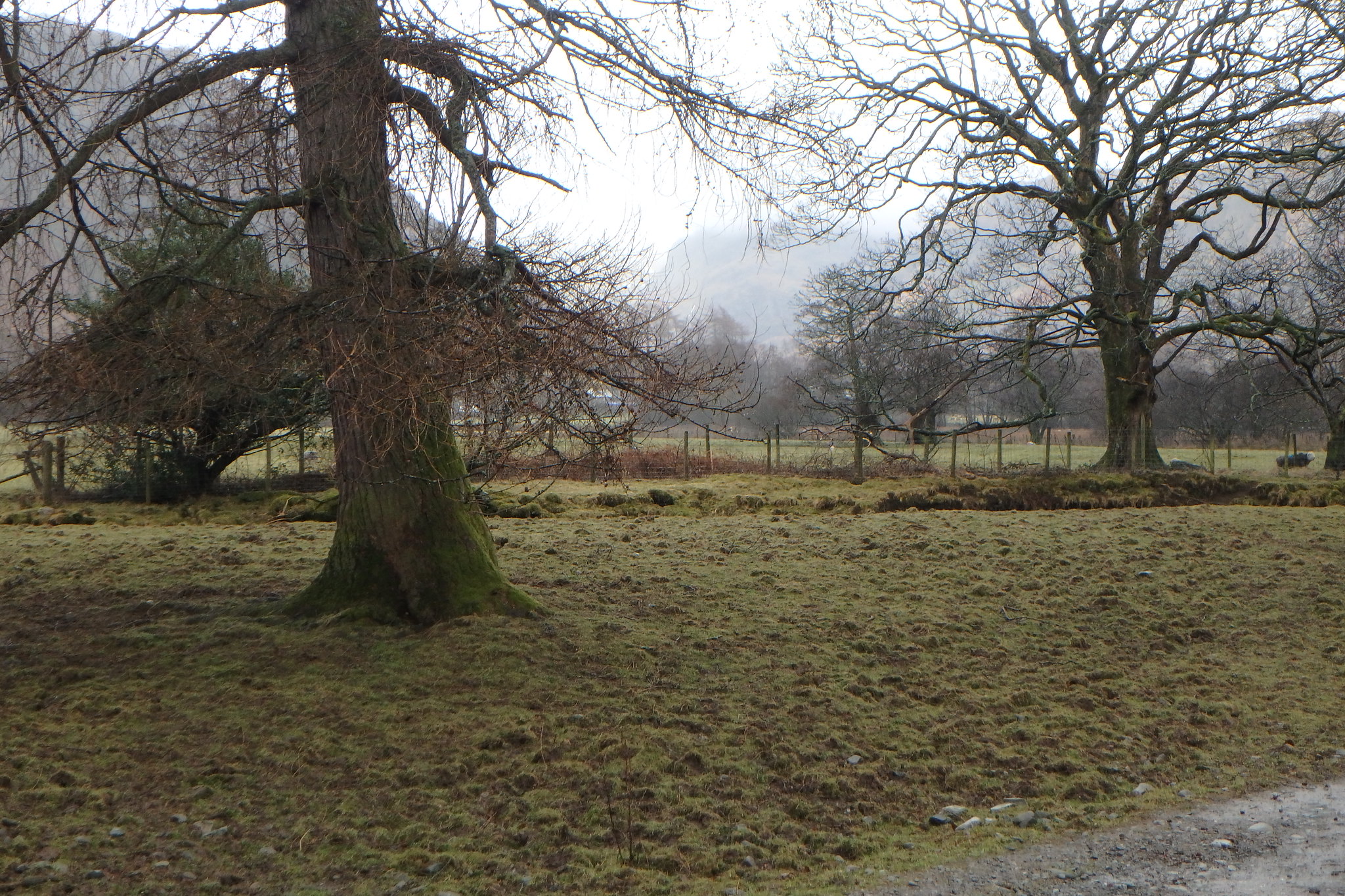 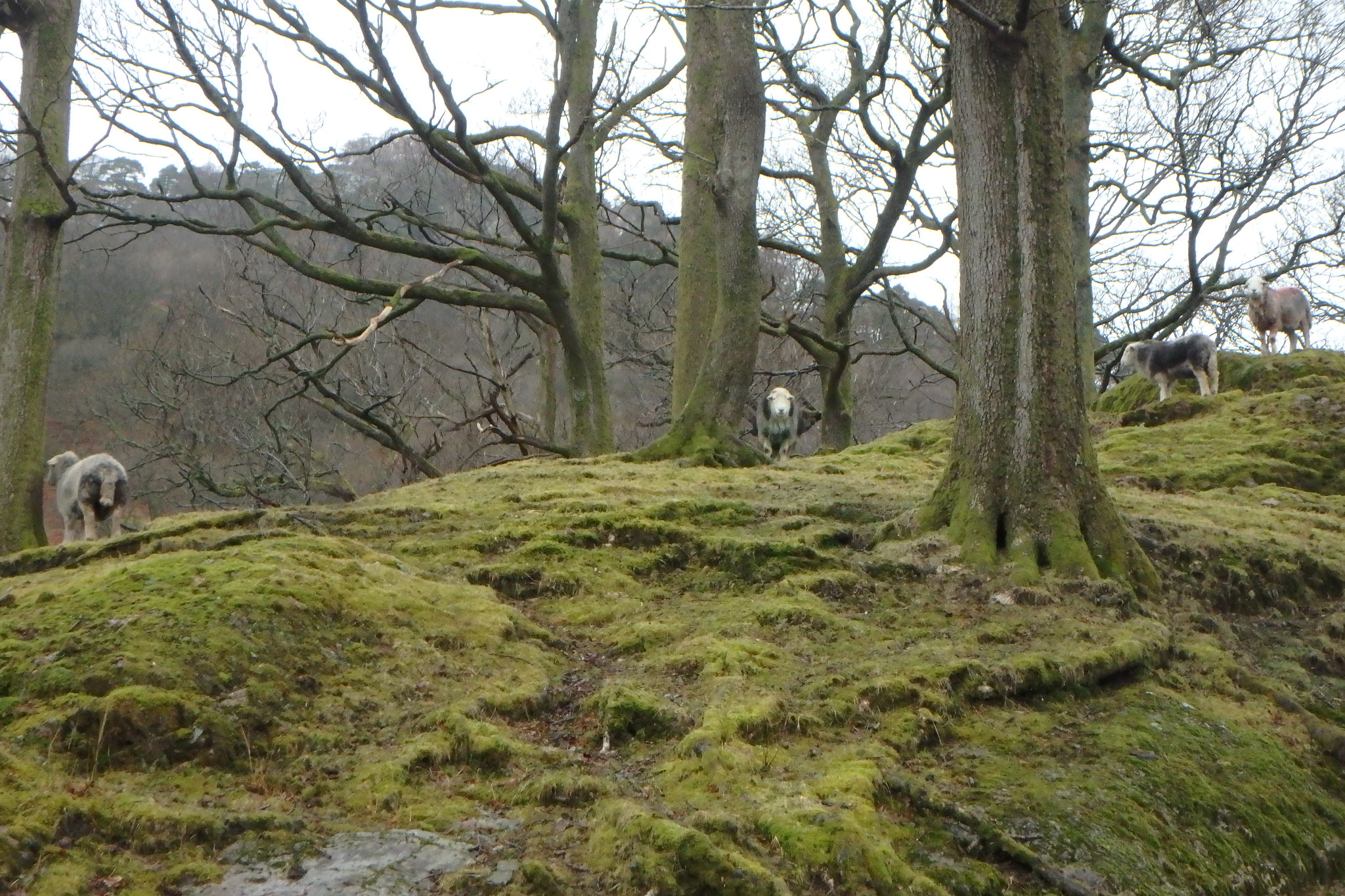 Views from Lingy Bank, towards Stonethwaite 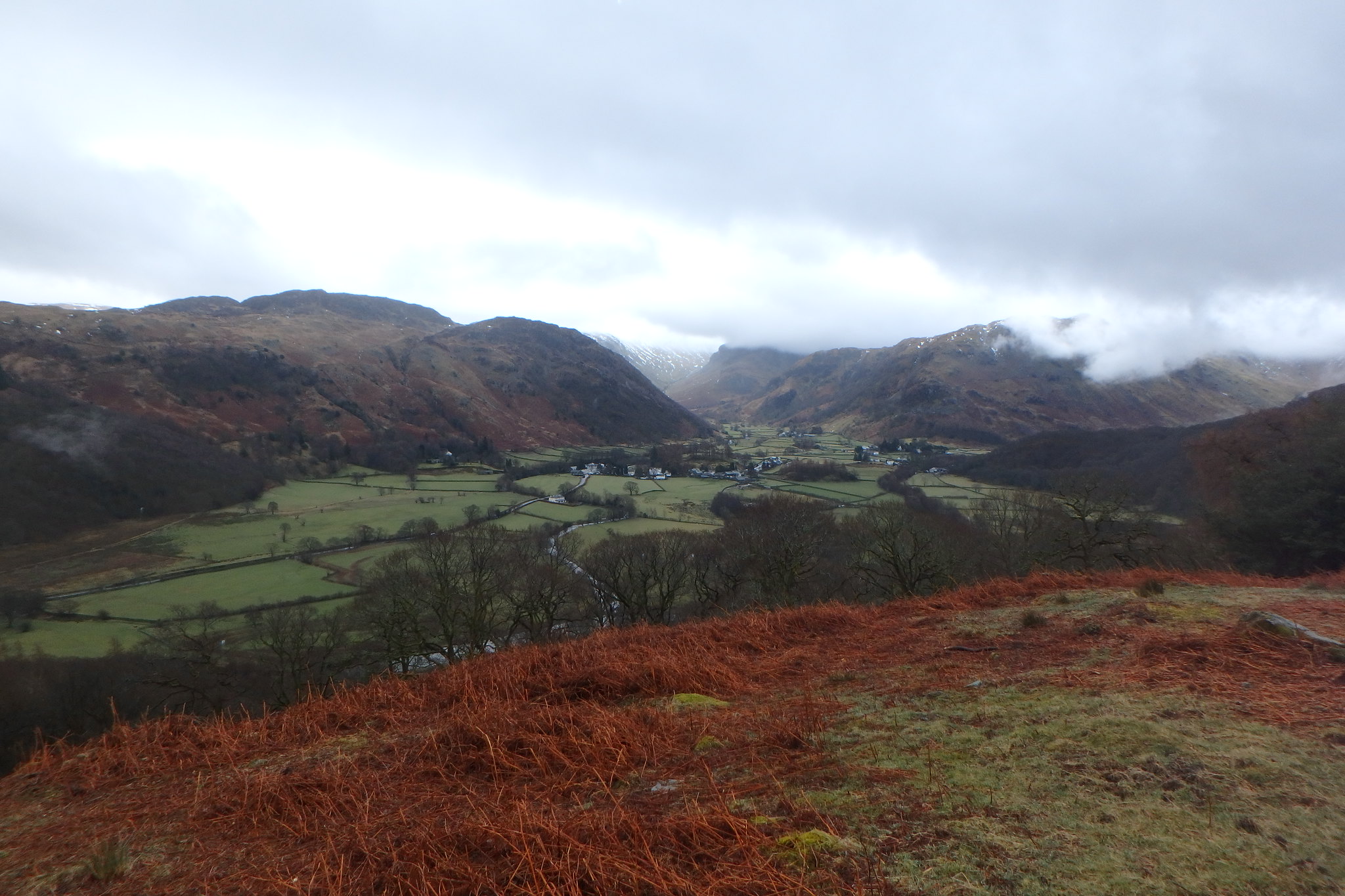 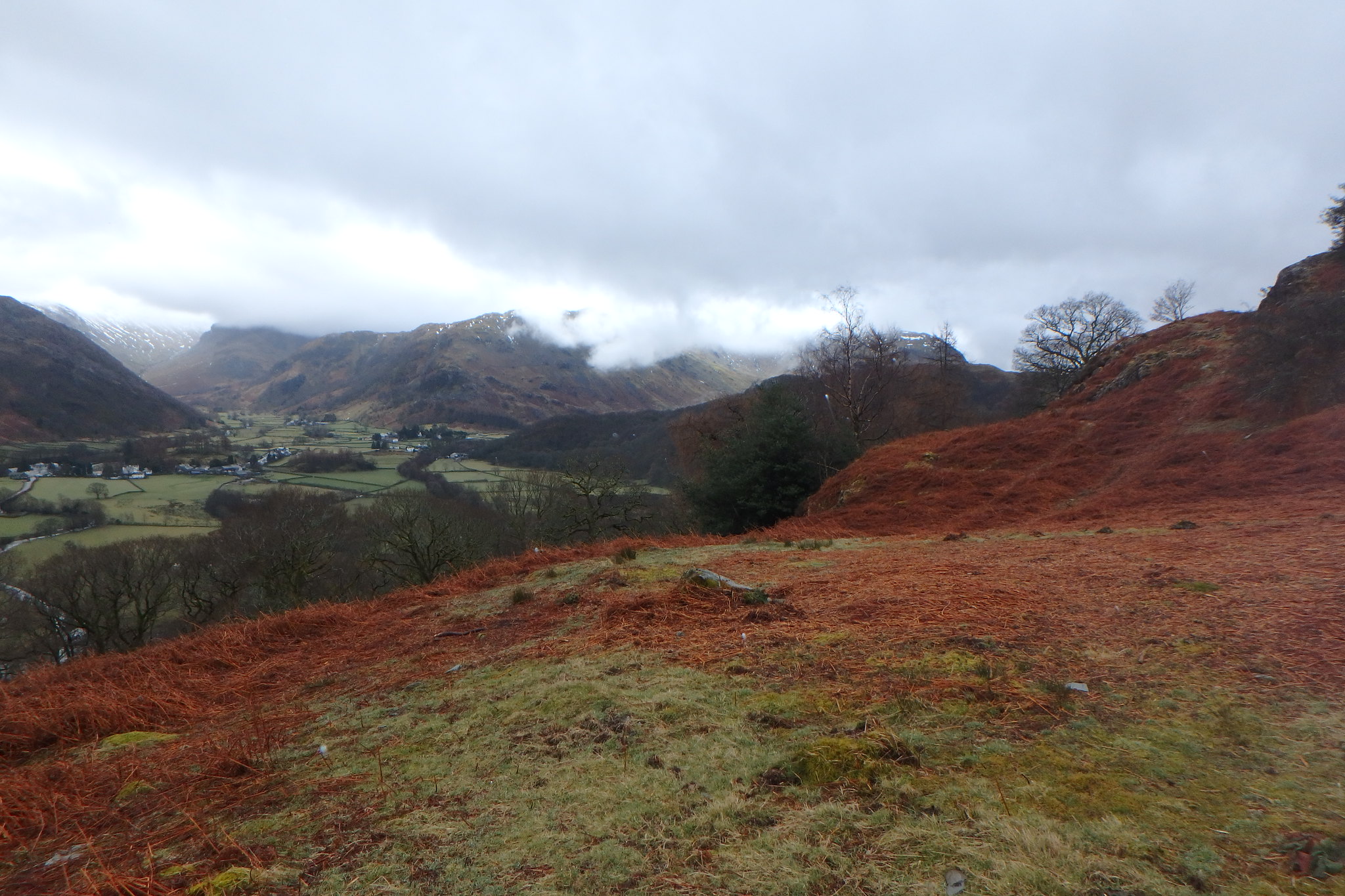 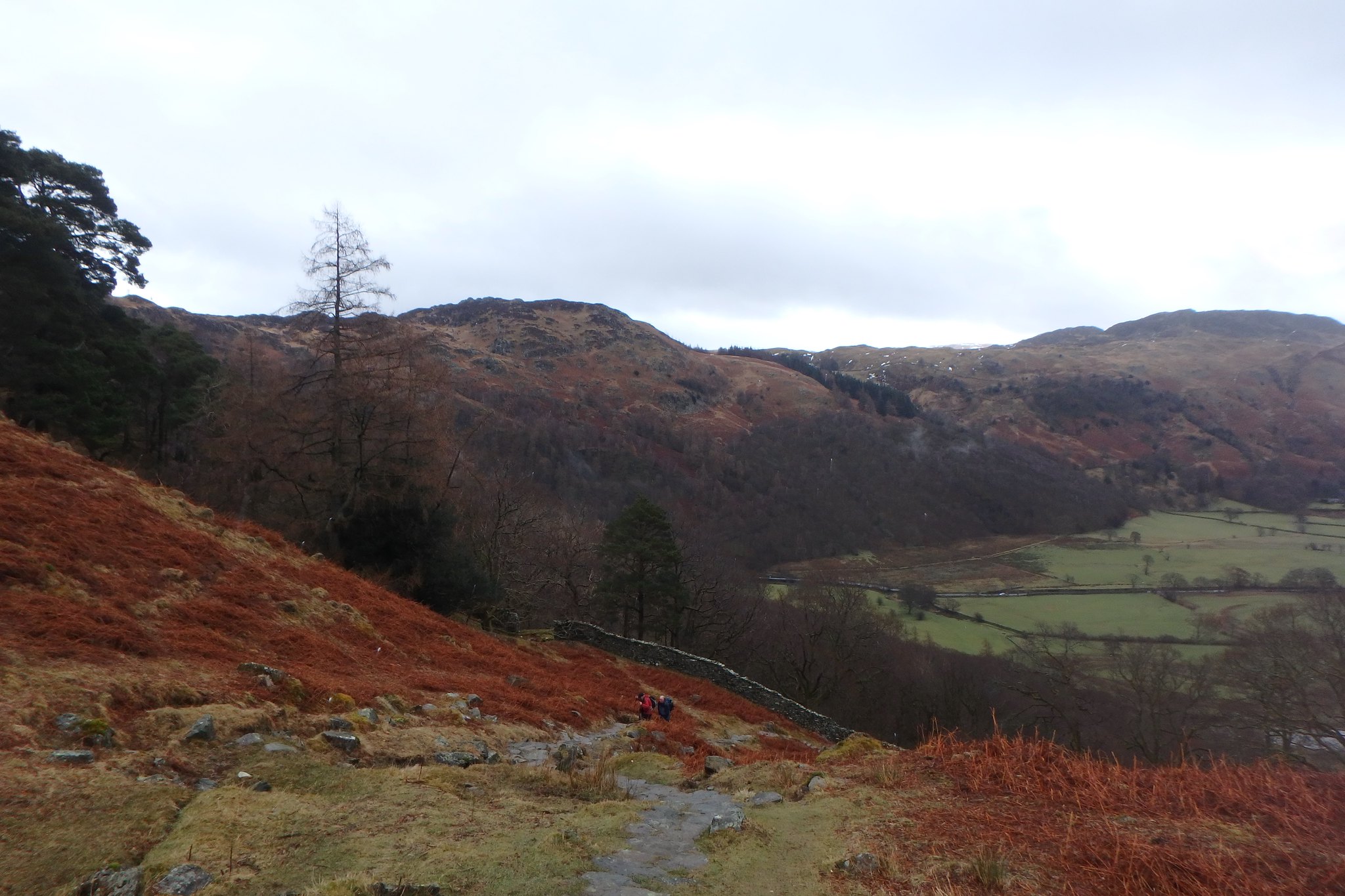 The views from the top were a bit muted today as the larger fells were wearing their cloudy hats, the rain didn't tempt us to stay long so after a couple of photo's we set off down the way we'd come. 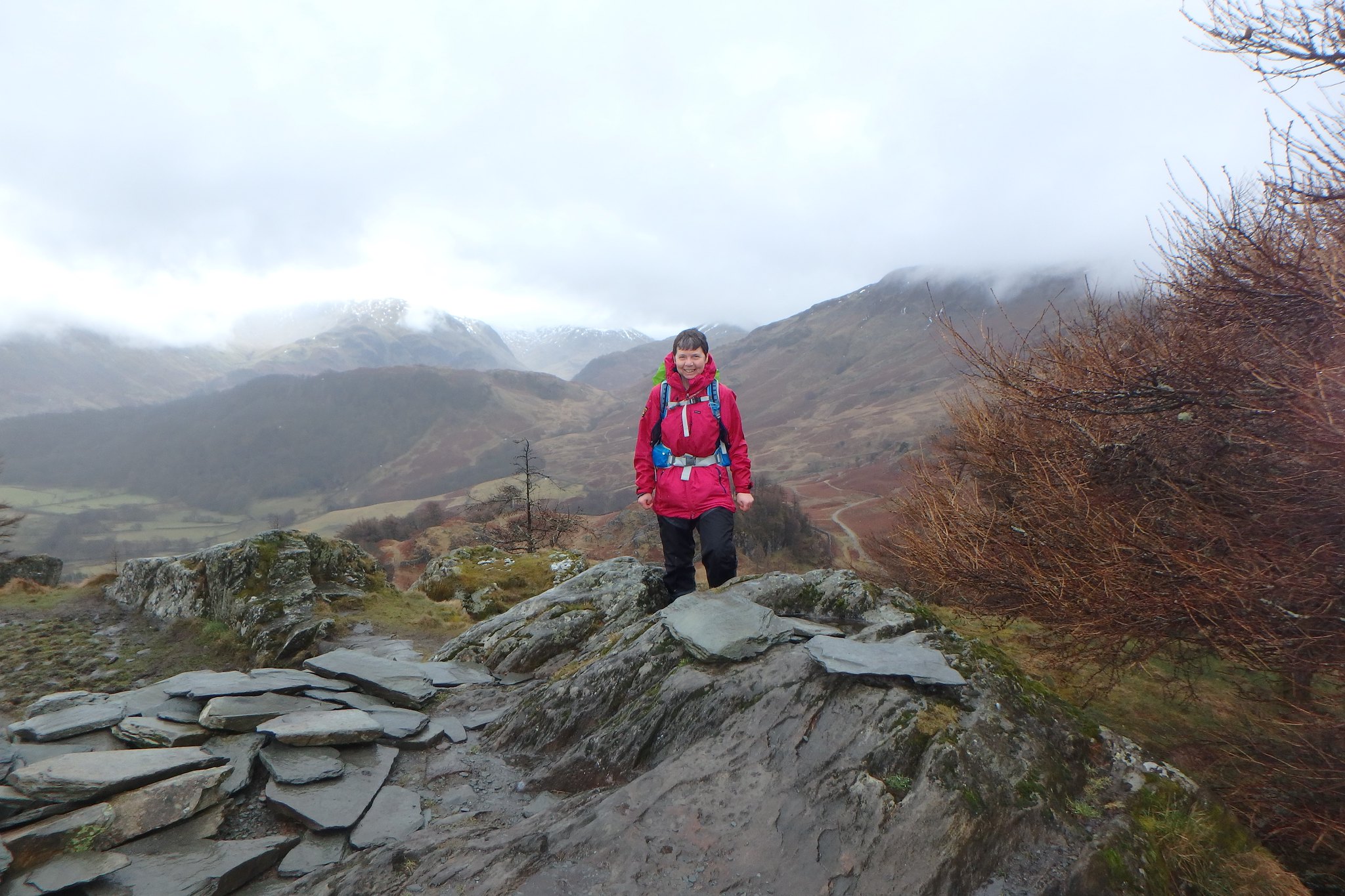 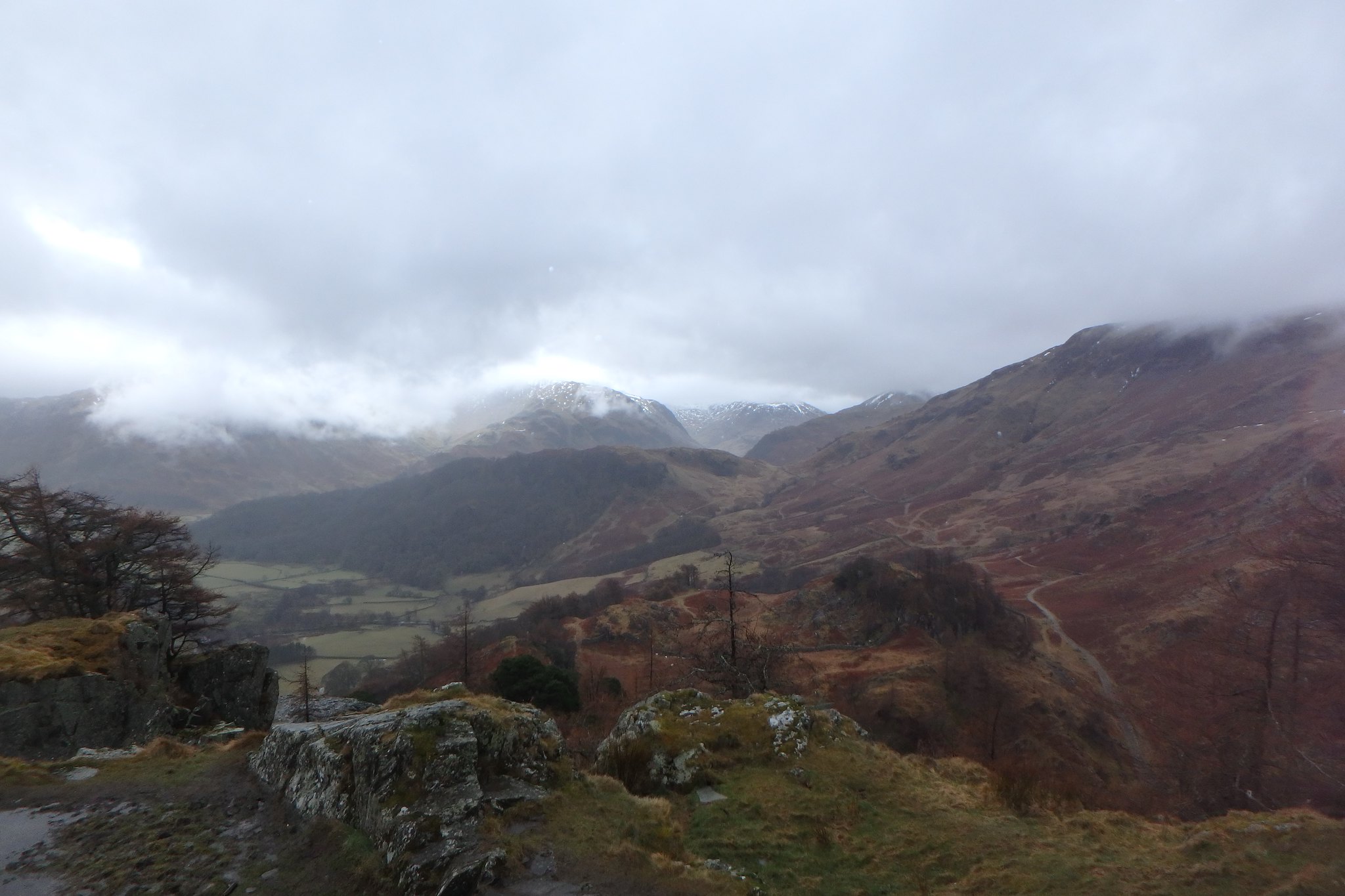 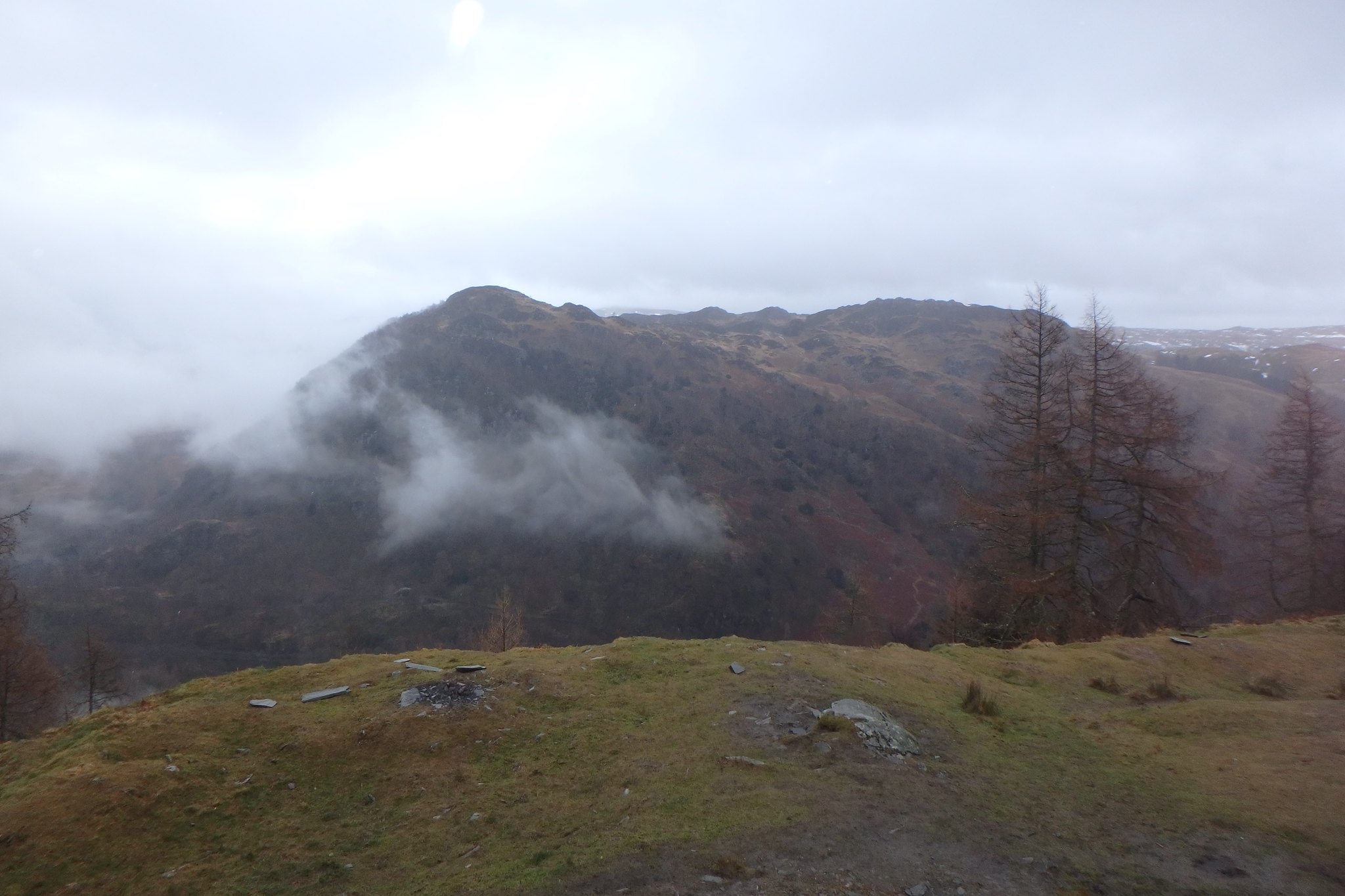 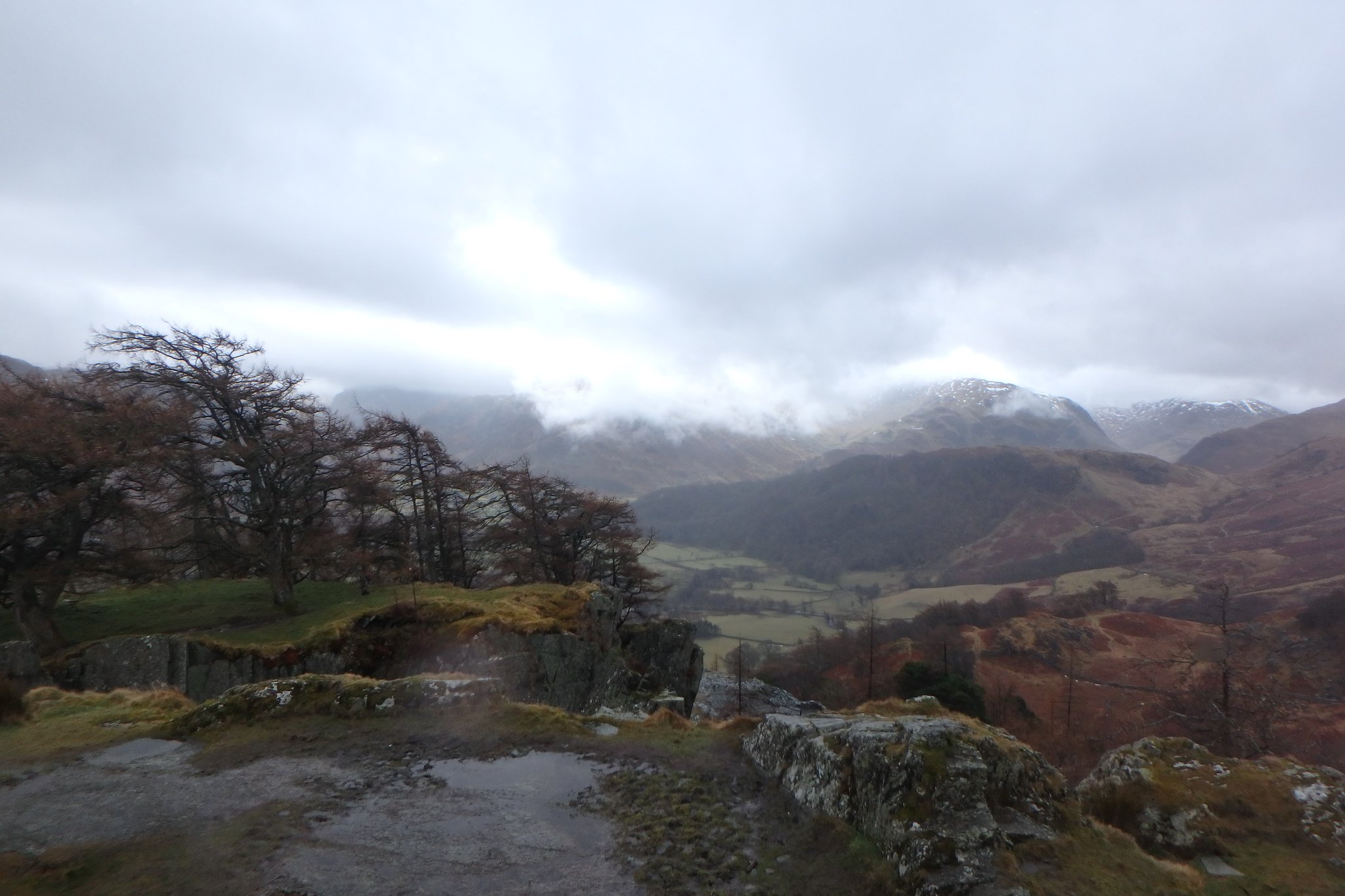 Grange Fell was next so after a quick pit stop by the car we set off to have a go at it and Great Crag if the rain lessened.
We went up the track signposted for Watendlath as far as Resting Stone (marked on the map) and turned left here onto a track that descends a bit towards a small plantation, there's a wall up to your right here with a ladder stile over it, we went this way and followed the path up to Kings How which was in the cloud,

On the way to Kings How 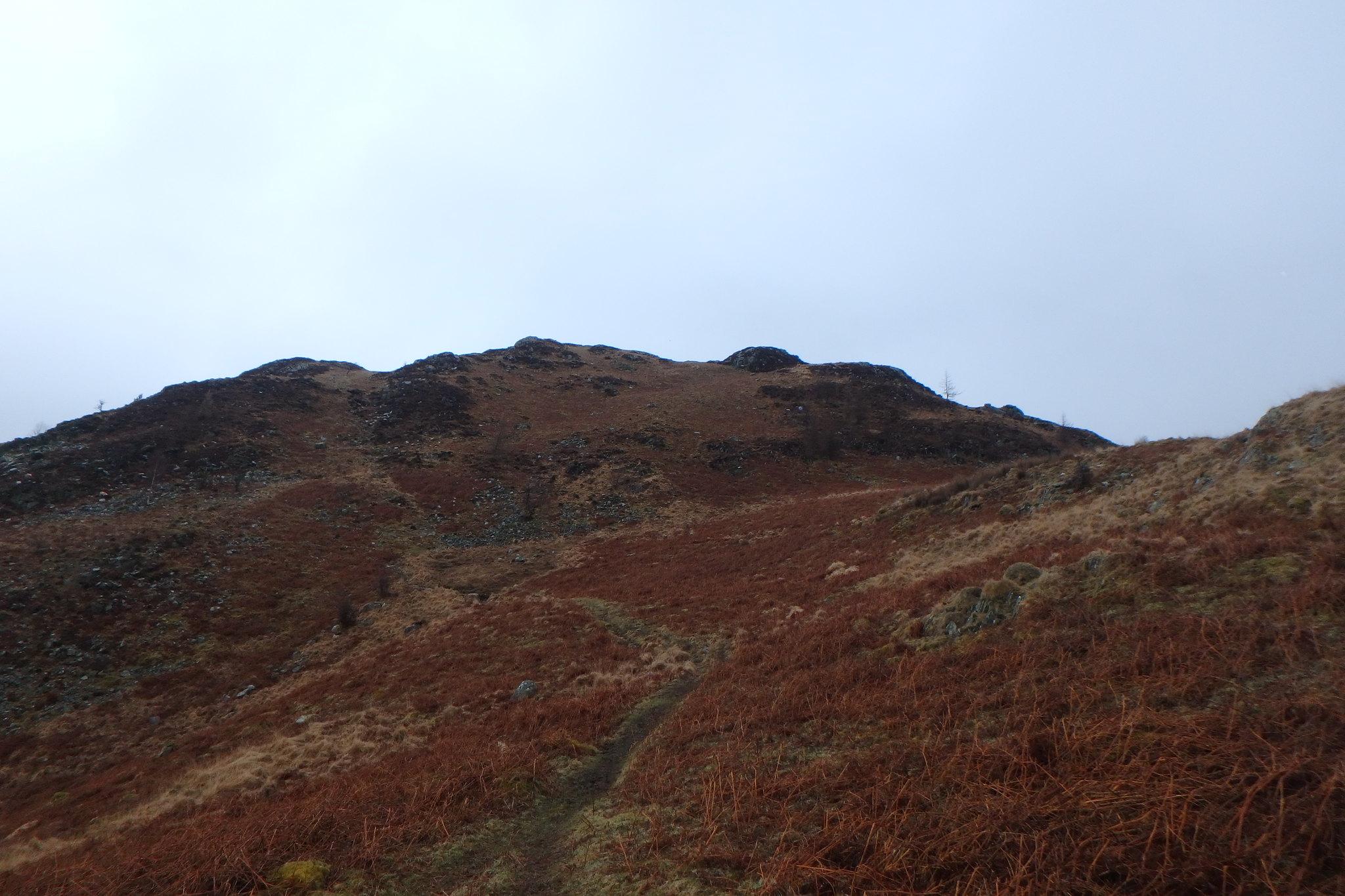 Then onto Brund Fell and the strangely named Jopplety How all the while in and out of the cloud,

Looking back to Kings How 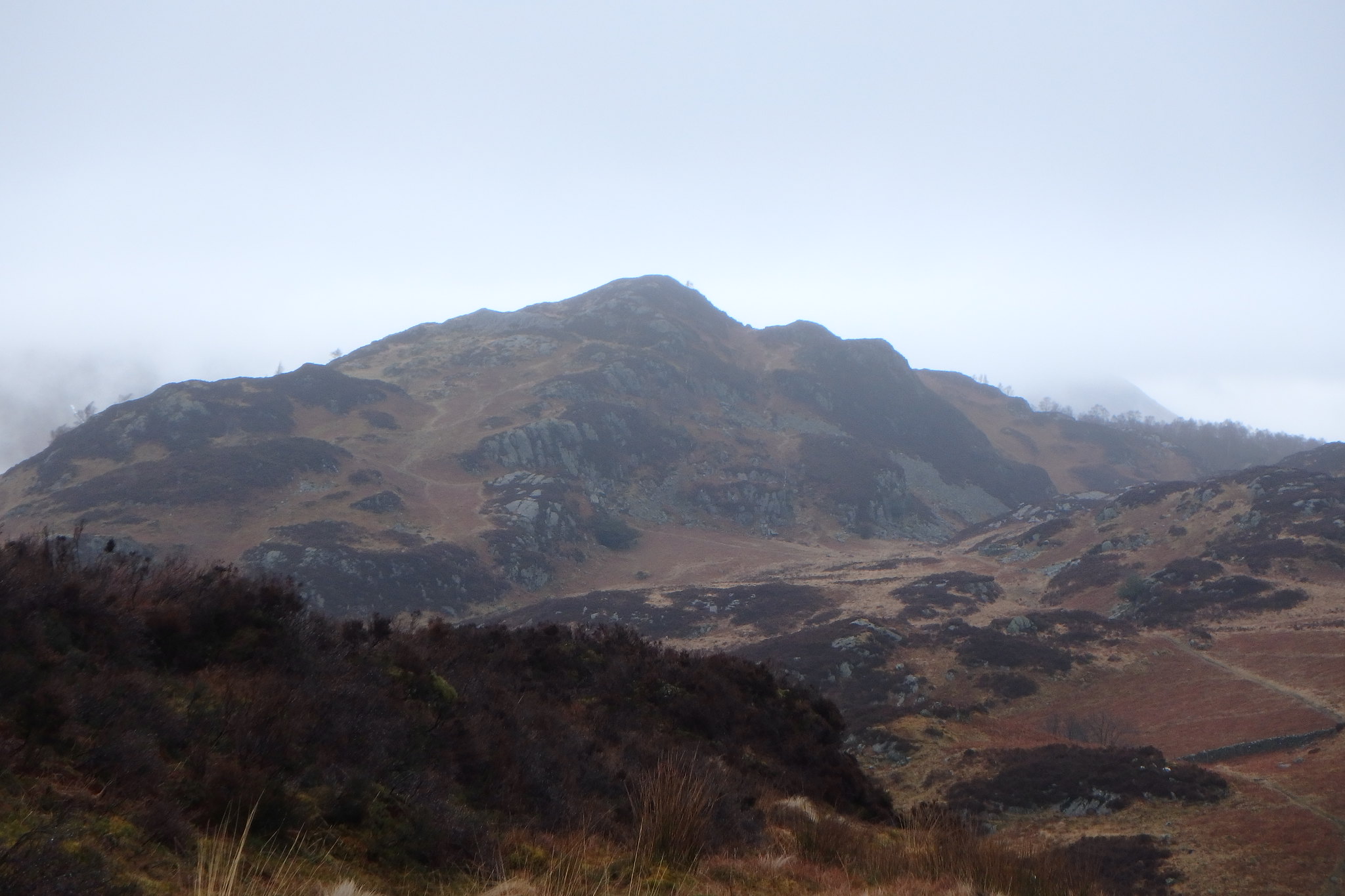 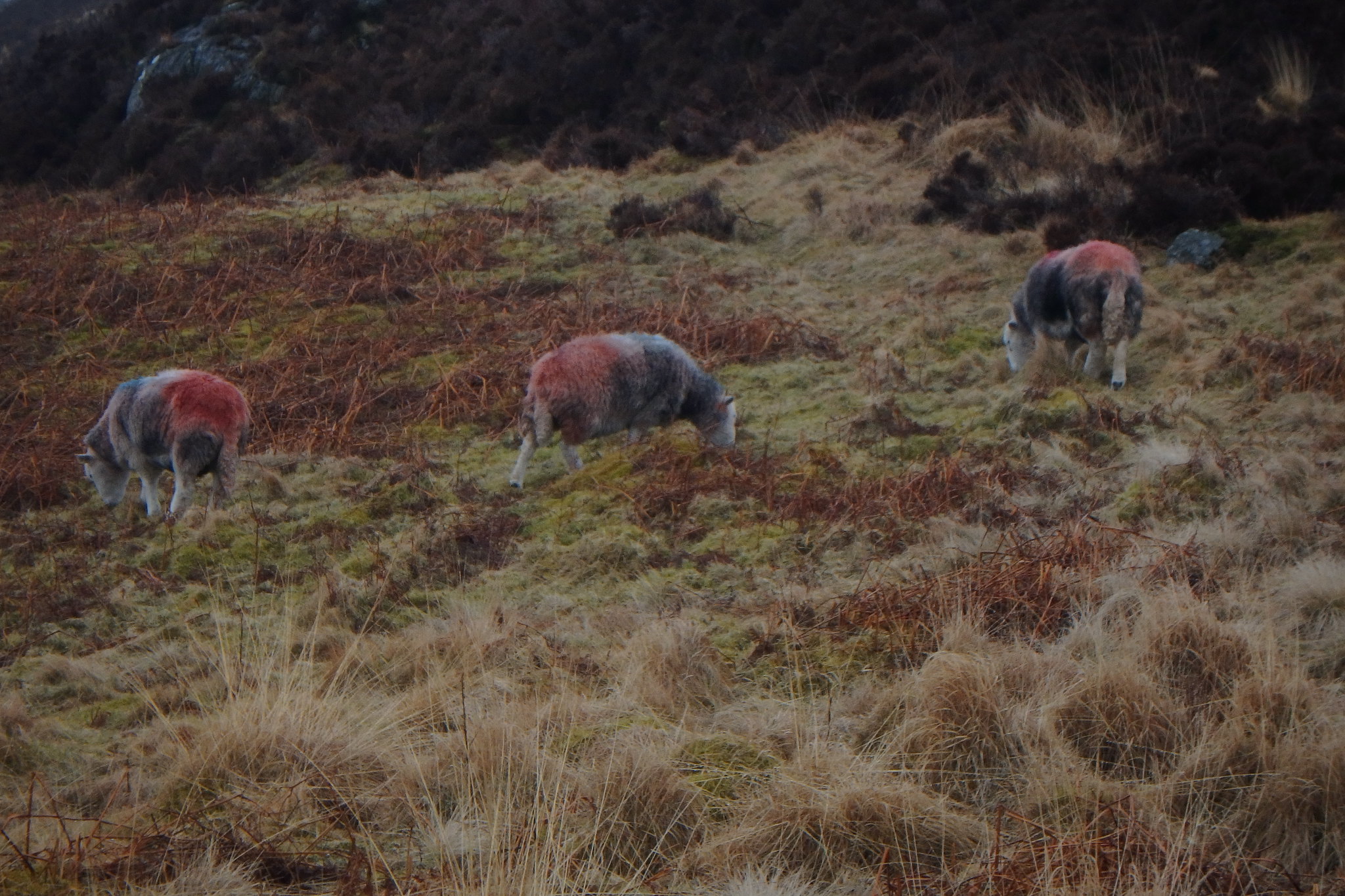 No views from the top, sadly, but Wainwright No:2 was achieved. By now the rain had turned to a steady drizzle so it didn't put us off going on to Great Crag. 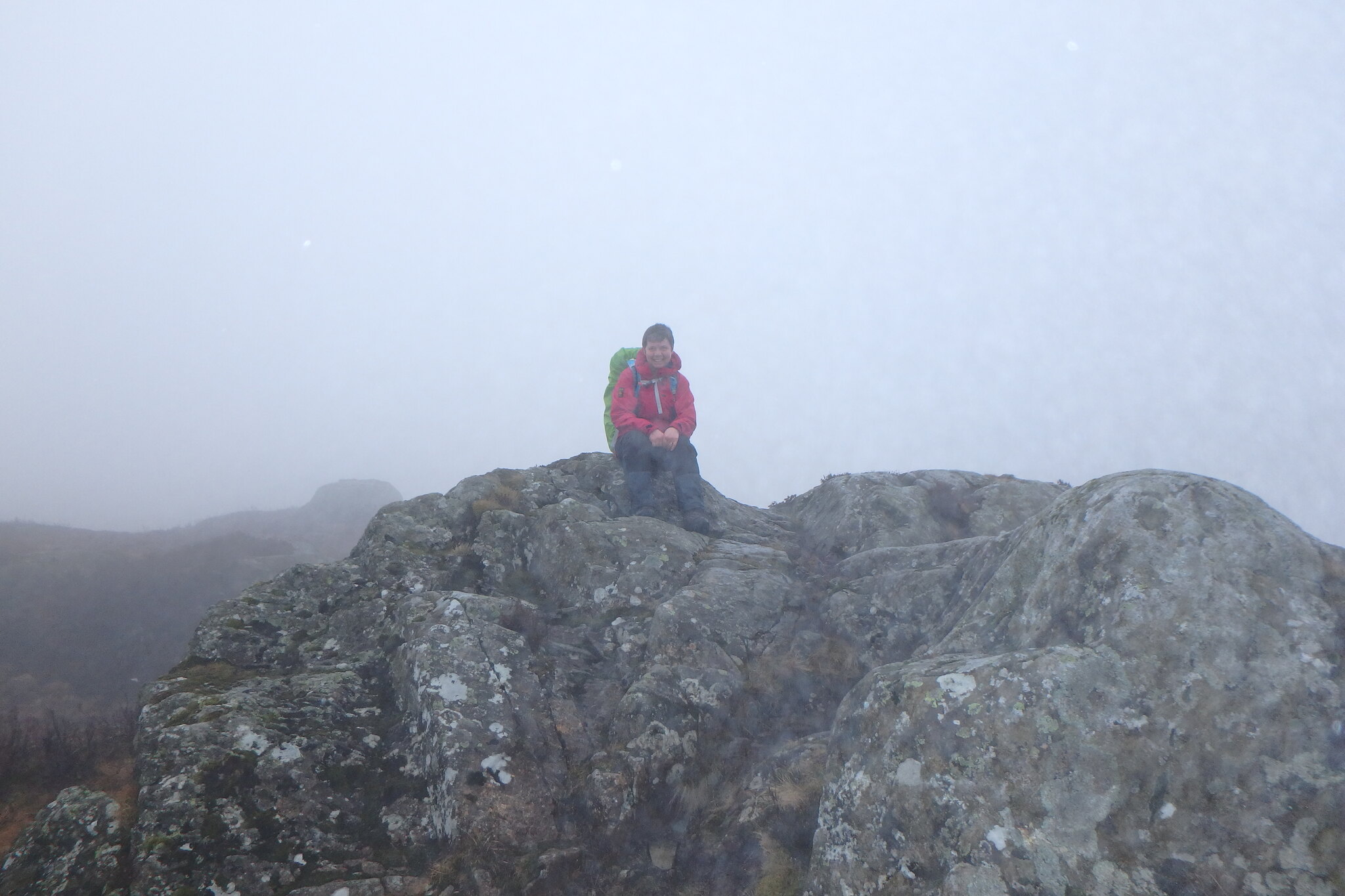 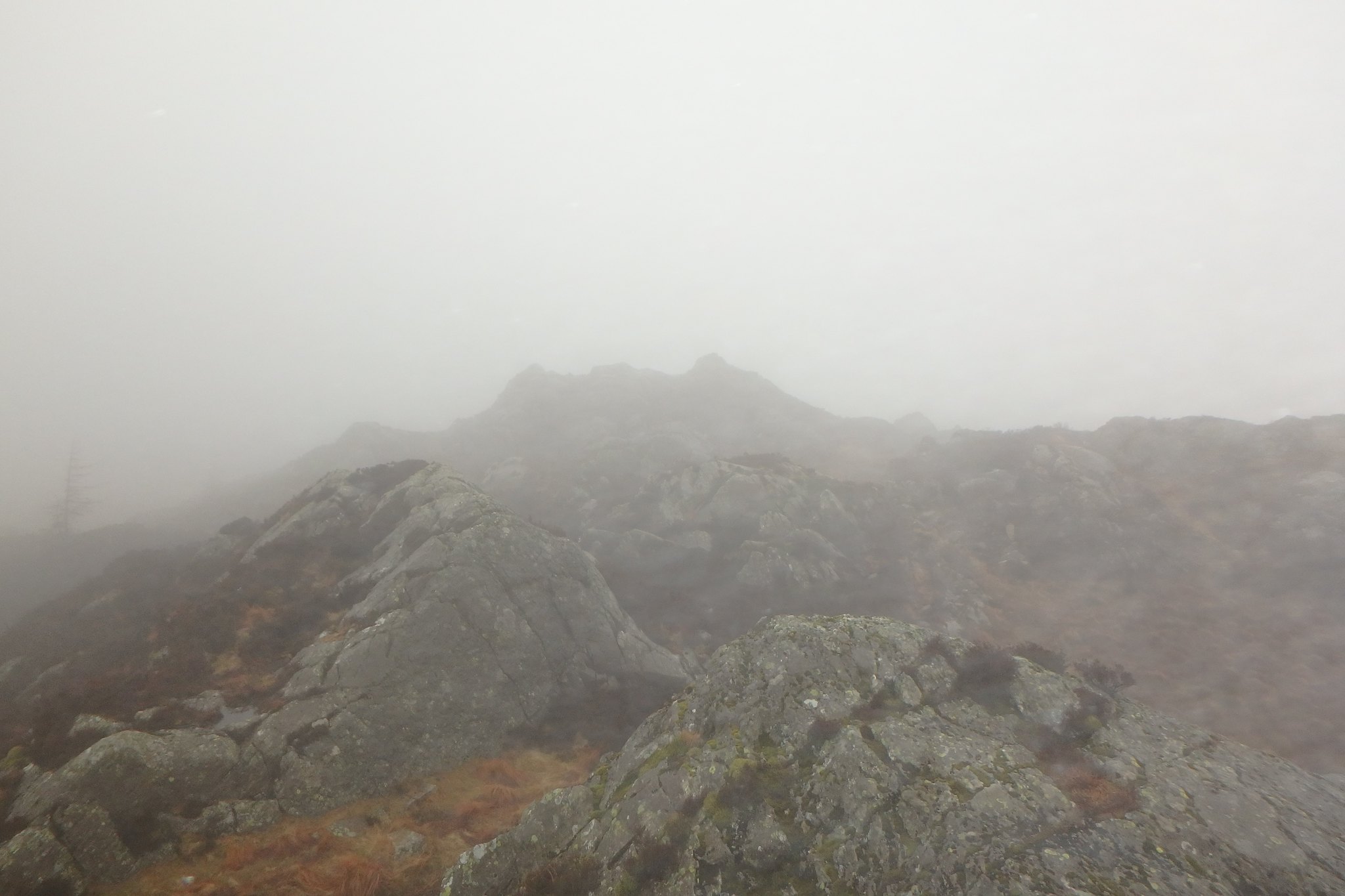 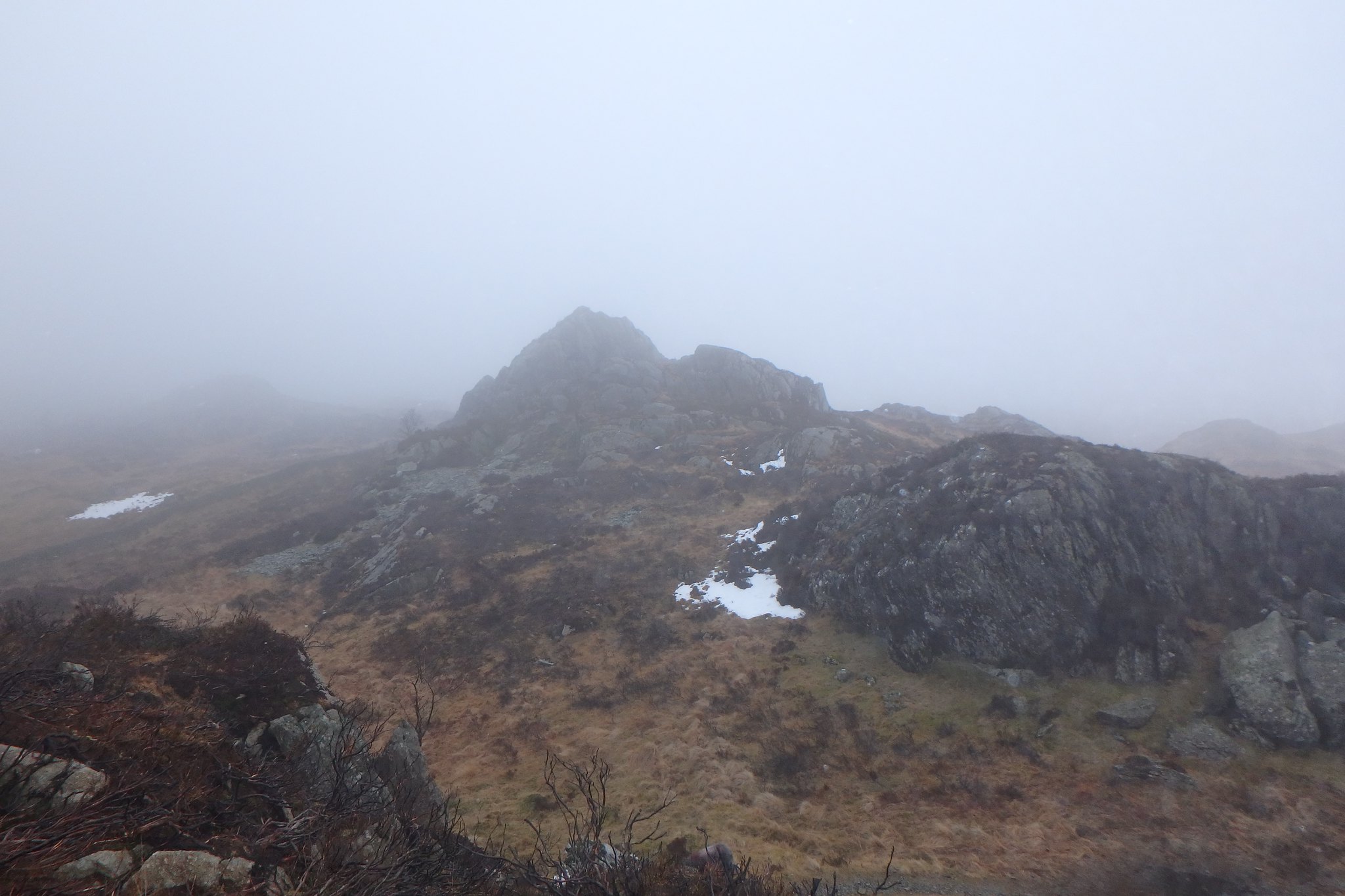 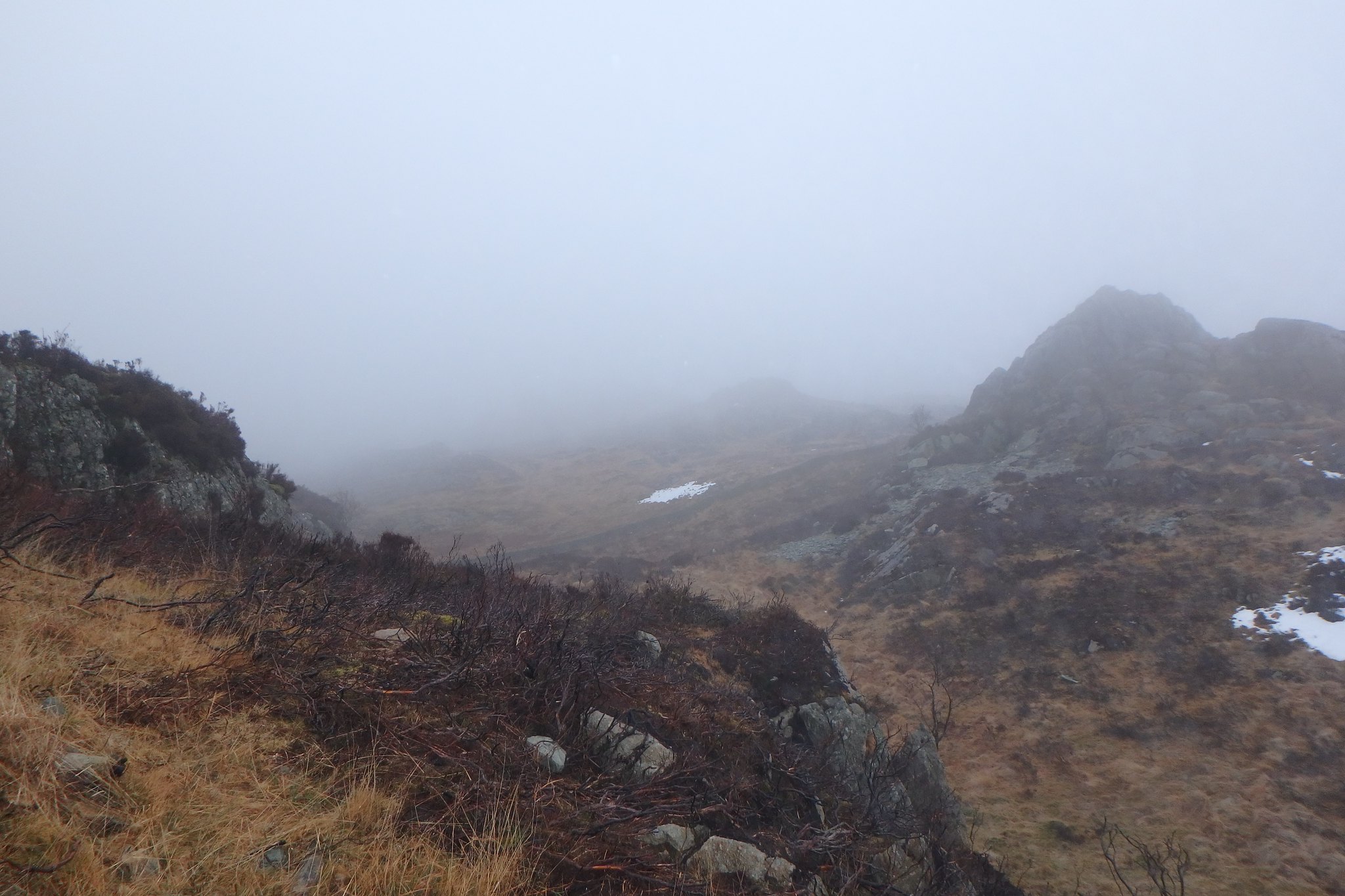 From Brund Fell we followed the wall down to Puddingstone Bank where it gets a bit soft and squidgy, there's a small sign beyond the gate in the wall encouraging you to follow the marker posts around the boggy bits which is advised as it is pretty wet underfoot here, the temptation would be to go straight ahead but, no, erosion has to be curbed somehow. The path does seem to take you away from where you want to be but stick with it because it swings right and joins the path that takes you toward Dock Tarn. At around NY272146 there's a small path on the right leading to the summit of Great Crag, on the top there's a cairn. No views again the cloud saw to that, Wainwright No:3 done, great stuff! 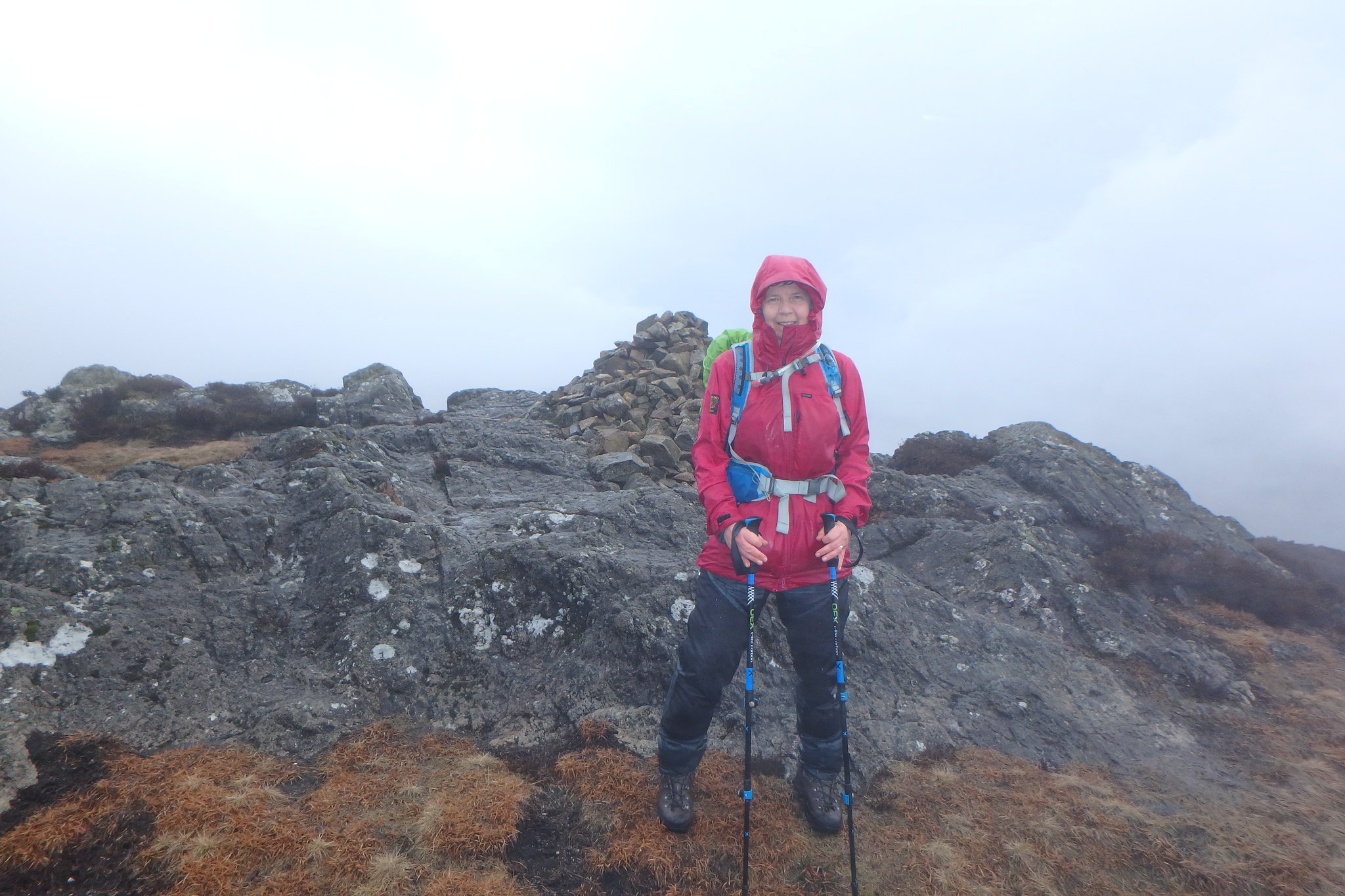 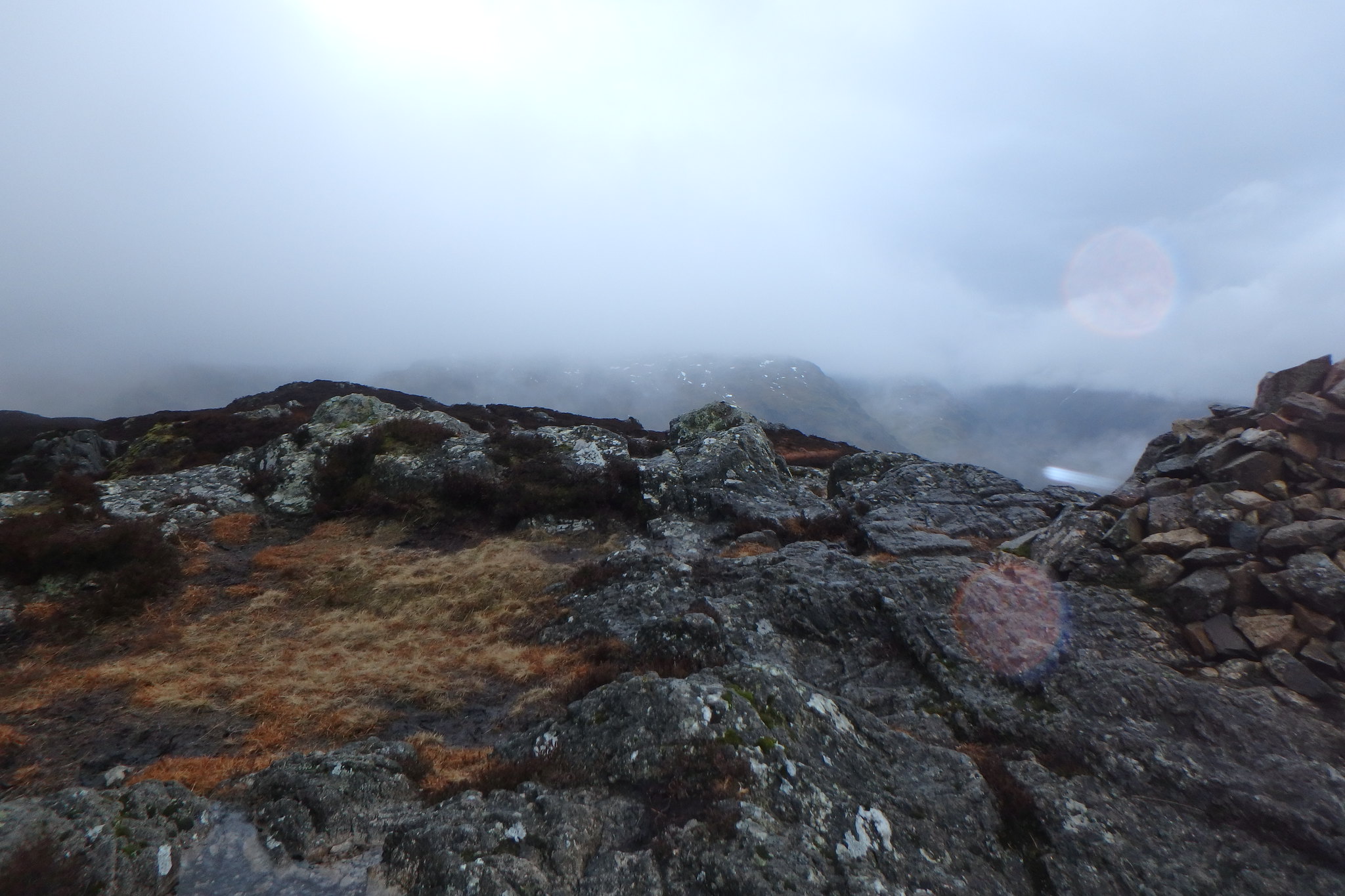 From the summit we worked our way back to the main path, went past Dock Tarn which was a bit eirie in the mist and followed it down to Lingy End. 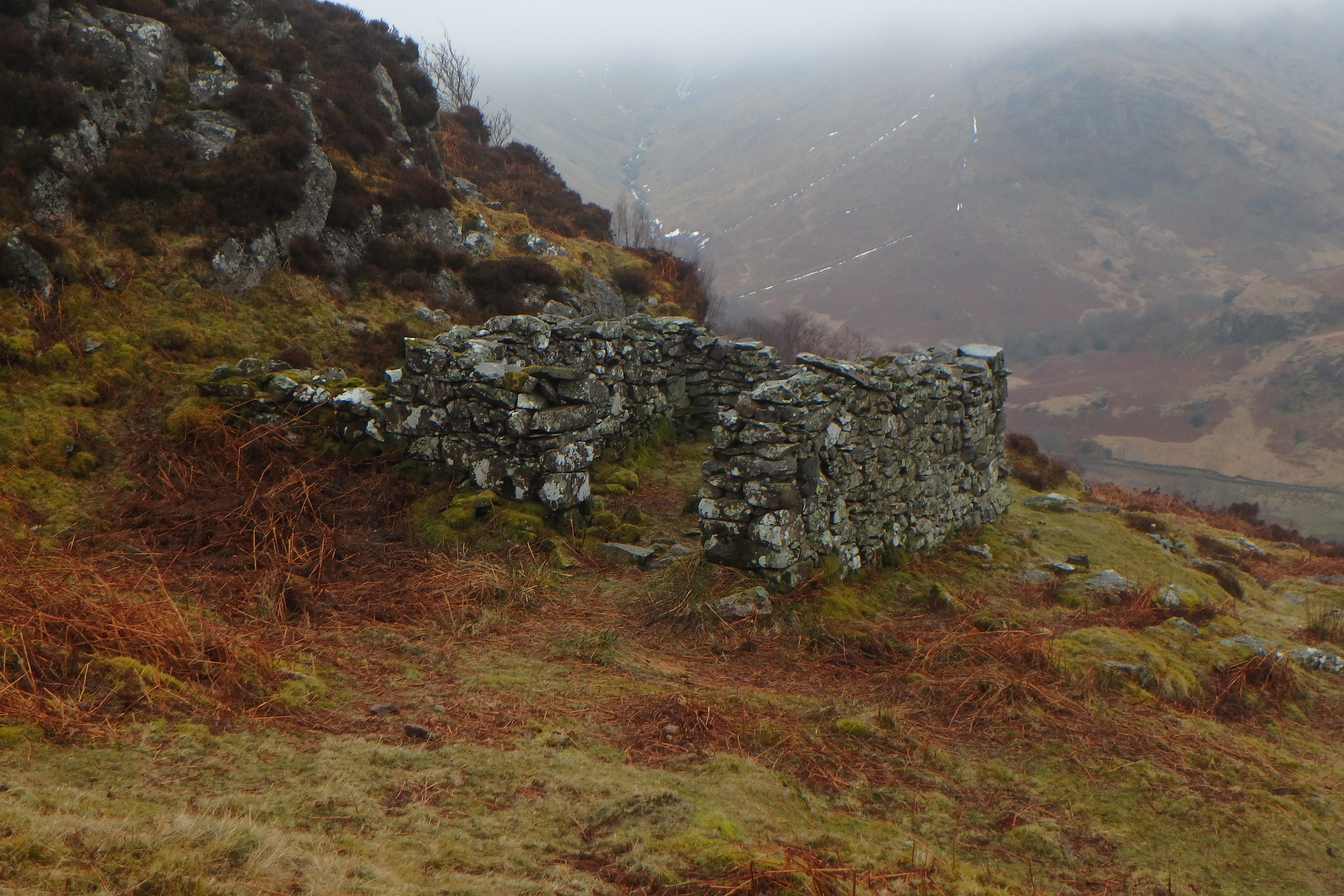 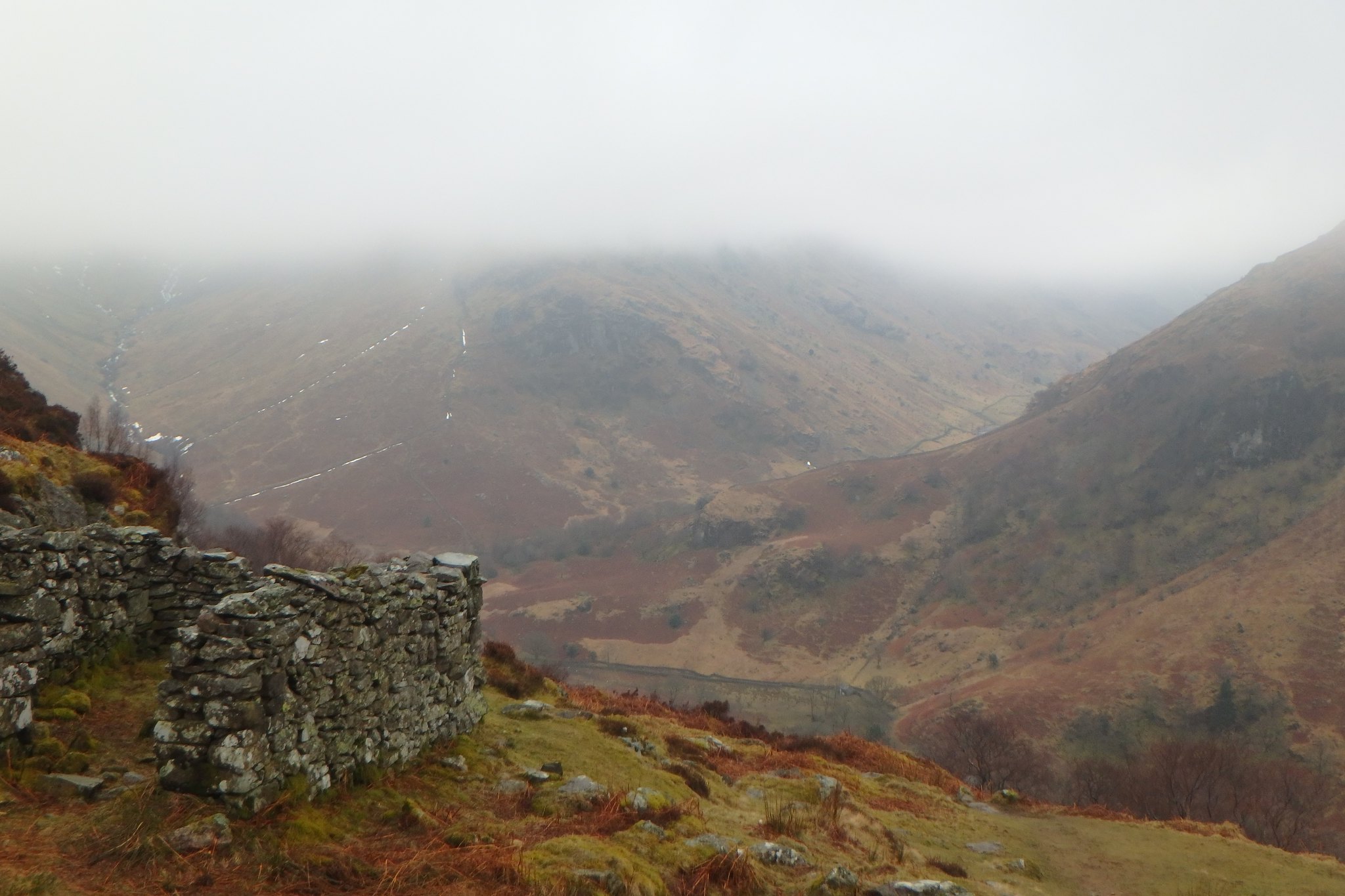 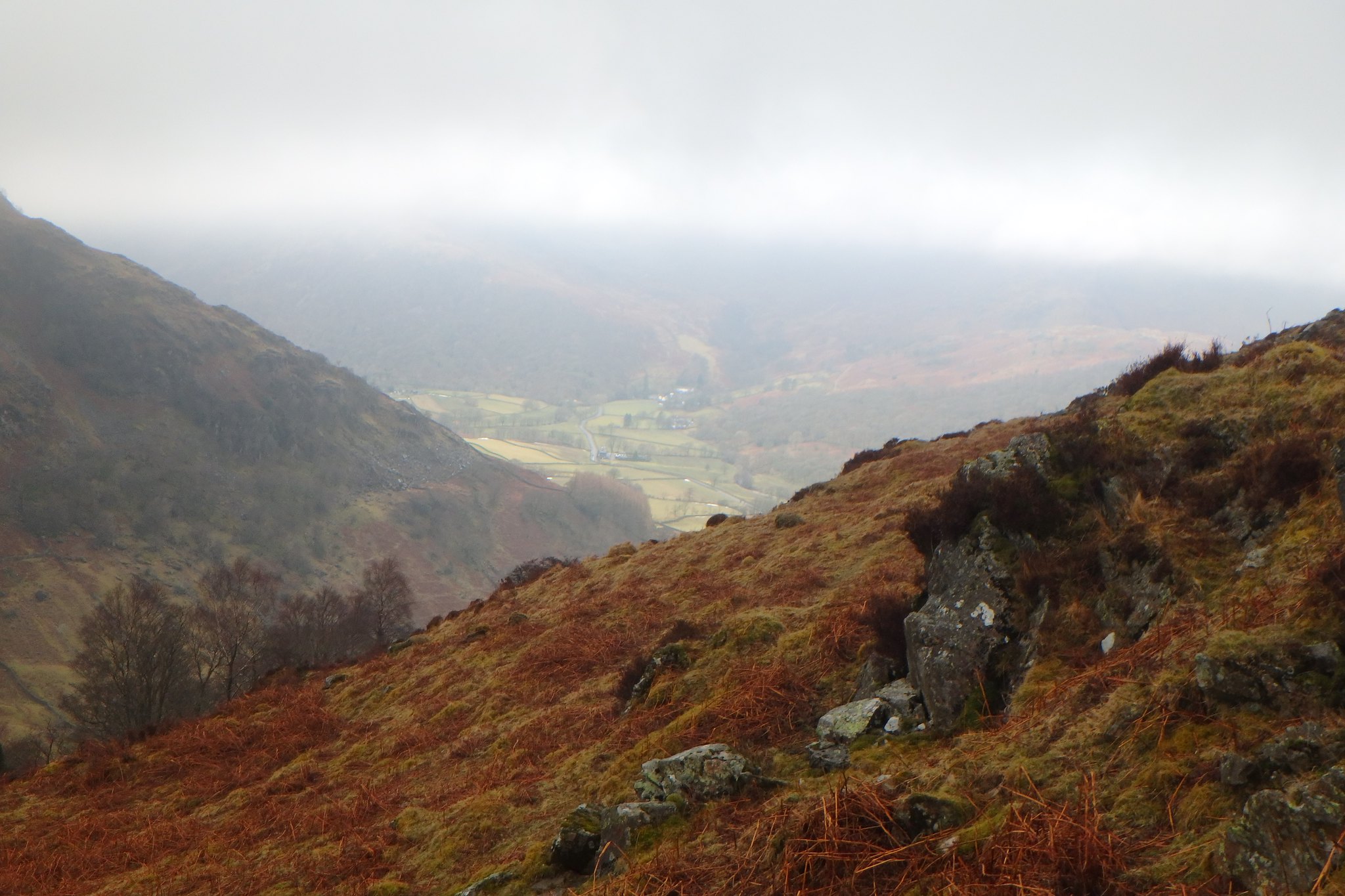 Here the path becomes very steep but pitched, care is needed here especially when wet, the stones are slippy and a bit uneven as the path descends through the trees, we were both thankful when we arrived at the bottom. from here we joined the Cumbria Way back to Rosthwaite.

Nearly on level ground at last!!!! 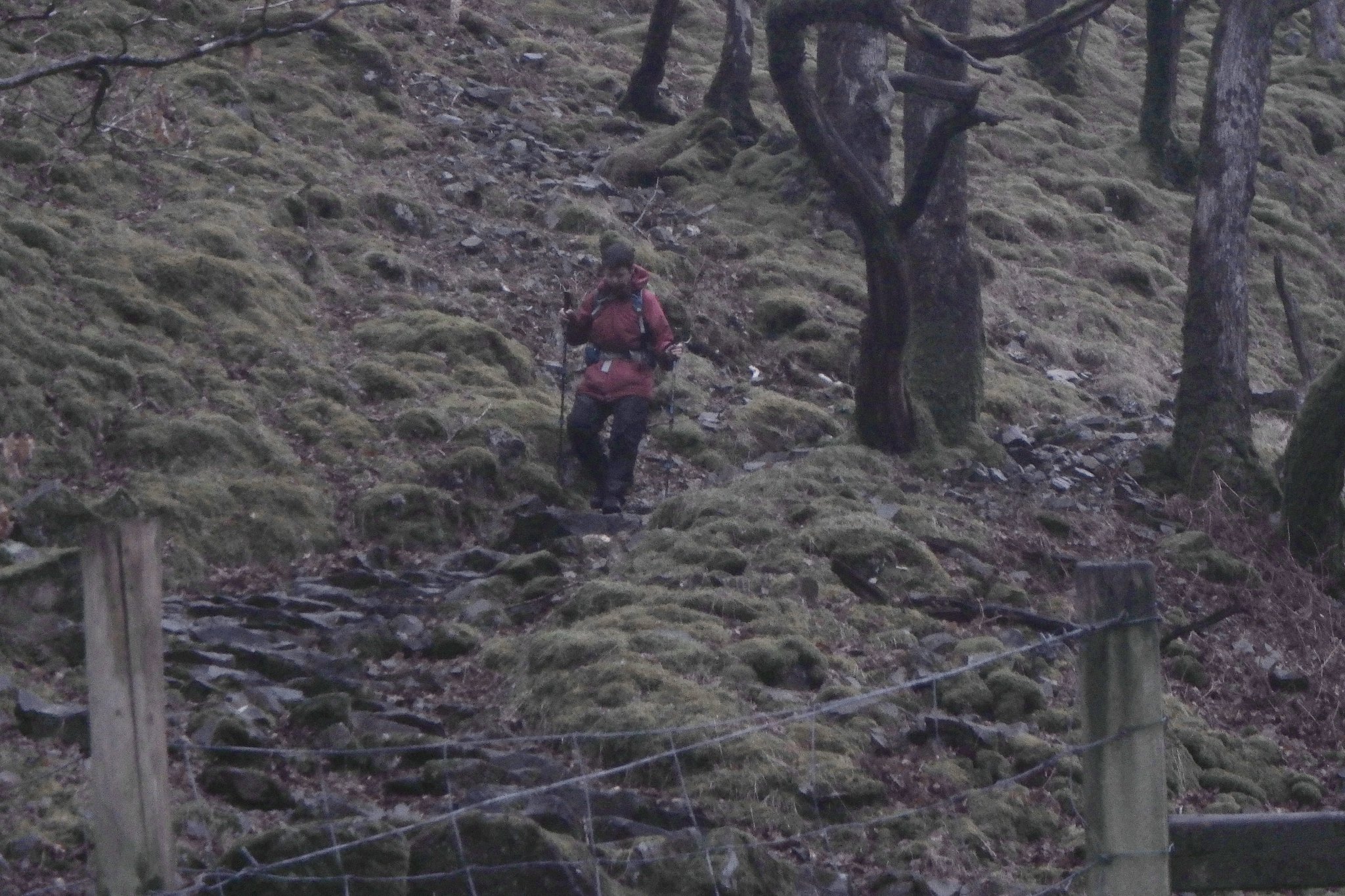 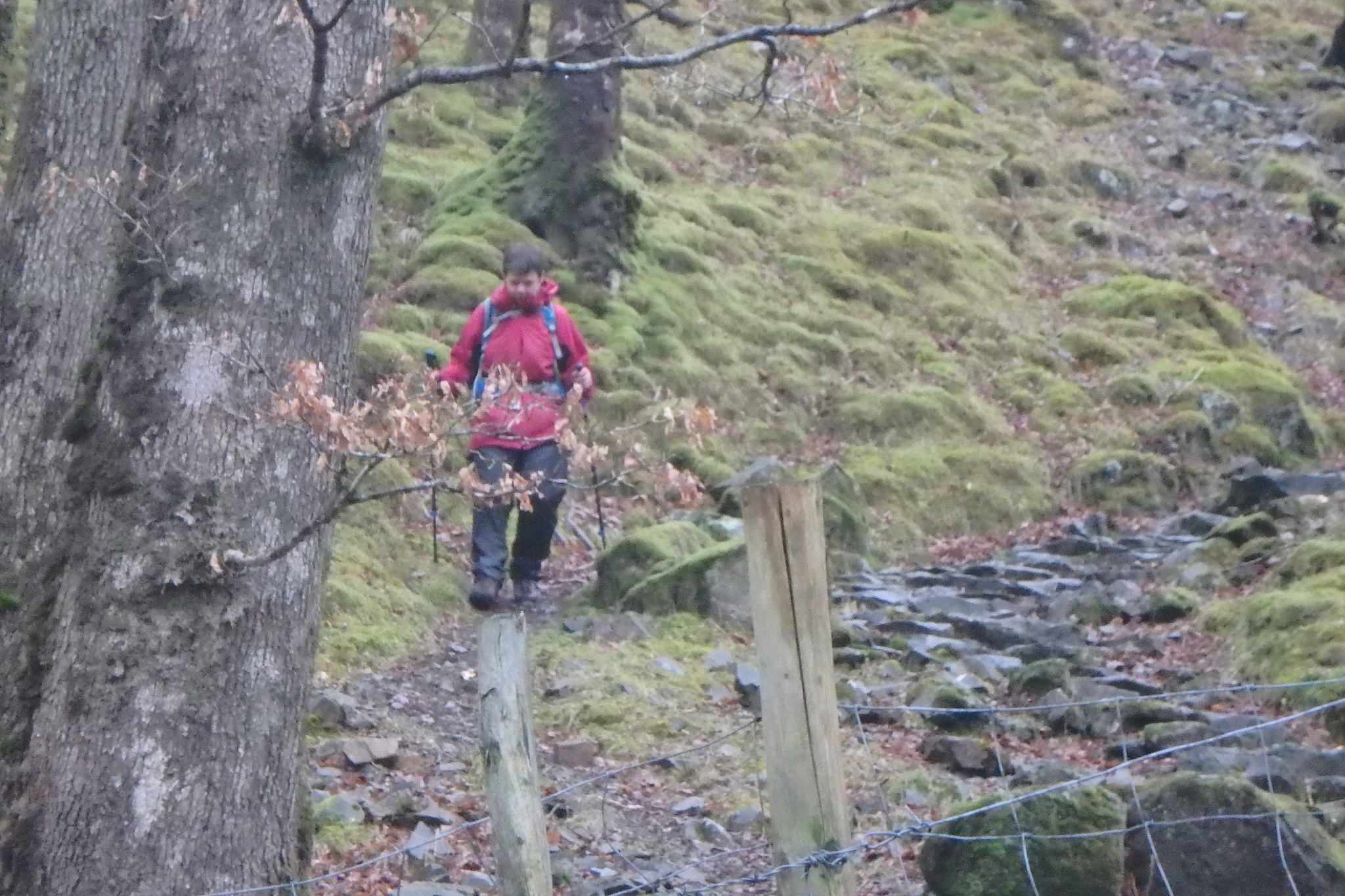 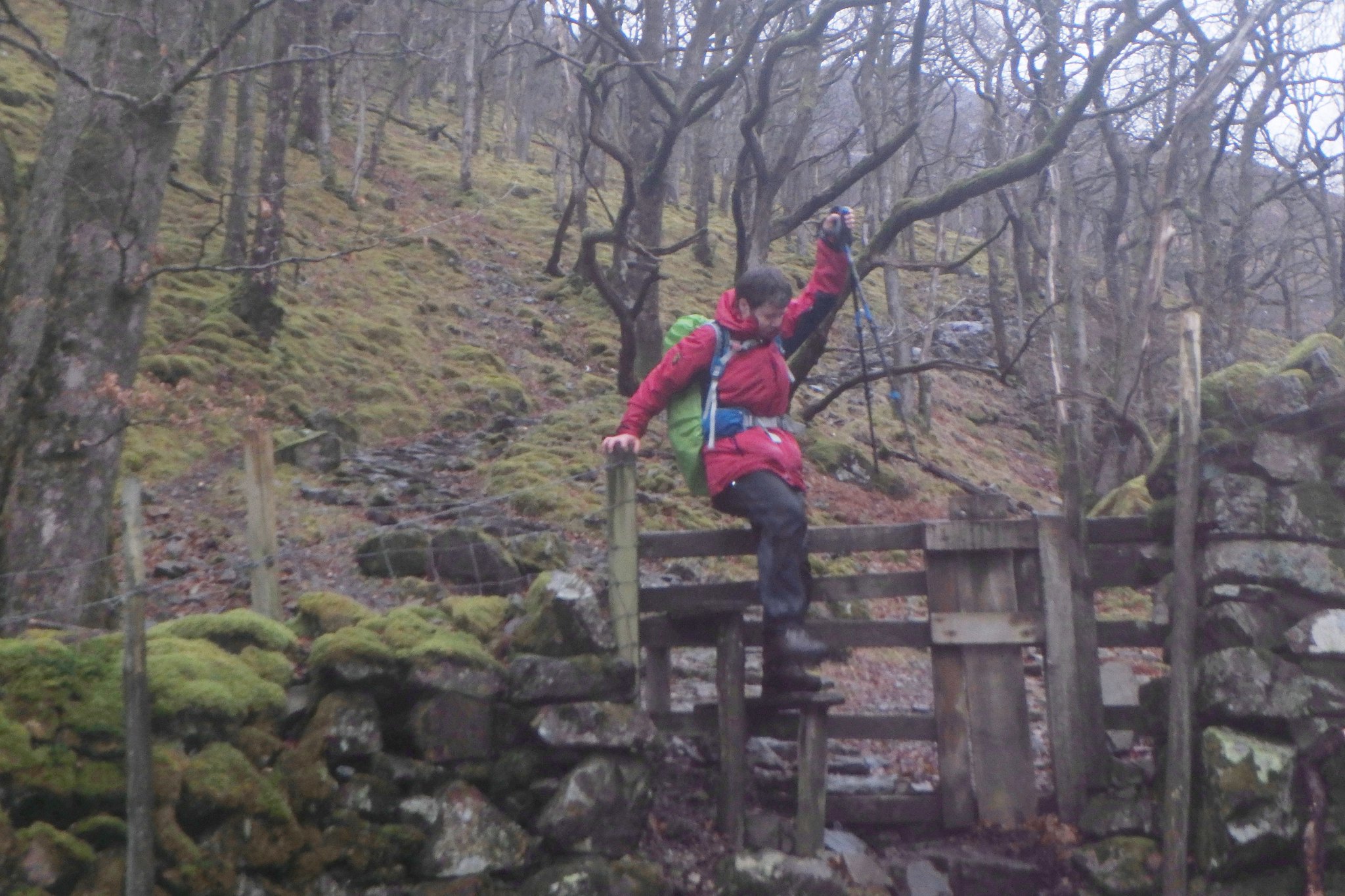 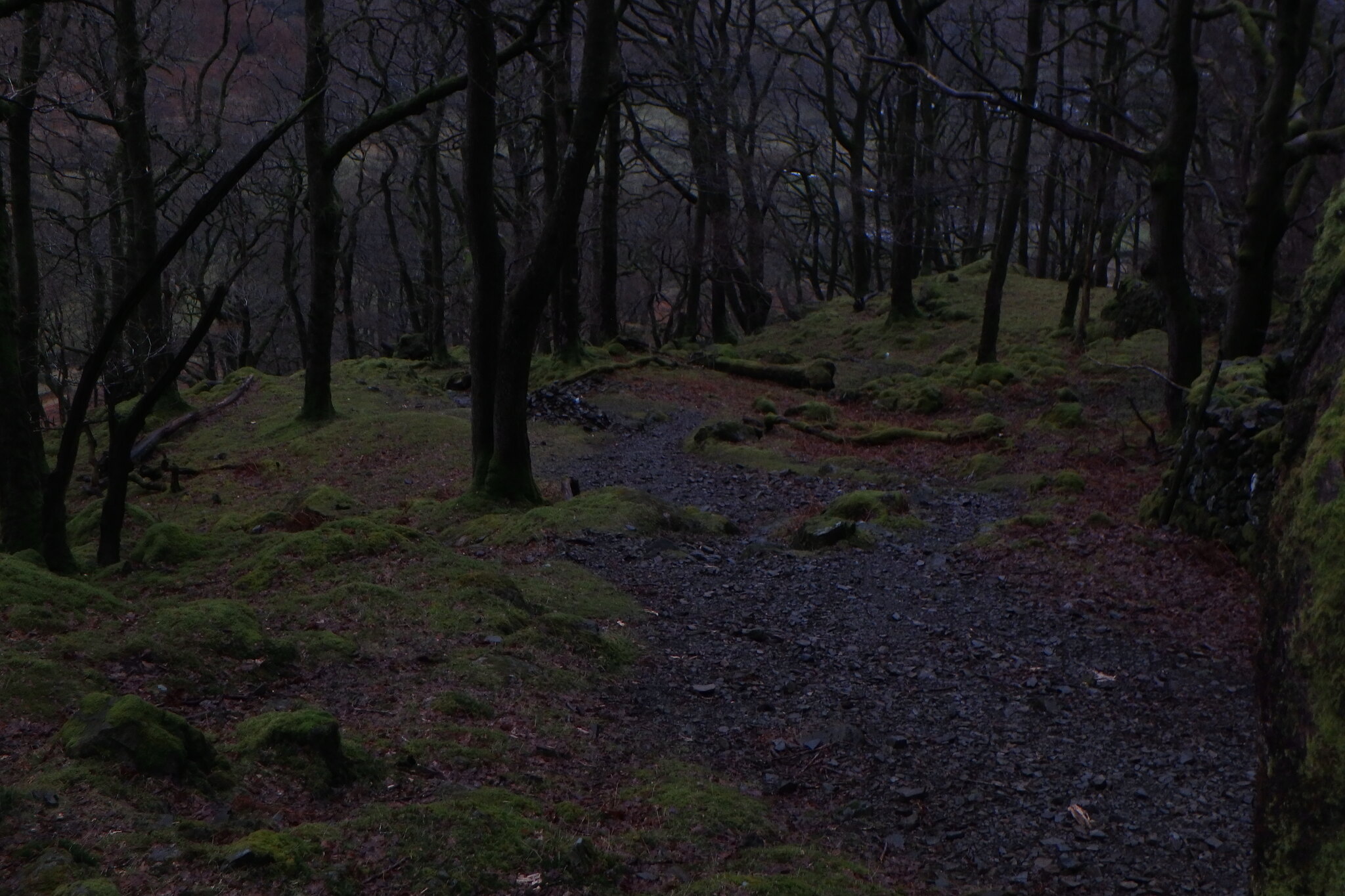 So, our first day out after nearly four months went to plan, just about. The weather wasn't the best but we enjoyed being in it, we managed three new Wainwrights and we didn't struggle too much, all in all a fine feeling of achievment.