spartleton and meikle says law1.gpx Open full screen  NB: Walkhighlands is not responsible for the accuracy of gpx files in users posts
I had a couple of days off from work and Rudolph and I had planned to take a quick trip North to bag some Munros. But then the snow came, and the weather forecast was horrible. So Rudolph got himself a train ticket to visit his parents, and I had a few days to spend with my wee sis aka Shish who lives in the Borders.
On Monday we went to Peebles to buy some shoes for me (9.5AAA can't get them in any old town!)
On Tuesday Shish was at work all day so I had a whole day to do anything I wanted. It was not such a bad day so I planned to climb the 3 Marilyns that can be reached from the circular drive from Duns up the B6355 and back via Longformacus, these three being Spartleton (what a lovely name for a lovely shapely hill), Meikle Says Law (highest point of the Lammermuirs) and Dirrington Great Law to complete the trio. In the end I missed out Dirrington Great Law but I had a lovely day and got plenty of exercise just doing the two!
I parked at the side of the road just south of the dam as described in the WH route for Spartleton. It was completely still and there were beautiful reflections in the reservoir. There were a few ducks swimming about but they flew away when I approached, making a lot of noise. Whiteadder Reservoir with ice on

I set off up the track towards Gamelshiel Castle. The track up beside the Hall Burn was full of heavy wet snow so I hopped up the edge of the track with Spartleton straight ahead. I was wondering why this rounded lump did not look anything like the steep cone on my map when I was hit by a revelation; the contour interval on my map (Explorer Lammermuirs sheet 345) was only 5 metres, as opposed to the 10 metres that I am used to and seems to be on most other maps. I checked when I got home; the Berwick map also has a 5m contour interval but most definitely have 10m. This made me feel a lot better as I didn't have as far to climb track up to Gamelshiel Castle The view the castle folks might have had from the ruins

There is very little information online that I can find about Gamelshiel castle, but it is thought to date from the 16th century. It's in a lovely position tucked away safely behind summer hill but with a lovely view across the Whiteadder Water and over to the west. Looking back to Gamelshiel Castle with the sheepfold in front

From the castle I picked up a path which took a nice gentle rising traverse across the top of two Cleughs (or cloughs in Yorkshire lingo) all the while I was assisted by some pre-trod footprints in the snow made by someone with a slightly longer stride than mine. this is where a mole has been tunnelling under the snow

Just past the top of Watch Cleugh there is a gate in the fence on the right, the fence was not marked on my map, nor is the track to the top of Spartleton. I saw the track but it disappeared under snow so I headed uphill over the heather and soon reached the top, about an hour after leaving the car. I was listening to skylarks singing and there were bursts of sunshine here and there. It was completely still on the top but too early for lunch so I headed down again. top of Spartleton looking over to the Cheviots, made a good call to come North today I think Grouse butt right on the summit

I came downhill by the track (in retrospect it was only a short bit at the bottom that had been filled with snow) and once through the gate picked up an ATV track which followed the edge of Watch Cleugh down to part of the Herring Road on the Southern bank of Whiteadder Water, and thence back to the car. 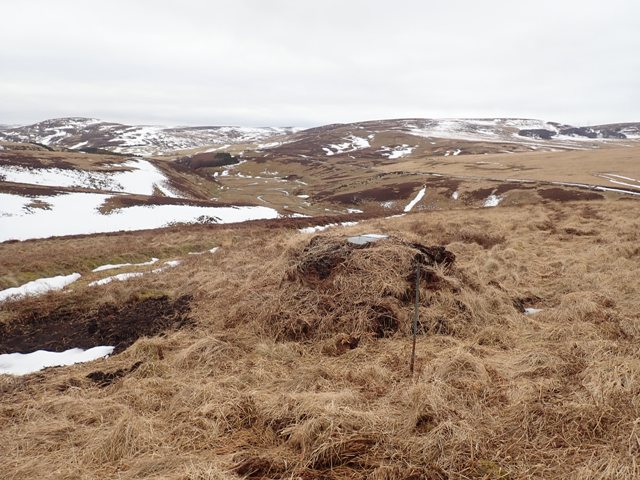 a dinner table for grouse with a feeding tray on top, and a view back down the Whiteadder valley towards the reservoir

There's an interesting article on the Herring Road here: http://www.heritagepaths.co.uk/pathdetails.php?path=1 it's a route taken by fish wifies taking herring from Dunbar to Lauder and other towns across the Lammermuirs in the 18th and 19th centuries.
Back in the car I drove north towards Gifford and then turned left down the road towards Longformacus. There was quite a lot of snow still at the side of the road on the tops here leaving a lot of it single track without passing places. I couldn't park at the usual place for Meikle Says Law because a lorry was parked there and it looked like the occupant was having his lunch. So I parked on the verge just short of the pull-off hoping I would be able to get Rudolph's big heavy car off when I came back! There's a rather disappointing descent at the start of the walk (considering you come back the same way) but since realising the contour interval on the map was only 5 metres not ten it had suddenly got only half as bad!
The track down to Faseny Cottage gives a good view of Meikle Says Law, and a choice of three possible routes to get up there. I decided to follow the track up beside Faseny Water as it looked like it went nice and gently up all the way.
When I got to the ford, however, it looked like a wet feet job. There was a lot of water in all the burns due to melting snow. So I followed the right bank of the river until I found a place I could step across. It looked about 2 or 3 feet deep at that point so I had to be certain that it was narrow enough! I'm not going to ford this stream here thank you! Happy mug (just the one today)

The track was lovely, evenly graded and slightly soft underfoot, but not long after rounding the first bend at about 380m it was filled with deep, heavy soft snow and really quite tough going so I decided to head uphill via Sheil Rig moving from one area of short heather to the next. The moor round here is heavily managed for grouse and there were grouse butts everywhere. I saw and heard a lot of grouse and also saw loads of hares, mostly in winter white but some of them starting to look a bit brownish. hare tracks in the snow This animal dropping looked like a golden egg to me!

This is not a steep hill but it is one with a multiple of false summits, but eventually I reached the top and found that the track I had started on had gone all the way to the top of the hill. On the other hand, the one I had hoped to find on Sheil Rig did not seem to exist. Oh well. one of several attempts at a summit pic with the self timer!

I decided to walk over to Little Says Law and then descend via the track which crosses Little Collar Law, mainly because this one has a bridge at the bottom. So I set off across the top. By this time the clag had come in a bit and it felt very isolated and lonely. It was hard going across the top, the gradient downhill was so gentle as not to be helpful at all, and there was a lot of very heavy, wet snow with wet holes unpredictably underneath. However there is a good fence to follow all the way to Little Says Law making navigation simple (especially as I had forgotten my compass and the one on my camera seemed not to be accurate). 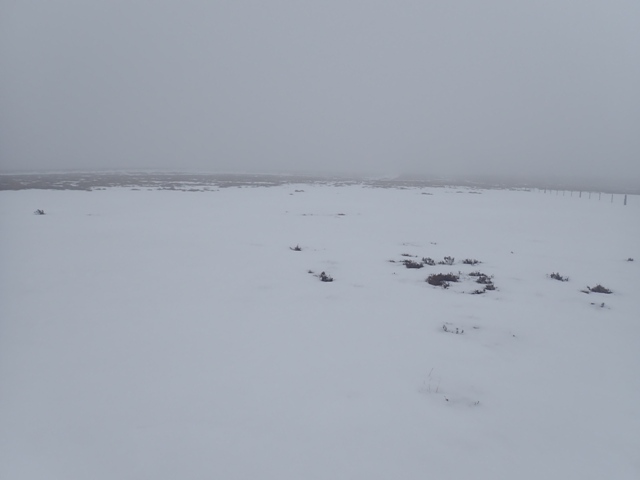 quite a lot of snow on the top 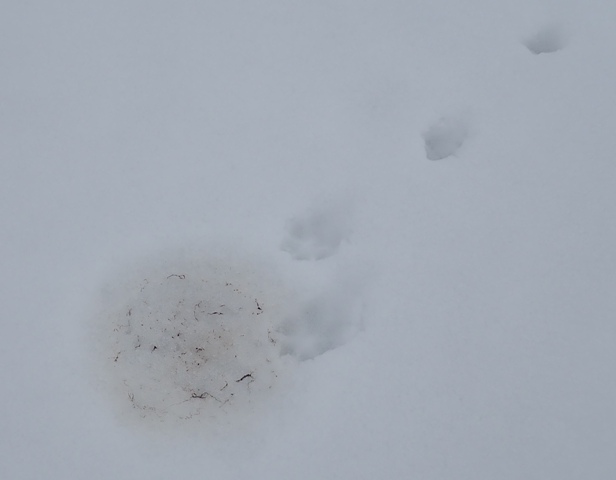 A hare has been sitting here

It felt quite spooky especially when some completely stationary wind turbines appeared looming out of the mist. oh look it's clearing up!

However the track I was aiming for became apparent at about 450 metres and after this there was just a wee bit of snow to negotiate and I was soon back at the bridge. back on the track. I stopped at Faseny Cottage for a brew before the climb back up to the car.
By the time I got back to the car I didn't feel like another hill - and I got back to Shish's house just before she got in from work.

That happy mug is getting some miles in ...

Tentatively have these two on my radar for this Saturday

PeteR wrote:Tentatively have these two on my radar for this Saturday

How was it? Lovely weather for it!

Alteknacker wrote:That happy mug is getting some miles in ...

Oh the happy mug insists on coming everywhere!
I think the turbines are better than Fracking. No doubt some will disagree with me but they do have a certain elegance, and this is already a highly managed landscape.