g24.gpx Open full screen  NB: Walkhighlands is not responsible for the accuracy of gpx files in users posts
Spring is here!

But I’m in Scotland for winter snow and ice!

Ah well, mustn’t complain, better than clag and high wind I suppose. After the longish trip yesterday and the tendon trouble I had a rest in the morning and decided on Beinn Tulaichean as a shorter afternoon climb to see how the tendon would cope. This mountain is usually climbed on a trip with the splendid Cruach Ardrain, however I’d done a snow climb on the Cruach a few weeks ago so was content with just the Beinn today. No ice axe or crampons were taken for the first time in 10 days!

and I stopped as usual to admire the sight of the superb Tarmachan ridge – Killin really is worth a visit and this mountain view is a tremendous backdrop. I drove to the starting point at Inverlochlarig, there is a ‘single track road with passing places’ alongside Loch Voil that is grand but I wouldn’t want to drive this in summer since the road is very single track and the passing places are few, it must be bedlam. Driving down the glen the sight of the Corbett Stob a’Choin looks interesting with a good looking spiked ridge. I started out from the car park at 2pm, stopping to pay my respects at the memorial by the stile at the start of the path that leads to Stob Binnein, a reminder for us all although I don’t know any detail about this accident. 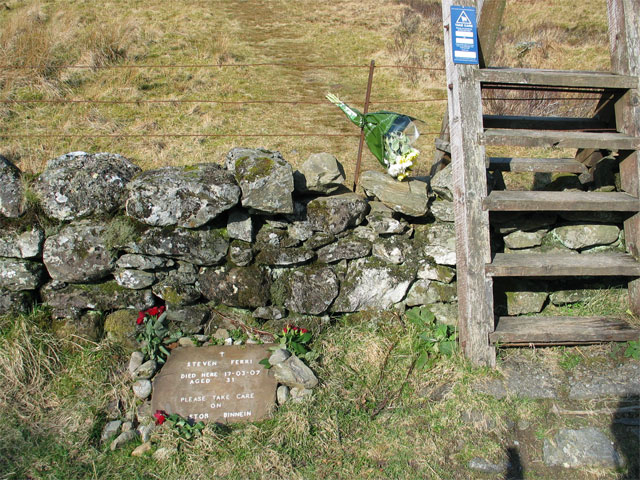 I was soon on the track to the north and spying out the route of ascent, I chose the ‘mixed terrain’ route rather than the continuous slope. Views of Cruach Ardrain opened up; I got a good sight of the slope of the east face that I’d climbed a few weeks ago. This is a better class of hill in terms of the nature of the ground since whilst it was very wet in places there were no awful tussocks or peat hags to delay progress. Take a good look at the mountain before you start though so you know what to expect since as you ascend, Beinn Tulaichean hides her rocky summit area behind her skirts of a couple of flat shoulders higher up so beware the false top! The climb was enjoyable over a mix of easy and steeper grass slopes, up gullies and across rocky areas. Good for route-finding, just do your own thing although not so easy if it were misty. Soon after the ascent begins the summit of Stob Binnein can be seen, a proper summit mound. To me, the walk along the ridge from Inverlochlarig looks like a more enjoyable proposition for Stob Binnein and Ben More than the slog from the north, although longer of course. For a non-summit walk the 12km journey over the pass from Inverlochlarig to Benmore and on to Crianlarich looks good although would take some planning if only a one way trip – it is 42 km by car! tree in rock & nice ridge to Stob Binnein from Inverlochlarig Although stripped off I was extremely hot as I climbed, plenty of drink required. I reached the final shoulder, which is a bit boggy, then pushed on for the south end of the ridge past a large steep snow bank that would have given some fun if I’d have had the axe with me. climb to the top from the last shoulder

As I’d climbed over the latter stages cloud had started to roll in and there was a dirty haze about, disappointing then that there were no good views at the top. I bombed along the ridge to the summit and had a stop for fuel, coat on immediately because I was now in the bit of wind there was and it was cold after the roasting on the way up. I didn’t stay for long, I fairly zoomed down and with a bit of assistance from the walking poles on the steeper and wetter ground reached the car in just over an hour. As I drove back down the glen the cloud was clearing and the sunset was a good end to the outing. looking back along Loch Voil

The tendon had been a bit sore, not too bad but this was only a short outing compared to what I had planned for the coming days. So I decided on a rest day tomorrow, I stopped at the Killin Co-op on the way back and bought a pack of frozen peas to use as a diy ice pack and some ibuprofen to complete the treatment. Hope it works!

Another week to go before I'm hundreds of miles back to the flatlands, making the most of it and there might even be snow next week that would round off the visit just fine, here's hoping