I have to confess that I didn't half make a meal of these two Mealls, which must be two of the easiest Grahams in the book

... For this WR, I've combined an unsuccessful first attempt on 7th January this year (nary a Graham bagged due to Snow Issues

, but at least a few nice photos) with a more fruitful second attempt on 30th March, when further heavy snowfall robbed me of any real views at all, but at least I did get the two Grahams bagged. Distance and ascent are for the two trips combined, but the time is for the second outing only. (The "book time" from the SMC Grahams book is 3 hours 45 mins, but in my defence it was rotten weather with quite a bit of snow lying

!)
For both attempts, I took the standard route from Amulree, parking at the big village hall car park and walking back south for a short distance on the A822 to the start of the Girron farm track.

our_route.gpx Open full screen  NB: Walkhighlands is not responsible for the accuracy of gpx files in users posts
On my initial January attempt, recent heavy snowfall made it difficult even to wade out of the Ice Station Amulree car park on to the main road! This was the start of the Girron farm track, with a sign for "Path to Harrietfield": 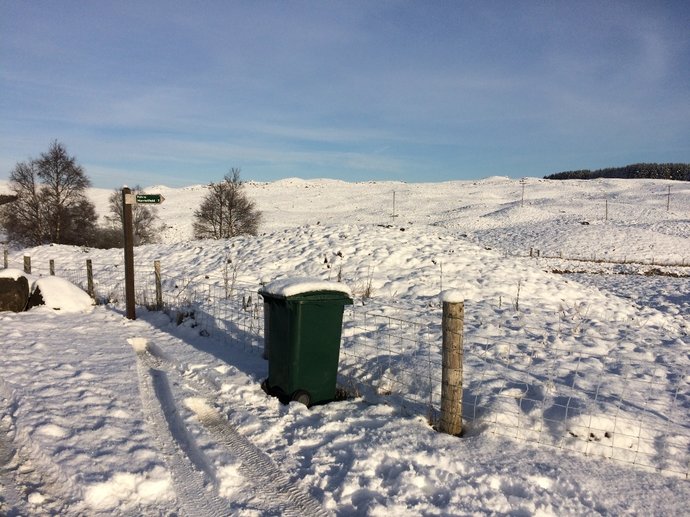 The onward route over the Girron Burn bridge to the farm and a wee patch of forestry immediately to its north, with the end of Meall nan Caorach's north ridge visible to the left: Finding the start of the track leading SE up the glen proved more challenging than I'd expected, however. Just after the farm, I took the wrong option where the track divides at a big shed, turning left rather than right, and ending up at a dead end at a radio mast at the northern corner of that bit of forestry just north of the farm. Rather than turn back at this point, I decided (probably rather unwisely) to attempt a circular route over Meall nan Caorach only, via its northern top of Creag Ghorm. This was the planned ascent route: 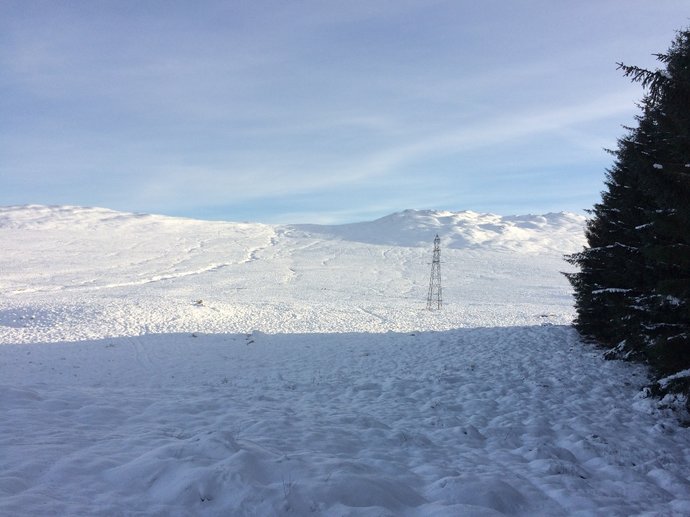 Needless to say, it was a deep wade through shedloads of fresh soft snow, often knee-deep, and it took me hours to make any headway. By the time I finally reached Creag Ghorm's summit environs, it was obvious to me that I was timed out on the two Grahams and that I would have to head straight back down the way I'd come up, if I didn't want to end up benighted on a rather parky January evening... Ah well, at least I got some views.
Looking back down towards the farm: according to the SMC Grahams book, the pleasingly pointy summit visible in the distance is the Corbett, Farragon Hill. 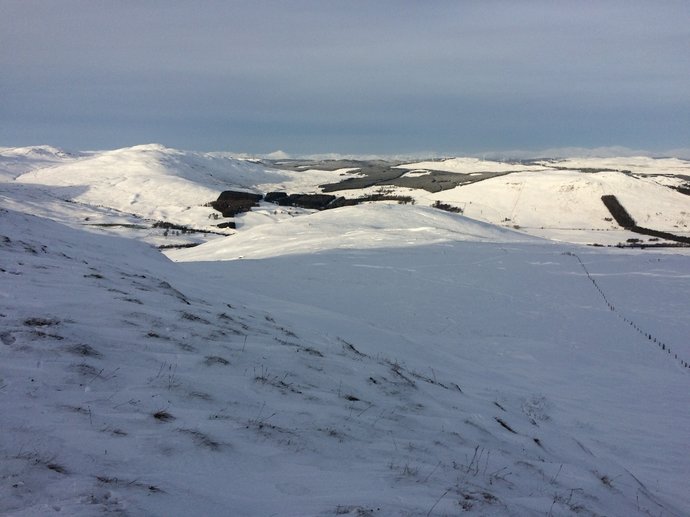 A nice view from Creag Ghorm summit, with the pleasingly named Loch Freuchie visible in the distance: 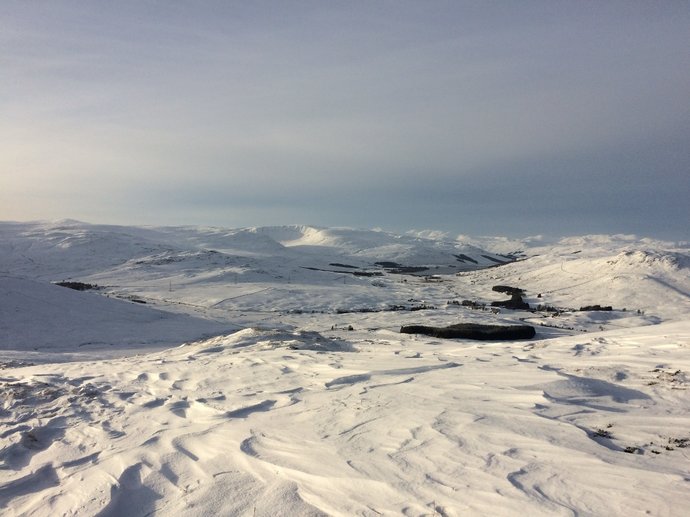 And another fine view, with Farragon Hill visible again: The cairned summit of Meall nan Caorach was clearly visible to the south, with Meall Reamhar also visible across on the other side of the glen. Neither of them really looked that far away, but it had taken hours for me to get this far, and I really didn't have that much useable daylight left, so I did the sensible thing and headed back down 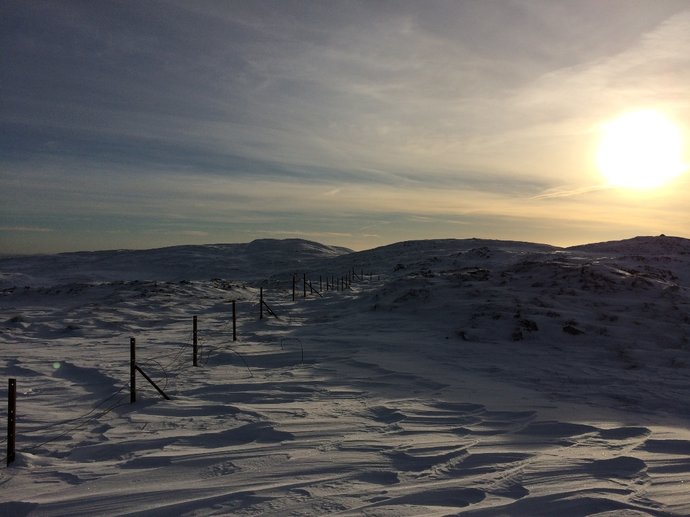 Lovely rounded tussocks (if I may be so bold) on the way back down: difficult terrain to walk, but nice to look at! 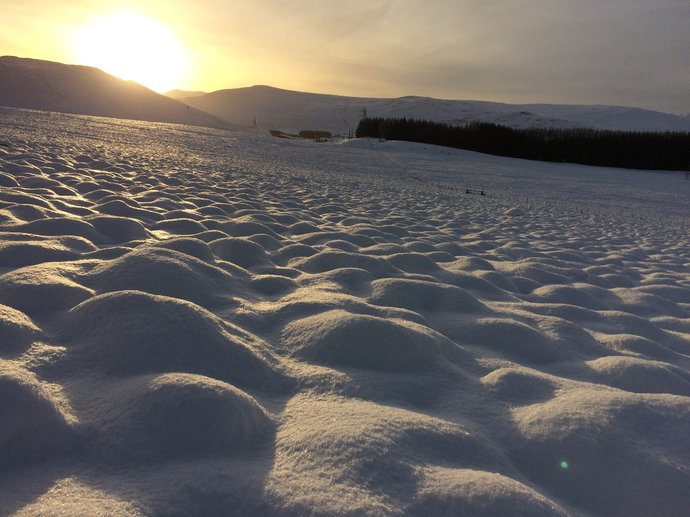 Fast-forward now to Good Friday, 30th March 2018. After the inevitable weekend-on-call nonsense and then a nasty cold, this was my one free day to try to get a walk in during March, and needless to say the forecast was fairly pants: that Beast from the East hadn't completely retreated just yet, and there was more snow forecast. All the same, having bagged nothing more than two Sub2K Marilyns so far for 2018, I was keen to get out and have a go at something, and I thought I might have a second "grudge match" against these two wee Amulree Grahams.
An initial view of the two target hills from the A822: still a fair bit of snow up there, by the looks of it! 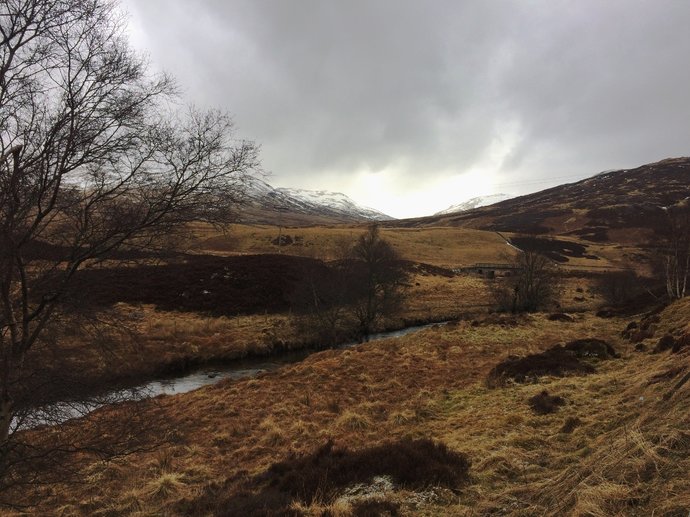 A slightly zoomed shot of the same: Yet again, I had some finding-the-right-track issues at the farmyard

... I ended up heading off up a faint path just east of the farm buildings, and then had to cut up left to join the track that I'd missed. Ho hum. At least there was another pleasing view of the two Grahams at the head of the glen to the southeast. However, as these brooding clouds tend to suggest, this was the last view I got of them all day: about 15 minutes later, the Clag descended with a vengeance, and it started to snow right enough, quite heavily at times. 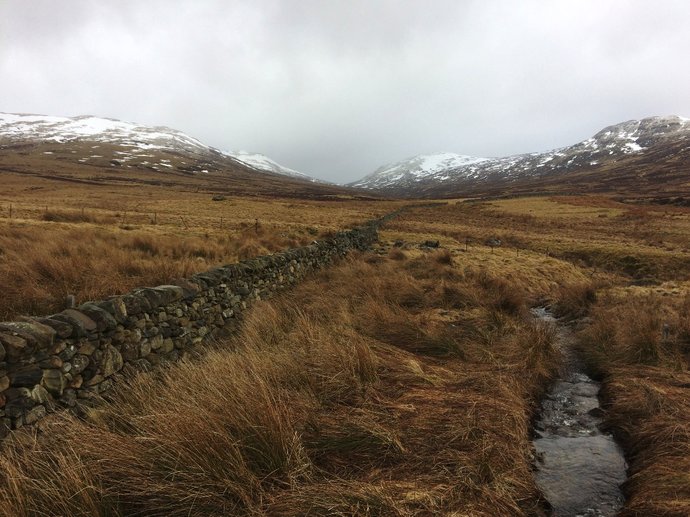 March may have come in like a Beast from the East this year, but as it finally heads out, it would have to be said that it isn't particularly showing any lamb-like tendencies...All together now, "I'm Dreaming of a White Easter 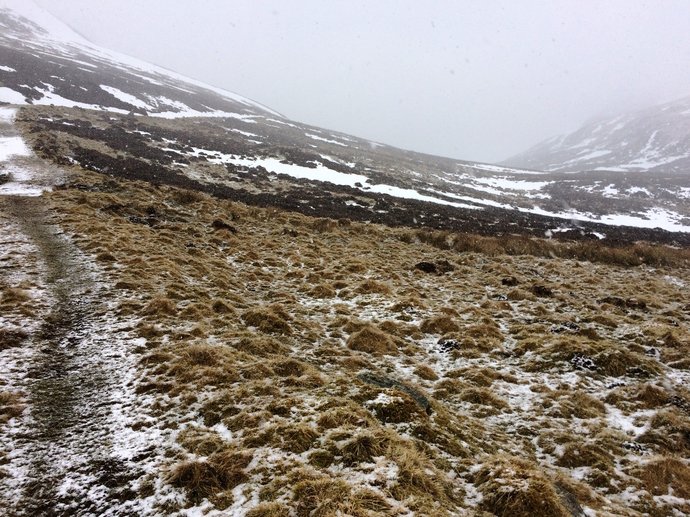 Ah well, at least the track made for an easy approach to the high bealach between the two Grahams. As I approached the high point of the track, the ongoing route to both Grahams looked steep but feasible, despite the snow. This was Meall nan Caorach to the left: 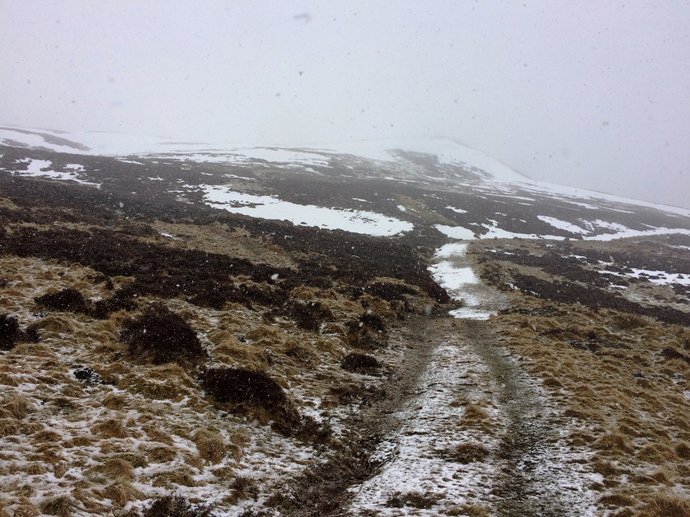 And a hazy view of Meall Reamhar to the right: 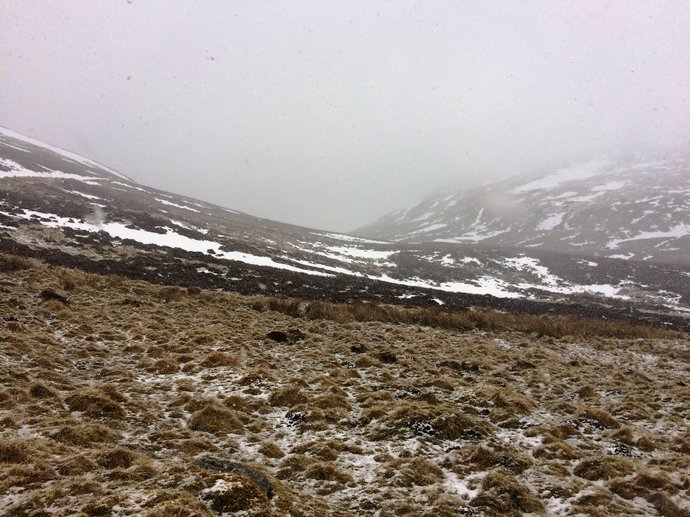 I went for Meall Reamhar first. It was a bit of a slog up steep pathless heather, with a dusting of snow all over it and deeper patches from time to time. Higher up, however, I found a line of fencing that led the way onwards to the top. Given the practically zero visibility, the cairn came as something of a surprise when it finally arrived: I thought I still had some distance to do, but this cairn looked like the Real Deal, and my GPS agreed. 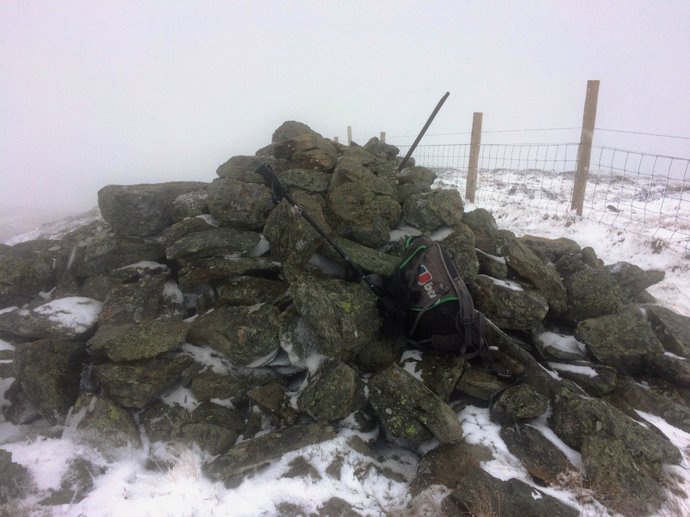 Yours truly, looking slightly pained at the top: I headed straight down along the edge of the fencing, which led all the way down to the track at the bealach, and onwards up the other side of the glen to Meall nan Caorach. Again it was a bit of a wade through steep heather and snow, but it was feasible with care. Once again, the second Graham's summit trig point came as a bit of a shock as it finally loomed up ahead through the snow: 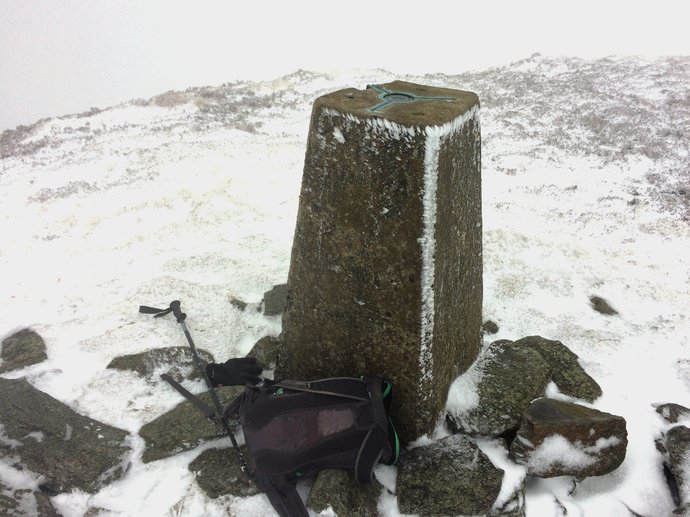 Me lapping up the Easter sunshine at Meall nan Caorach summit: 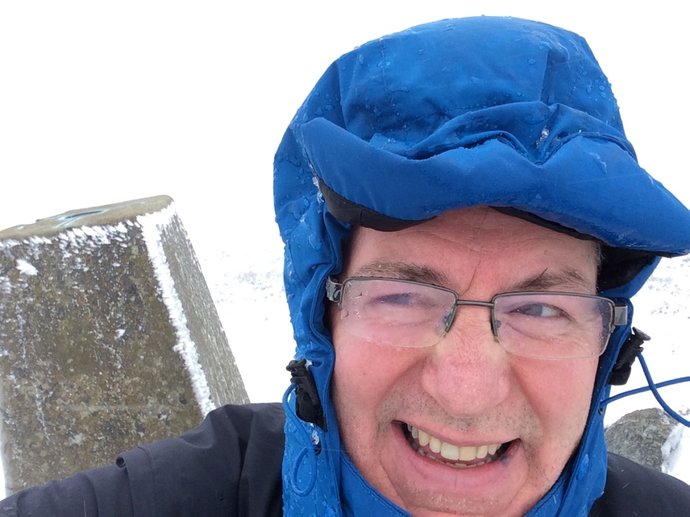 I headed straight down again to the bealach along the line of the fencing, and then just trudged back down the track to Girron Farm. There was a big snowdrift across the track just downhill from the bealach: 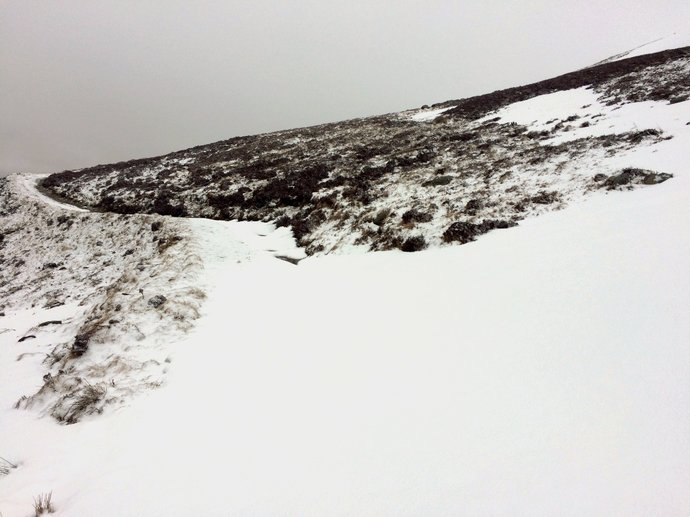 Something of a relief to get these two bagged at last