Although the weather was still poor for day three of our Easter trip we didn't have far to go from our bunkhouse in Newtonmore to the start point - and we hoped we could get round and back to see some of the Shinty game that afternoon.
We followed the route from the parking area in Glen Banchor above Shepherd's Bridge, initially heading northwards up the line of the Allt a' Chaorainn. At the end of the trach we headed down towards the water and about twenty metres further back down hill, and hidden by the tress we found the footbridge over the Allt.
Once we had crossed we started the slow slog up grassy slopes, with plenty of snow on the ground, eventually reaching the exposed high ground for the final climb to the summit. 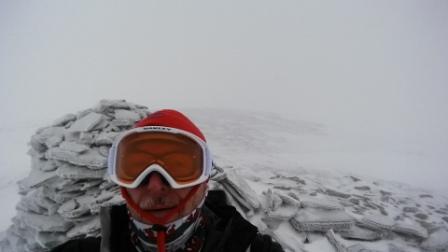 It wasn't pleasant on top, so we got our bearing sorted and headed for munro number two.
With the visibility so poor it made the descent towards the Allt Cuil na Caillach a bit of a tester and it wasn't really possible to see how steep the ground was in front of you. It was reassuring then to hit the bottom and start the slow climb up towards Carn Sgulain. 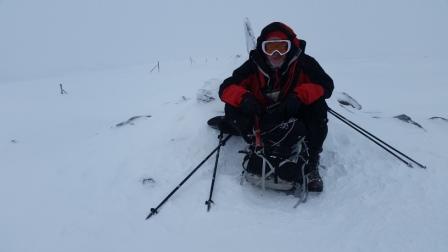 The weather was still not too good, so we only stopped for a quick photo before heading west following the fence posts.
After about 30 minutes a group of fell runners passed us - big respect!
The weather actually improved slightly and the snow was pretty firm, so we were able to take a straighter line between the fence posts.
At one point we dug a small snow hole in the lee of a rock and sat down for lunch. It was a stiff, but short climb to the third munro of the day, with impressive cornices above the corries. For our route back we backtracked towards Carn Ban then dropped east into the valley before a gradual descent SE then winding westwards around the base of Meall na Ceardaich then picking up a better path back down towards Glen Banchor, with enough time to get to see the second half of the Shinty game.