Glorious Galmadale in a Gale

Glorious Galmadale in a Gale


Easter Sunday was busy in Glencoe, but I was on the quiet hills of Meall Ligiche and Meall Mor so avoided most of the crowds. An uneventful drive and ferry hop took me to Ardgour and I drove the 6 or so miles down the coast to a flat camp spot on the shore of Loch Linnhe. A family of black wild goats clattered across the cliffs behind the road and the odd seabird broke the almost still water surface.

Overnight the wind rose to flap the flysheet and I knew an early start would be a good plan due to the impending snow forecast. 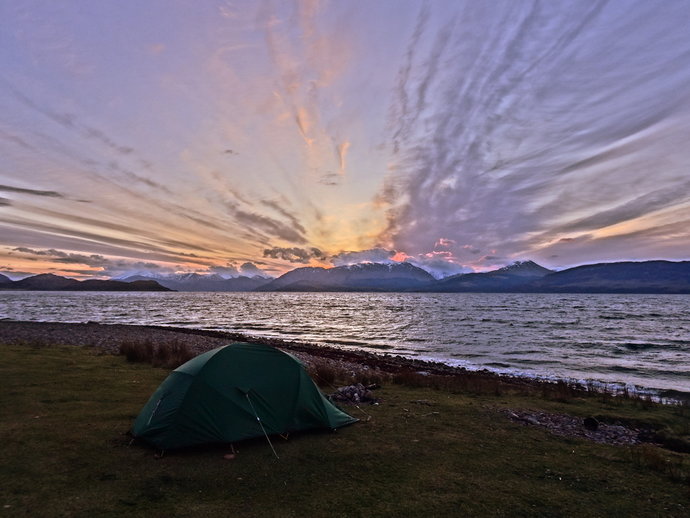 After packing up, I drove the last mile or so round to the large parking area near the two houses in Glengalmadale. I was walking by 8am with the easterly wind making its presence known. I headed west along the road passing the wee forestry plantation expecting to see an obvious route onto the hill at its edge, but there was just gigantic gorse blocking the way. After another 100ms or so the gorse relented and I could get off the tarmac and start my ascent of Beinn na Cille. 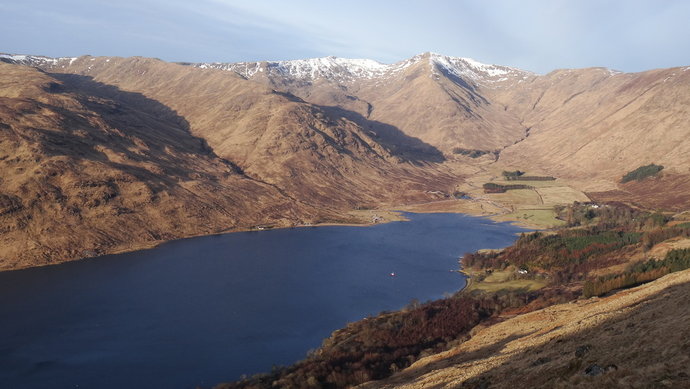 The climb was fairly straightforward, with lots of grass and dead bracken, but I could tell it might be different in late August. As expected, the higher I went, the stronger the wind blew until I reached the summit cairn by 9am and decided it was time for some more layers. I sheltered behind the cairn and put on salopettes, waterproof, balaclava, winter gloves - the full Burton. No messing about. 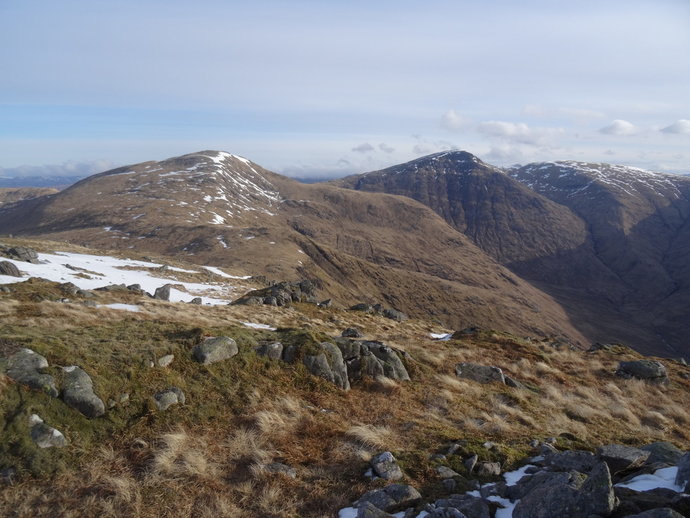 In some patches of snow I could see evidence of footprints heading for Fuar Bheinn so managed to fight my way down to the Bealach Coire Mhic Gugain which was almost 200m of height lost! Thankfully it was early in the day and I still had plenty of energy to reclimb to my next summit of Fuar Bheinn 300m above. Again, I hid in the lee of the summit cairn and grabbed some food. 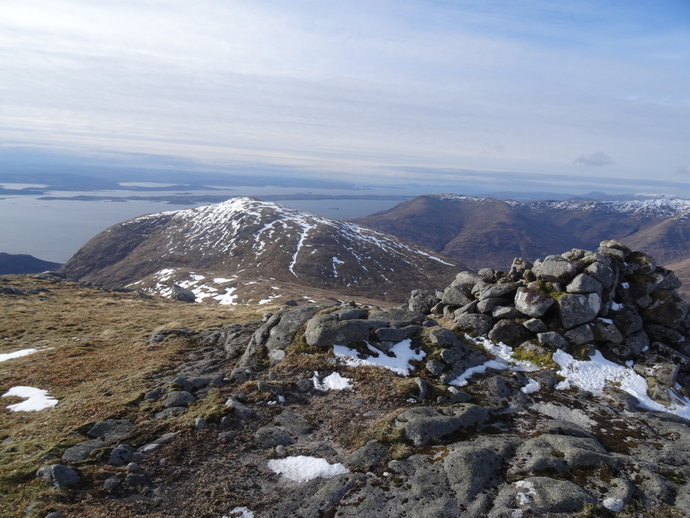 View from Fuar Bheinn back to Beinn na Cille

The bealach Cul Mhaim between Fuar Bheinn and the next hill Creach Bheinn is a wide open undefined featureless area and I was definitely glad to be there in good visibility. The sun was shining periodically as the easterly gale blew the cloud past a long way above summits. I found the old footprints again and linked various patches of hard snow up to the summit of Creach Bheinn by 10:30. There's a low wall surrounding the now destroyed triangulation pillar so once again I took the opportunity to hide in the lee and stuff some more food down my throat. 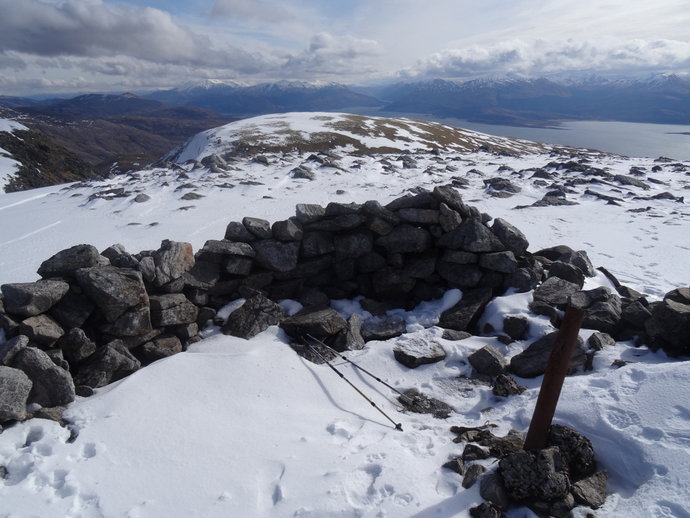 At this point there were a whole load of unfamiliar footprints, some with crampons evident. I guessed the crampons had ascended from the northern Glen Tarbet side, and so it proved as I continued on the horseshoe route past the weird Colby Camp. 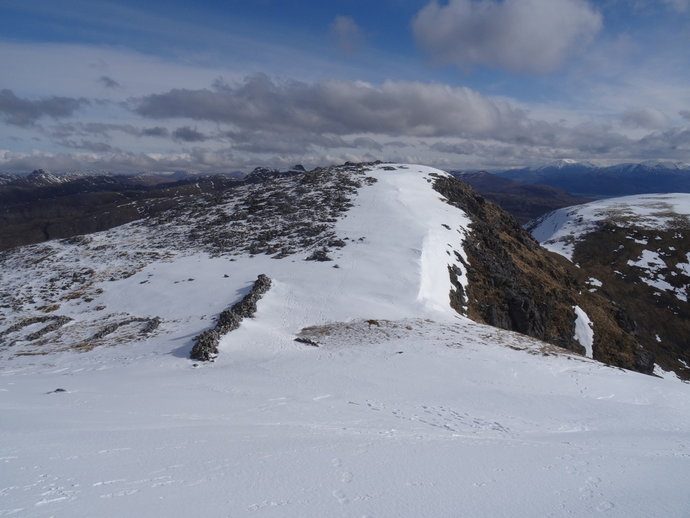 I followed the crampons down the steeper eastern ridge to the Bealach Coire an Dubh-Altan where some massive cornices overhung the northern cliffs. 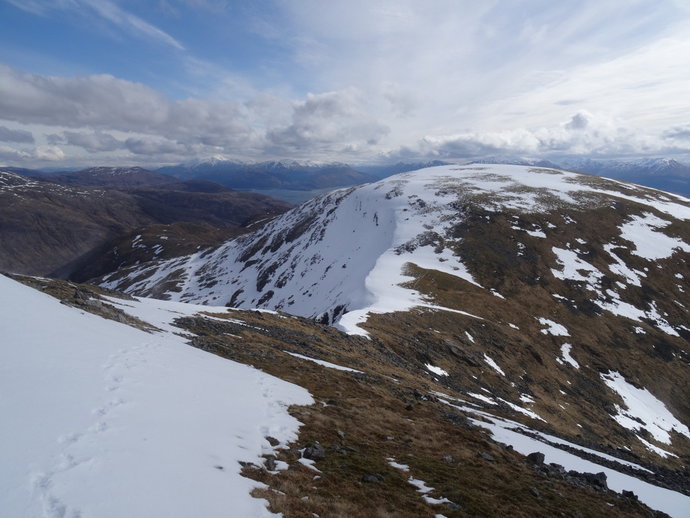 Onto Maol Odhar, I battled into the teeth of the easterly, it was tough going. At one point through the hole of my balaclava I spotted something on the ground to my right that wasn't a rock. I diverted across to it to discover it was some sort of aircraft wreckage and at the summit cairn there was some more that had been deposited by others. I've since found out this is the remnants of a USAF Voodoo fighter-bomber that crashed in 1964. Lots of info online

Continuing east, with cornice handrail on my left, I was startled to see the wind blowing snow up the face of the cliffs in a spectacular way. If it wasn't so freaking cold I could have stood watching for minutes.... 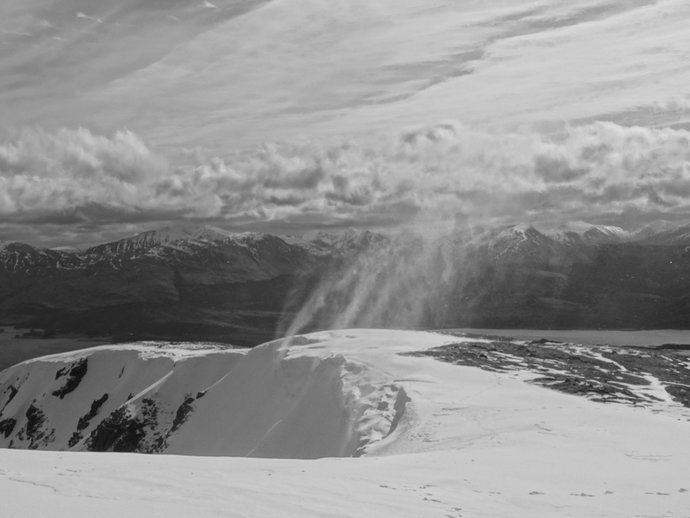 Now I could start my long descent and headed in a curve first SSE, then S, then SSW across joyful springy grass down to the wide col of the Diollaid na Maoil Uidhre. Unfortunately this was where the wind reached its worst and I could feel the breath being sucked from my mouth as it whipped past my face. At one point I could feel my contact lenses lifting and had to face away from the main force in order to keep them in. I pulled out my pocket anemometer and raised it to the wind....it read 50mph+ consistently, the temperature read 2.3° C...probably quite cold.

As others have said, following this long ridge back to sea-level is the absolute highlight of a wonderful walk. Despite the wind, I was enjoying myself and the easy angled descent weaving between various grassy knolls and rock outcrops was great. The views of course were incredible, photos can't do it justice so you'll have to take my word for it. I think if I was nackered, or the visibility was dire, I would have dropped down to the head of the glen down the SW shoulder of Maol Odhar but not today. 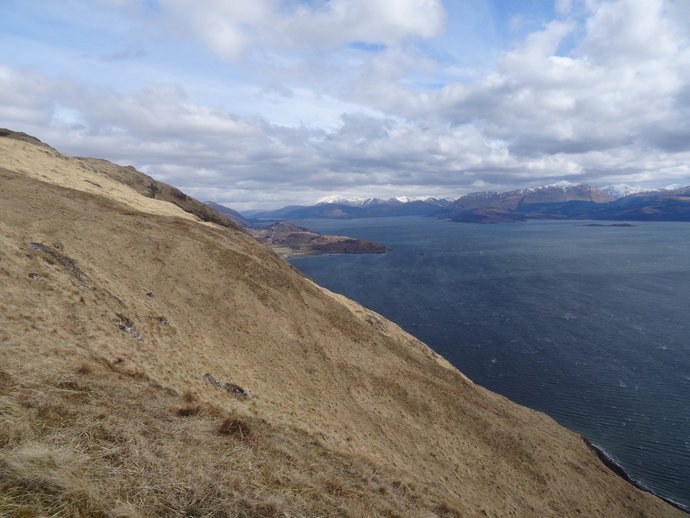 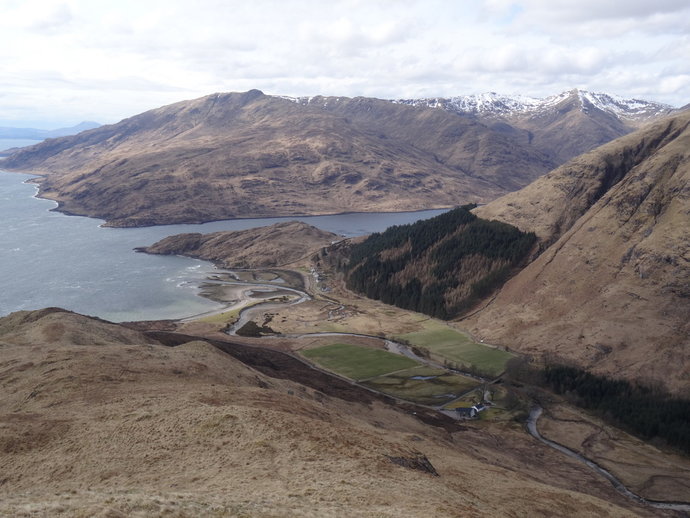 South from the ridge, I can see my car from here

I decided to follow the crest of the ridge until its true end at the tarmac beside the sea and then plodded back to the car by 13:20. That was a grand route, full of interest and not a soul on it.

This a superb circuit and you have some nice photos there

Really love the hills in this area. Did you see the wild goats en route? I seem to recall there was quite a large flock/herd when I did the route

Thanks! Yes it is a great route, really enjoyable with variations in terrain. The goats came to investigate my campsite the night before, a family of black shaggy ones dotting about the cliffs.

Now, that is very nice!

Users browsing this forum: garypaterson, markab278, moragsmart1, past my sell by date and 64 guests