The view from Sgurr an Fhidhleir

The view from Sgurr an Fhidhleir

Grahams included on this walk: Sgurr an Fhidhleir


Sgurr an Fhidhleir
The Fiddler


In the hills of Coigach. The summit of Sgurr an Fhidleir looks out over the majestic peaks of Inverpolly and Assynt.


After being notified that there may be a chance of the Aurora Borealis making an appearence that night. The thought of going up Sgurr an Fhidhleir started playing in my mind. I checked the weather forecast to find that clear skies had been reported for the rest of the day and night.

I wanted to get up to view the Northern lights from the summit before the summer months come, so it was looking good.

Leaving from Ullapool at 1400 hrs, I made my way by car towards Achiltibuie and onward to the small Culnacraig car park, arriving at 1450 hrs, where I would start the walk. 
Once I had the camera gear packed up, I would leave the car and start to ascend at 1500 hrs. I would follow a rough path up, keeping in between Beinn nan Caorach and Ben Mor Coigach. There were some clouds about, but after seeing the forecast earlier on I was hoping by the time I got up there they would clear away. The first half of the ascend is quite steep. I think I may have stopped 3 times going up, each for a couple of minutes, just to take in the views... Or so I told myself while panting away. Looking up to the The peak of Ben Mor Coigach Looking back toward the Summer Isles Following the track to Sgurr an Fhidhleir

After an easy middle part of the walk, it starts to steepen up again for the final push, and where I lost the path, or maybe it fades away near the top anyway. The cloud was rolling in, with the wind picking up the further I get. Near the peak of Sgurr an Fhidhleir Torridonian sandstone near the peak of Sgurr an Fhidhleir

Reaching the summit of Sgurr an Fhidhleir - 1625 hrs


It's not until the top that the breathtaking landscape of Inverpolly and Assynt comes into view. 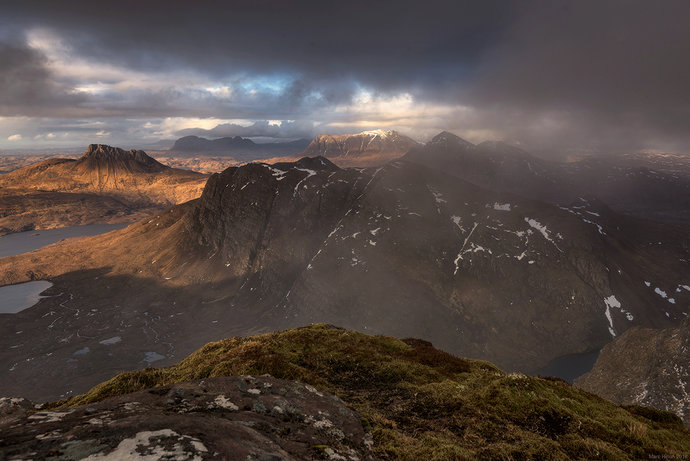 Looking out over Coigach, Inverpolly & Assynt

The weather wasn't improving at all. The wind was a lot stronger at the top, as you would expect, but along with it came the occasional horizontal snow shower. After being up there for around 30 minutes some thick cloud rolled in, and the views were no longer visable. Just off the summit of Sgurr an Fhidleir

The clouds came and went every 5 minutes for about half an hour. When it cleared, the views were stunning as the sunlight brushed across the landscape through the breaks in the clouds. Although the strong wind stayed, and with the clouds still there, seeing the Aurora after the sun had set wasn't looking hopeful. Even if it had, I'm not sure the tripod would have been up to much against that wind. Nikon was out for this one About 1730 hrs, it wasn't any better. Being up there in tracksuit bottoms, not being dressed for the occasion I decided to call it a day. 50 minutes later at 1820 hrs I was getting back into my car, and ready to drive back to Ullapool.

Re: The view from Sgurr an Fhidhleir

Re: The view from Sgurr an Fhidhleir

Some wonderful images there, with the soft, wrinkled pink curves of the Torridonian sandstone in the foreground, and the remarkable towers of Stac Polaidh beyond.

We spent 3 days last week looking up at both the Nose of S a F and SP from the a wild camp on the sandy south shore of Lurgainn. Its simply the best place in the world.