Day two of our week in the Lakes. Thomas was busy revising and Robert decided to keep him company so it was just me, Lorraine and the dogs walking today. Plan was to ascend Red Pike (the Wasdale one) then see how much time and energy was left for ridges to adjoining fells. 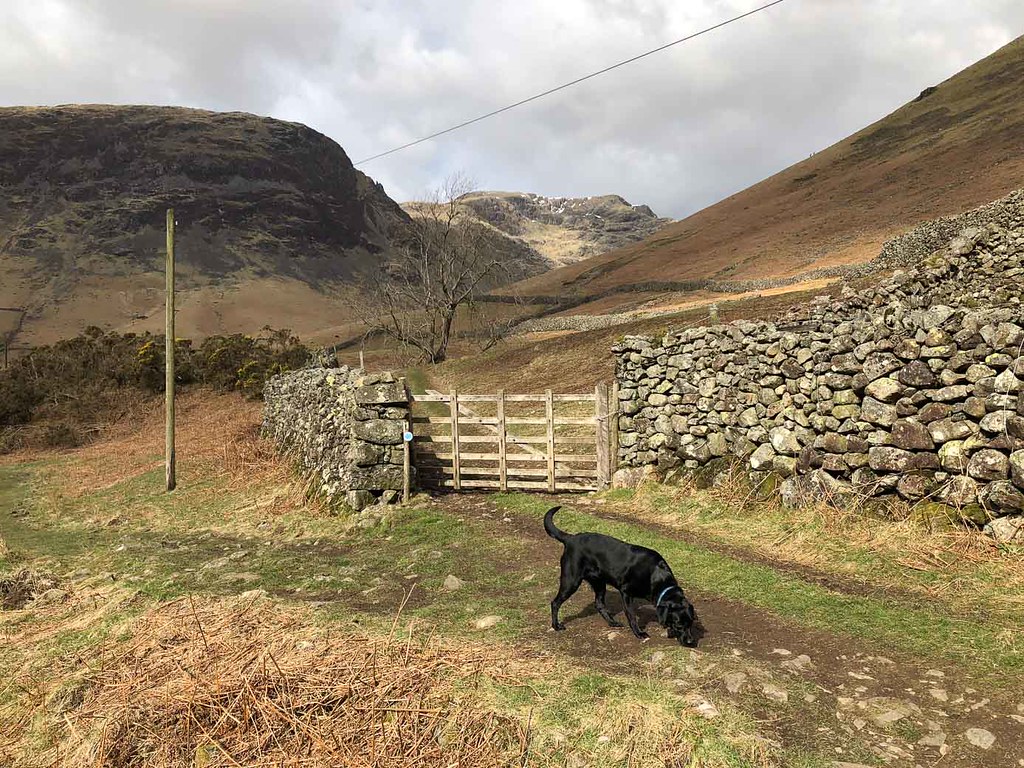 The target was in sight right from the moment we left the cottage. 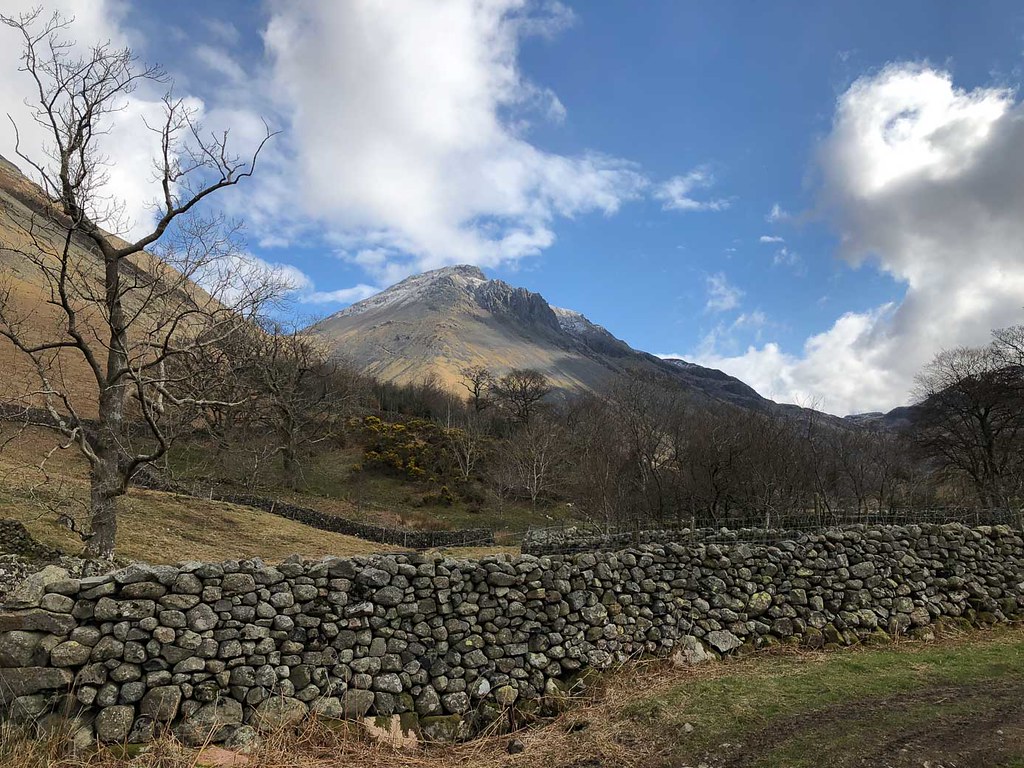 The weather was brighter than the day before - could see the top of Great Gable for the first time. Most of the snow we had been walking in yesterday had now gone. 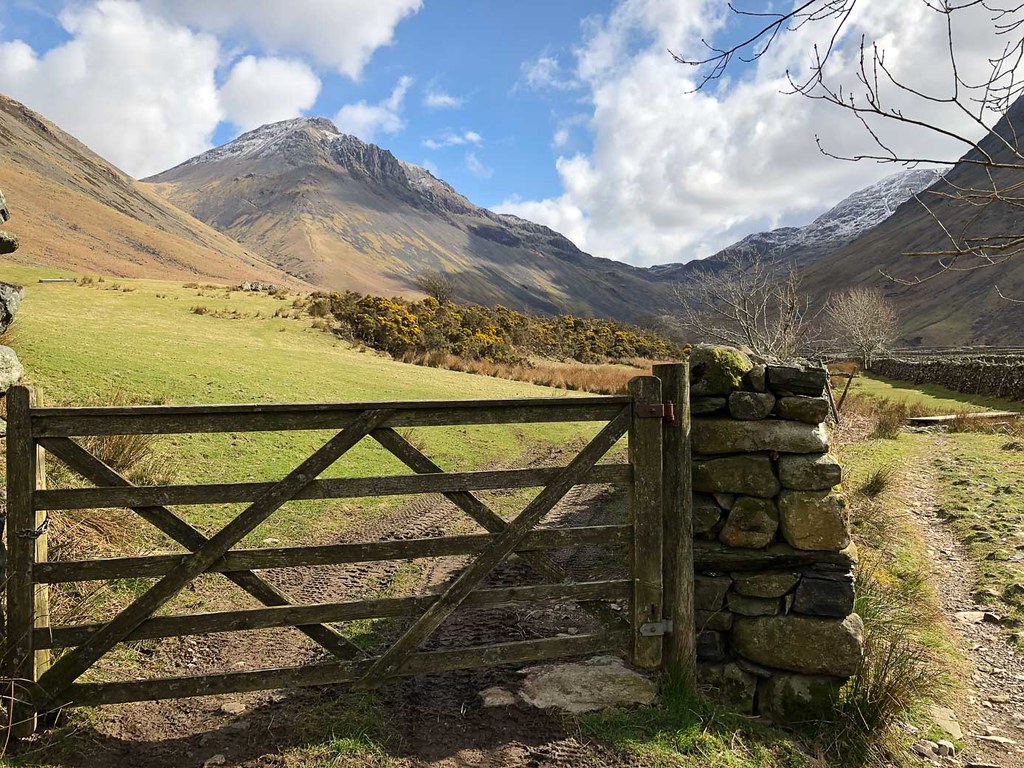 Nice views lookup up the valley as we headed towards the bridge near the inn. 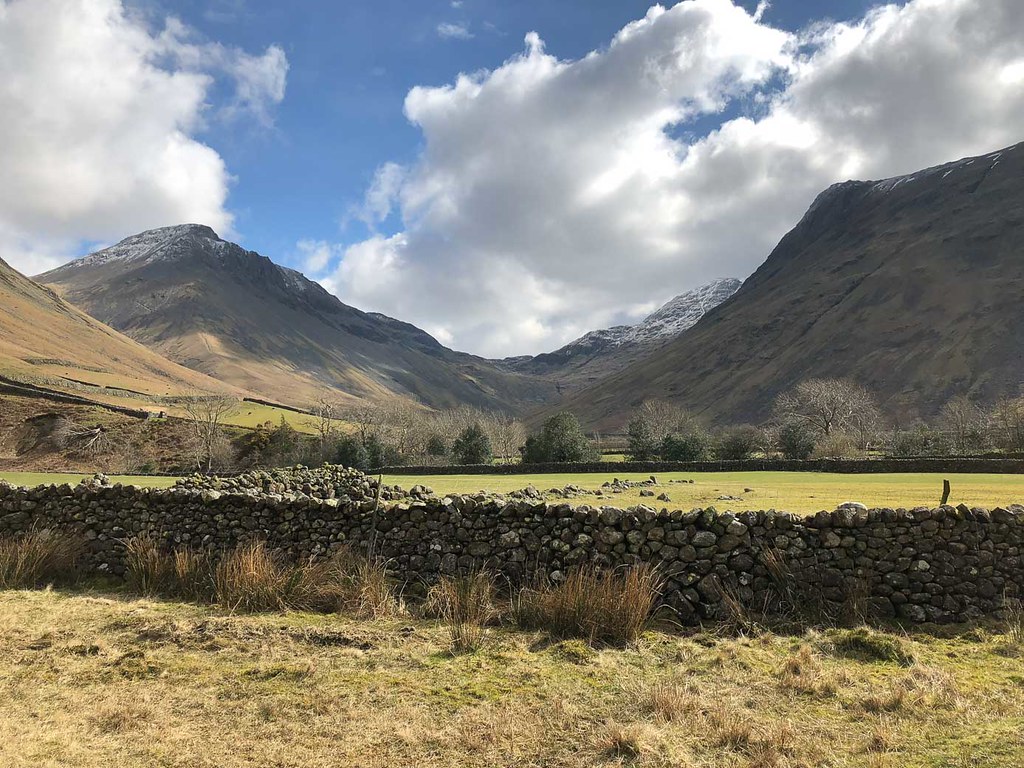 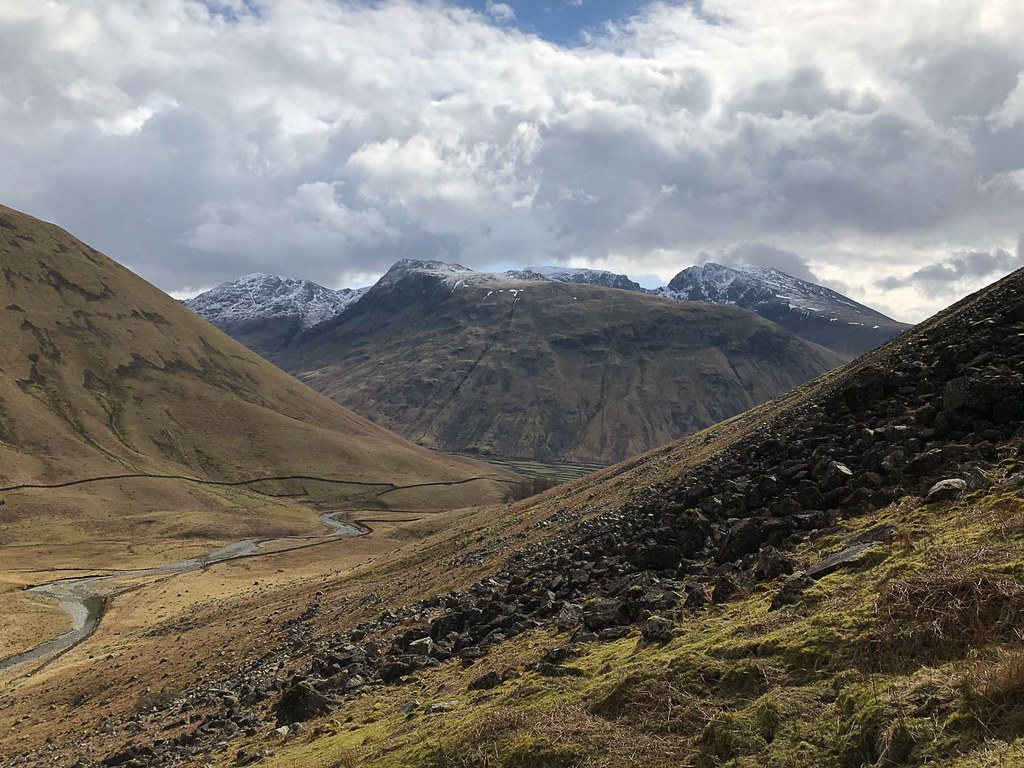 The path up to Dore Head looked better on paper than it turned out to be - I knew it would be steep but at least it was on grass rather than scree, with zig-zags to ease the gradient. But it was longer and steeper than I had anticipated. Views across the valley of the Scafell group helped keep spirits up. 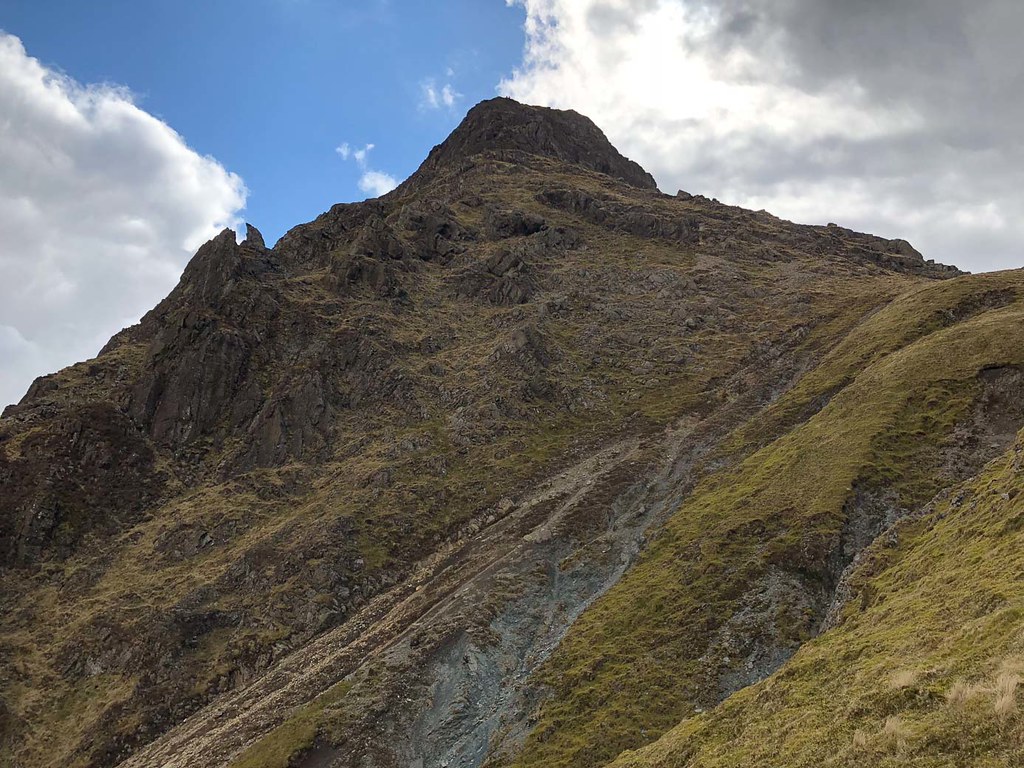 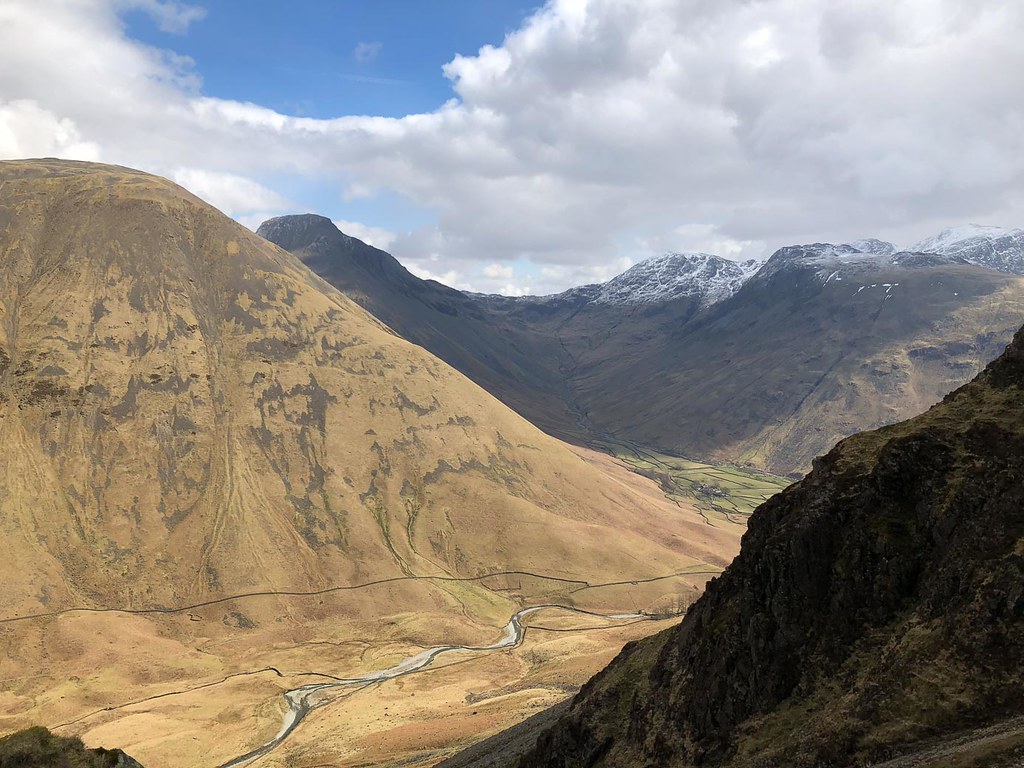 We could still see the cottage we had set off from. 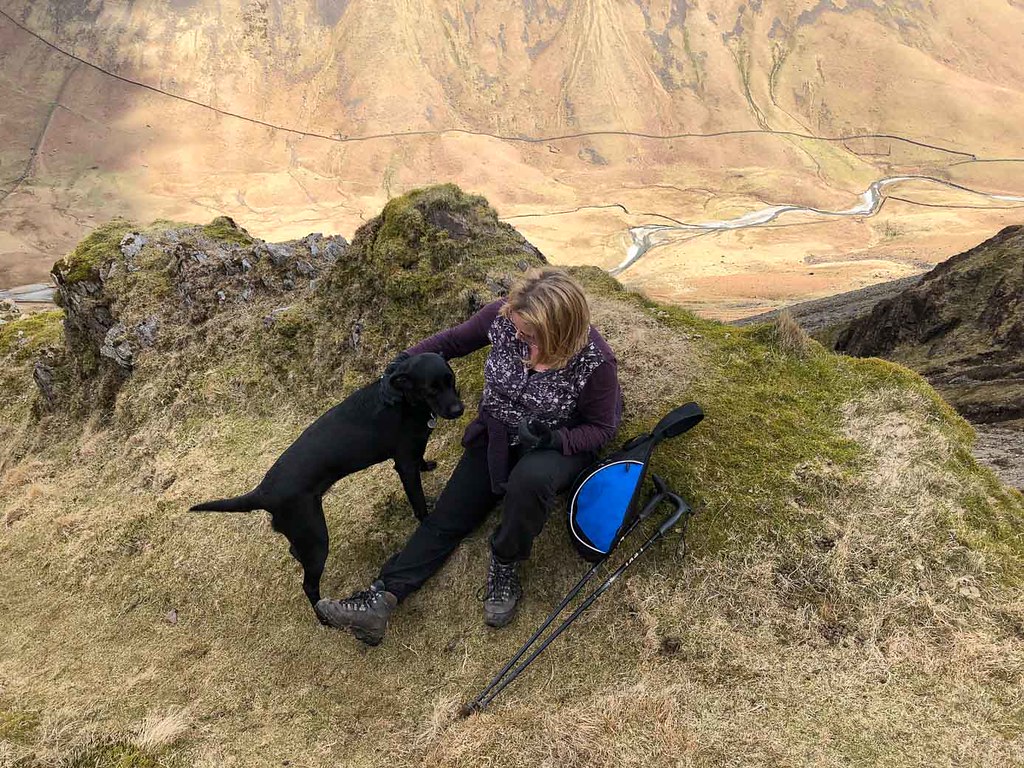 This was the point that I realized I had forgotten to pack the flask of coffee. 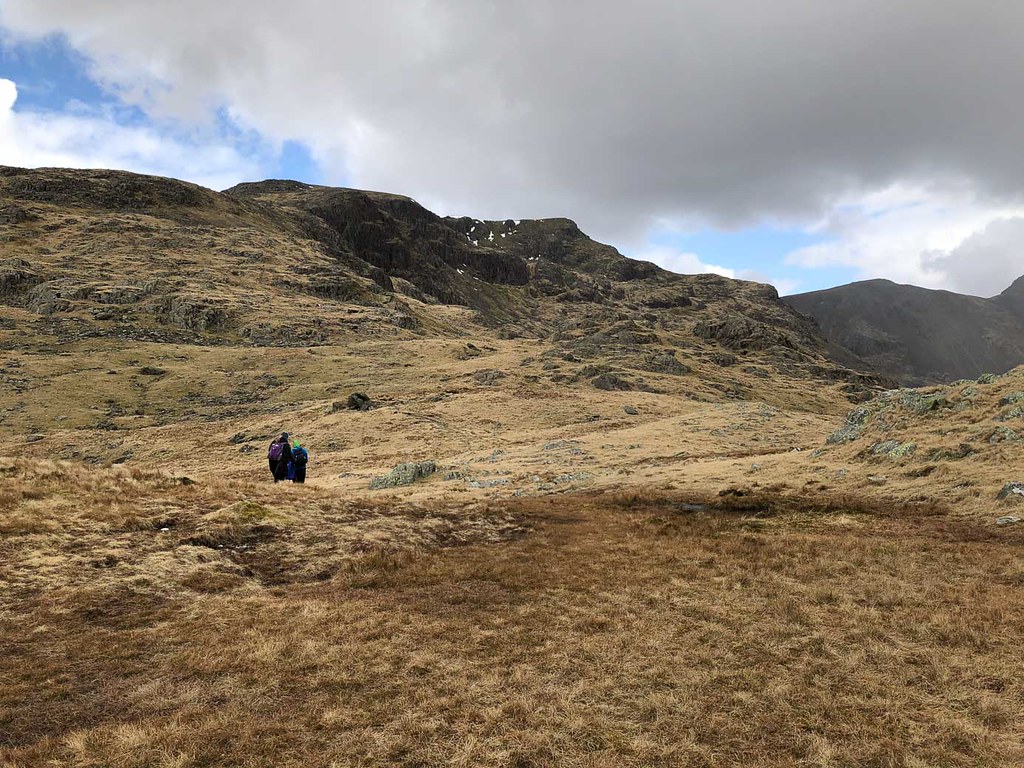 Heading up to Red Pike

We paused briefly to collect our strength before heading up the ridge to Red Pike. The gradients were a lot easier than they had been climbing to Dore Head, but it still felt like quite a long way (I think we were somewhat tired out...) 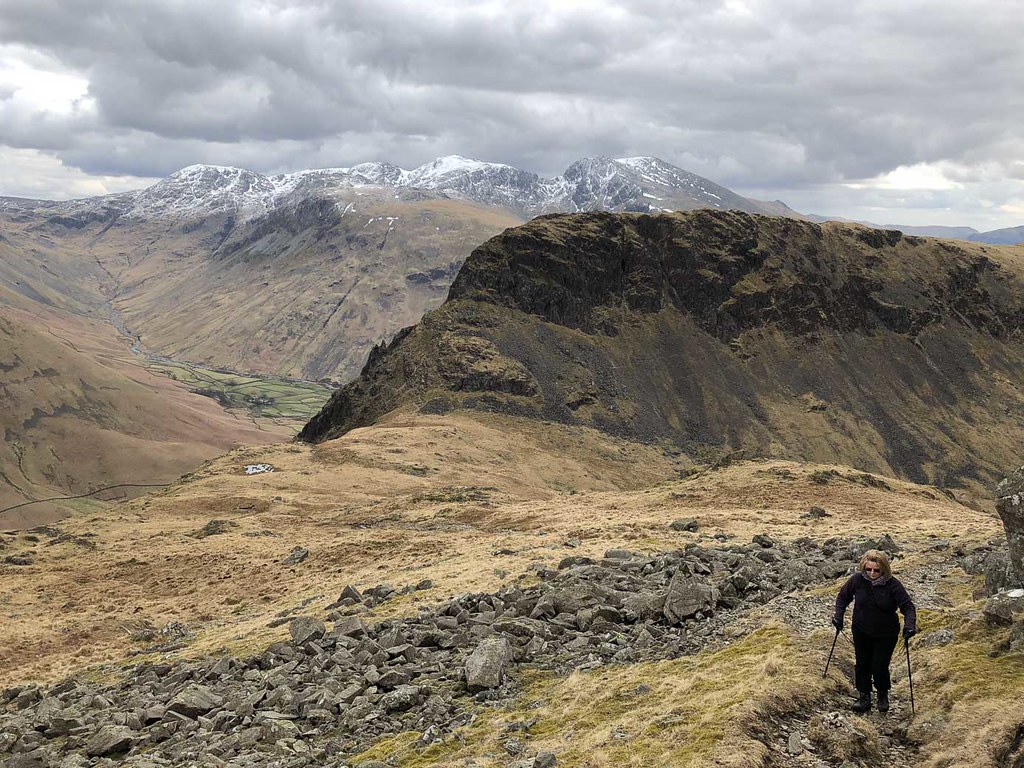 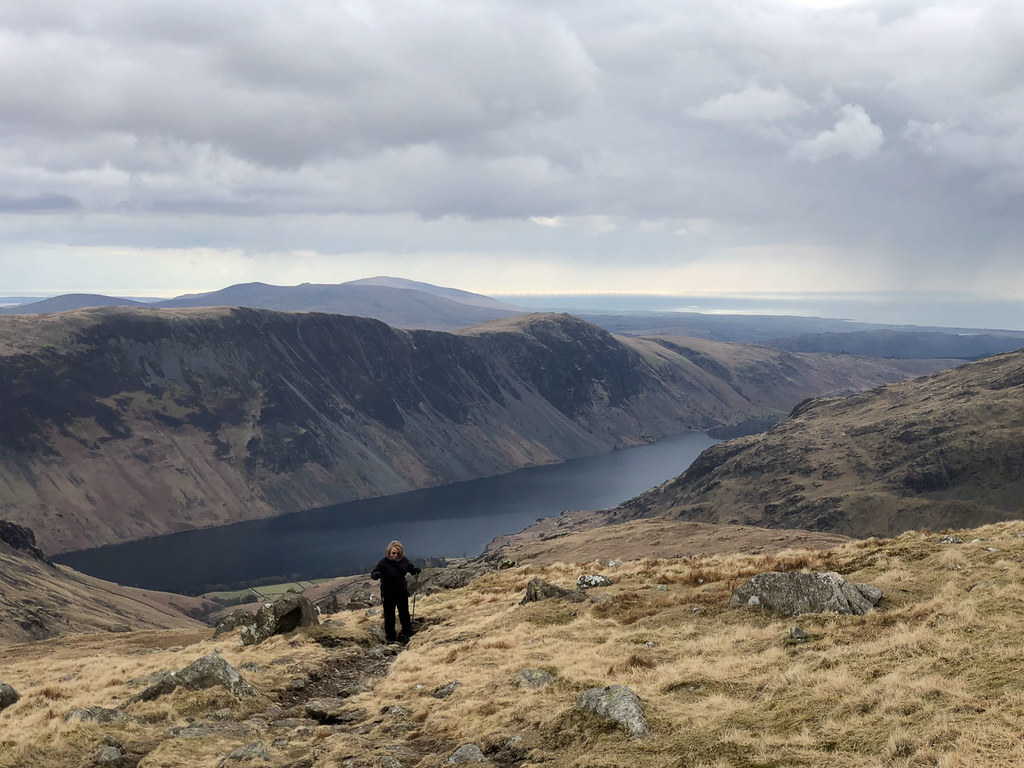 Eventually we reached the top and could take in the views. 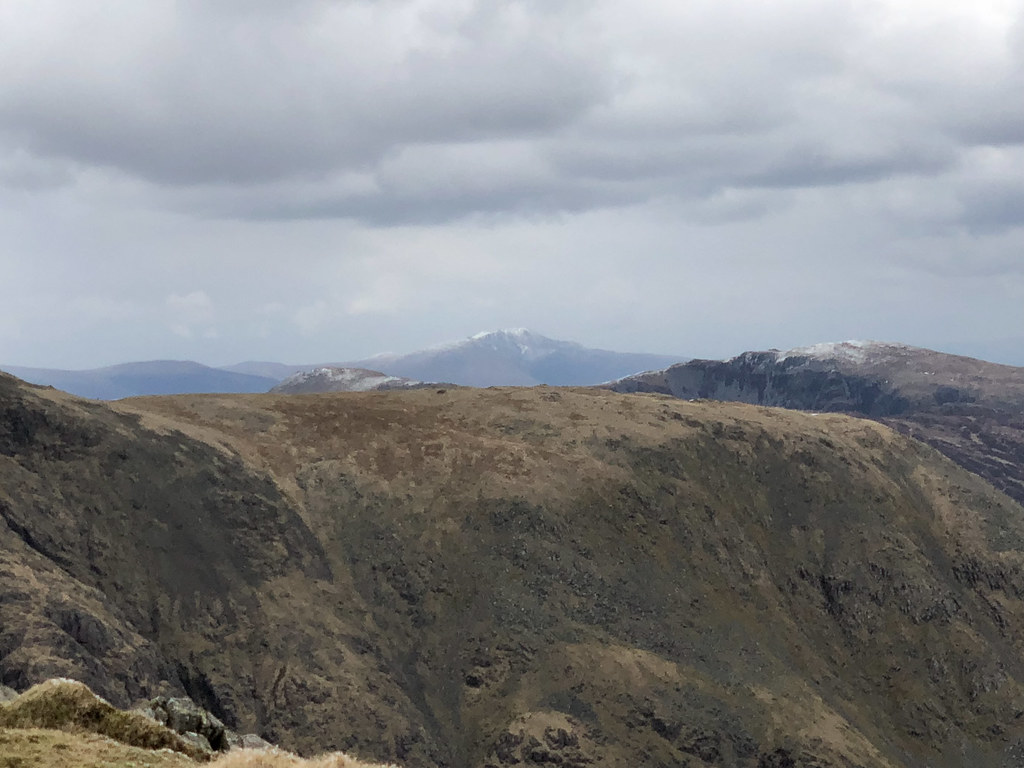 Blencathra in the distance

Thomas reckons our Lakes holidays only really start when we first see Blencathra - so we had to take this photo for him even though he was not there to see it himself. 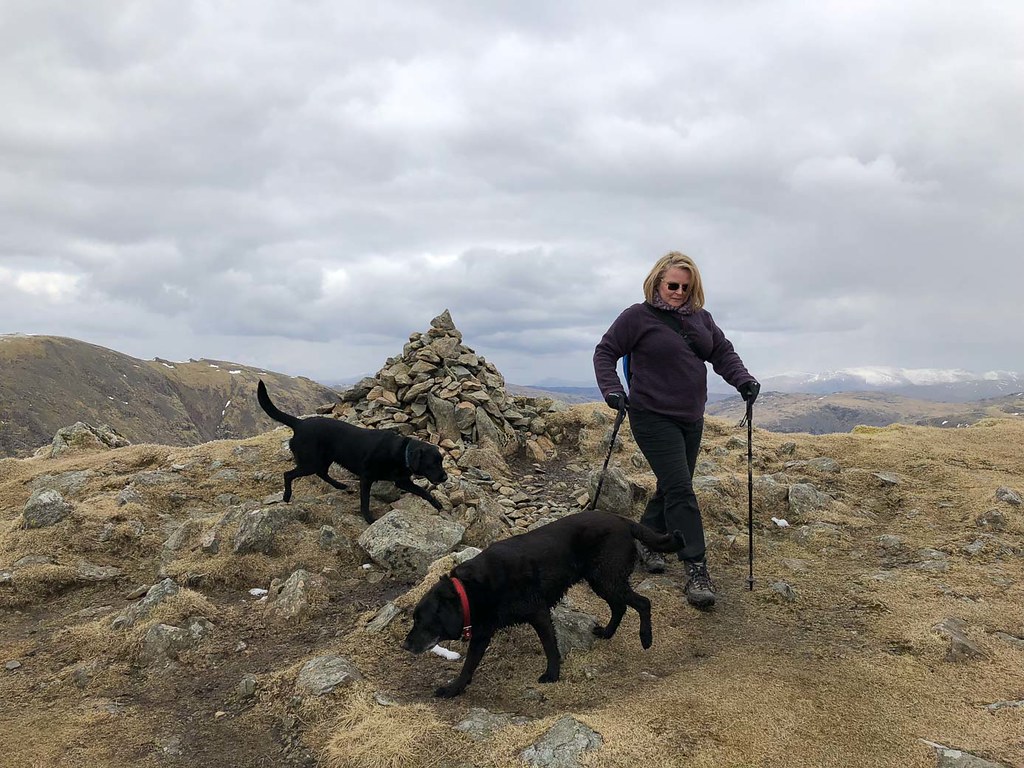 The summit cairn is perched right on the edge of the precipice. 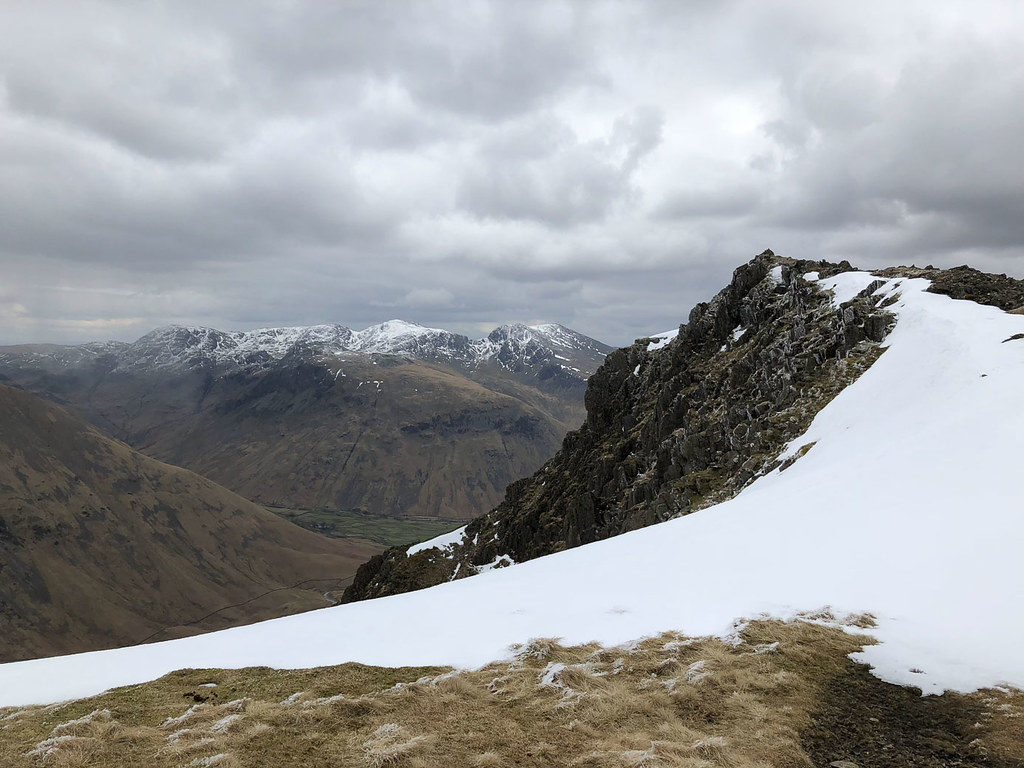 Red Pike - looking back at summit

The precipice is rather more obvious when looking back from a little further down the ridge.

At this point we started thinking about what our options for descent were. We had started a little late, and the climb up the steep section had take longer than anticipated, so we were starting to get concerned that we might not be back before dusk - and there was no way to let the children back at the cottage know that we were running late. I had hoped we might be able to use Wainwright's route up Black Comb, but it's not really possible to find the path from above and missing it would almost certainly lead us over crags. Returning the way we came did not appeal, so it was a choice between returning over Pillar and returning via the Nether Beck valley - concerns over ice on the Pillar ascent meant we chose the latter. 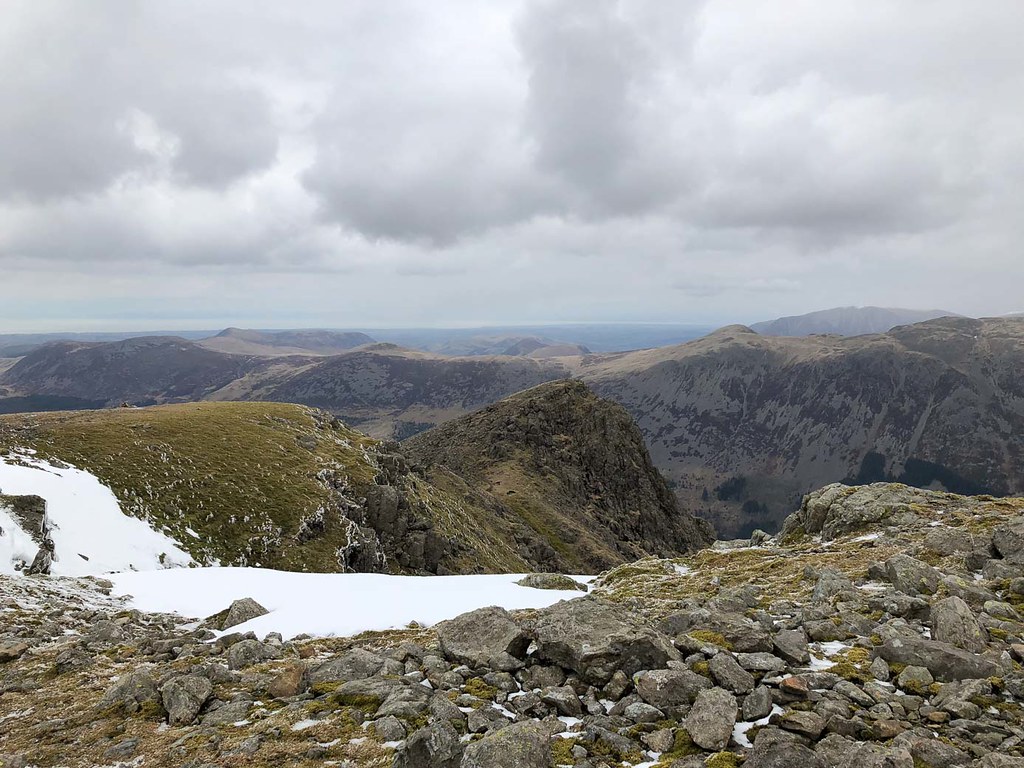 We decided to head for the Nether Beck Valley via Scoat Fell and the Haycock col. At Scoat Fell we debated taking the short detour to Steeple, but we were short on time and energy and the weather was deteriorating, so we decided against it. 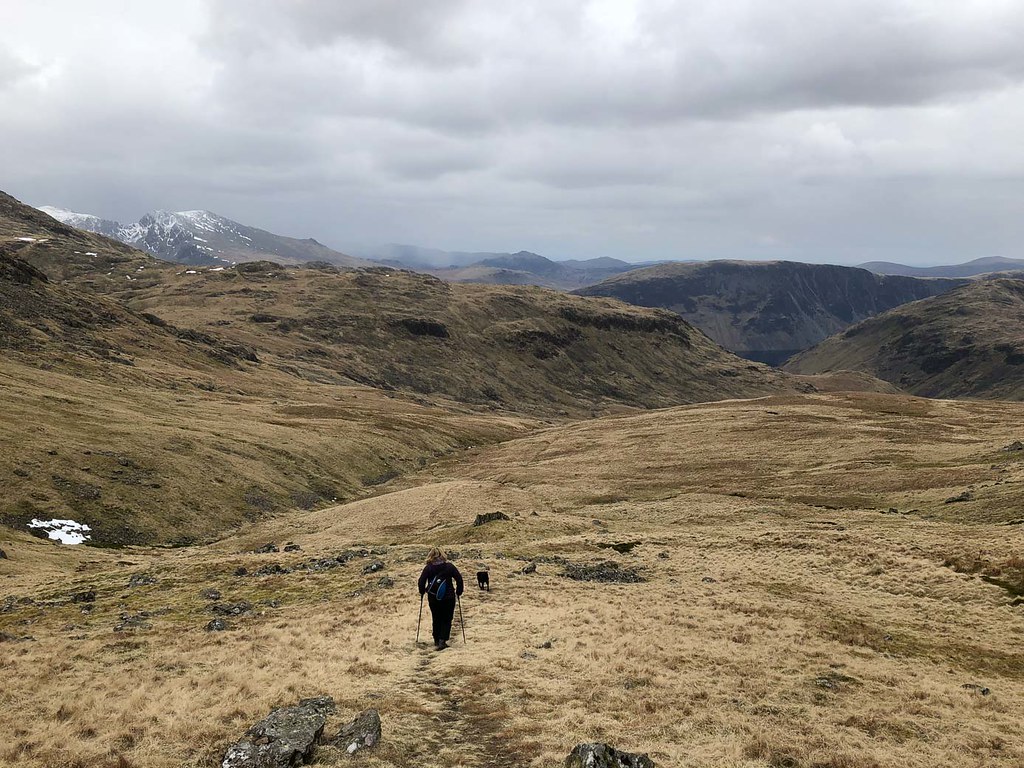 Heading down from Haycock Col

Descent was steady and easy. 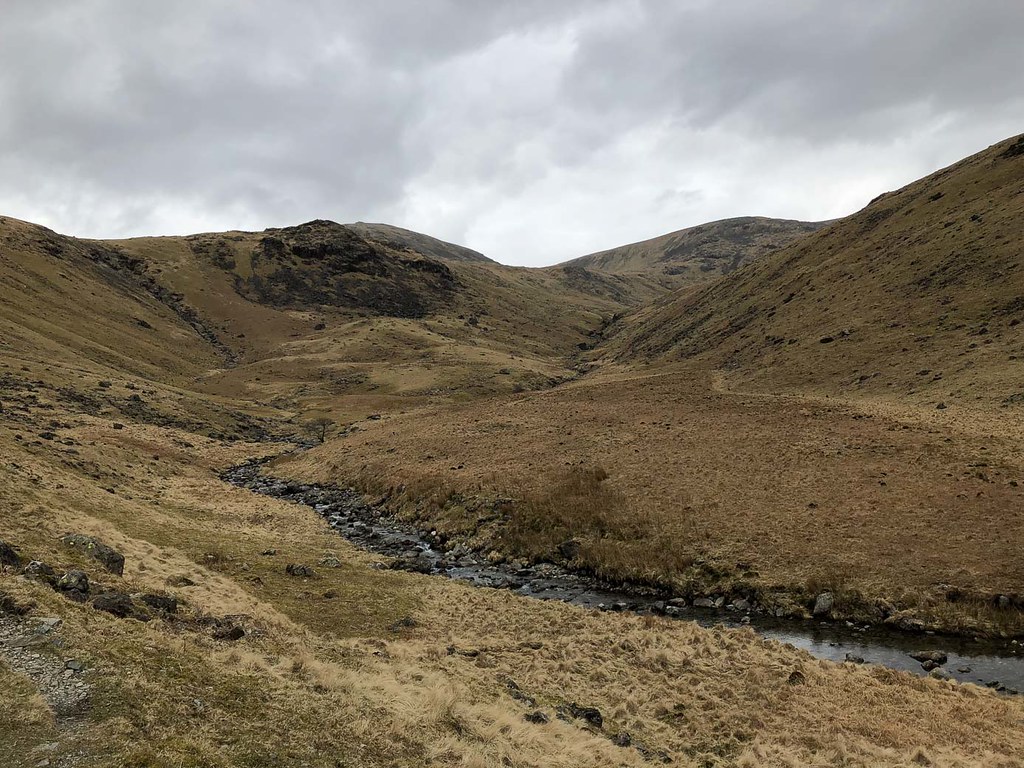 Looking back the "never-ending valley"

But the valley is long, and the path not really made for striding out most of the time, being quite rocky. Spirits were starting to sag at this point. 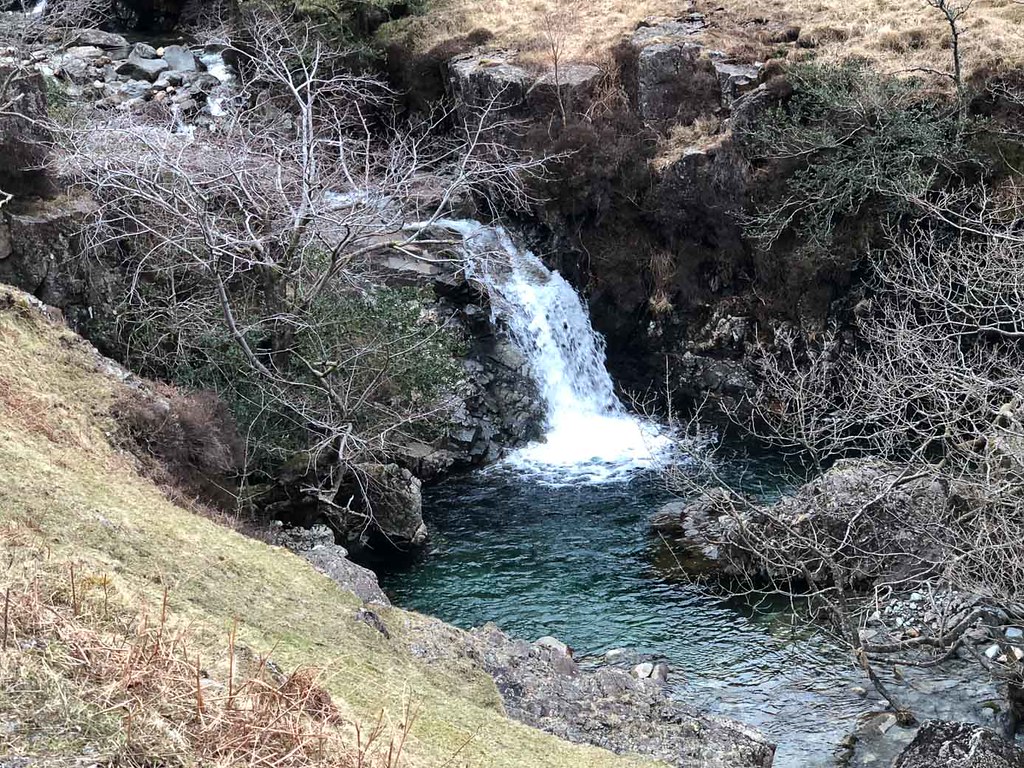 On a warmer day this might have made a lovely spot for some wild swimming - but not today. 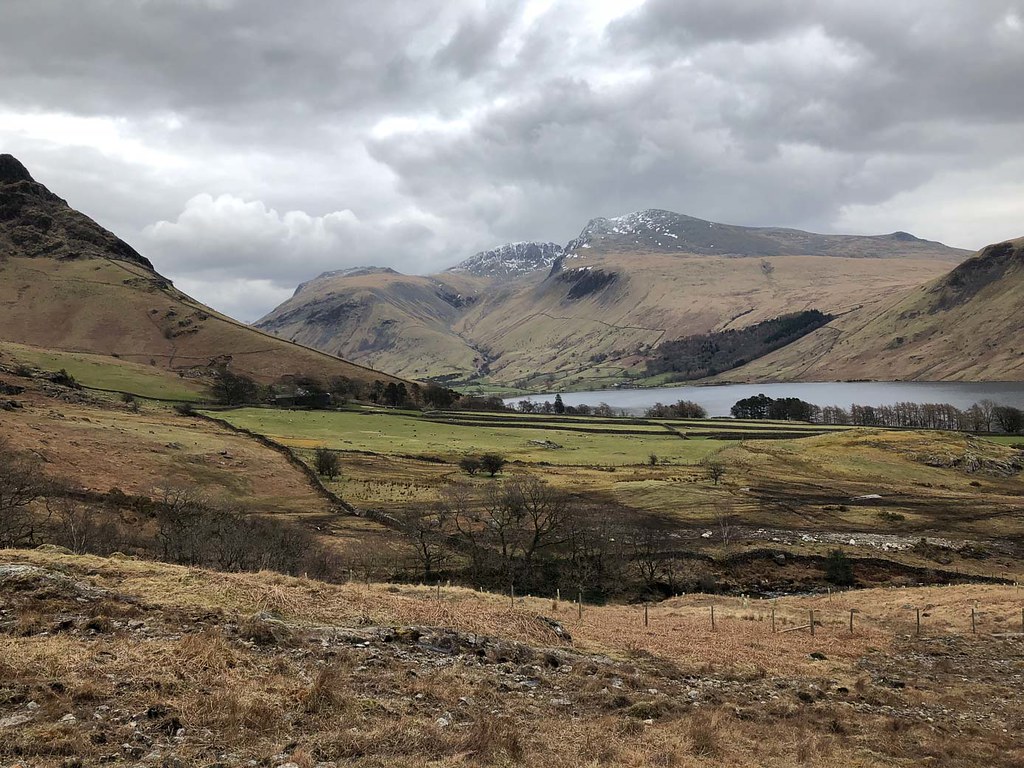 Eventually we reached the road - but we still had a couple of miles to walk along the road back to Wasdale Head. 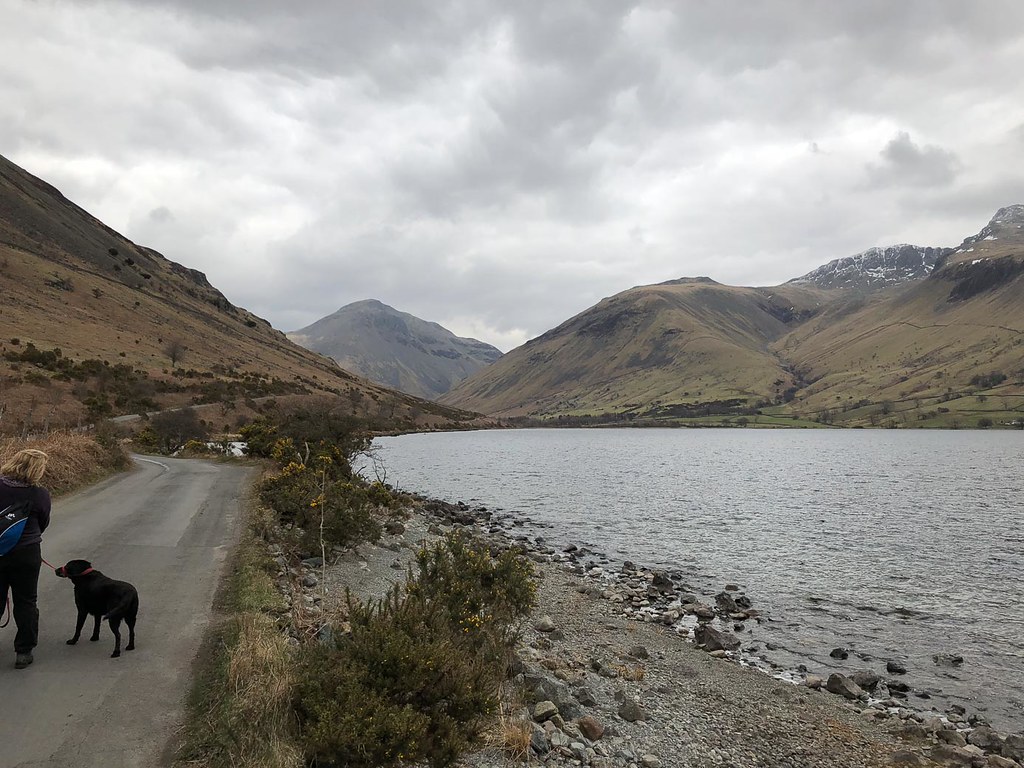 We got back just as the kids were starting to wonder if they needed to start worrying about us. A long day and very tired legs. With hindsight we should probably have gone up via Black Comb or Over Beck, and down via Pillar would probably have made for a nicer and shorter way down...