Planning for this outing started off slightly apprehensive in nature - this could potentially be my most technically challenging solo winter outing. Reports on Walkhighlands for this were typically varied with the majority of concern stemming from the initial ascent up to the ridge from Ballachulish and the final push to the summit of Sgorr Dhonuil.

On a positive note the weather showed all the right signs of being an absolute belter of a day!

During my 04:30 alarm the day after doing Meall Ghaordaidh my legs and brain were a little less willing to get out of bed than I had envisaged. It was a long planned drive up to Ballachulish and as I write this retracing my memory it is disappointing to see how close I was to just bailing out and getting a longer lie.

Admittedly I had a poor nights sleep due to a neighbour of my parents appearing to have a wind-chime fetish. How on earth can anyone appreciate the constant clattering of metal any time it is even slightly windy?!

I guess I could write a whole feature length article dedicated to the Scottish wide ban on non-essential garden furniture that exceeds a yet to be determined decibel level.

By 07:35 I was setting off from my car just next to the Co-op car park delighted I had suppressed my desires for another couple of hours in bed. In winter I am willing to accept the early start - truth be told I maybe over egg the early starts but I never regret finishing at lunchtime if all goes better than planned, and I much prefer this to scraping back to the car just before dark. 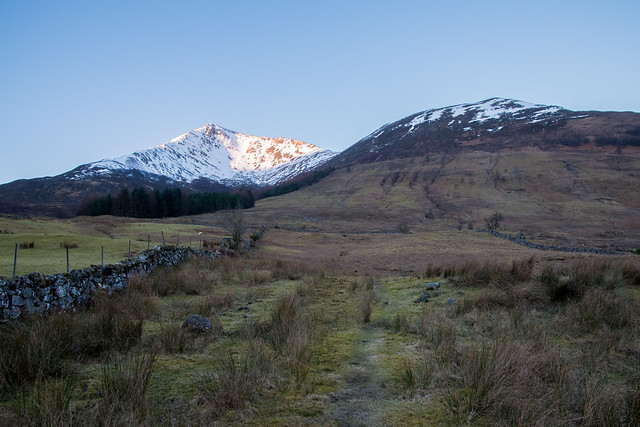 It was a bog-fest given the recent snow melt and yes it was steep, just about as steep as I had expected. I opted for the tried and tested method of putting the camera away and focusing on mini sections - one tree, shrub or obvious rock to the next. On the plus side when I reached the next tree, shrub or rock the view back down towards Ballachulish and Loch Leven was always spectacular.

Enjoying the view mentioned above. 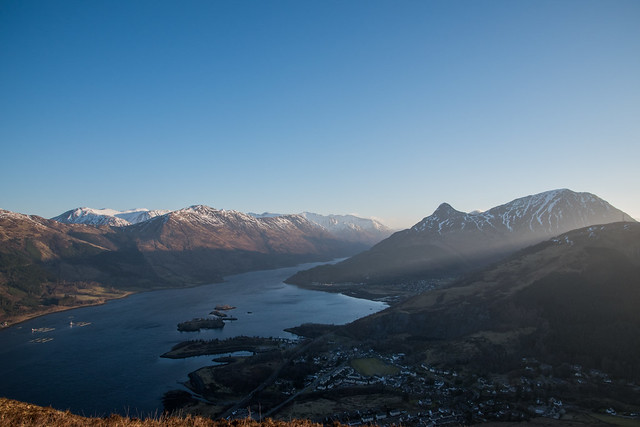 The sectioned marked on the OS maps as Beinn Bhan offered a great flat grassy plateau - which has been duly noted! In one sense I do not want my journey around these 282 to ever end, on the other hand I can not wait to be finished (touch wood) so I can spend time camping in some of my favourite locations without the "pressure" or "need" to get to the summits.

View from my future campsite up towards the Sgorr Bhan ridge. 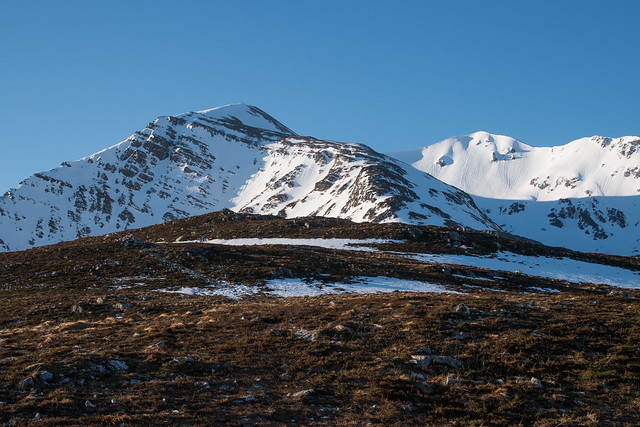 Based on the telephone mast I assume this is looking down Glen Coe? 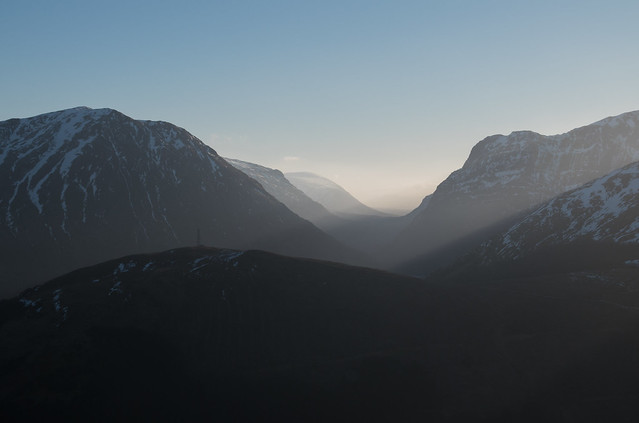 Looking down Beinn Bhan towards Loch Leven with the Ben basking in the sunshine. 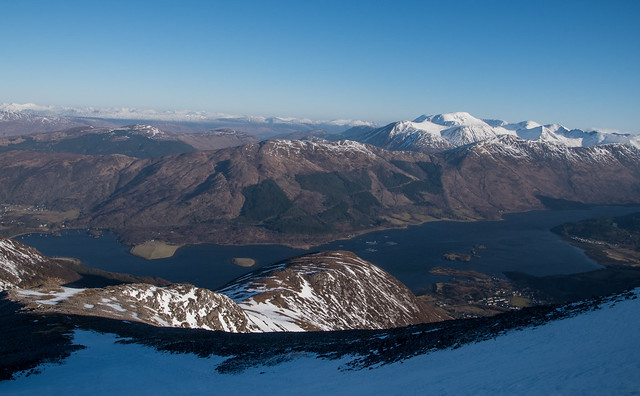 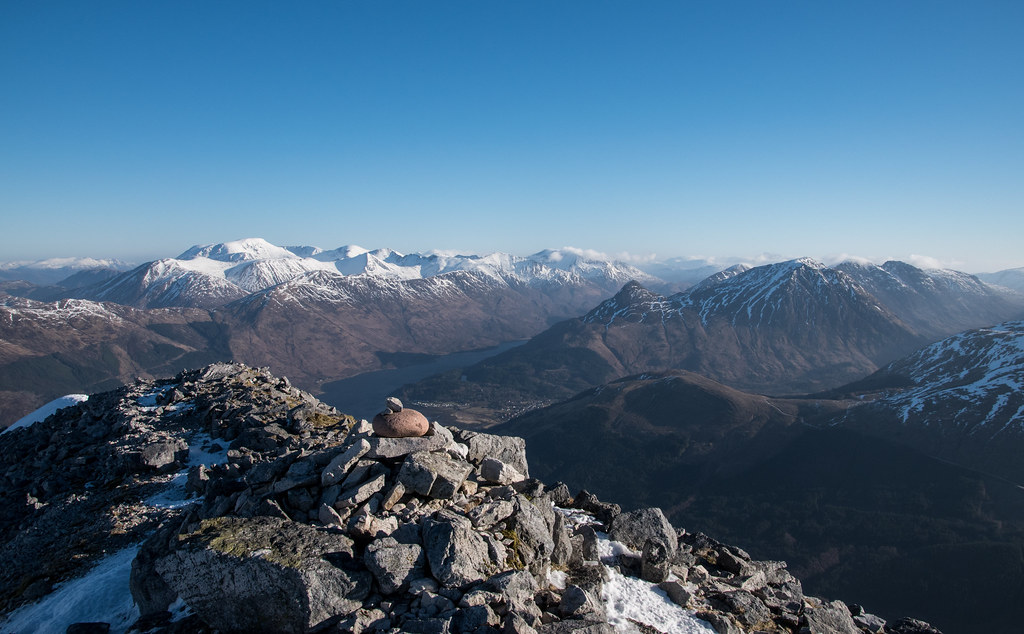 I spent a bit of time at the summit of Sgorr Bhan admiring the sweeping curve up towards Sgorr Dhearg, mostly farting about with the camera and self-timers and appreciating what must be one of the best feelings in life - viewing future summits of the day with no expected cloud interruptions! 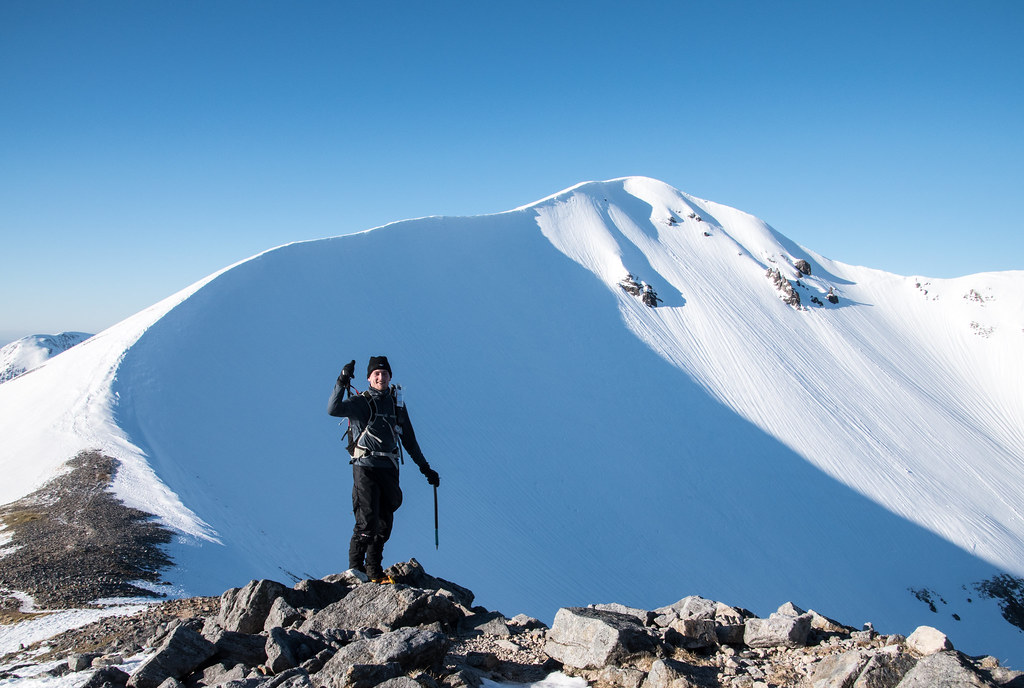 After taking a tremendously wide route to stay well clear of the forming cornice it was about time to briefly stop and admire the views behind. This got me thinking maybe this route would be better done in reverse... 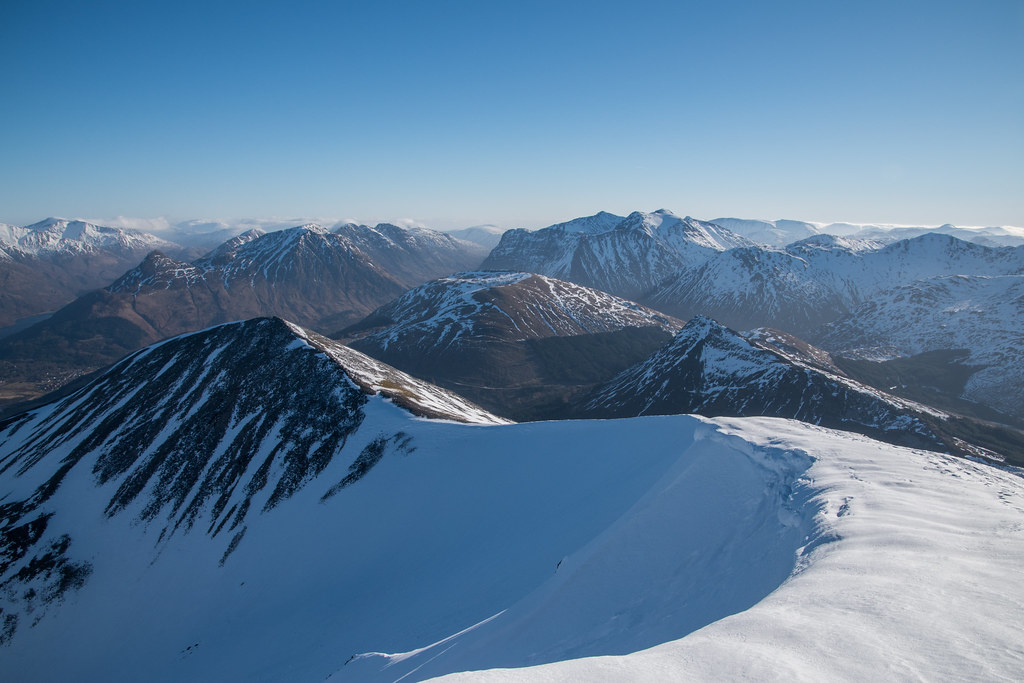 It was 10:30 by the time I had reached Sgorr Dhearg, which meant even with numerous stops and having to get the crampons on it had taken just less than 3 hours from the car and Sgorr Dhonuill did not look like it would provide too much of a time challenge.

Looking towards Sgorr Dhonuill from Sgorr Dhearg with Loch Linnhe in the background. 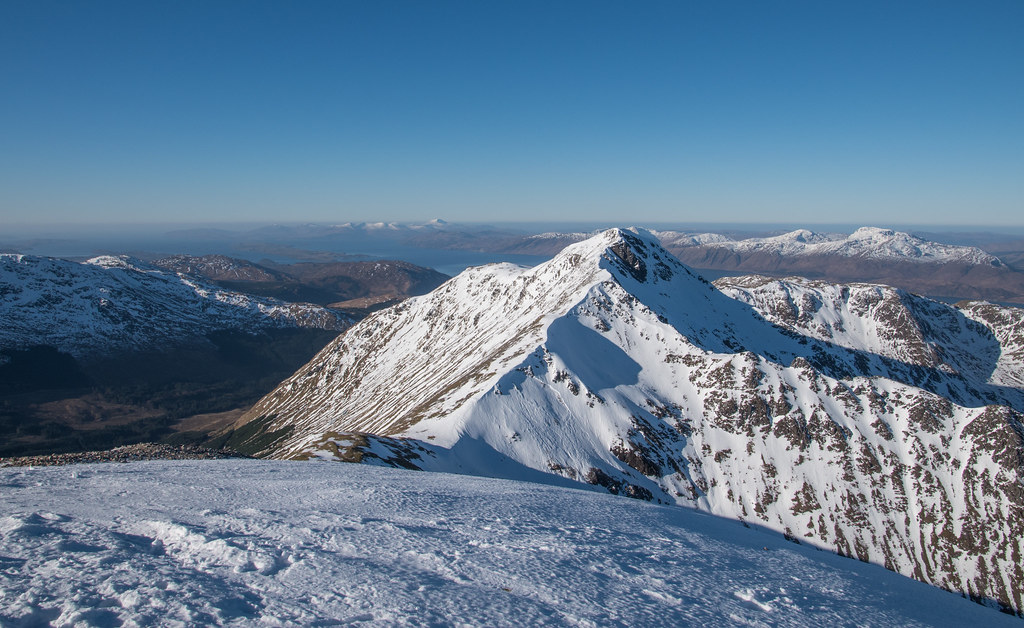 The first summit was the only portion of the day where any wind picked up, it was far from dramatic but enough to prevent me from lingering about so within minutes I set off down with a plan to make a pit-stop for lunch once I found a good place. This really meant when I found a rock that looked comfortable - having this as a stopping criteria you know it's a good day weather-wise!

Lunch views and all of a sudden Sgorr Dhonuill was looking more challenging... 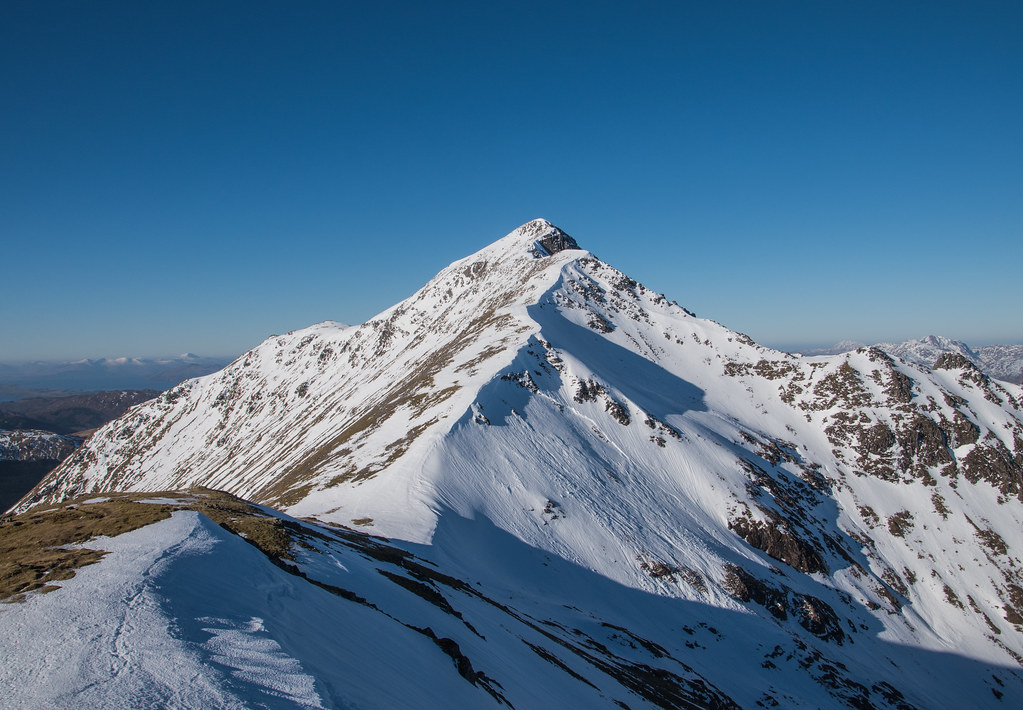 Making progress towards Sgorr Dhonuill and it seemed to become more and more frightening. At first glance it looked like an easy walk with scrambling only required if you fancied. In fact it appeared easier in winter a clear path from those that had imprinted the snow beforehand. After a couple of hundred meters it began to look like ropes, ladders, multiple axes and all sorts of decades of experience was going to be required

Nothing ventured, nothing gained.

Once a bit further on any remaining nerves eased - looking simples! 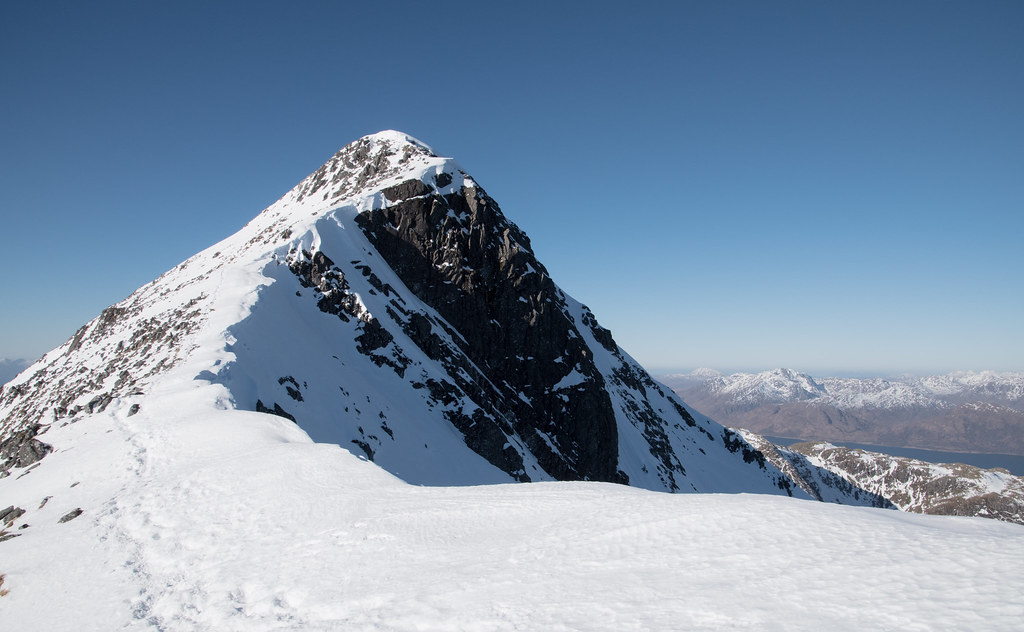 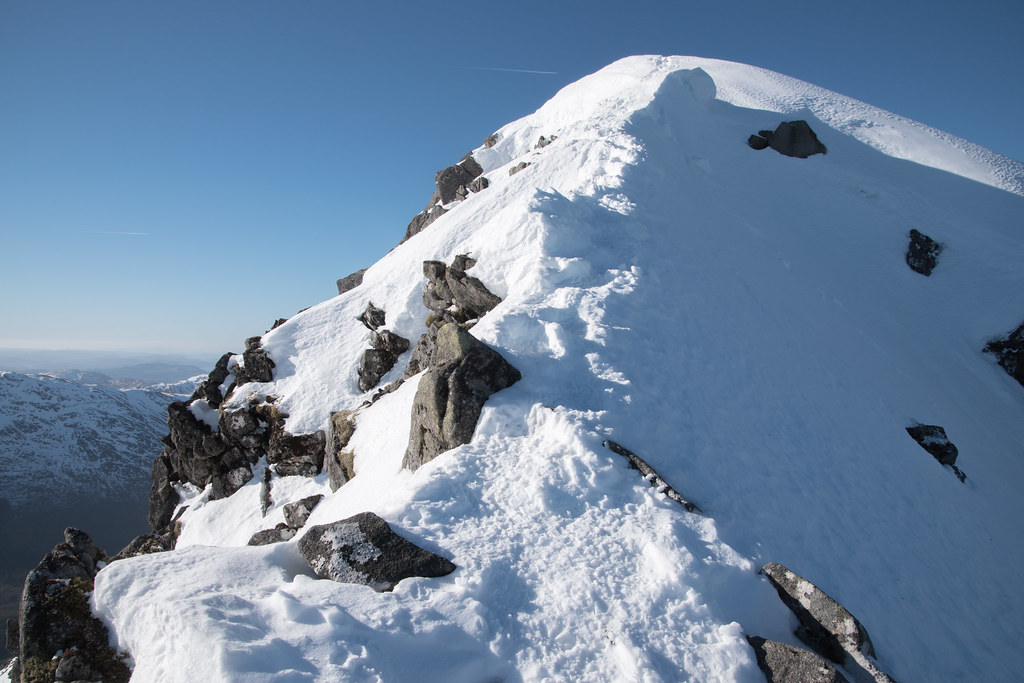 Personally I did not find the exposed section too much of a worry, but then again it is all relative and I do not mind heights (put me in a swimming pool it is a different kettle of fish!). I can understand why this would put peoples nerves on the edge and I would not fancy being there with strong wind gusts... but even saying all that it is far from any scrambling required.

The top of Sgorr Dhonuill. 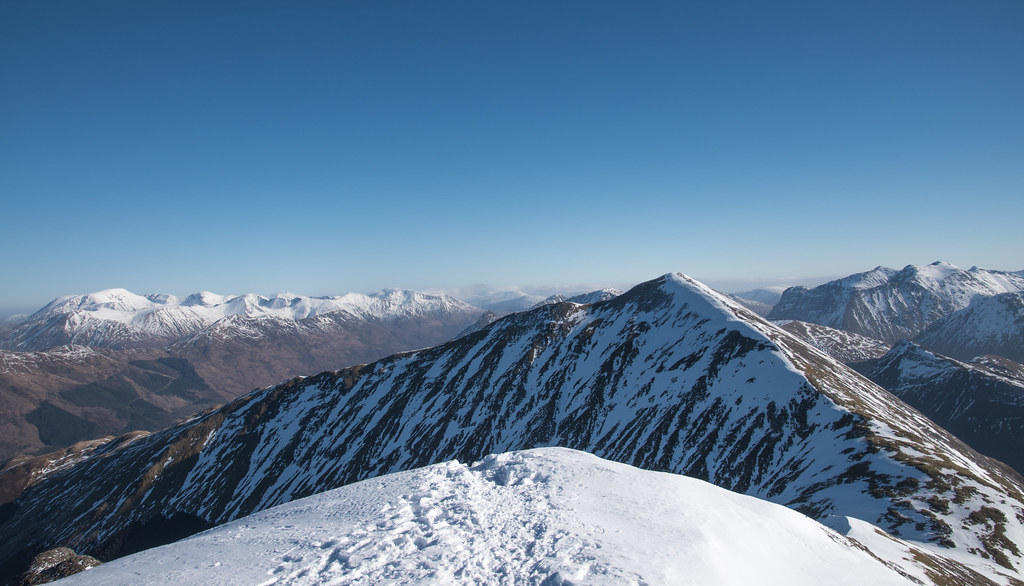 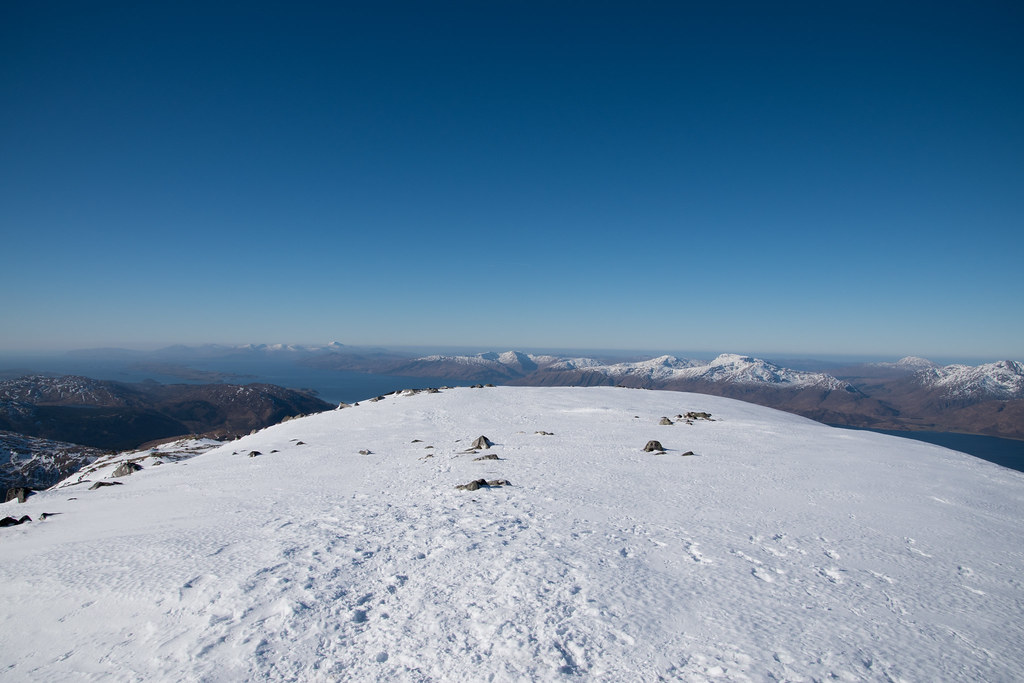 It took approximately 1 hour from summit 1 to summit 2, which included the time to stop and devour some lunch and plenty of photo stops. This also meant I had now only been walking for 4 hours and was just about ready to tackle the long walk back to the car.

From the summit of Sgorr Dhonuill I finally was able to see my first fellow walkers of the day reaching Sgorr Dhearg. They obviously have a bit more confidence in their winter walking pace and set off at a more sociable hour, or had a longer drive up than me.

As it was so early on instead of taking it easy I started trying to work out what time I could possibly be back in Aberdeen, I knew the lads were one short for the weekly 5-aside at 20:00 so I thought I might try help out there - what a daft idea this was!

So many beautiful hills with the low cloud just coming in from the east in the far, far distance. 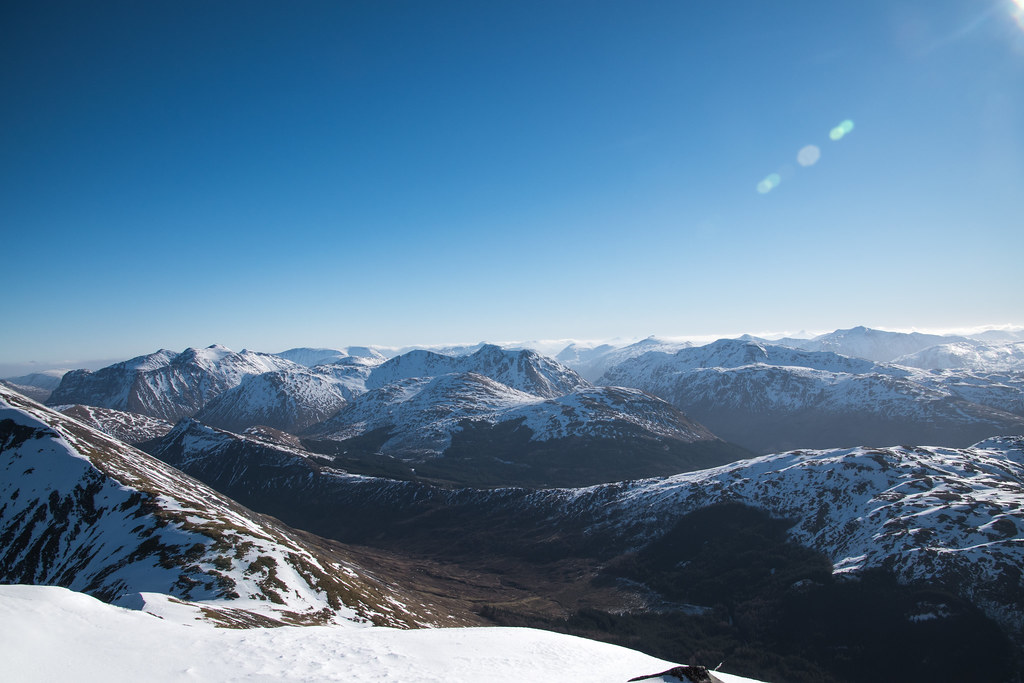 Time to head towards the forrest! 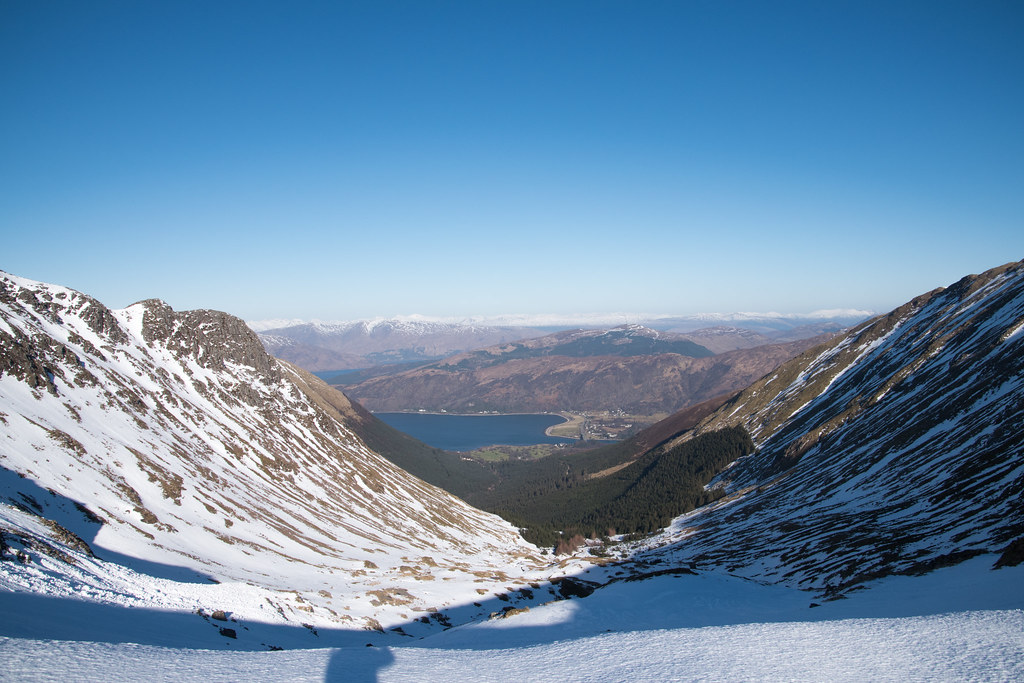 By now I was out of water but thankfully it would not take long before I was able to find some fresh and very cold running water. When I am out on the hills I seem to go through galloons of water and this is something I completely took for granted in summer, particularly in the Cairngorms where there is water supplies nearly everywhere. This being my first winter season made me realise how much more planning and working out where the freezing level is / has been for the last couple of weeks is required.

Looking back - two chaps in here for some scale. 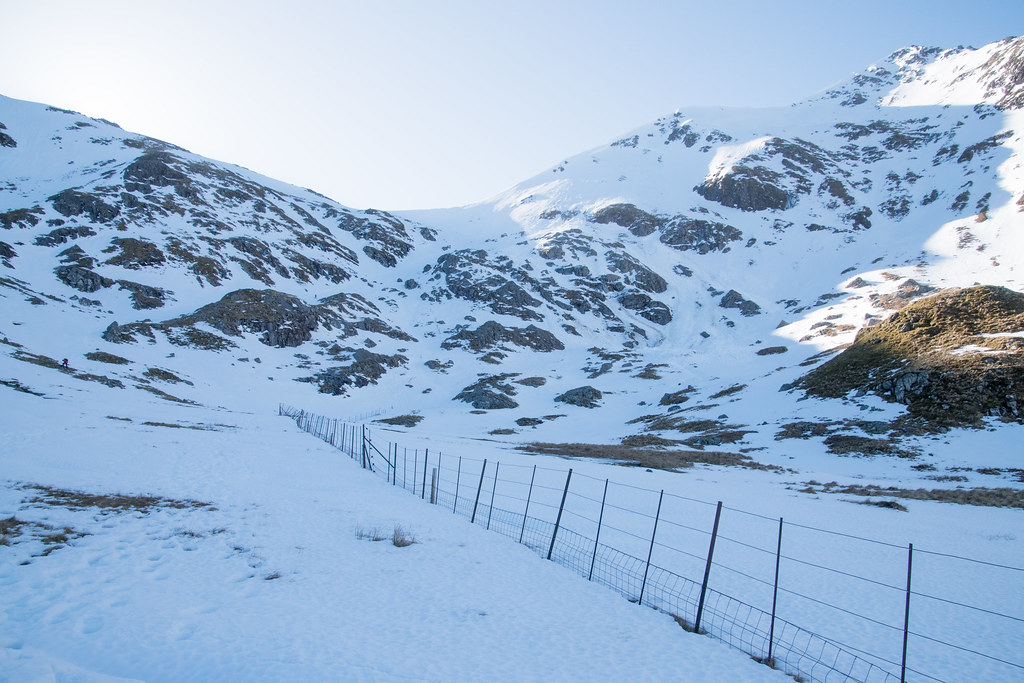 In the forrest and just about to take my crampons off. 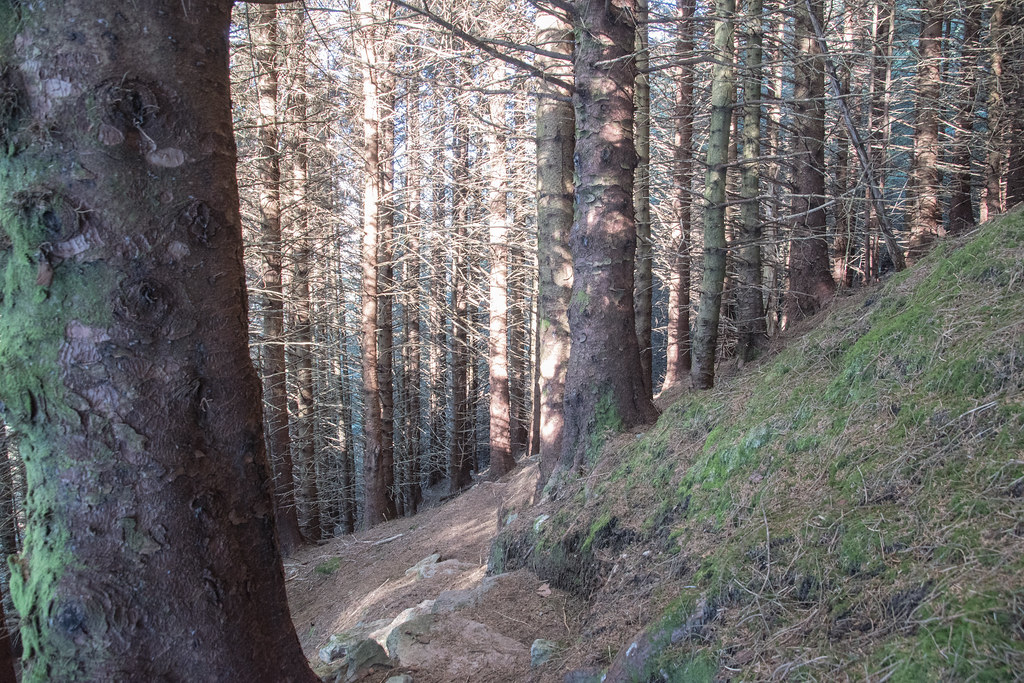 Inevitably just as I had taken my crampons off within less than 200m the ice reappeared on the path. This made walking annoying slow considering I was trying to make it back for a game of football and also wanting to catch the football on the radio 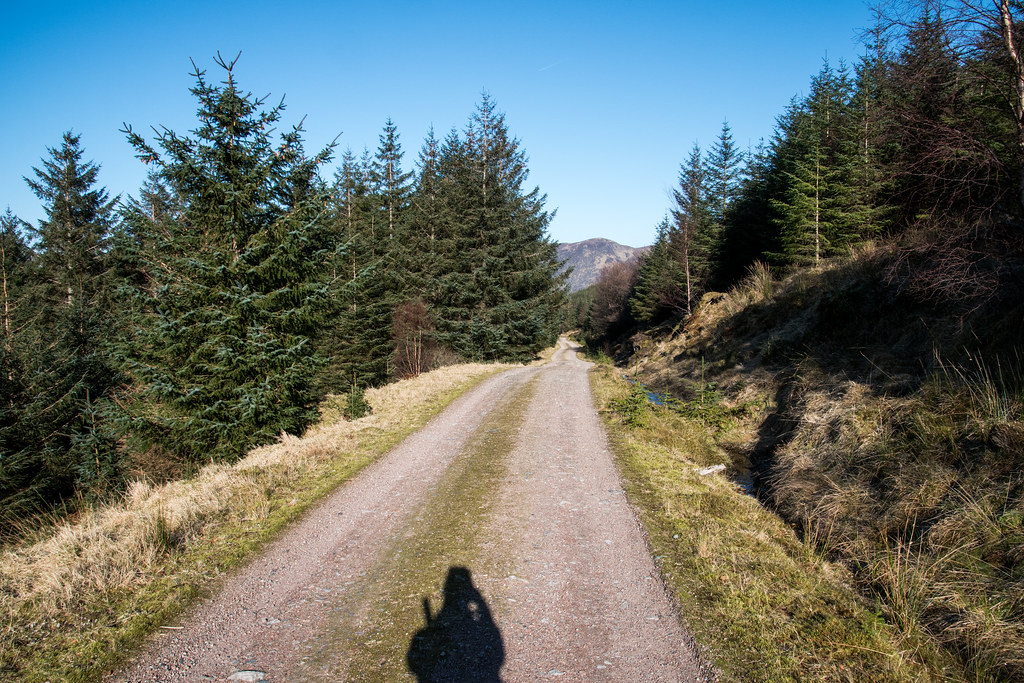 Really struggled to place these on the map but a great last view. 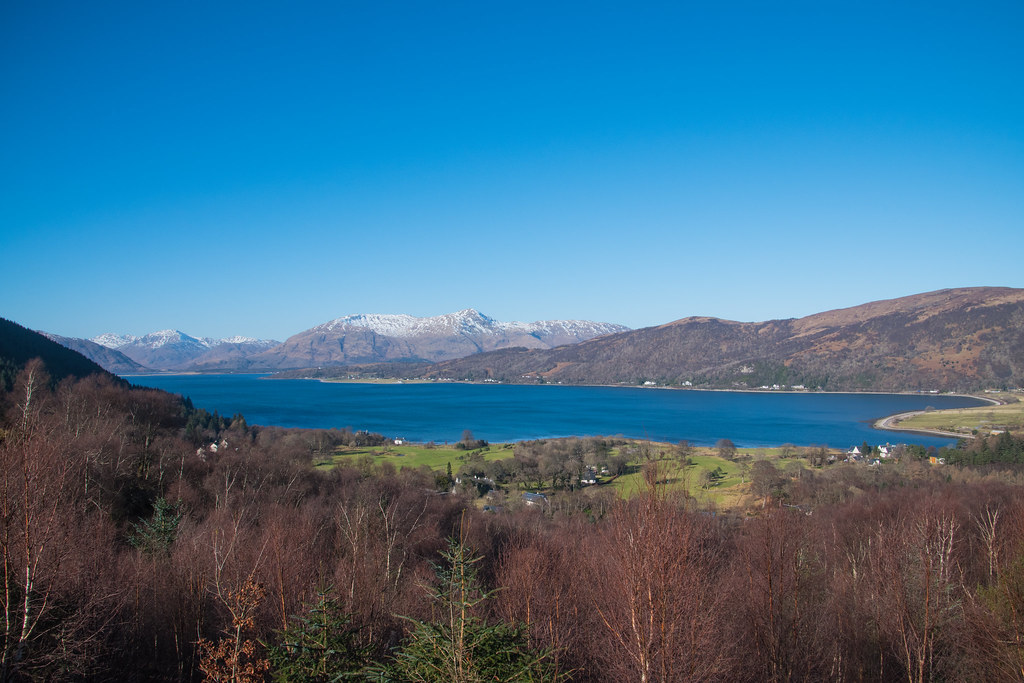 I was back at the car by 13:30 - taking just under 6 hours but the weather was on my side and 90% of the snow was well consolidated and easy going in crampons. I now made the typical mistake of being incredibly hungry and thirsty and blindly walking into the Co-op. After spending a miniature fortune I had about six different drinks with a variety of caffeine and a car loaded with food to make the journey back to Aberdeen more appealing. Remerakaby I was back in Aberdeen by 18:00 which left me just enough time to unpack, shower, demolish a pizza and get down to the 5-a-side pitches for kick-off.

I slept well that night!

I am confident the photos can not possibly do this outing justice but in brilliant conditions this route is spectacular and rightly so must be up there with some of the best. I am glad to have completed this in winter but I am equally sure it would be remarkable in the summer months. Looking forwards to spending a night in a tent up here at some point in the future!

Top quality pictures, and day by the looks of it.

WHAT a stunning day, and a similarly stunning set of pics to illustrate it. I walked these 2 in mid-November last year, and thought I'd had fantastic weather, but your day certainly topped it!

These were my first Munros; a subsequent effort to do them in 'winter conditions' just ended up being very wet and windy, with no snow whatsoever

What a stonking day!

That bit just below the Summit of Dhonuill is indeed quite exposed, if pretty simple.

I found the exposed section on Dhonuill very easy, but it was in summer conditions, I bet it's quite unnerving with snow on it!