Dunmaglass: the land that hillwalkers forgot

Dunmaglass: the land that hillwalkers forgot


In our quest to explore the region east of Loch Ness we're hoping to visit all Sub'2 Marylins in this area, as they seem to be interesting little hills with plenty of character. After Creag nan Clag and Tom Bailgeann earlier this winter, time has come to add Beinn Mheadhoin and Creag a'Chliabhain to the tally. As separate ascents, the two hills can be easily done on the same day with a short drive between them, but we were looking for slightly longer walk that would allow us to combine them in a single route. Here is what we came up with:

Track_DUNMAGLASS SUBS 24-03-18.gpx Open full screen  NB: Walkhighlands is not responsible for the accuracy of gpx files in users posts
It looks complicated, I know, but the recipe for this route is easier than the shape on the map

The first stage is identical to the ascent route for Corbett Carn na Saobhaidhe. Starting from Dunmaglass (space to park by the phone box), we followed the estate track for 4.5km, did a circular ascent of Beinn Mheadhoin (a quickie) then returned to the glen, crossed to the eastern end of Loch Conagleann and climbed Creag a'Chliabhain by its north-eastern ridge, returning by the ditch of Conagleann, where there is a good track by the loch. Going is generally easy, even on pathless sections, only one slope with deeper heather and a few bits of bog. Good going as for unfrequented Subs in the middle of the land that hillwalkers forgot!
Parking space by the phone booth:

The track past Dunmaglass Mains was used for windfarm construction traffic so you can still land a jet on it. We had walked up this road before, to climb Carn na Saobhaidhe, and not much has changed since: 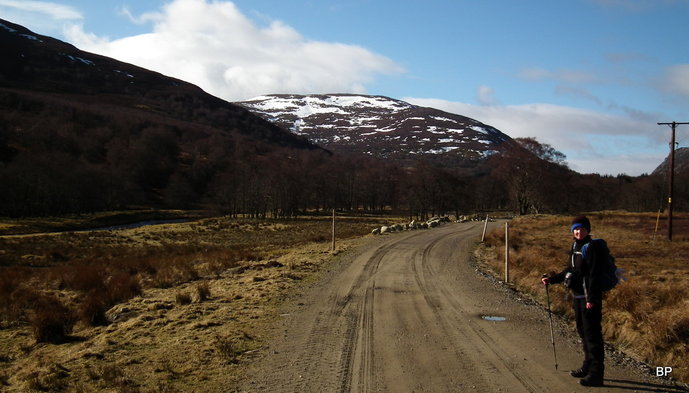 The morning was sunny but with snow showers forecast for later in the afternoon and cold wind pinching our faces, we were happy to stick to lower hills rather than venture onto Munros.
We marched quickly to the bridge over Allt Uisg an t-Sidhean: 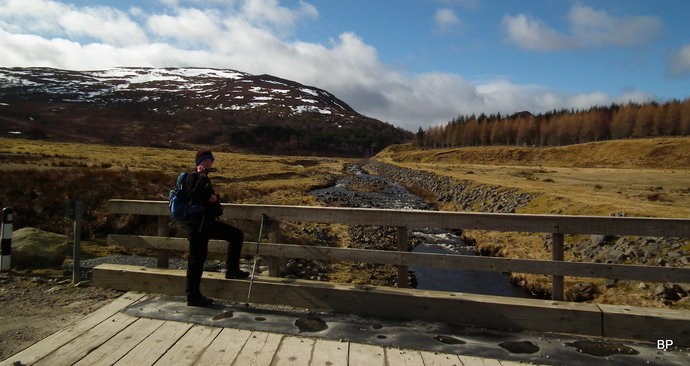 Our second hill of the day, Creag a'Chliabhain, looked very "ridgy" from here!

We continued on the windfarm track for another kilometer, gaining height slowly. At the junction (601211) we turned left onto more grassy track contouring the southern side of Beinn Mheadhoin .
Looking back at the junction:

After another 0.5km we left the track to climb the heathery slopes to the summit of Beinn Mheadhoin. The drop for this particular hill is only 152m, right on the borderline for necessary reascent for Marylins, so it is possible that a new survey might take this Sub of the list

As good a spot as any other to start the pathless climb: 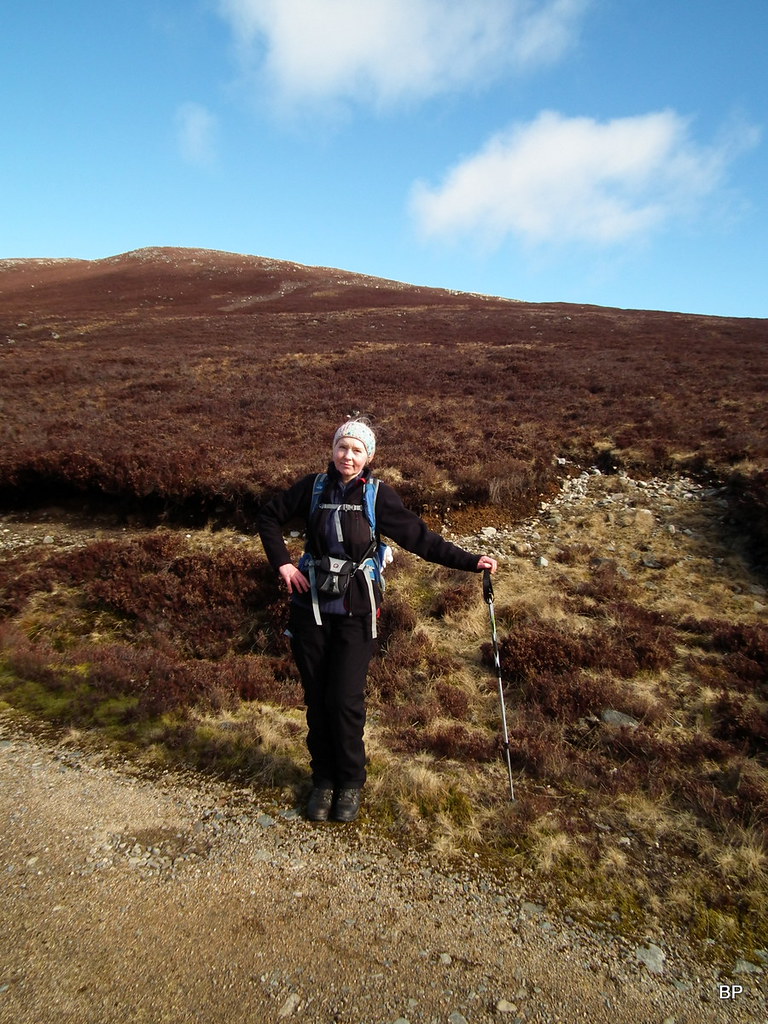 2018-03-24 dunmaglass subs 035 by Ewa Dalziel, on Flickr
Might be pathless but it's quick, easy terrain... About half way up we had to stop to dress up as the predicted snow shower arrived.
Beinn Bhuidhe across the glen, might be much bigger a hill (711m) but it's not on any main list so nobody climbs it

But it looks good in photos (apart from the wind turbines to the right):

When we arrived on the summit, we were welcome by cold, gusty wind and a surprise rainbow: 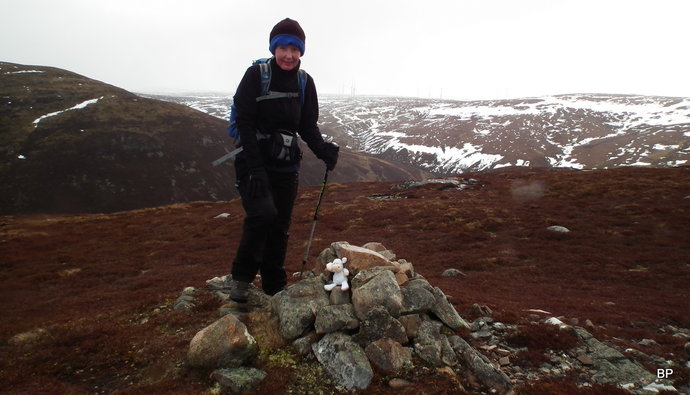 The summit area has two cairns, the smaller one is higher. After a quick pose on the true summit, we escaped to the shelter of the larger one, wrapped up and waited for the shower to past, sipping hot tea. Weather soon improved and we could take some photos even with some blue sky in the background:

Looking north the way we came:

Earlier on, when we walked below the northern slopes of Beinn Mheadhoin, I spotted a forest track climbing some distance up the hill, so now, instead of returning the way we came, I suggested we dropped the N side of the hill to pick that track. To start with, it was easy going with good views to our second target of the day:

The Folly in the forest near Dunmaglass Lodge: 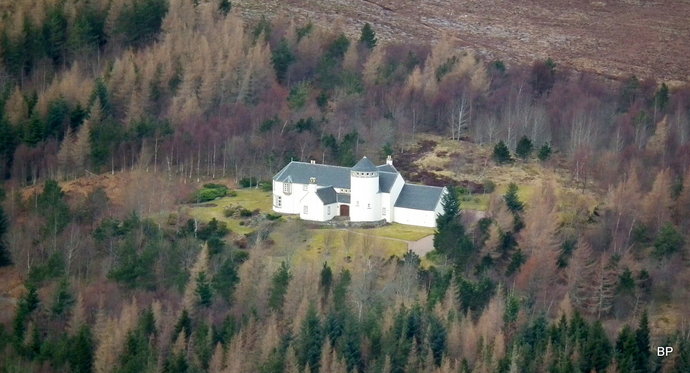 Panoramic view from the descent:

Lower down, the slopes are overgrown with high heather and quite bumpy, so maybe not the best route after all, but eventually the ground becomes more grassy and in the end, we landed on the track. Before returning to the windfarm road, we had to climb a metal gate, which was not padlocked, but the latch was so rusty that it got stuck and we couldn't open it, try as we might

Once on the main road, we crossed back over the bridge and picked a grassy track on the western side of Allt Uisg an t-Sidhean:

That track ends by a high fence, but there is a stile provided for walkers. Once across the stile and a wooden footbridge, we crossed the grassy meadow to join another track, leading to the causeway at the northern end of Loch Conagleann: Beinn Mheadhoin from the causeway: 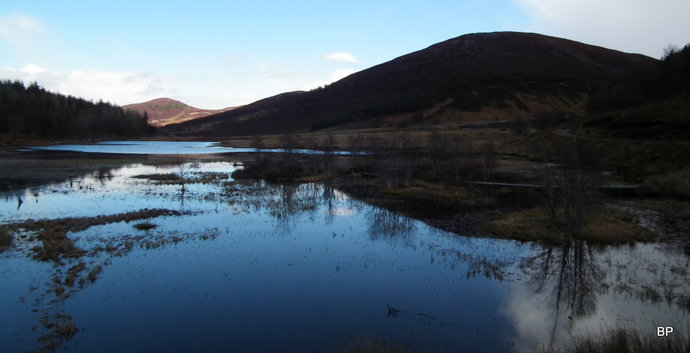 The ridge to climb! Mouthwatering! 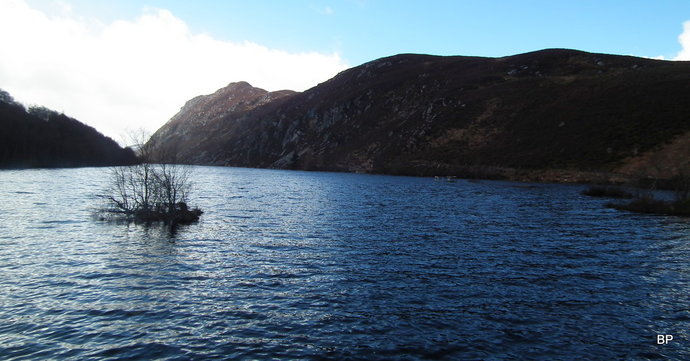 From the end of the causeway and past a metal gate, we followed the edge of the forest for a short distance, before striking SW along the ridge. The terrain here is very overgrown with heather and in summer months there would be bracken, too. The slopes of Creag a'Chliabhain are being currently planted with new forest, so we had to be very careful to avoid stepping into freshly dug holes or trampling over little pines. Views were amazing already an even with more cloud pushing in from the west, we enjoyed the ridgewalking 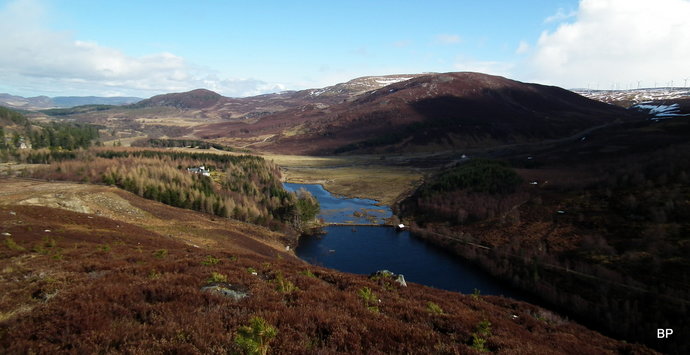 Creag a'Chliabhain is a wee gem. It has so many little tops, rocky outcrops, nooks and crannies, to keep a man like Kevin occupied for a long time. Of course, my husband had to climb every bump and photograph every rock!
About 50m below the summit we came across a fence, but Kevin spotted a gate nearby. The area around the gate is very wet and squelchy, but once on the rocky bumps, the fun can begin again!
Fence: 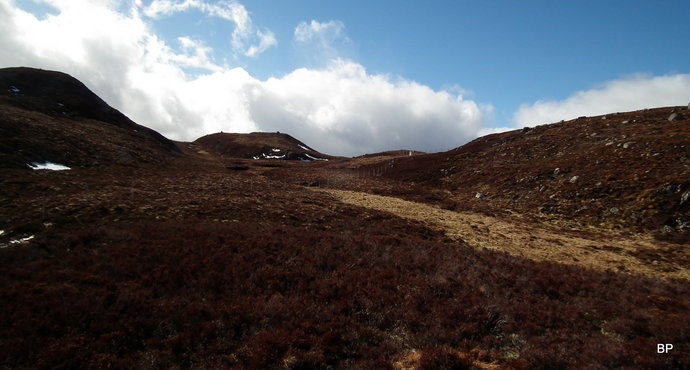 Another shower passing by:

Across the trench of Conagleann, the vertical face of Beinn Dubhcharaid:

It's a Sub with views worthy of a Munro! Such a shame so few people realize how superb this landscape is. Corbett baggers come here to take the long walk (or cycle) to Carn na Saobhaidhe, which itself is a BHL (boring heathery lump) with a bulldozed track almost all the way to the summit. This little hill gave us 10 times the entertainment yet it's virtually unknown!
Loch Conagleann from above: 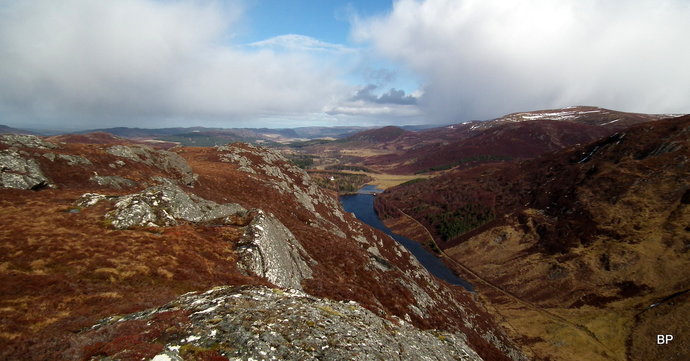 The summit in sight:

On the way to the summit bump, we met a confused hare - still in its winter fur 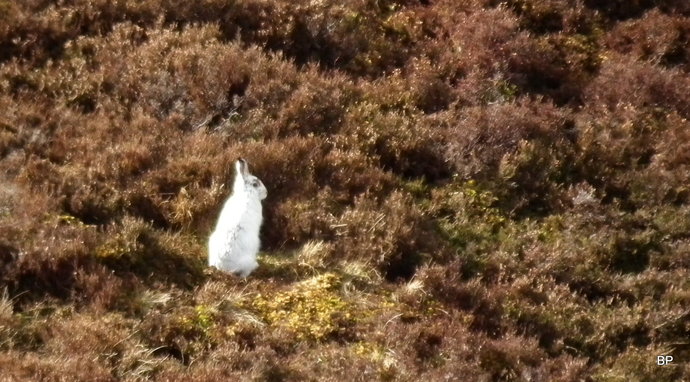 The summit has a cairn, which proves that somebody must have climbed this hill before us, if only a handful of dedicated Marylin baggers 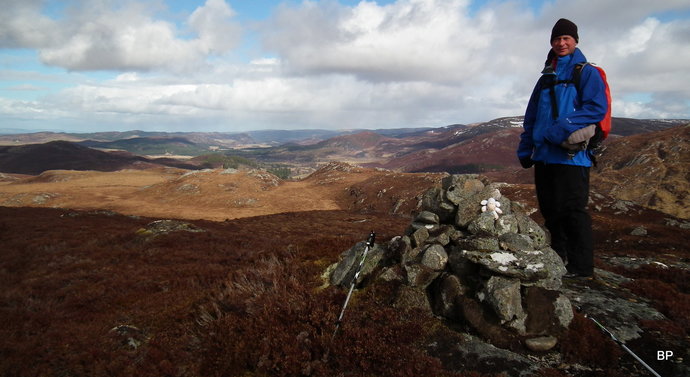 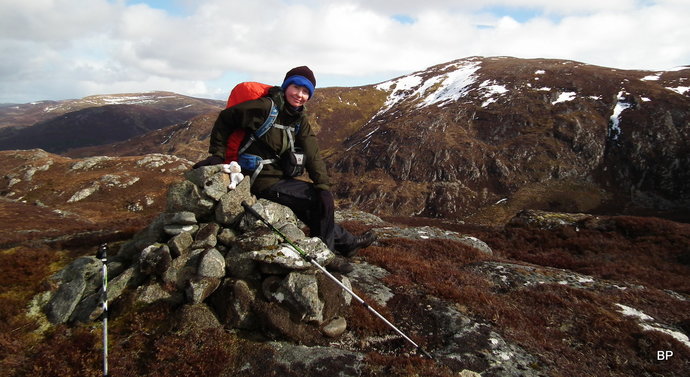 Now to the views. It's an extraordinary viewpoint and even with 5 min showers passing over us all the time, we really appreciated the beauty of this area. To the east, Loch Farraline and Loch Mhor:

The way we came, all the lumps and bumps plus a bonus rainbow:

Diving in the heather, looking for a good photo:

We hid behind a large rock as it was quite windy on the top, and enjoyed our tea and cookies, before packing up and descending south along the ridge. After initial heathery section, we picked a faint ATV track which led us down to a gate in the fence and to the main track through the trench of Conagleann. Another metal gate led onto the track and into the narrow passage between Creag a'Chliabhain and Beinn Dubhcharaid:

Weather has improved, the last of the passing showers died out and the sun came out, making our return walk a pure pleasure! The eastern face of Creag a'Chliabhain is amazing 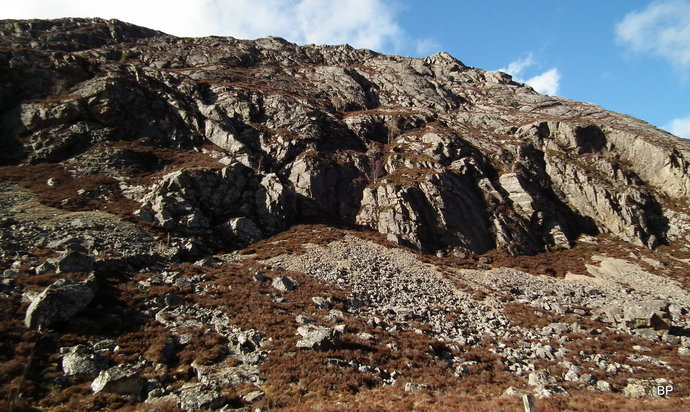 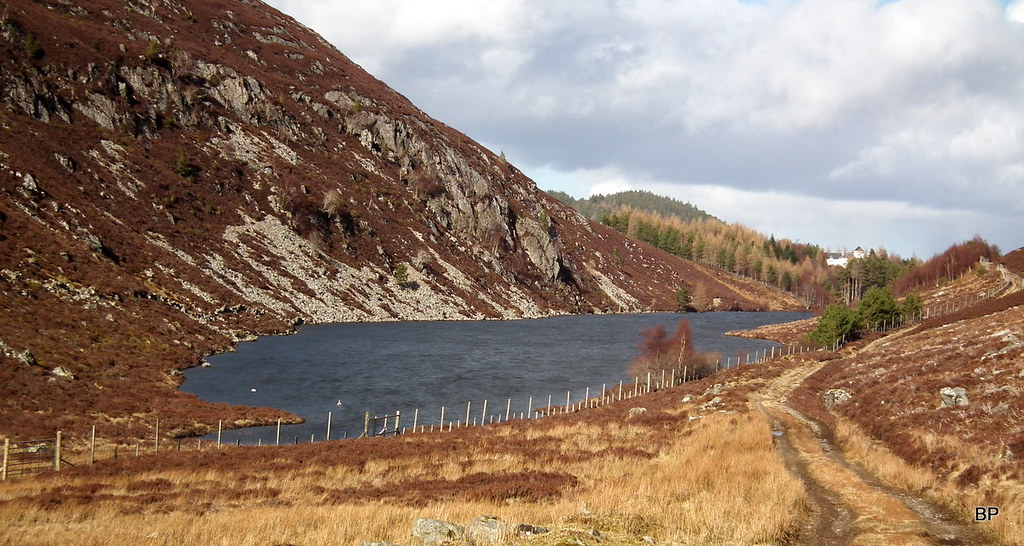 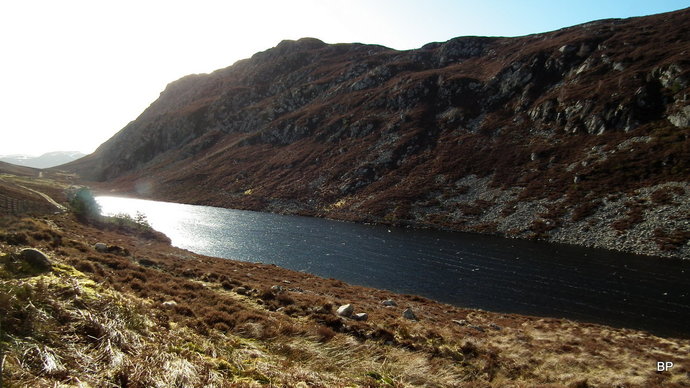 We were really pleased with this walk, might just be a couple of Subs but a very entertaining route, especially the second hill. It is, of course, the land that hillwalkers forgot, so we didn't see a single soul all day. On the other hand, we observed wildlife on every step of the way. Birds of all shapes and sizes, from buzzards and red kites to swans and ducks, red squirrels, hares, rabbits, deer, you name it, the area was steaming with all creatures great and small. And it was surprisingly quiet. I don't know if the windfarm construction up the track is still going on. It was Saturday so maybe the workers were off for the weekend. But regardless, it's a lovely area to explore, a pleasant surprise to all who think that Sub climbing is a pointless exercise.
.....................
My next story will continue our quest of visiting lower hills with great ridges - an obscure Graham this time. TR to come soon.

Re: Dunmaglass: the land that hillwalkers forgot

I've not done any of the sub 2000s in this area, but they look pretty good and quite rugged too. Definitely somewhere I need to visit at some point this year.

Re: Dunmaglass: the land that hillwalkers forgot

That Beinn Dubbything looks rather rugged. Always good to explore the less well known places like this.