Magic inversion in the Arrochar Alps

Magic inversion in the Arrochar Alps


It was probably the warmest day of the year so far, or the constant cold had finally toughened me up . Setting off from the car park to climb Beinn Ime and Beinn Narnain it was a pleasant walk through the woods, even if the mist and low fog stopped any long distance views, but with the met office promise

, that the fog would lift by early afternoon, my hopes were high for some views later on. Once we were out of the forest my joy of walking on solid group was short lived when the path had turned into a slushy mess of snow and walking got quite arduous. 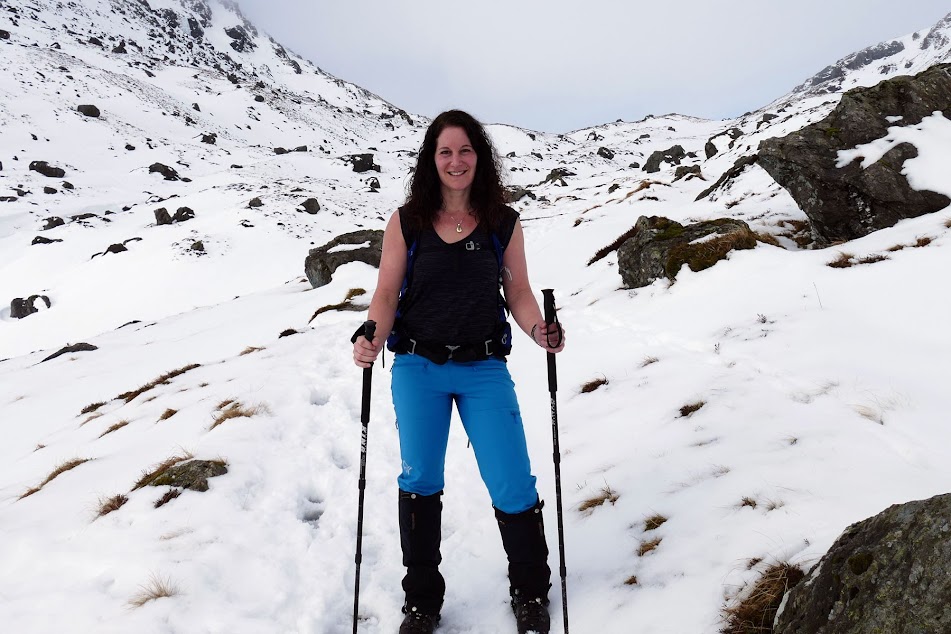 Did not expect that my first time in a T-shirt this year, would be in snowy surroundings 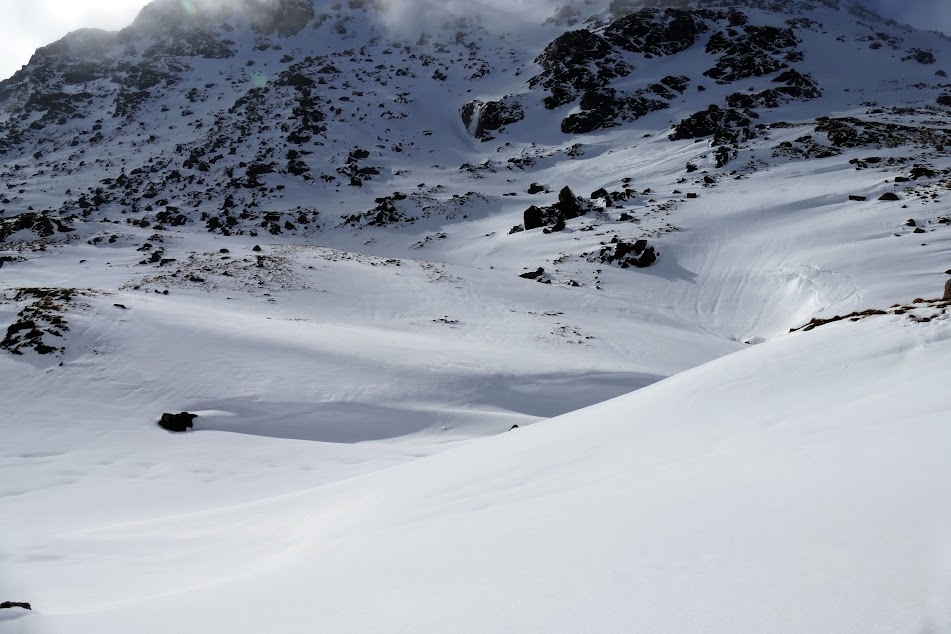 Snowy wonderland with all the snow from the previous week 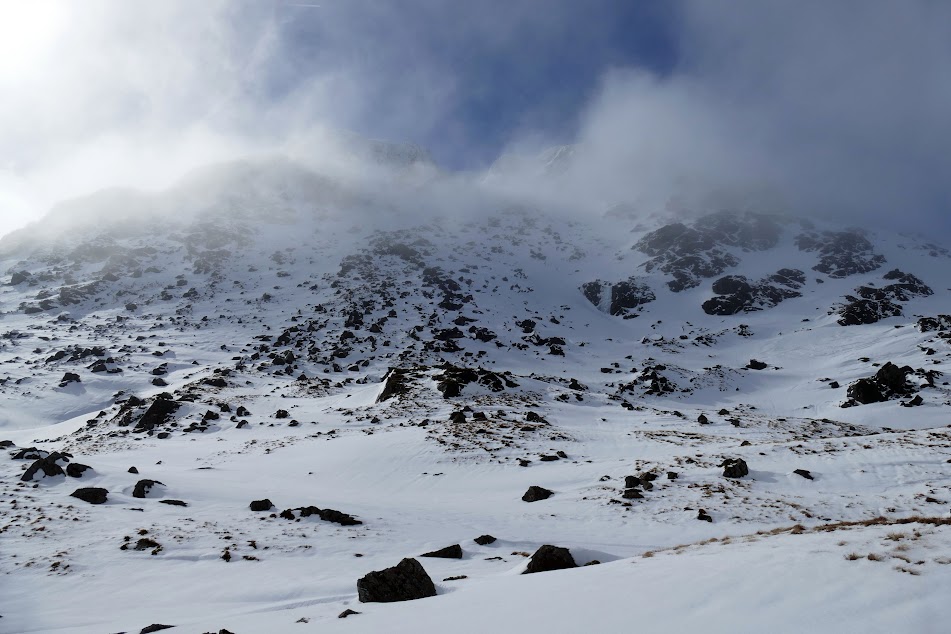 The side of the Cobbler still hidden in clouds

Passing the Cobbler on our left, we continued until the path forked right and started the long slog up Beinn Ime. Apart from improving the visibility was getting worse the higher we climbed and my hope of getting any views at all, were close to zero.

Continuing up the hill we were overtaken by a few fell runners, who in trainers!

were flying by us up the hill. I will never be a fell runner, nor did I ever wanted to start running up hills, but the guys who do it (even though I think they are nuts

) have always earned my respect.

The slog continued and at the 900m mark it seemed to get slightly brighter.

Excited I looked around me..could we be in for an inversion? A few meters later we stepped out of the cloud and into bright sunlight and a sea of clouds around us. It was simply amazing. 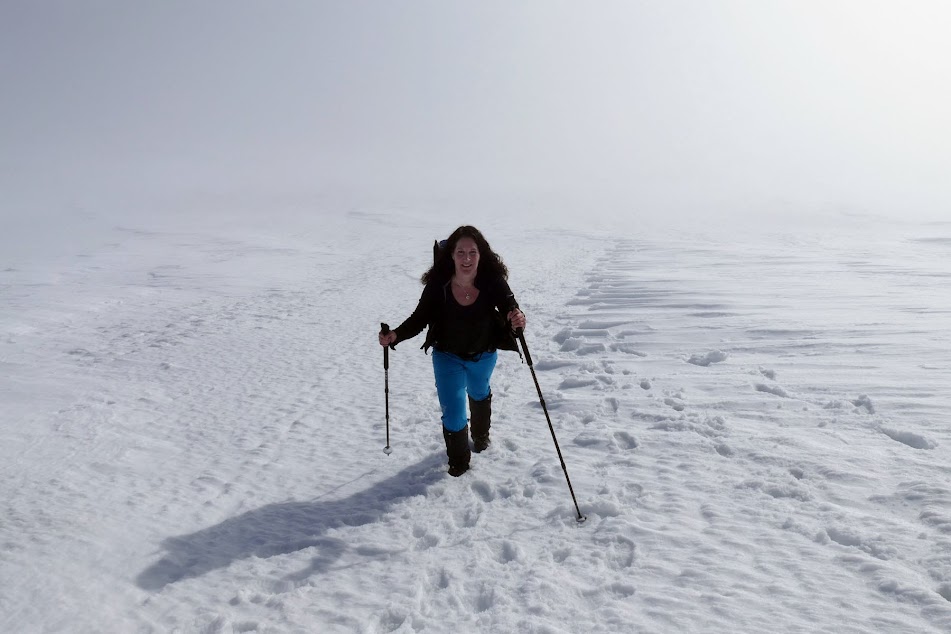 On the way up Beinn Ime 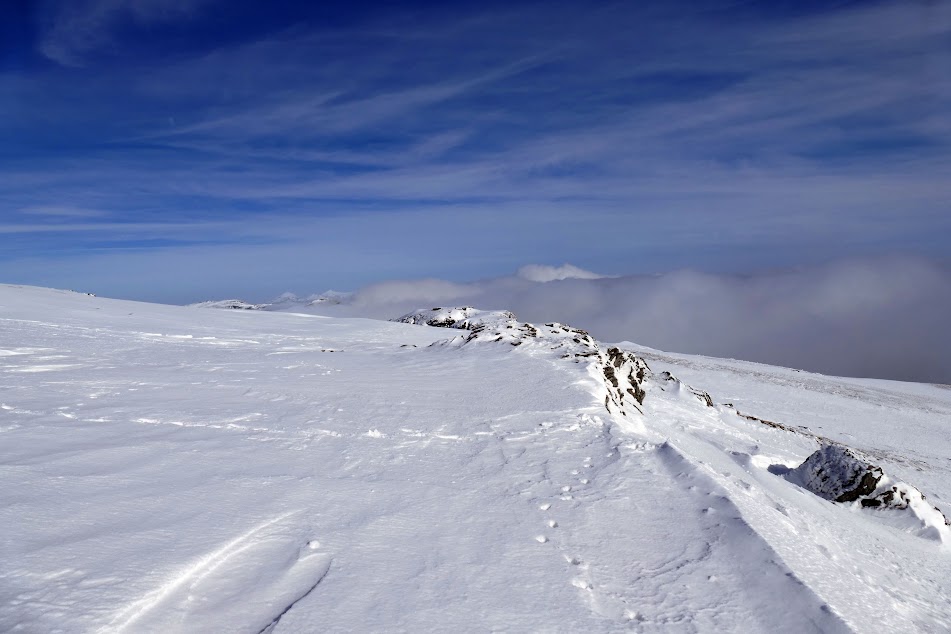 Just out of the clouds 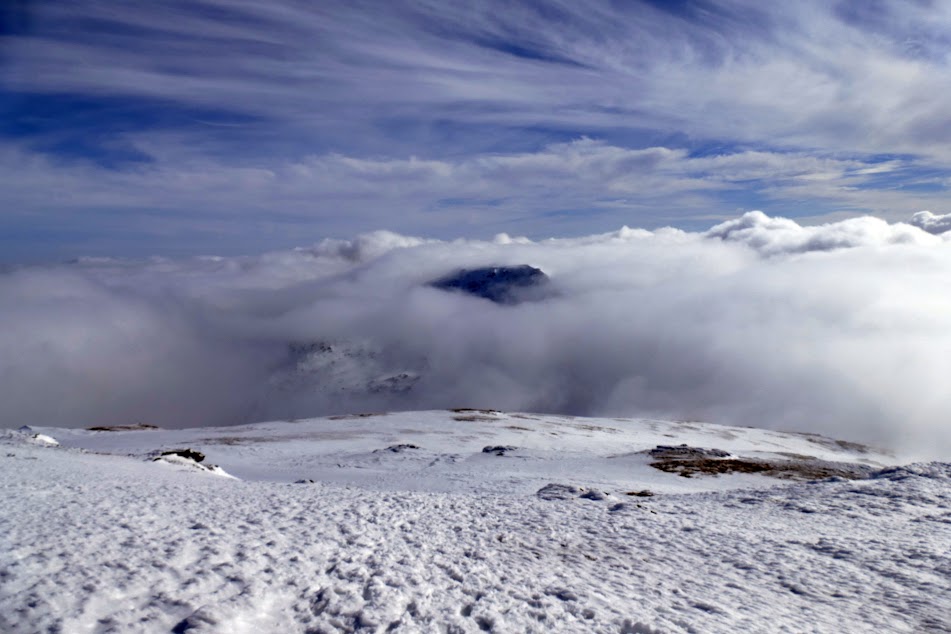 Beinn Narnain peaking out if the clouds 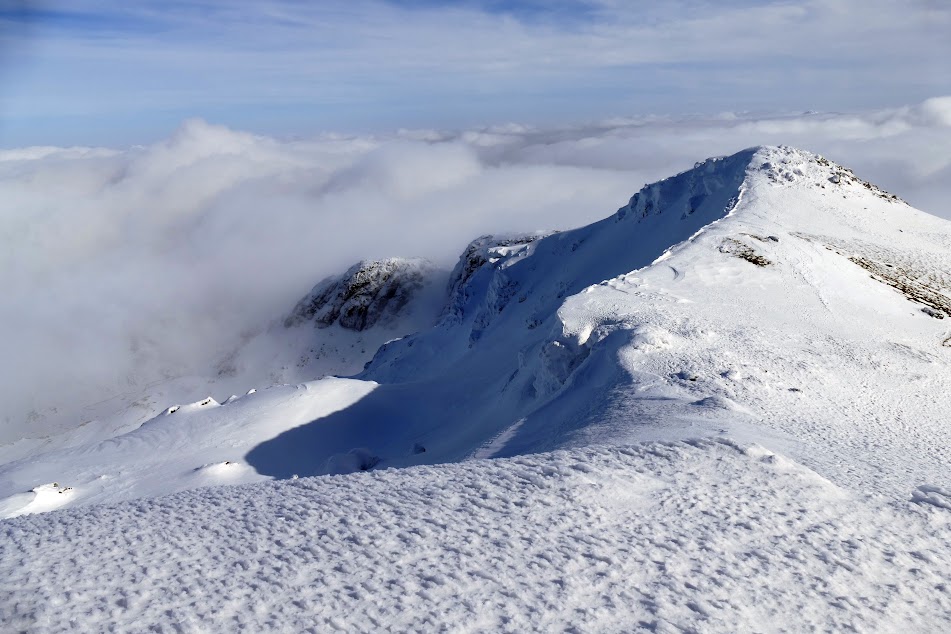 The other side of Beinn Ime 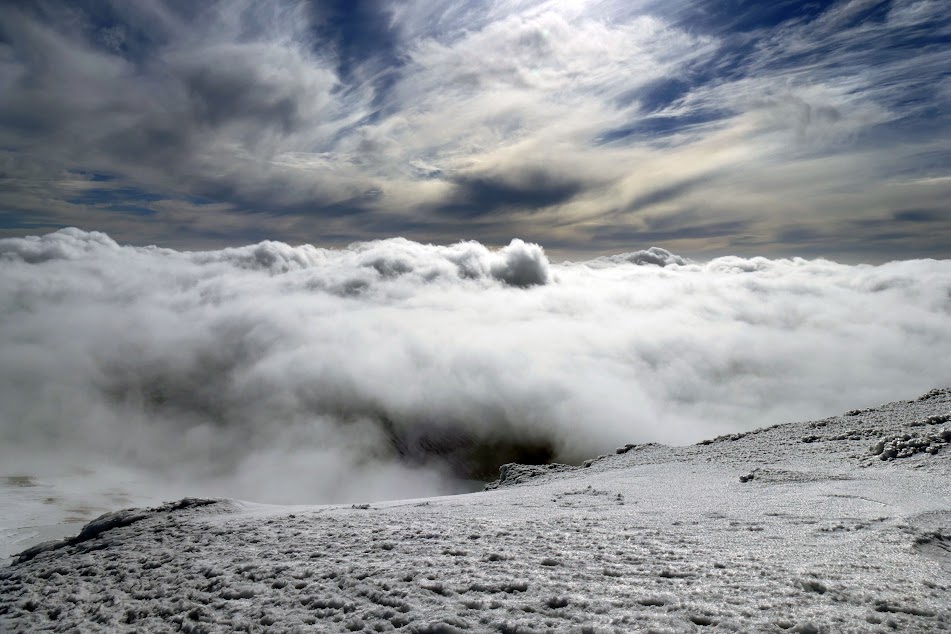 
Stooping every few meters to take the views in, we finally reached the summit cairn and greeted by some other hill walkers who had arrived before us and were equally happy to share the cloud spectacle around us. We rested for a long time and watched the top of Beinn Narnain appear and disappear below the blanket of clouds around it. Kevin had to drag me away as I could have happily stayed for another hour, but the wind had sneakily started to pick up and the clouds above us were thickening, indicating worse weather to come. 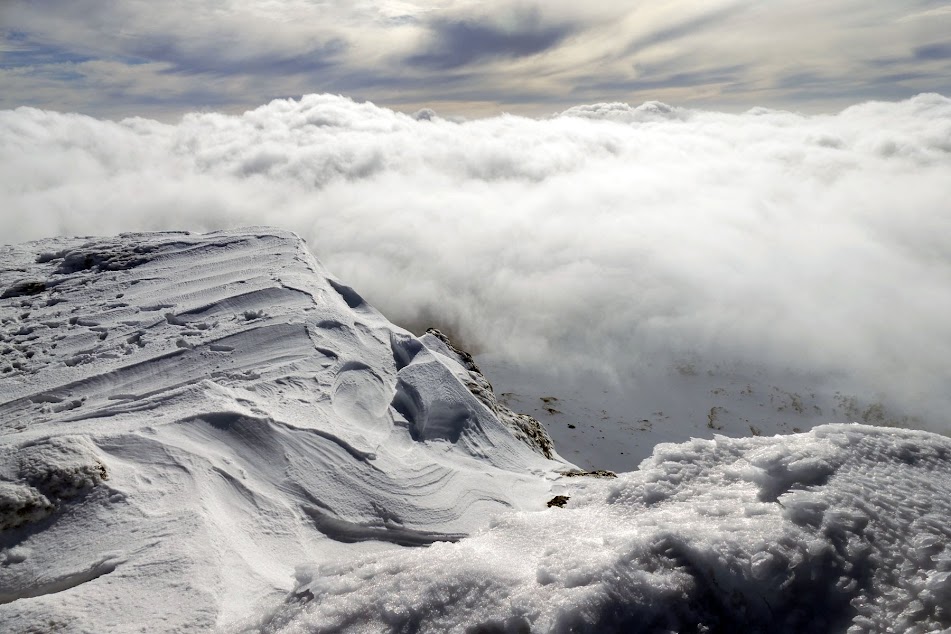 The clouds are thickening 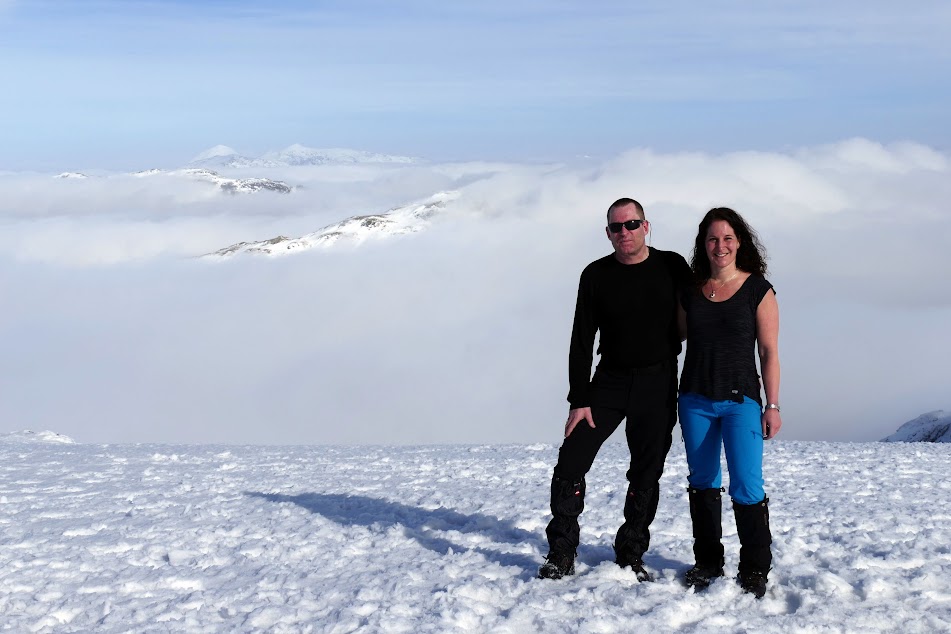 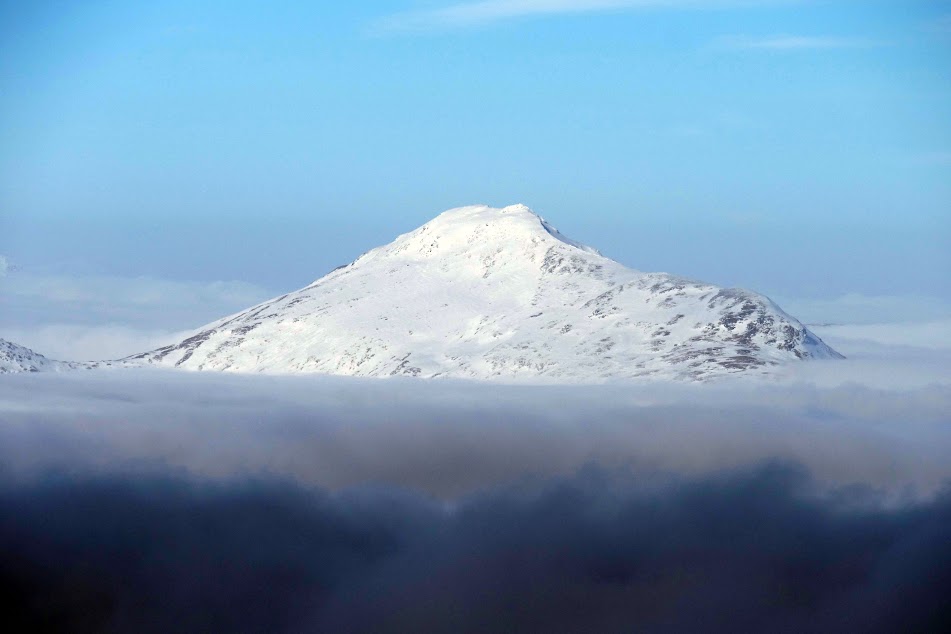 Ben Lomond in the distance 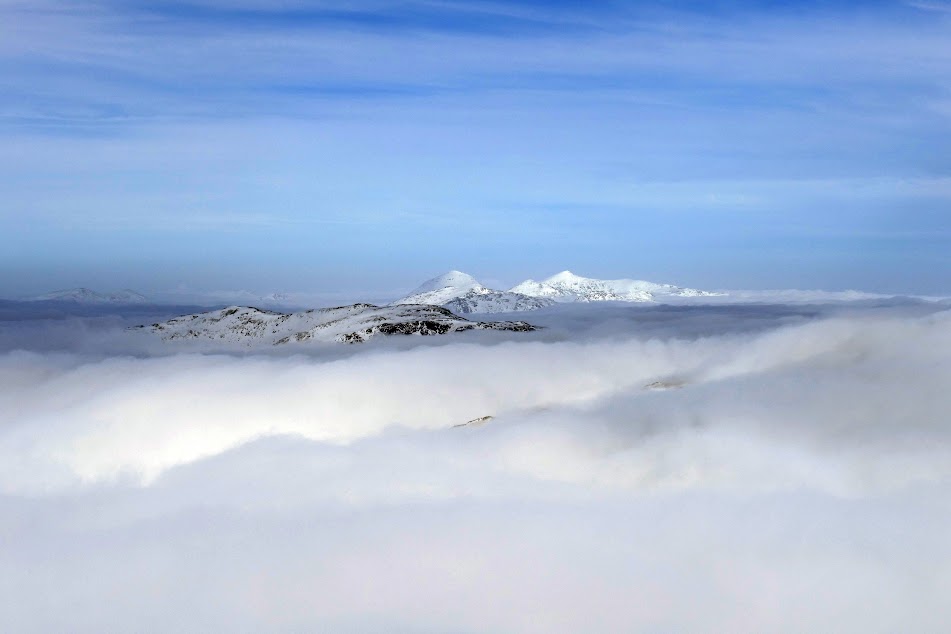 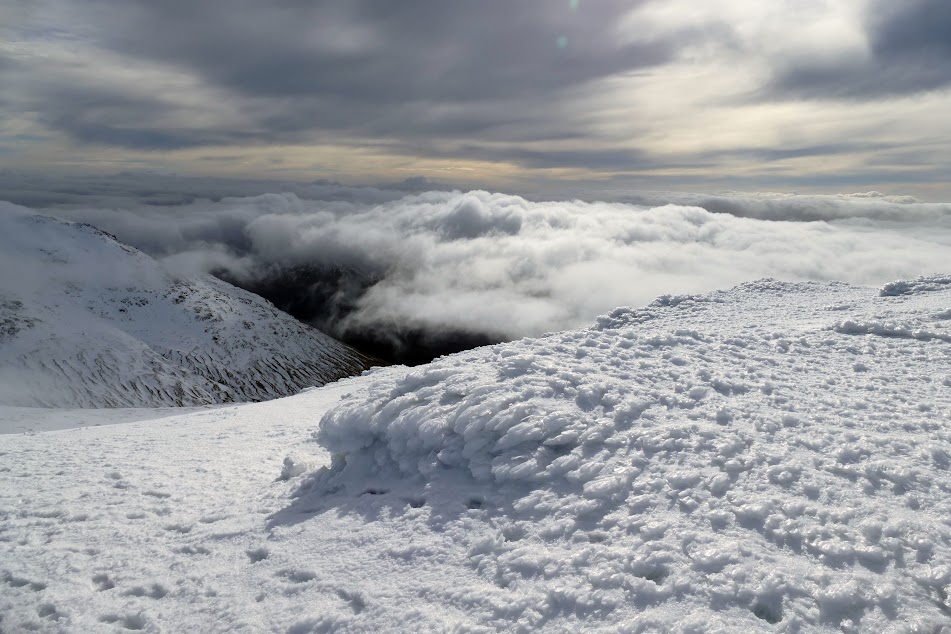 When we entered the thick cloud on the lower sloped again, the wind had brought the cold and with it the winter layers were back on. We retraced our steps and once we reached the bottom, started the steep climb up Beinn Narnain. It was relentlessly steep, but in comparison to the first Munro a short climb. The clouds seem to get even thicker and by the time we reached the summit cairn, there was hardly any visibility. Once we had taken some pictures, we discussed the way back down. 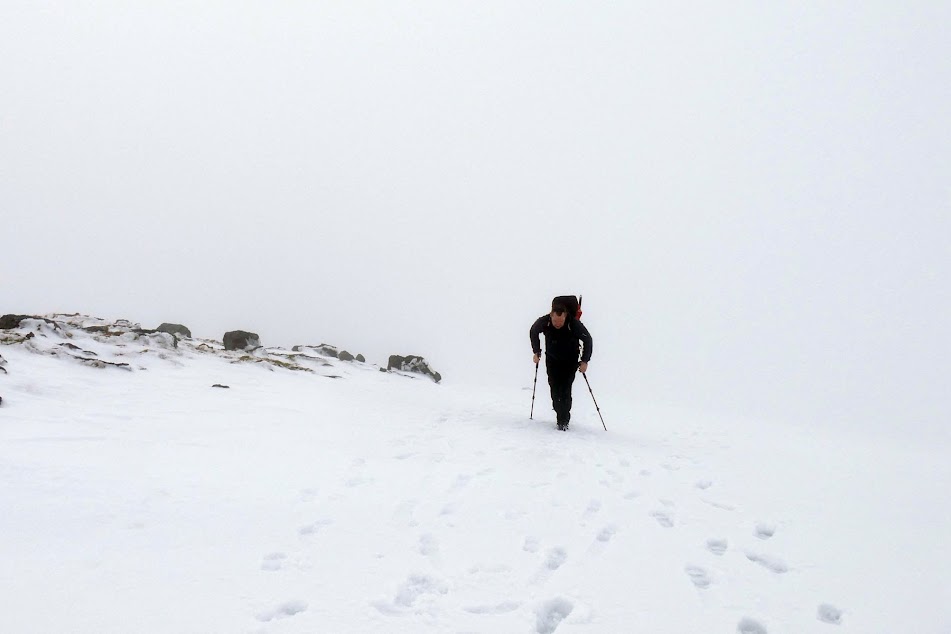 On the way towards Ben Narnain back in the clouds 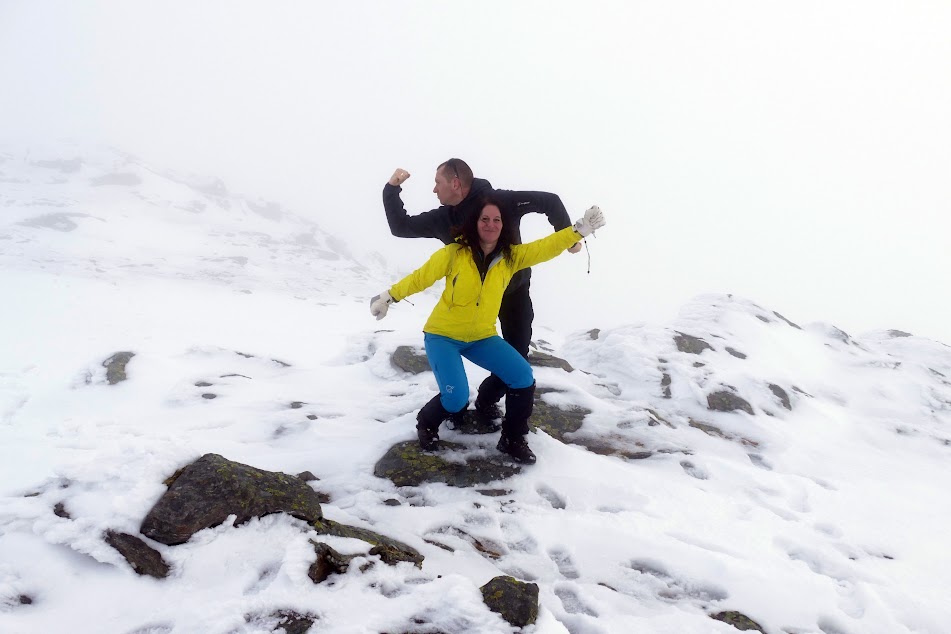 At the summit of Beinn Narnain....with no views we had to amuse ourselfs in other ways.

Even though I had climbed Beinn Narnain 7 years ago, I had missed the path back in the days and climbed A' Chrois on the way down, so I was not sure how the actually path would be like. As neither of us fancied the same way down we had come up, we decided to descent in the mist. Navigation once away from the ‘highway’ of foot prints we followed up, was quite difficult in the dense fog, specially as the path was covered under a thick layer of snow.

My GPS started also to play up by switching itself off every few minutes, which made navigation off this rugged mountain in hardly visibility rather interesting. I certainly felt rather apprehensive when reached the 'spear head' and looked down into the abyss. I could not see the bottom and the decent looked pretty challenging in the calf deep snow. On top of all I was getting worried about Kevin, as I certainly had not planned his first scramble down a Munro in deep snow, assisted by an ice axe, with hardly any visibility. I suggested a return the other way, but he was sure that as long I was leading the way, he would be OK, but I could see that he was a bit worried.
Discussing the best way down (backwards with kicking in steps, using the ice axe as an anchor) I lead the way. Around us the fog allowed only a few meters of visibility was eerie. Snow was falling off the rocks around us, making us look around nervously. With sweaty palms, not just from the heat we slowly made our way down the mountain, missing the path numerous times, but finding it again each time until much further down, we stepped out of the clouds, after what had felt an eternity. 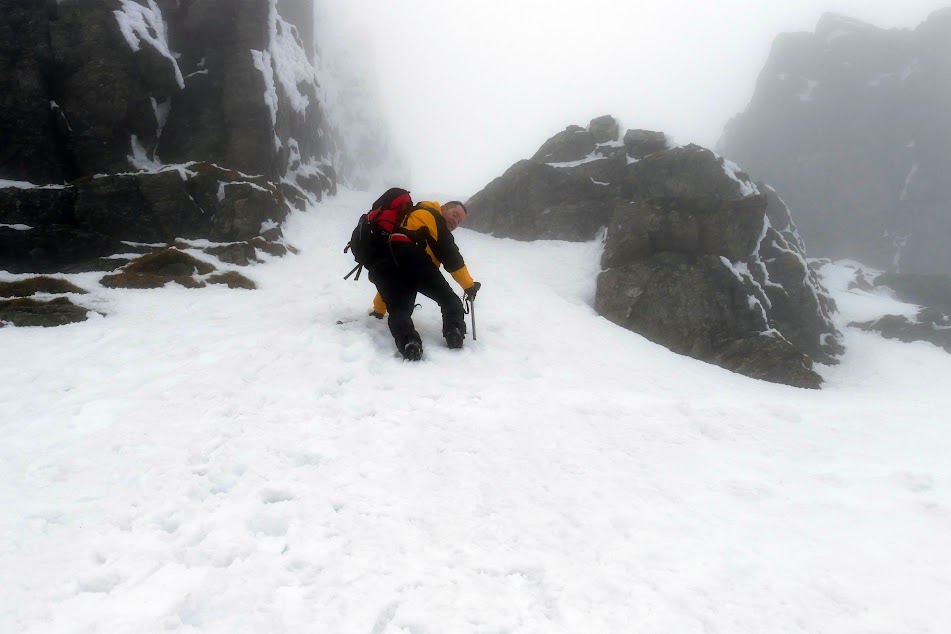 The way back down 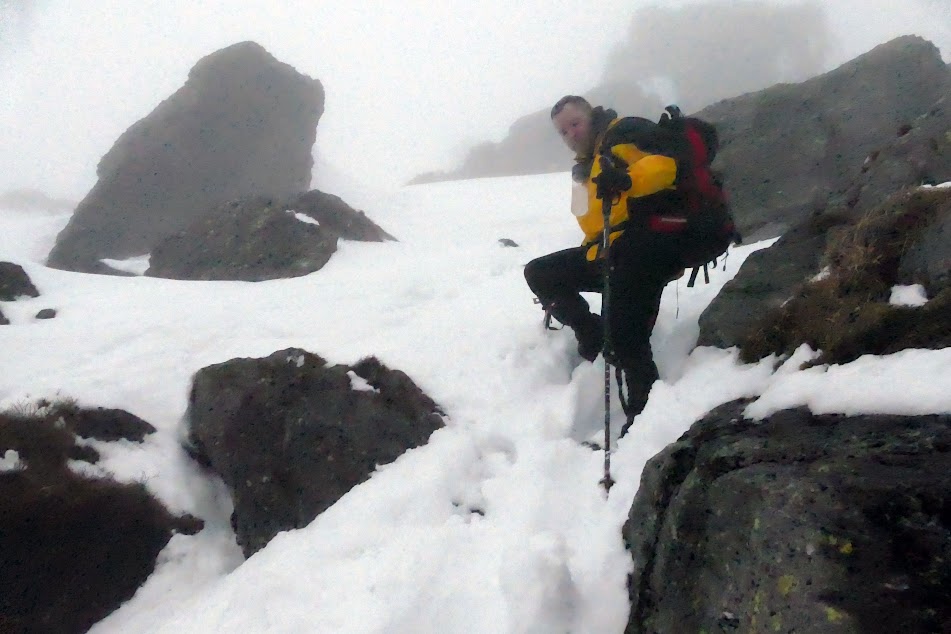 Not the easiest to navigate 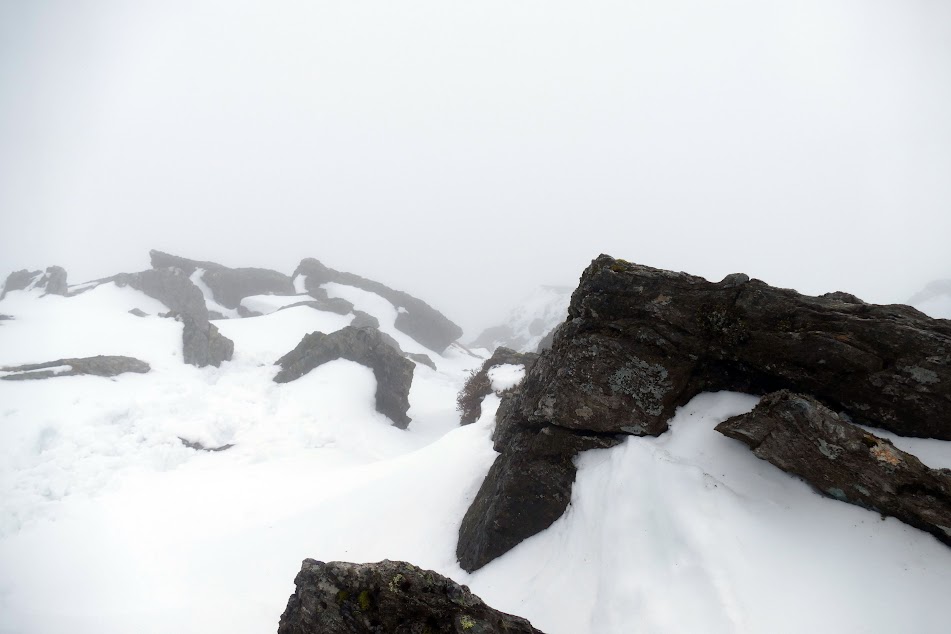 Where was the path again? 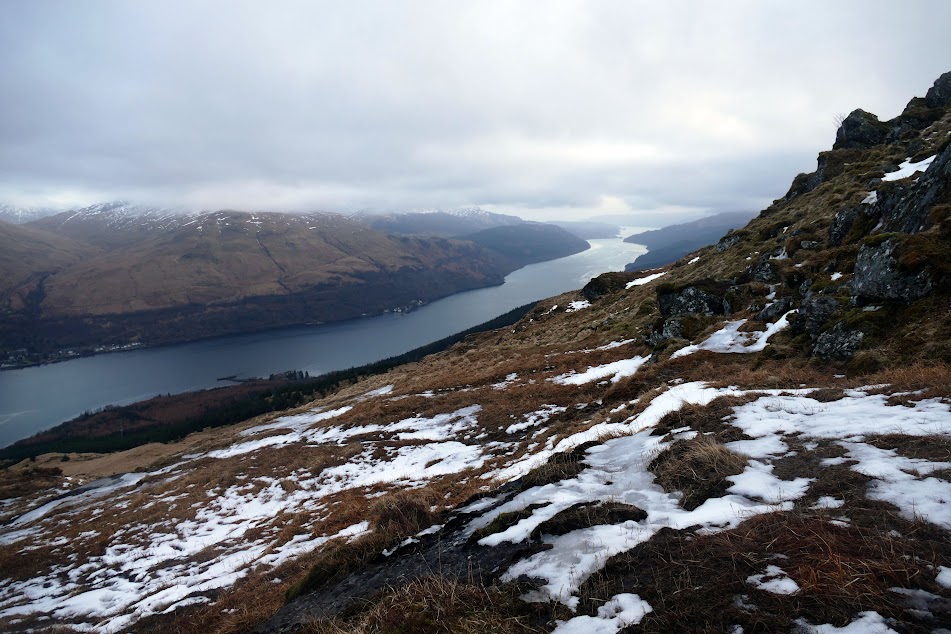 Out of the clouds and Loch Long in the distance

Oh the joys to be able to see again, even though we were still quite a distance away from the car. In the fading light after a long day we finally reached the car park again. What a day it had been and I was reminded how spectacular amazing the Arrochar Alps can be, specially in winter.

. Love it when you're not sure if you will see anything, then that happens

Wow, some stunning photos there. Glad to read that your anxious descent went well.

Excellent report - an inversion, especially when unexpected, is just so brilliant!

And some superb pics. I especially like "Simply magic" and "The clouds are thickening".

Hope it's like this later in the week (not what's forecast...

Some beautiful photos - What a cracking day.

Many thanks all for your comments! Had hoped for a repeat last weekend, when the weather forecast sounded similar, but was 'blessed' with a walk in the clag instead