An improving weather forecast mid-week persuaded me to hire a car for the weekend. As usual, just 2 days available, but about 20 different possibilities. After the forecast returned to the less pleasant weather that had been predicted further back, I decided on two day walks rather than a camping or bothying trip. One south one north. The Howgills had always appealed - they are where the scenery gets interesting when driving north up the M6. After finally getting hold of my car almost 40 minutes late on Saturday morning (the hire staff really do insist on showing you every last switch - yes, I know that's a handbrake

), I was on the road and driving into a strange gloom, but with odd suggestions of sunshine. By 11:30, I had parked up at the Cross Keys Inn and it was raining.


Howgills.gpx Open full screen  NB: Walkhighlands is not responsible for the accuracy of gpx files in users posts
At least the cloud was mostly above the summits. An easy walk into Cautley Spout waterfalls provided the best scenery of the day. Although the path was not obvious from afar, it led a well-stepped route right up the side of the falls, offering a good close-up. 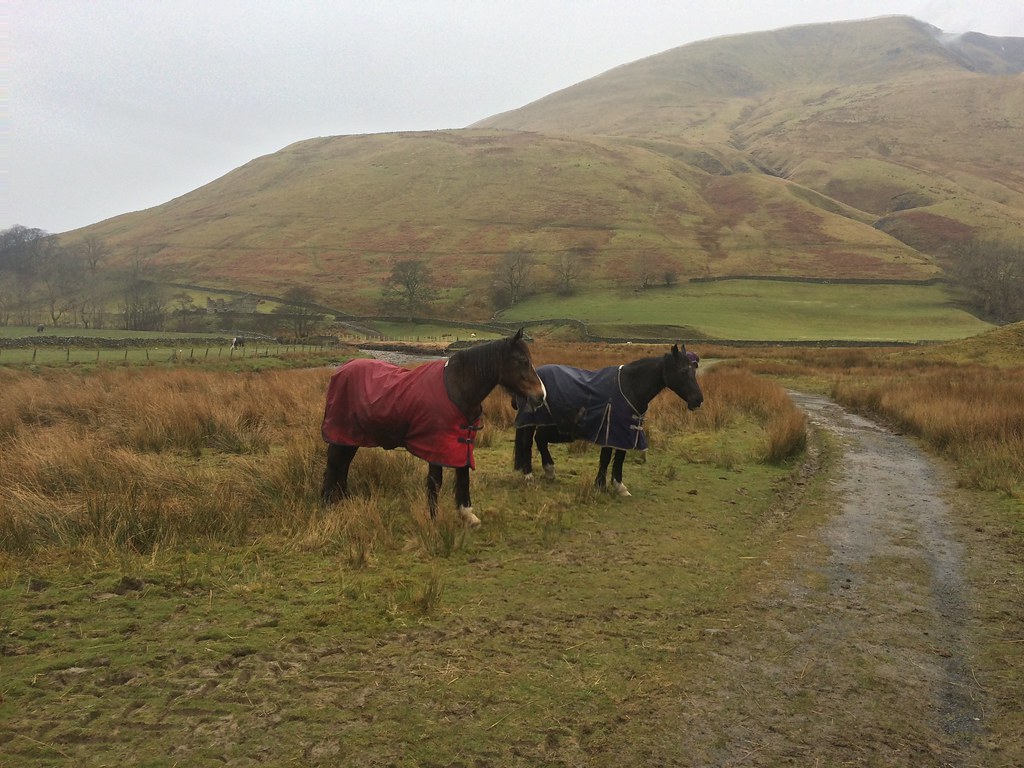 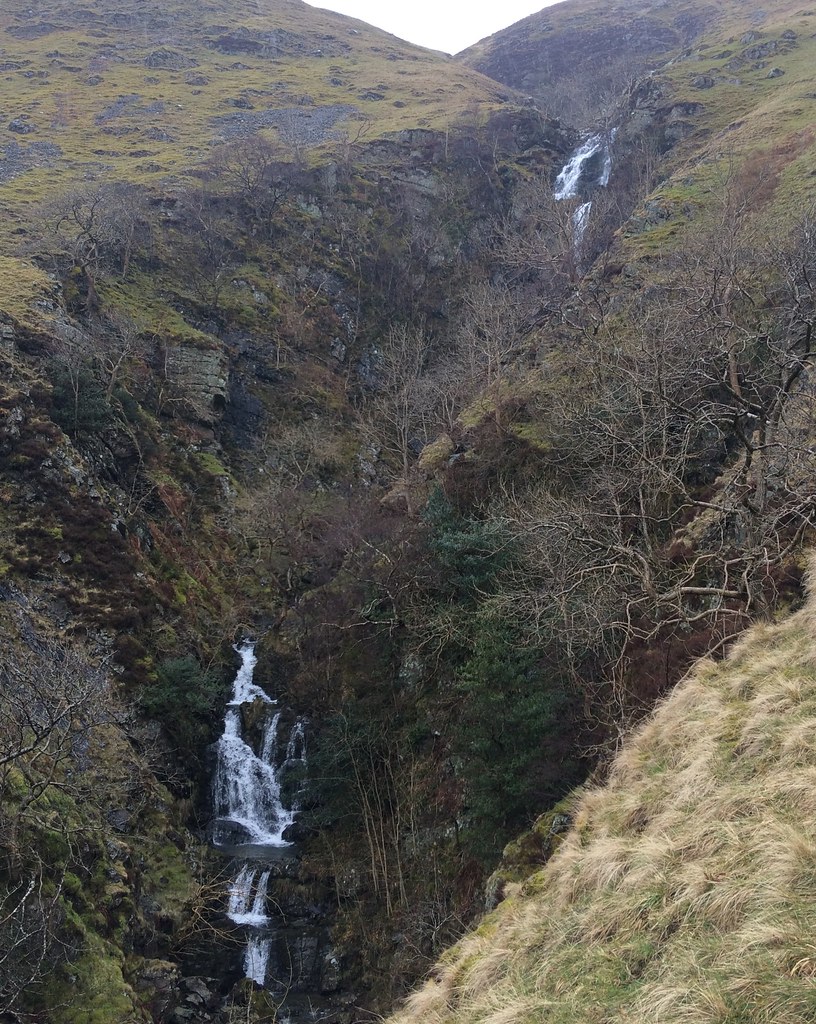 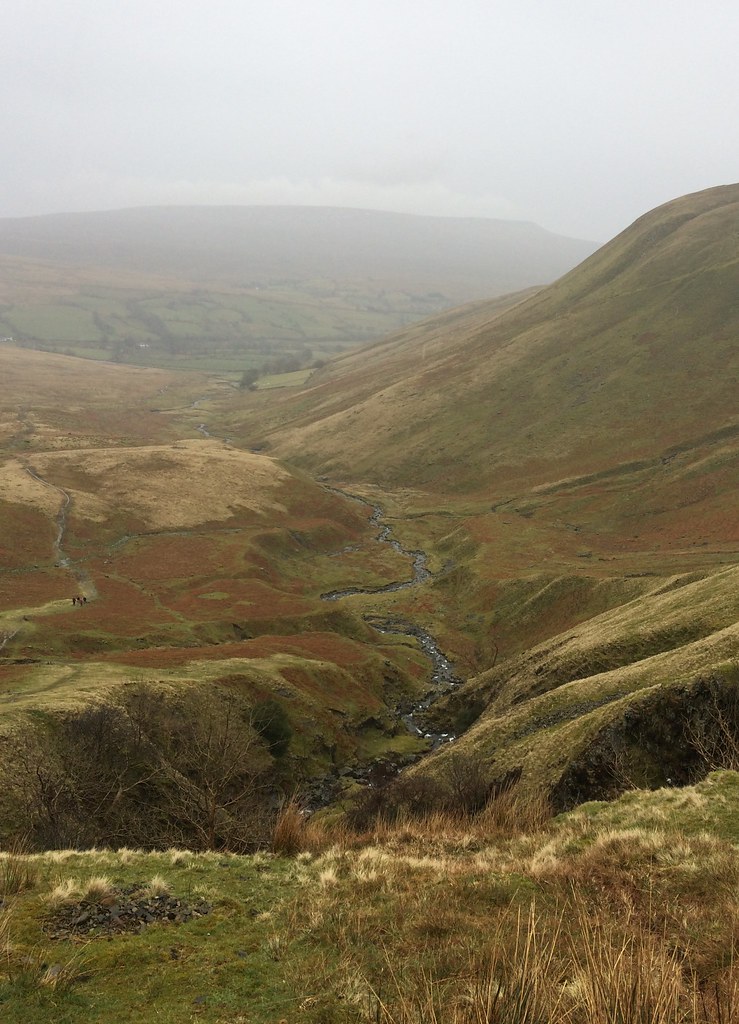 Back down Cautley Home Beck 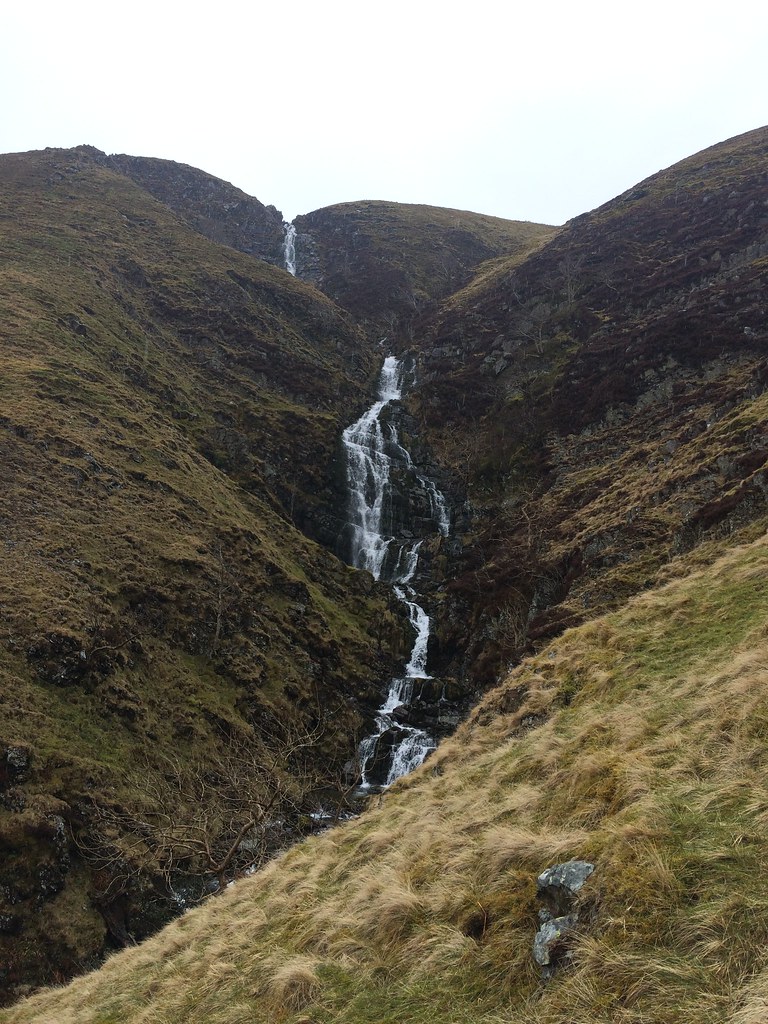 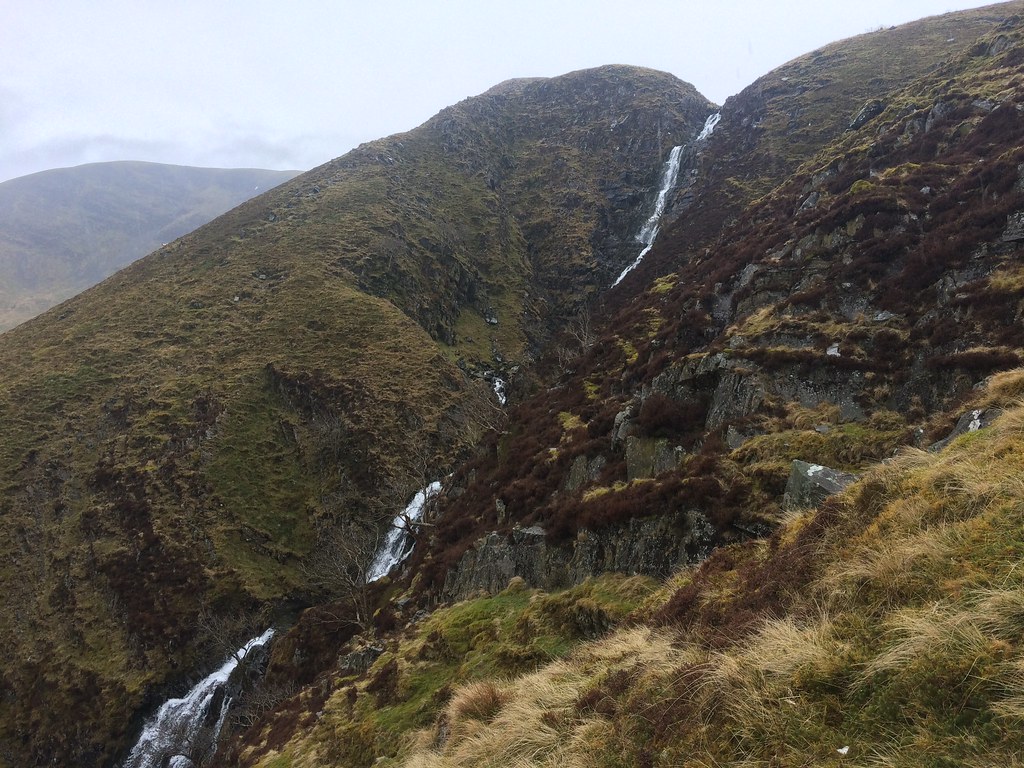 At the top, an easy crossing of Red Gill Beck was made, leading to a fainter path along the top of Cautley Crags. Very reminiscent of the waterfall and crags on Maesglasau in Mid Wales. 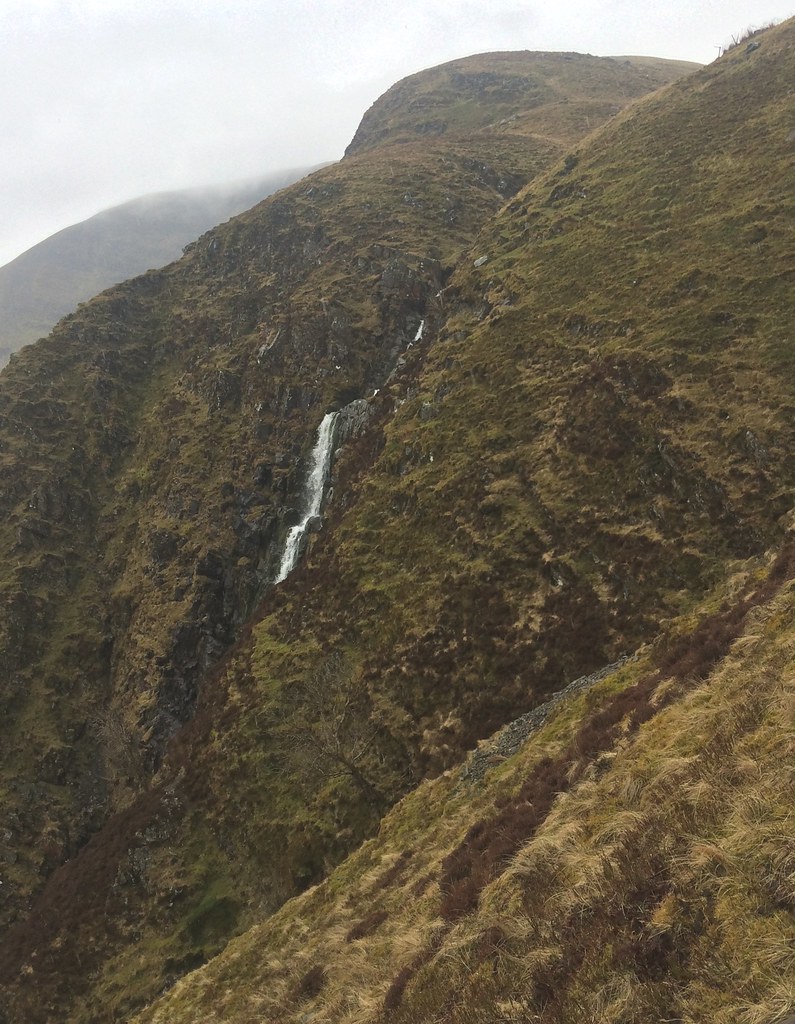 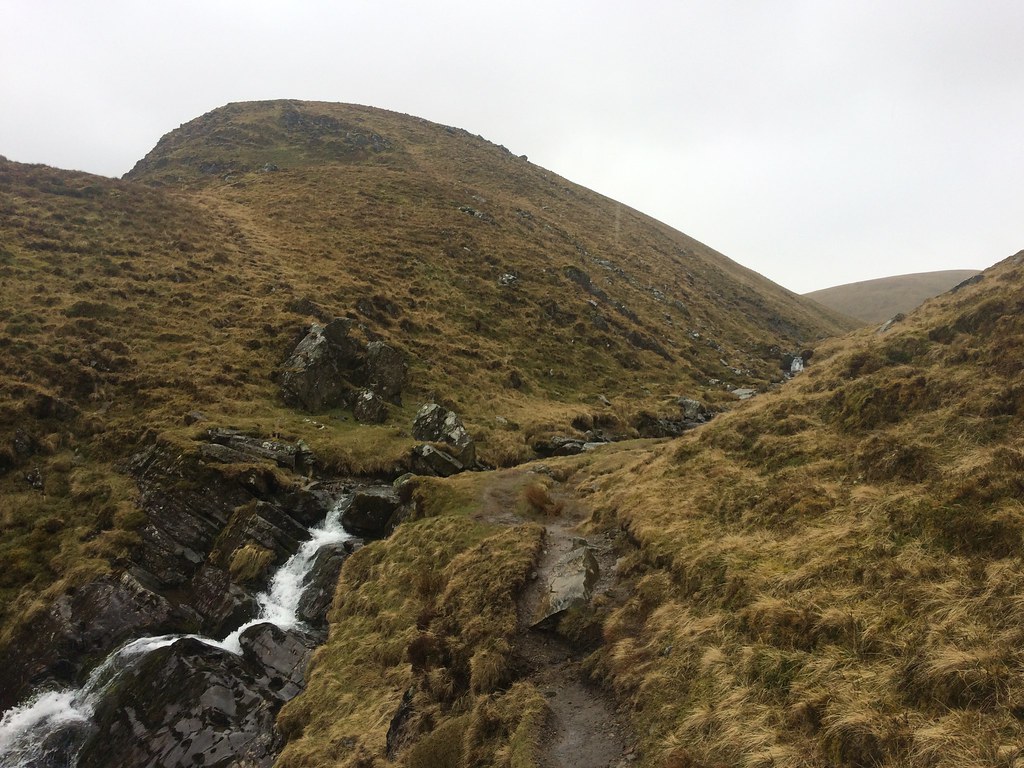 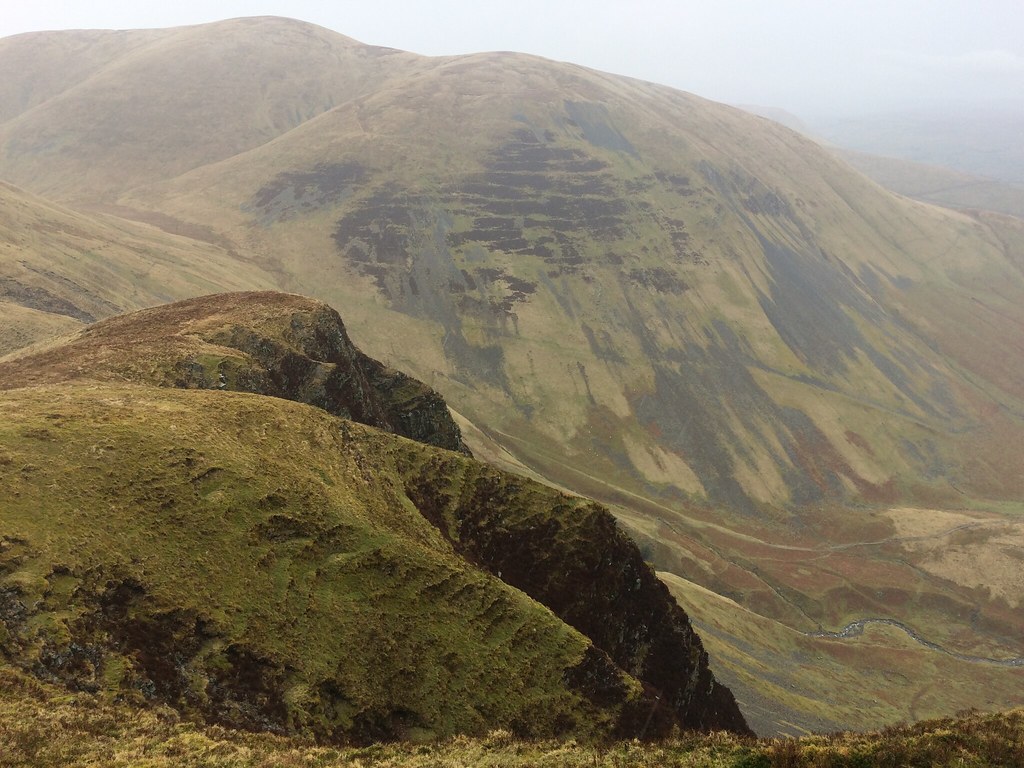 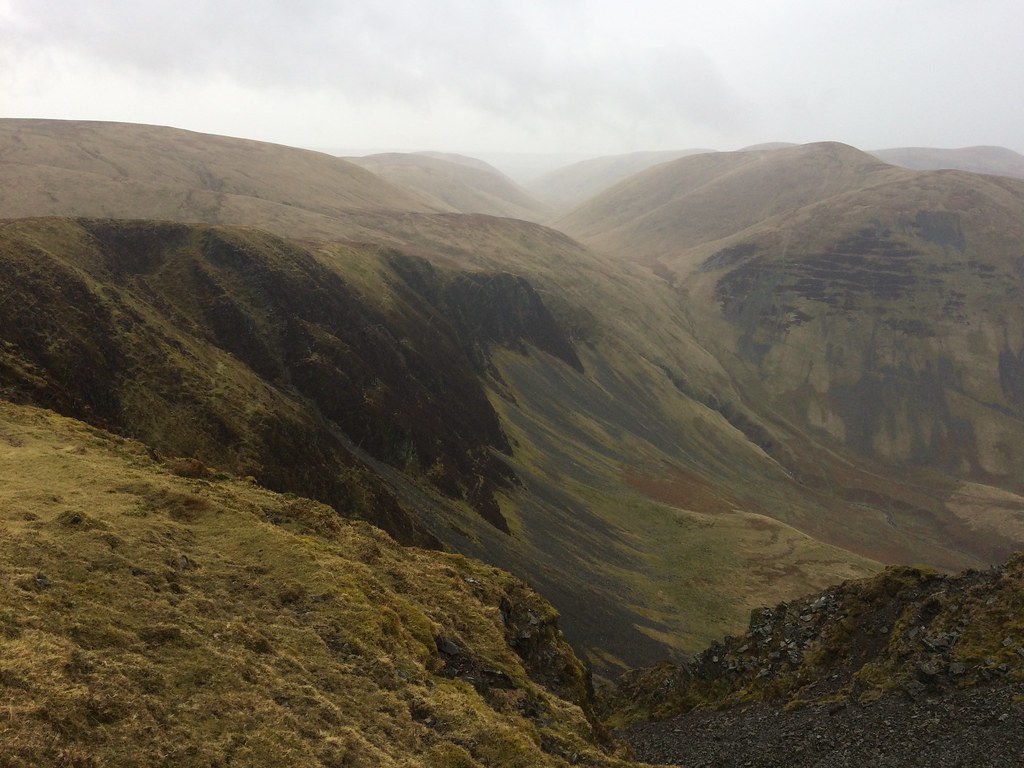 I was soon on the plateau of Great Dummacks, from which it was a short hop to Calders. Here I picked up a motorway of a path leading to The Calf - I hadn't realised that there were such big paths in the Howgills. I passed a few folk along here, and could see a few more in the distance. After reaching the trig point on The Calf, it was time to turn NW onto a grassier path. Fortunately the summits were clear, so although there were no long-range views, I was able to look down into the Lune Valley, where the M6 squeezes impressively through the steep-sided hills. Shame my photos weren't up to much either. 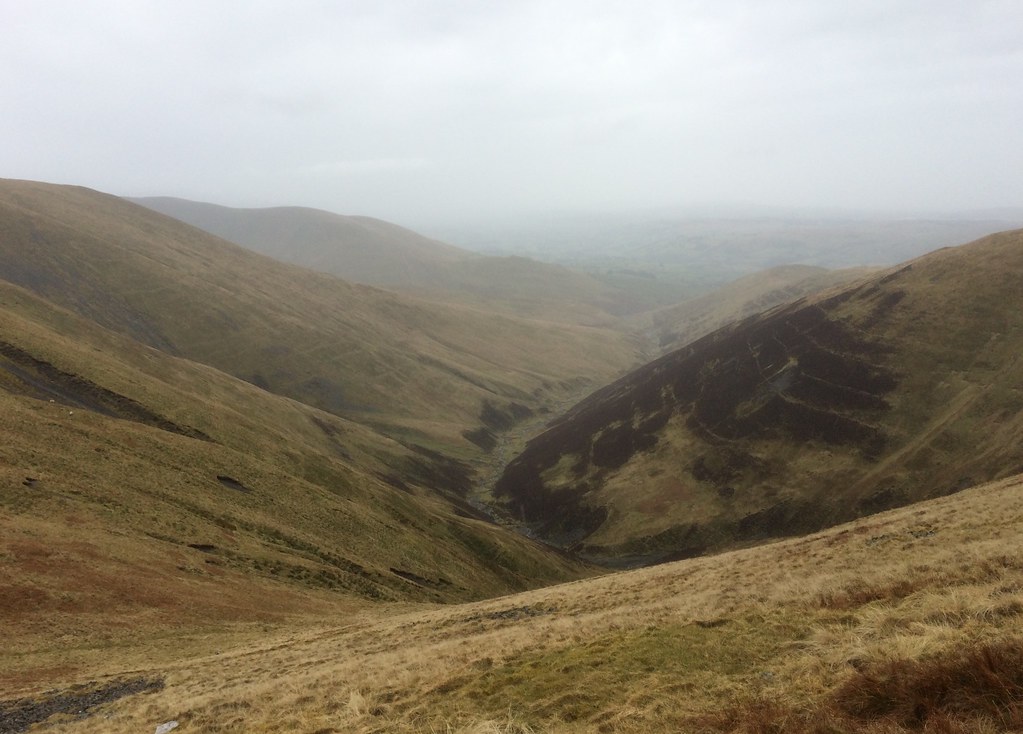 After a short steep section up to Fell Head, I retraced my steps a short way before continuing north towards Simon's Seat. I was originally going to go up this, but instead I decided to drop down exceedingly steep slopes into West Grain. Although it felt like the slopes were getting on for 45 degrees, the ground was firm and not slippery, so descending didn't take too long. My feet were soaking now, but this was down to the endless rain, the fact I was wearing shorts, and my my boots leaking. On the whole, I found the entire Howgills range to be pretty free of deep bog and difficult underfoot conditions, even if there was little in the way of rock. As many people have said before, it makes them a very distinctive hill range - although a bit bleak, they look very tidy with their steep sided valleys and long ridges.

I was now very cold, and counting on the crossing of the next ridge north of Hazelgill Knott to warm me up a bit. It did, and the rain also stopped, which was nice. 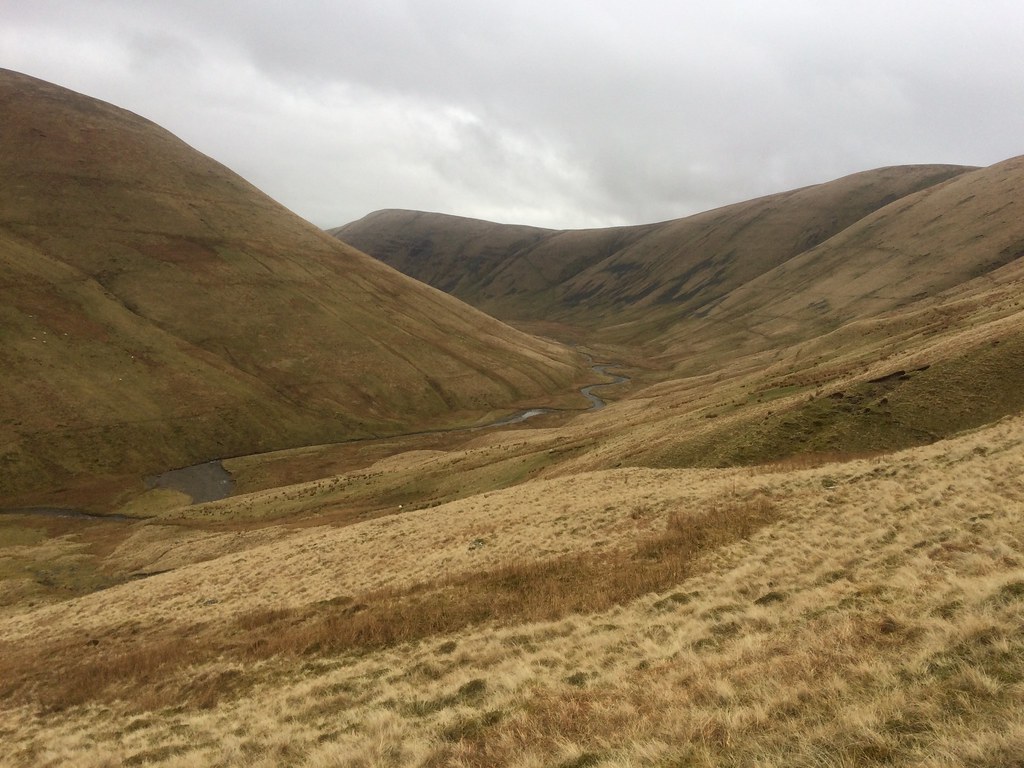 Langdale (not that one) 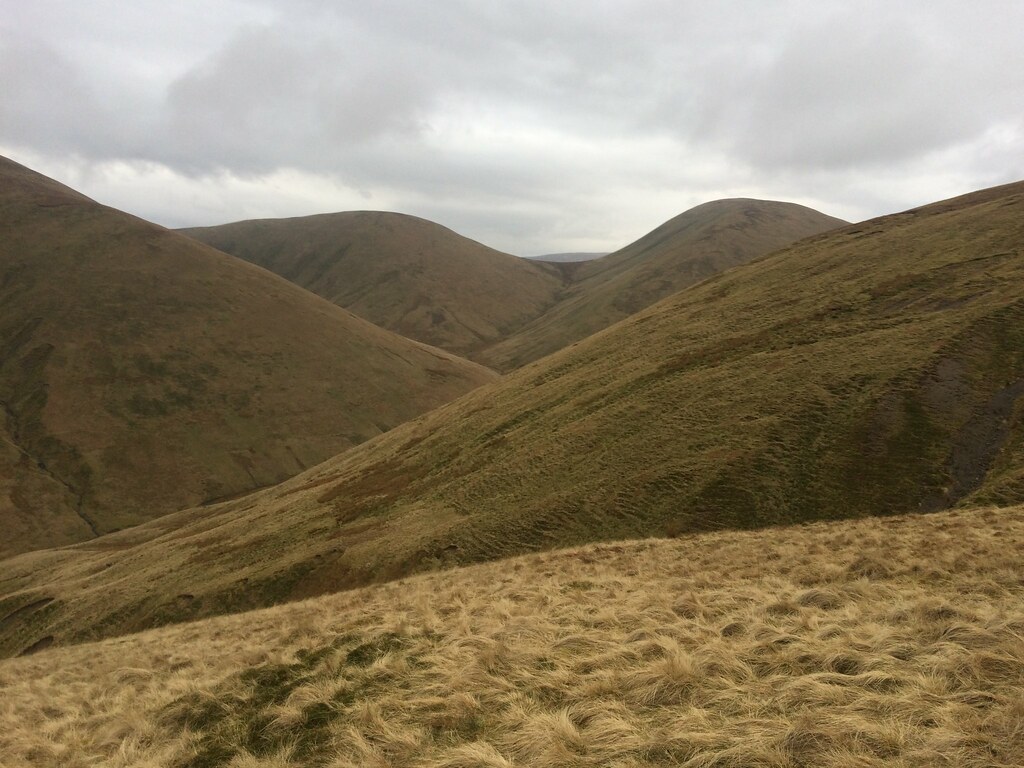 Another drop, not as steep as the previous one, led me into Bowderdale. Then it was straight back up again to reach Randygill Top. From here there were increasing views into the heart of the Yorkshire Dales, although it was still very grey and dull. 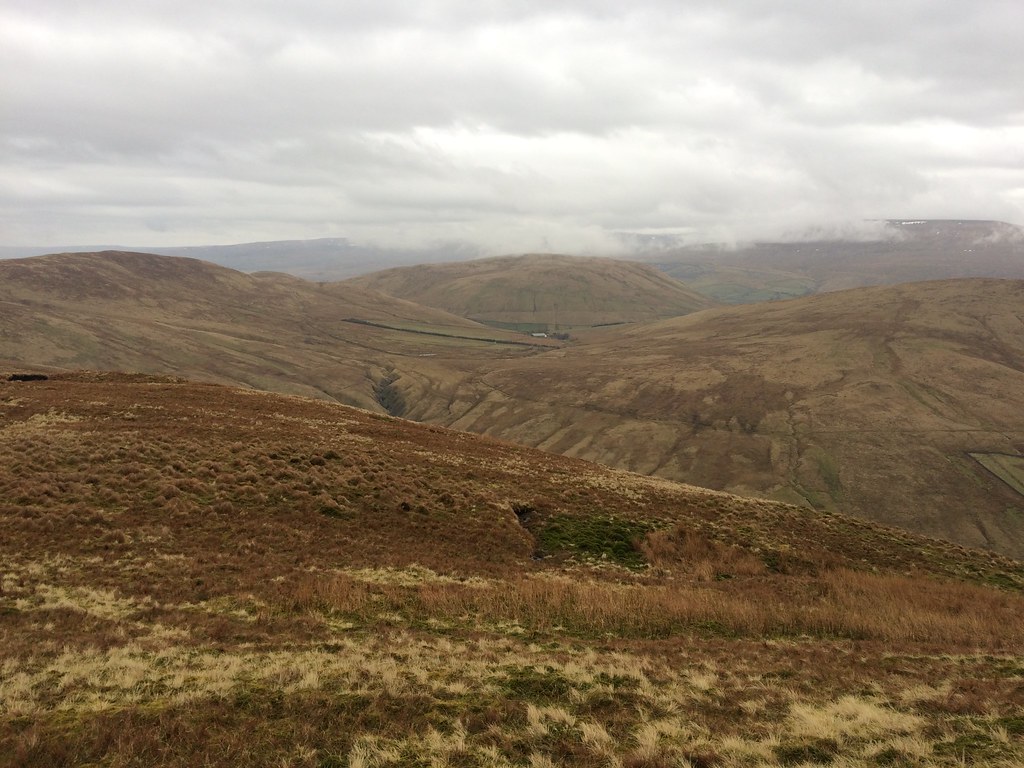 After a short lunch break, a quick traverse over the intervening top of Kensgriff took me to the steep final ascent of Yarlside. Again this was firm and easy going. On the other side, there were pleasant views again of Cautley Spout and crag, as I made a rapid descent back to my starting point. 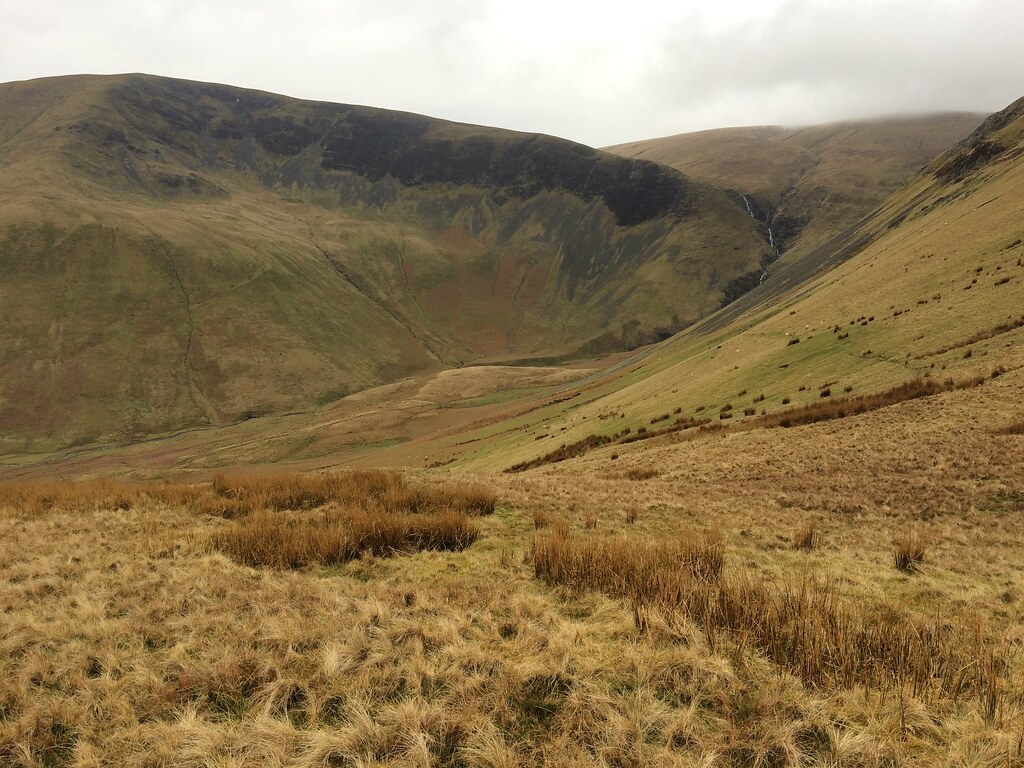 Cautley Crag and the waterfall 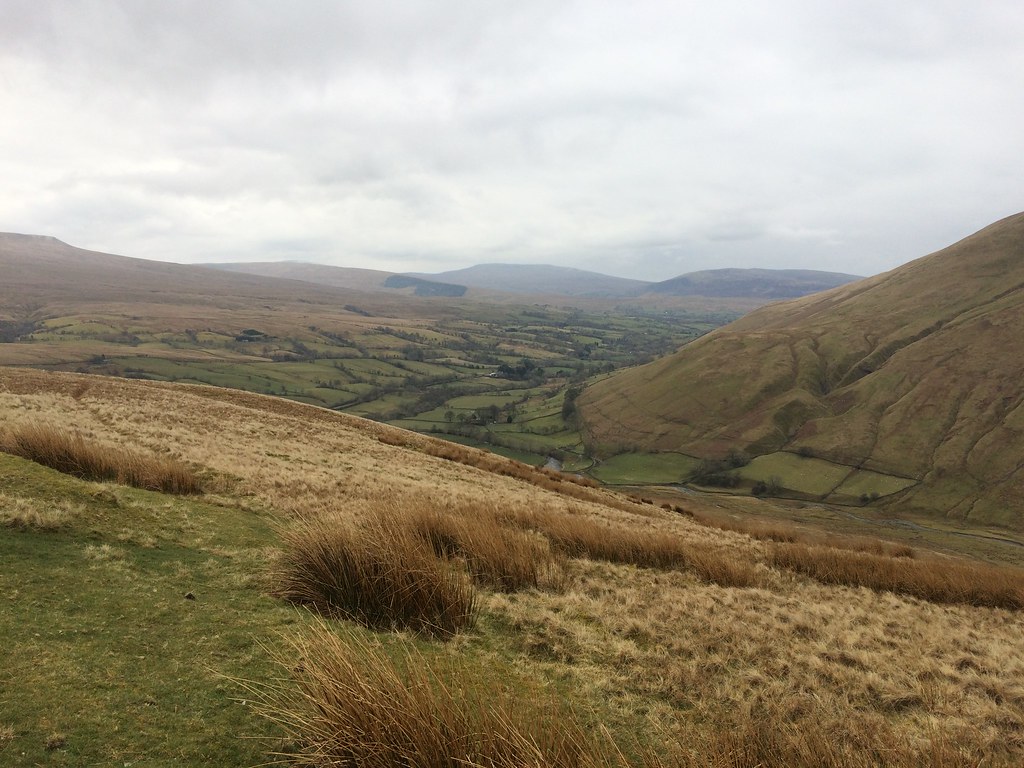 It was only 4:30 pm at the car, and there was plenty of daylight left. Although the weather wasn't marvellous, it had improved a bit over the afternoon. Having driven down this far, I fancied a small sample of some more typical Yorkshire Dales scenery. Although I've whizzed through in the car once, and also once on the train, I have never really walked anywhere in the National Park beyond a brief stop-off at Malham Cove. I had all sorts of possibilities in mind, but in the end, the closest seemed as good a bet as any. Odd, because Wild Boar Fell isn't even in Yorkshire (although my other summit, Swarth Fell, is partly).


WBF.gpx Open full screen  NB: Walkhighlands is not responsible for the accuracy of gpx files in users posts
I parked next to the railway bridge near the head of the Eden Valley and climbed a stile to reach the wet hillside. If the Howgills had been pretty dry, this was more typical Pennine terrain! Rather than running away from me, the sheep on the hillside gathered together and started following me, probably thinking I was here to feed them. 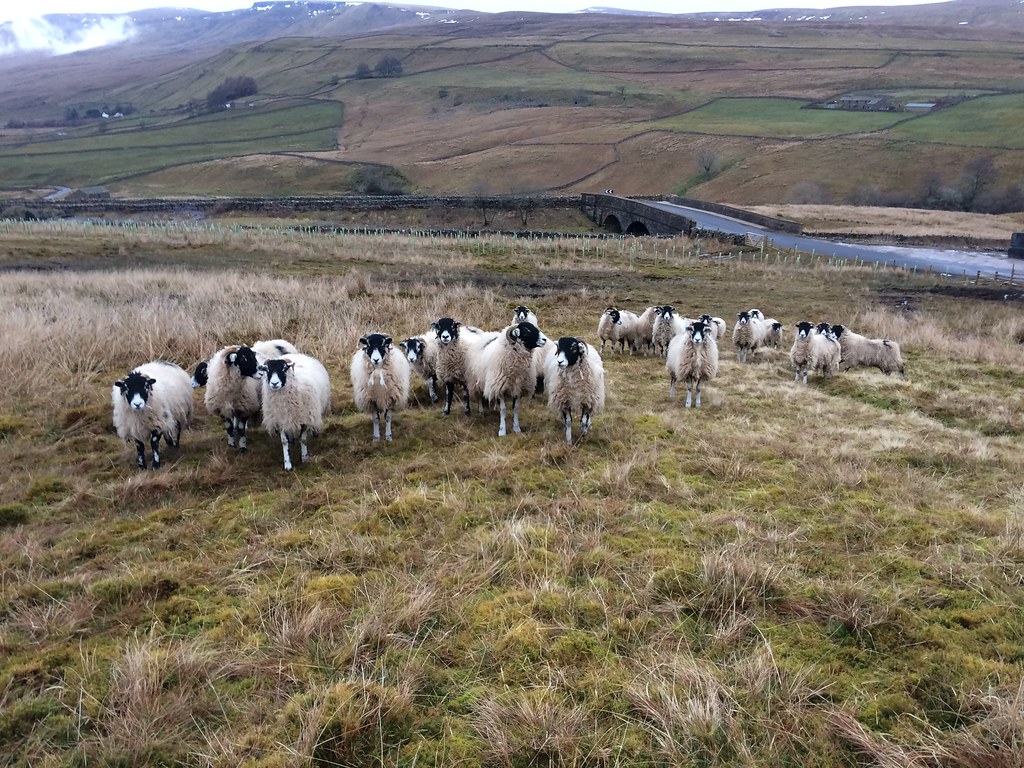 Sheep chasing me for my food. You're not getting it! 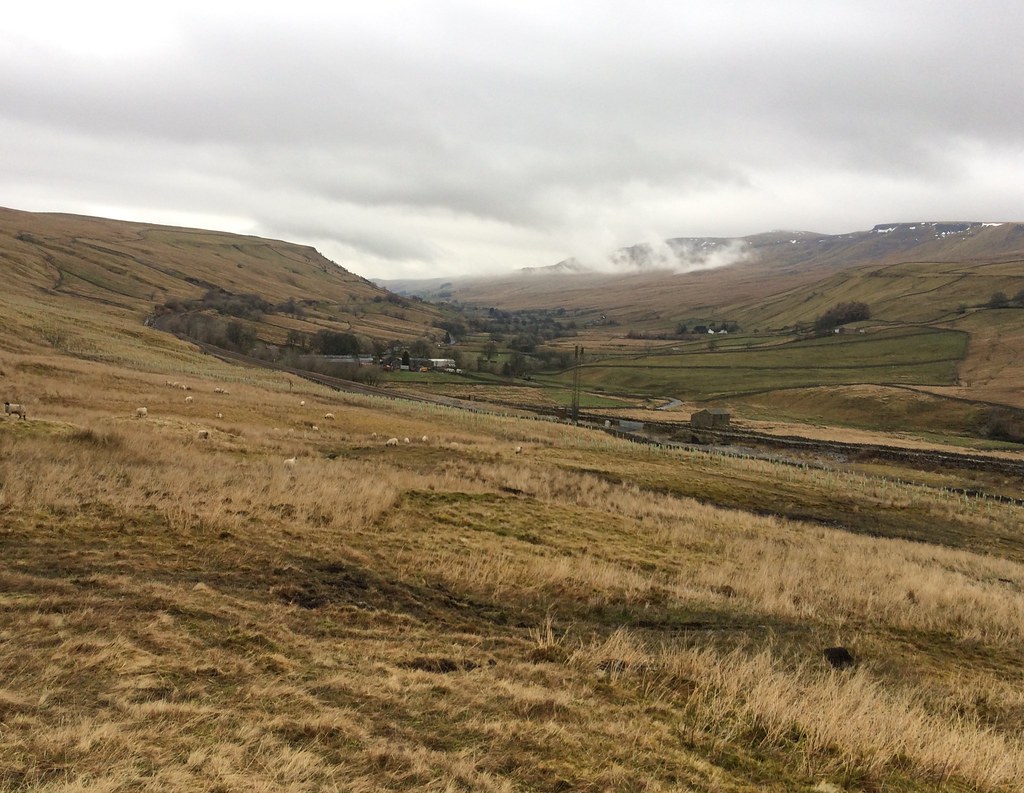 The northern approach to Wild Boar Fell is probably better , but this route provided a better circuit, also including Swarth Fell. Photos were poor, but it was easy enough to appreciate the crags on the east face in real life. 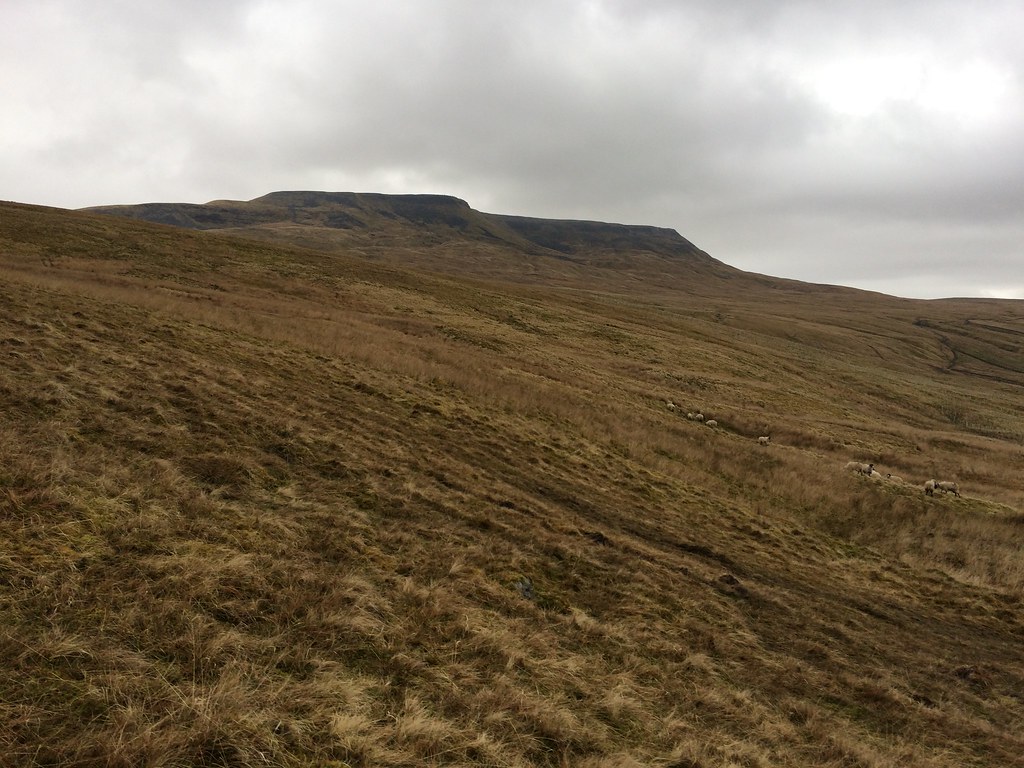 Swarth Fell also had an edge of sorts, and after 20 minutes of squelching over mossy ground, I climbed steeply up a breach in them to reach the plateau-like summit ridge. Sadly a new bank of mist had moved in from the north over the last 30 minutes, and I was now in it. 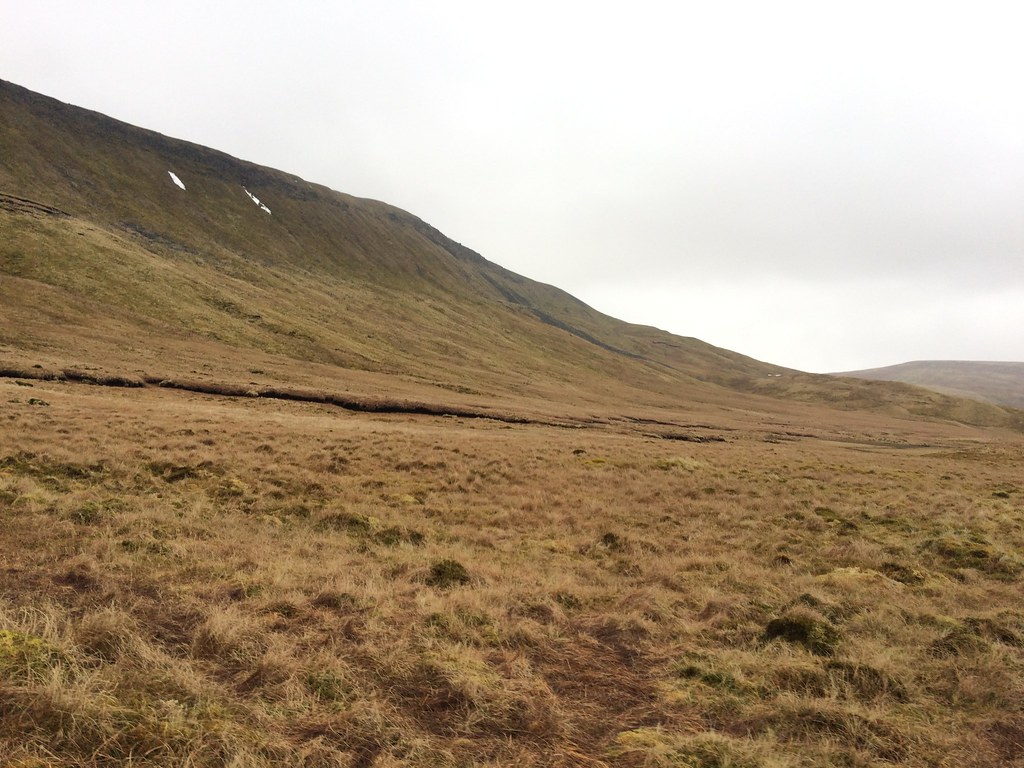 Although I liked the shape of the Howgills, I have to say I preferred the kind of boulder-studded terrain that was on the summit of Swarth Fell. Following the wall took me down into the col between the two summits. 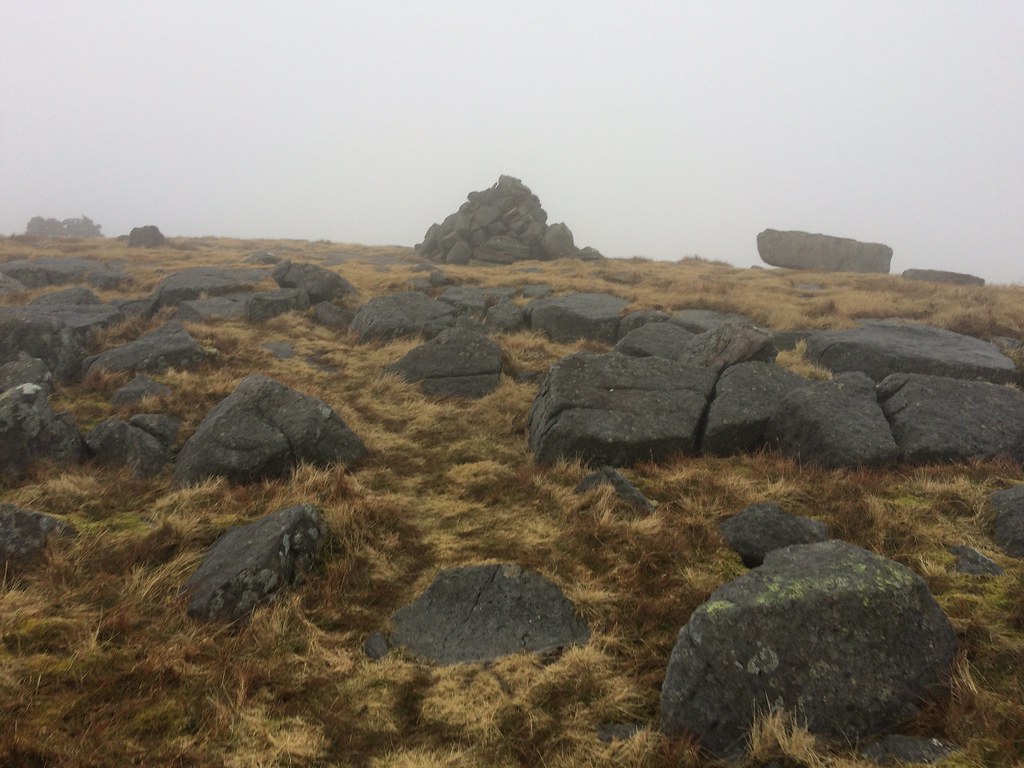 An ambling path up Wild Boar Fell, boggy in places, took me to a line of cairns on the edge of the eastern escarpment. I had seen these earlier from the car and briefly thought they were people. 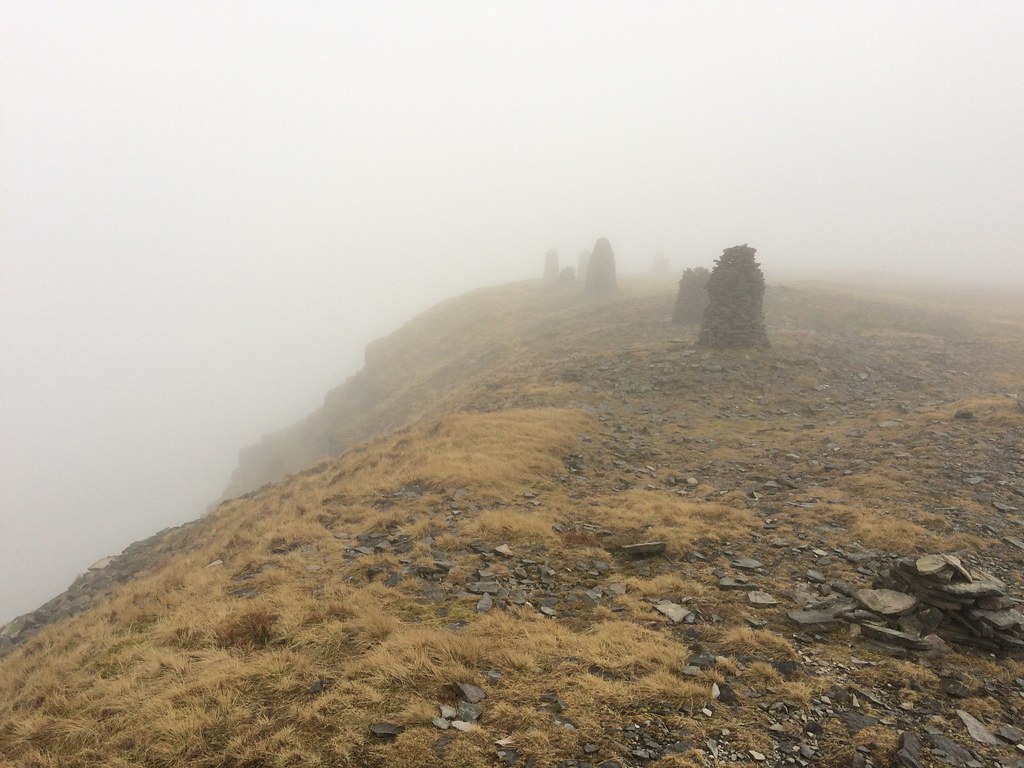 The trig point was on the far side of the plateau, which I tried to reach without taking a bearing. In dodging some deep swamp, I found myself back on the eastern edge again. I had another go, this time finding the trig successfully.

Back to the cairns, I picked up the south ridge and walked along the top of the crags. Shame there was no view here as it looked to be lovely. As was the small, un-named tarn on the way down, which would make a great camping spot. 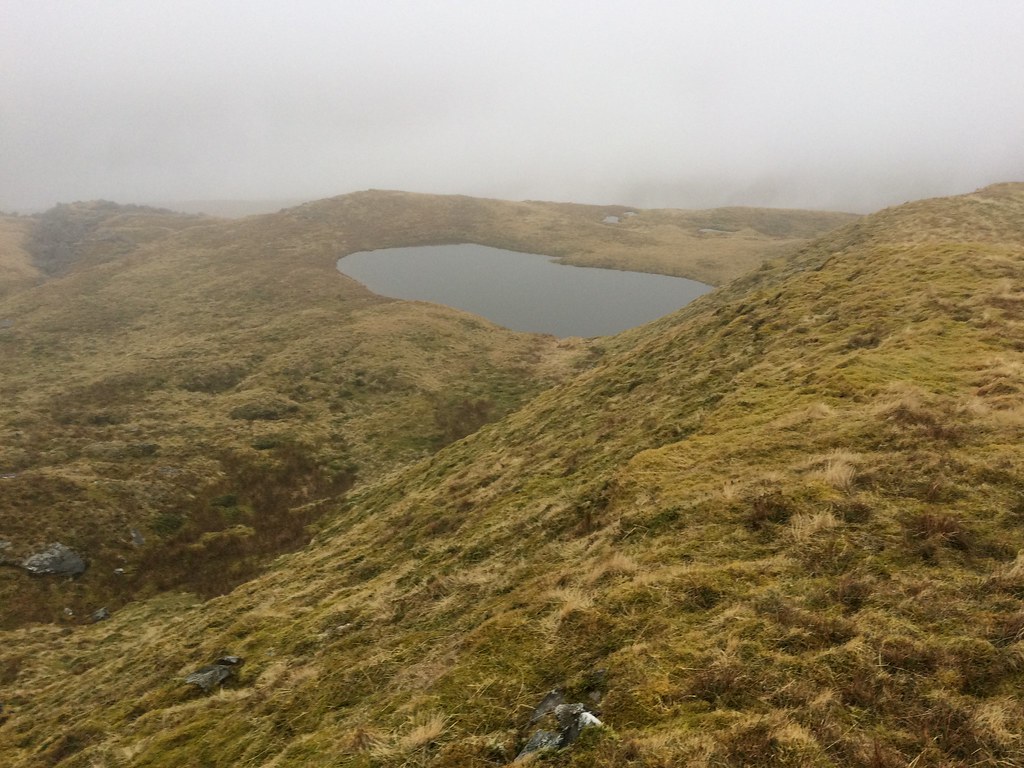 Some rather deep bog and a couple of stream crossings took me back to the hungry sheep and the car. I had thought to drive round to Lovely Seat for a quick walk in the last light (looked to be a 15 minute job from the road past it), but in the gathering misty gloom, I decided to hit the road straight home, stopping in Barnard Castle for a chippy. I'm rather hoping I get another chance to get to the Dales before I head back north, as this token visit wasn't really a fair representation.

Pity you didn't see the Howgills at their absolute best, but fine nonetheless. I didn't ascent the full height of Cautley Spout (opted in favour of the afternoon sun walking down the valley) but in retrospect wish I had done.

Still have to do Swarth Fell, and that line of cairns looks worth a viewing in its own right.

A great set of hills, both of 'em and as Alte mentioned it's a shame that you didn't get the best of weather to get full appreciation of these fells. Well done, a fine walk in a good time