The first notion I had to climb these hills was on a scouting trip through to Glencoe a few months earlier. I was in awe of the huge conical frame of Beinn Dorain that appeared before me just a couple of miles north of Tyndrum (and they say that straight lines don't appear in nature). Along with my partner in climb, Scotia_1980 (sorry about the pun mate), on a particularly fine March day when visibility was reasonably good, the sun was shining and the temperature was definitely spring-like, we left Bridge of Orchy hotel car park just before 12 and headed for the underpass at the train station. We had decided to take the most popular and obvious route and headed for the Coire an Dothaidh. A fairly well defined path heads straight for the corrie between the two hills but even without any major rainfall over the past few days the walk was quite boggy. The path runs along side a burn for most of the way and having trudged through mud quite a few times the decision not to wear gaiters was proved to be a bad one.

The corrie itself was quite beautiful in the afternoon sun, with the imposing shadowy cliffs on Beinn Dorain to your right and the steep slopes of Beinn an Dothaidh with its 300 foot waterfall to the left. The path steepens quite a bit from around 550-600m up to the bealach at the top of the corrie which is marked by a cairn at 744m. If you plan to scale both Munros then you have to decide which way to go, left to Beinn an Dothaidh or right to Beinn Dorain. 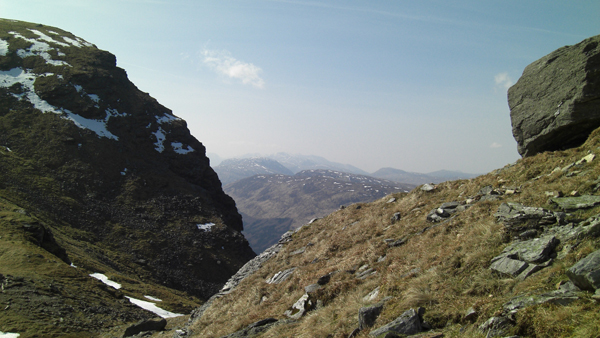 From the bealach we headed due north to the cairn that marks the western summit and then east to the central summit which is the highest, below the vast wasteland of Rannoch Moor stretches off into the distance towards the Mamores and the Grey Corries. Beinn an Dothaidh is a hill made up of 3 summits, but as the wind was quite brisk to say the least and with no cover to stop for a well earned rest, we took a few snaps and decided to make the descent without going for the third summit. With a lot of snow still lying this high up the descent back to the bealach was made tricky with all the lateral water but once the wind dropped we decided to stop for our packed lunch. Feeling full of energy we headed straight through the bog back to the bealach and then upwards towards the north face of Beinn Dorain. The north face still had quite a lot of snow which we took great care to avoid as it was still a few feet thick in some places. After another 45 minutes of climbing we could see a cairn in the distance and I took great pleasure in letting Scot think that this was the top (even though I knew it wasn't) but once we reached it we could see the true summit was not too far away.

The wind had dropped quite considerably and we stayed for a good 30 minutes and took in the views. There was quite a bit of haze in the air but the outlines of many great hills can be seen in the distance:- North to the Black Mount and Ben Nevis in the distance Looking Down on Creation

Once we had had our fill of scenery, all that was left to do was to retrace our steps back to the bealach and down through the corrie. We hadn't pushed the pace at any time and we were in the Bridge of Orchy hotel before 6pm for a well deserved pint. The journey had took just under 6 hours.

Great photos and a cracking first report there thomasp67. The views over Rannoch Moor from Beinn an Dothaidh are stunnning, aren't they? I'm amazed that there is so little snow really, not so long ago it was all down to low levels; this winter has been weird.

This is a great walk on a fine day. I was up there in February, had a magnificent day out - here are some of my pics

on the way up to Beinn Dorain

me on Beinn Dorain summit

me on Beinn an Dotaidh summit

the snow certainly seems to have melted quickly, has there been no significant snowfall there since I was there in early February?