The sun was just getting up as we set off to tackle Schiehallion. This was the place where the the Astronomer Royal, Maskelyne, became the first person to measure the mass of the earth in 1774. No calculators or computers to help him and his scottish assistant, Charles Hutton, but which also led to the birth of contour lines..memo to myself must remember to practice my map and compass !! As we drew into the Braes of Foss car park we saw the majesty of this grand mountain and the snow covering its top, so we got all the gear on, and headed out of the rear of the car park and past the useful information board and headed on the new path towards the ridgeback of the mountain. As we quickly walked up the ridgeback of the mountain the surrounding hills started to appear and to the east we saw Meall Fhearna and Bienn Eagagach shining in the winter sun. Also Loch Tummel became obvious the higher we went and as the path was so good it didn't take us long before we thought that we were near to the top. However that was the first of the 'false' summits and it was a case of minor disappointments but we were not that disappointed as we could indulge in a snowball fight !!! I know its childish but.... Onward and upward we went until we came to one of the cairns that gave great views across to Dunalastair Water and Loch Rannoch. However it also gave us an indication that it was wintry and bleak. Then we met the guys from Trail magazine who had forgot their camera so we snapped them and emailed them the pics, so look out for us in the next issue - some chance ! It was turning into a great walk especially with their cairn terriers with their wee coats on having a great time in the snow. The guys and the Cairn terriers.... The cairn before the 'rocks' - great views!!

So we pushed on and not too far ahead we had a wee scramble. I was pleased because Su went up it like a natural especially as she had got confidence from the Stob Gabhar climb, and before long we were following the tracks of the two guys and got to the large blocks partially covered with snow and now had to do a bigger scramble but again we both climbed it no bother and found ourselves at the top very quickly. There wasn't much room at the cairn and another party was quickly approaching. Su and myself at the summit

No sooner had we reached the top we were joined by the oncoming party and we shared the photograph duties and found out that one of their number was a guest from the Phillipines and this was his first munro ! The poor bloke looked frozen but was loving every minute of it. Before they went one of their party was excited because he had seen the brockenspectre during the week when one of their party was seen to be immersed in a rainbow. If you want further details look it up in wickipedia. Its like the sun projects light to a spot beyond you and an inversion is evident and the optical sight is an object surrounded by a rainbow. I've attached a picture to illustrate what you would see. it is more common when you are in a plane and fly above the clouds. So off they went and no sooner had they gone when we had another couple arrived at the cairn. It turned out that this nice couple were having a wee walk and they also did the photos bit and we had a bit of a blether. Ross, it turned out was an engineer who put up masts on scottish (and lake district) hills and often had to carry the gear up the hills. It turned out that he climbed hills for a living and had done most of Scotland. His wife Carolyn was also a keen walker and camper and this was their way if a day out!

As the mist had come down the views from the top were not good (for the 3rd week running!!) so we made our way down the mountain. 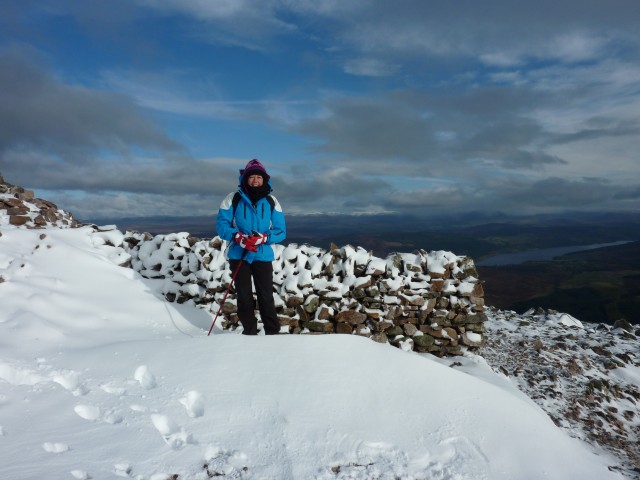 Su at the wall

The final surprise was to find a cool friend that we met on the way down. It was a great day out for all sort of reasons and after Stob Choire Odhair and Stob Gabhar it was good to have a straight forward climb with enough to keep us interested but also we were lucky to get the mountain on a day where there weren't many walkers. The wintry conditions were also a first for both of us and it gave us a taste of what we might come across this winter. So on the way back we called in at the Queens View to see if we could get a photo to record what we had done, and with fish and chips for tea, it ended a great day. Schiehallion on the left, taken from the Queens view

I found that peak very annoying with it's false summits - and it's boulders!

Where on earth is that terrible place in your Brocken Spectre pic?

Not sure where it is. I just found a site with loads of photos to show what the effect isfor anyone who might be interested !!!!!!!Though I thought It was quite funny getting a lecture on Brockenspectre at the top of a mountain !

My first guess is the Aonach Eagach...

Excellent - amazing amount of snow still. Weather now is very mild so will be interesting to see how long it stays there.

Here is a spectre I experienced on Stob Binnein summit from Feb this year: 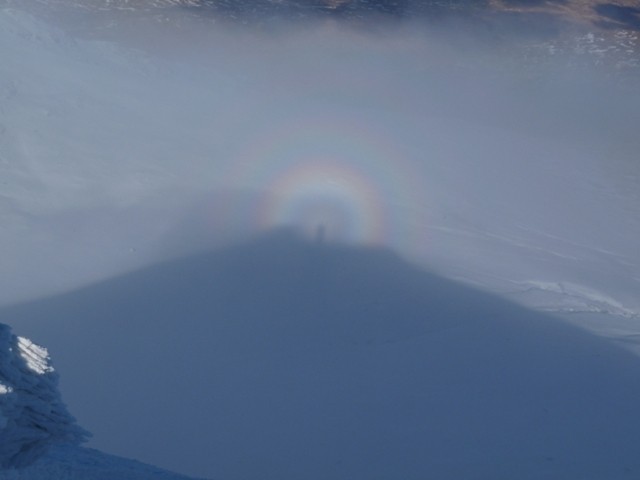 If you didn't know this could freak people out and shouts of YETI would be heard from Cape Wrath to the borders !!!!
Great picture .....

I'm surprised at how many Brocken Spectres I'm getting in recent years - must be climate change!

Personally, I'm hoping the snow clears for the Glencoe meet (I know lots of other people won't be) as I'm not the most confident winter walker so it can be very restrictive for me... especially now I'm running out of easier Munros to do!

Good report Brian, that's an impressive amount of snow at this point in the year. Wouldn't mind seeing some at the Glencoe meet, but the rain is probably going to do away with it.

cracking report and you had energy for snow ball fights

mountain coward wrote:I'm surprised at how many Brocken Spectres I'm getting in recent years - must be climate change!

Personally, I'm hoping the snow clears for the Glencoe meet (I know lots of other people won't be) as I'm not the most confident winter walker so it can be very restrictive for me... especially now I'm running out of easier Munros to do!

Have you ever thought that seeing these Brocken Spectres might be the result of too much of the falling down water !!!

Not in my case! I had to give that up at a very early age!

Stretch wrote:Good report Brian, that's an impressive amount of snow at this point in the year. Wouldn't mind seeing some at the Glencoe meet, but the rain is probably going to do away with it.

Yeh it looks that way but at least it gives to fairing up a bit after Friday....roll on Friday !

Cracking pics. Amazed at the amount of snow. I'm heading up to the Cairngorms for a week this Saturday and I'm now contemplating buying a pair of crampons after seeing this report!!

lolvey shots. thanks for sharing your journey -- and your encounter with the snowman.

Hi Kdexter.....I see you only joined today and this is your first post - thanks for making it on mine !!

Will look
out for your posts in the future. Any ideas on your first walk ? This site will give you everything you need to get out there and ENJOY!!!!