Just a very short report - for reasons which will become apparent - because from pics in others' reports (subsequently checked to see what I'd missed), the views will be excellent, even if I didn't get to see them...

... and I haven't seen this route described anywhere, and it's very doable.

I'd planned to set off for the Braemar WH meet early on the Thursday morning and get an afternoon's walking in. But the forecast was poor so I decided to go up on Friday instead.

Apparently conditions of almost tropical sunshine and warmth reigned throughout the Thursday. Whereas when I got to Braemar on Friday the mist was down to about 400m

However the thought of solitary whining into a few glasses of beer for the next few hours did not appeal, so I decided to take a walk into the hills and treat it as a navigation exercise. This is the route I took.

After getting my tent and sleeping arrangements prepared, checking if anyone was around in the hostel (only one person!), I set off from the car park just east of the Invercauld Bridge at 15.00. The principal reason for starting here is that it's a river crossing point! 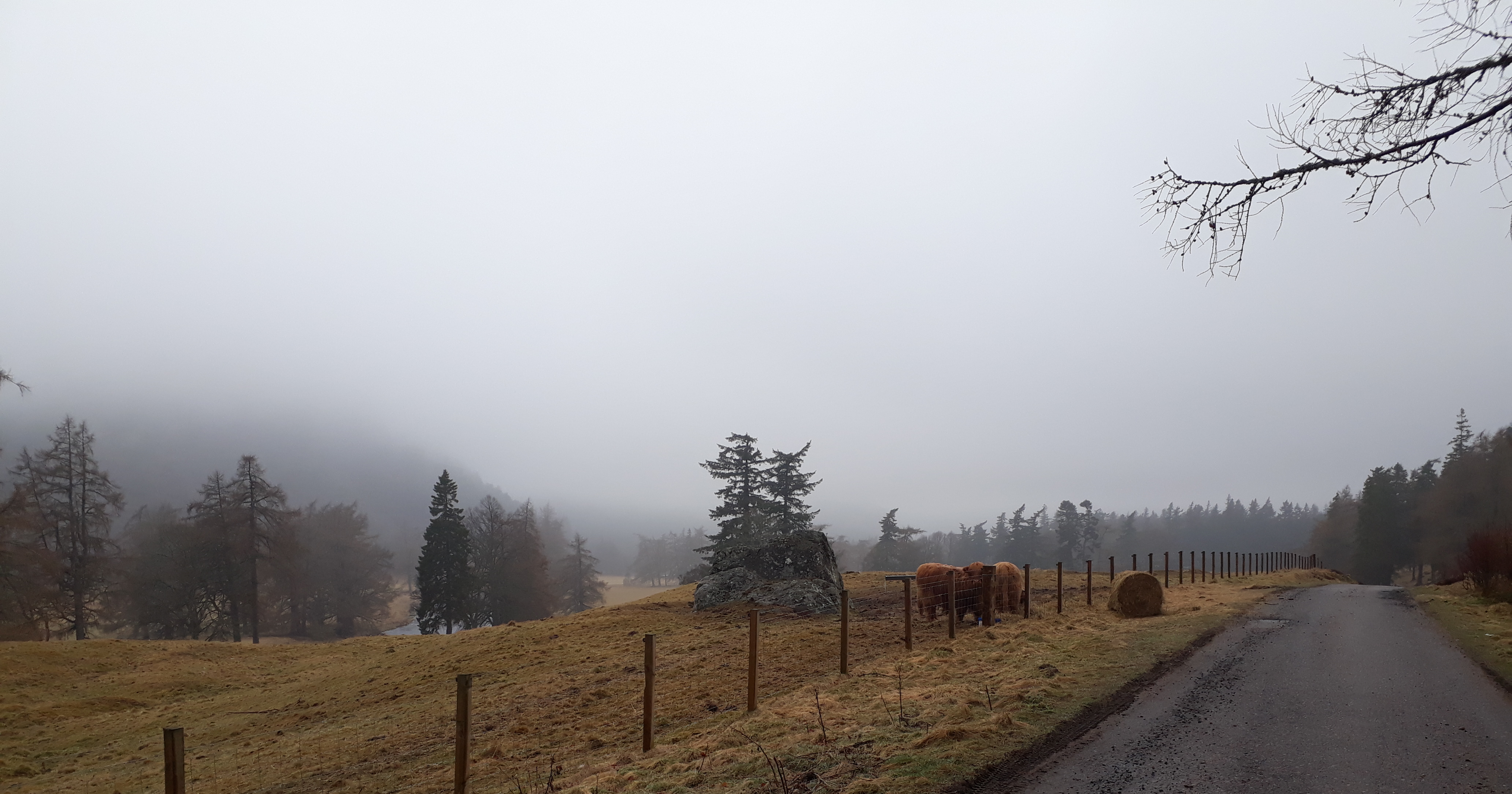 The first couple of kilometres follows the metalled road 'til just past Invercauld House, after which a vehicular track cuts up right to "The Stables" and into the forestry... 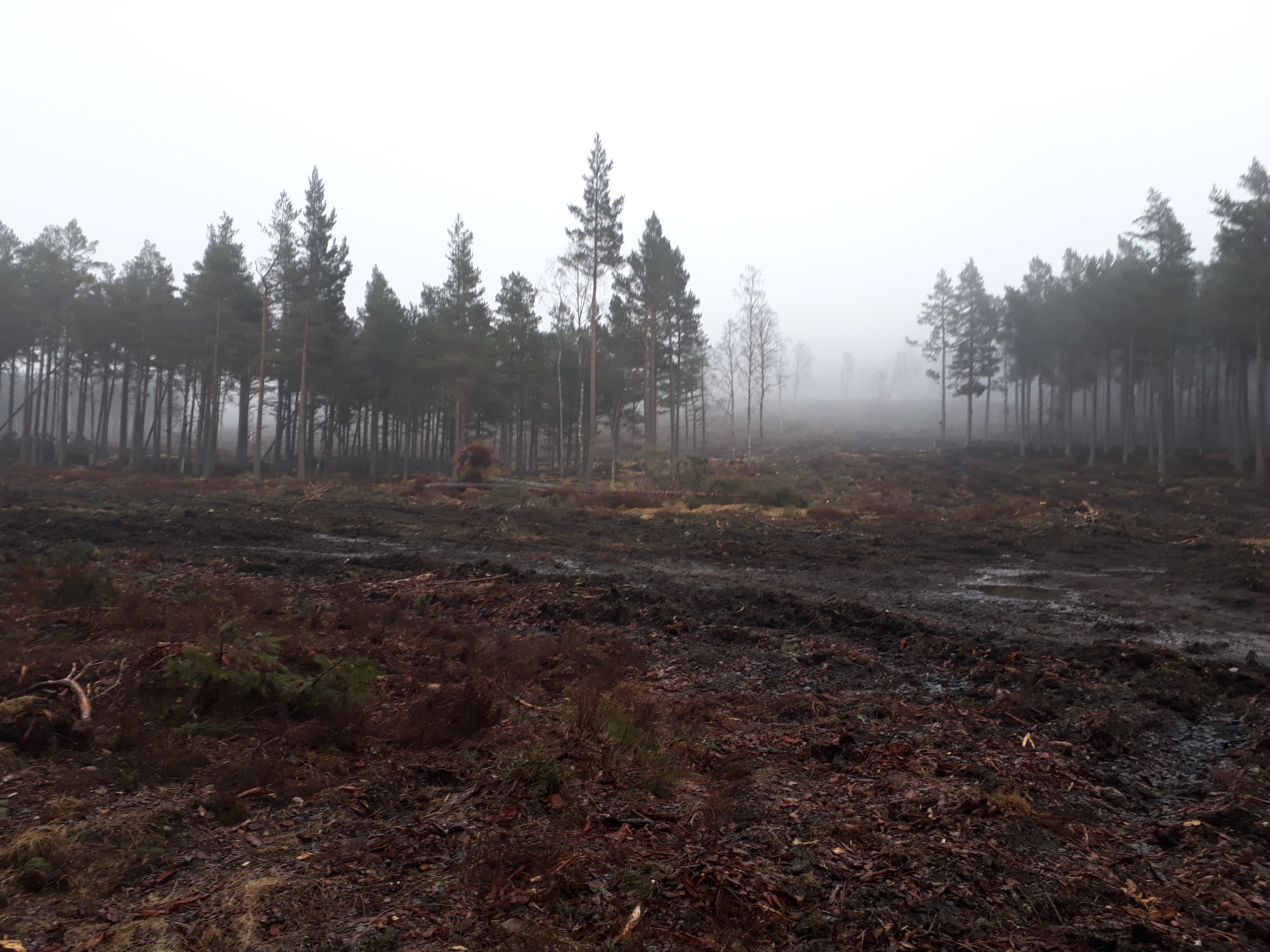 I follow the track for a kilometre or so, then head north towards Creag a' Chait across roughish ground. The idea of navigation practice is irrelevant here, because one couldn't really go wrong, even in the densest clag, following the clear line of a collapsed boundary wall. 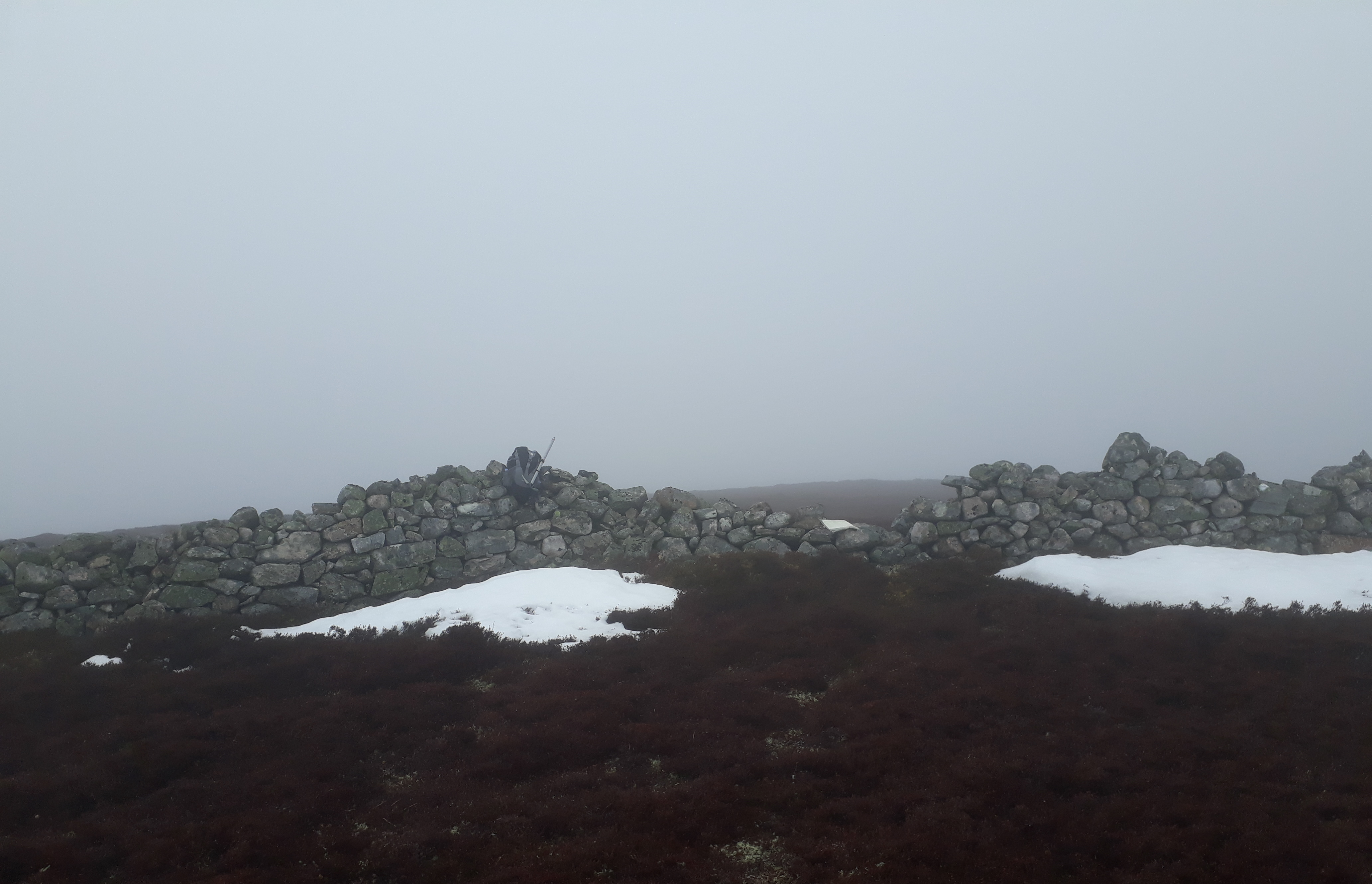 The wall continues to the summit plateau of Carn Liath - aka Creag an Dail Bheag. There are 3 high points on the summit. I leave the lowest east one, but visit the other 2. 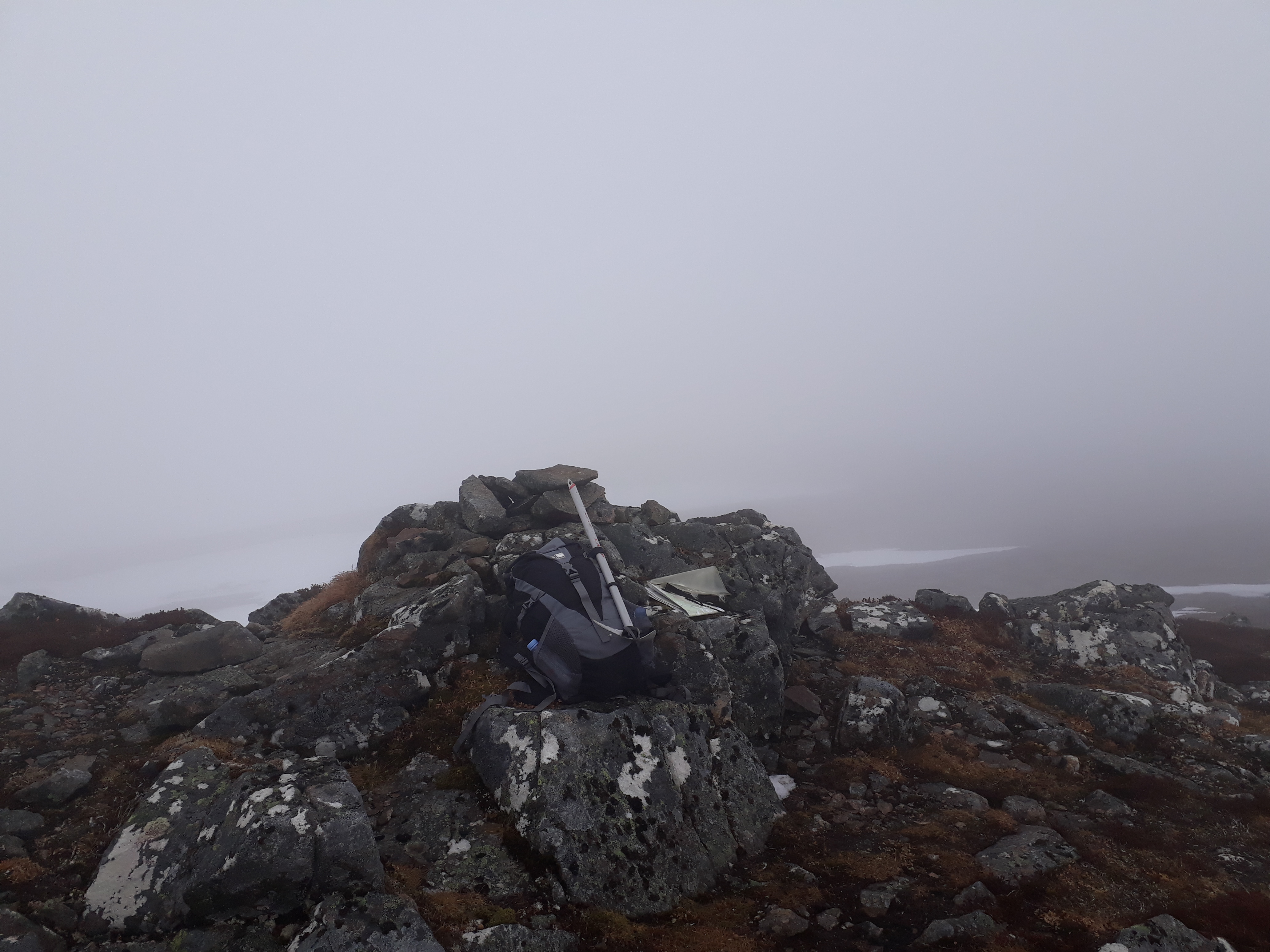 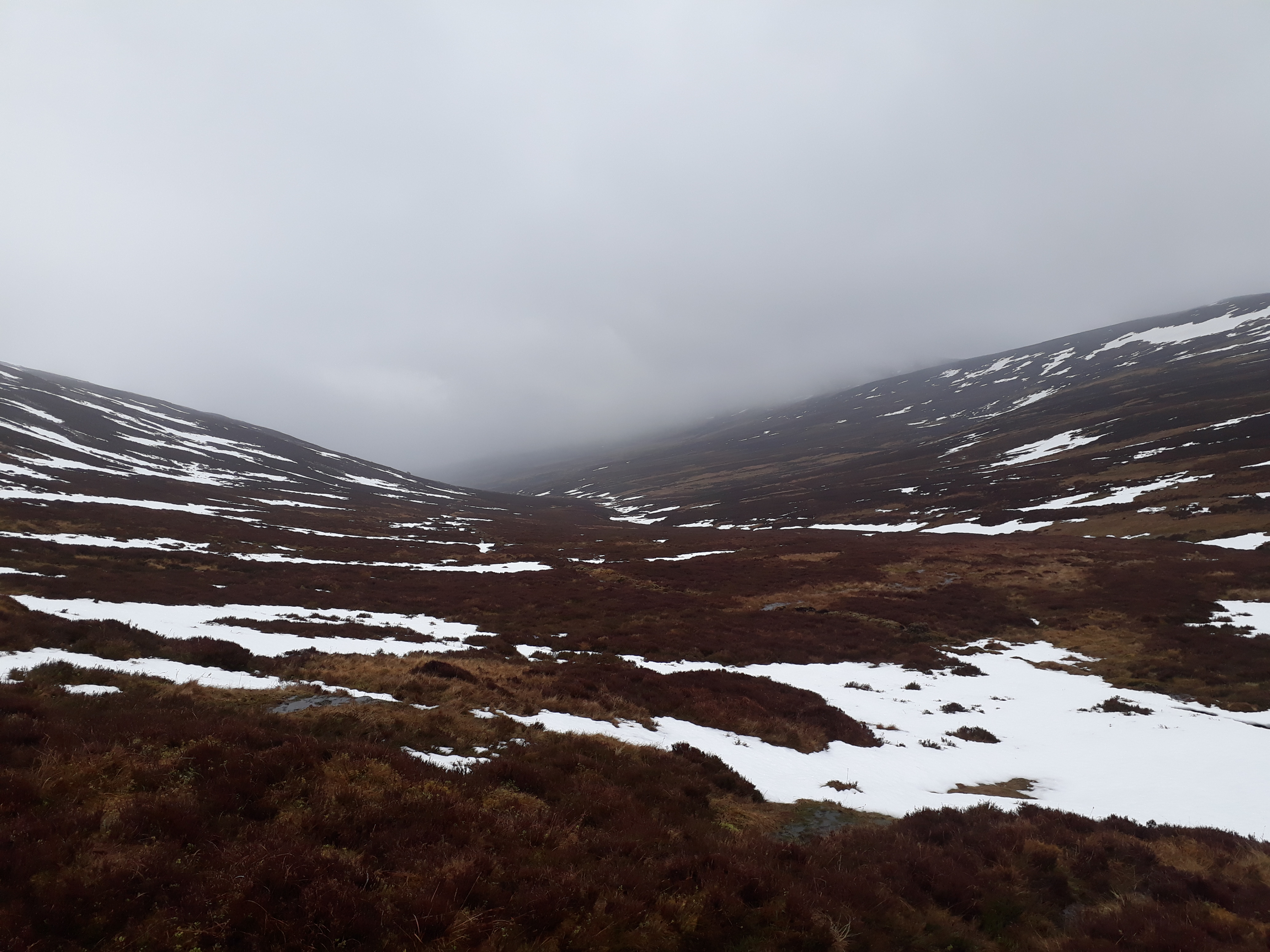 20180413_170617. Not hanging around to admire the clag any further, I now head south down the Glas Allt Beag glen towards Gleann an t-Slugain. 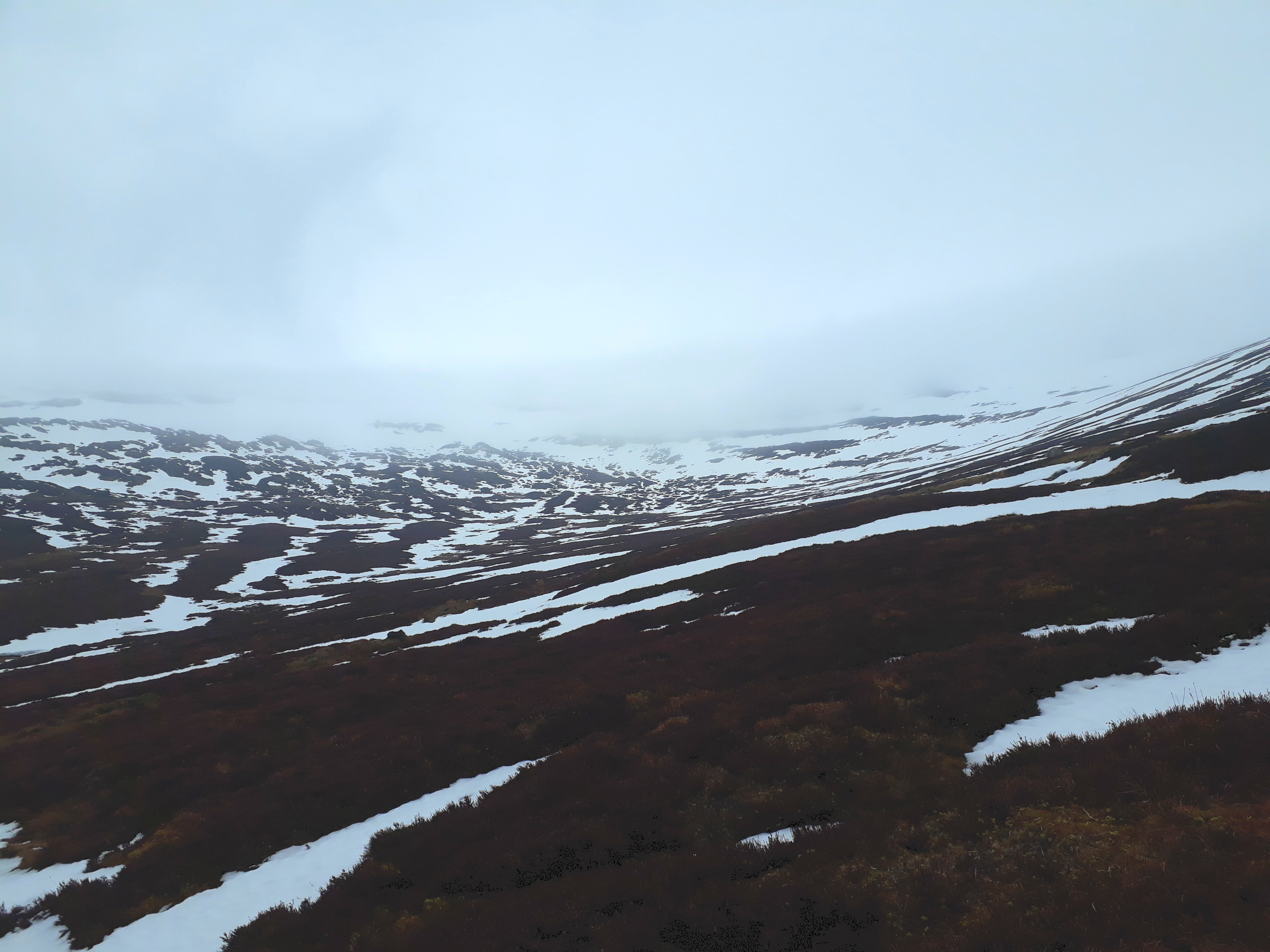 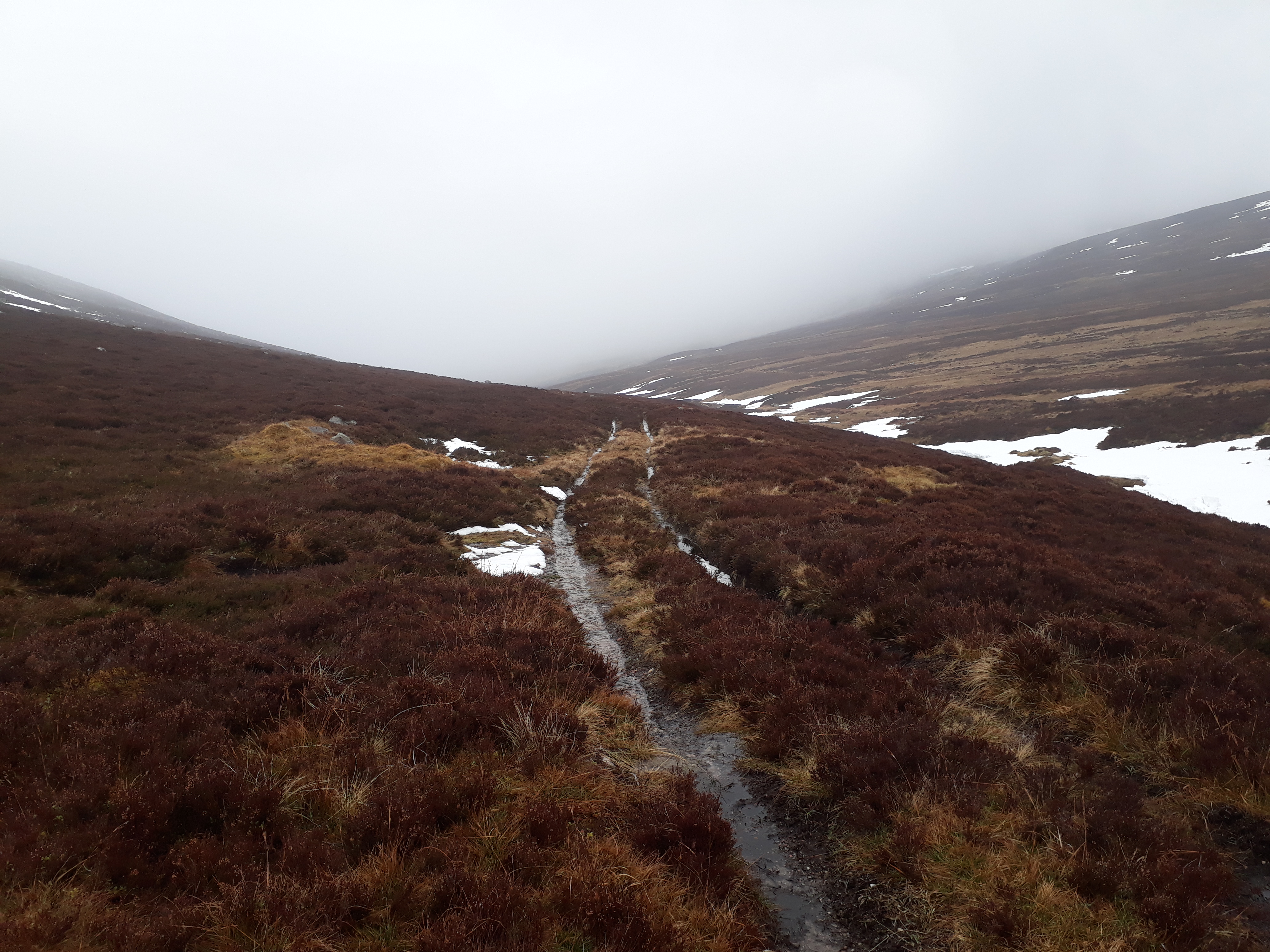 20180413_171156. I pick up and follow the vehicular track for a short while, but then drop down to the allt, since the track gradually diverges from it as it descends, and follow it down to where it joins the Allt an t-Slugain.

There is is quite a flow in the Allt Beag, and as the Allt an t-Slugain is a significantly bigger watercourse, I'm beginning to wonder how I'm going to get across. 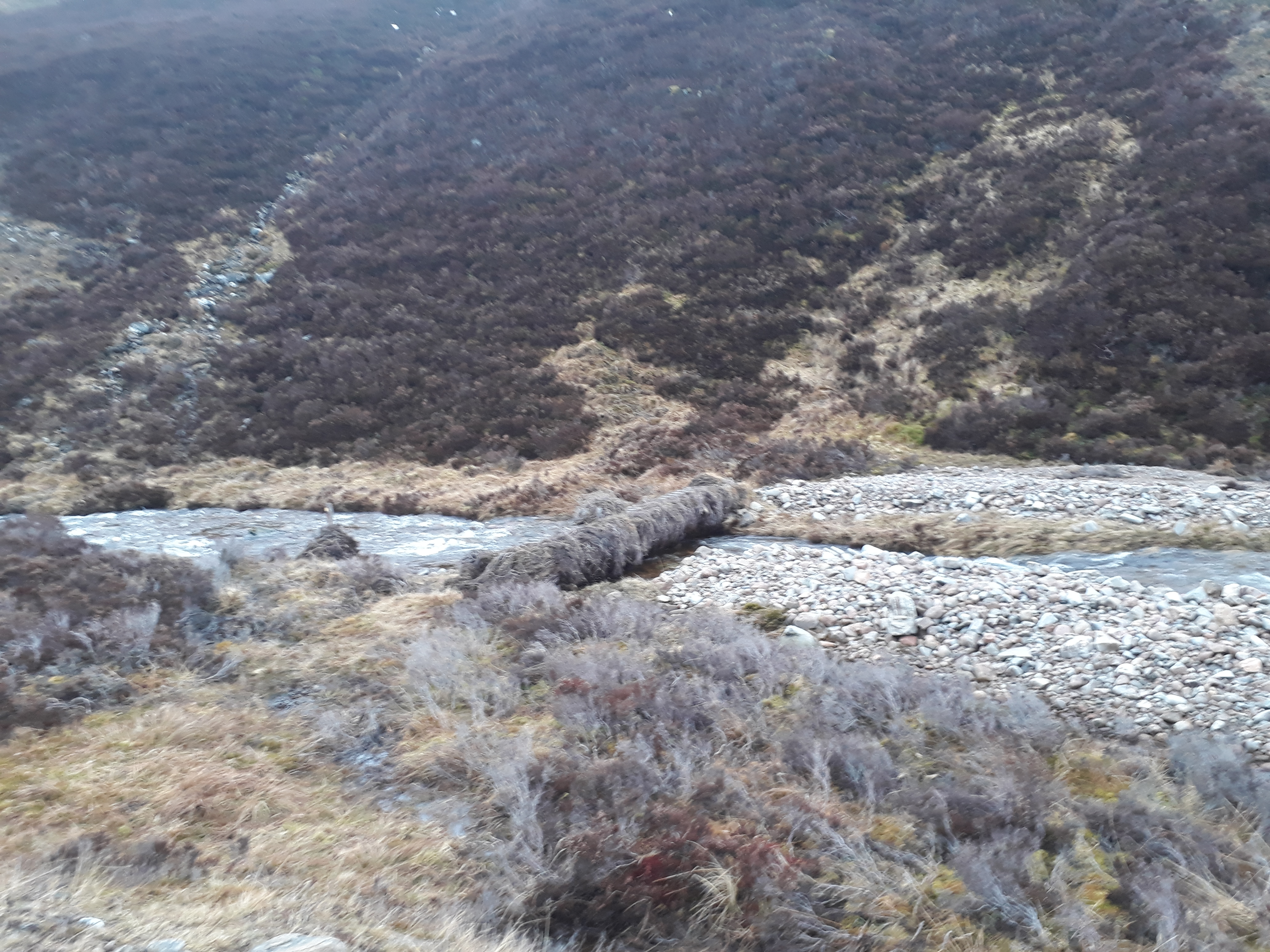 The furry camouflage is dead vegetation washed down the allt during spates. At first I didn't even recognize that it was a bridge at all, thinking it must be a large ancient tree trunk! I check the time: quarter to six, so there should be enough time to get to the summit of Carn na Drochaide and back to the car park before it gets too dark, provided I don't get lost!

The mist has dropped again during my descent, so I now take a careful bearing and start the ascent to Creag a' Chleirich, which is the 650m top to the east of Carn na Drochaide.

This way involves getting to the bealach between the 2 tops, since there is a very steep sided mini-glen - Clais nan Cat - that separates the north sides of Creag a'Chleirich and Carn na Drochaide. An alternative, that might be more straightforward in mist if you don't have a GPS, would be to cross the All an t-Slugain bridge, but then follow the allt upstream, and turn south west up the hillside after about 1.5 km, once past the end of Clais nan Cat. This would take you perpendicular to the hillside of Carn na Drochaide straight to the summit. 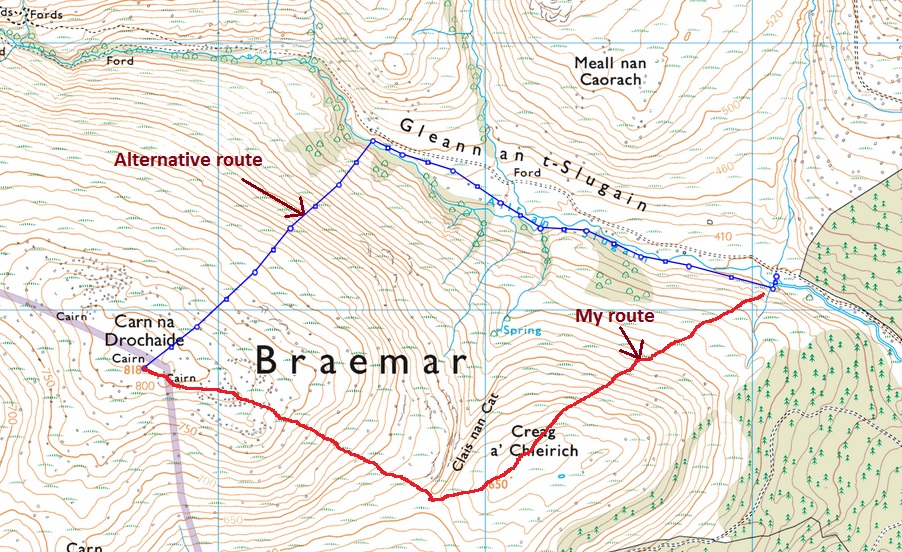 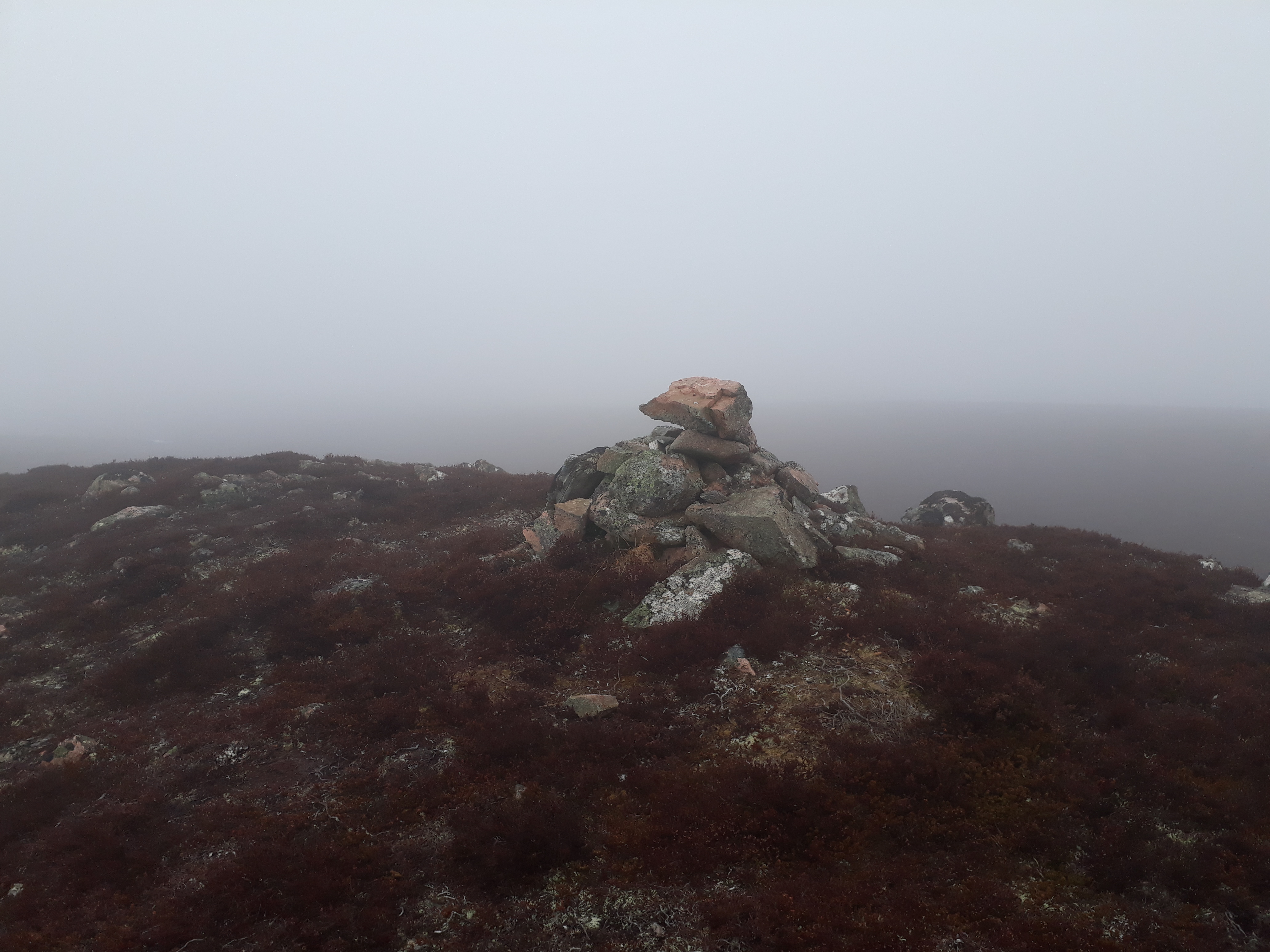 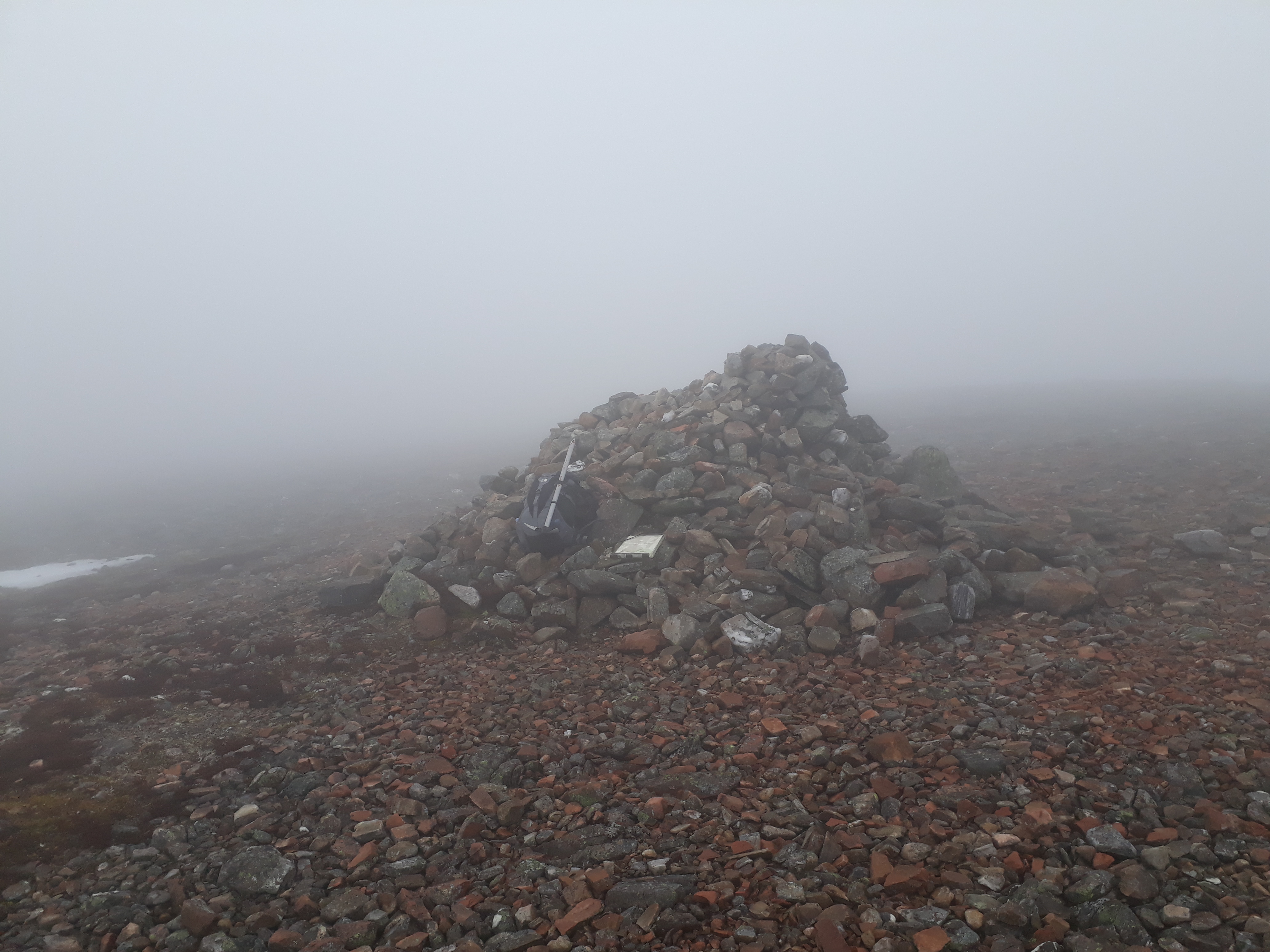 So I take a bearing SSE, and head off down the hill, aiming to hit the track near Allanmore that runs parallel to the River Dee back to the car. It's pretty easy ground - not too rough, and not too steep.... 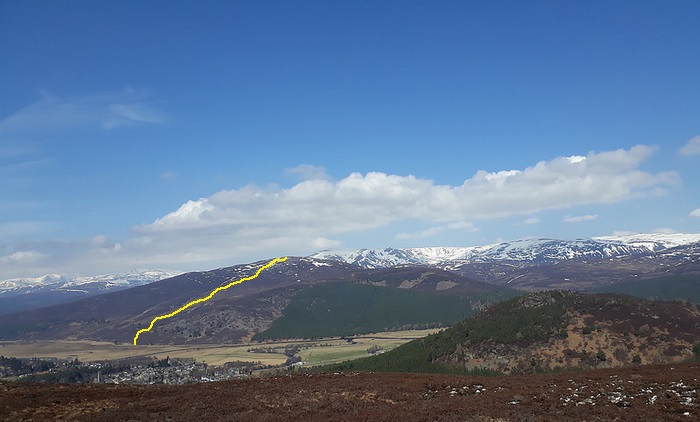 ...and I emerge from the mist 20 or so minutes later just above Allanmore. (Picture taken a couple of days later from the hills just south of Braemar).

After that it's a pleasant track walk - about 7 km - along the bottom of the Dee valley back to the car park. By the time I get back to the hostel, about 8.30, the WH party is in full swing..... 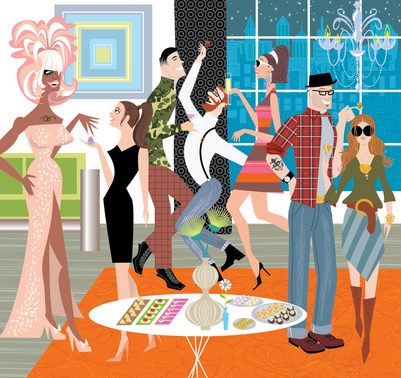 In summary, in good weather, I think this would be a good way to combine these 2 Corbetts. The off-path parts are not difficult going, and the views should be superb. The route could be shortened by 4km by using a bike for the first 2km up to the turn-off to the Stables.

Also, it would be possible to extend the route by about 5km to include Cullardoch (Jaxter pointed this out to me after I'd done the route described

- though I'd don't think I'd have had time to include it in the afternoon.)

Shame about missing tropical Thursday, but at least you made it in time for the infamous Walkhighland party...and survived

A good bit of exercise as a precursor to the weekend. Looking forward more to your Saturday and Sunday exploits though - bet they are better than this!

dooterbang wrote:Shame about missing tropical Thursday, but at least you made it in time for the infamous Walkhighland party...and survived

Yeah, there was quite a bit of tannin in the tea, but I survived OK...

malky_c wrote:A good bit of exercise as a precursor to the weekend. Looking forward more to your Saturday and Sunday exploits though - bet they are better than this!

Yes, definitely! Lochnagar on the Saturday (WHR just published) beat anything I could have expected; and the Glen Clunie circuit I did on the Sunday was also pretty amazing - no Munros necessary!