North Loch Cluanie 3 - The Apple that Failed to Self-Arrest

North Loch Cluanie 3 - The Apple that Failed to Self-Arrest


North Loch Cluanie 3 - The Apple that Failed to Self-Arrest

After a 04:10 alarm I was in the car and setting of from Aberdeen heading towards Loch Cluanie by 04:35. This particular weekend had the east coast getting battered by the "Mini Beast from the East". By 04:36 and a couple of wheel spins just to get onto North Anderson Drive I was already doubting this was one of my wisest decisions, but I opted to pursue.

The roads leaving Aberdeen were treacherous at best and the A96 on route to Inverurie was worse than I had ever seen. It was pitch black, the roads were covered in deep snow, my little polo did not have snow tires and all I had was the single track from the Timpsons van in front to follow

. Safe to say I did not need any caffeine to get the adrenaline pumping this morning.

After a remarkable slow motion 180 degree spin at 10mph on the Port Elphinstone roundabout I decided today was not going to be my day and I would head home. Between making that decision and reaching the return exit (approximately 10 seconds) I had re-changed my mind and was back on track - hence why you get to read this report!

Thankfully, as the weather had suggested as soon as I hit Elgin the snow had vanished and the black tarmac (& potholes) were a welcomed sight.

After a very eventful start to the day I had successfully and safely reached the start just off the A87 at 08:25 and was the only car in sight. Although the west was not getting the snow it was still experiencing incredibly high winds, even down at 200m. I remember thinking to myself this could be a very long day

Unforgivably windy but the view was worth the stressful drive alone! 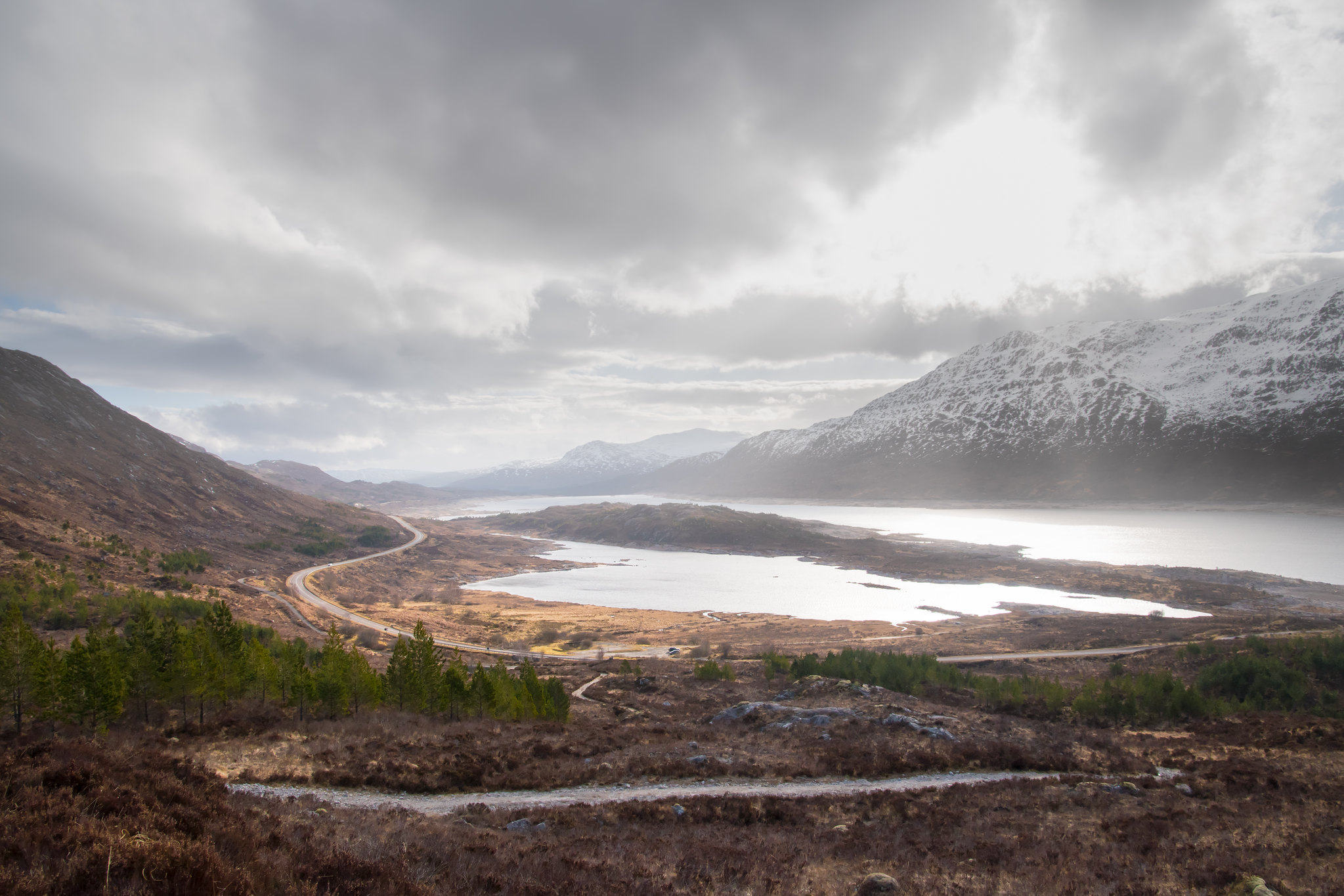 The overhead conditions were variable but with a 80% chance of cloud free I must admit I was slightly disappointed at first - thankfully the weather did improve dramatically as the day went on.

At 540m looking towards the first difficult incline of the day. 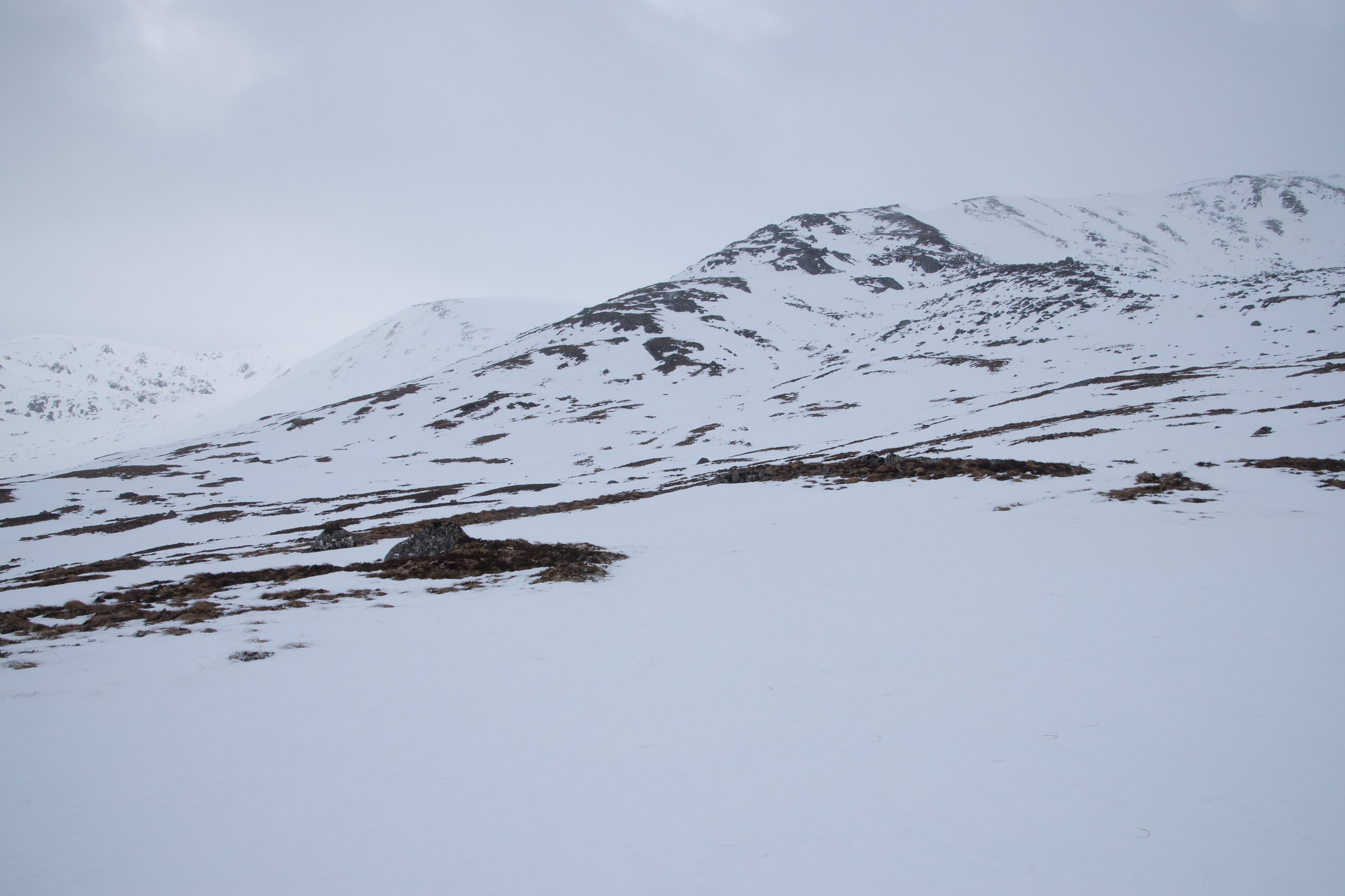 Once I stopped to get the crampons on I could see another solo walker making swift progress towards me. Pretty confident they would be flying past before the summit of the first Munro, Carn Ghlausaid.

The ascent was relentlessly steep, the constant battering of winds was not making the going any more pleasant and I felt as if I was already running on empty - contemplating that the stress of the drive was finally showing its effects.

After the hard work - a gentle climb to Carn Ghlausaid remaining. 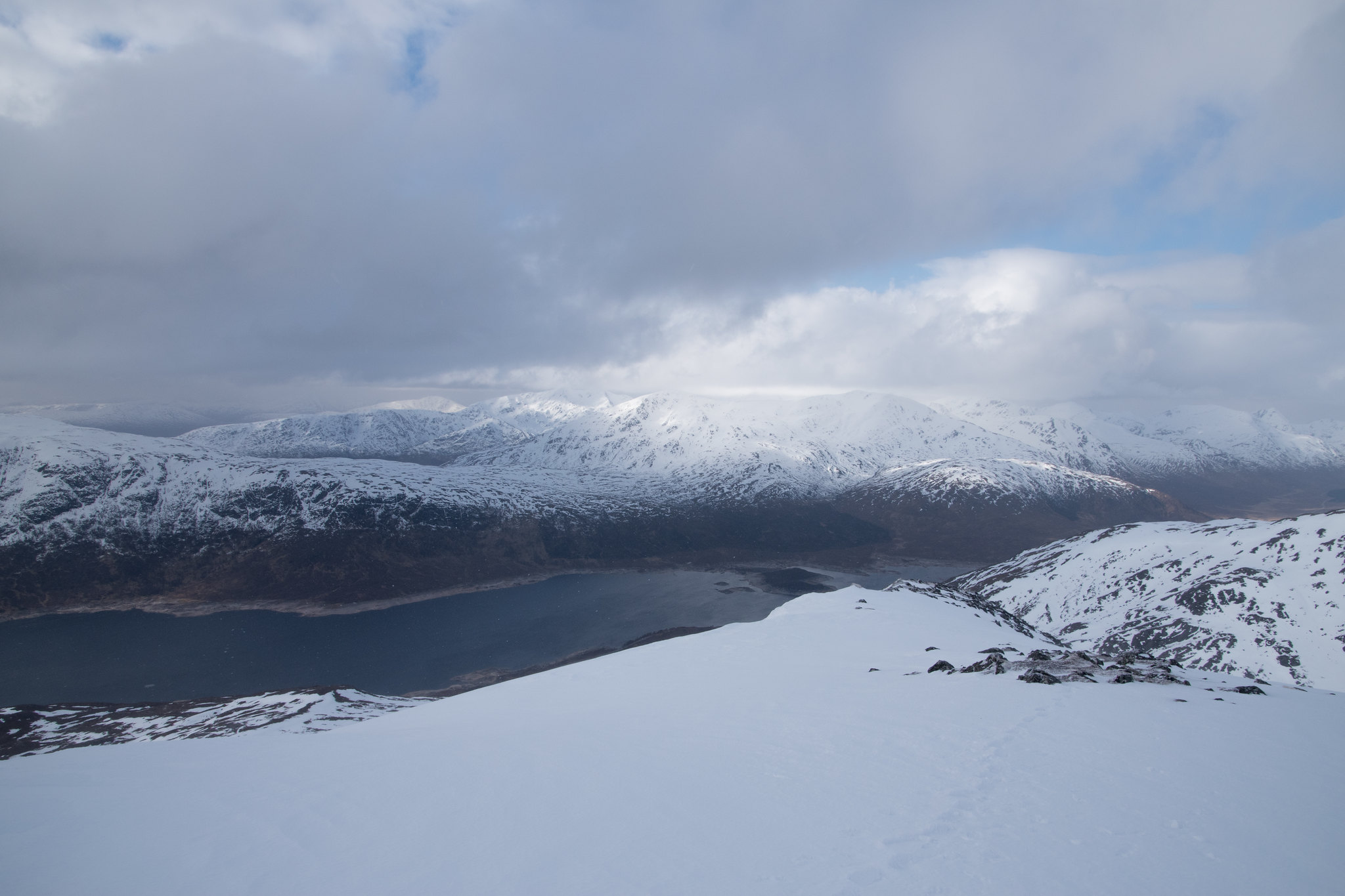 The views southwest from the shoulder of Carn Ghlausaid down towards Loch Cluanie were amazing. I was now just below the cloud base but I could have spent all day just enjoying this view, well maybe if it was not so bloooomin' windy!

On the plus side the snow appeared to be pretty well consolidated so even in the strongest of wind gusts only a small amount of snow was being catapulted through the air towards my face.

I reached the summit of Carn Ghlausaid for 10:00. I was deep in a thick cloud and made certain not to venture any further north from the small(ish) cairn as it was already clear there was an abundance of cornices formed over all the edges.

The view towards Creag a' Chaorainn was significantly limited and from looking at the map I took a wide line avoiding the cornice riddled edges. By now I was beginning to feel pretty aprehensive and made a call if it did not clear up I would not venture any further from the summit of the second Munro, Sgurr nan Conbhairean.

Not the best photos but shows the cornice and slightly improving views towards Sgurr nan Conbhairean. 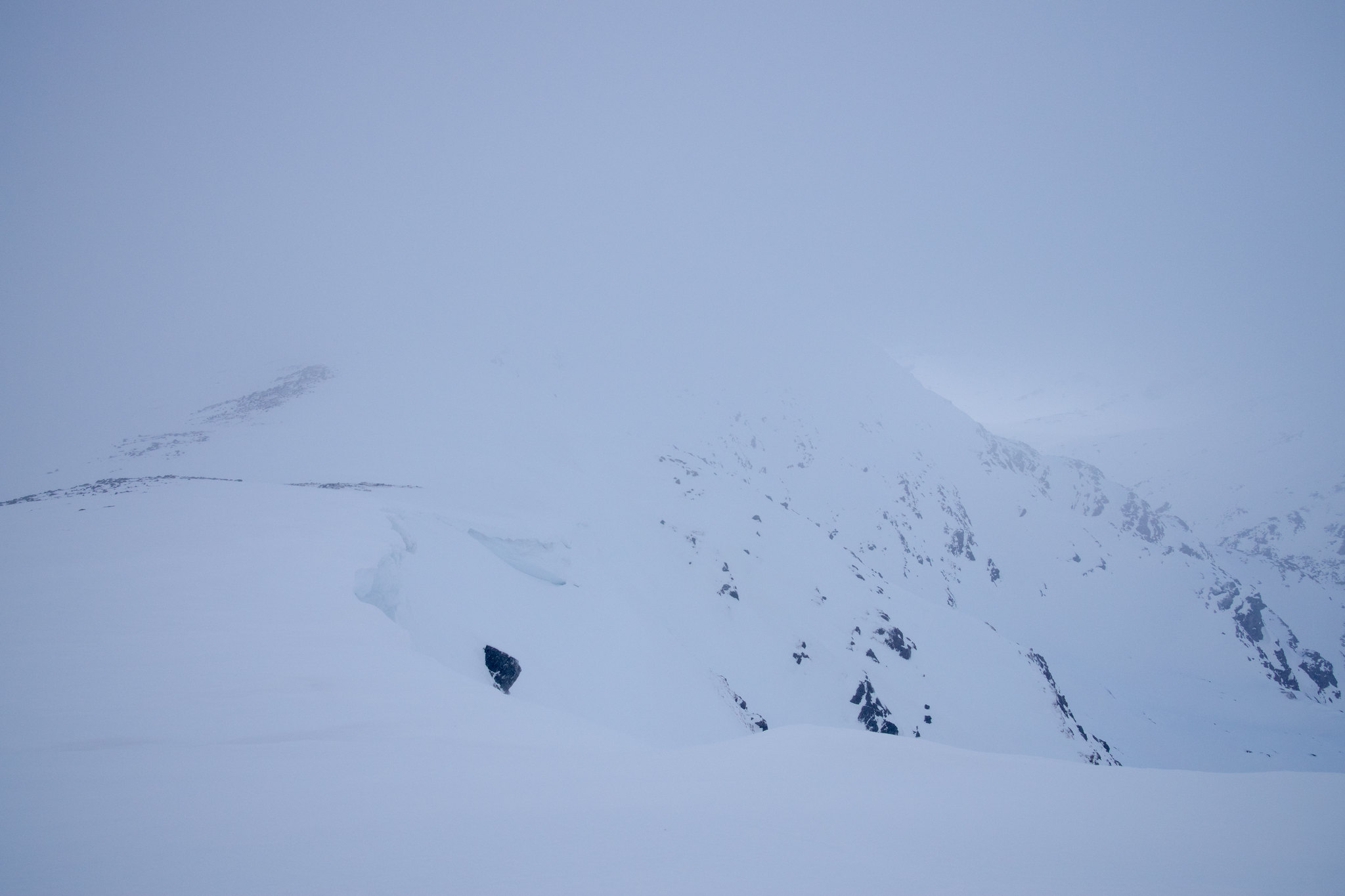 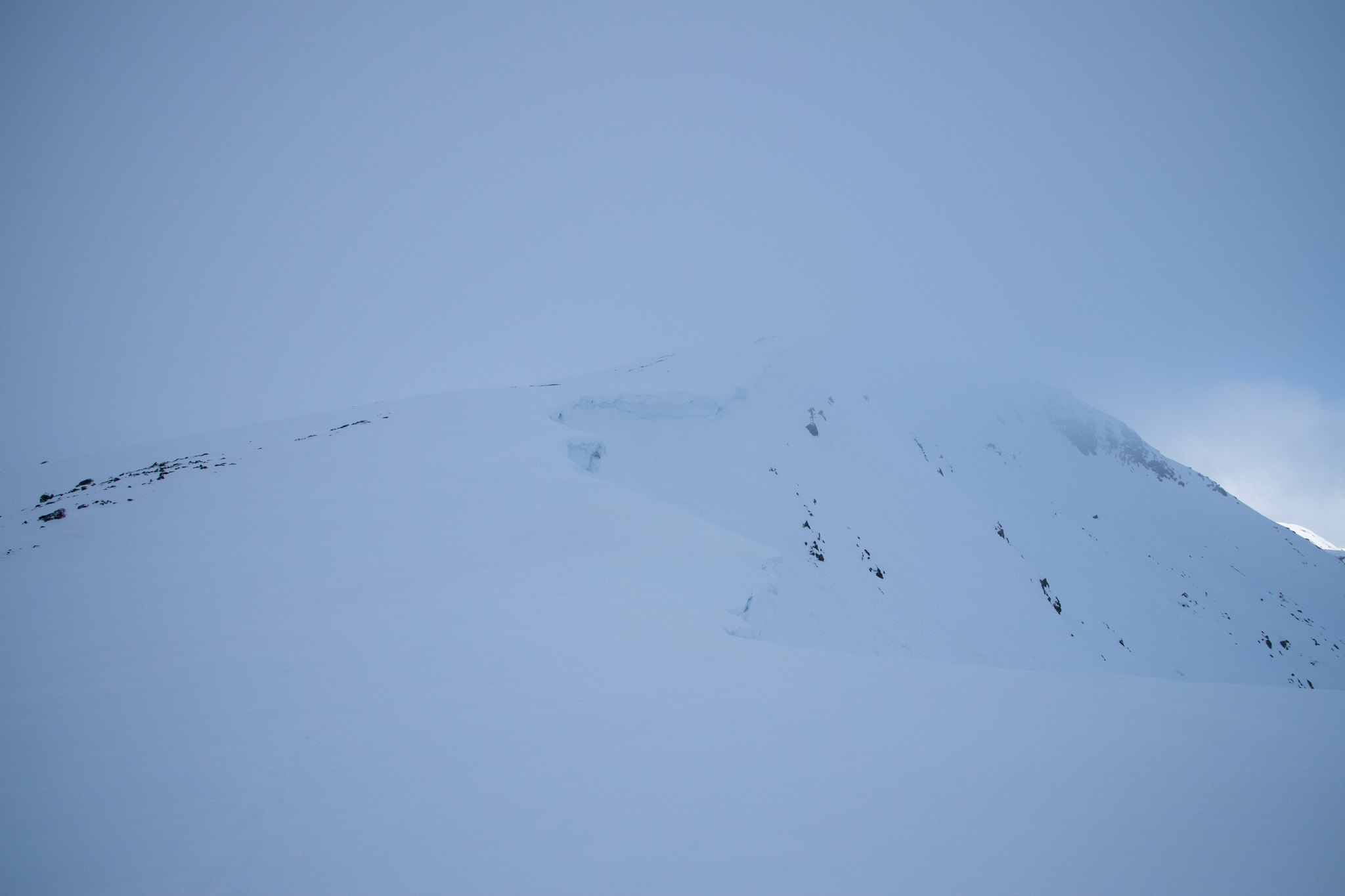 For the first time in the entire outing the wind dropped and it was strangely peaceful. I took this moment, unaware how long the calm would last, surrounded by low lying cloud to dig my crampons in on the relatively steep ascent towards Sgurr nan Conbhairean. I demolished a good chunk of my food, only saving my summit apple and half of my Jelly Babies for the walk back - this prove to be a fatal decision (for the apple!)...

As I was eating my lunch the views seemed to open up - much to my relief! 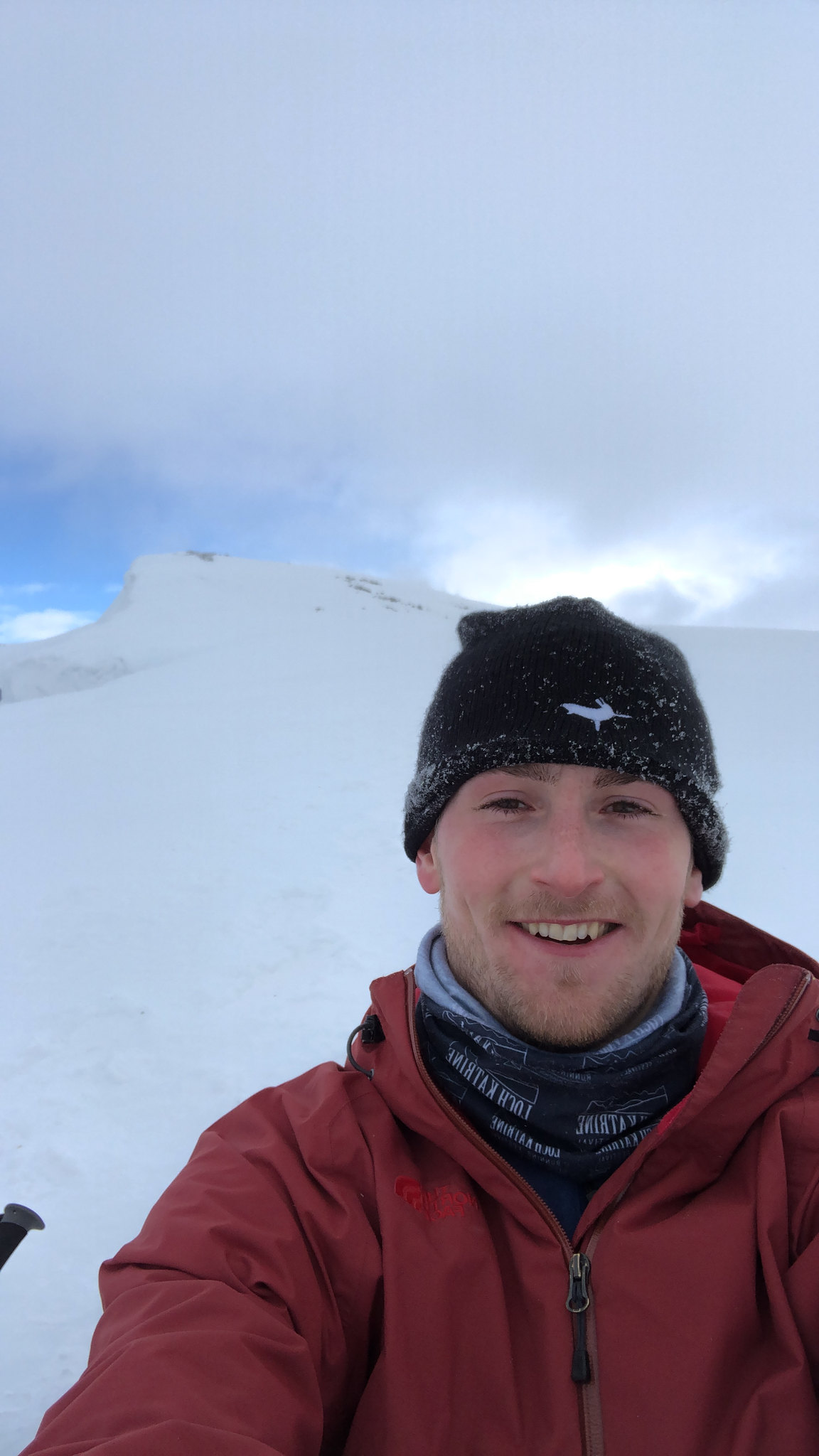 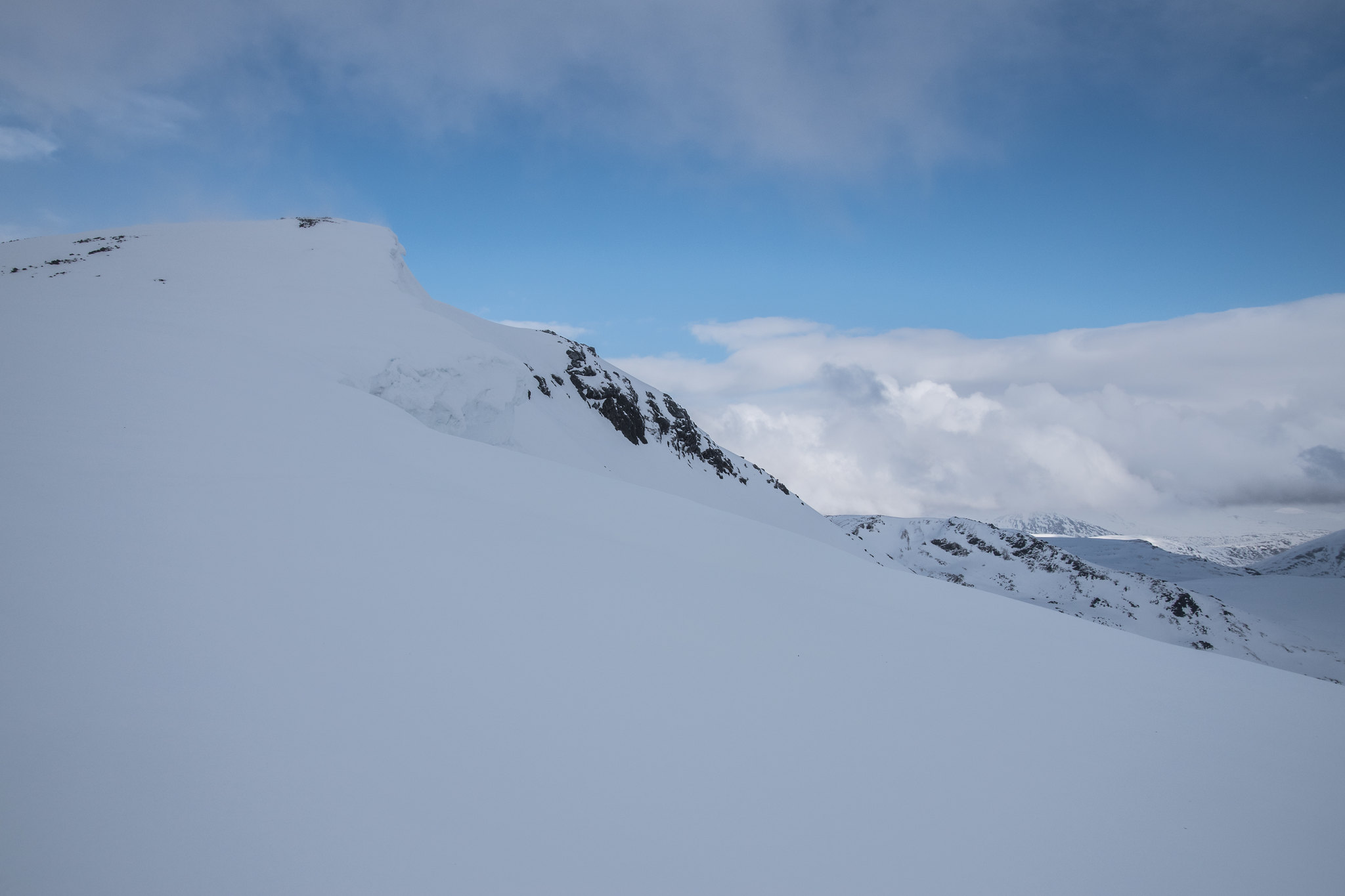 The walker I had seen earlier has still not passed and I was sure they should have been closing in on me so started to worry for them slightly. This is a strange feeling having a sense of unease for a complete stranger and having no idea what their planned route was. Maybe they had already turned back?!

Looking back towards Carn Ghluasaid. 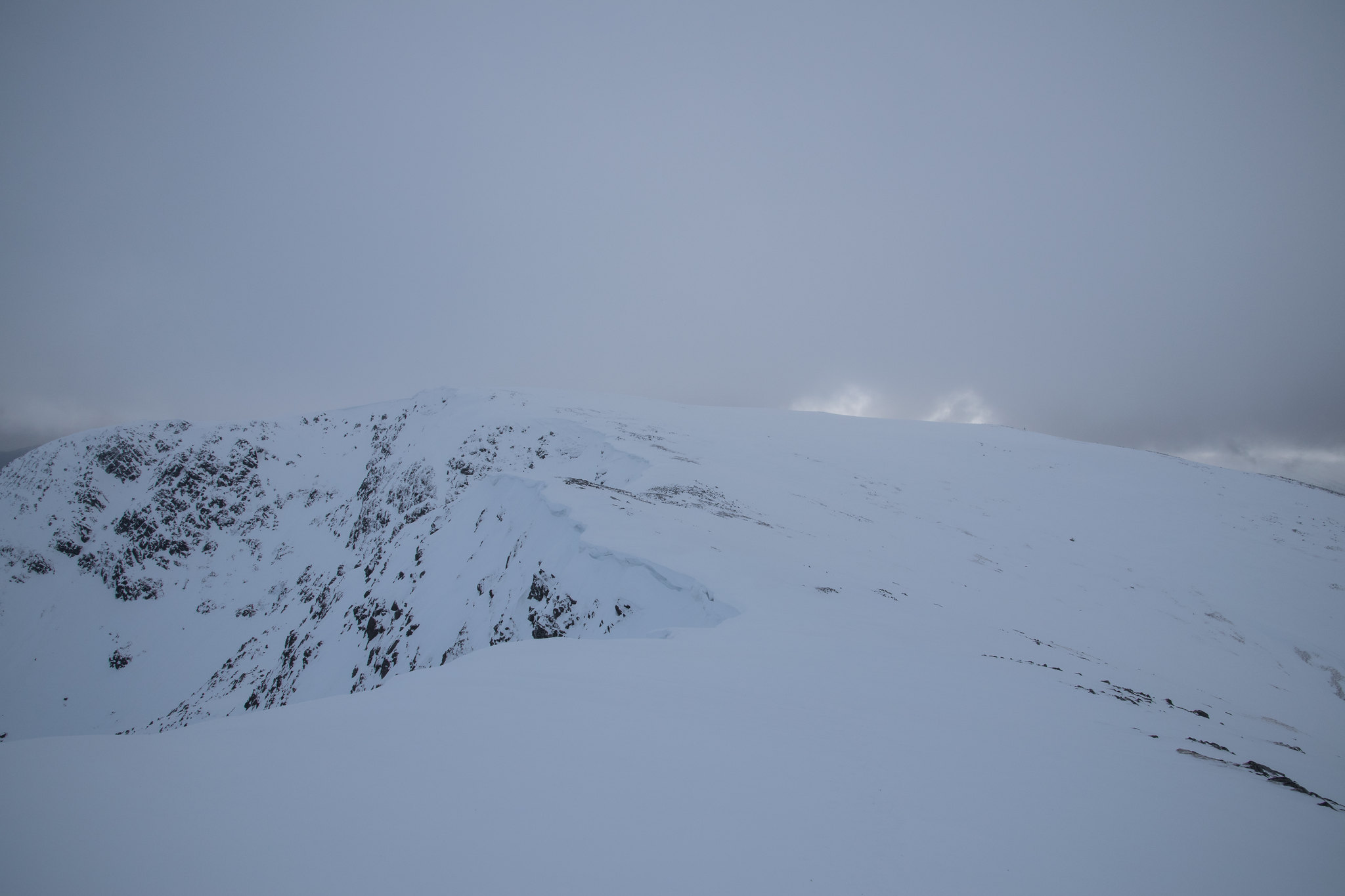 If you click on the above photo and open it up you may be able to very faintly see the figure on the right hand side of the just to the right of the second blob of clear sky. After zooming in on the camera to confirm it was indeed the bright jacket that had been following previously this put me at ease. They had lost some ground (maybe stopping for an earlier lunch) but were appeared to be going in the same direction.

After packing away my lunch and taking off some layers I raced myself to the top of Sgurr nan Conbhairean by 11:15, in an attempt to beat the cloud cover incoming. 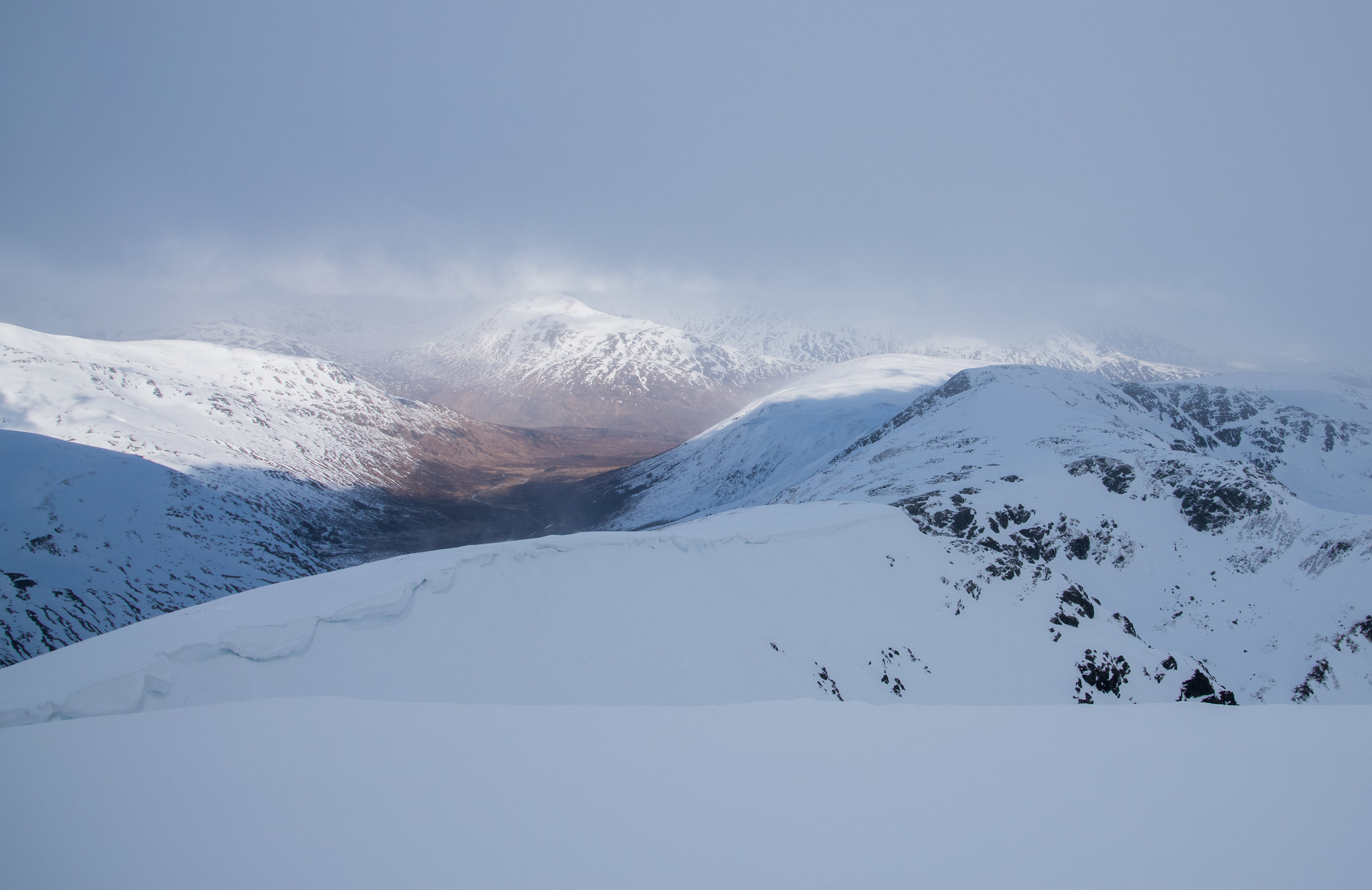 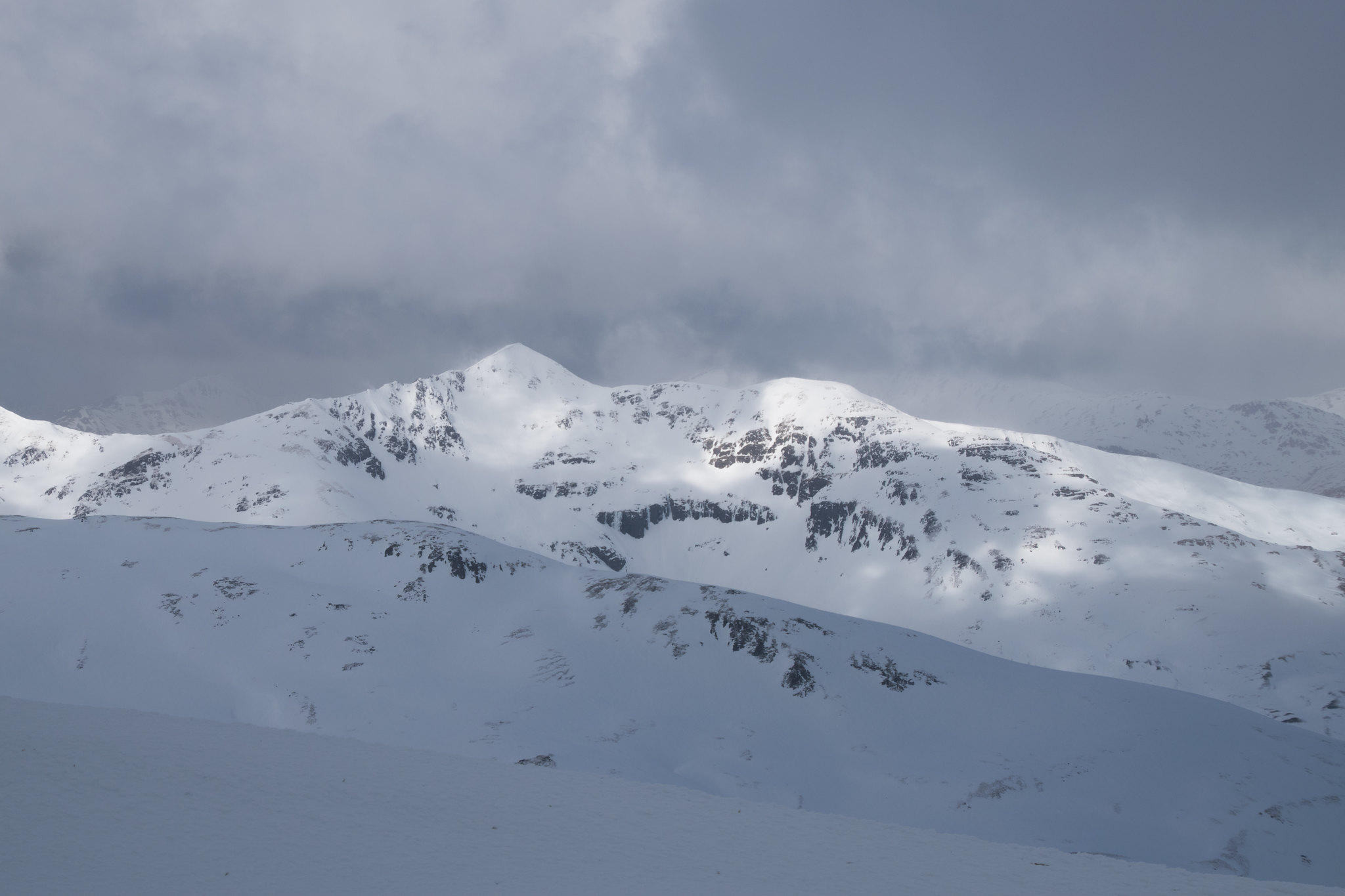 The route from Munro 2 to Munro 3, Sail Charoainn, was just over 30 minutes and the snow was solid in most places but the overhanging cornices were petrifying - thankfully the cloud base seemed to have lifted for good.

As I had already wolfed down my first lunch all that remained was the highlight of many days, the summit apple (and constant supply of Jelly Babies). My walk to Sail Charoainn was powered by the delight for finally getting around to my apple. This made one of these frustrating out-and-back sections feel less mentally draining. 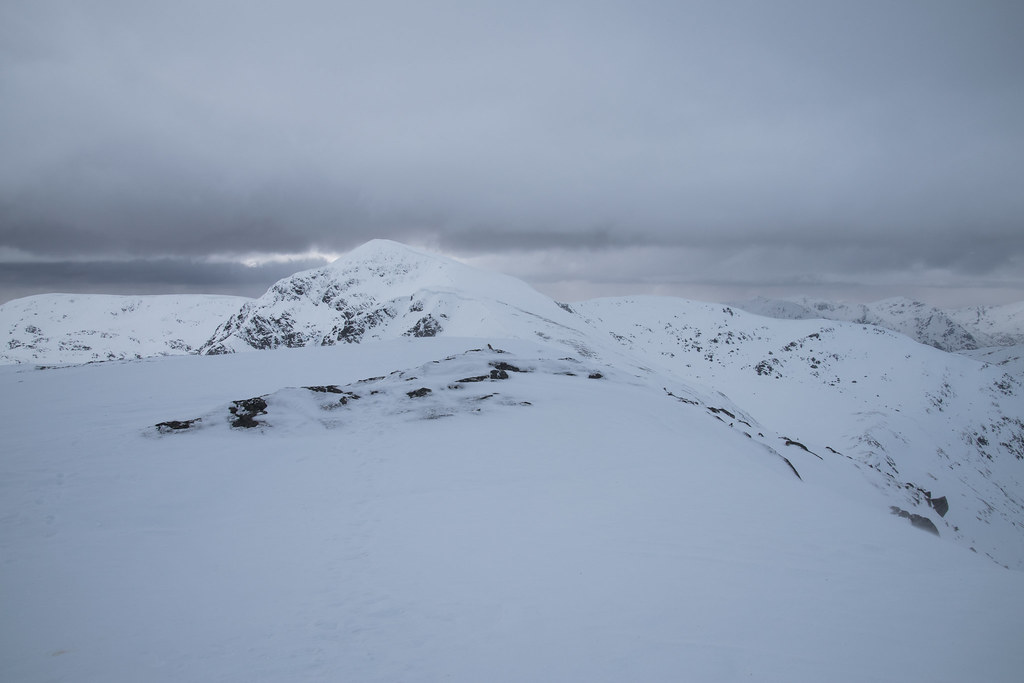 Thankfully the base of the cloud had lifted to above 3,500ft but unfortunately just as I arrived at Sail Charoainn the wind picked up

. I hardly stopped to take off my bag and decided I would retrace my steps in the hope that Sgurr nan Conbhrairean would provide a better shelter for this apple.

A bad decision out in the hills can have disastrous consequences and thankfully this was only the end for one of my five a day...

Better view of the return towards Sgurr nan Conbhairean. 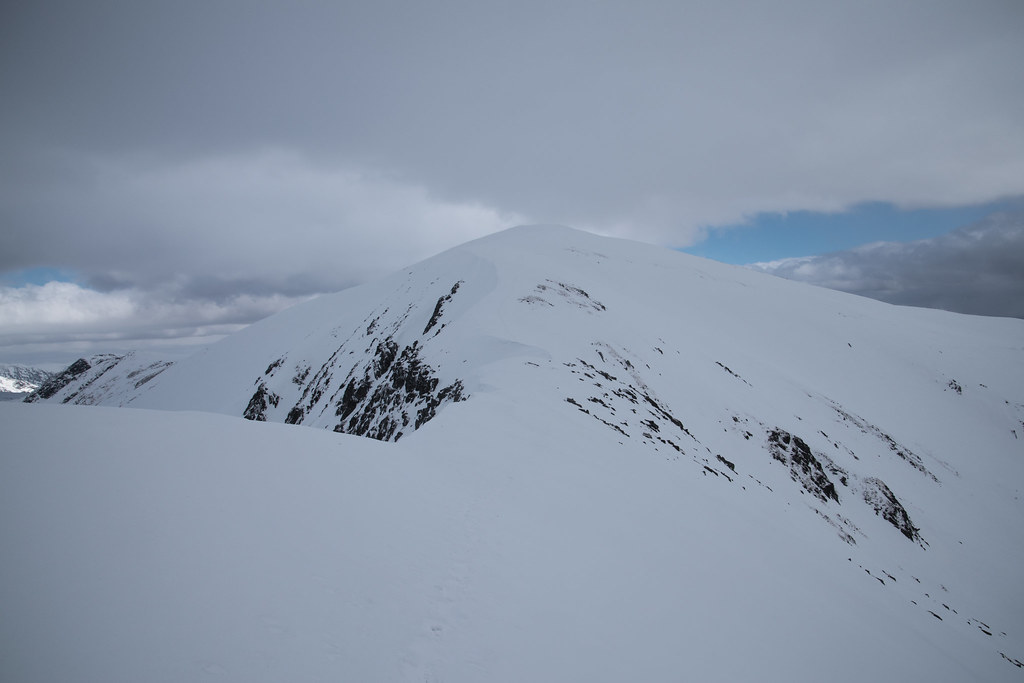 I contoured wide around Sgurr nan Conbhrairean avoiding as much repeat climbing as possible which made the going difficult on my ankles. Although on a relatively speaking steep section I dug my crampon in, planted my axe and used as a solid base to tie my bag and camera to. All that remained was to get out my apple and enjoy. Tired minds makes tired decisions, and I appeared to forget that apples are relatively football like and when placed on an icy slope tend not to stay put...

On the west side of Sgurr nan Conbhrairean at about 1100m the apple made remarkably swifter progress than I would off the hill - I assume it came to rest somewhere near Toll Easach.

Might be an apple down but I was 3 Munros up, now on 98 and the views were tremendous! 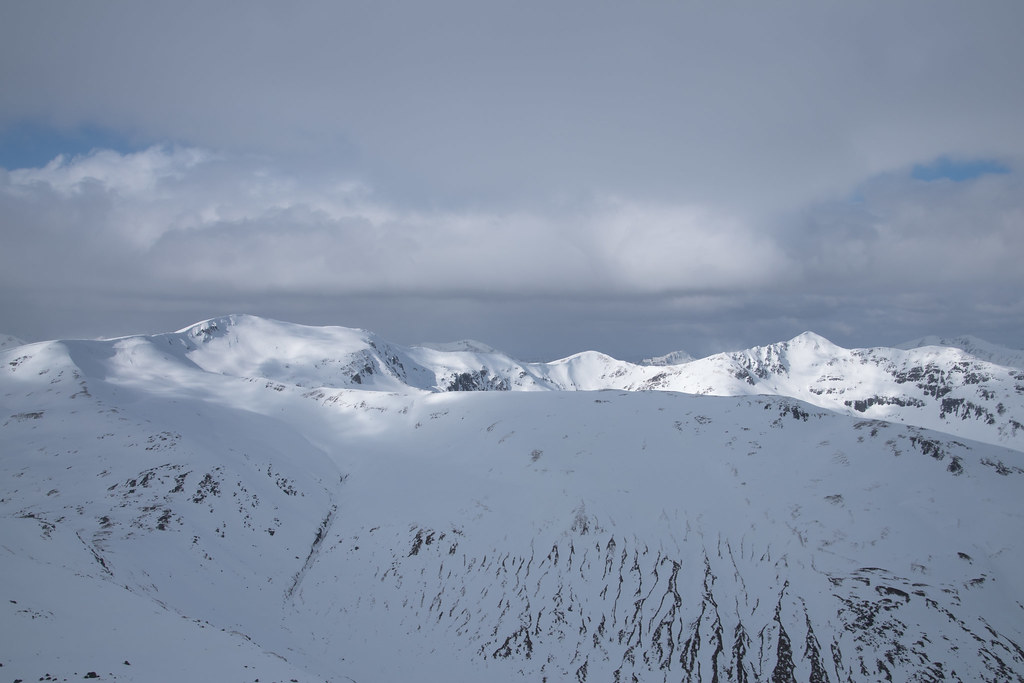 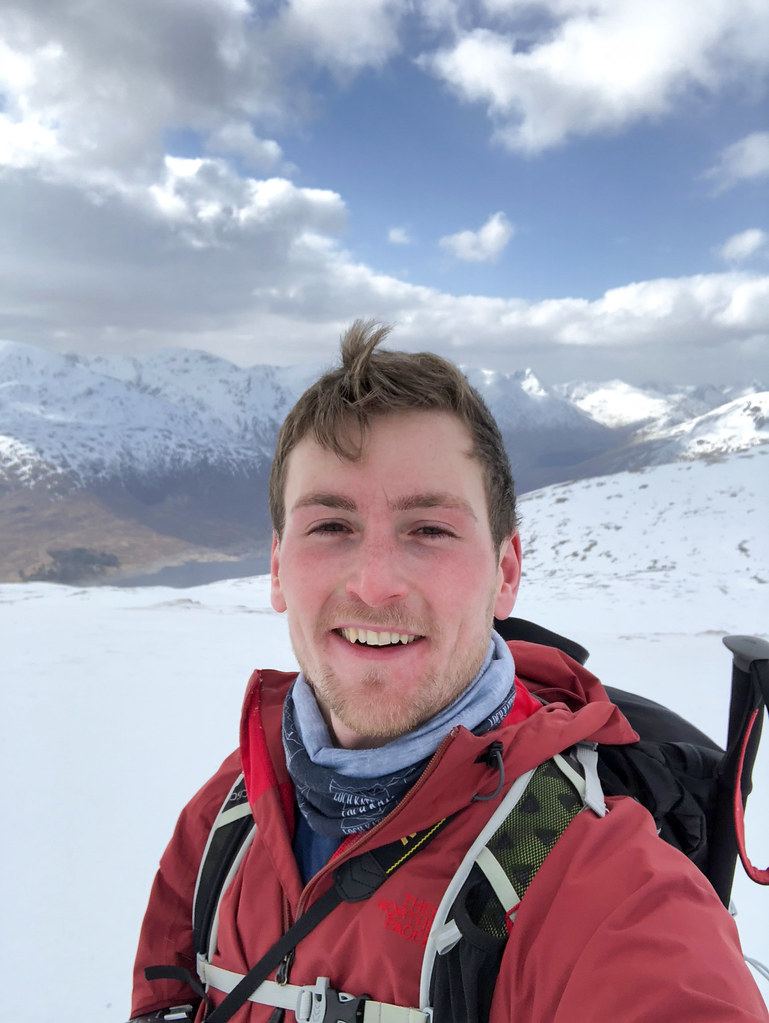 The risk of avalanche was low which meant I now had a decision to make, the quick or the longer:
1) Straight down; or
2) The recommended Walk Highlands ridge.

Sgurr nan Conbhairean on the left and Carn Ghluasaid on the right. 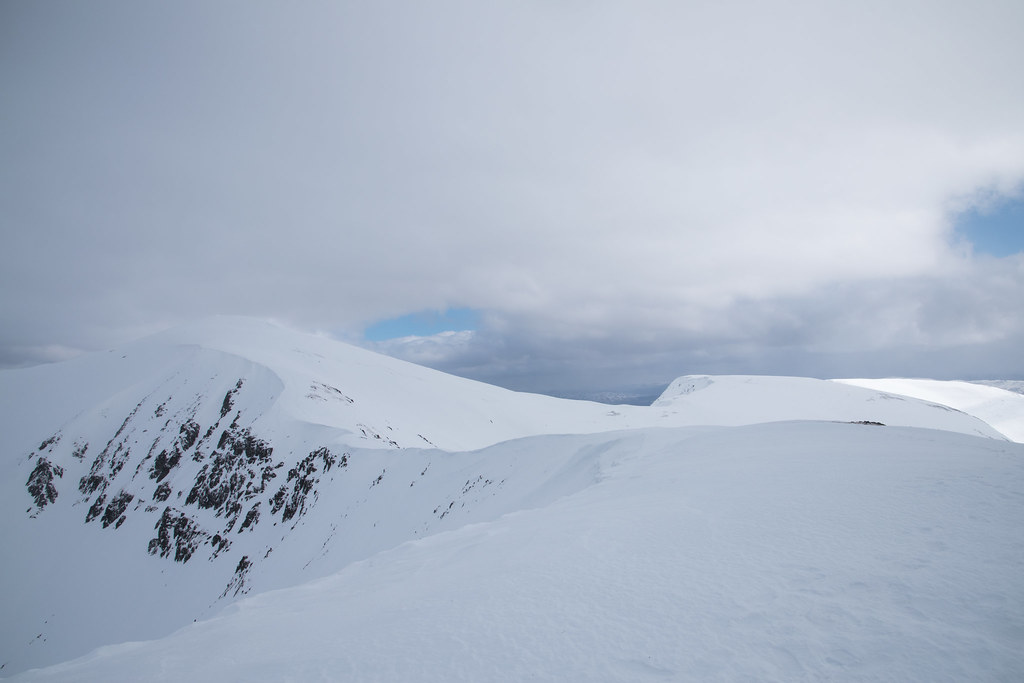 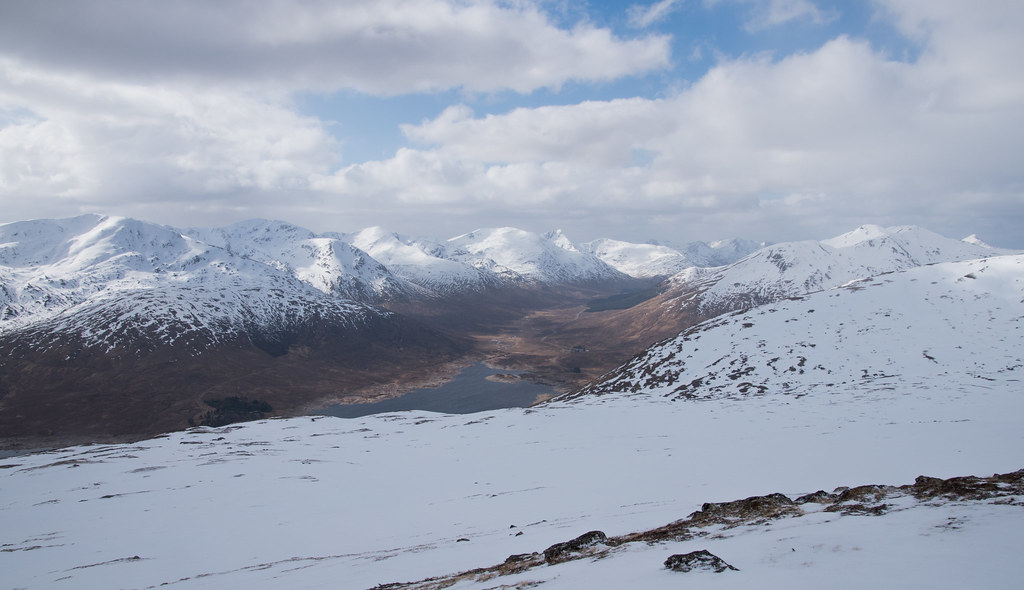 Final cornice of the day before descending. 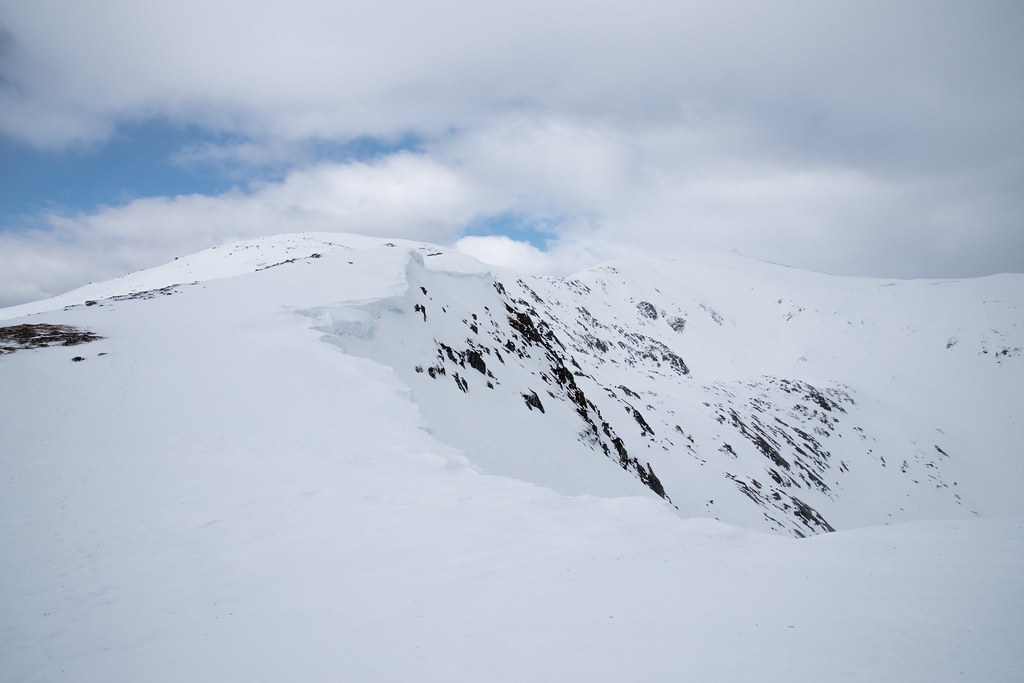 The route back along from Drochaid an Tuill Easaich towards Meall Breac was arguably the most enjoyable section of the day and I am glad I opted for the longer route. Only mistake I made was taking the crampons off maybe 200m too high - ending up having to complete endless zig-zags on icy heather just to avoid the remaining scattered snow / ice patches. If I had to estimate I think this probably added on 30 minutes to my intended finish time - it was brutal on my knees 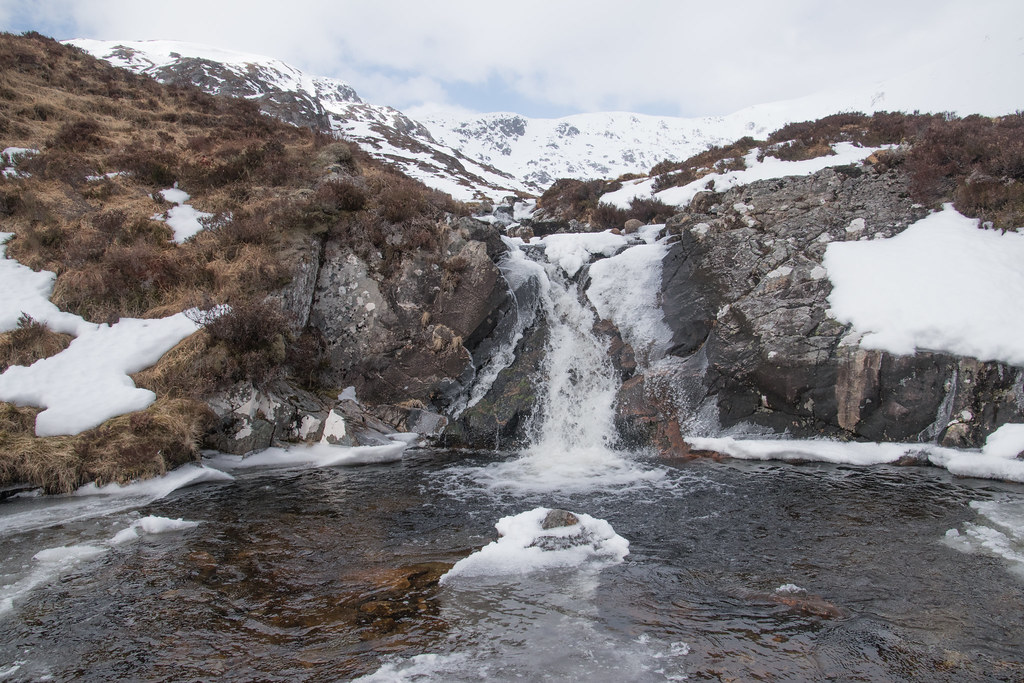 Even once back down on the path heading towards the car park the wind was still battering my face. By some saving grace the sun was providing some heat so it did not appear to be too much off an issue. That was until I got my boots off, into some clean and dry clothes and sat down in the car. My face was on fire, almost certain not from the sun but a health does of wind tan as I called it at work on Monday.

Wind tanned and dreading the drive back to Range Rover central - Aberdeen. 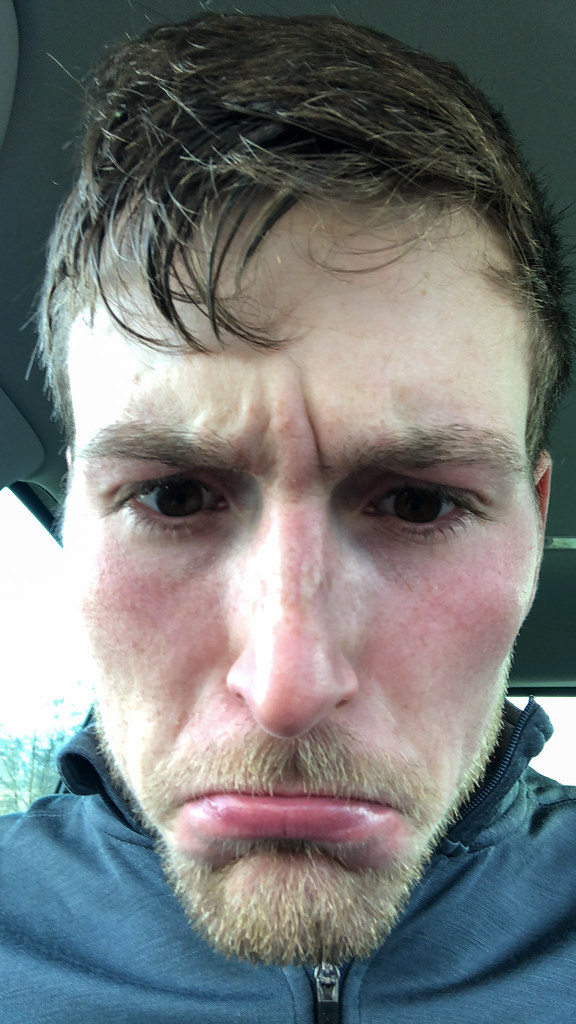 Although it started off rather challengingly and the wind was a nuisance throughout it was another great day out in the hills and I am glad I did not have to bail back to Aberdeen before sunrise - next year I am getting winter tyres!

This is an area that I am looking forward to visiting in the summer, without giving away too many secrets we (Andrew Cubed) have another epic adventure lined up for out here that could see a good number of summits being trodden over