Decided to do Luigi's first munro in slightly more adventurous style. Arrived to brand new Abyssinia bothy in the evening from a crazily packed streets of Glasgow on a sunny day.
It is a very easy 6 km walk through Glen Kinglas from the bus stop at Rest And Be Thankful (2.5 km part on the busy road not too pleasant).

Beautifully rested at the bothy (tried Buckfast from fellow bothy dwellers for the first time in my life - very surprising taste) we set off leisurely at 10 am embracing the vision of the nonstop rainy day.

First 3 km walking through Gleinn Uaine along the stream, the ground on the left was less boggy and surprisingly easy to walk on thanks to some sheep paths, several stream crossings as the stream got smaller and smaller and ground boggier. After 3 km I was trying to locate a path between Beinn Vane and Glas Bhealach (the saddle between Beinn Chorranach and Beinn Ime), but unable to find it except to one cairn.. so we just headed up the hill. The navigation got trickier due to low clouds and occasional whiteouts, but it's quite straightforward - just battling through the corries and patches of remaining melting snow. Reached Glas Bhealach at 12:00 with generous stops to catch breath and bit of lunch before we immersed in the clouds fully.
From Glas Bhealach it was just straightforward to the summit, it got bit steep and rough, using hands occasionally, but nothing too serious and generally feels quite safe (or at least it does to me). Luigi was losing hope at some points and we were taking breaks, but finally reached summit in less than hour, also found a nice path from the middle of this part to the summit, which helped a lot to get through the rocky terrain.

At the summit we were welcomed by icy bits of snow instead of rain and met two surprised guys asking us where the hell we just came from.

Luigi was in a special state of mind, just seconds ago contemplating his death on the slopes of Beinn Ime and now reaching the summit took him by surprise. Usual first time baggers kind of thing I guess.
// When off the hill, Luigi said that while sitting on the rock just couple meters from the summit and contemplating this endless suffering, his death of heart attack and me crying for him forever, there was a bit of a break in the clouds and as I shouted to him that we're on the summit, he saw Jesus briefly. //

The descent was quick along the usual path. Luigi started talking again, flooded with adrenaline and happiness. I had a flood in my boots and at this point we were drenched and any hopes for attempting to do Beinn Narnain were blown away by freezing wind and we were happy to be sheltered by the Cobbler. On the way down Luigi fell into bog knee high, fortunately the gaiters saved everything and he enjoyed a pint at the pub in Arrochar in style, I had to take off my soaked boots. Ehm style.. he was wearing his pyjamas cause his trousers got soaked.

Overall Luigi is very excited for next adventure and said he finally understood what I ment, when I said, that it's not much more difficult than Beinn Dubh (Luss) - which we did couple weeks ago, but might be a bit crazy.

Re: Beinn Ime from Abyssinia Bothy 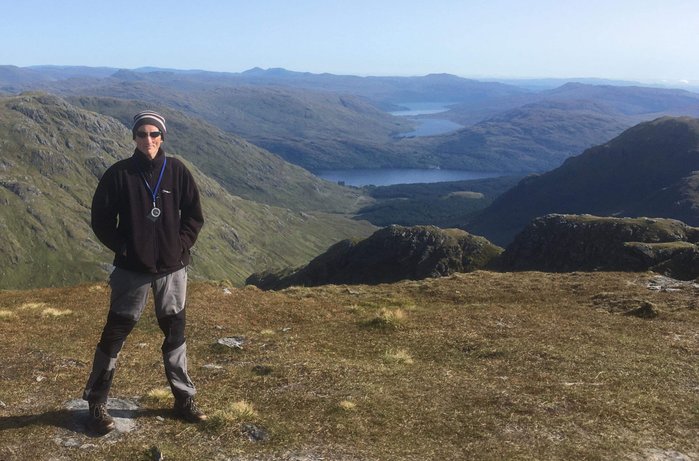 Did this today except our decent was to Butterbridge.

What a great route away from the mobs piling up from Arrochar. Great views of lochs Lomond , Arklet and Katrine at the top.