I've driven along the A85 countless times and dismissively looked at the hills next to Ben Cruachan. However, the weather forecast was half decent and I was in the area, so rather then scoot along the A85 back to Glasgow I took the turning for Stonmilchan and parked up at the wee stone bridge over Allt Mhoille.

As I headed up the road toward the farm I'd a short conversation with the farmer as he headed out to tend his cattle. He keeps a herd of Highland cattle and there were some young calves about. "Give them a wide berth and you'll be fine was his advice". Given the size of the horns on these beasts I'd every intention of giving them a wide berth!

The Landover track made for reasonable access, but these tracks do leave an ugly scar on the landscape.

After the track almost doubles back on itself I spotted the path that leads up the shoulder of the hill to the ridge. The ground was reasonably steep and it was not long before I was either walking across snow patches or the ground was frozen. Kilchurn castle, built by the Campbells to help force the MacGregors off the land, seemed almost camouflaged from this height, the brown colour of the stone blending with the brown vegetation around it. 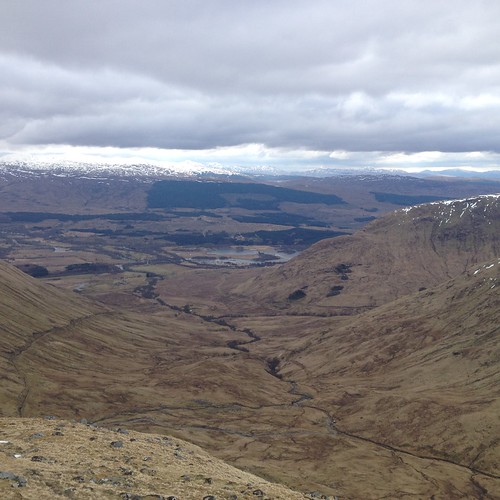 When I hit the ridge at 896m the weather had closed in. It was not raining, but the white of the cloud that was surrounding me blended so neatly with the white of the snow that for a moment it felt like I was standing on a pin head and all around me was just cloud. I'm not sure if it was my eyes that adjusted or the cloud thinned a little but after a minute I could distinguish between cloud and snow and attentively worked my way forward, making sure I did not venture too far to my right as it was obvious the ridge was corniced in this direction.

Soon the cloud thinned further and I could see some rocks popping out of the snow which acted like bread-crumbs leading to the summit. I have gotten into the habit of keeping a note of how long it should take me to walk from point A to point B, and with the poor visibility this was a good guide as to how far I needed to walk from the 896m point to the summit. The "bread-crumbs" took me to the summit, but the cloud did not lift so with little to see I took a snap of the cairn and headed back to where I'd just come from. 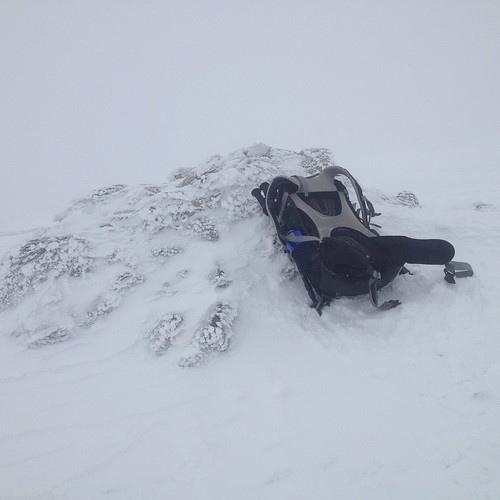 Near the 896m point I met a guy who'd just come from Bein Eunaich, and after exchanging a few pleasantries we headed on our opposite ways. 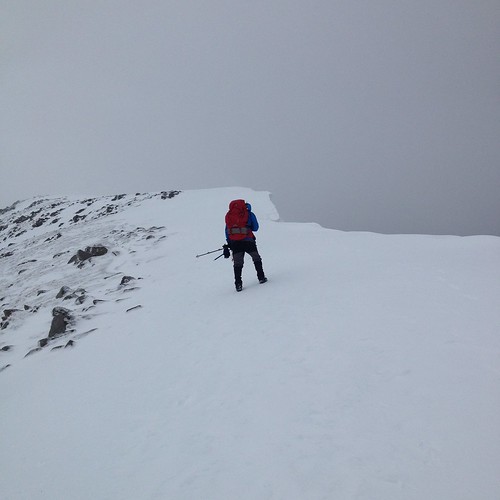 As sods law would have it as I descended toward the bealach at 728m the cloud began to clear. There were a couple of big birds - ravens perhaps - coasting on the wind, before one of them folded its wings back and barrel rolled. It was an amazing sight. I can't think of why a bird would do this apart from it was having fun. 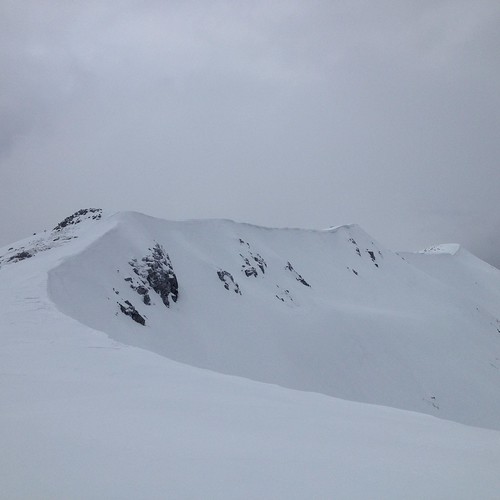 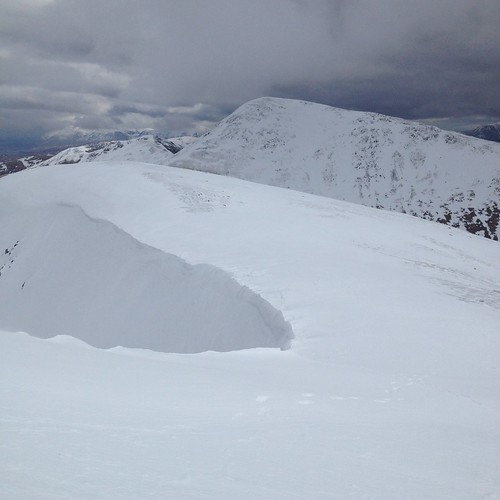 The downside of the cloud clearing was I could now see where I needed to go, 261m of ascent

However, the views started to make up for the hard work.

The views across to Cruachan were fabulous. 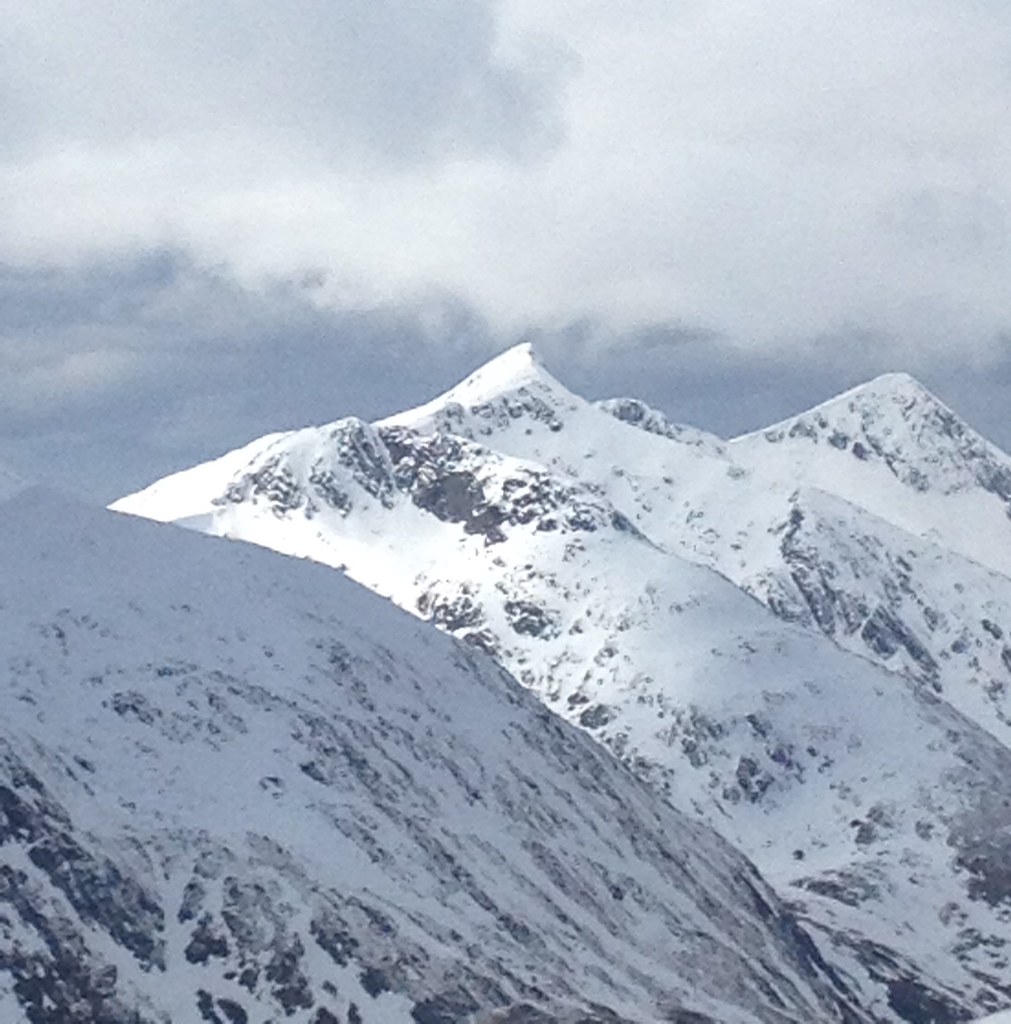 I headed along the broad ridge to descend. 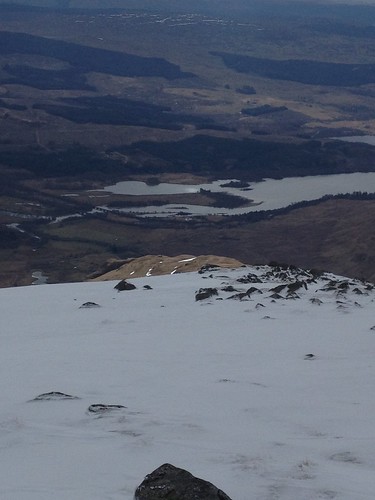 I eventually reaches a spot where I decided to head down the steep side of the glen. Plenty traversing took the worst out of it and before long I was back on the landrover track and then back at the car.

In my opinion there is no such thing as a borring or bad hill in Scotland. They all have their own unique charm. The walk from summit to summit is nice and the views over to Cruachan fantastic. A great wee day out.