A reasonable day to tackle a hill that I had slept at the bottom of (in the bothy) for 25+ years, yet never climbed!

We decided to take on an unconventional route into the hill in that you can approach it from the Red Stables at Loch Bad an Sgalaig or from Victoria Falls. There is a certain logic to this alternative approach where you take a path off the road (A832) just east of the Loch Maree Hotel and before you cross the River Talladale, in that you approach the hill from the north and you ascend the shoulder with relative ease at Coire Loch na Geala and thus taking on the whole ridge from the northern end. The walk in is over broken ground but if you stay high above the River Talladale you climb steadily and keep relatively dry feet. You climb steadily up towards the ridge and the route onto the ridge is very straightforward.

The northern end of the ridge is broad and flat with occasional outcrops of rock that mark higher points on the ridge. You start the ridge at 682 metres and this first part of the ridge rises slowly to 702 metres. You are then faced with the next climb to the summit ridge at 822 metres and the actual summit at 855. To gain this height there is little scrambling more just picking your way over the rock to the relatively exposed summit ridge.

We tackled this all on a clear day, but with a regular wind between 25 and 30 mph from the south-west, however on the summit it was probably nearer 45 mph and we were glad of the shelter stones that provided some relief over a late lunch. However as we left the summit, a huge blast at over 65 mph came through and we all dropped to the ground as standing was impossible. It only lasted a minute or so, but as strong winded fronts go, it was quite dramatic!

Once down on the lower ridge we decided to take the western slope of the hill down to Loch na h-Oidhche (Loch of the Night) basically named as the fishing is so much better in late evening light as opposed to the middle of the day. From there we followed the track down to the boat shed and then crossed the outflow burn from the loch over the stepping stones. It is a burn with a rather unusual feature in that it splits as it falls downhill, which is a very uncommon occurence. It is believed to be man-made to help feed the hydro lochs at the bottom both at Garbhaig and at Bad an Sgalaig, but it all looks very natural.

After crossing the burn we turned off the track and yomped over the rough terrain for 2 km to the top of the track at the northern end of Loch Garbhaig, then down the well established track to the road where a car had been parked. 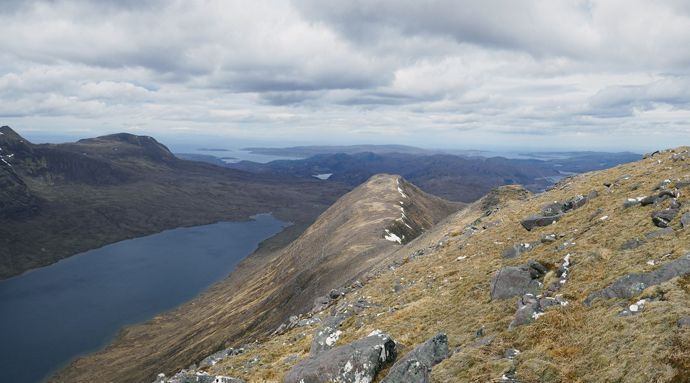 The lower ridge of Beinn an Eoin looking over to Gairloch 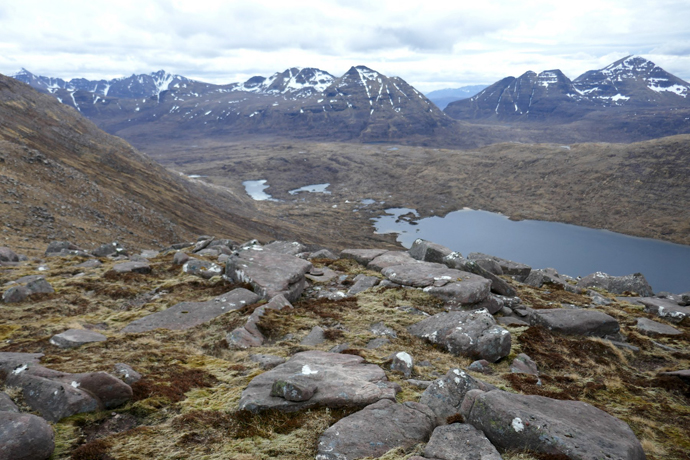 Loch na h-Oidche and Gorm Lochs over to Beinn Alligan 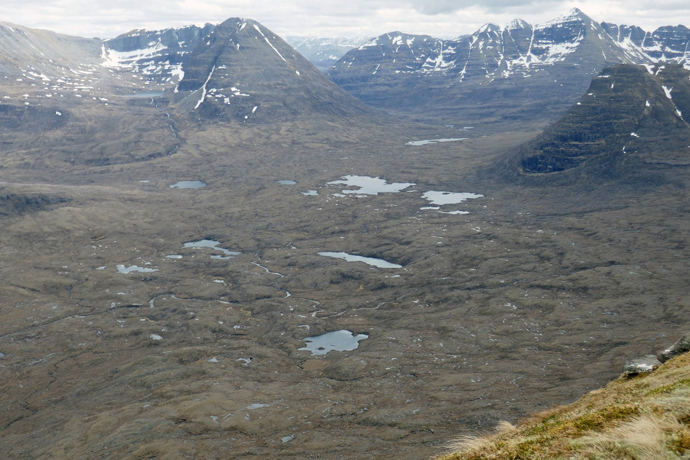 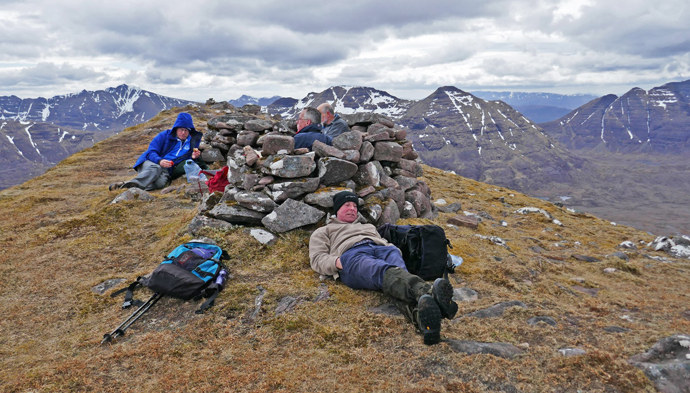 Summit Lunch with as much shelter as possible

Re: Beinn an Eoin via Glen Talladale and Strath Lungard

Great pictures and interesting route. I was there on a winter day on the route from the north and that felt like a long walk in and out. Would like to get to Baosbheinn before hanging up my boots so might try the way in from the east. Always on the lookout for shortcuts these days!

Re: Beinn an Eoin via Glen Talladale and Strath Lungard

The easiest route is most definitely to go up the Victoria Falls road and then yomp across to the track that leads from the Red Stables, we have done that many times when we have used the bothy. It can be a wee bit wet after you leave the good track so keep to slightly higher ground and you hit the track from red Stables just before the Stepping Stones. Rather than crossing the burn head up stream and you come to the split and I think there is a bridge there, alternatively, head up to the boat house on Loch na h-Oidhche and then walk over to the outflow and there is a form of crossing at that point and approach Baosbheinn from that end.

It is a great hill too and makes for a full day in the hills. Not difficult on the top.

If you like to cast a fly, retrace your steps and rather than dropping back down to the boat house go off on the other side of Baosbheinn and drop down to Loch a' Ghobhainn (Loch Gowan) for a cast in one of my favourite brown trout lochs in Scotland. The setting at the bottom of that hill is wonderful and there is a nice sandy beach on Loch a' Bhealaich to sit and have your lunch.

You can then walk out to Shieldaig, but you would need a double car arrangement for that to work.