Four of us, now experienced walkers, and OCD box-tickers & walk collectors, took a sunny late April jaunt down to Galloway, to take on the MOGT.


This is the first report I’ve written for Walkhighlands, though I’ve been a member for some time. I noticed that there was no available reports for this walk, and in the past I’ve found the contributions by other users very helpful in making my decisions for where to go next, so i thought it was probably time to pay it forward. As a walker, i focus a lot on the logistics of walks, information that can sometimes be hard to come by in guidebooks, so i hope this format helps

We drove down from Glasgow, a pretty straight shot down the A77, and ditched the car in a side street just outside Kildrochet. I would always advise that you ask permission from anyone in rural areas to leave your car near their property, just as a courtesy, particularly if you're going to leave it there overnight. We hopped in a McLean's taxi to the very southerly tip of the peninsula, to the lighthouse. There are no buses that come further south than Drummore (5 tough miles from the lighthouse), so if you're looking to Daywalk, this is your only option. Pleasingly, taxis are very affordable in this part of the world; so I’d suggest you cough up a few pennies and your feet will thank you later.

The lighthouse & surrounding area are stunning, with views to Northern Ireland & the Isle of Man on a clear day - to be honest, it would have been nice to end the way there, rather than start it. So many of Scotland's great walks seem to end in bizarre car parks and alleyways that finishing somewhere that nice would be great. To start our walk, we followed signs for Lagvag point, erroneously believing it to be the southern tip of the southern tip. It was not. Starting the day with a vertical ascent was about as smart as it sounds. We departed around 11am on the trip properly. 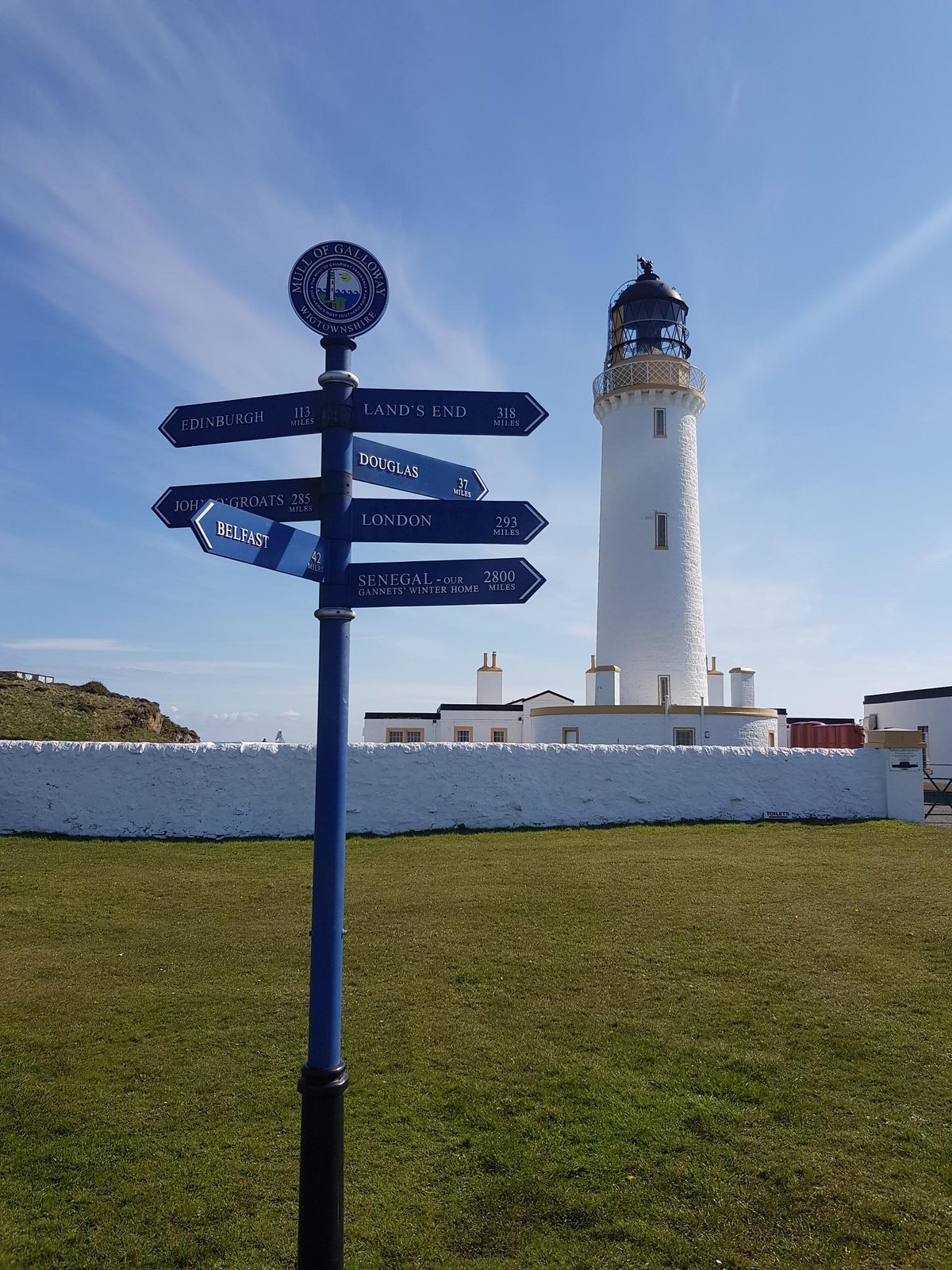 The lighthouse has a cafe & WC facilities at it, and the start of the path isn’t hard to find. We debated the mileage markers for a while - not sure that the West Highland Way is as far away as this, and set off. The first 5 miles were beautiful, albeit treacherous underfoot - uneven ground a lot of the way, and it’s the earliest in a walk I’ve ever felt my feet begin to ache. I am still not sure whether i did the right or wrong thing wearing my heaviest Gore-Tex footwear - there was a lot of mud and bog to traverse, but on many of the sections where you have to hop between rocks, nimbler approach shoes would have been a much better shout. Perhaps if you have gaiters, this might be the time for them - i normally don’t see the point, but there's equipment for all seasons. 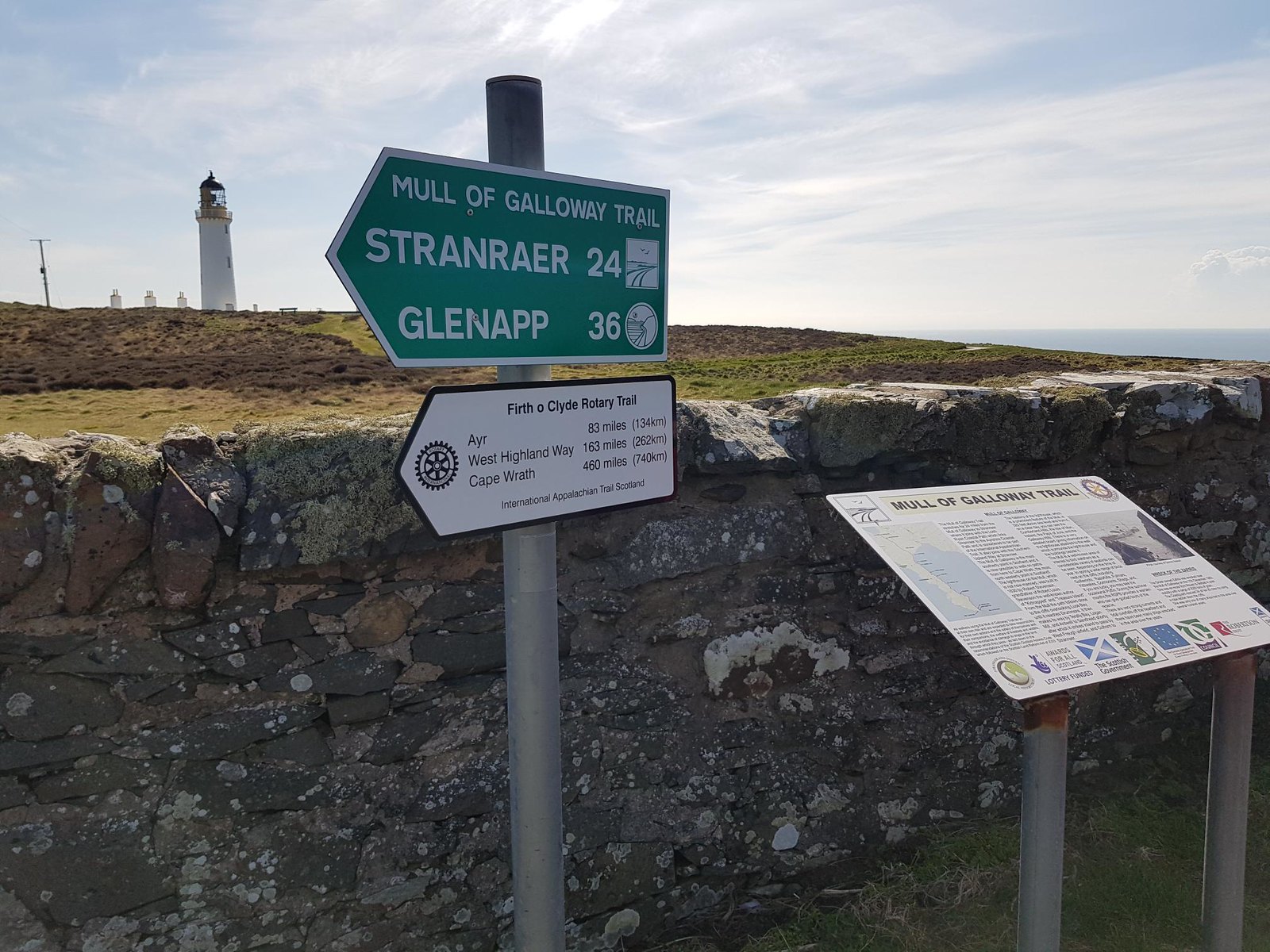 We reached an early planned lunch stop just outside Drummore - sadly, the Clashwhannon Public House kitchen was not open - I’d messaged on Facebook to check their opening hours, but they had changed them in the interim, so a cereal bar based lunch had to suffice. Drummore has a cafe in it, but I’m never keen on retracing steps. Just be aware, there isn’t another stopping point until Sandhead, some 10 miles away.

The track alternated between road walking, walking on the side of road architecture, and some rough ground. The A77 is never far away, which is a bit disappointing, but where possible, you skirt the side of fields. Hard going on the feet, and hard to make progress - i really felt we were pushing our pace, but i don’t think we managed to average the 3mph that you aim for.

Sandhead has a pub that i believe serves food, or you could stop at if you were taking a different itinerary, but we pushed on. The final section has around 2 miles of leg sapping sand dunes as you look over the firth - absolutely exhausting. This was my first walk of the season and i definitely wasn’t at peak fitness, but all the same, this was a hard 20 miles compared to recent stints in the Borders & Fife.

We hit the B7077 at around 6.45pm, and walked the couple of hundred meters back to the car. We stayed in the North West Castle hotel at Stranraer, which was perfectly fine, if a little old-worldy. Bit too many tour buses. Prawn Cocktail & napkins kind of place, if you get my drift. I would point out that it has a curling rink however, so if you do this walk in winter time, that’s an added attraction. We ate a dinner at the Craignelder hotel that i can't recommend high enough - giant, walker-sized portions of breaded brie & pork belly, and took in a few shandies at the Customs House - sort of a Wetherspoons meets a disco - I’ll let you experience that one for yourself.

We took the car back to the previous day's parking spot, and re-joined the route at around 10am. The first part of the morning was 80% road walking, and 20% walking through an extremely bumpy muddy field of cows, where you hug the fence for any semblance of a route. Passing over the intersection with the Southern Upland Way, you enter Stranraer - but note, you don't actually go past any shops, cafes or restaurants, so you will need to stock up on supplies beforehand. There is a snack van on the side of Loch Ryan, but it closes at noon, not particularly walker-friendly timing.

Note also that the Mull of Galloway Trail, & Loch Ryan coastal path, are signed differently. When coming down Ladies walk, the Galloway Trail will take you all the way back to the Custom's House & your scene of shame from the night before, where the Loch Ryan Coastal path will begin, and you'll immediately walk the same 300 metres of pavement for no apparent reason or gain. 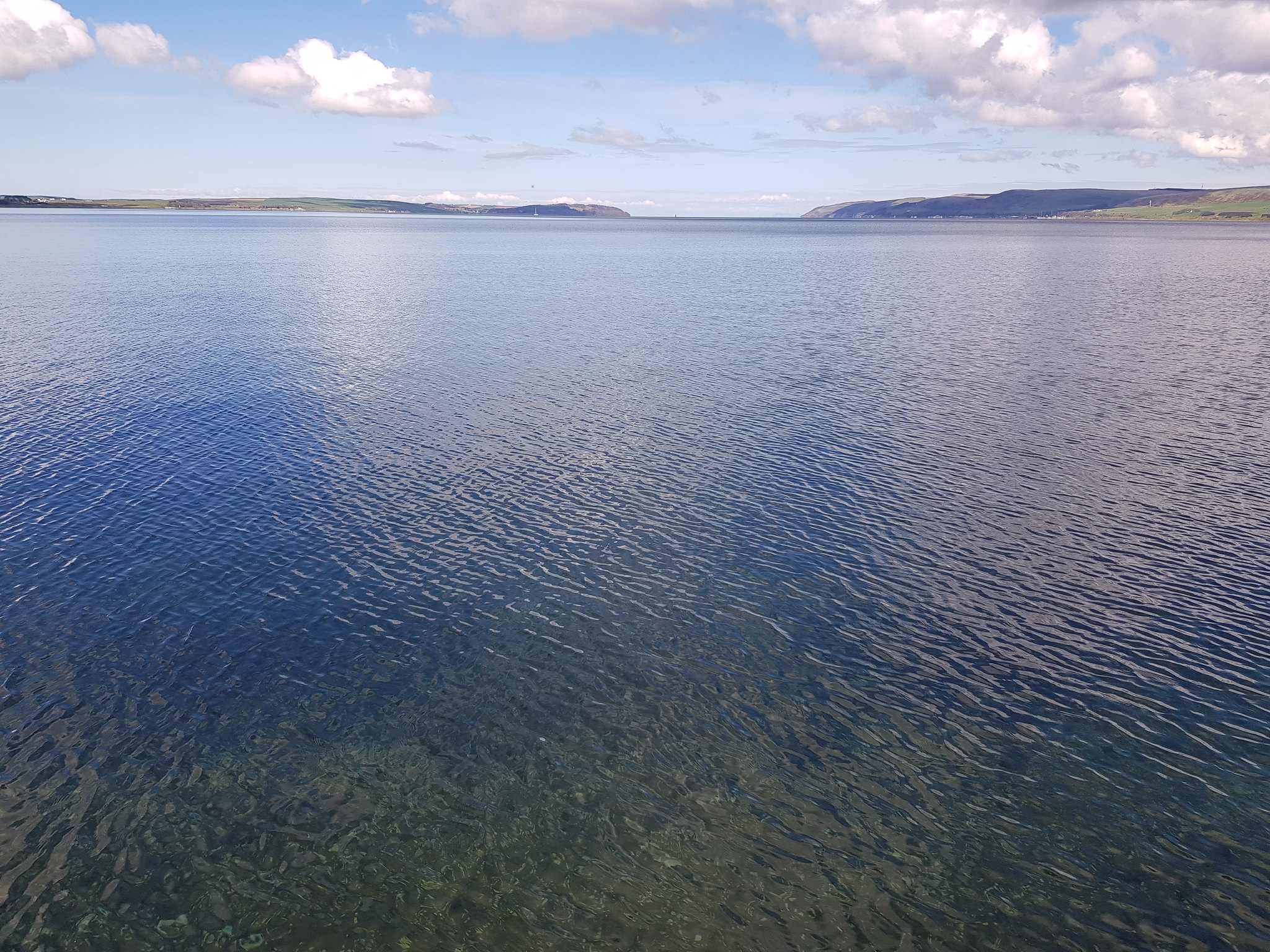 The curving route around Loch Ryan is deceptively long, about 5 miles to Cairnryan. Considering it’s beside a road, it does as good a job as possible at keeping you on quieter track and grassy side tracks, but there is quite a bit of road walking. The views are good, but honestly, Cairnryan is a bit of a non-event - again, there is no Cafe or anything here - there is a coffee shop in the ferry terminal but only for departing passengers to Belfast. I am told that staff in the Terminal will nip through to the gate and buy you a sandwich and pass it back through to you, which is nice, but it’s a bit of a faff, so we just brought sandwiches and the like.

Departing Cairnryan, finally, you go up a big bugger of a hill, on a concrete track. 'Laird's Hill' used to be the main route out of Stranraer, incredibly. It’s not that high, just rather steep, and after 30 or so miles of flat (if uneven) ground, i found my legs were deeply unhappy at the prospect of it. Also, be careful what you wish for.... 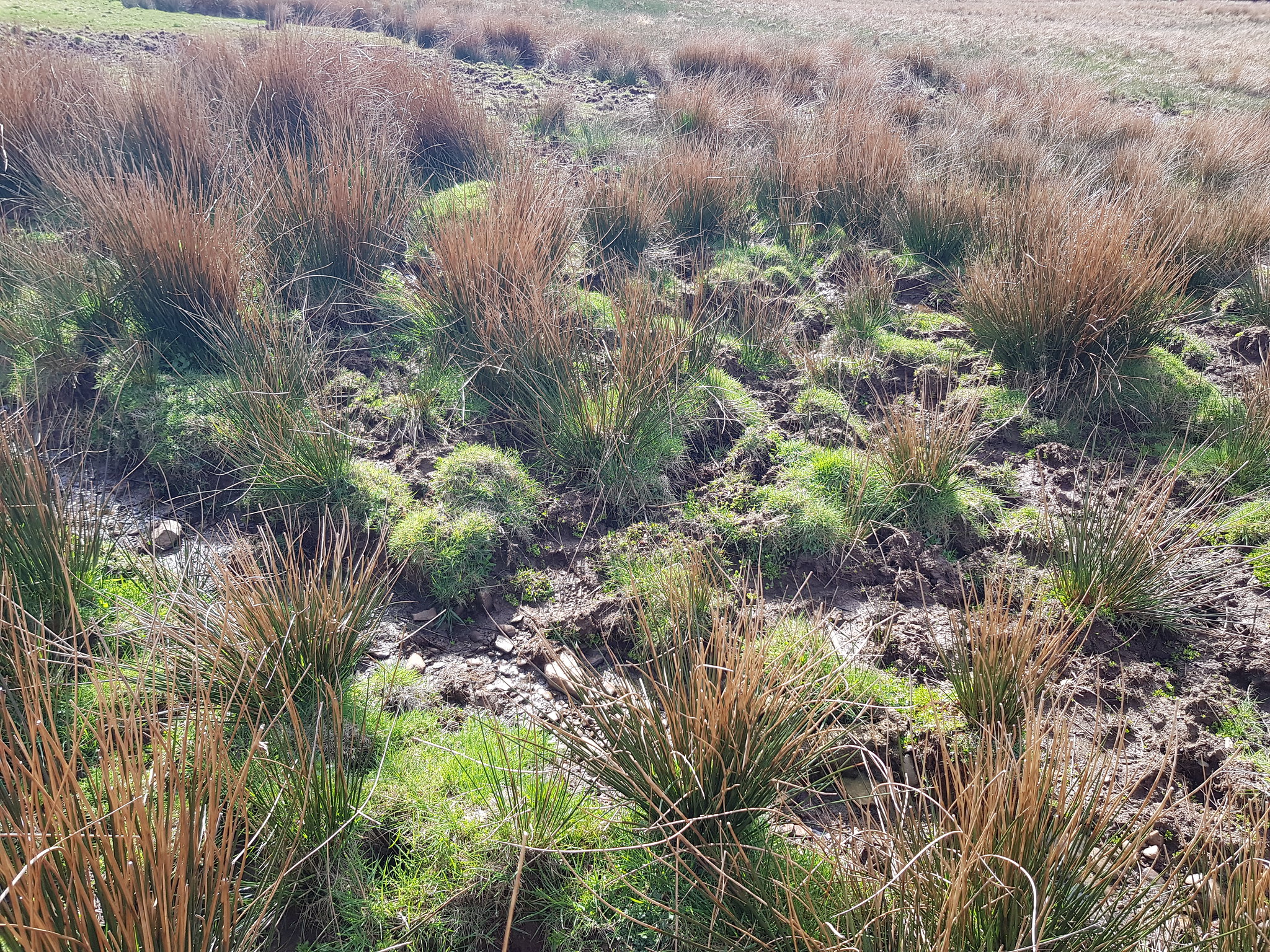 Finally leaving the concrete track, you leave yourself about 3-4 miles of some of the boggiest, wettest terrain I’ve dealt with - probably only matched or surpassed by the Arrochar to Strachur section of the Cowal Way, though I’ve heard Bute is bad too. The path is not obvious, and we were very grateful to the high quality of the GPS tracking map that Walk Highlands had created, as it kept us right. Just... keep moving your feet. Try and stand on the biggest clumps of reeds you can find to "create" stepping stones. I nearly lost my shoes to quicksand like mud on a couple of occasions. 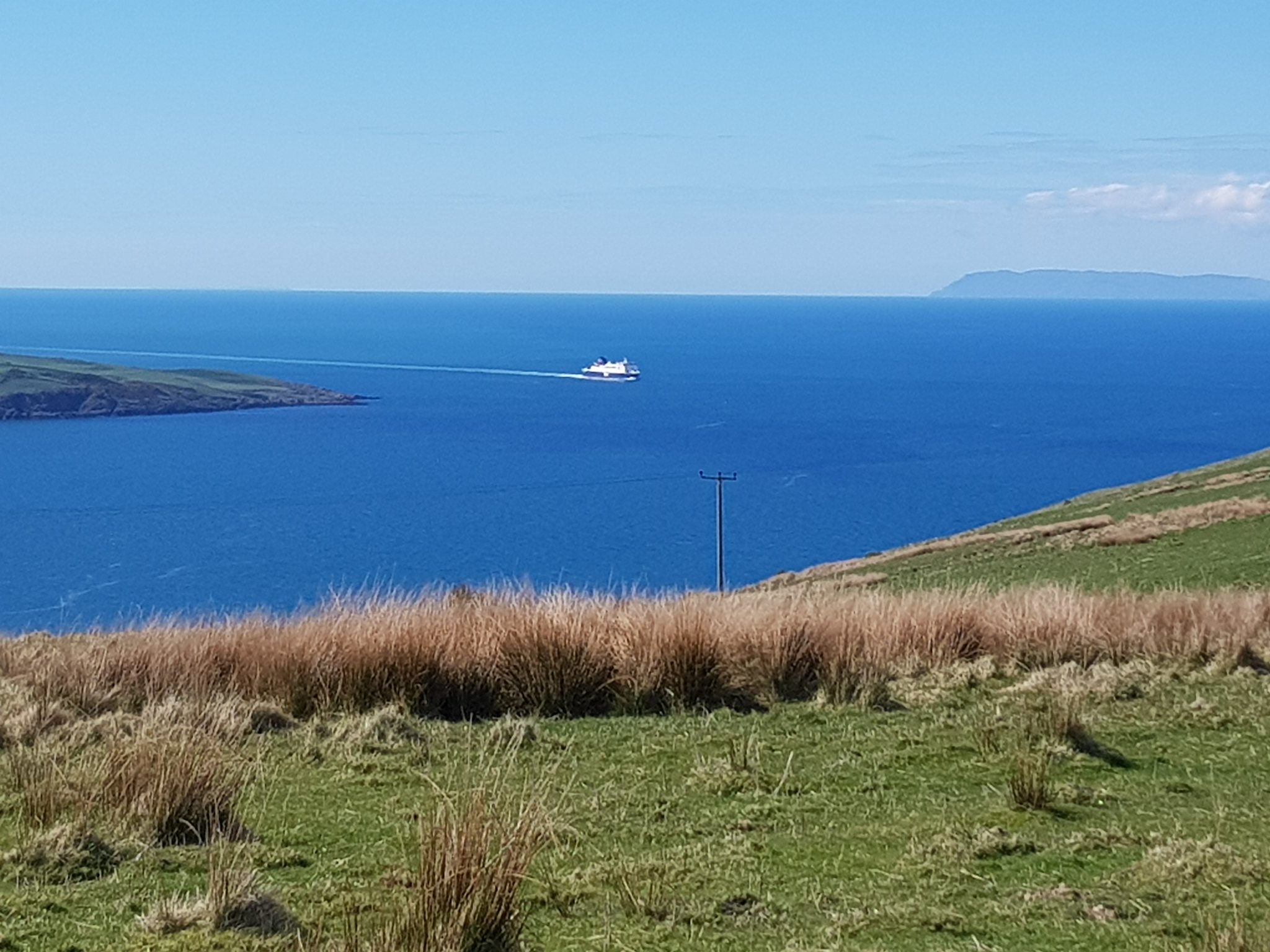 The views over Loch Ryan are really nice though, and you can see both Northern Ireland, but also the Mull of Kintyre in the distance. We finally descended, called a taxi from Glenapp Church, and travelled home in exhausted silence, contemplating having to return there one day to begin the Ayrshire Coastal Path. Because, you know, we have to.


Tips: When you are looking at this walk, if you want to split it into 2 days, I’d say we got this just about right. I don’t think you'd particularly want to stay anywhere other than Stranraer for food & drinks in the evening, as it’s all a bit quiet. Taxis are plentiful, reliable & cheap, and there’s a wider choice of everything in Stranraer than any of the satellite villages.

If you wanted to do it in 3 days, the walkhighlands suggested breakdown is probably about right, though i suspect you'd be pretty disappointed by the majority of the content of Day 2.

I can't decide whether North to South, or South to North is better. North to South would reward you with better views, definitely. But you also run the risk of having to walk 30+ miles in wet shoes after the bogfest of Glen App. The choice is yours.

The main thing to take away from this is you should 100% not do this walk in poor weather. We got extremely lucky, and every cloud in the area somehow missed us - we frequently returned to the car, or back to Stranraer, to find puddles everywhere. I can't imagine how miserable this would have been in the rain. It had been dry for a few days before we went, and yet still the ground underfoot was sodden, treacherous, and mud often ankle deep, with no obvious path. Possibly down to my own sub-part fitness, i found this tough going, but i was able to keep objective and think about how much worse it would have been had we been caught in the rain, and probably quite literally stuck in the mud.

If you were going with 1, or 2 cars, there is a small parking space on the opposite side of the road from Glenapp Church. You could also leave your car at the Lighthouse. Food stops are not plentiful on this route, so bring & buy in the mornings/evenings.

Very useful.When I was a cyclist rather than a walker we used to arrive at villages in that dead time between 5 and 6 when the cafes had shut and the pubs not yet open. It is all the more frustrating if you check in advance and find a food stop closed and walking to another place is even less flexible than cycling. On the other hand, my tendency as a cyclist to become nothing more than a perambulating stomach is far greater than walking.