After more glamorous trips to Mull and Wales recently, I decided to head for the Southern Uplands again this weekend. Bothying or camping seemed like the obvious plan, but instead I decided to go and stay with my sister just outside Edinburgh.

I had loads of ideas for routes - initially thinking of something in the Daer Hills or Lowthers (the logic being that if I ever intend to finish the Donalds, it would make more sense to get these out of the way while I was a bit closer to them, leaving the more interesting Galloway, Moffat and Manor hills as an incentive to travel down from Inverness one day), but ending up parked up at the end of Talla Reservoir at 11:30am, having managed to get away fairly promptly from the car hire depot. The weather had improved as I drove west and north, and now looked reasonable enough.


Day 1.gpx Open full screen  NB: Walkhighlands is not responsible for the accuracy of gpx files in users posts
No messing around here; the route I wanted went over the Games Hope Burn and straight up the steep hillside onto Garelet Hill, which had the hoped-for great views down Talla Reservoir. I expected to meet loads of people due to the number of cars on the verge at Talla Linnfoots, but saw no-one else all day. It would appear that everyone else was planting trees down at Gameshope. 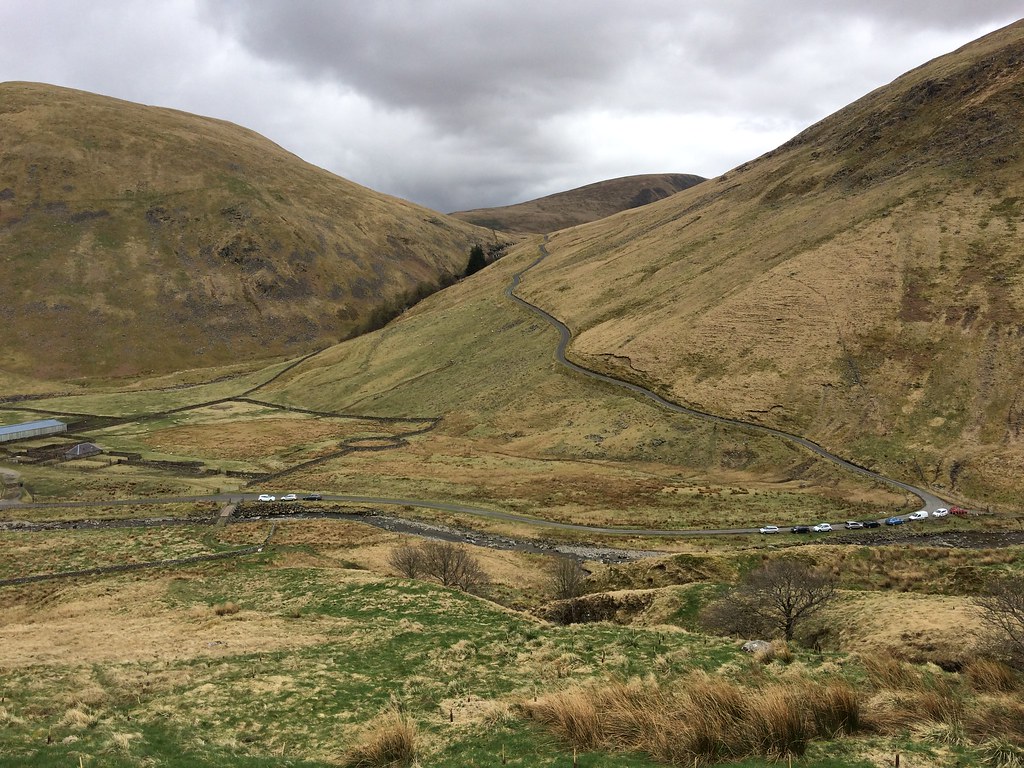 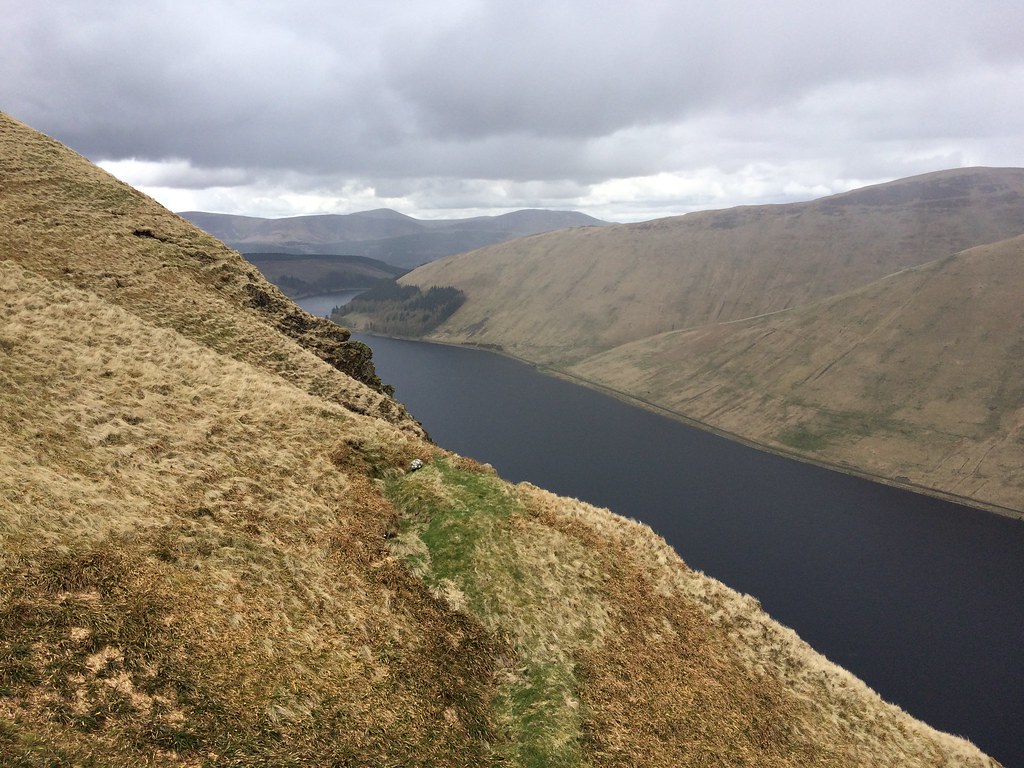 Talla Reservoir from the ascent of Garelet Hill 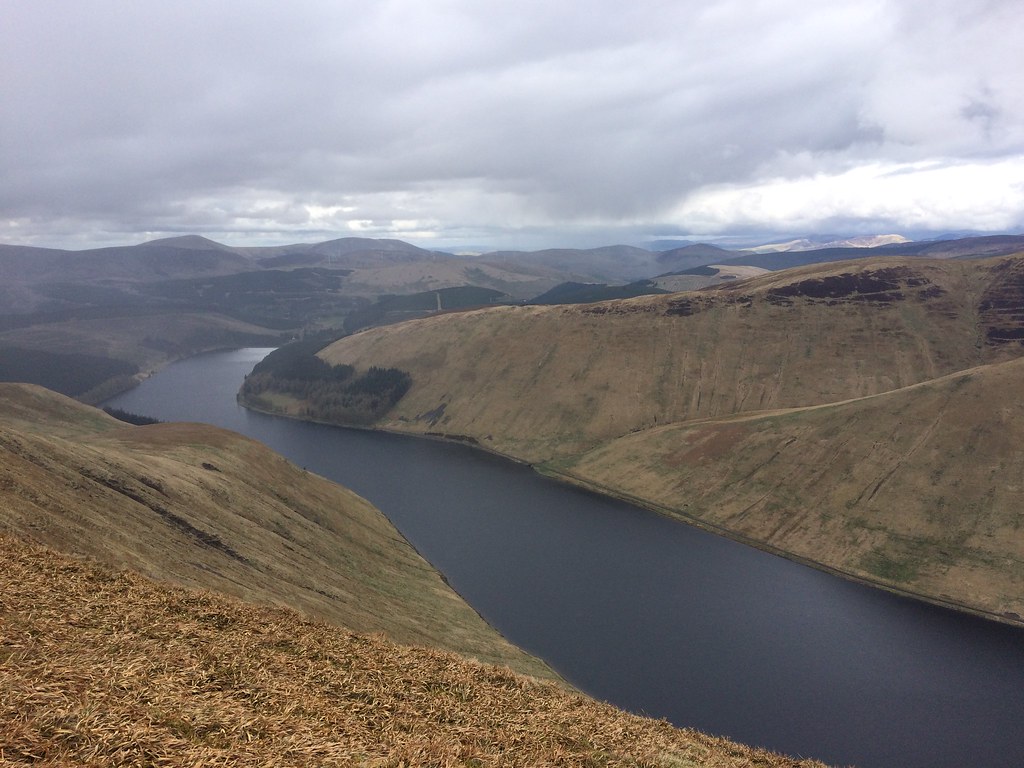 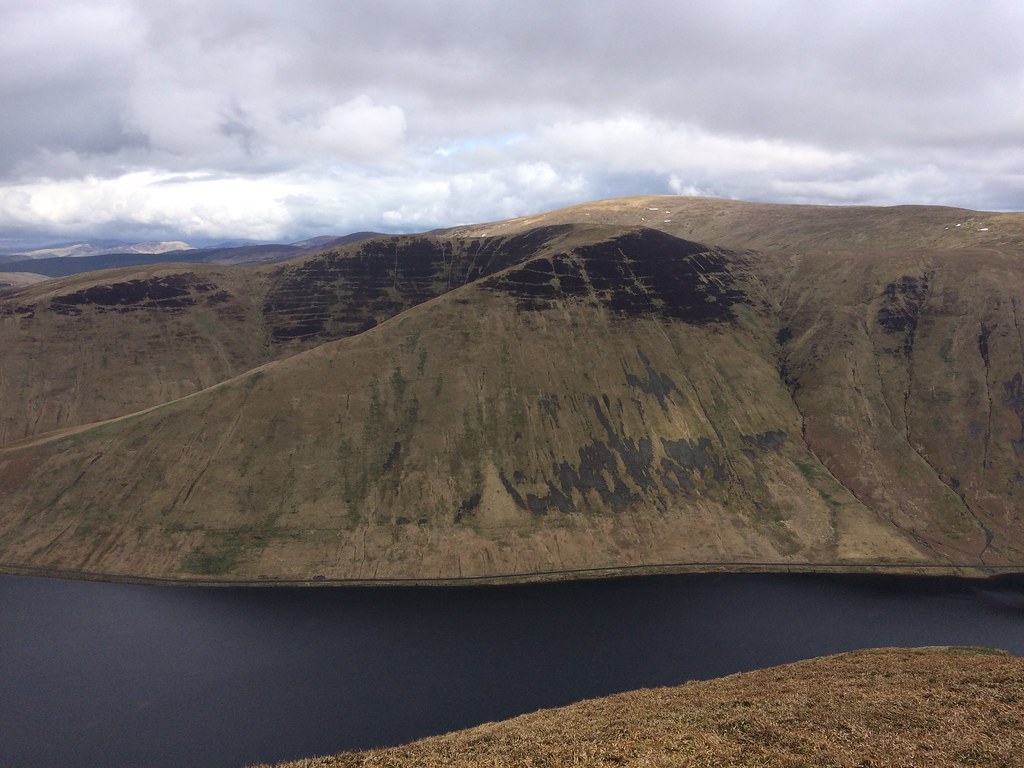 Although a little spongy in places, it was an easy traverse across the next few summits to Garelet Dod. I think I had dismissed these hills as too boring to bother with last time I was up White Coomb, but the ridge was fairly shapely and had good views. The photos don't show it very well, but there was actually a reasonable amount of sunlight on some of the neighbouring summits, and the air was pleasingly clear, allowing me to see the sun glinting on the Solway Firth in the distance. 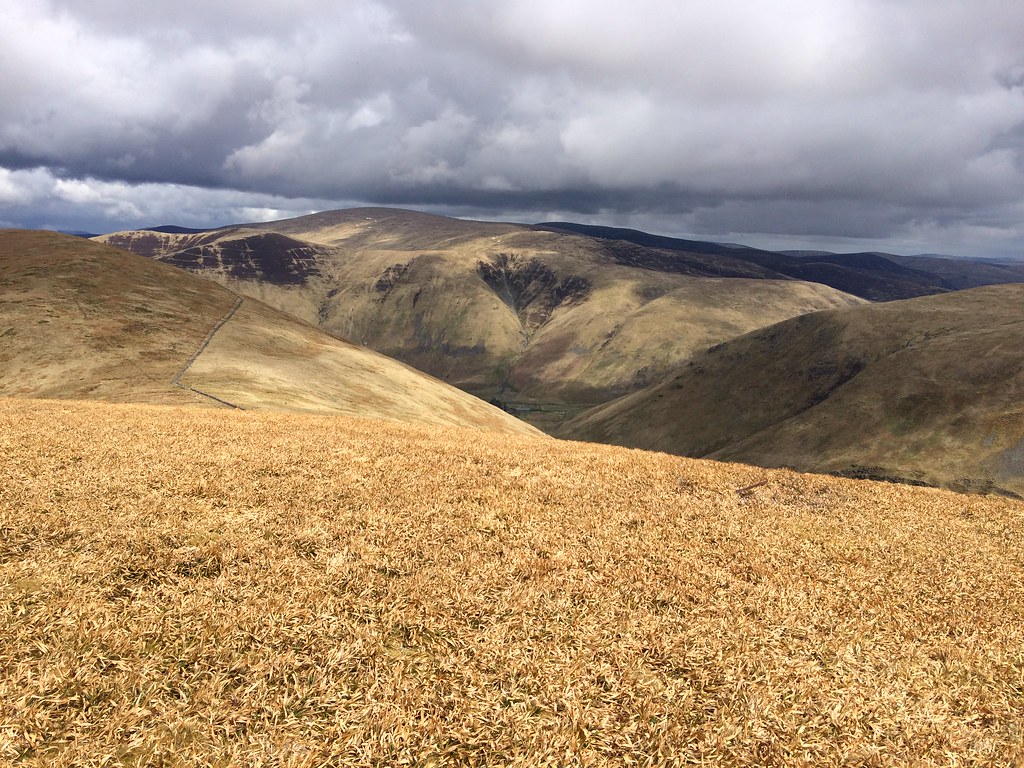 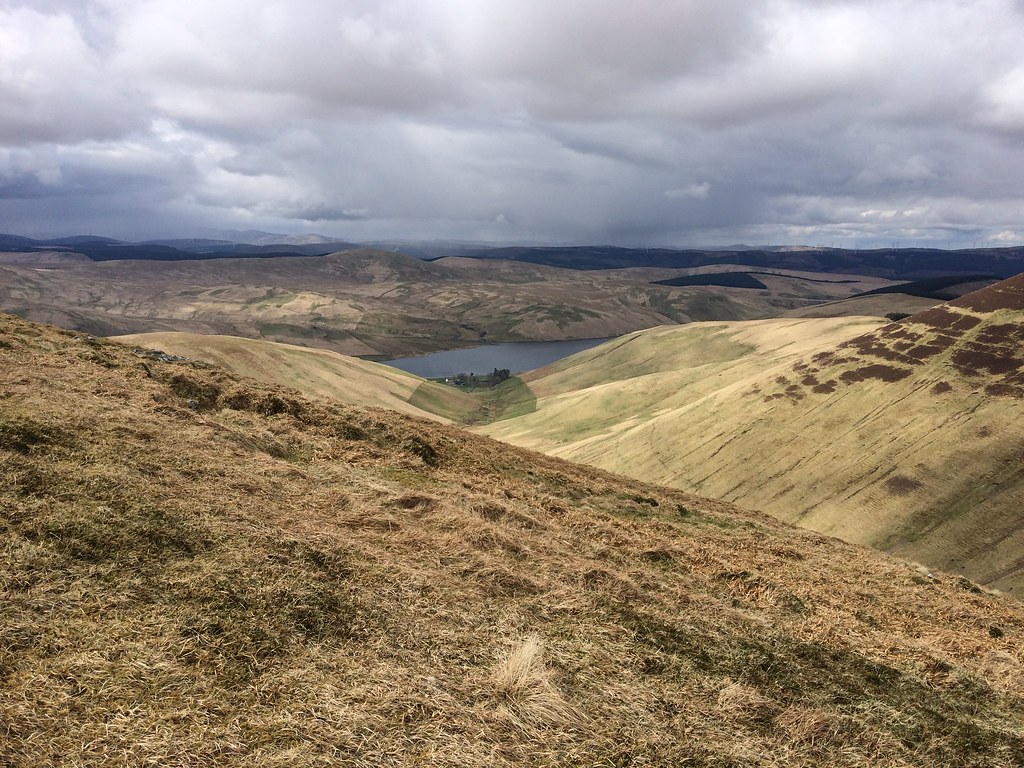 After Garelet Dod, I left the ridge, having been up Din Law and Cape Law fairly recently, and cut down to the corrugated shed which sits high in Games Hope. The going was spongier than it looked, but walking up the side of the burn was easy enough. I gained a bit of height on the White Coomb side of the burn higher up to avoid Rottten Bottom (well, I couldn't avoid my own, but one is enough!). 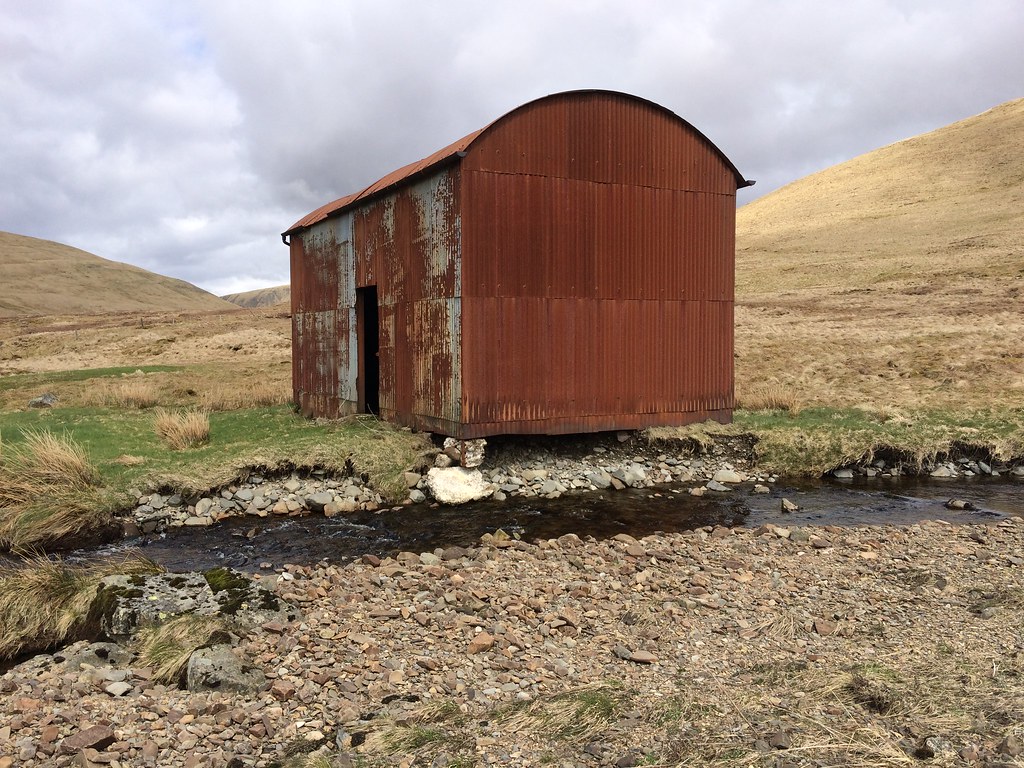 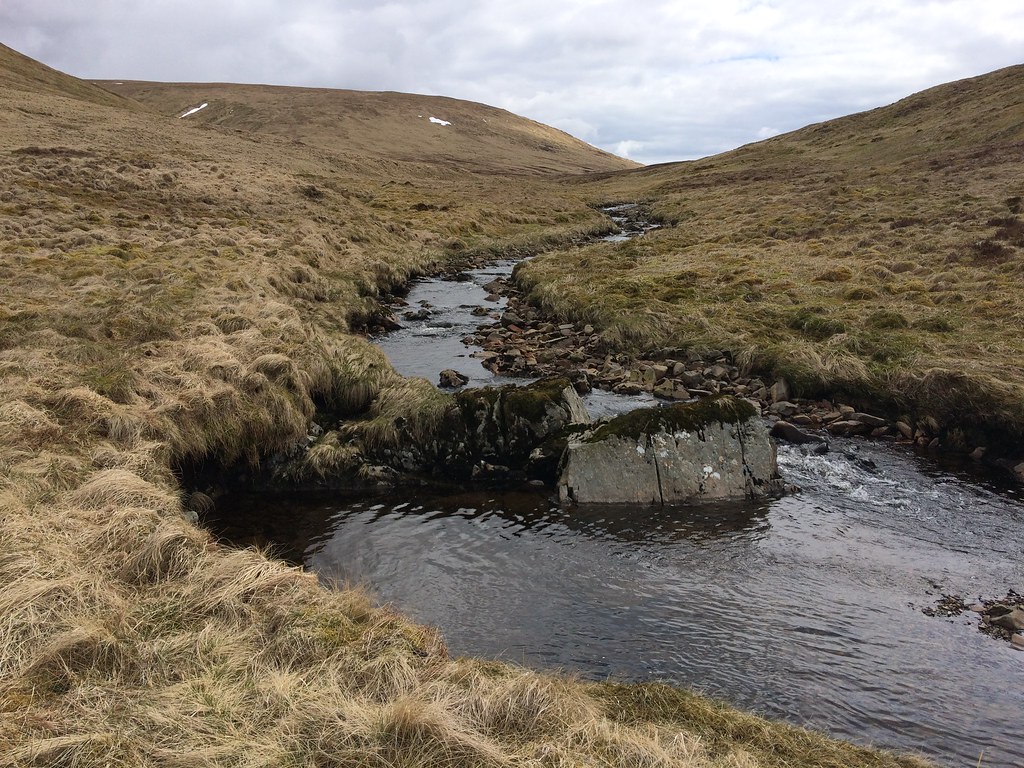 The dribble which emanates from Rotten Bottom (Games Hope Burn)

There is a handy little outcrop which sits above Rotten Bottom, giving a nice dry place to stop for lunch as well as a decent view down the Carrifran Burn. There are some waterfalls visible from here that I didn't know existed. 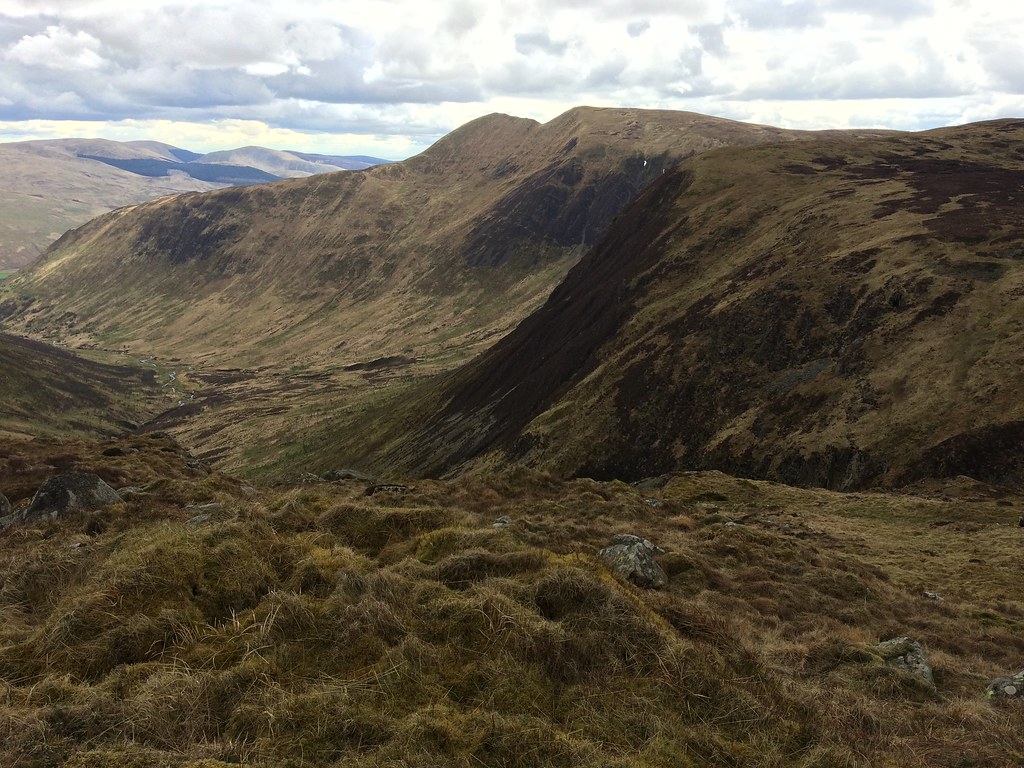 Saddle Yoke from above Rotten Bottom 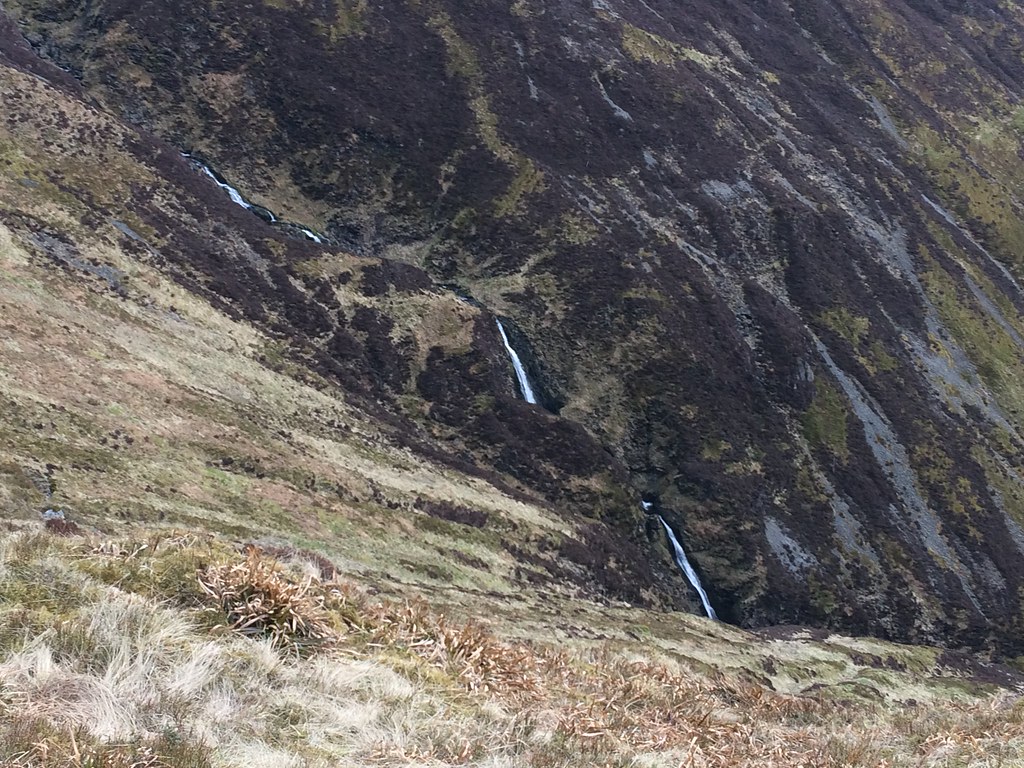 Waterfalls on the upper Carrifran Burn

Then I traversed upwards around the wall of the corrie to get onto the plateau of Carrifran Gans. I had hoped this summit would have an impressive situation given the surrounding crags, but the high point was way too far back from the interesting bits. Still, nice to see the Cheviot again, having been up it only recently. 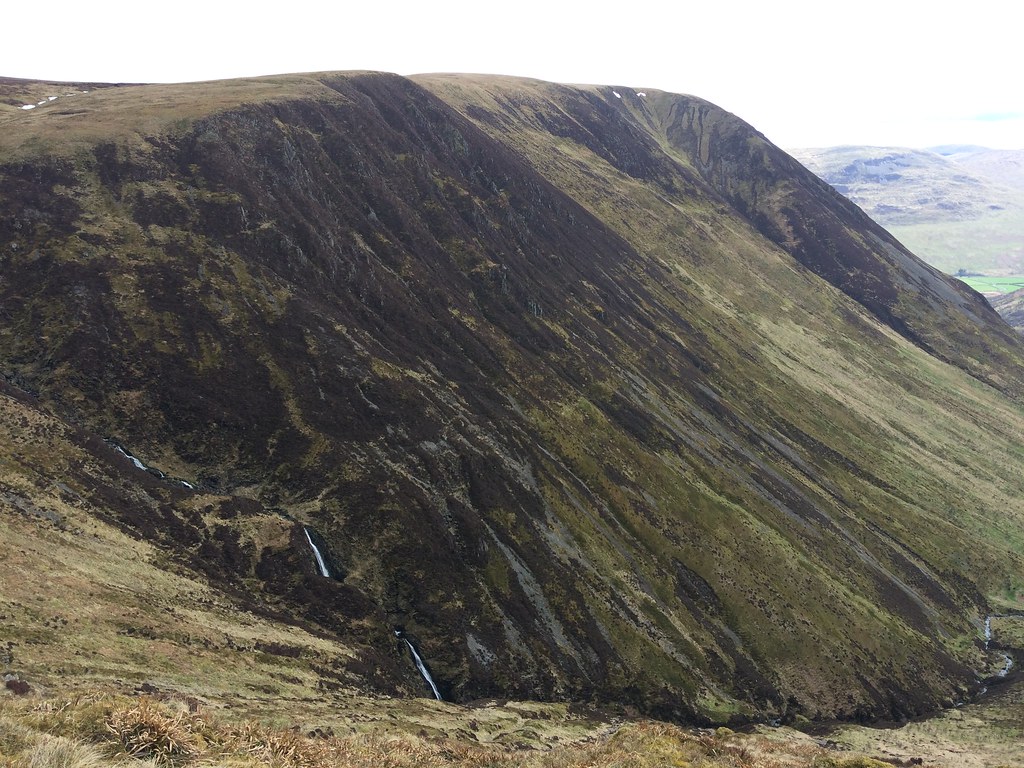 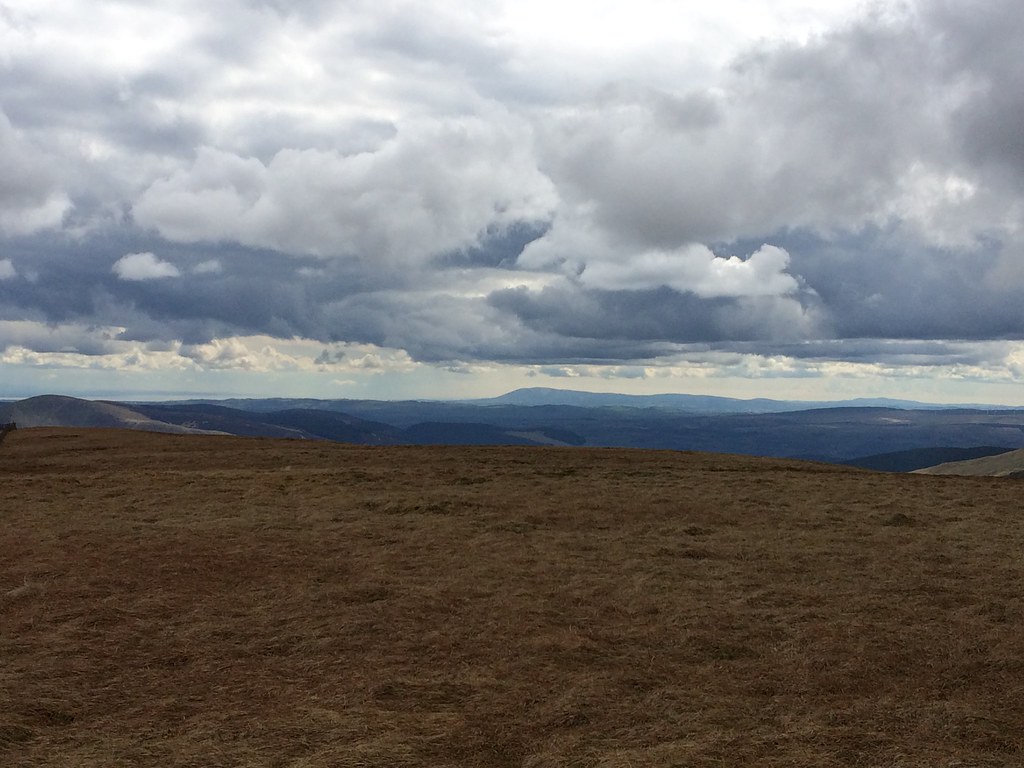 Criffel and the Solway Firth

It was an easy walk over to White Coomb from here - again the actual summit isn't very inspiring, but it is close to some more impressive scenery. An uneventful but easy wander across the plateau to Firthybrig Head took me to a point where I could finally see Loch Skeen, however it was best seen from the ascent of Lochcraig Head. 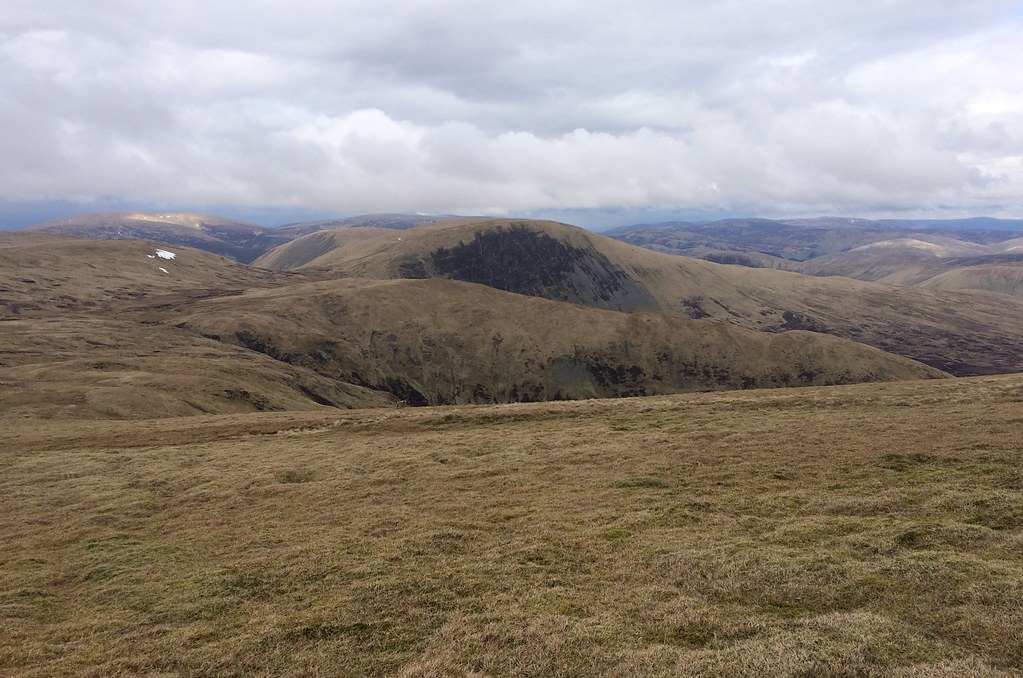 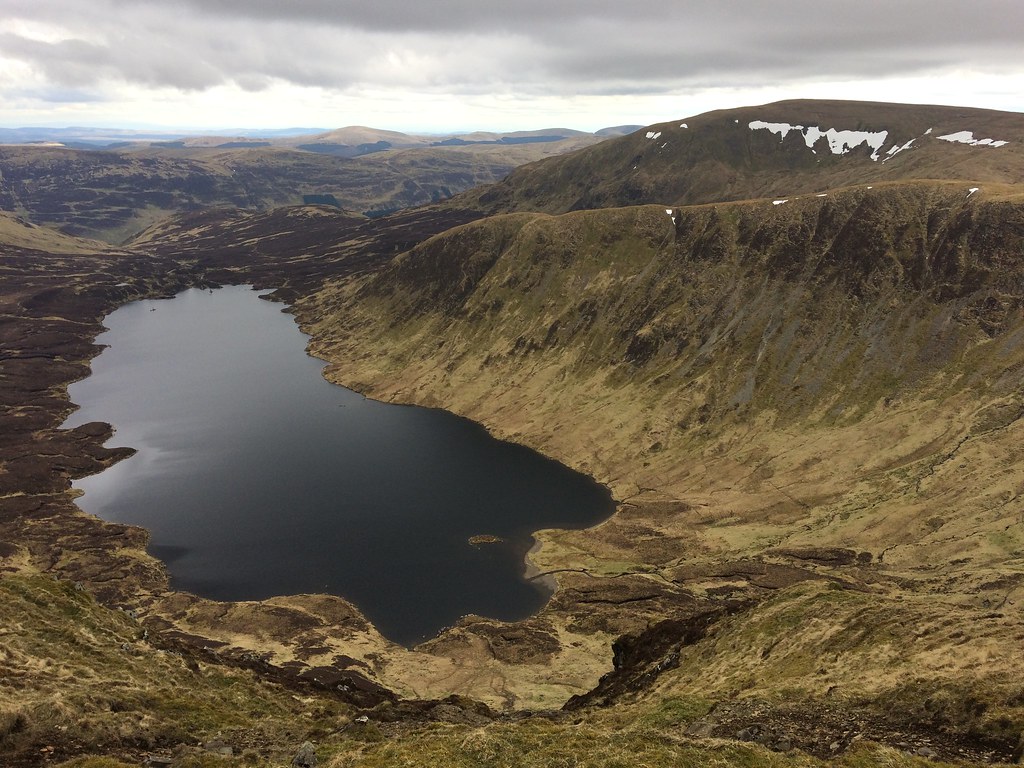 After Lochcraig Head, all that remained was to cover a couple of grassy miles back to the road. Some of this was short turf, some was marshy, but it was all pretty quick. 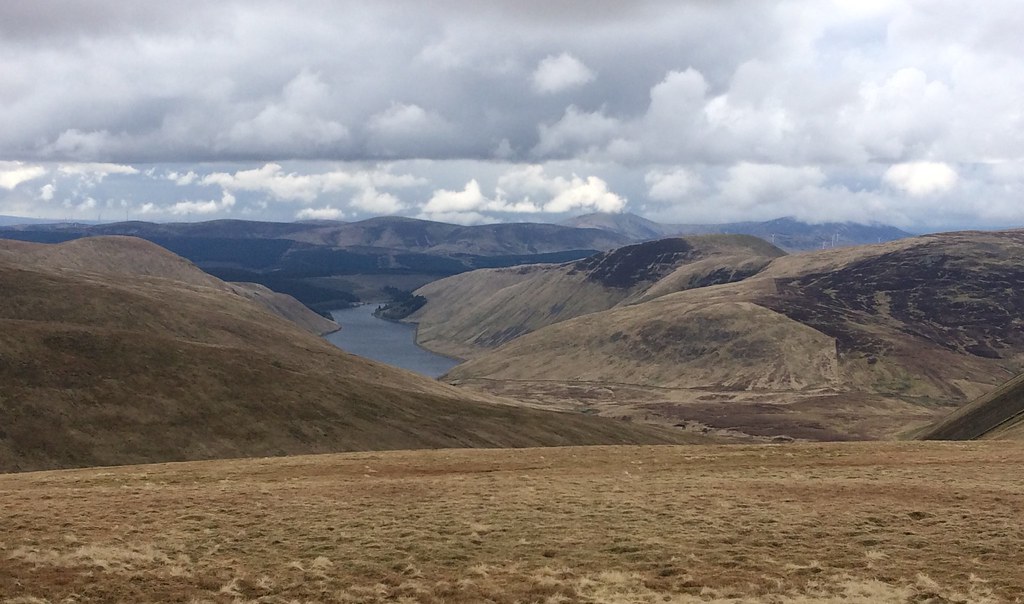 Talla Reservoir from the descent of Lochcraig Head 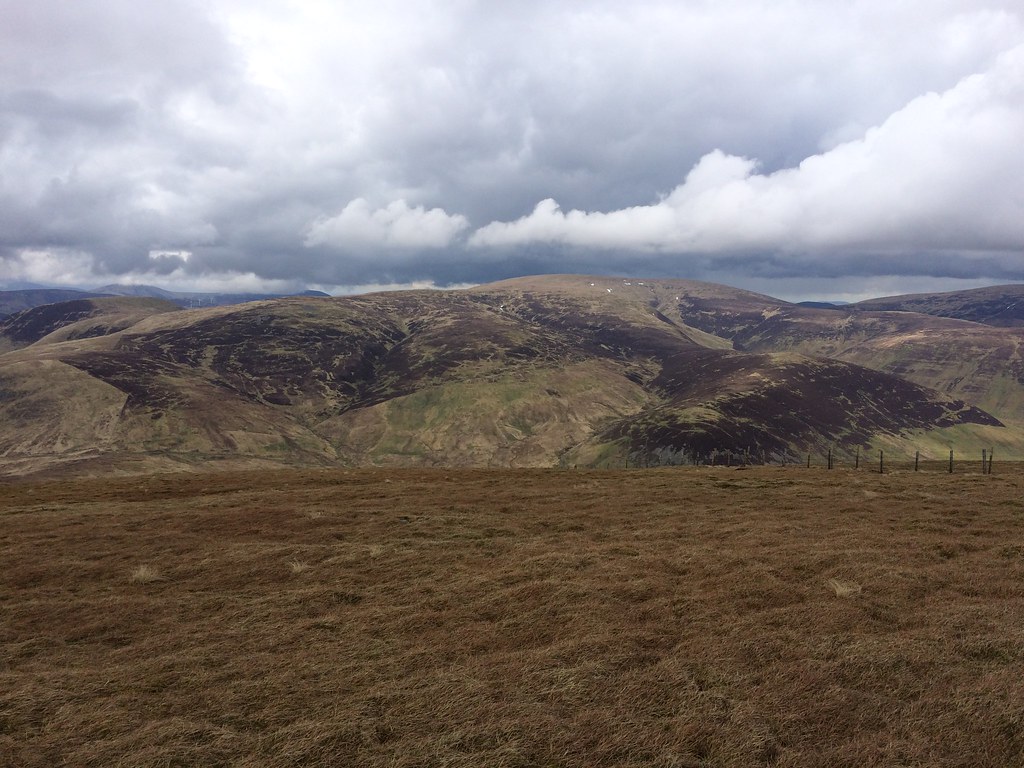 A short walk down the road brought me back to the car. The White Coomb area is probably the most interesting in the Southern Uplands away from the Galloway Forest, and I had discovered some more nice bits of it today that I hadn't expected to be of much interest. 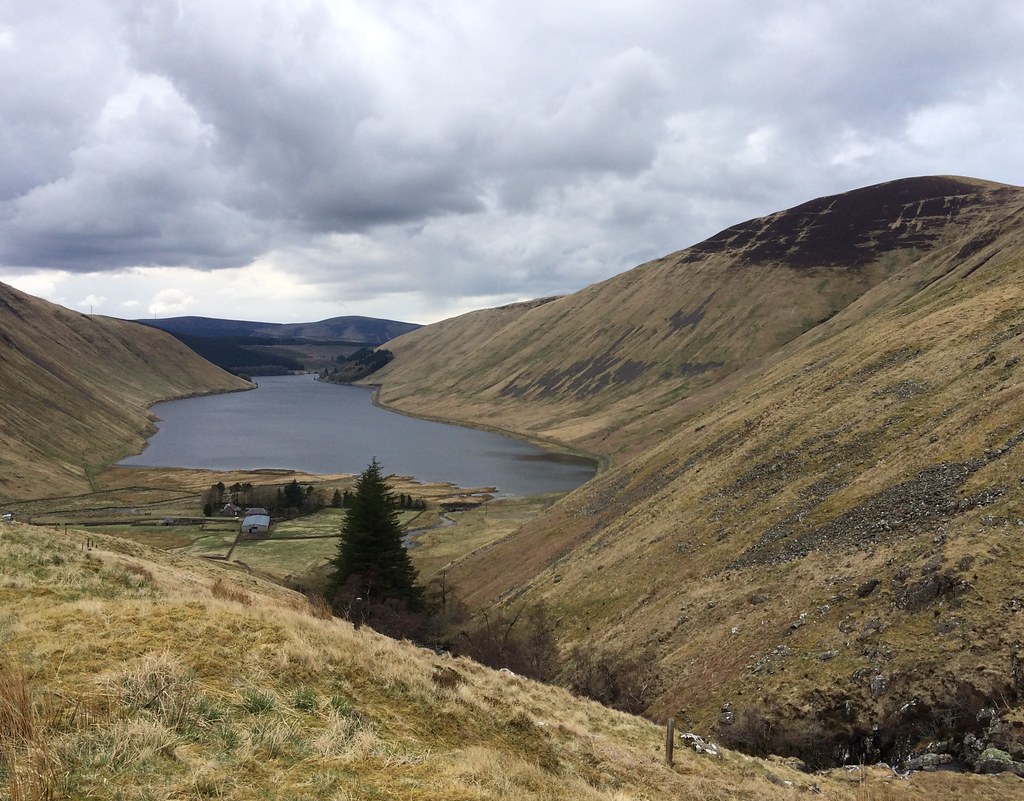 I drove east past Megget Reservoir, having originally intended to nip up the New Donald of Clockmore on the way past, but instead I pushed on for Whitehope Law above Innerleithen, realising that I was running out of time. As it was, Laura phoned me near Innerleithen and suggested that I might like to get over to her place sooner rather than later, so I skipped out Whitehope Law as well.