A fine day on the Manor Hills

A fine day on the Manor Hills

I had stopped off with Laura and Kris on Saturday evening, and seen my neice for the first time since Christmas - a definite future hillwalker right there

. Leaving Roslin a bit later than I intended, I was glad to see the weather had improved since I had woken up. Passing through Eddleston, I decided to take a shortcut through the Meldon Hills - while I didn't have the map of this area, I had previously spotted White Meldon and identified it as a really easy and quite pleasant Marilyn. Pulling up by the toilets next to the minor road and crossing the burn, it barely took me 15 minutes to get to the summit.


White Meldon.gpx Open full screen  NB: Walkhighlands is not responsible for the accuracy of gpx files in users posts 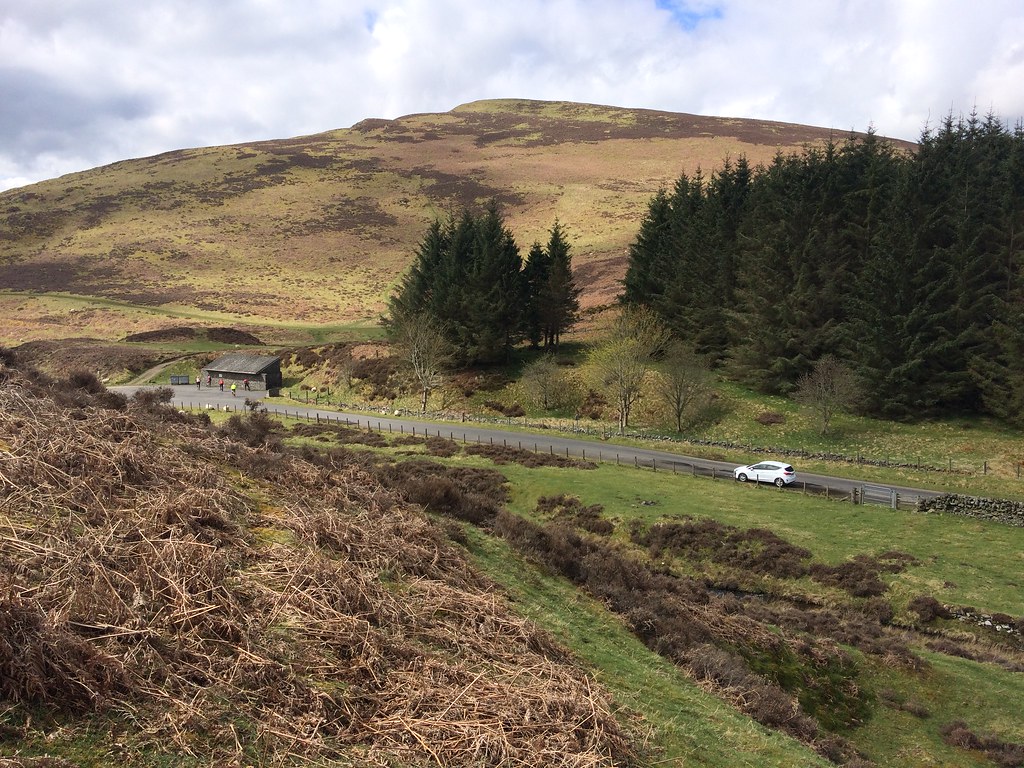 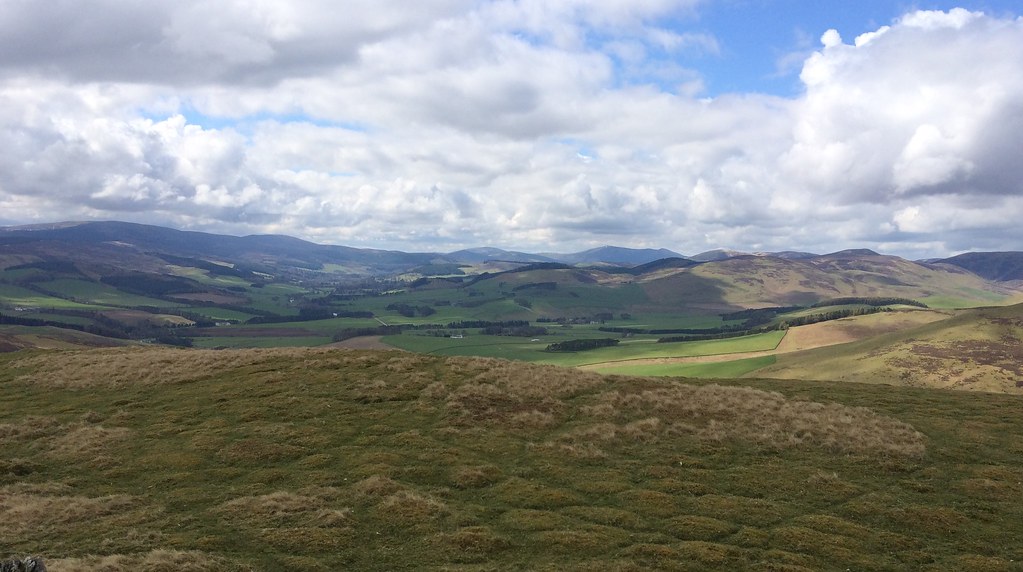 It was a good viewpoint for the Manor Holls where I was headed next, and this part of Tweeddale. Getting back to the car was even quicker. Later on, I noticed that it was my 200th Scottish Sub 2000 foot Marilyn - a bit of a sub-category if ever there was one, but not bad considering I'm not bagging them 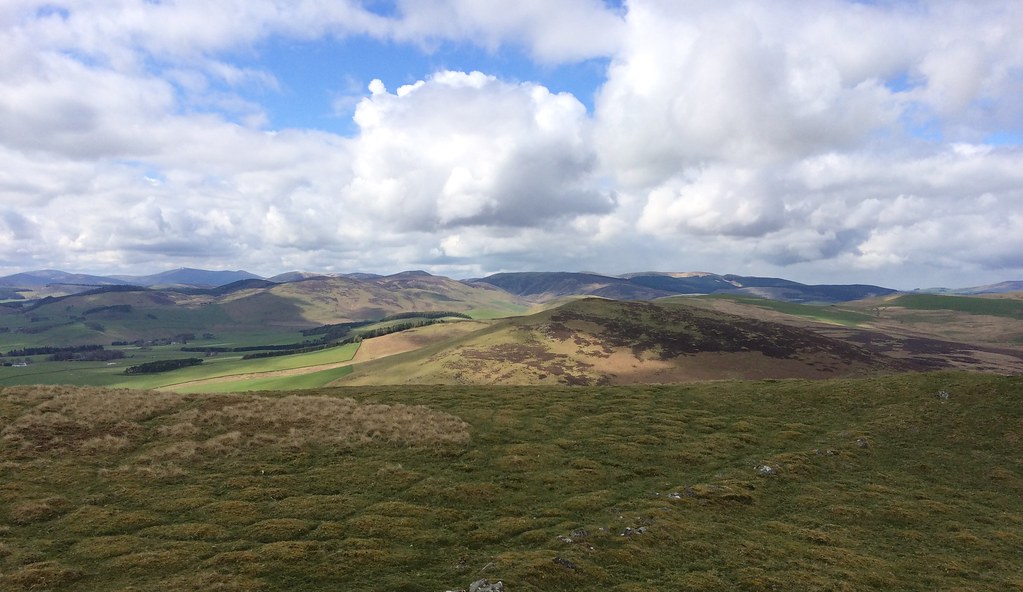 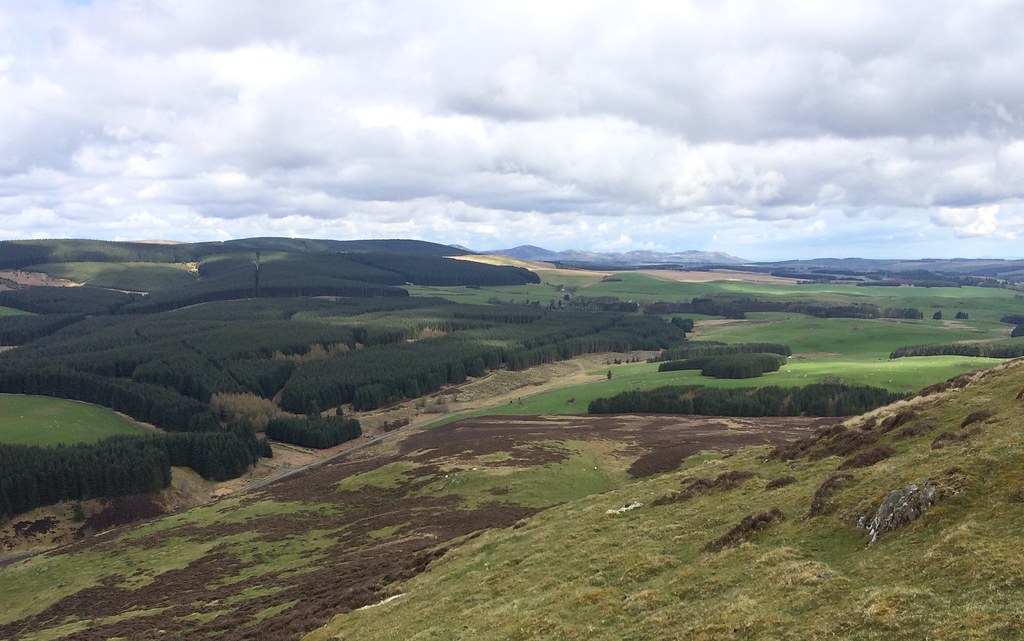 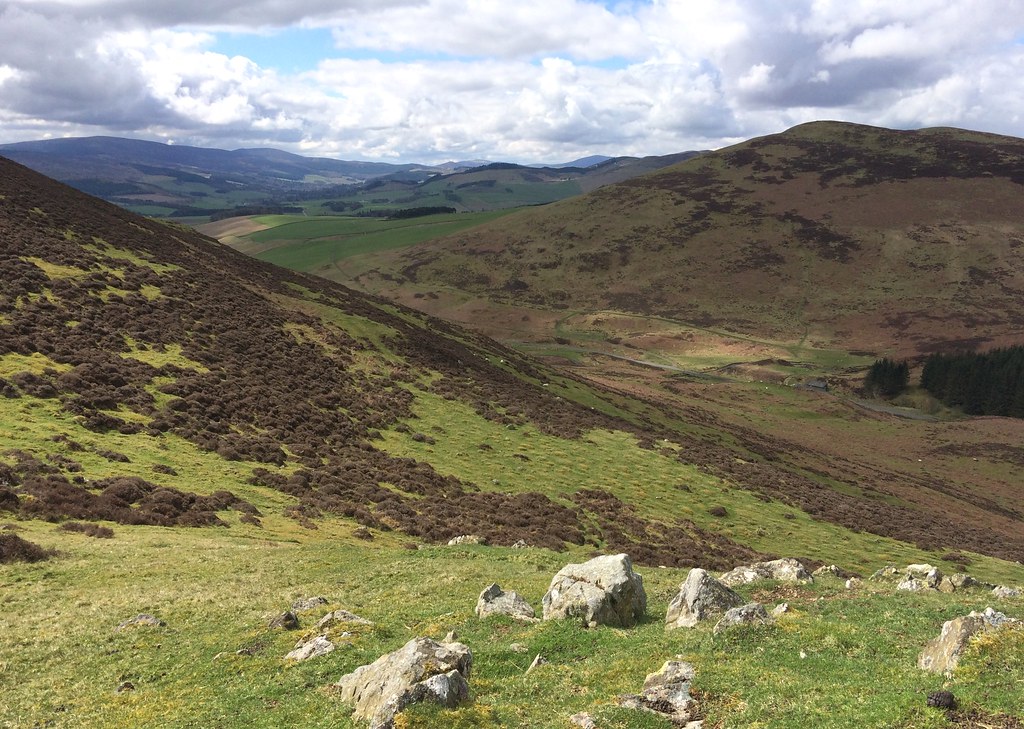 The weather just kept getting better, and as I drove past Stobo Castle with daffodils lining the road on both sides, I wondered if I had ever noticed that the borders could be so attractive before. I hadn't researched parking, so was glad to find a convenient gravelled area just next to the bridge at Stanhope. By now it was afternoon.


Day 2.gpx Open full screen  NB: Walkhighlands is not responsible for the accuracy of gpx files in users posts 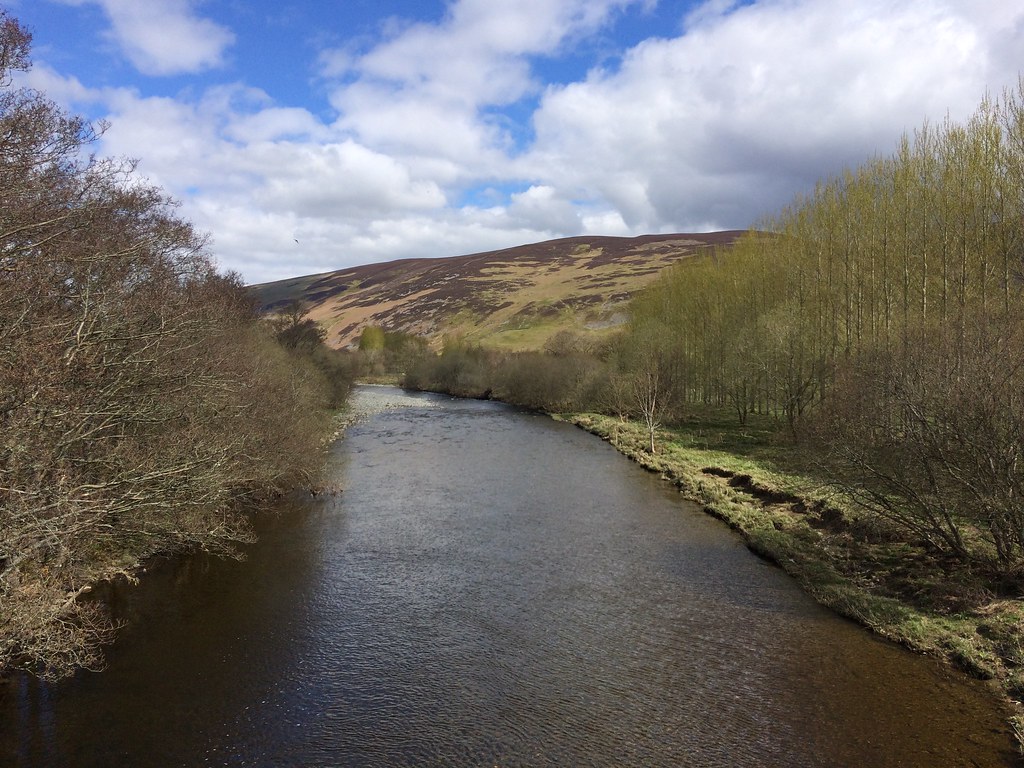 A nice walk along the floor of Tweeddale led me to Hopecarton, where I followed the Hopecarton Burn for a short distance before following a sheep track diagonally up the face of Drumelzier Law. After a short battle with some heather, I picked up a path on the ridge, and the rest of the ascent was fine underfoot. 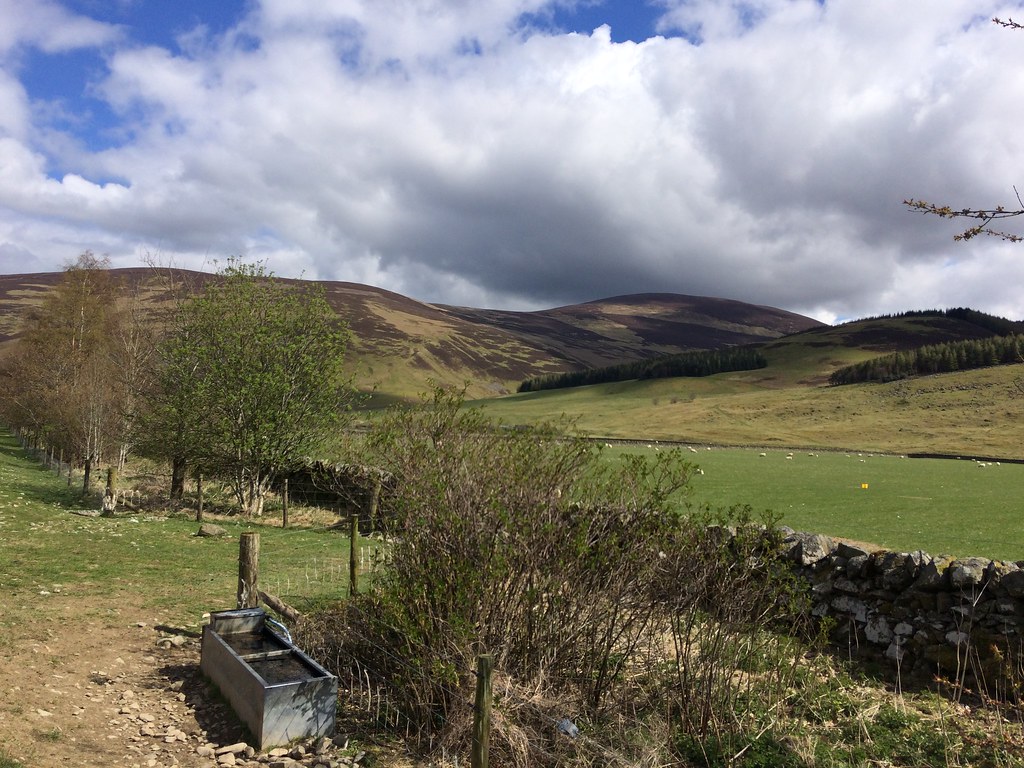 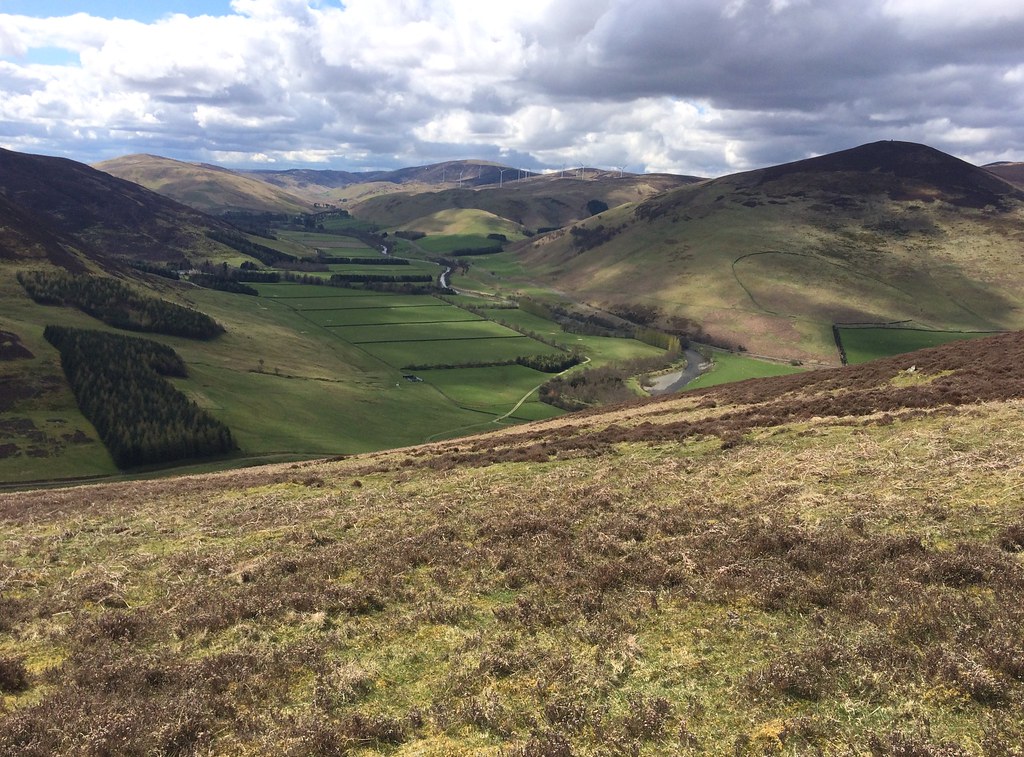 South down Tweeddale from Drumelzier Law 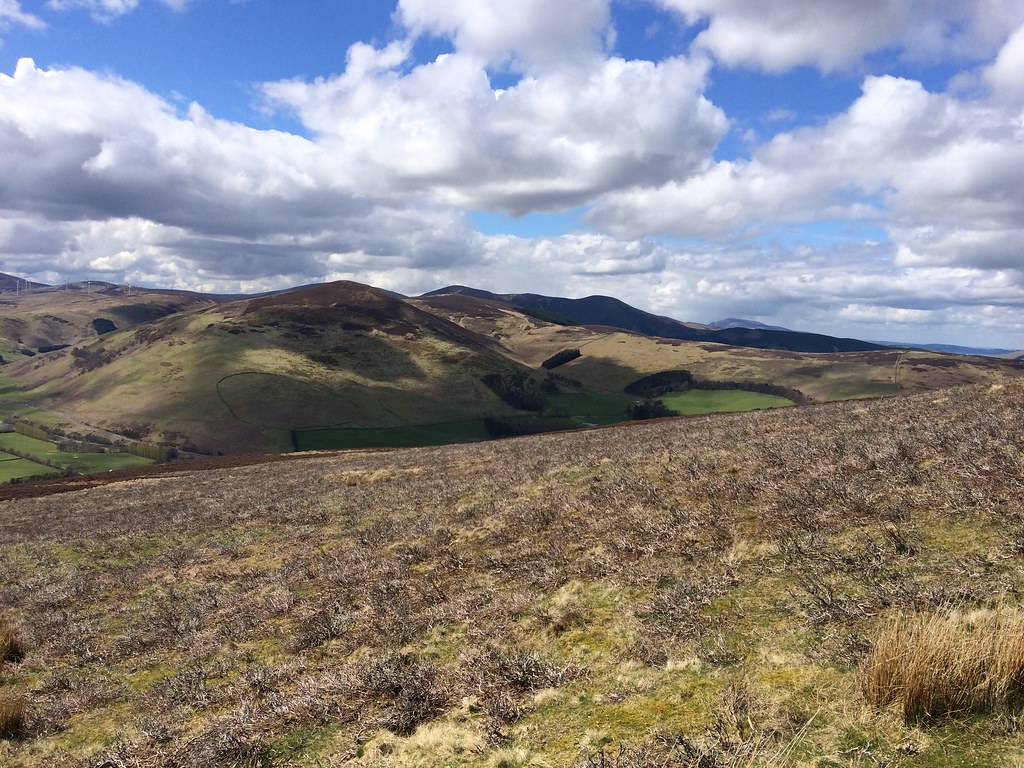 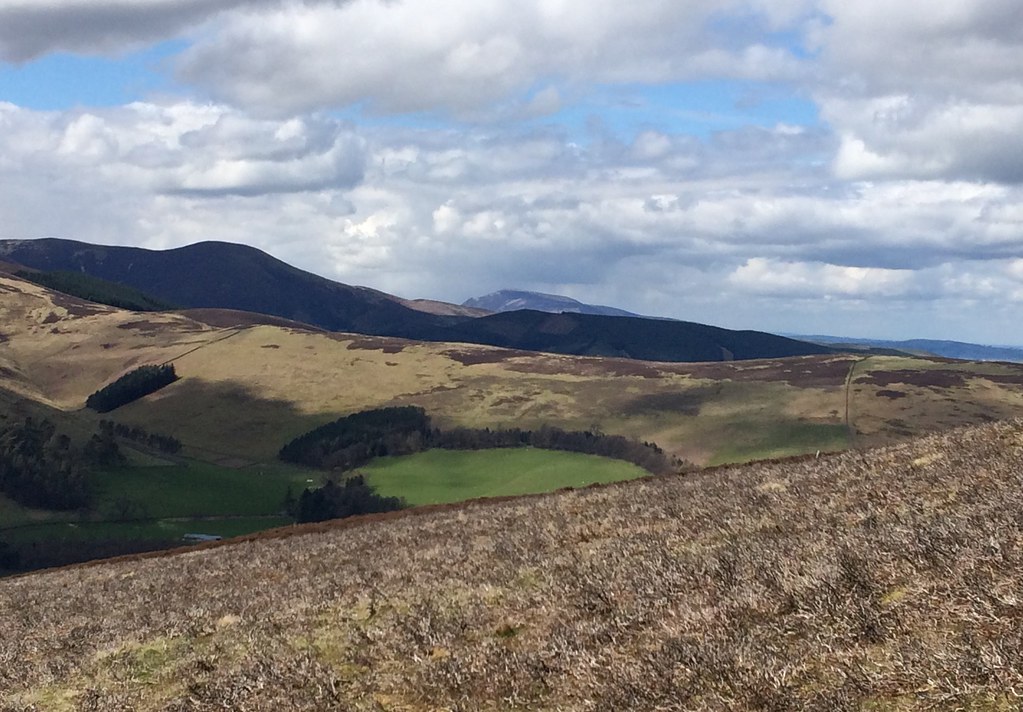 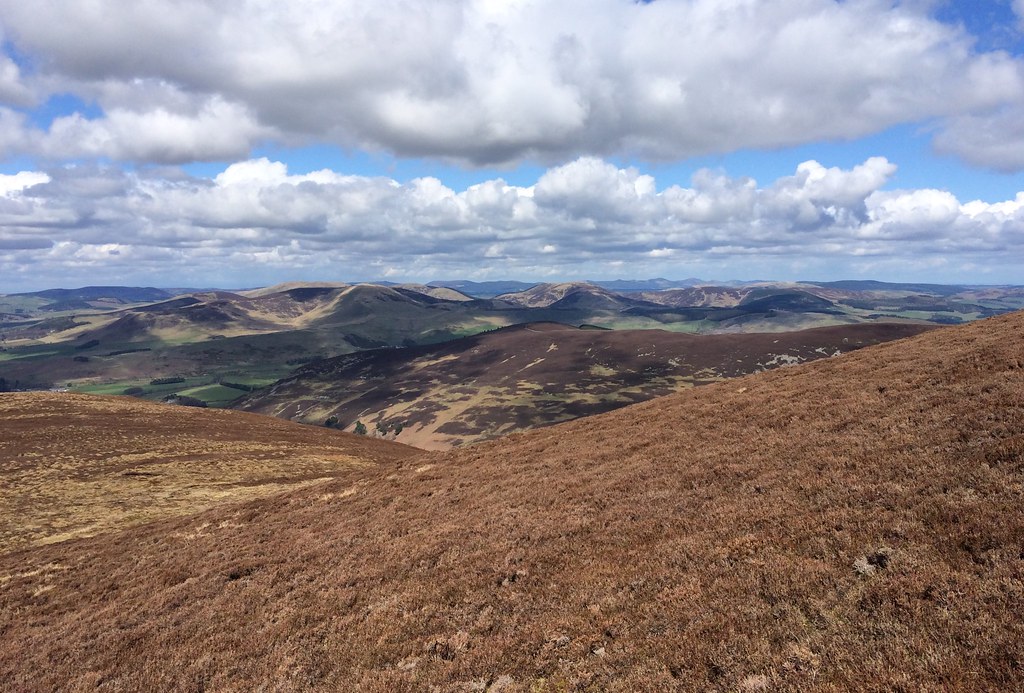 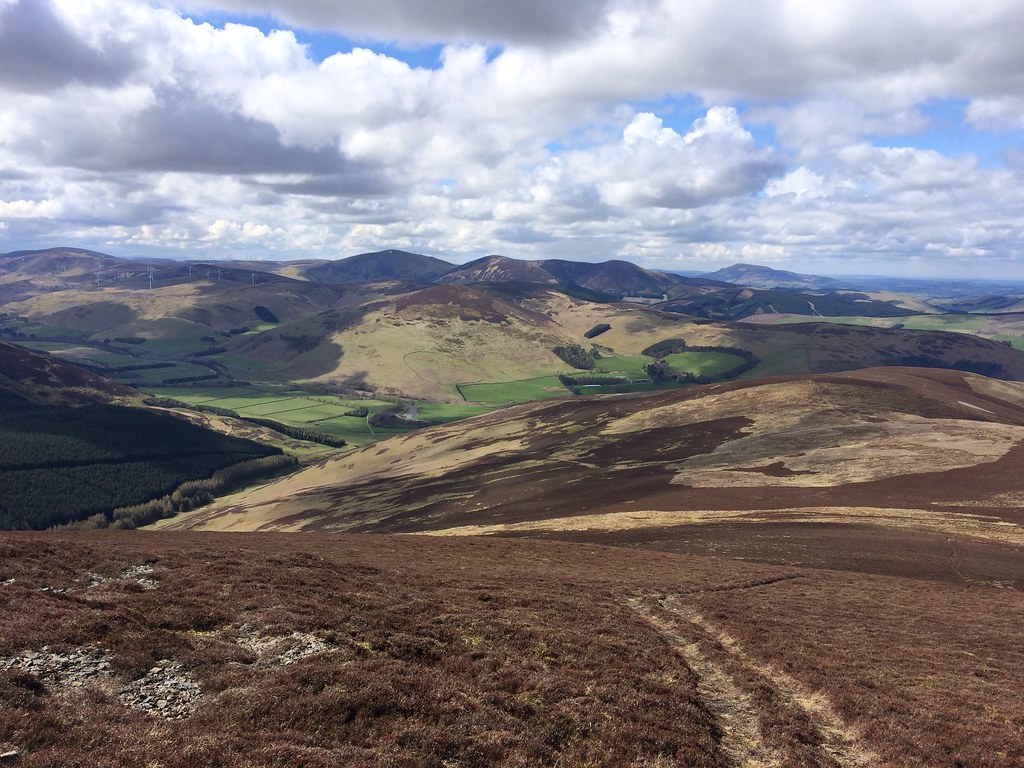 Culter Fells with Tinto to the right 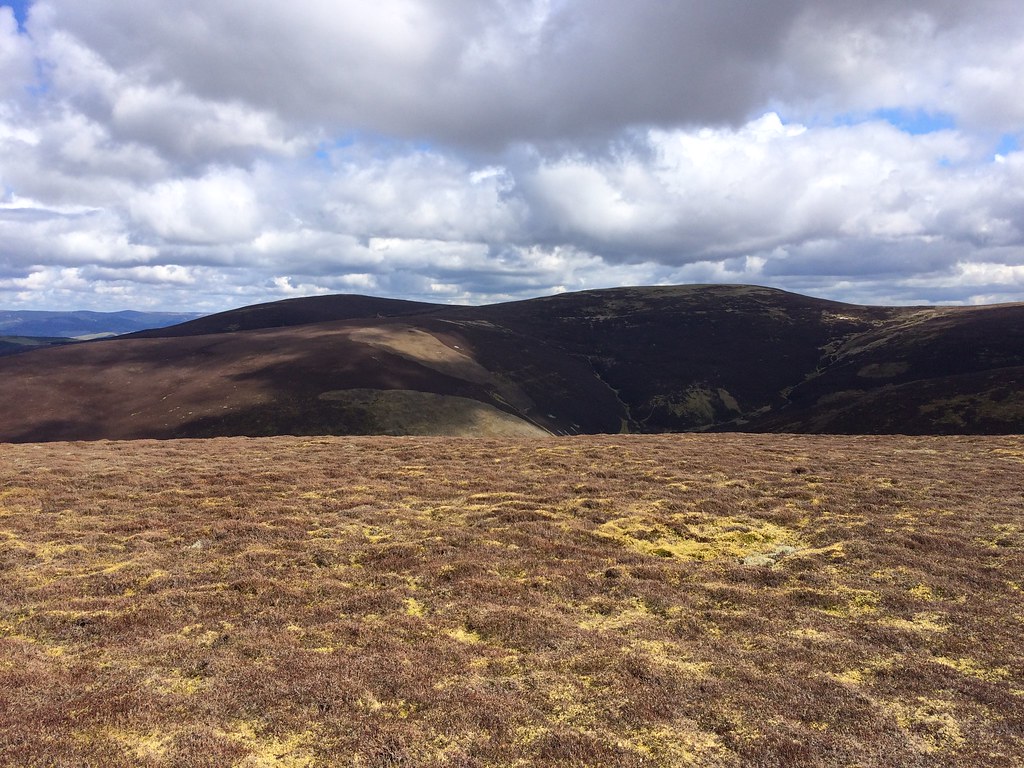 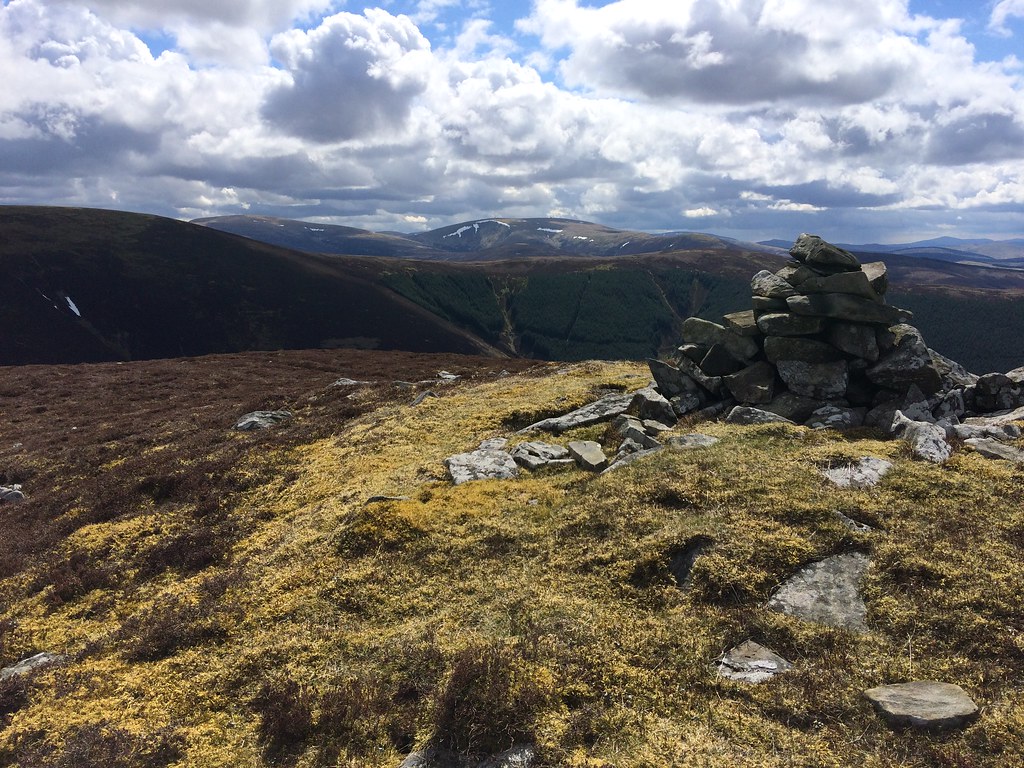 Great views to the Culter Fells and Tinto from here, then a reasonable path through the heather to Glenstivon Dod, after which I took a bit of a heathery shortcut across the head of a burn to the col beneath Pykestone Hill. From here there was a bit of an out-and-back across Pykestone Hill to The Scrape. On the way back over Pykestone Hill, the cold breeze had dropped and the sun was warm, so I had some lunch. Both of these hills had very close-cropped turf on the summits, although the parts in between were a little boggy in a couple of places. 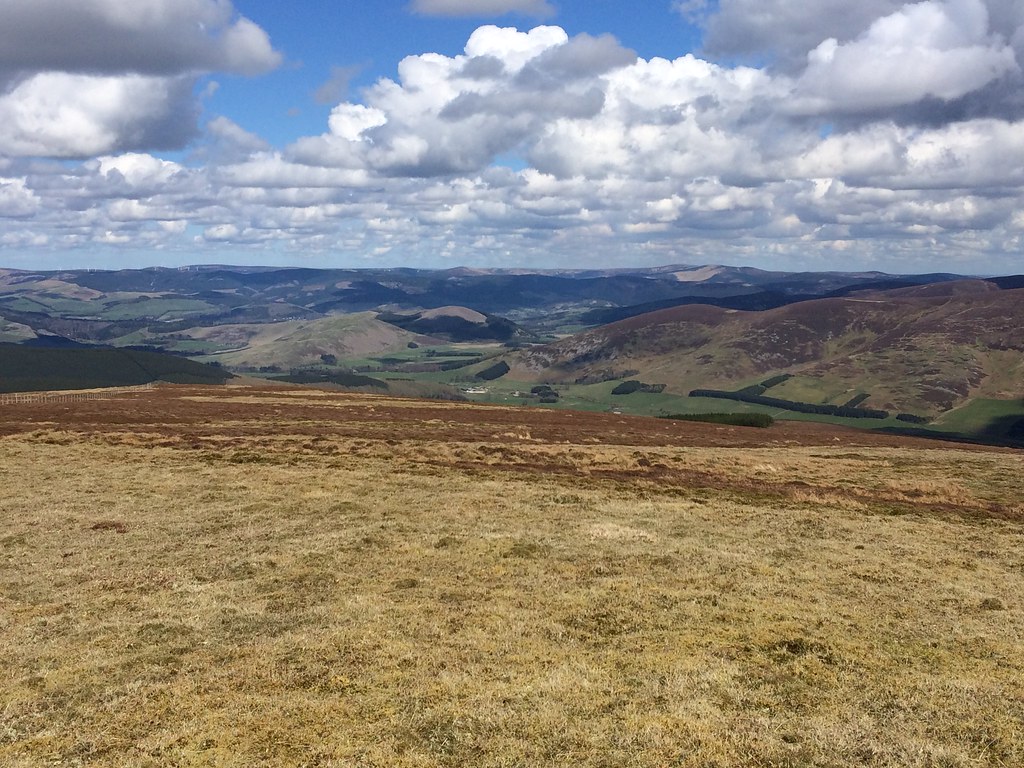 Cademuir Hill and Peebles from The Scrape 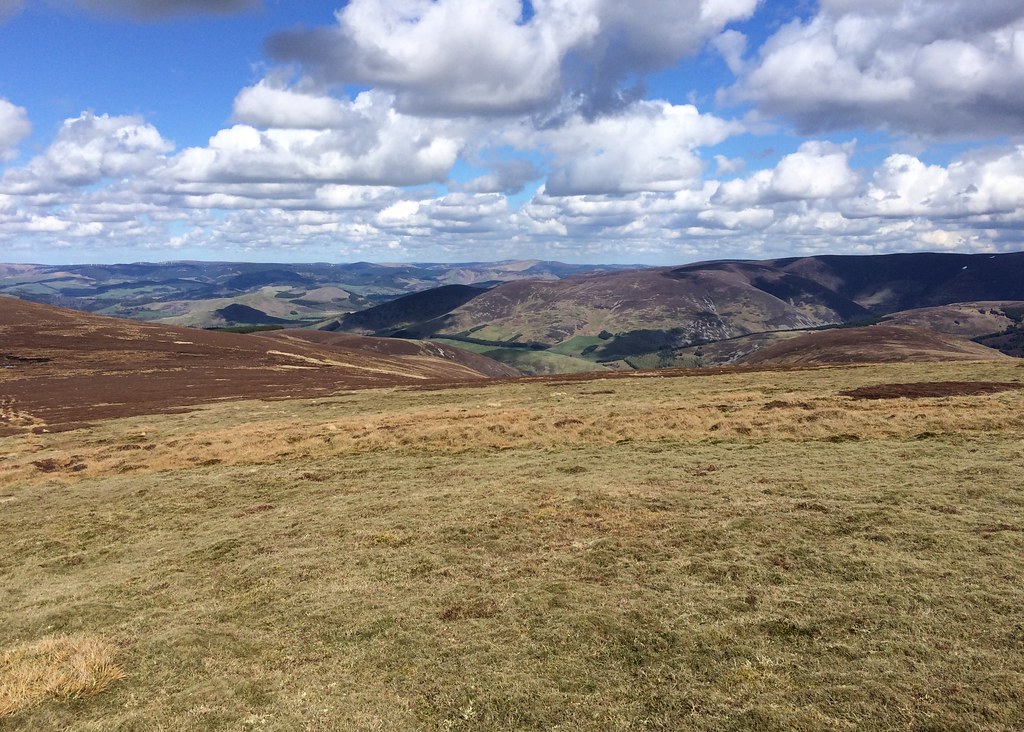 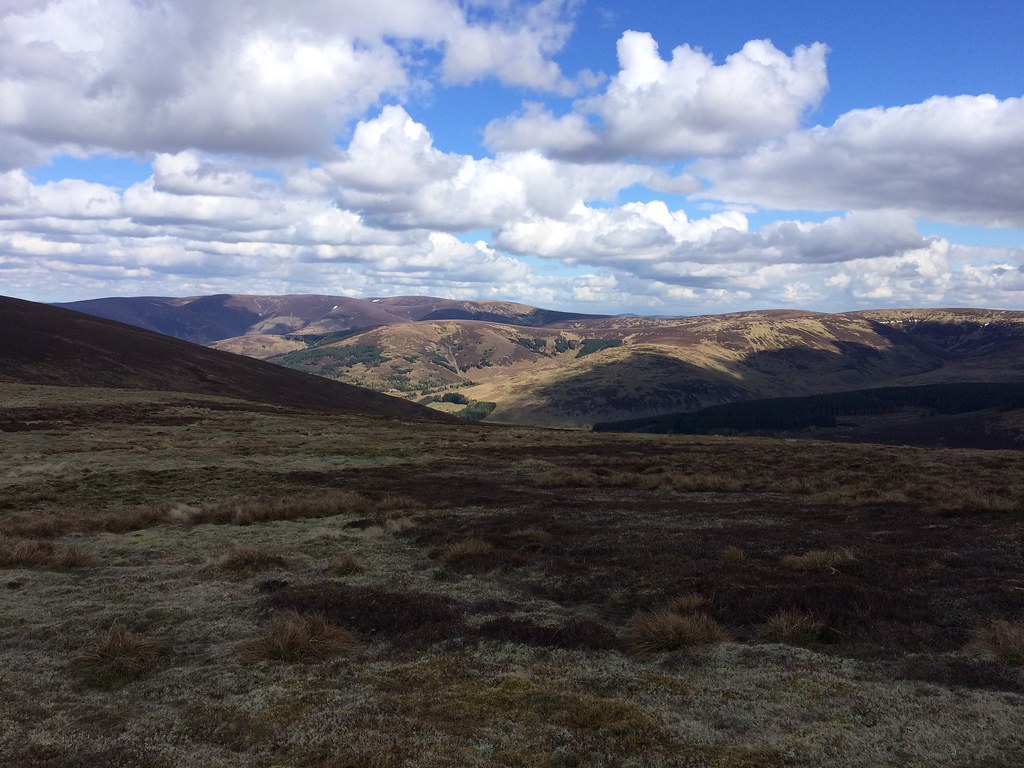 I had to make a bit of a diversion to pick up Middle Hill - definitely the least interesting summit of the day - then a heathery traverse to get back on route. Dollar Law had quite a climb onto it, but once up, there about 2 miles of lovely short turf to stroll in the sun over to Cramalt Craig. This was probably the best part of the traverse, with clear views in all directions. I could just about make out the Highlands from here (Ben Vorlich in particular), although there were showers and dark clouds in that direction. 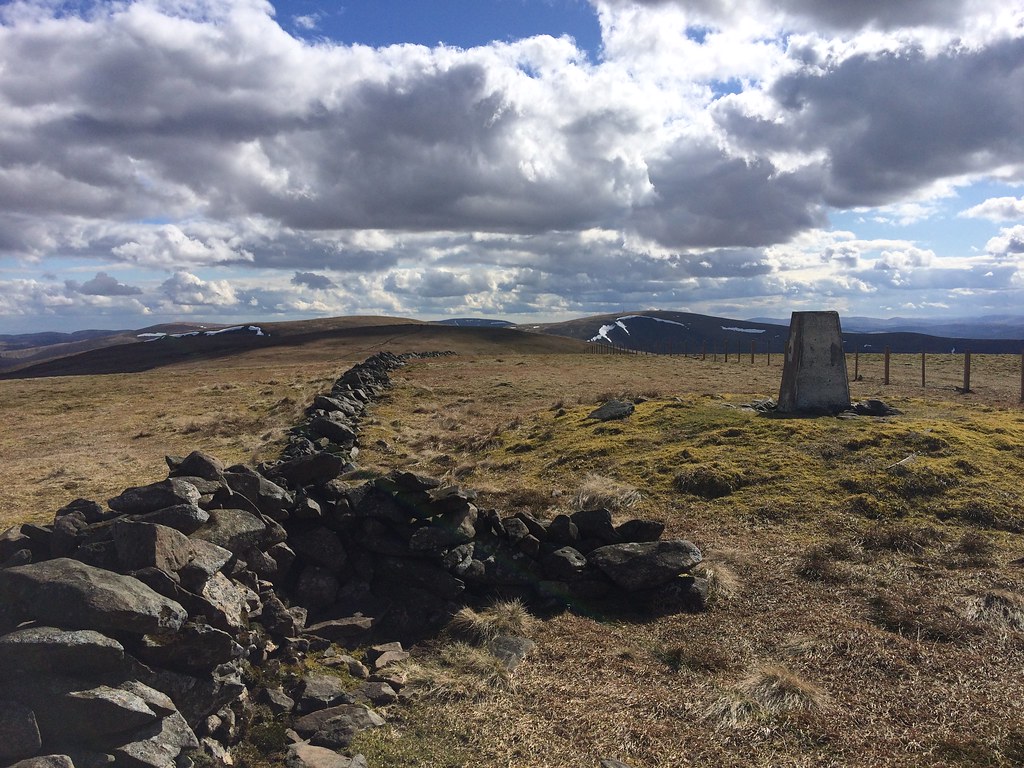 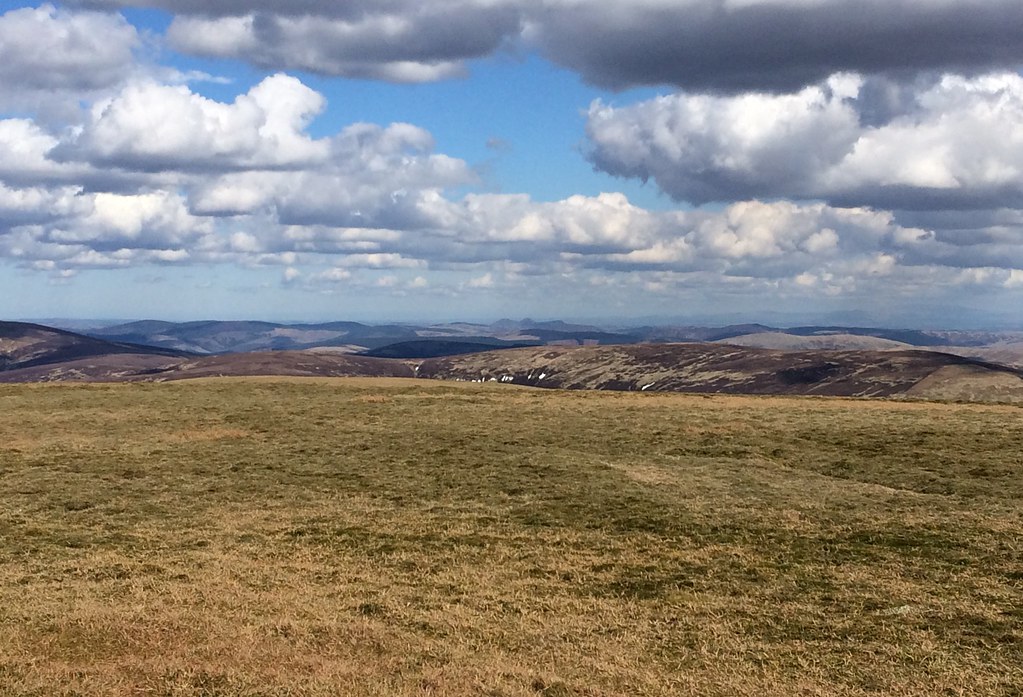 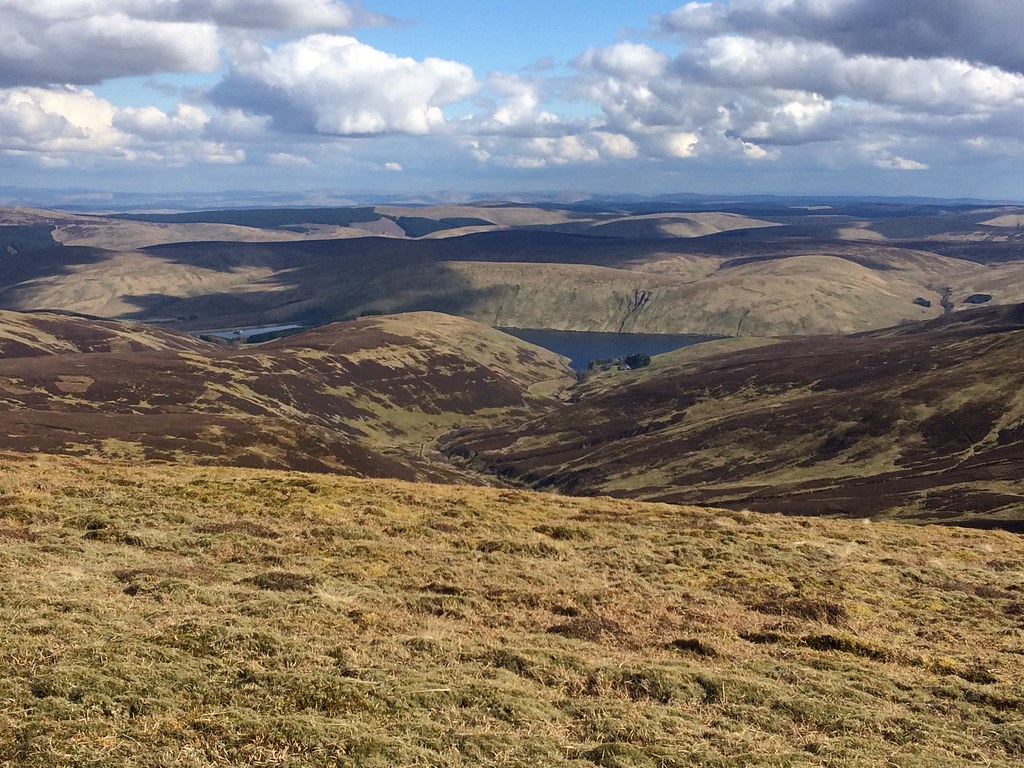 Megget Reservoir from near Cramalt Craig 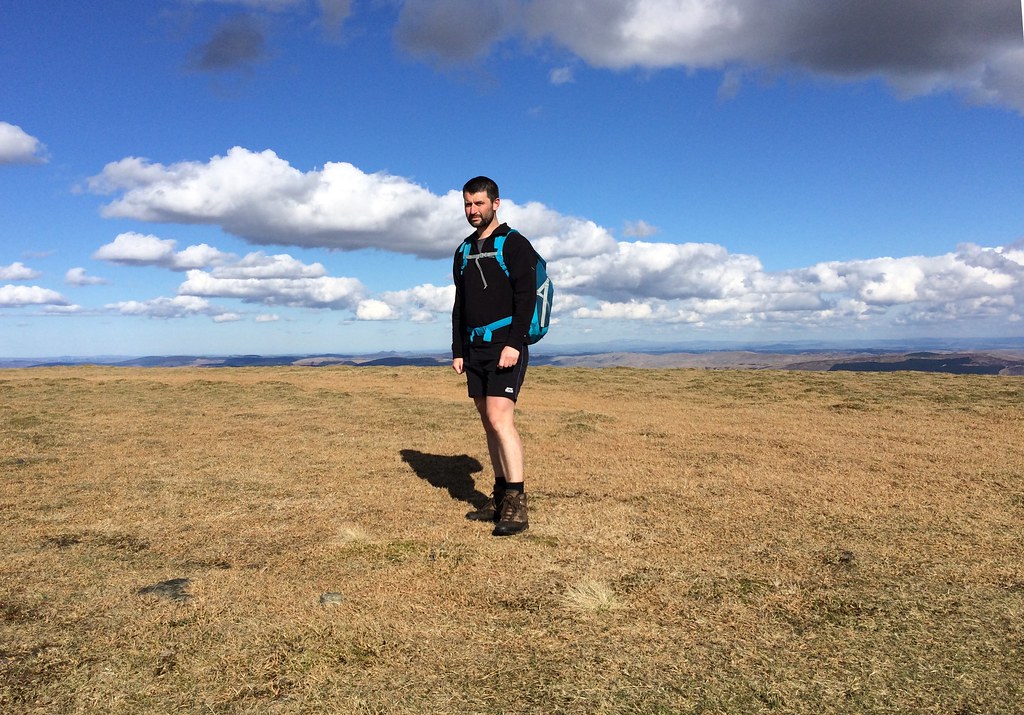 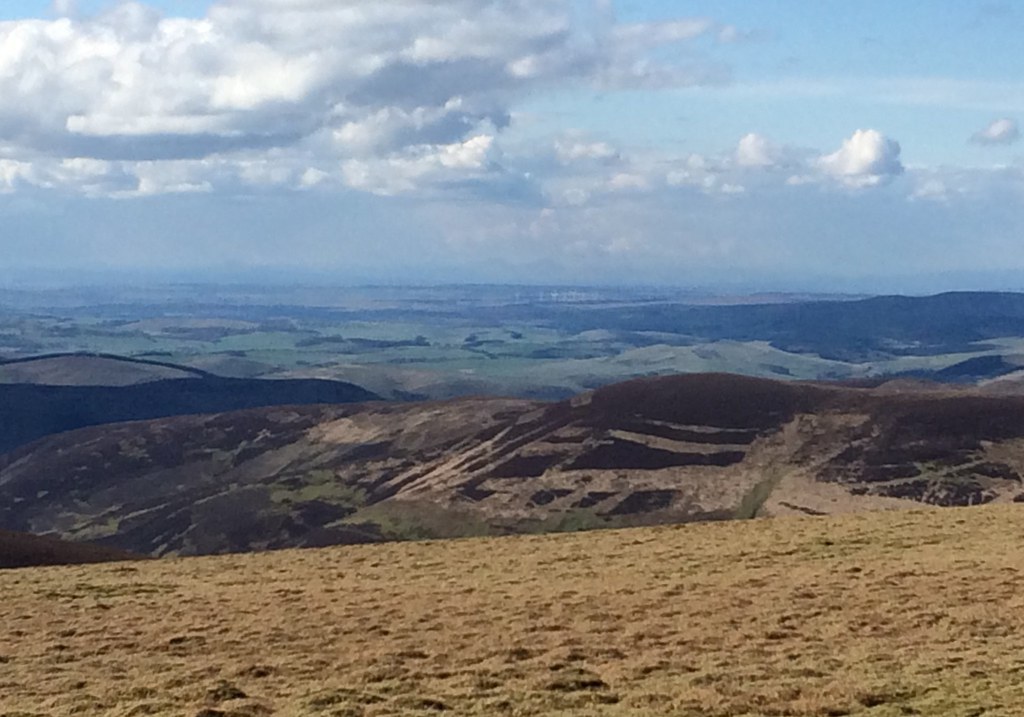 The going down to Hunt Law was a little softer, although there was a quad bike track to follow for much of the way. Hunt Law was unexciting in itself, but offered good views of Polmood Craig on Broad Law (its most interesting feature) and doen Stan Hope. 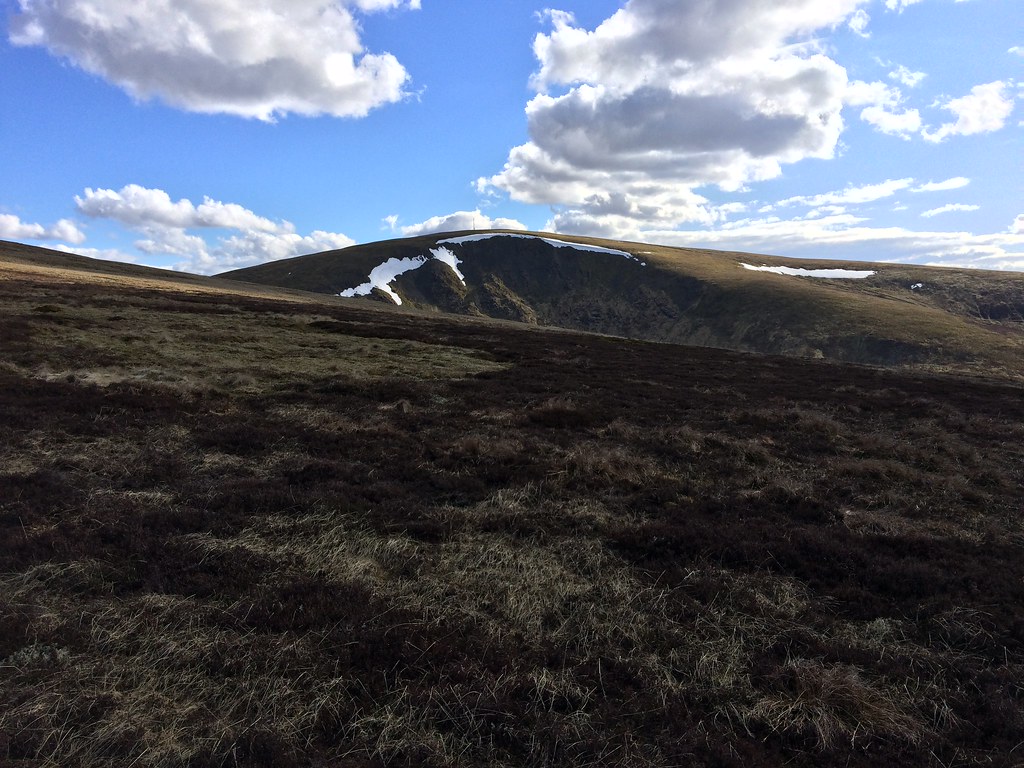 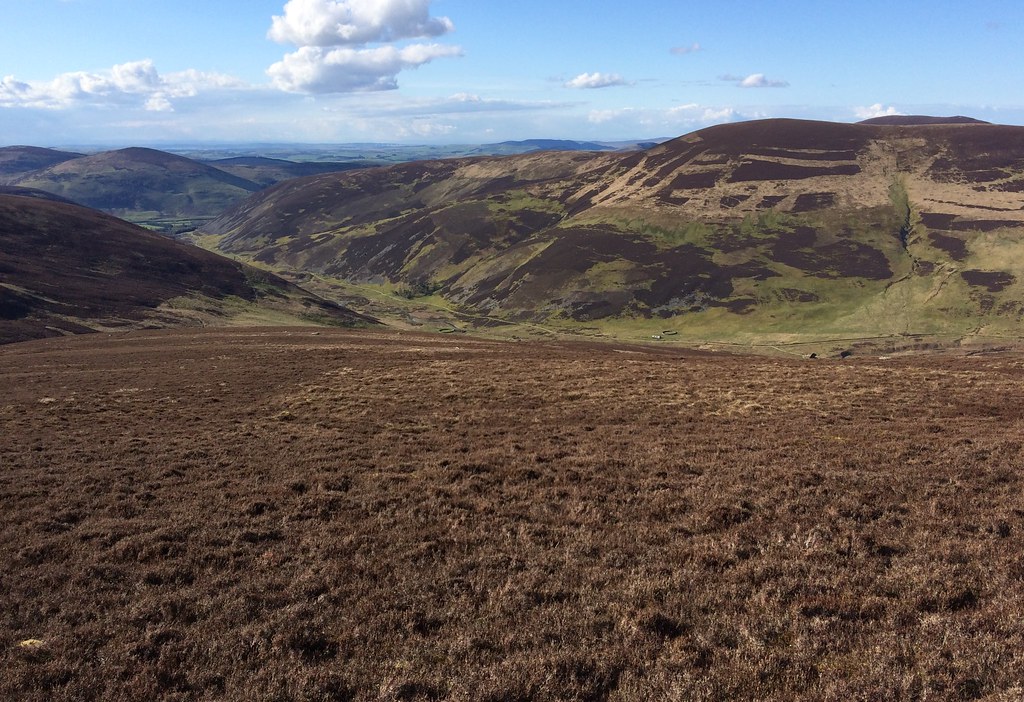 The quad bike track continued down to the Stanhope Burn, where the evening sun was just starting to cast things in a perfect light. Walking back out to Stanhope along this track was probably the second most pleasant part of the day. 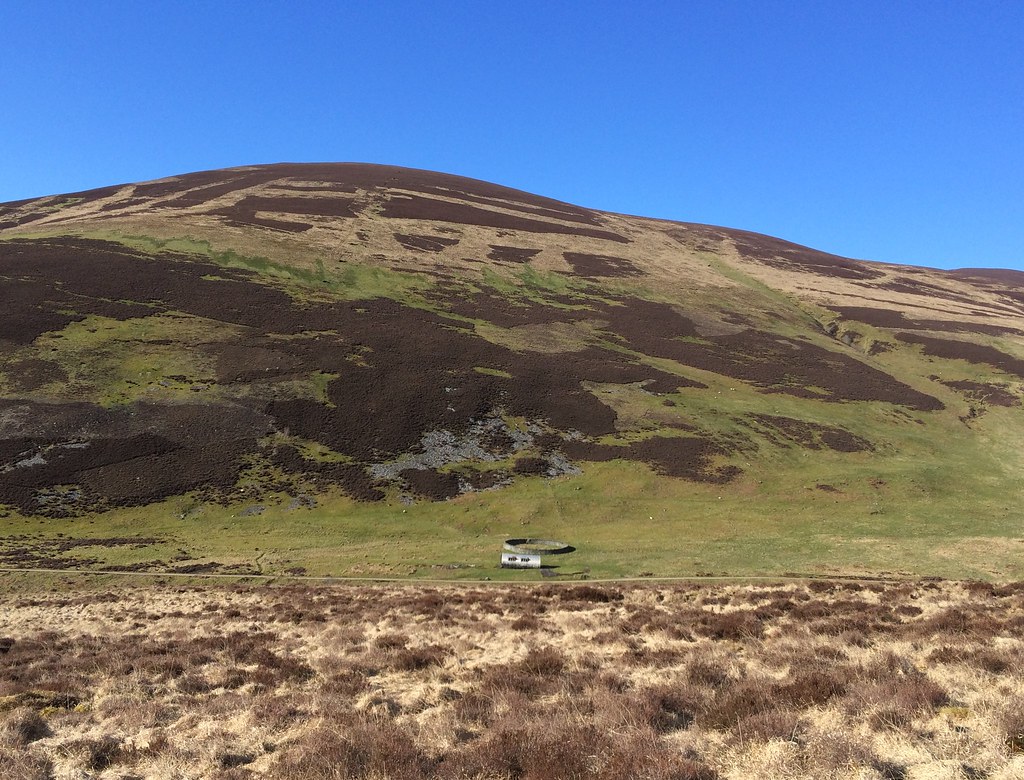 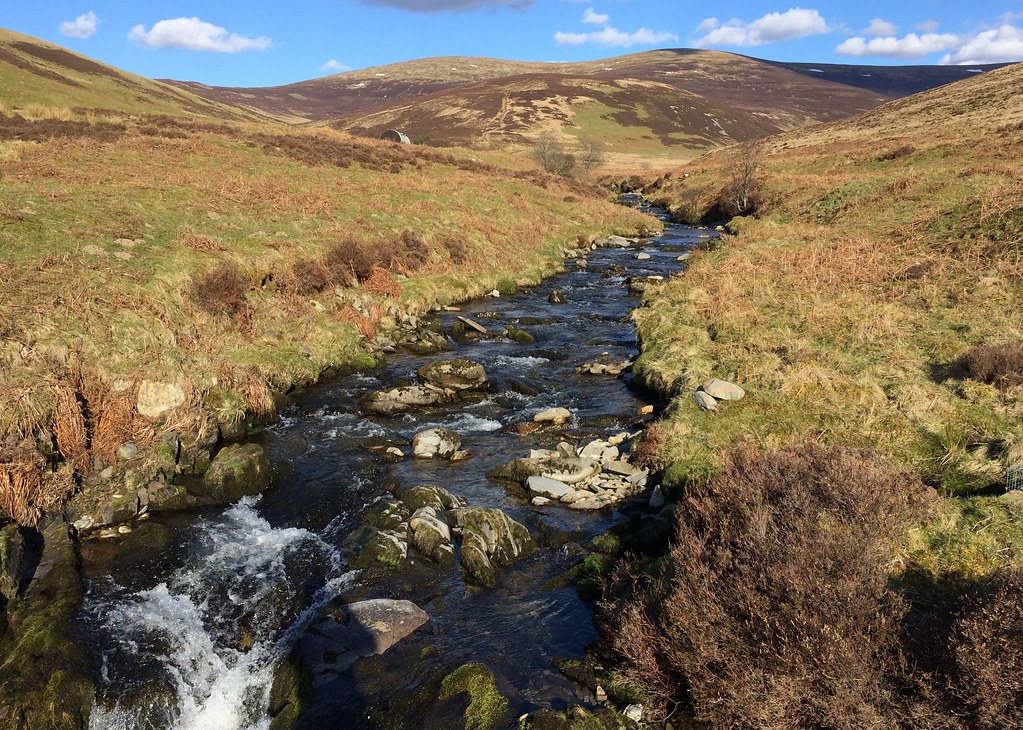 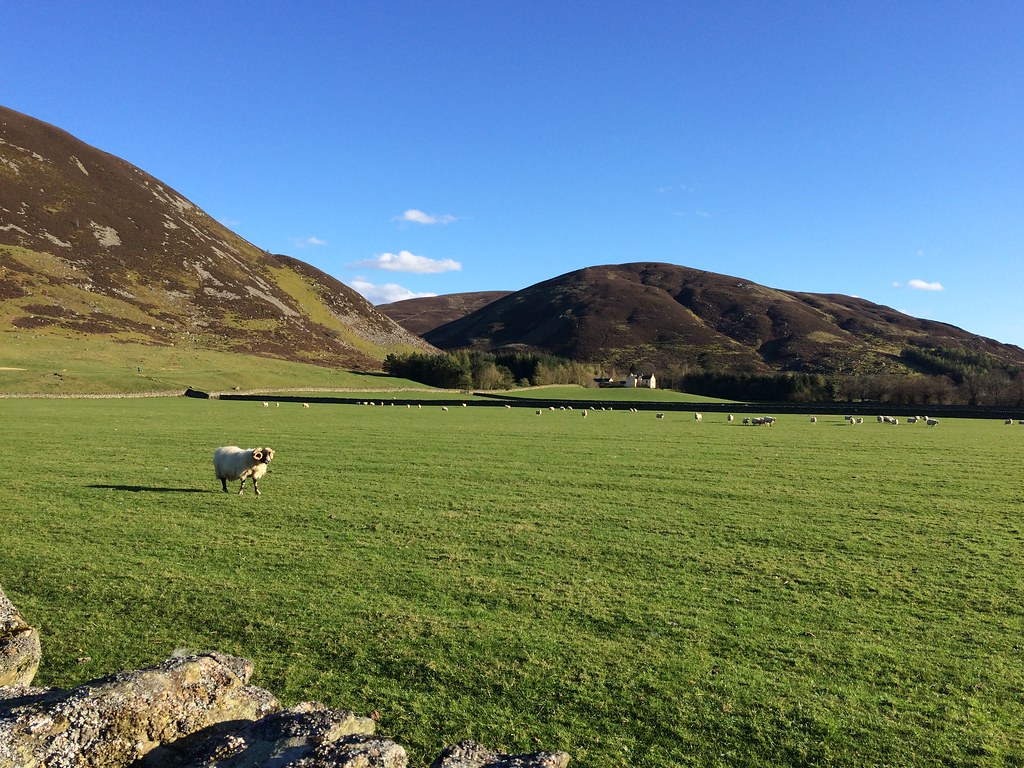 Although I took a wrong turn at Stanhope and had to nip across a field to get to the bridge, this was a perfect ending to the day. Although these hills are fairly unassuming, I had enjoyed today's walk far more than I would have thought possible. Rather than drive back down the M6 and A69, I decided to enjoy the rest of the evening and head cross-country, stopping in Hawick for a chippy, and admiring the sunset and red glow on the hills as I drove past Rubers Law and up to Carter Bar. I acrtually drove under Clockmore (New Donald on the northern shore of Megget Water) for the second time in the weekend intending to go up it, but I thought the short smash and grab would spoil the evening.

Re: A fine day on the Manor Hills

Cracking report Malky, our paths nearly crossed in the Peebles area (White Meldon), I did that after lunch and didn't see a single person.
You are a proper miles muncher and good to see you enjoying the Borders hills.

Re: A fine day on the Manor Hills

Good to see what the hills in this area are like. Not sure I'll ever get there (Assynt has priority...!) but your pics certainly make it looks like it's well worth a visit.