Another tale of two areas - Haystacks and Rannerdale Knotts

Another tale of two areas - Haystacks and Rannerdale Knotts


An uneventful night at Black Sail - no wild winds, no cows at the door, and I didn't even wake in the night to go out and look at the stars - just the quiet valley, and a morning far better than expected, because the forecast had been for low cloud over the hills.

I had one last Western fell to climb, which was Haystacks - hence the crossing the night before to sleep at the foot of it. I think I went wrong right from the start setting out - I had a vague idea that I wanted a path right from the hostel, didn't see one, and set off along the usual path, only to find myself working my way back up to where I should have been on a wet and sometimes non-existent trace of path, having failed to find the low road too. I was glad to find the cairn between the crossings of Tongue Beck and Loft Beck where the two versions of what seems to be generally known as the coast to coast path meet. 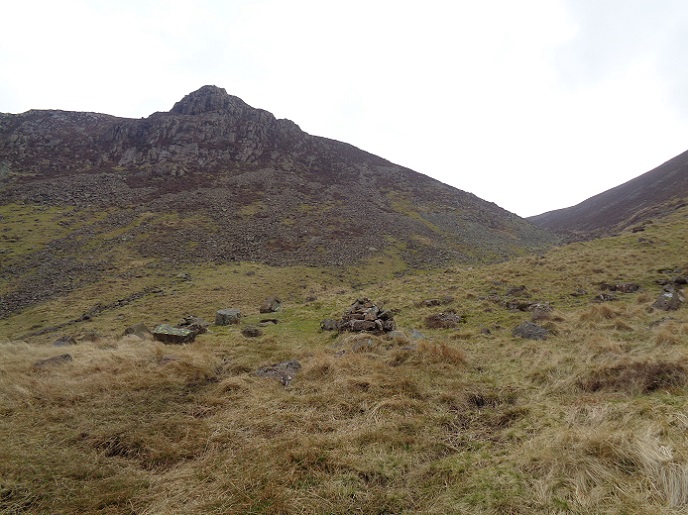 Beyond there it was back to stone steps, working my way up the side of the valley of Loft Beck - my legs were doing a bit better, but I still wasn't exactly fast. 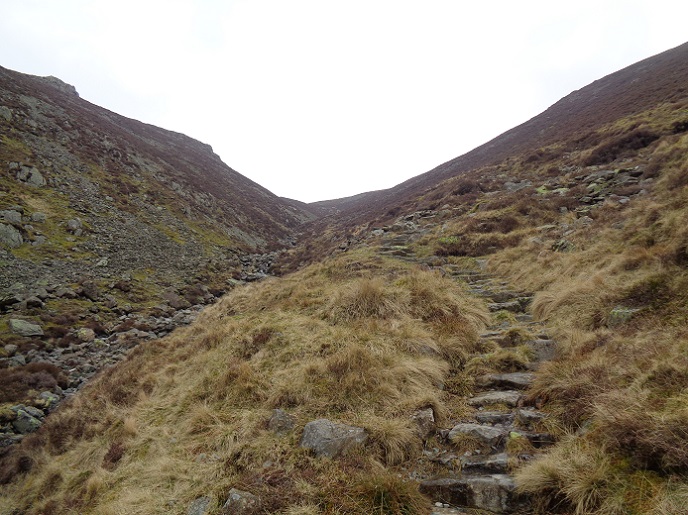 The climb had a pleasingly quick ending - so often a climb by a stream fizzles out into endless flatter ground at the top, but here I just suddenly found myself looking at the Ennerdale fence, a gate a short but wet walk away. 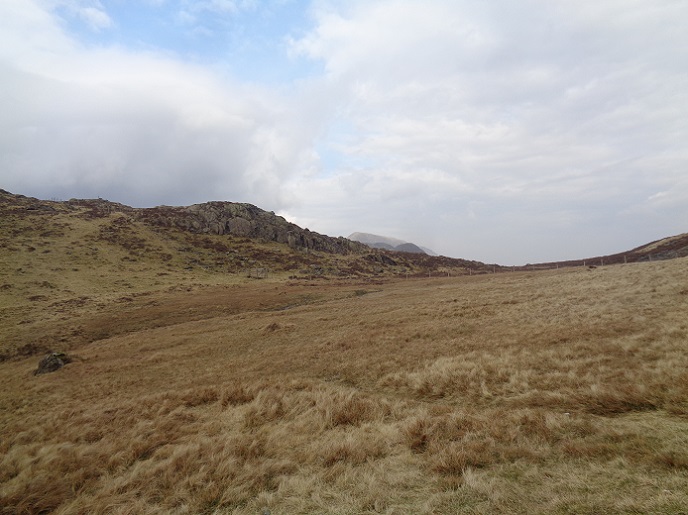 There is a lot of the summit of Haystacks - I knew that in theory, but hadn't taken it in practice. It would be a lovely place to explore and rest on a nice day, but this wasn't that kind of day - the wild wind was lurking up here, and it didn't feel like a day for the high hills, cloud or no cloud. 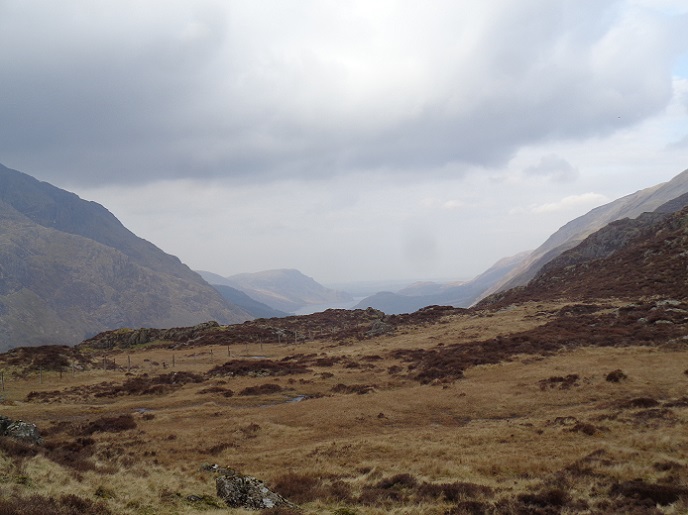 The path towards the actual summit followed the fence more or less, sometimes closely and sometimes wandering off, until I took a path leading over to Innominate Tarn, which is a pretty spot, even on a dull day. I like tiny islands, but there looked to be a lot of wet ground between me and them, so I didn't try to go and play. 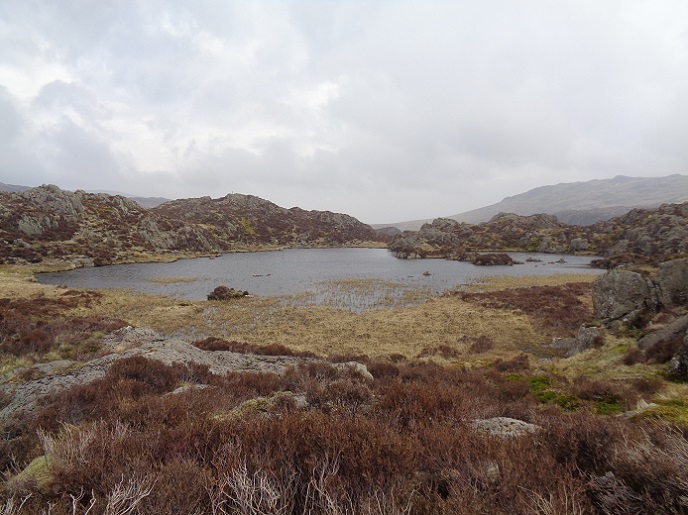 From the other side of the top I had changed valleys, looking down into a hazy Buttermere. 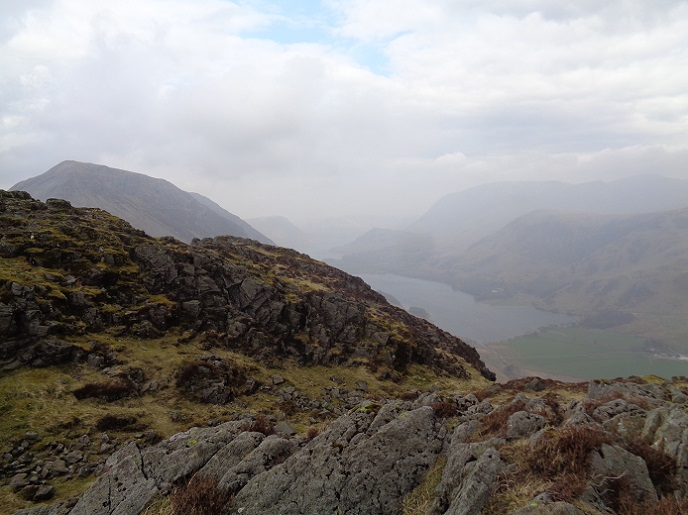 Two competing summits sit on a little rocky ridge, looking more or less the same - Wainwright's preference was for the northern one, but the one to the south had the bigger cairn, and looked higher to me. 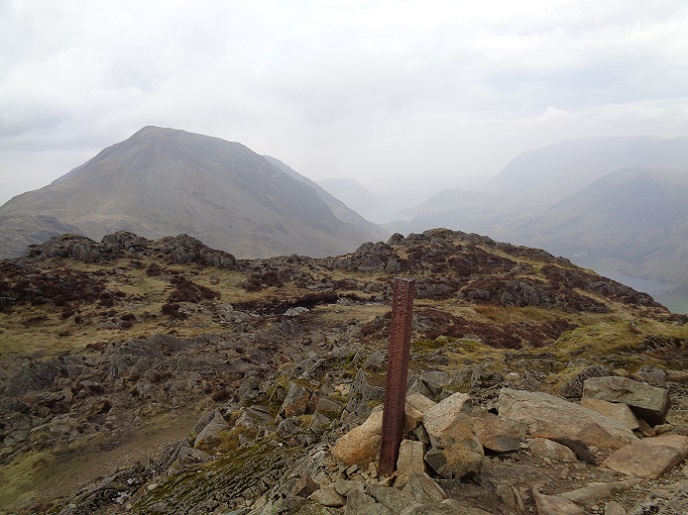 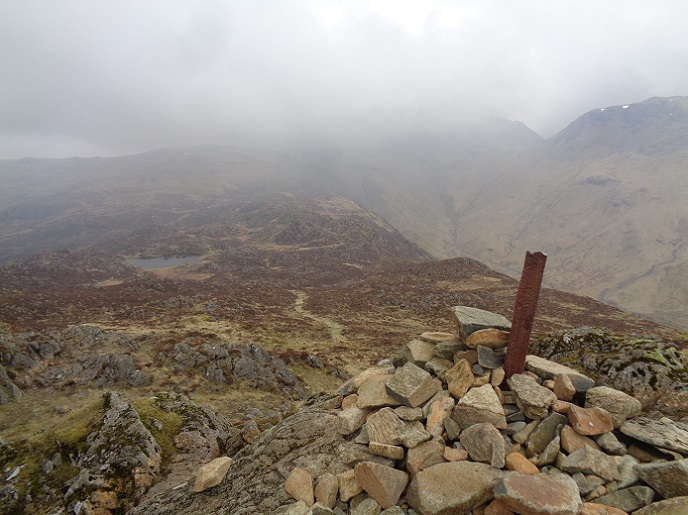 Beyond the summits was a little pool, and then the hill dropped away much more dramatically on the far side, a winding way over rocks and loose stones. I was slithering down awkwardly over one of the steeper bits, where everything was just a bit too far for me to do comfortably as a step, when I met a couple who warned me that there was scrambling down below, but there really wasn't - various bits of sharp rocky steps, but I'd done the worst. I'd had half a mind to go on along the ridge and leave the Northwestern Fells to look after themselves - the Hewitt summit of High Stile which I rushed past in a hurry keeps niggling at my mind - but High Crag looks horribly uninviting from below, even without the wind, and it didn't appeal. So on down the Scarth Gap path, much busier now on the Buttermere side, and still seeming a very long way - the last time I came over I thought it seemed endless in the pouring rain, but maybe it just was endless.

The lakeside path was even busier with wanderers, but I'd never walked along this side of the lake, and it is very pretty. In among the trees you didn't feel the wind, but it was sighing through the branches up above and whipping the surface of the lake into white waves. The lake stops quite suddenly, a straight flat edge with trees and bridges and fences, and it's not very obvious why it stops at all and doesn't just continue on as one lake - coincidental geography. The end of Buttermere

Along the path to the village the very first knots of blackthorn flowers were in bloom, and the youngest lambs I'd seen were following their mothers in the fields. I had optimistically hoped to reach Buttermere for an elevenses kind of time - it was more like lunchtime, but that didn't stop me buying cake to celebrate, and taking the obligatory picture of the old and new books (I don't know how the Western Fells got quite so battered - I don't remember anything in particular ever happening to it.)

Despite Wainwright's claim that his areas are divided so that you wouldn't walk in two at the same day, I've never managed to finish in an area one day and start another the next. The closest I've come is walking over Sticks Pass from Patterdale to High Rigg on a Sunday morning without actually going to an eastern summit - otherwise I've celebrated at Kirkstone while walking from Caudale Moor to Red Screes, Rosthwaite between Great Crag and Rosthwaite Fell, and Sty Head walking from Seathwaite Fell to Base Brown. Sadly Bassenthwaite Lake will probably prevent me from keeping up this record! If I was heading on into the hills on the other side then Rannerdale Knotts was the first stop, whatever came later, so I headed off along the road. After a while a little thread of path led up over the hillside but it then changed its mind and came back down again, with the right path starting a bit later on. I wasn't sure how far I was going to get - definitely not Grasmoor, and there wasn't a lot of point only gettting as far as Whiteless Pike, because that was a plain out and back - getting to Wandope would let me come down by Addacomb Beck, but was still unlikely.

At the junction with the path coming up from Rannerdale the right hand path did look more promising, and the walker I'd been following took it, but I was under strict instructions from Wainwright to take the left hand path, so I did, and it soon became more steps. After a worn bit and some more rocky steps the path came out between little rocky summits - the higher one there was a bit of a scramble, but once on it the actual summit turned out to be further along, just a walk away. The hills up above looked very tempting, but apart from time pressure the wind was once again reminding me that it wasn't a day for the higher hills. The little summit ridge was a nice wander, even with the rain coming on. The crest of the hill

If the rain had stayed persistent but gentle I would probably have kept on wandering over Ard Crags and Knott Rigg to pick up the Penrith bus at Braithwaite, but just as I was making this plan it suddenly turned properly wet, and I decided that discretion was the better part of valour and turned for the Buttermere bus stop.

There was a whole grid of green paths here and it wasn't obvious which went where - I picked one that looked like it was taking a direct route down and went for it. I was expecting a damp wait for the bus going round the 'wrong way', but it was about 10 to 3, and I realised that if the bus I had meant to get was the 17:18, it was quite likely that there was a 15:18 which I should make. Which I did - realising that I hadn't had any lunch, because it had been too wet to eat it on Rannerdale Knotts, I got off at Borrowdale hostel as I knew they wouldn't mind me buying a cup of tea and eating it there - and there are plenty of buses up from Borrowdale. Then up for a wander around a very Sunday sort of Keswick, where of course it had turned dry, and to Penrith and home - a bit of a fizzled out ending, but there was no point getting really wet for two little hills that I can tag on the next time.