Keelylang is arguably the least interesting of Orkney's nine Marylins with a big TV and radio relay station at the top, right next to the summit.
The usual route up is from Cruan stables, straight up the rough service road to the transmitter station. For a little variation and interest, I parked at the Cuween Hill Tomb and with our wee terrier Mij in tow, followed the St Magnus Way path to the ridge with views opening up over Firth Bay to the north and Ward Hill, Mid Hill, Scapa Flow and Hoy to the south and west.
Once up at the top of the ridge it seemed best to set off across tussocky grass, boggy patches and general spongeyness in the direction of Keelylang, meeting the road about half way - there's a bit of a scramble down to the road, but even this chubby 56-year-old managed it comfortably. St Magnus Way posts appeared at odd intervals, mostly nowhere near a path so it was best to ignore them altogether.
It was far from an unpleasant walk up the road, the damp weather giving way to dull, but dry conditions with a light breeze. Views on a clear day would be spectacular with nothing between the summit and Orkney's North Isles. Even so it was possible to see over to Rousay to the north and Hoy and South Ronaldsay to the south with sightings of no less than seven other Marylins, even if Blotchnie Fiold in Rousay and the Hoy Hills were a wee bit hazy.
With time pressing if we were to make it to the ferry home to Westray, we went all the way down to the stables along the track, dropping down to the Old Finstown Road to take us back to the car. Firth Bay from above the tomb. 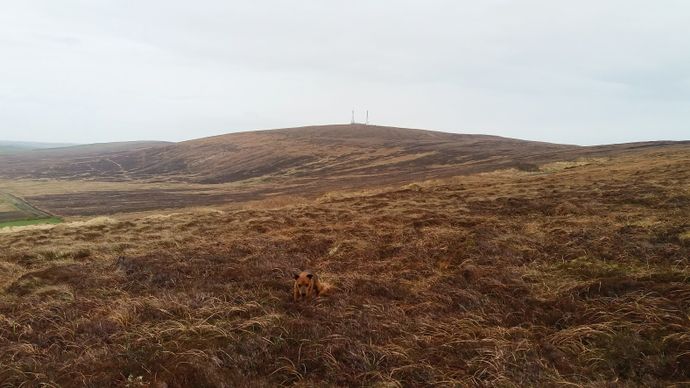 St Magnus Way turns off towards Orphir along this old peat cutting. Transmitter station at the top of Keelylang. Carving on the small summit cairn