Hill of Stake and Misty Law from Muirshiel

Hill of Stake and Misty Law from Muirshiel

Hill of Stake.gpx Open full screen  NB: Walkhighlands is not responsible for the accuracy of gpx files in users posts

First day out on the hills this year. I knackered my ankle last year and it still doesn't feel 100%, and my knees have started making some rather alarming noises whenever I stand up, so I thought I'd break myself in gently with something not too steep or strenuous. I picked this walk because it's quite close...Hill of Stake is the nearest hill on my Hills Climbed map that I'd yet to turn blue...and because I'd had a go last year and had to abandon on account of some horrendous weather.

No such problems today. Bank Holiday Monday plus glorious weather equalled one rammed car park at Muirshiel visitor centre, but luckily someone was leaving just as I arrived at midday so it didn't take me long to get booted up and on my way, following signs for the Mine Track. Shortly after leaving the visitor centre car park there's a blocked off bridge...I'm sure it would be fine to walk across, but there's no need as just down the track there's another bridge that doesn't involve climbing over danger signs... 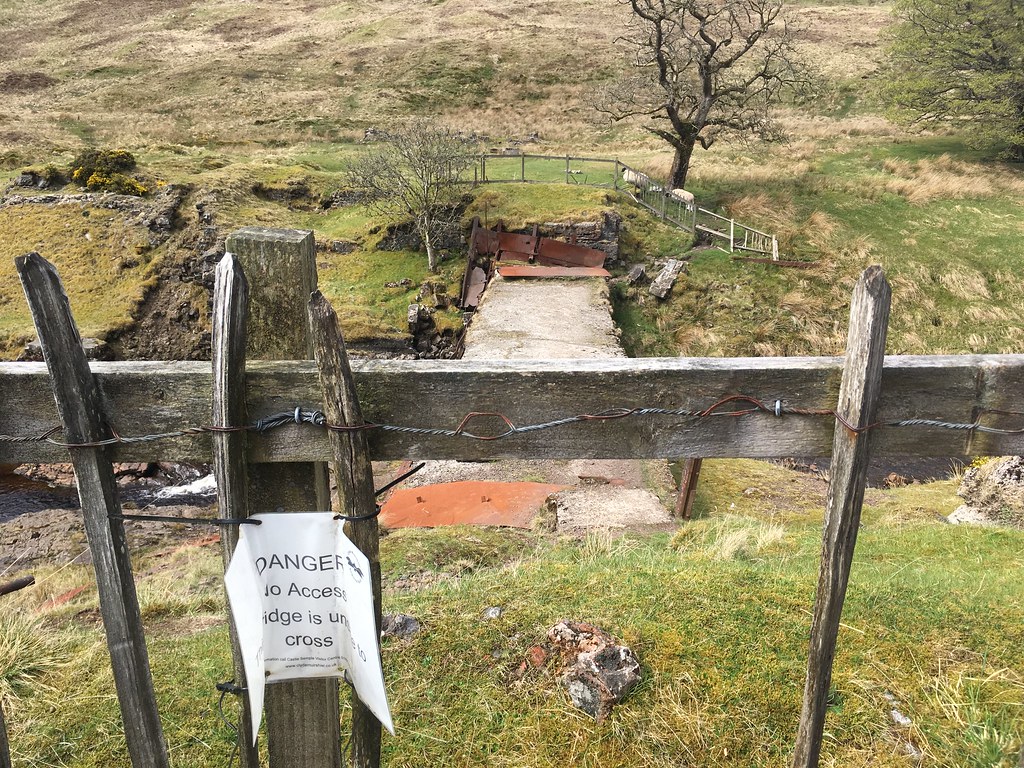 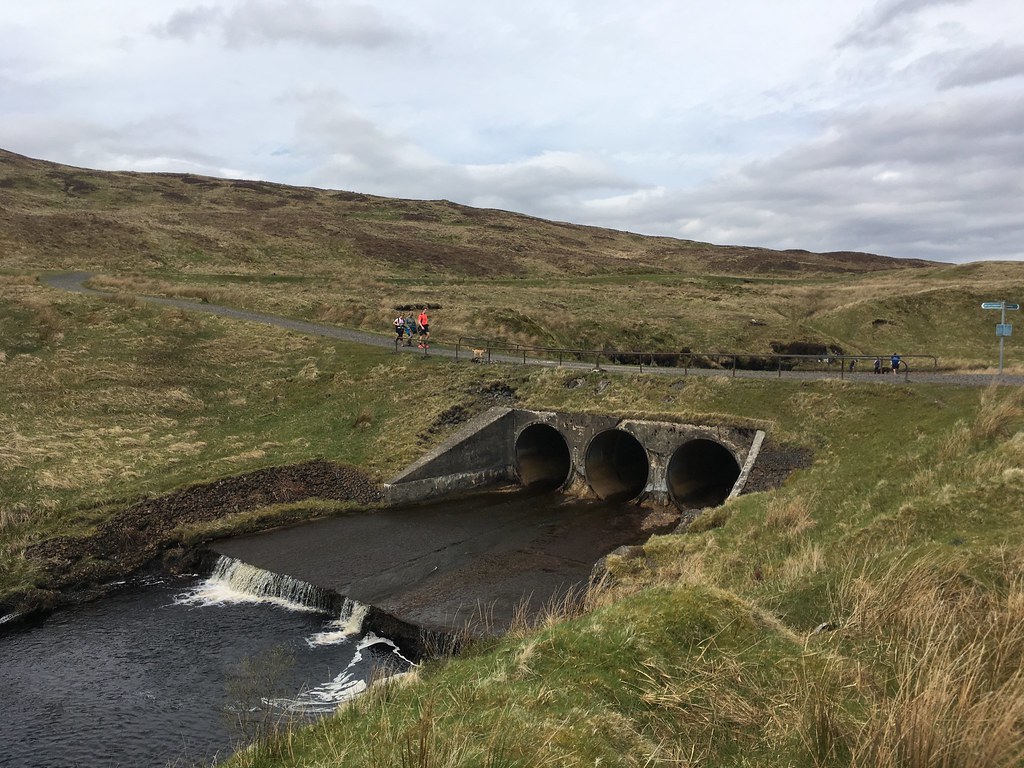 It's about a 4km walk along a gently climbing track to the old barytes mine. It's a pleasant walk with lots of frisky birds all around (skylarks, wheatear, buzzards) and eventually decent views north towards Ben Lomond and the Trossachs. It's worth having a look around the mine when you get there and there are some information boards up, but having already explored during my previous visit I just headed up the path that runs between the mine workings and a small stream and into the hills proper. 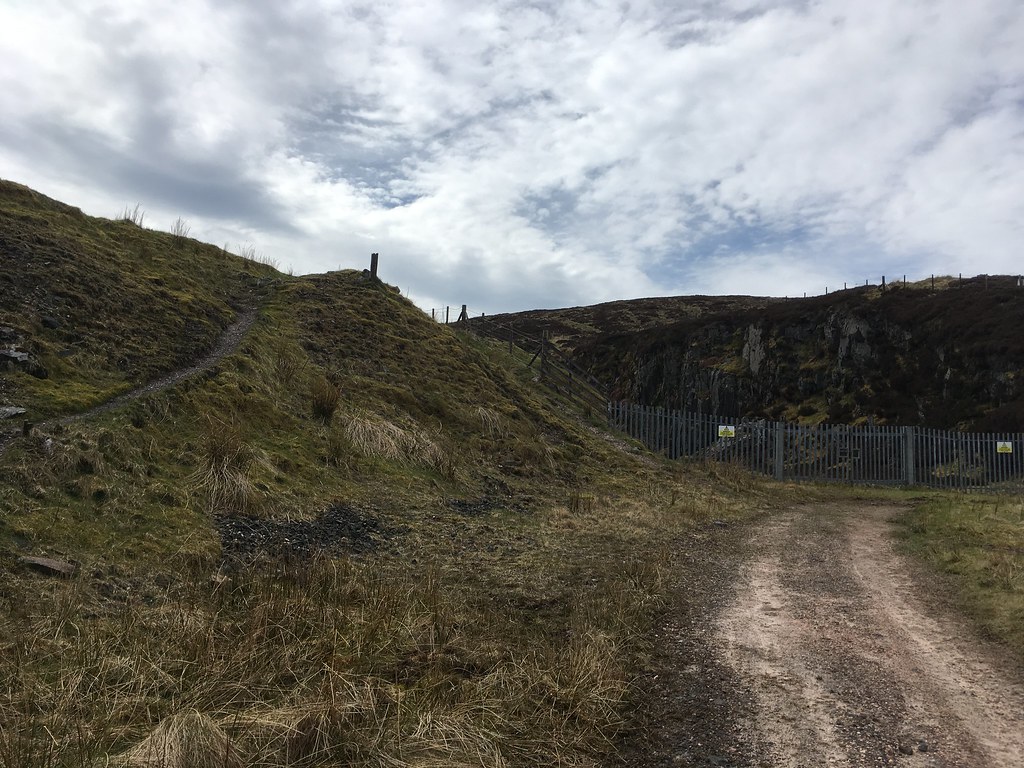 Mine works and path leading into the hills

The path peters out once the mine workings are left behind and it's just a matter of heading roughly south-west towards an obvious pass between two hills...at this point the Hill of Stake isn't actually visible. Nobody enjoys wading through heather, but it wasn't too bad. 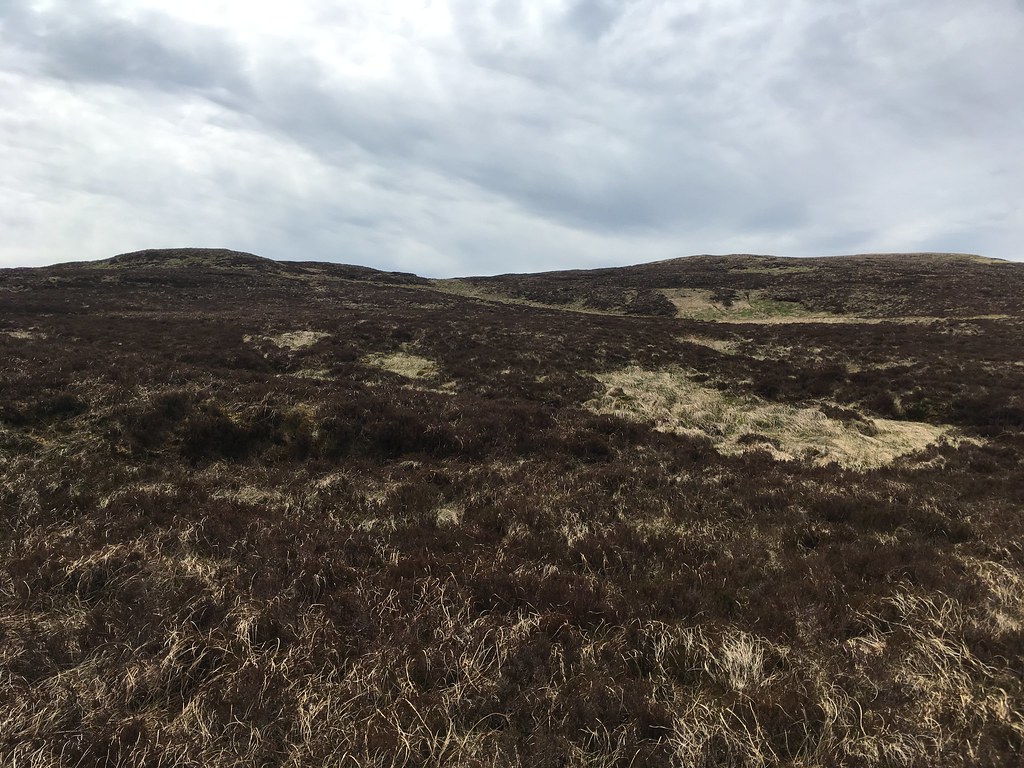 Hill of Stake lies beyond these two hills

From the pass between the two hills, the Hill of Stake is clearly visible - you can just about make out the trig point on the summit. Again, there's no path, just a lot of tussocky grass and heather to negotiate. I headed slightly to the right rather than heading straight up and picked up a fence line that led to the summit. 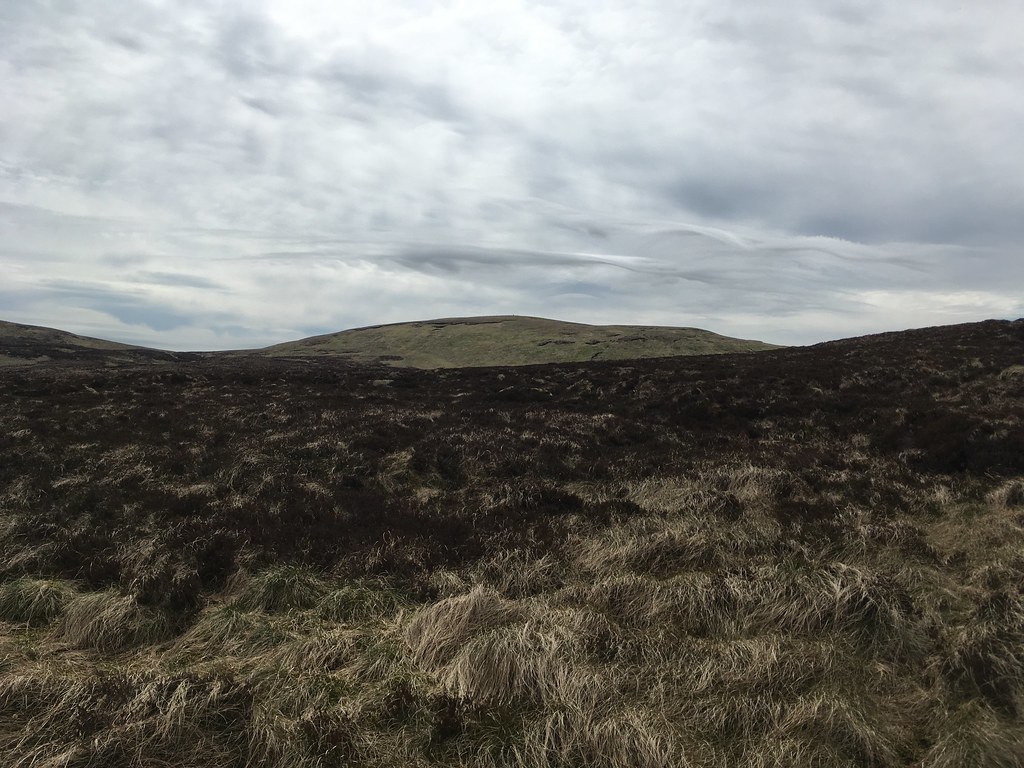 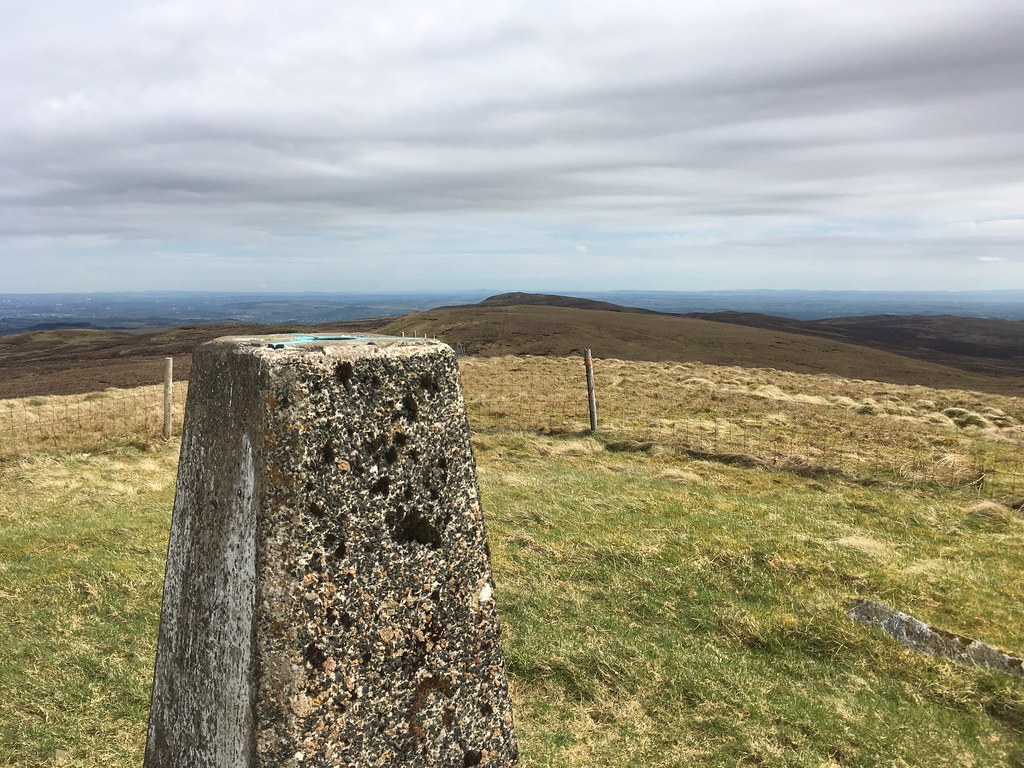 Hill of Stake summit looking over to Misty Law 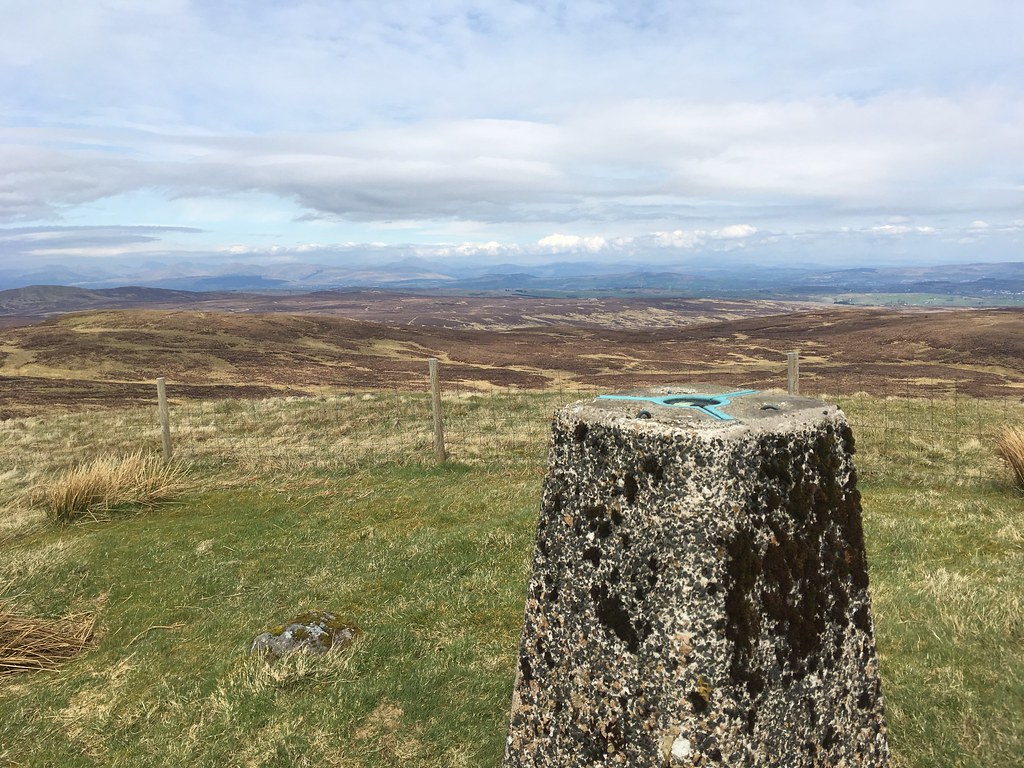 From here my preference for circular walks kicked in and I decided I might as well head back via Misty Law rather than returning by the way I'd come. The fence leads you most of the way to Misty Law, and there are the occassional small cairns to keep you on the right track. This stretch is VERY boggy. It certainly exposed my boots' lack of waterproofness...and this is after a good week of dry weather. God knows what it would be like after a wet spell... 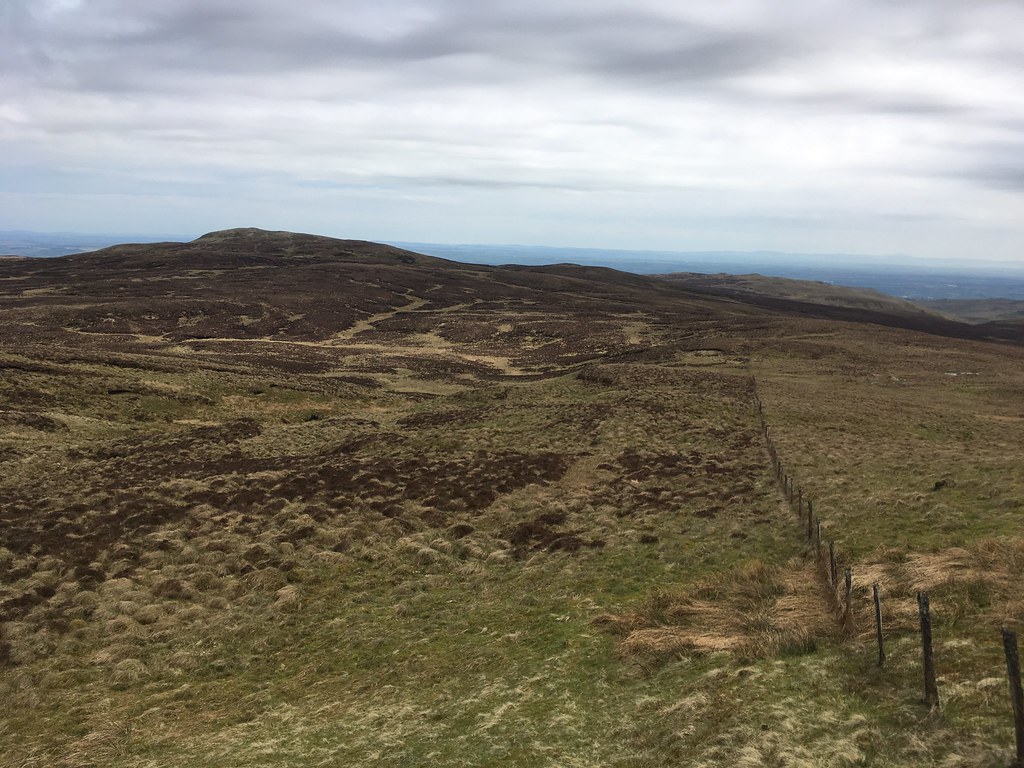 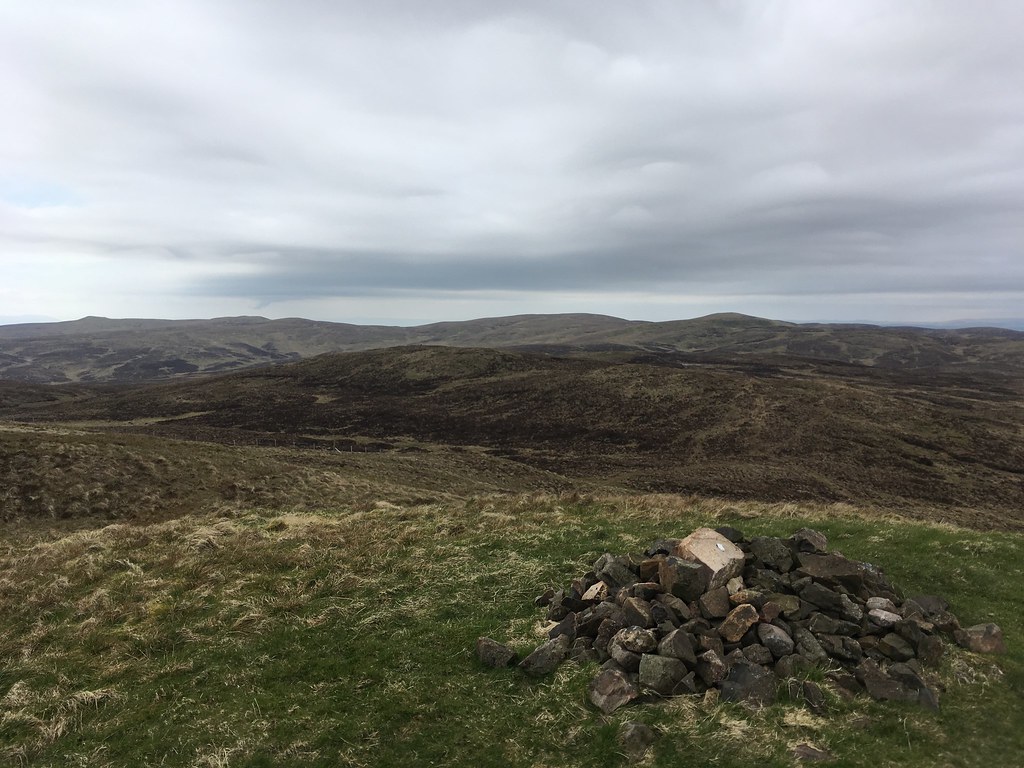 Summit of Misty Law, looking back to Hill of Stake

From the summit of Misty Law there's a faint path leading off the hill quite steeply down to a 4x4 track. I followed this track for a few hundred yards until just before it crosses the Cample Burn and then headed back into the tussocky, heathery mess and waded my way downhill in the rough direction of the visitor centre. Not pleasant going at all, but eventually you arrive back at the River Calder. The footbridge marked on the map at the visitor centre is no longer there...I found a spot to cross, but there's always the old disused bridge about 100 yards upstream if none takes your fancy.

So not the most picturesque walk in Scotland, but it's got some nice views and lots of birdlife at this time of year, and it got my old legs working again, so all in all a good day out.