Ten Fannichs traverse - with some snow and a wild camp

Ten Fannichs traverse - with some snow and a wild camp


I'd decided I wanted to get in a round of the Fannich Munros - including Fionn Bheinn - so set off for a fun weekend traversing the range. Wild camp traverse end to end, using the Kyle railway line for access.


Fannich10.gpx Open full screen  NB: Walkhighlands is not responsible for the accuracy of gpx files in users posts

Started off with an early rise to catch the 0633 train up to Inverness from Edinburgh, then over to Achnasheen arriving by just after midday. Coincidentally, two other sets of walkers arrived at the same time as the train, and were heading up towards Fionn Bheinn as well. I set off to stretch my legs first but stopped to re-tie my boots and put on gaiters just above the gate leading up the stream where they overtook me. I would later pass them crossing the boggy ground over the approach to Fionn Bheinn later. The climb was fairly easy going, except for the last bit of Fionn Bheinn where I was feeling the weight of the pack a bit. Windy near the trigpoint, but great views into Loch Fannich and to the West. I came off down the northern grassy slopes down into Strath Chrombaill, crossing the first obstacle challenge of the walk, a large water pipeline! The concrete foundation plinths every few metres were just low enough to clamber over the structure and onto the service track, which I followed all the way around to the head of Loch Fannich. I also picked up a nice stag antler down the slope, which I debated taking home as a memento (I always think they are good luck). It wasn't too heavy, so I strapped it to my pack and headed on. It would later come in handy.

I followed the track along the river below An Sguman, before deciding to take a diagonal line up across the slopes to reach Beul Dearg. Again, a struggle with the pack, tent, camping stuff and 2 days' worth of food, but was eventually up on the bealach Beul Dearg after much sweating. I thought about camping here as it was early evening now, bu after a brief rest and lie down on a flat rock to stretch out a bit, I headed on up Ceann Garbh a'Chailleach where there is an impressively built dry stone wall all the way to the summit! The winds here were strong, and it was a struggle to walk without leaning into the wind, but higher up on A'Chailleach it was surprisingly calm. I sat down to admire the views and rest for a bit before heading off down to Bealach Toll an Lochain where I would camp. Pitching the tent took far longer than it should have due to the wind. The bealach is around 700m but the winds were difficult to walk upright in. The first attempt to pitch in what looked like a sheltered spot was aborted due to the winds picking up, despite intial efforts to weight down part of the tent with rocks etc. I gave up after about an hour, but I found a better second spot just on the edge of an outcrop overlooking Loch Toll an Lochan, hidden from the view of the Loch Fannich side. I was too exhausted from the tent ordeal to bother cooking, so just had snack and went off to sleep. I was up fairly early and packed away to set off just after 7am. Headed up to Sgurr Breac, then down the longish descent into the bealach where I picked up some more water as was worried there would not be other opportunities looking at the route ahead. I took a route up the grassy, boggy slopes up to the bealach between Sgurr nan Each and Sgurr a'Chadha Dheirg, paused for a rest, then up over Sgurr Each and down to the next bealach and finally, what I thought would be the biggest climb of the day, Sgurr nan Clach Geala. I paused a lot on the way up, partly from exhaustion and partly to admire the views over the range, and the big snow blocks that had presumably broken off from cornices earlier in the season. Reached the broken trigpoint at SnCG and had lunch. Sat up there for a good half an hour taking it all in. View towards Sgurr nan Clach Geala from Sgurr Each A lesson in winter conditions in May...

Things got interesting on the descent around Eagan Tuill Bhig, the main route off Sgurr nan Clach Geala if doing the full traverse clockwise. The path was close to the near-sheer drop into the coire, and it was also covered by large hard-ish snow patches in sections. I cursed myself for not packing winter gear (lesson learned...) There was no way I was going to attempt the descent solo this way with a heavy pack and no proper gear at this height. The snow patch formed a long smooth run out into the coire below to the left, and a slip would turn into a fall of several hundred metres from here. I was reluctantly debating a turn back, when I spotted a potential route down the (snowless) grassy slope just behind me, where I could take this down and cross at a safer height and contour round onto the bealach. I clambered down carefully to around 850 metres using the grassy slope, but there was still a short section of hard-ish snow that had to be crossed. It was soft enough to kick in steps (at least I'd worn winter boots...) and so I made my way across this smaller section using the stag antler as a (surprisingly effective) ice axe to steady myself across the slope, which was still quite steep at this point, and there was still a bit of a slide down had I slipped, but not as consequential as the one 200m further up would have been. I am not a huge fan of descents as it is, especially with a heavy pack, so I sat and had a pause to let the adrenaline pass once I had crossed this patch before heading off over to the bealach and then up Meall a'Chrasgaidh. It was one of only two snow patches I would encounter in the whole traverse (though the second one later was easily bypassed). Sheer drop to the right, 200m run out to the left...actually looks rather tame from the photo....

I returned from the Meall down to the bealach again, then up over Carn na Criche and to the foot of Sgurr Mor. This was a short but steep climb over rocky, scree-like slopes. Most of the boulders were firmly in place, so footing was not the problem, but I felt unbalanced in places despite my best efforts to keep the weight low down in the rucksack. It was strenuous, but eventually I was at the top of Sgurr Mor enjoying the views and some oatcakes. From Sgurr Mor I headed over to Beinn Liath Mhor Fannaich, leaving my bag at the bottom of the Beinn. (Why I hadn't left the rucksack at the the bottom of Sgurr Mor instead and saved myself the 2km back and forth along the ridge I don't know...there was even a stone shelter near the bottom of Sgurr Mor I could have left it in...) I practically skipped up and down Beinn Liath Mhor Fannaich without the pack, and was heading over to contour round the base of Sgurr Mor again when I encountered another snow patch. There were no previous tracks in this one unlike the previous one descending Sgurr nan Clach Geala, and there was no way to safely judge the stability of the large snow-laden coire, so I made a very short steep climb up and around, clambering on all fours in places due to the gradient and rucksack-centre-of-gravity combo. Relieved to be finally onto the 'easier' peaks of the walk, I enjoyed a jaunt up and over Meall na Peithirean and finally up and over Meall Gorm, the ninth Munro of this circuit. I'd originally planned to do An Coileachan on the same evening, descending to camp by Loch Fannich in the late evening, but the Bealach Ban was a lovely spot to camp, with views towards the Beinn Dearg range and Loch Fannich on either side. I had time as well to set up the stove and enjoy a hot meal, do a bit of reading, before falling asleep - tired but satisfyingly so - at 9pm. 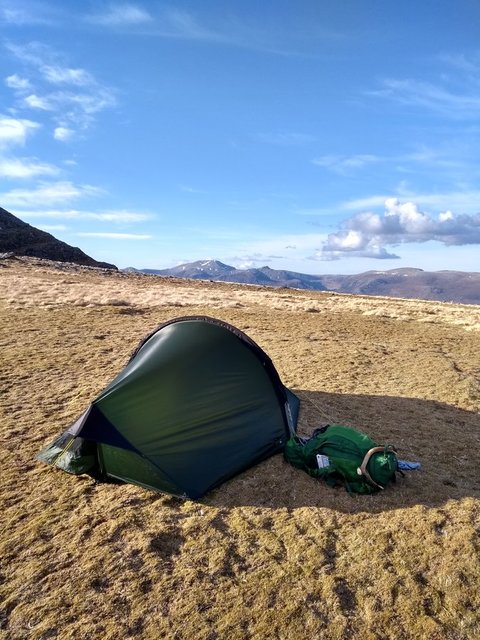 It rained during the night, and was still going a bit in the morning, but it turned out not to be as bad as it sounded under the tent canvas. I packed up at a leisurely pace, having nearly all day to get up and over An Coileachan and down to Lochluichart station. An Coileachan was totally obscured by low cloud when I had woken up, but was visible again when I got moving. Views and weather were certainly more 'atmospheric' today, and I was glad I had saved one hill for the last day to add some interest to the long walk back. 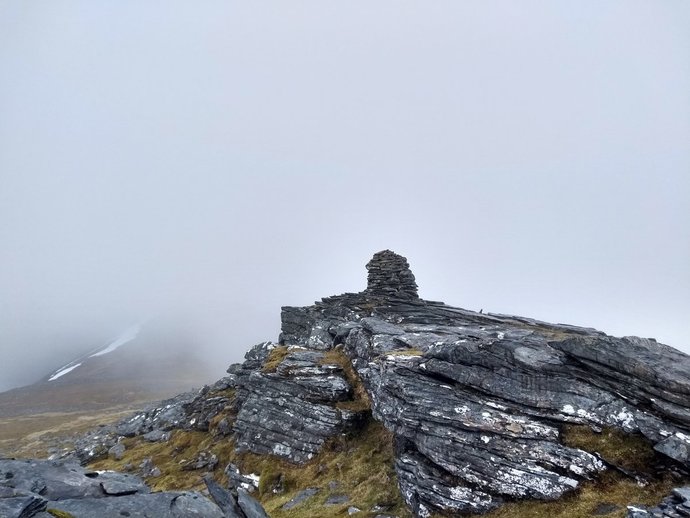 The weather brightened up by lunchtime, I stopped in the forest for lunch on the way down the estate road to Lochluichart, where I had a while to wait before catching the train back to Inverness and then to Edinburgh, getting back home around 11pm. 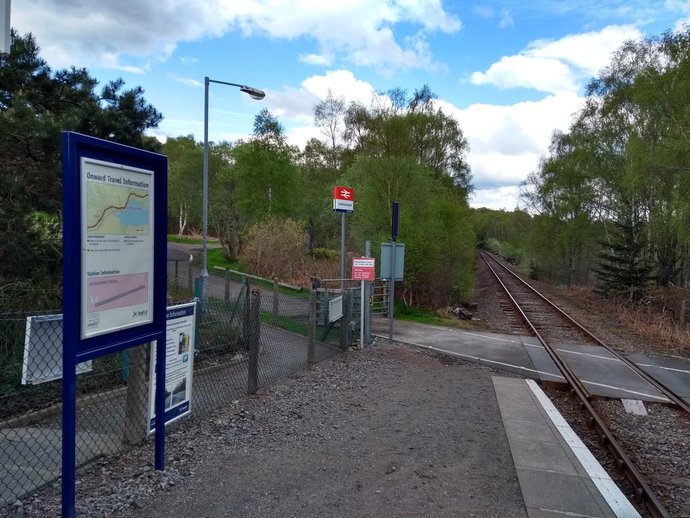 Lochluichart station...waiting for the only train of the day back home

Re: Ten Fannichs traverse - with some snow and a wild camp

Not a midge in sight either! Should have taken a (proper) ice axe and crampons though to avoid the alternative descent from SnCG...oh well lesson learnt.

Re: Ten Fannichs traverse - with some snow and a wild camp

That's an impressive outing. I did like your fortuitous use of the antler as ice axe. I wouldn't have thought of doing a loop that included Fionn Bheinn - did once contemplate doing the 9 from Fannich Lodge but the weather got in the way.

With snow patches still lingering it is hard to know just what kit to take on a longer walk - I felt a bit daft taking axes into Ben Alder this weekend, where we didn't need them, although as I'd abandoned winter boots for something less footsore it was a reasonable bit of precaution to take.