Returning to the starting point above Bridge of Orchy.

Returning to the starting point above Bridge of Orchy.

One of the reasons for this choice was it would give Denise the chance to do a munro that I have done and it would give me a chance to do a new one too, the second reason was that Beinn Dorain was the first munro I had climbed, this was on a school trip back in May 1974 so it was due a revisit, Beinn an Dothaidh would be new to both of us

We set off from the Travelodge fairly early, the roads were quiet so we made good time and arrived at the carpark by the hotel in just under an hour and a half.

There was a bit of cloud cover on the tops which looked the sort that would burn off as the day got warmer, the weather was coming from the S.W and it was looking fairly settled

We set off towards the station taking care crossing the road, through the underpass and on to the open mountainside. The sky was bright, there was a bit of cloud floating around the tops but the views were good and the air was crisp and clear. 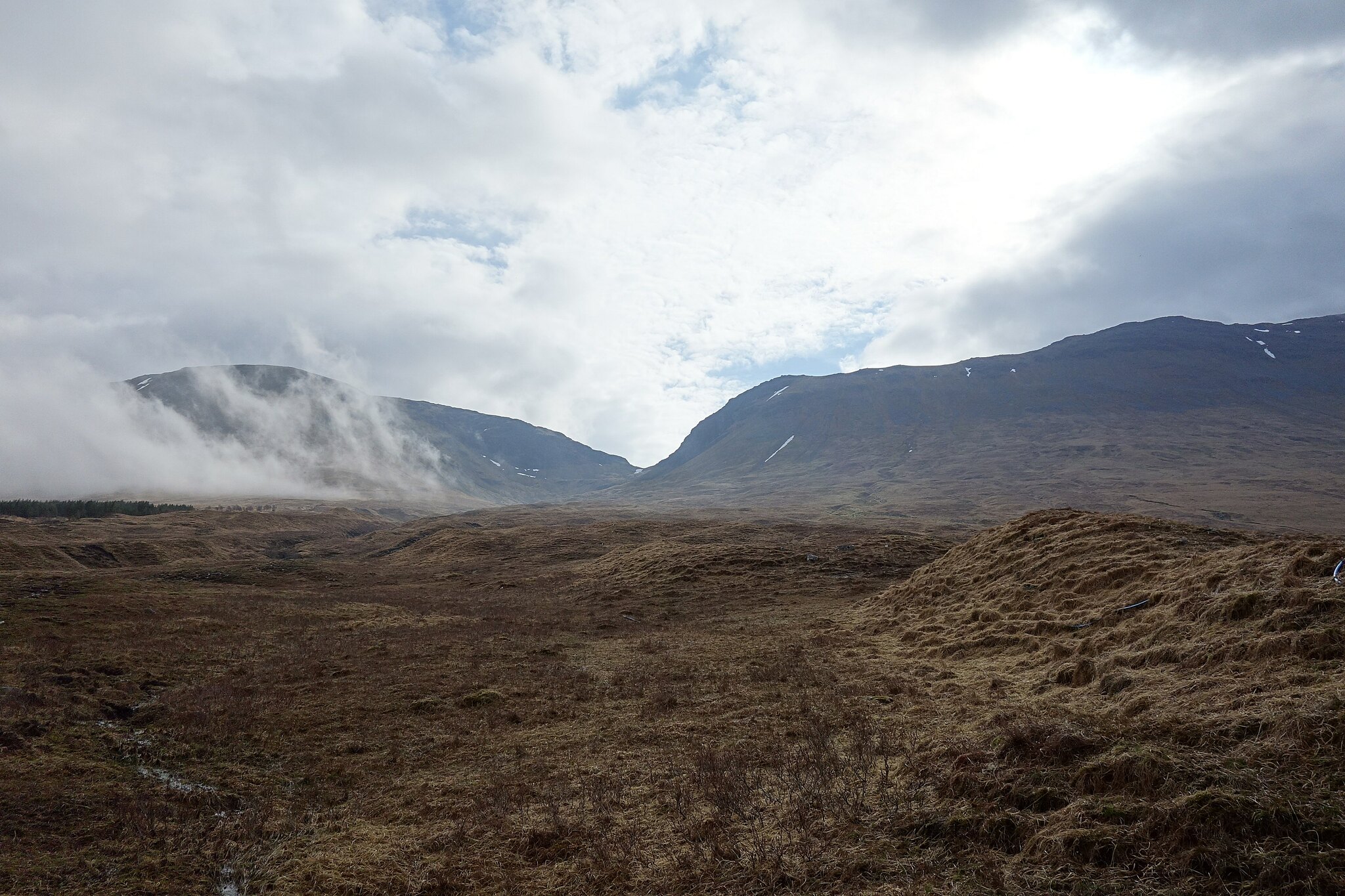 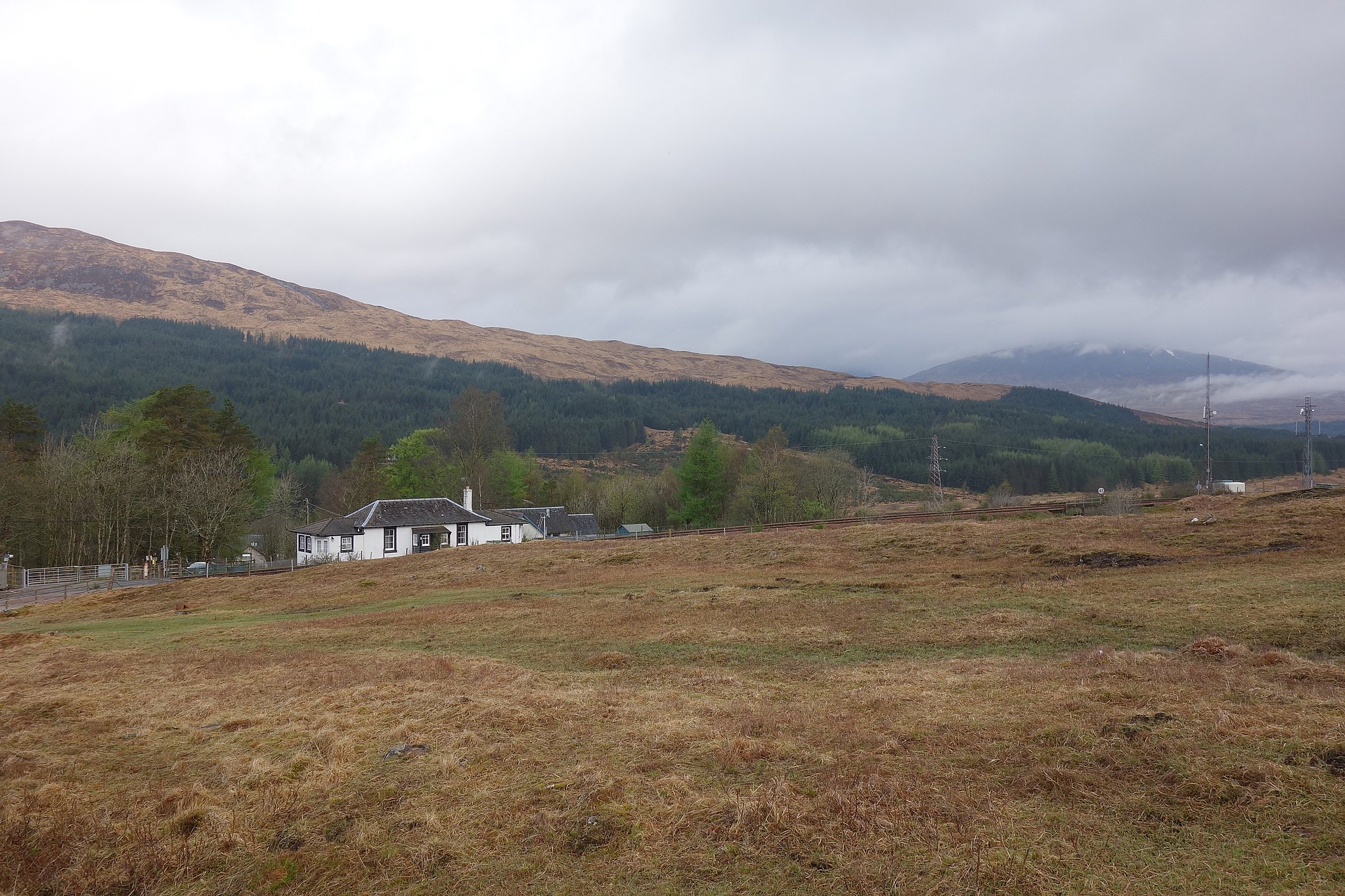 Setting off up the path was a bit of a boggy affair to start with, it did get better a couple of hundred meters further on and this was the pattern for most of the way up to the bealach, some boggy bits wider than others with some clever avoiding tactics required in order not to end up nose first in the squidgy bits 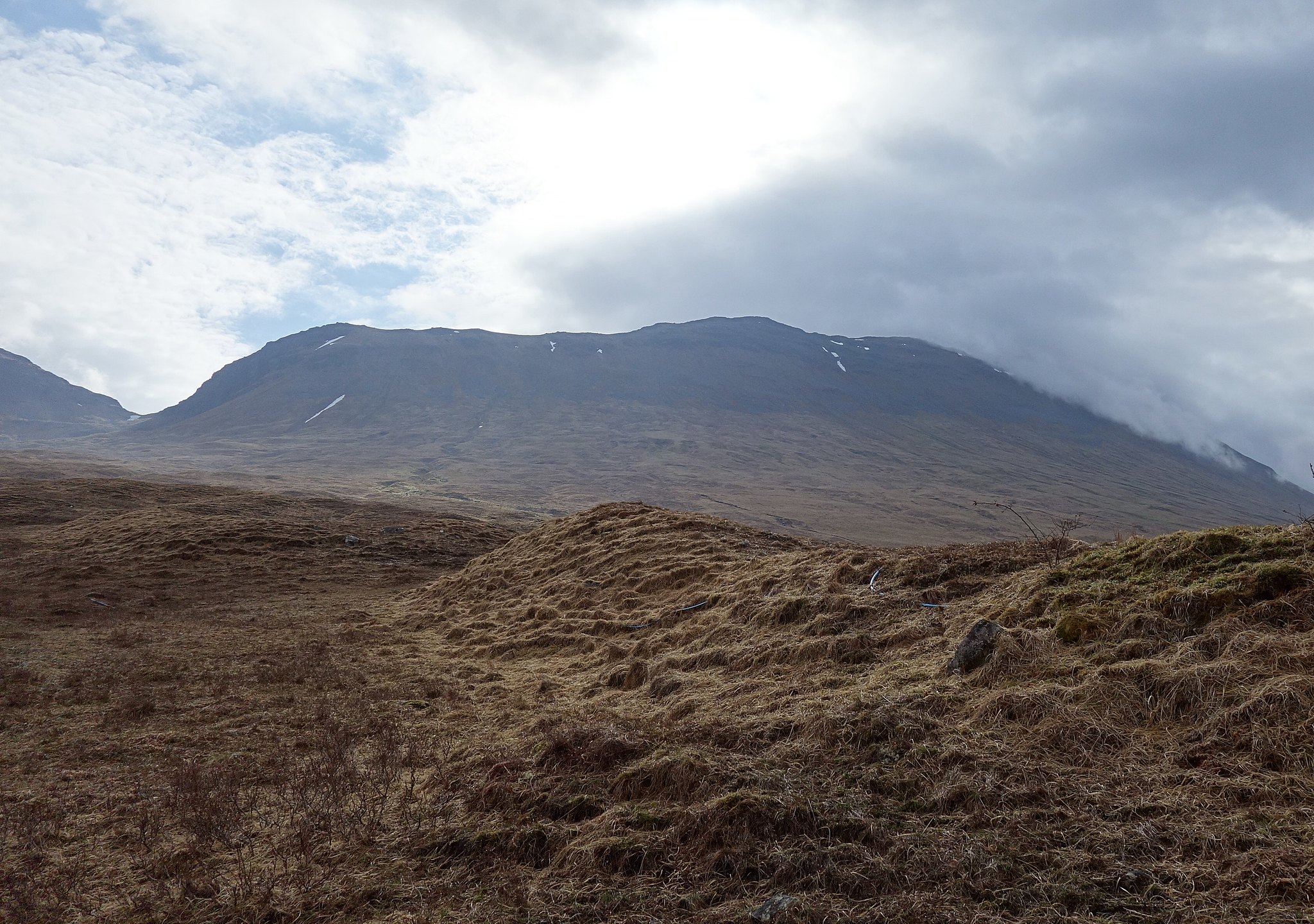 The views were getting better. 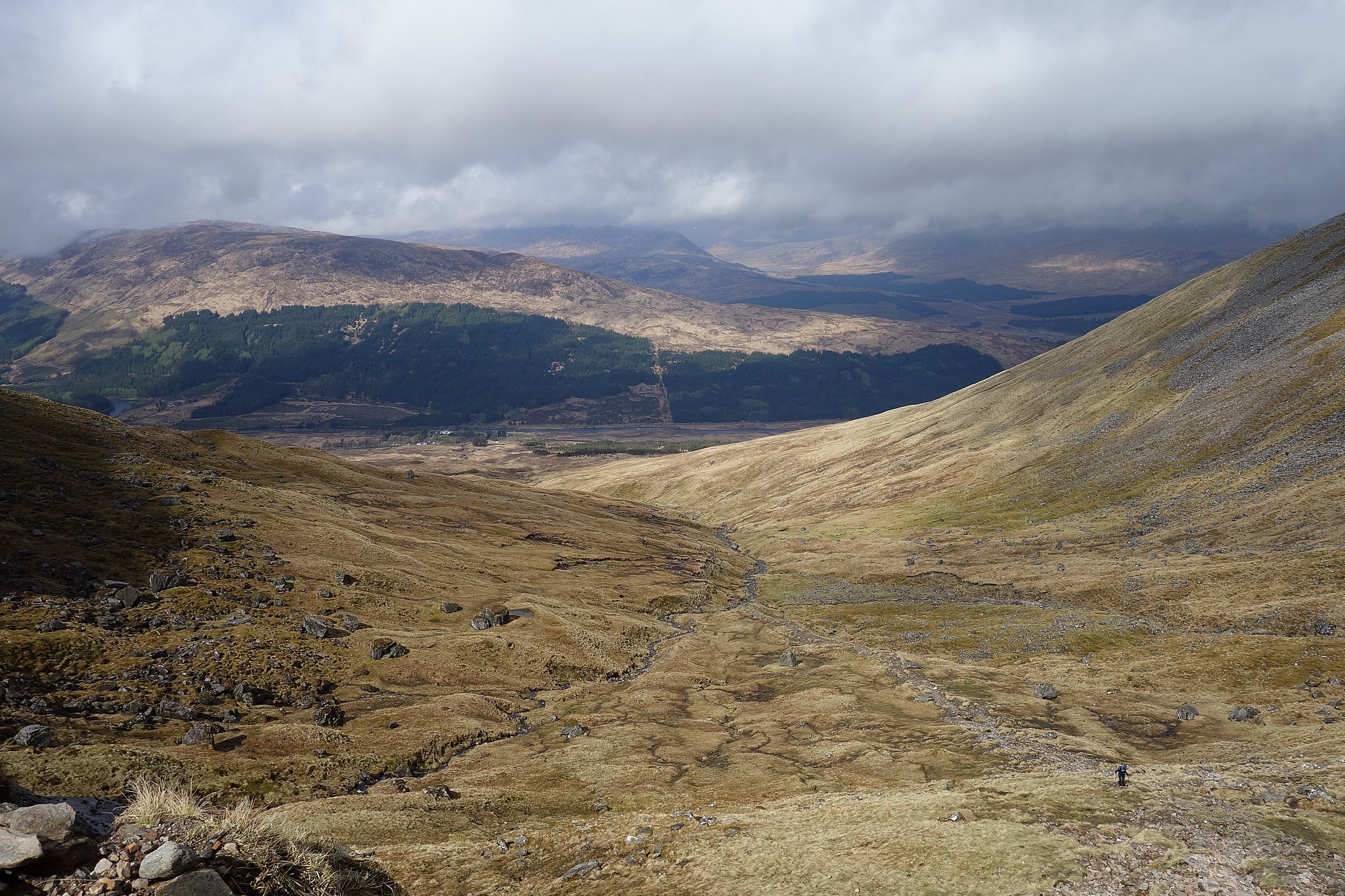 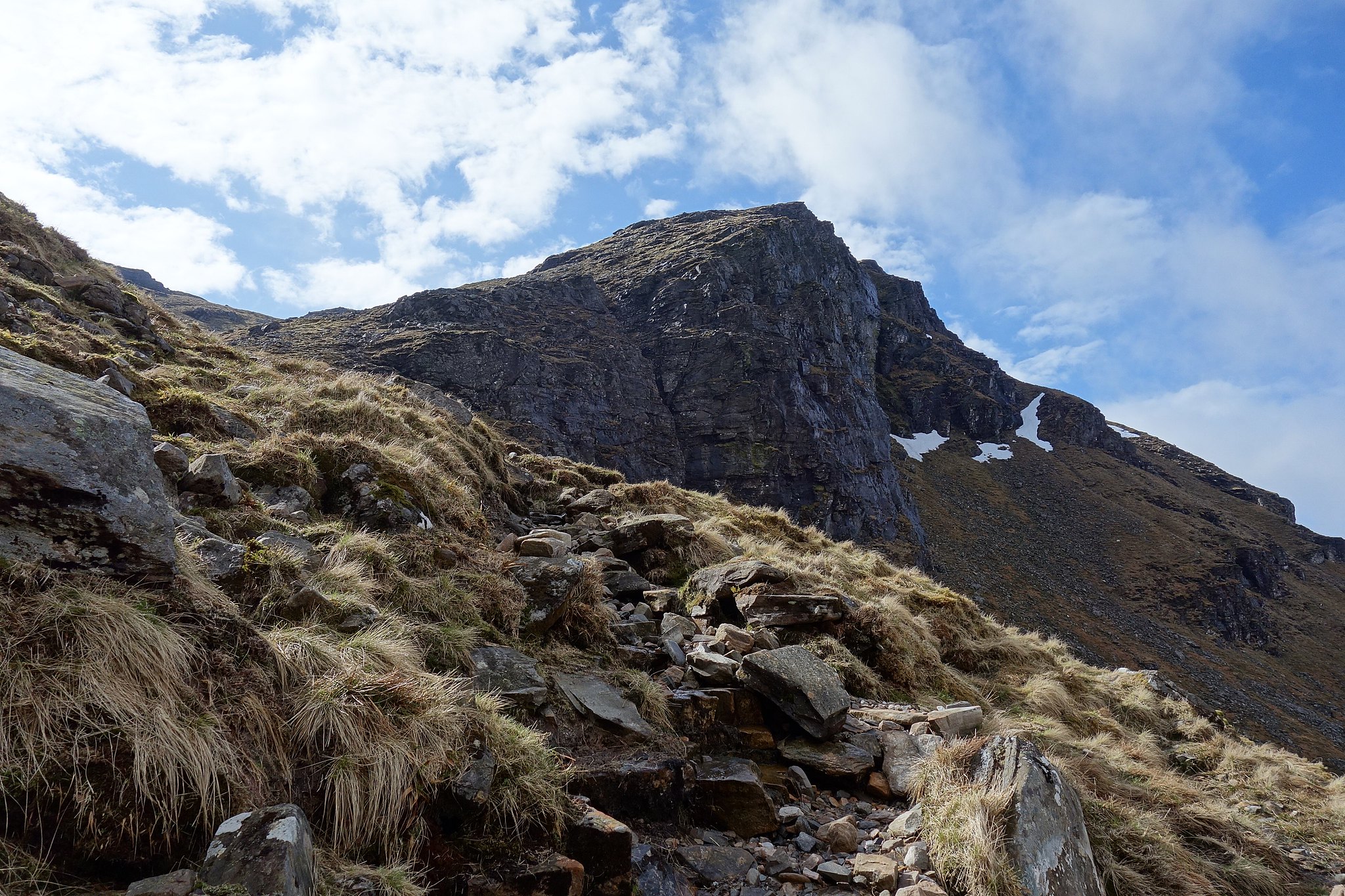 At the cairn in the bealach we had to make the decision, which one first

well, that was easy really, I wanted to do the one I hadn't first, that way we'd both get a new one, a bit selfish I guess

the other factor was Beinn an Dothaidh was clag free, Dorain wasn't. 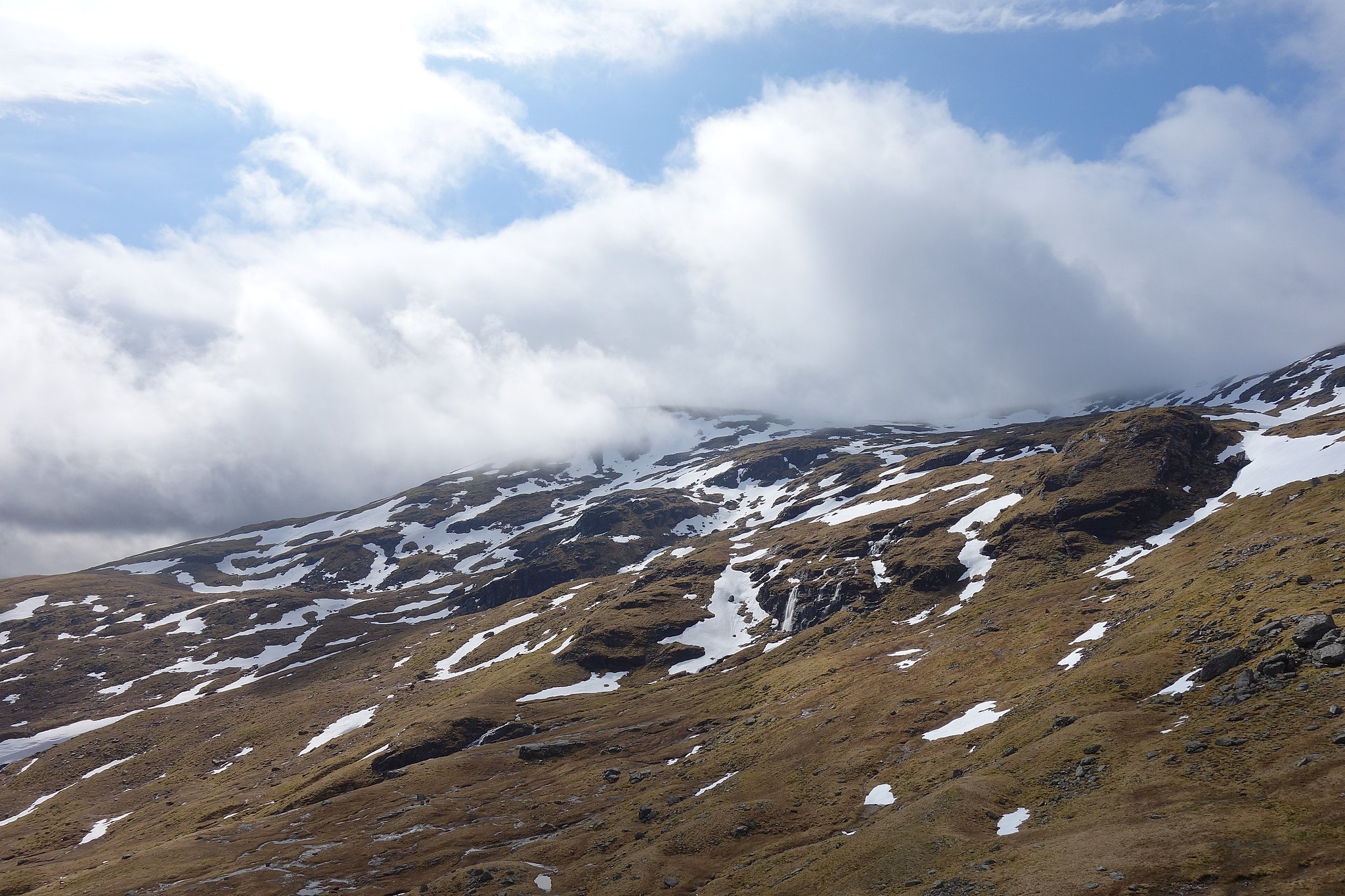 Way back in 1974 I remember Dorain was clag bound then and on the summit our teacher gave us a quick lesson in compass work to see who could take us in the direction of an unseen spot by choosing a feature on the map he told us to take a bearing to get us to Carn Sassunnaich, we all managed to satisfy him so he set off to put our work in motion got to the cairn and then told us to do the same again but this time back to the summit, he was a good teacher, he helped to build your confidence by praising your success

Back to 2018, after munchies we set off for Dothaidh, we followed the path 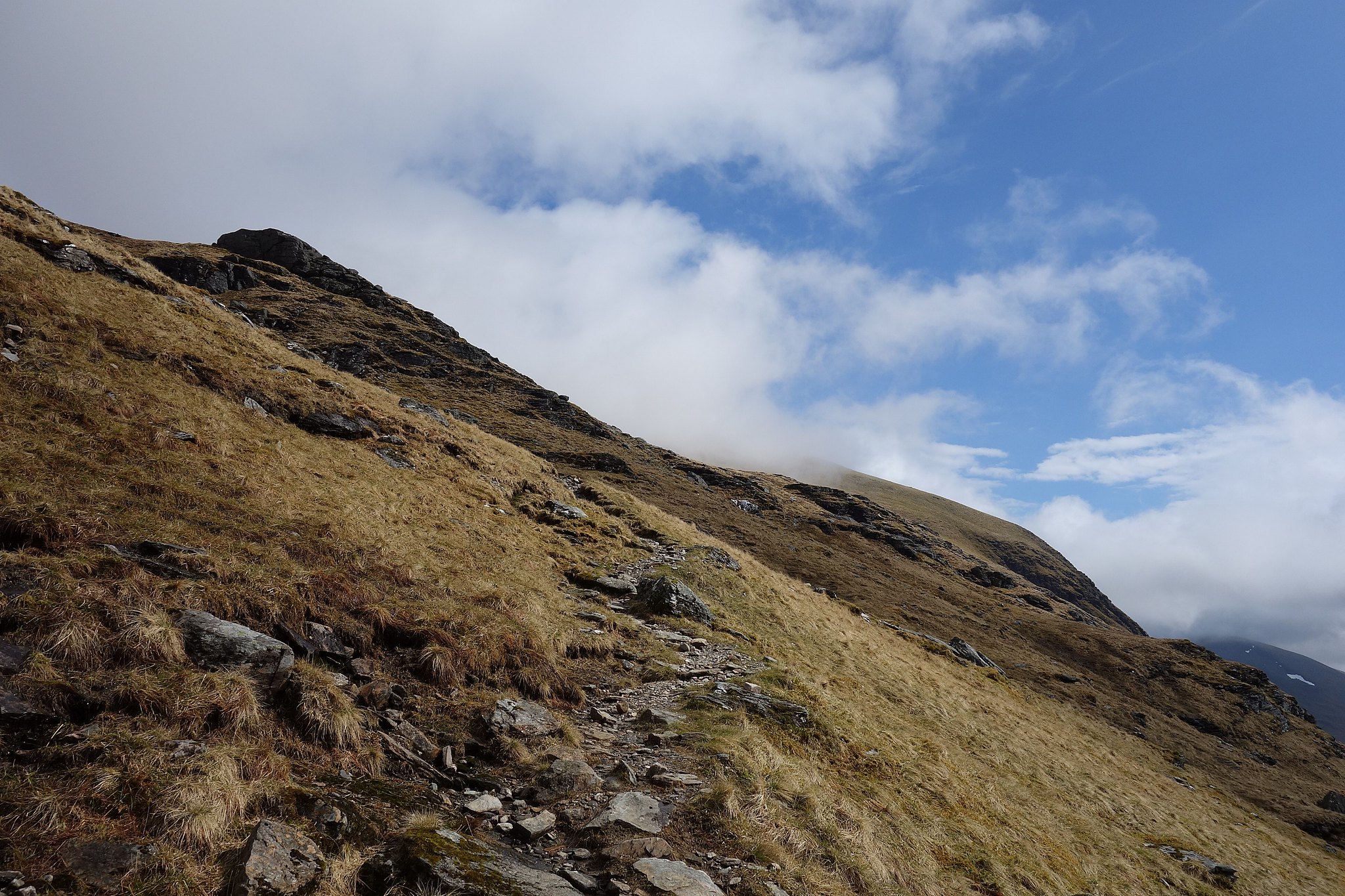 then lost the path, found the path, lost it again in a boggy stretch then just headed for a dip in the skyline between the summit and point 992

We arrived at the dip, went to point 992 first because it looked interesting then turned round to go to the summit which turned out to be further than it looks, or so it seemed. 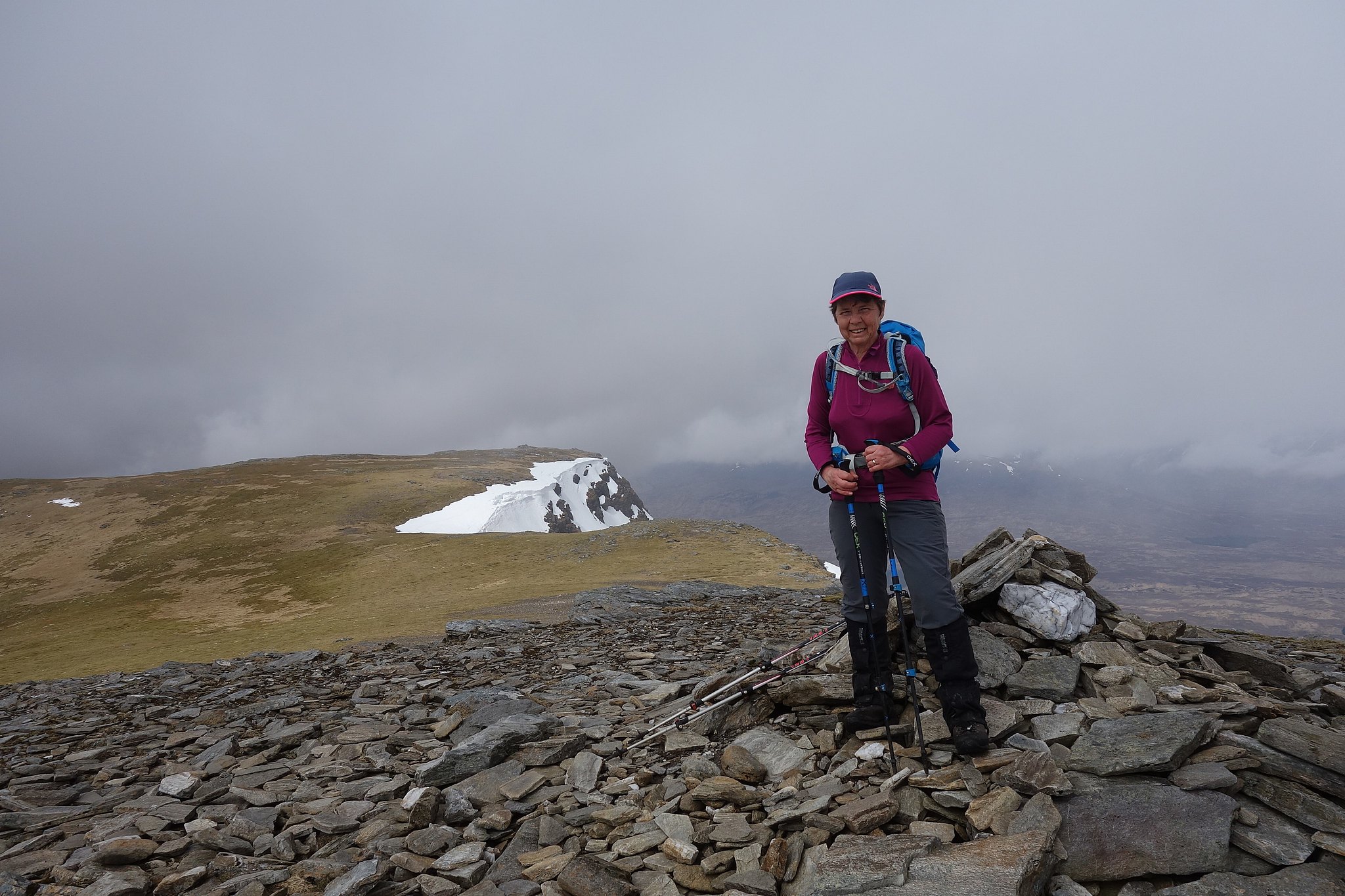 It was a bit cool and breezy on the top, there was a thin layer of cloud on and off but the views were good, Dorain was still clagbound so we'd made the right choice for a change, we had a snack took a few piccys then set off back to the bealach. 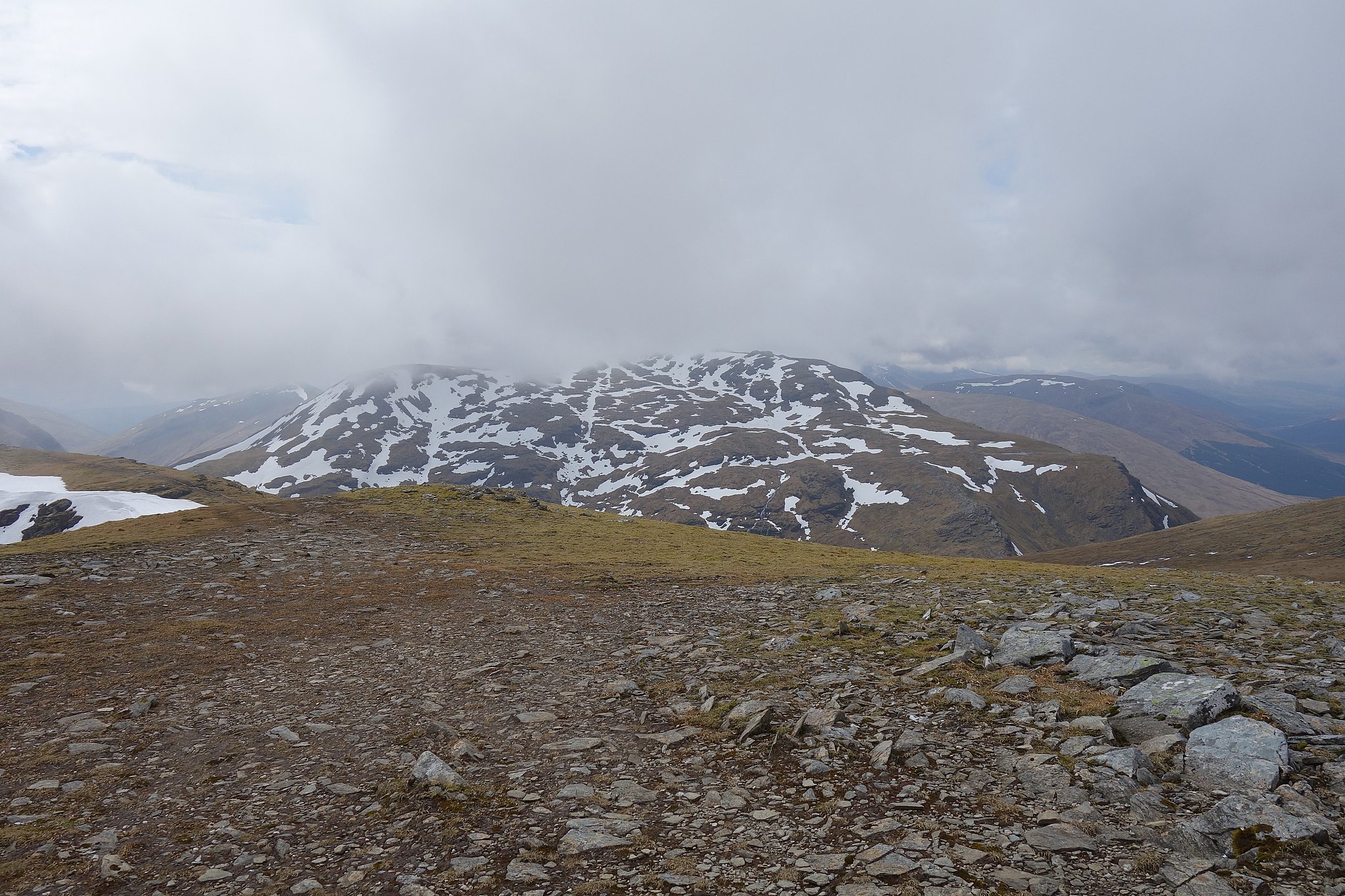 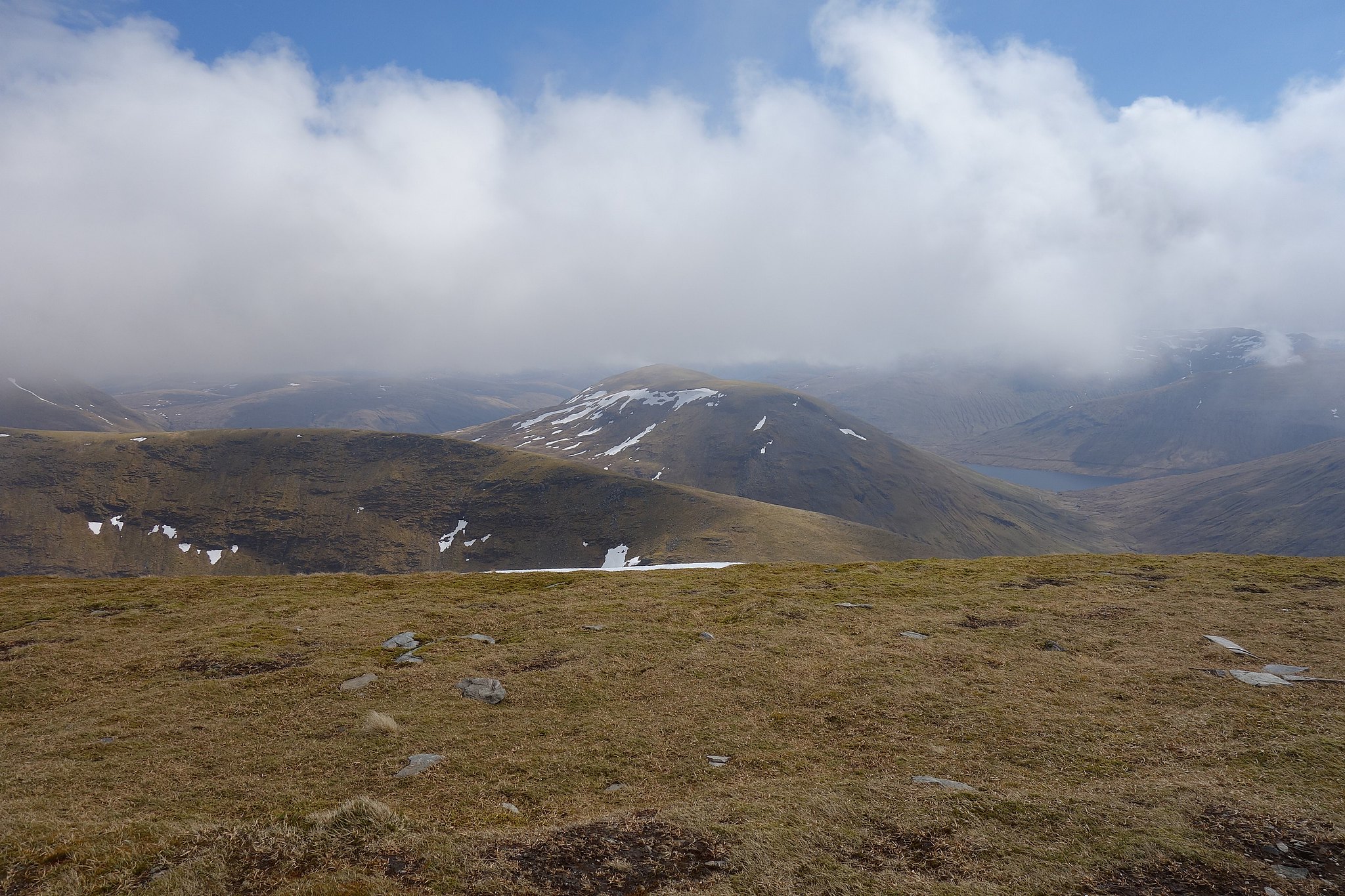 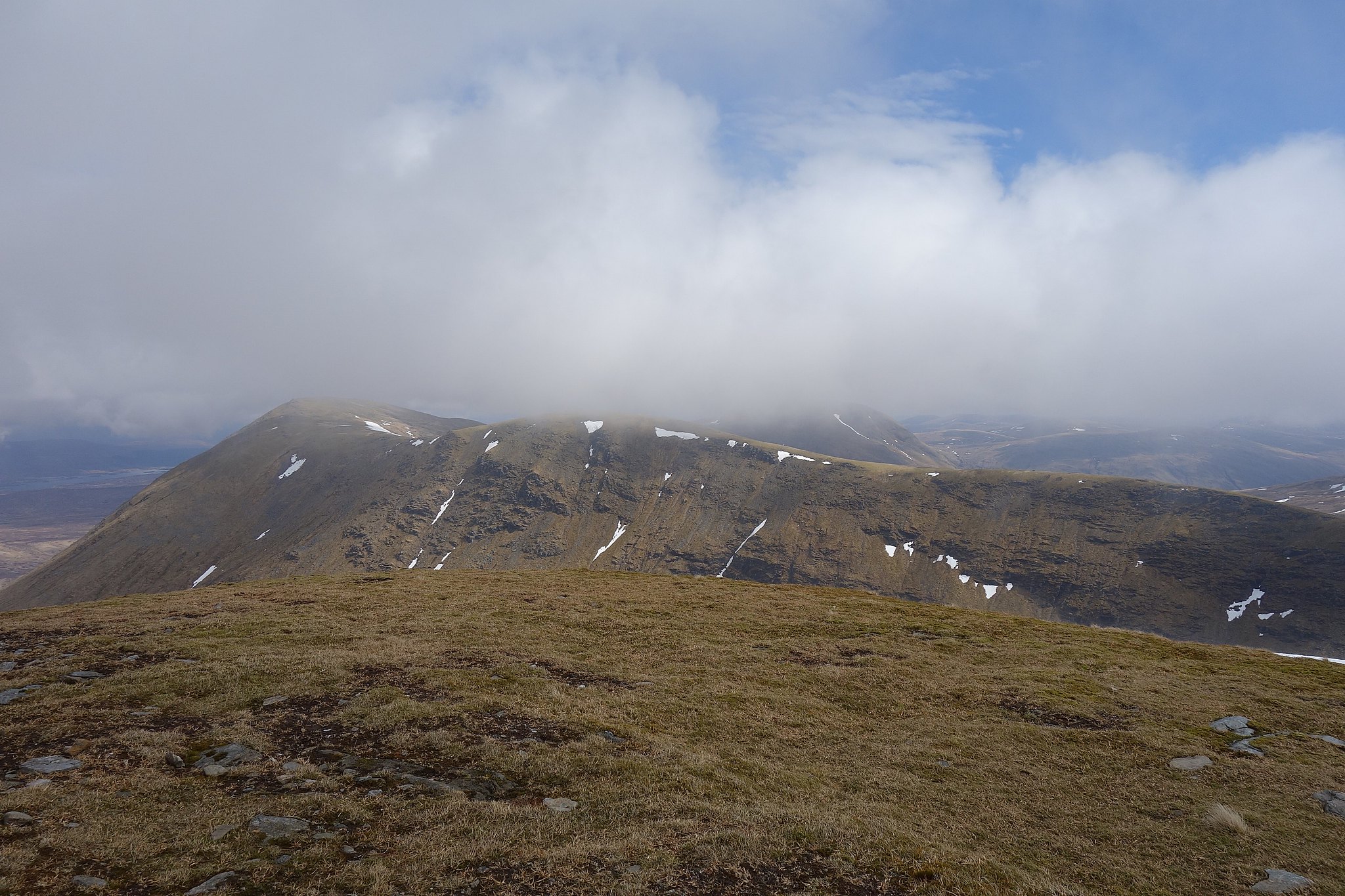 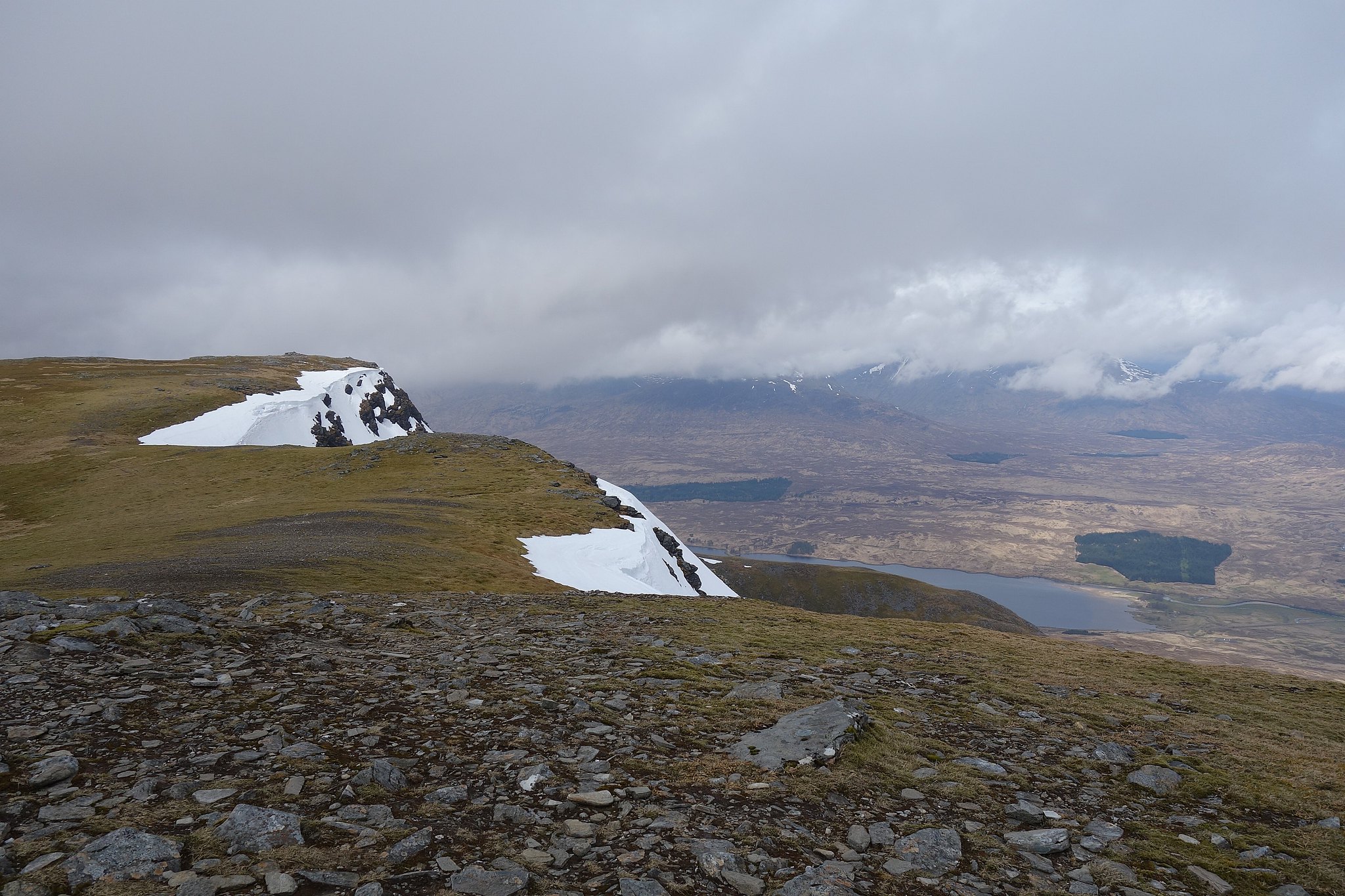 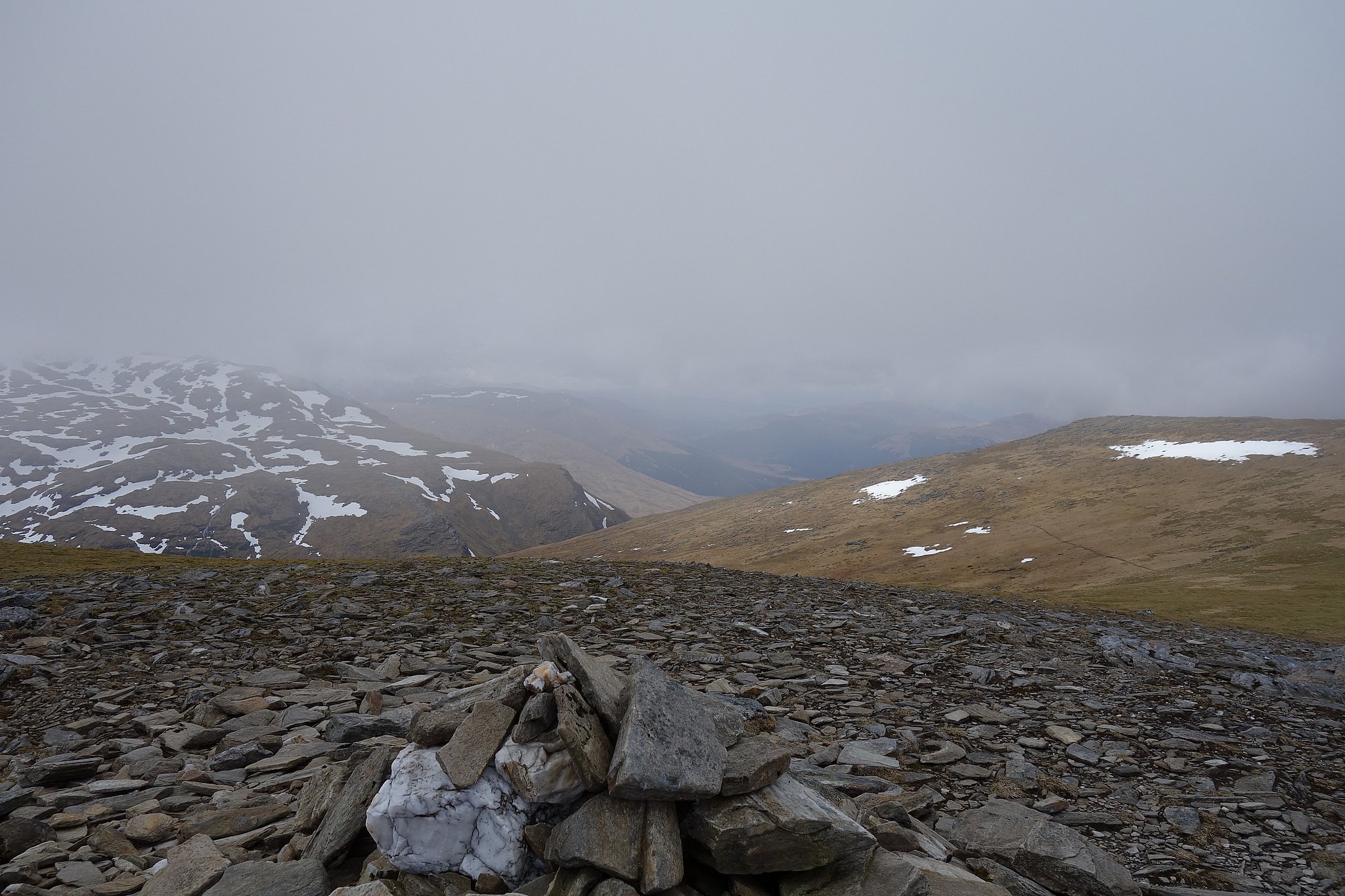 Arriving back at the bealach there were a few more folk about all heading for Dorain so we were going to have company for this one.

Looking at Beinn Dorain from the summit of Beinn an Dothaidh suggested it was going to be a bit of a long pull to the summit, maybe that was because we couldn't see the top, it just looked massive. We set off from the bealach, established a steady plod and just kept going

After the initial steep climb from the bealach it levels off to a much steadier ascent before steepening again to gain the ridge, for some reason we continued on the lower path thinking this might turn up to the ridge, it didn't so further on I decided we'd make a direct assault up the very steep hillside to get back to the path on the ridge, I should have paid more attention to the WH route description

When we arrived back on the path we'd gone past Carn Sassunnaich and arrived in the dip between that and the summit so we went to the summit first, by this time all cloud was well above the summits so the views were well worth the effort, I could see what I'd missed on my very first munro glad that that day in May 1974 didn't put me off the mountains for good 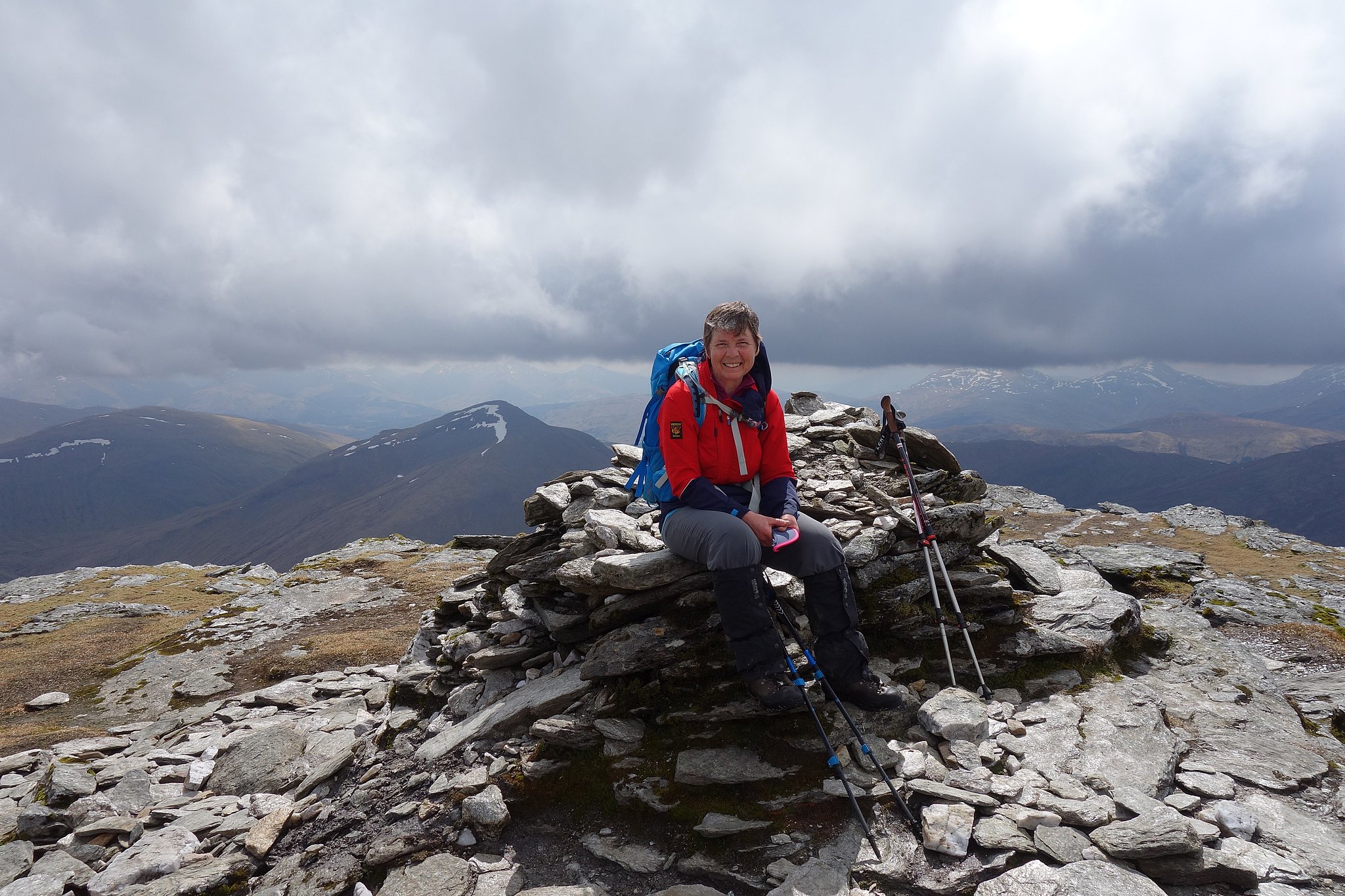 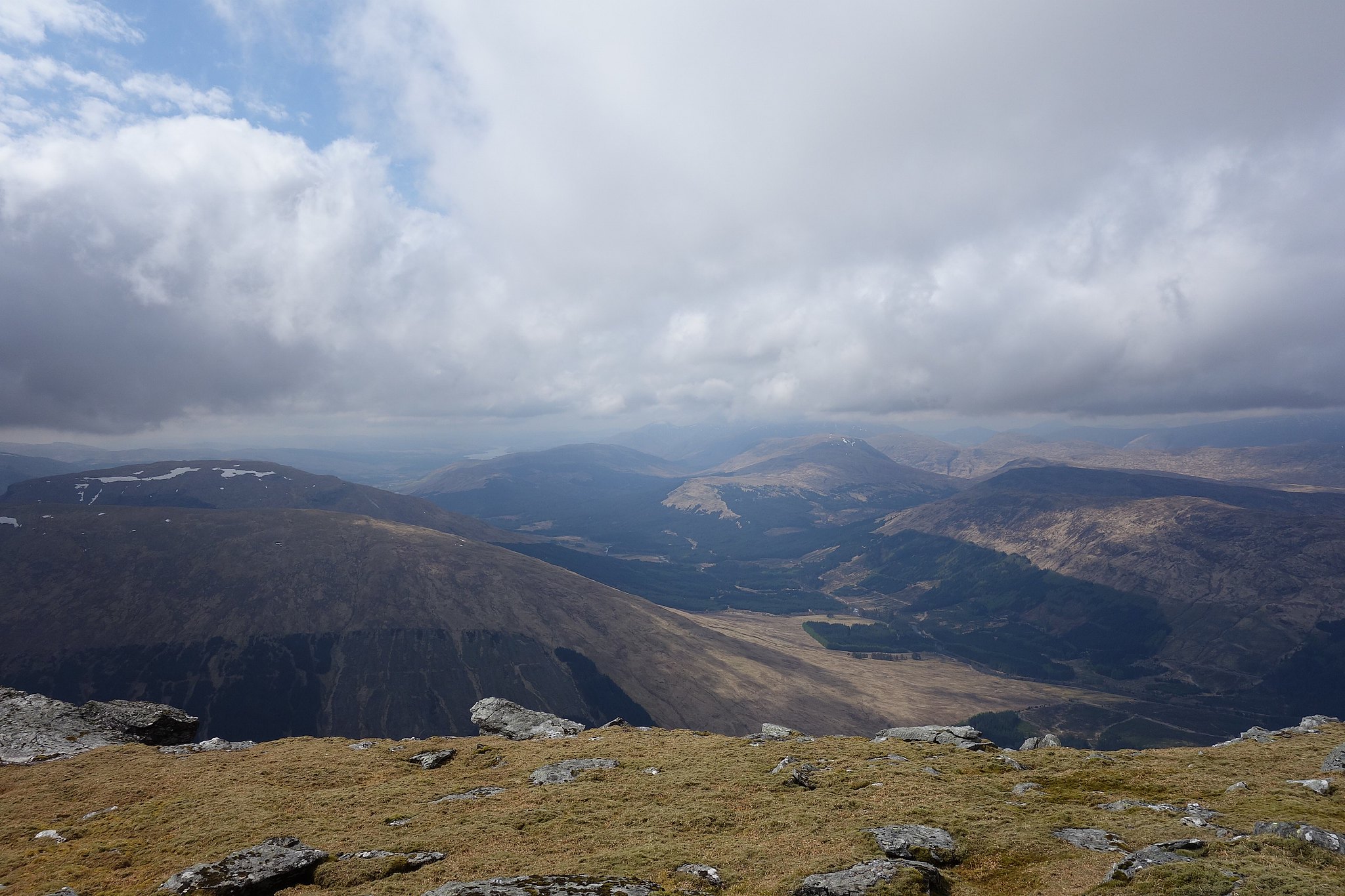 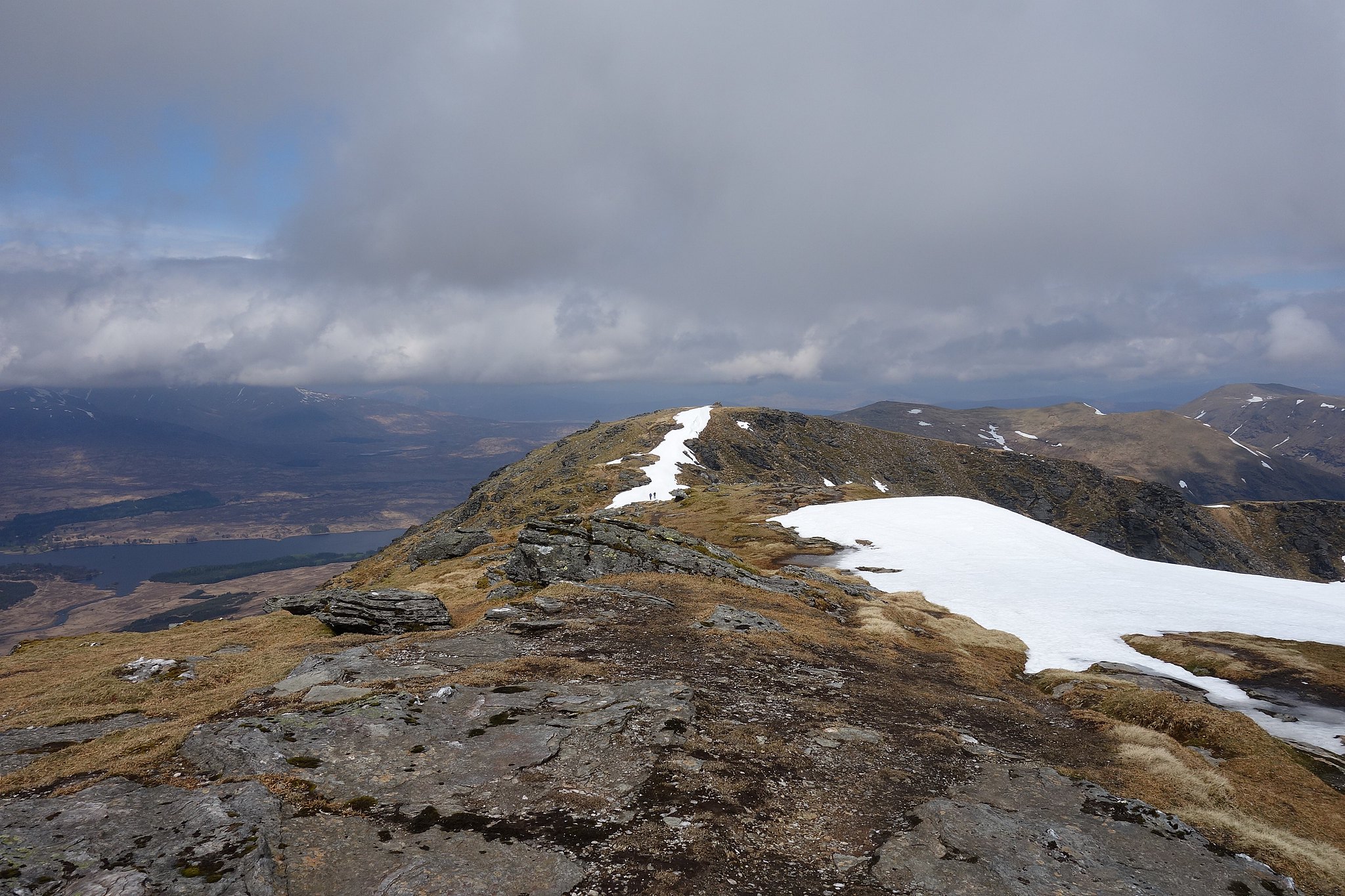 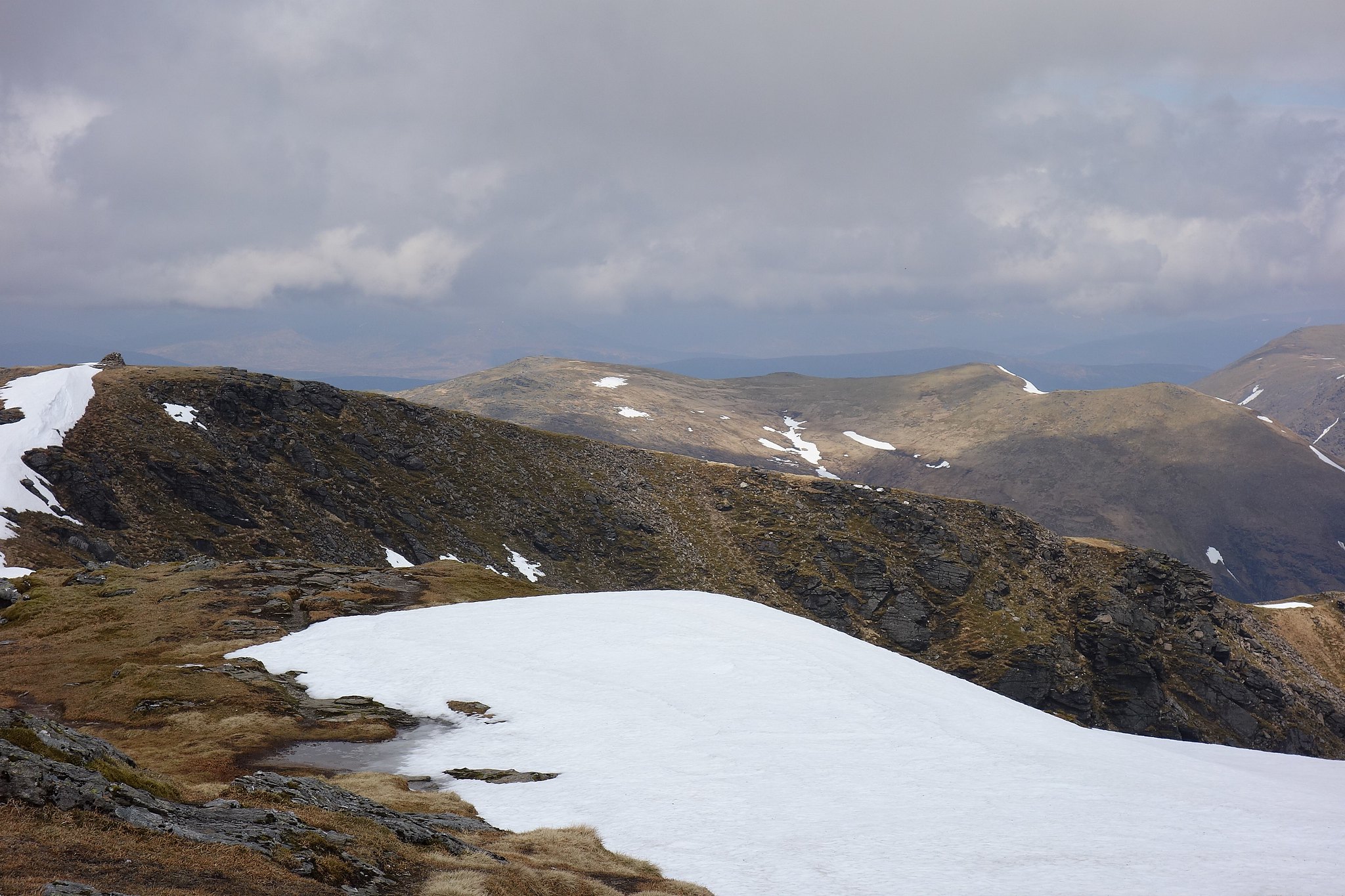 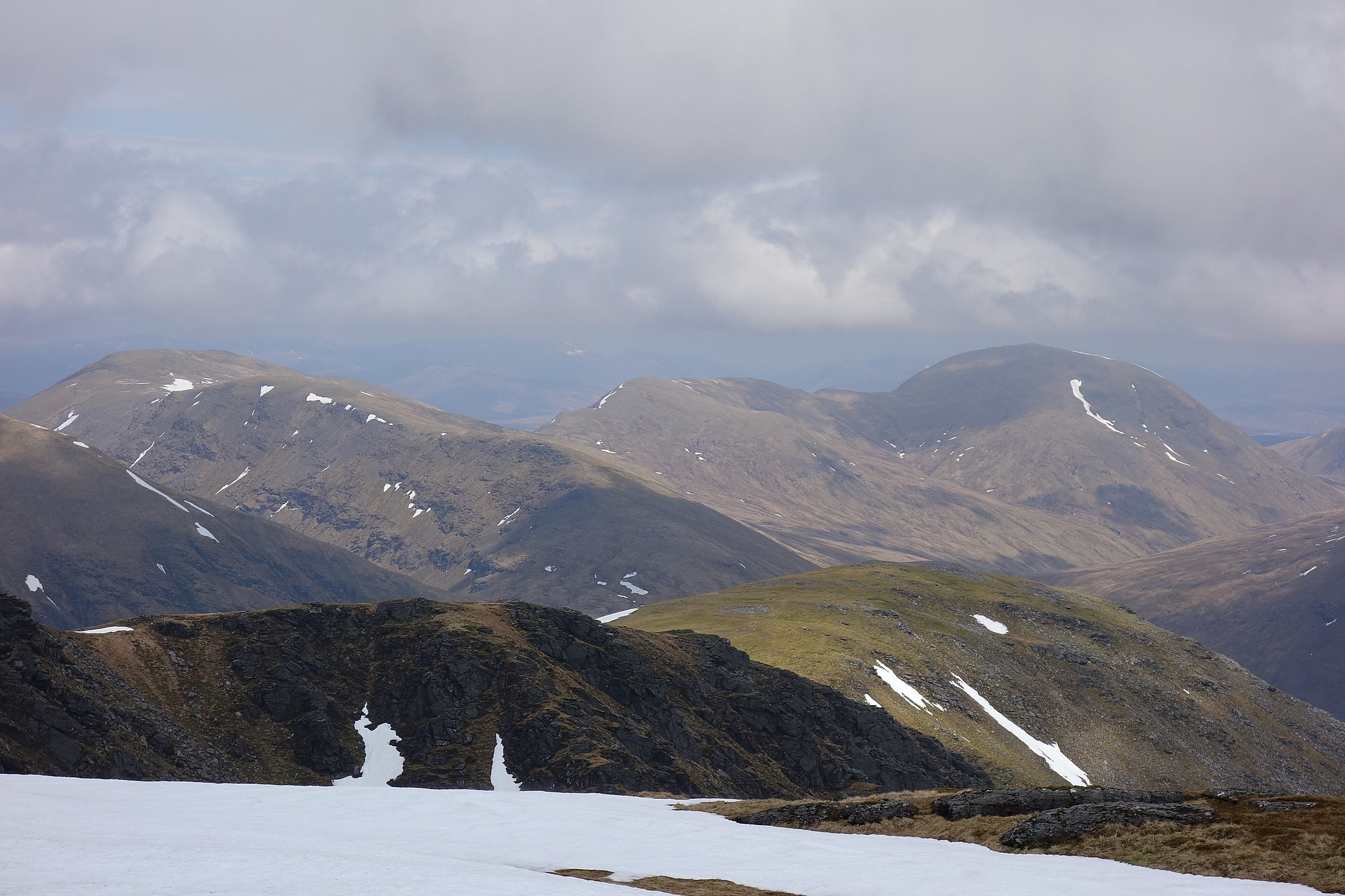 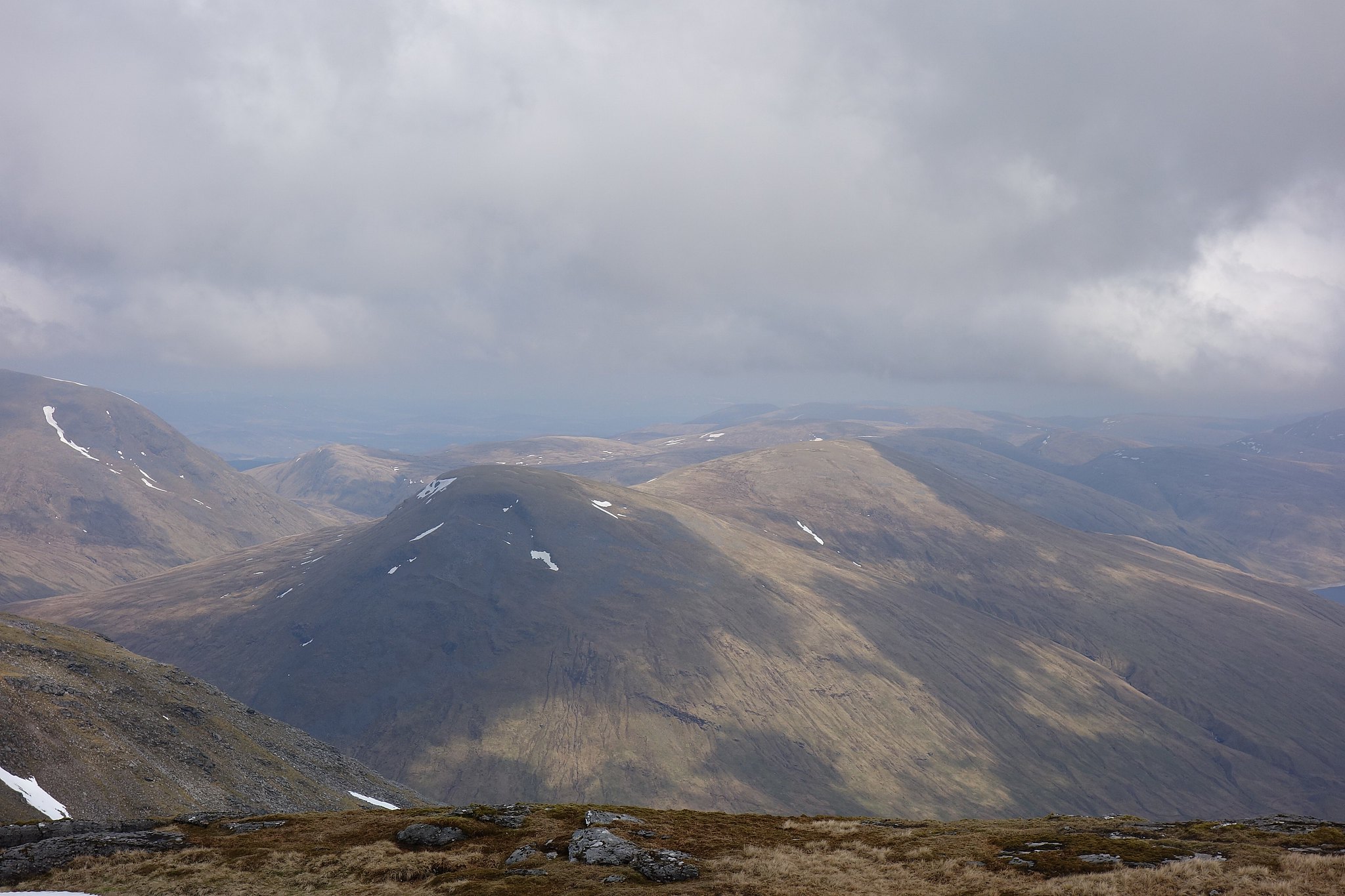 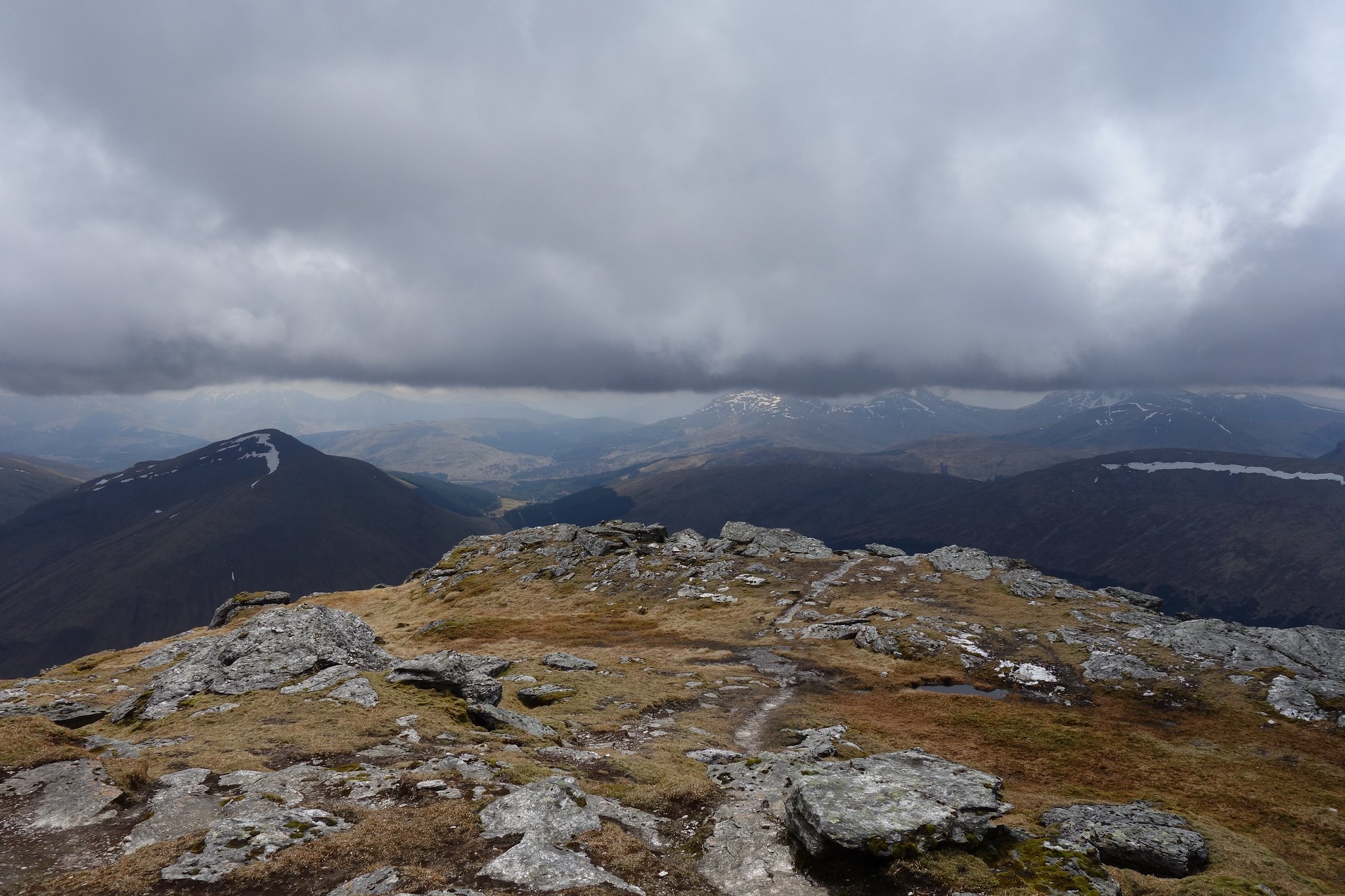 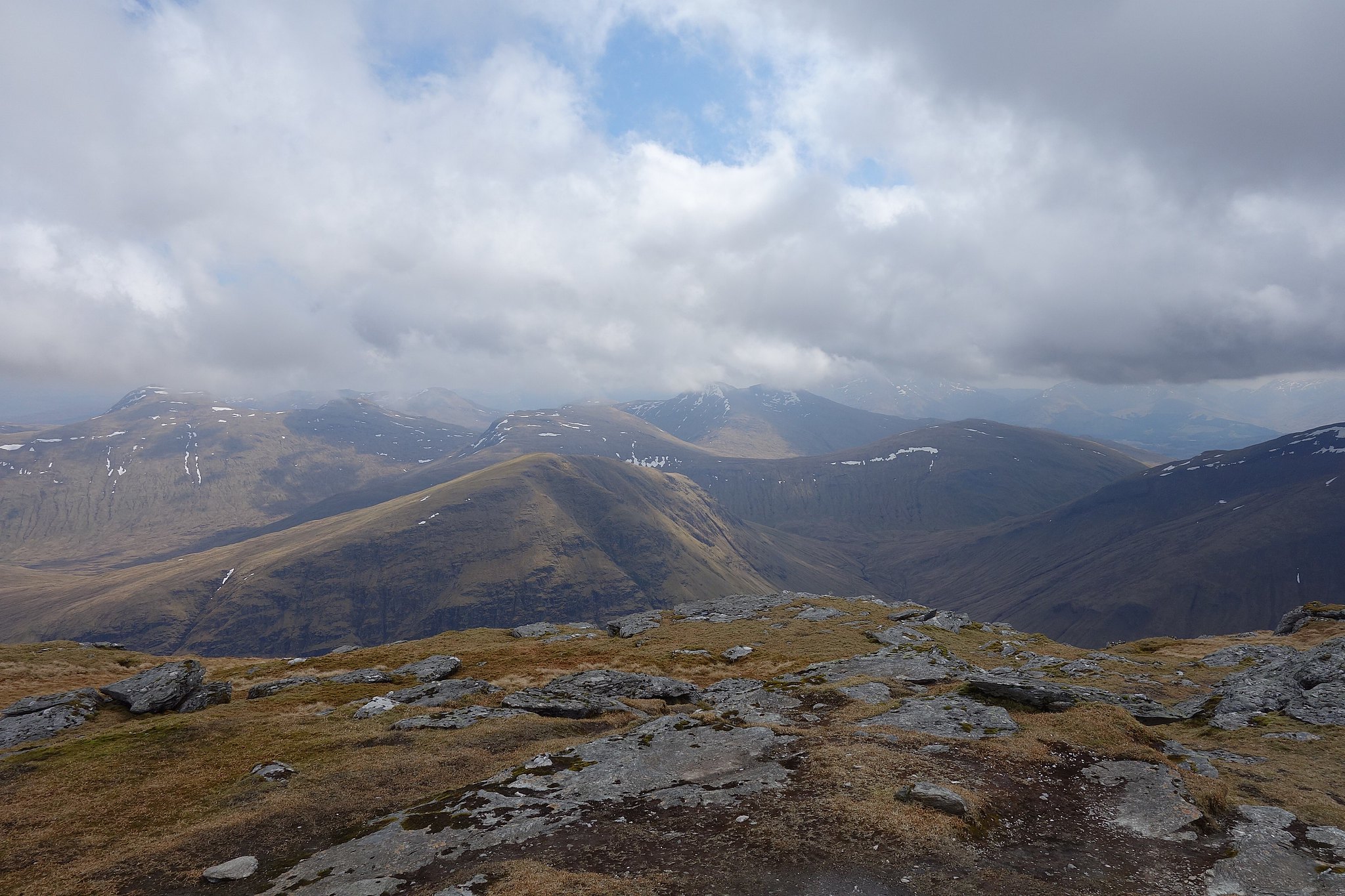 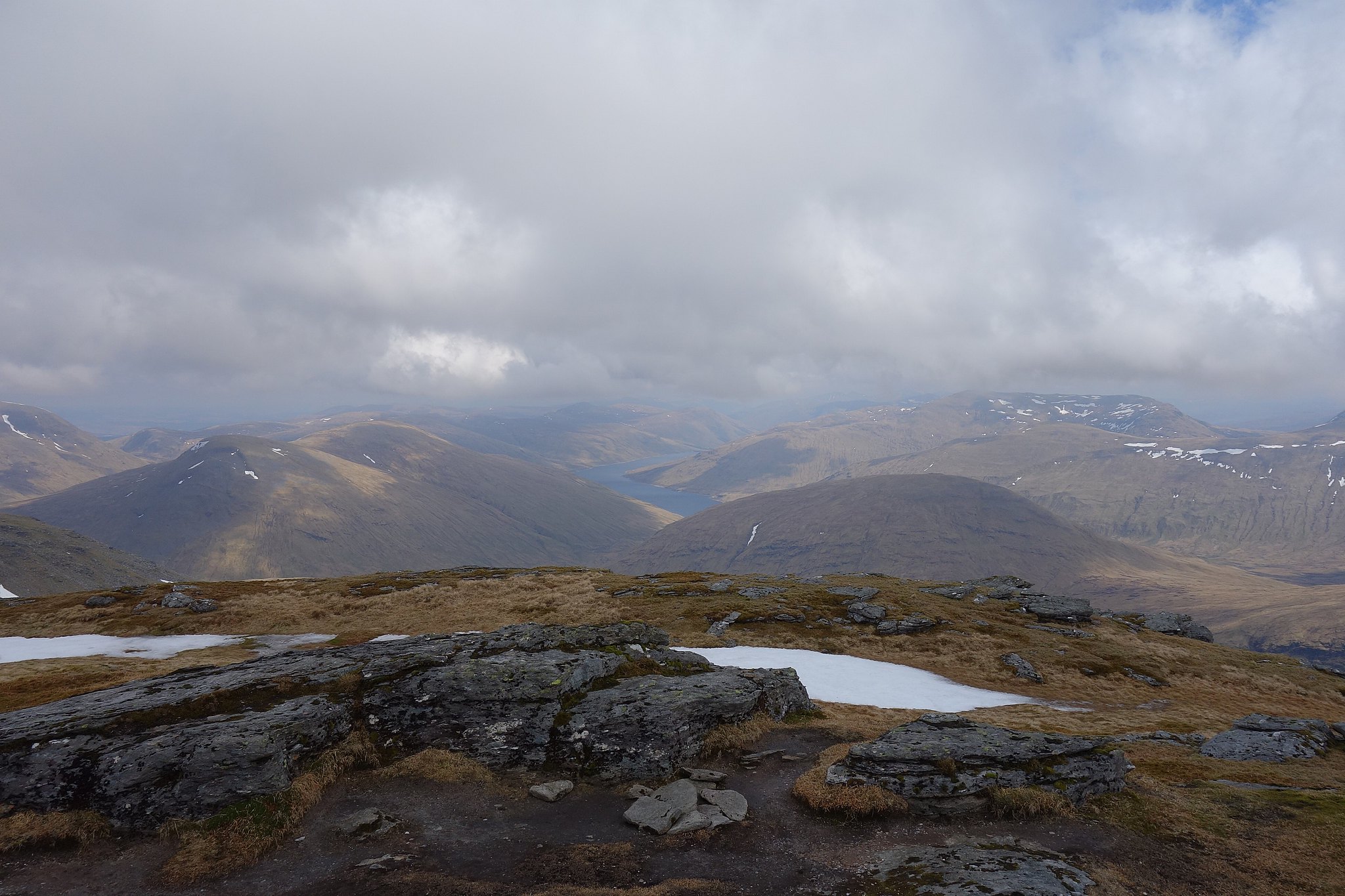 We had a bit of lunch on the summit, looking at the views then set off for Carn Sassunnaich, there was a bit of snow around which added highlights to the mountainsides.

Back at the cairn in the bealach we stopped for a longer break, by now the sun was shining, it felt warm and pleasant just sitting there knowing we had plenty of time, after a while we set off to get back down to the Bridge of Orchy. 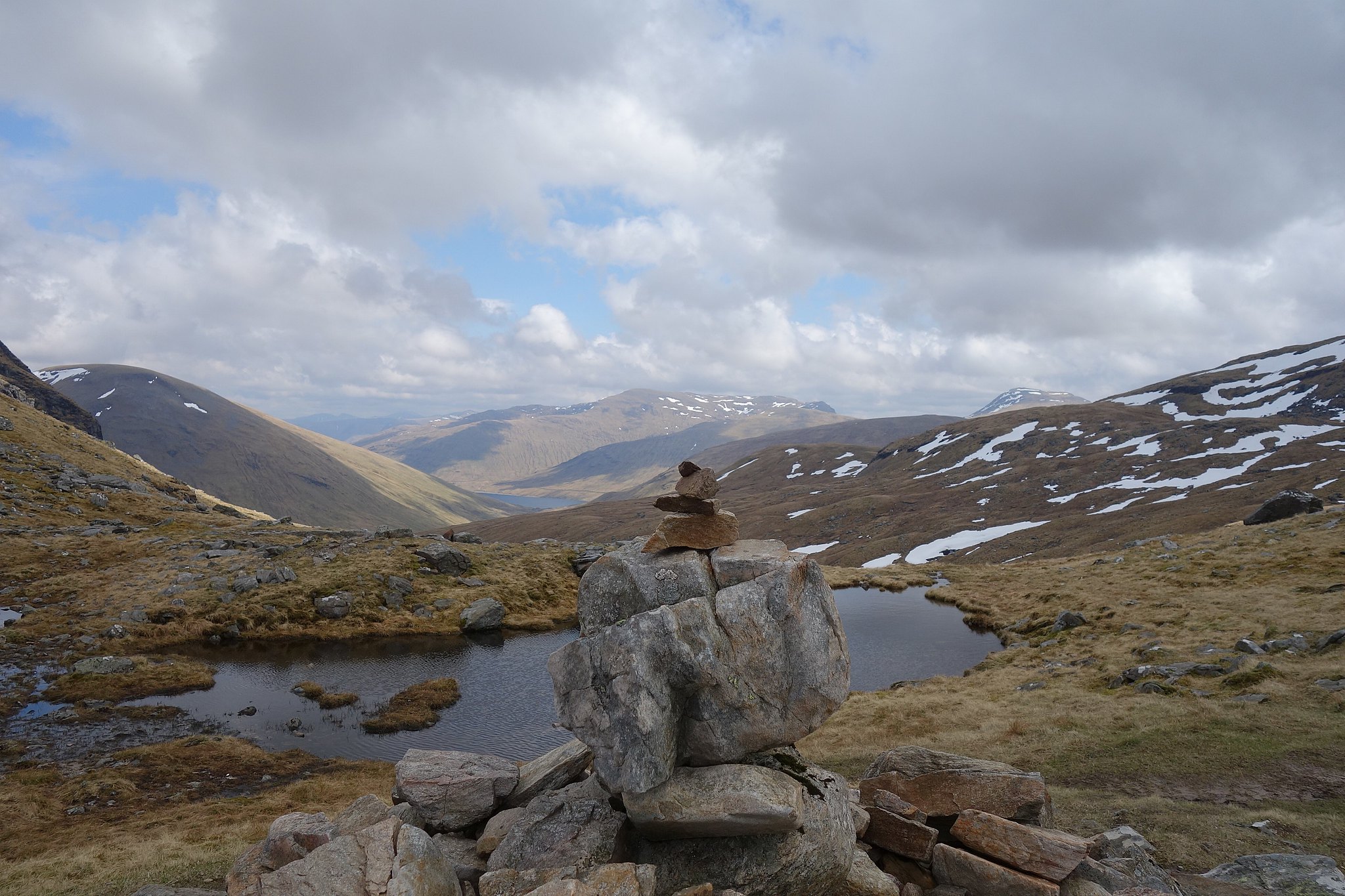 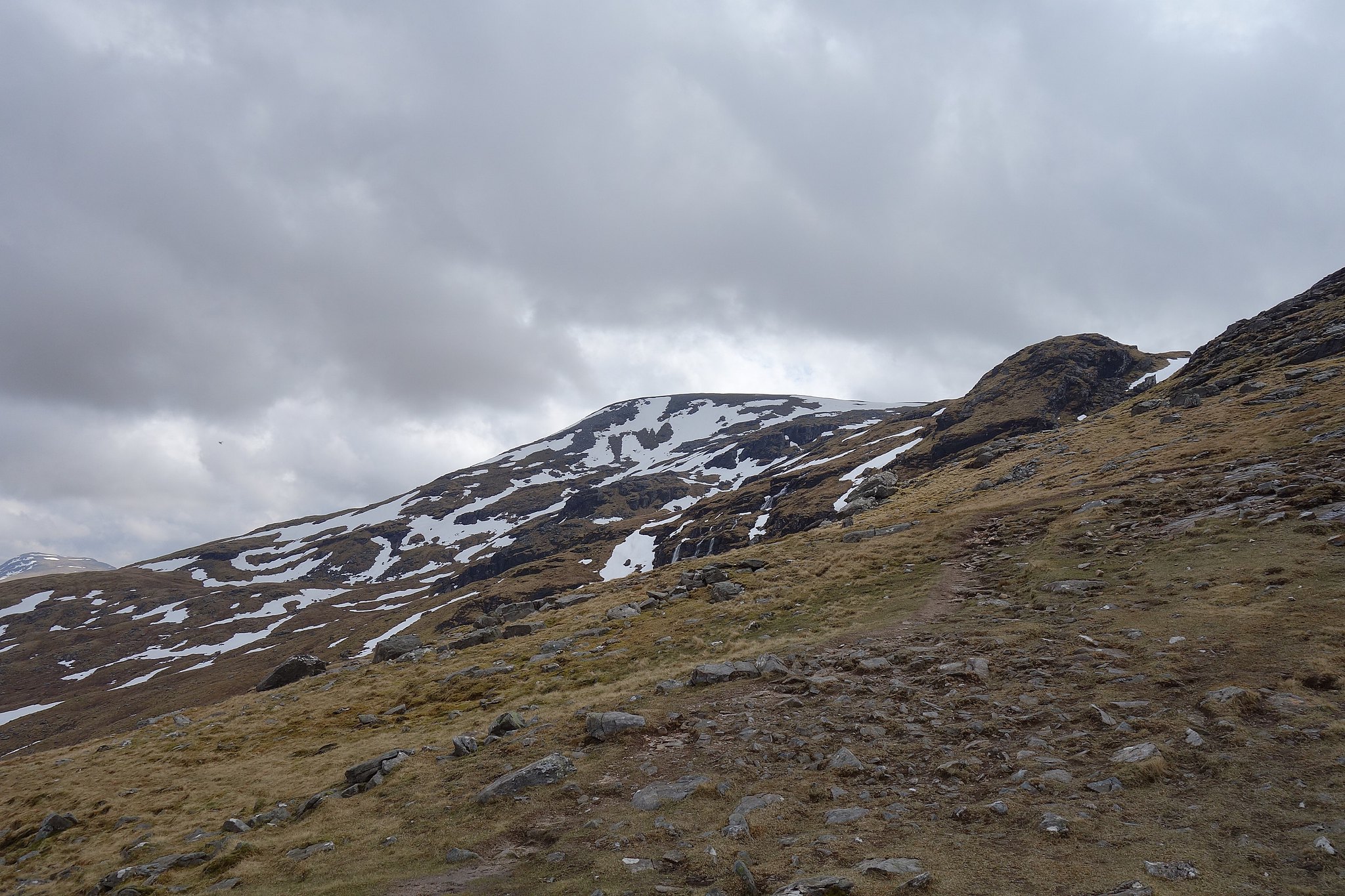 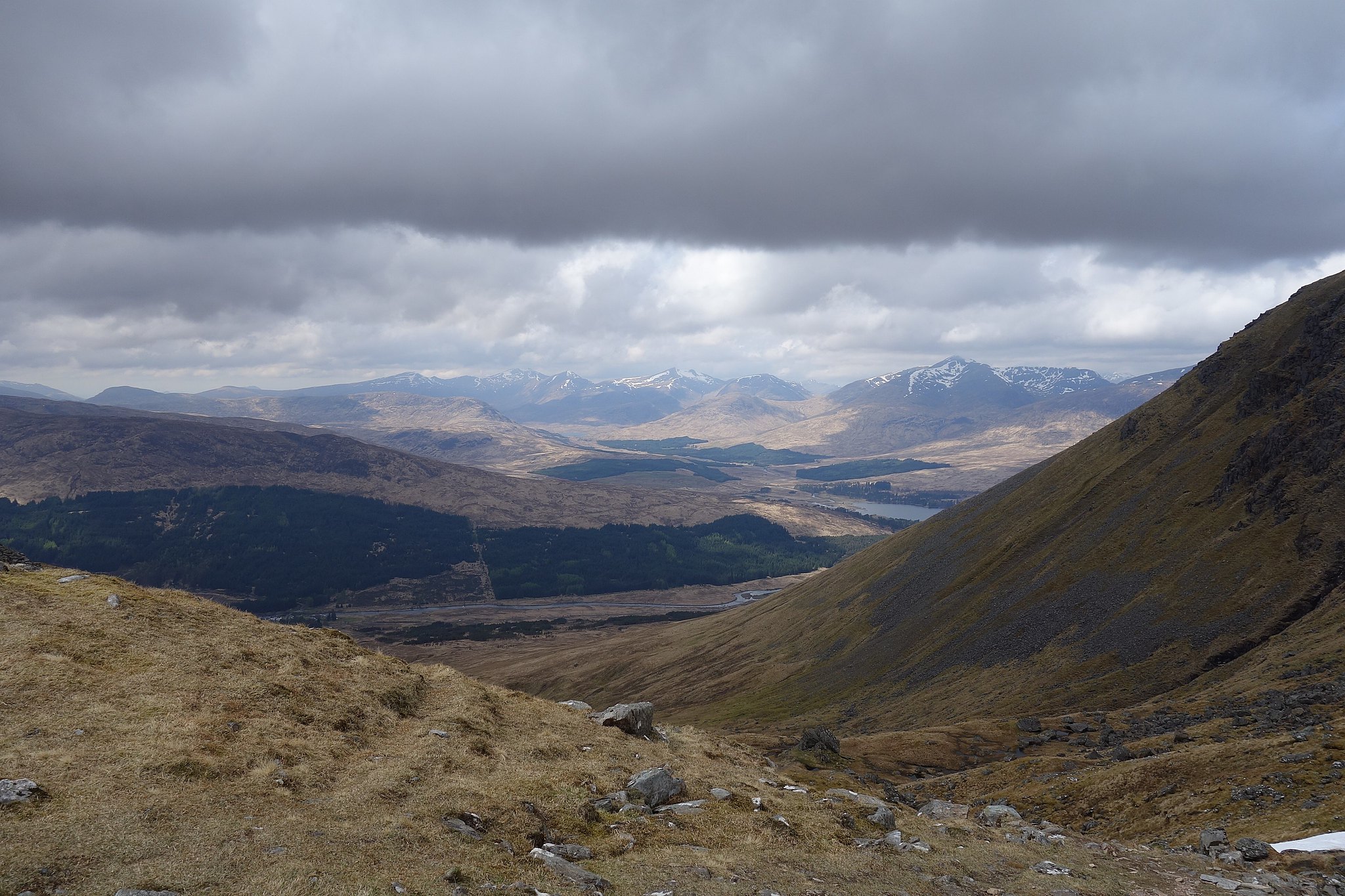 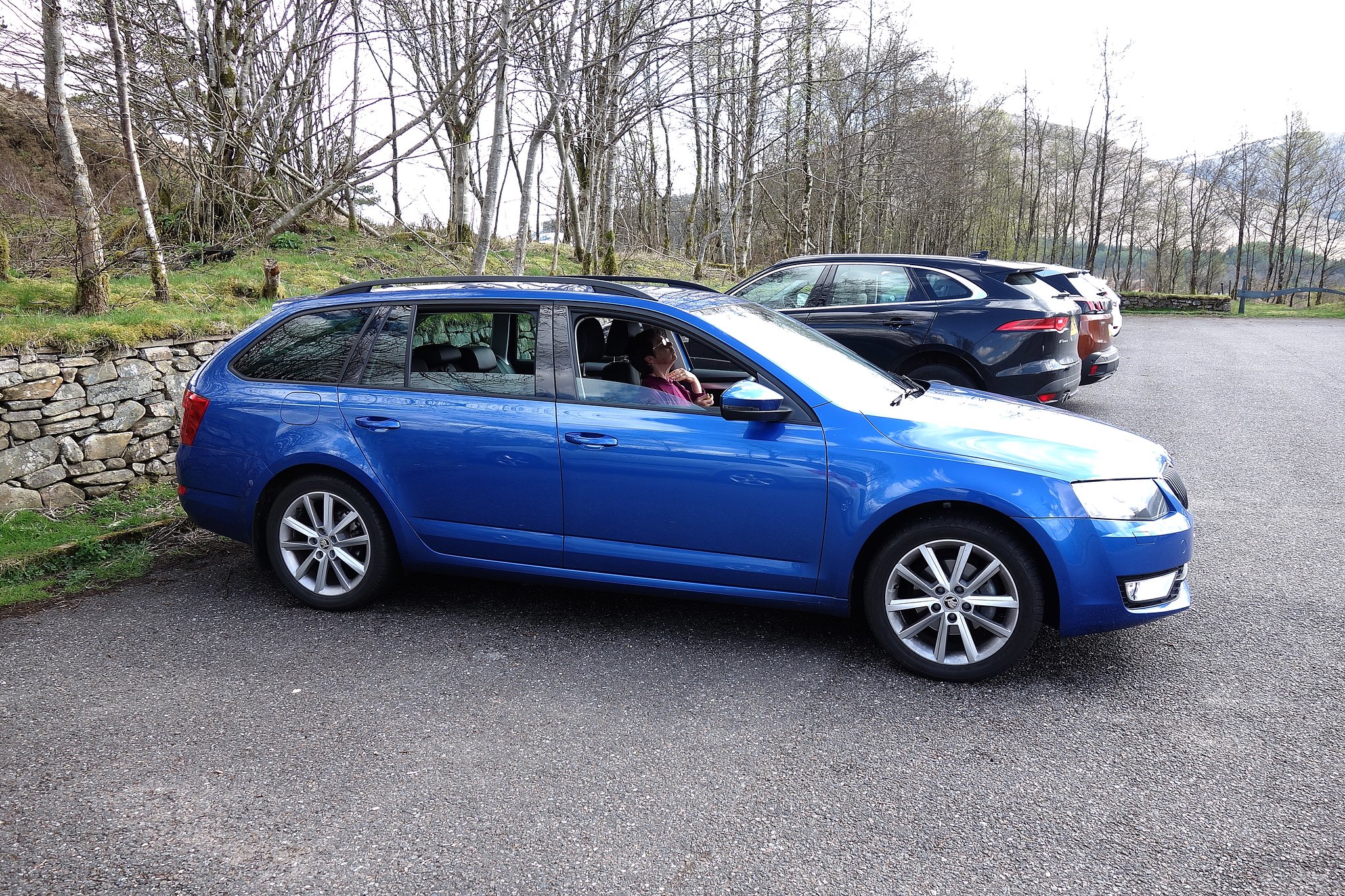 We really enjoyed these two mountains, now we can both say we've been to the top of that massive cone of a mountain you see on your way north from Tyndrum, when we come this way again later this month I can say to Denise WE'VE been up there instead of just "I've".