Almonds are a girl's best friends :)

Almonds are a girl's best friends :)


For some time I've been scratching my head, to invent an interesting route for Auchnafree Hill. The most popular approach is from Loch Turret and the Corbett can then be combined with Ben Chonzie. But we had already done Chonzie from Loch Tay. I had a look at other peaks that could be added to Auchnafree Hill traverse and found Beinn na Gainimh across Glen Almond. This modest Graham is only a half day hill by itself and would be a good winter walk for those living nearby. For us, it's 2 hours drive so combining the two seemed the best option.

Sunday the 29th, weather mixed: some cloud, some wind, chance of passing showers, chance of sunny spells. Not a day for multi-Munro traverse, but good enough to scamper up and down a Graham and a Corbett

The route we plotted starts from Newton Bridge and follows Glen Almond. Both hills can be easily climbed from this glen and both have good estate tracks on ascent and descent. Some pathless terrain near summits, a few pet hags but generally very easy going. No problems with river crossing as there are bridges everywhere

Track_AUCHNAFREE 29-04-18.gpx Open full screen  NB: Walkhighlands is not responsible for the accuracy of gpx files in users posts
Cars can be left in one of 2 large laybys near Newton Bridge: I have never been to Glen Almond before and I didn't realize how nice this corner of Scotland really is. Especially in spring. The bottom of the glen is very green and mostly used as pasture, so we encountered hundreds of ewes with cute newborn lambs. At the moment, some grey cloud still covered the tops of surrounding hills, but forecast was reasonable so we hoped this would clear later in the day.
Ready for another adventure: I'm not an expert on sheep breed but this beast looked very intimidating! The climb up Beinn na Gainimh begins by locating an obvious track up Conichan Castle (655m top). It's so obvious even a blind mouse would find it The track makes for quick going and it climbs up to the height of 550m: As we marched up, we met more sheep and lambs as well as mountain hares: Conichan Castle to the left hand side, looked pretty steep so we stayed on the track for as long as we could:

Looking across Glen Almond to the eastern slopes of Auchnafree Hill (Sron a'Chaorainn): We left the track at its highest point, to climb to Conichan Castle (nice name for a top by the way

). We located a faint path that winds its way through heather and scattered rock. It starts here: After a short, steep climb, we reached the top, which is an excellent viewpoint down to Glen Almond. Weather was slowly improving and on the summit of Conichan Castle, we basked in sunshine. The top is marked with an unusual "standing stone": A faint path continues along the heathery ridge to Sron Bealaidh, the western top:

It's worth sticking to the path for as long as it exists, as it helps to avoid peat hags. On the saddle between the two tops the path disappears and we had to make our way across a few peat-haggy surprises:

...but after some hopping and jumping, we reached the summit of Beinn na Gainimh, which is marked with a small cairn. Graham no. 95 for us, 62 for wee Lucy! The best views from this summit are to the east and north, towards the distant Grampians... The distinctive mountain to the right must be Beinn a'Ghlo: The track up Auchnafree Hill, which was our intended route up the Corbett, can be seen from here:

If doing Beinn na Gainimh only, it's possible to concoct some kind of circular over the southern tops, around Corry Henzie, but we had a second target in mind, so we decided to descend to Glen Almond near Auchnafree Farm, using a track marked on 1-25k map. Sometimes things marked on maps are no longer there, but this track still exists, very grassy higher up, stony on lower slopes. We crossed one melting snow patch and walked past a line of grouse butts. Views down to Glen Almond were splendid:

The track took us back to the main road in Glen Almond. We met more sheep and crossed the river on a bridge: We aimed for Larichfraskhan Farm, where there was another bridge marked on the map: The second bridge gives access to the farm and an estate track climbing up Auchnafree Hill. Very rarely we have the comfort of walking up beaten track all the way to the summit!
Past the farm, we began our second ascent of the day. It's almost 500m in one push but the track makes it much easier to gain height quickly. Weather was much nicer now, sunny, and the clag lifted far above the mountain tops.
Panorama of Glen Almond from the lower slopes of Auchnafree Hill:

2018-04-29 auchnafree 122 by Ewa Dalziel, on Flickr
...and from a bit higher. The zig-zagging track we descended from Beinn na Gainimh can be seen in the middle of the photo:

BP marching up one more Corbett in her mountain career... 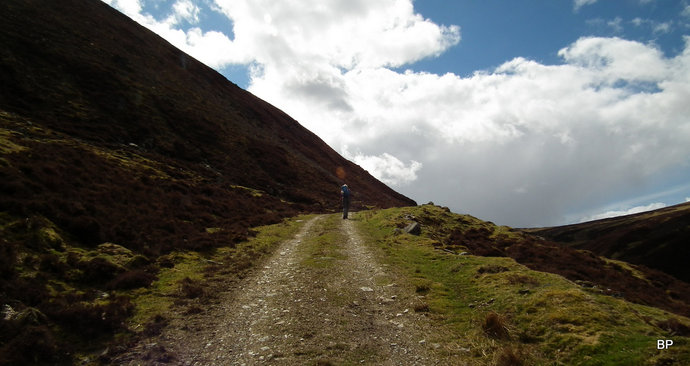 After maybe 300m of steeper ascent, the angle eases off and the final walk to the summit is a pleasant stroll with good views around. To the north, we noticed the tops of Loch Tay Munros, now with very little snow remaining. Lawers ridge was the most distinctive:

The highest point of the Corbett is where a cairn used to be... Now, it's just sad remains...
This is the true summit (said Panther, after double-checking with Mister Garmin): We spotted a large cairn about 100m to the west and headed for it to shelter from gusty wind. Here Lucy posed for her summit snap: her 66th Corbett (our no. 138):

We sat down to have a cuppa. Some other walkers arrived from Loch Turret side, but we were the only ones doing this Corbett from the north-east. I guess despite the great track up the eastern side, this route is not as popular as the Glen Turret approach, but we really liked it, and the best was yet to come

At some point we spotted a large bird of prey hovering above us. I posted a few photos in wildlife section, link here:
https://www.walkhighlands.co.uk/Forum/viewtopic.php?f=3&t=80569
Having finished our sandwiches (no salami this time, ha ha ha), we packed up and headed back down to Glen Almond. The easiest way would be to retrace steps down the excellent track, but we wanted to be a bit more adventurous and took a line down the pathless slopes of the other shoulder of Coire Garbh, hoping to pick a track in Coire Chultrain. Initially, the terrain was peat-haggy and rather wet...

...but later on we enjoyed a pleasant descent down grassy slopes, with superb views to Glen Almond once again!

Coire Chultrain is a charming spot, wish we had more time to explore it, but it was getting late and we still faced 2 hours drive back home, so we had to hurry... 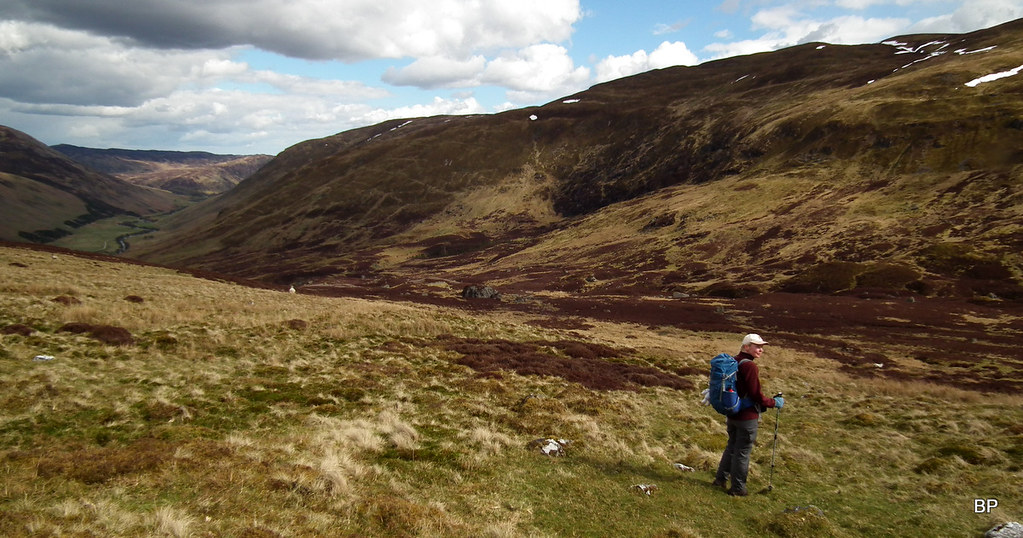 2018-04-29 auchnafree 181 by Ewa Dalziel, on Flickr
The estate track was there, as we expected, following Allt Coire Chultrain: 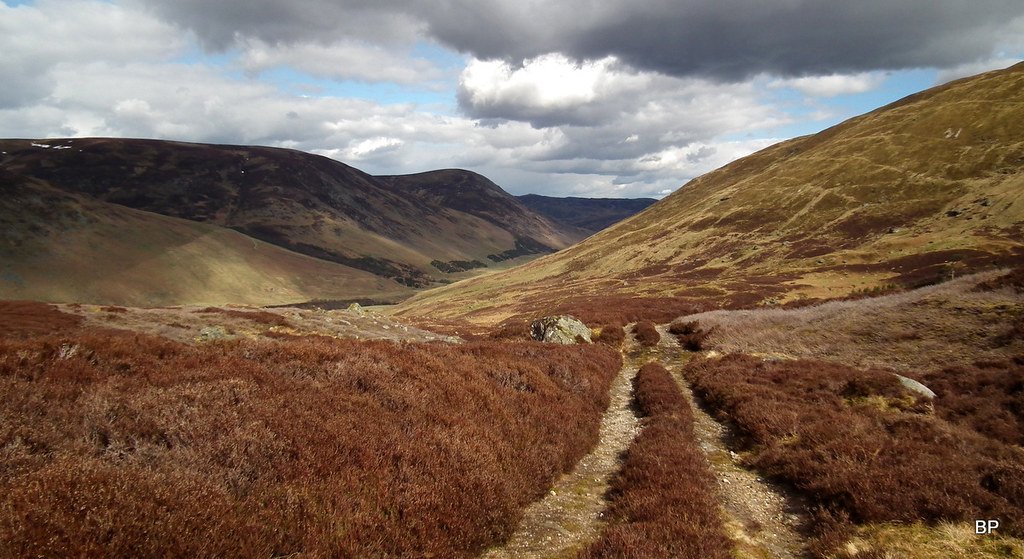 2018-04-29 auchnafree 187 by Ewa Dalziel, on Flickr
We descended on this track back to Glen Almond, enjoying the afternoon sunshine and admiring the steep slopes of Conichan Castle across the glen: 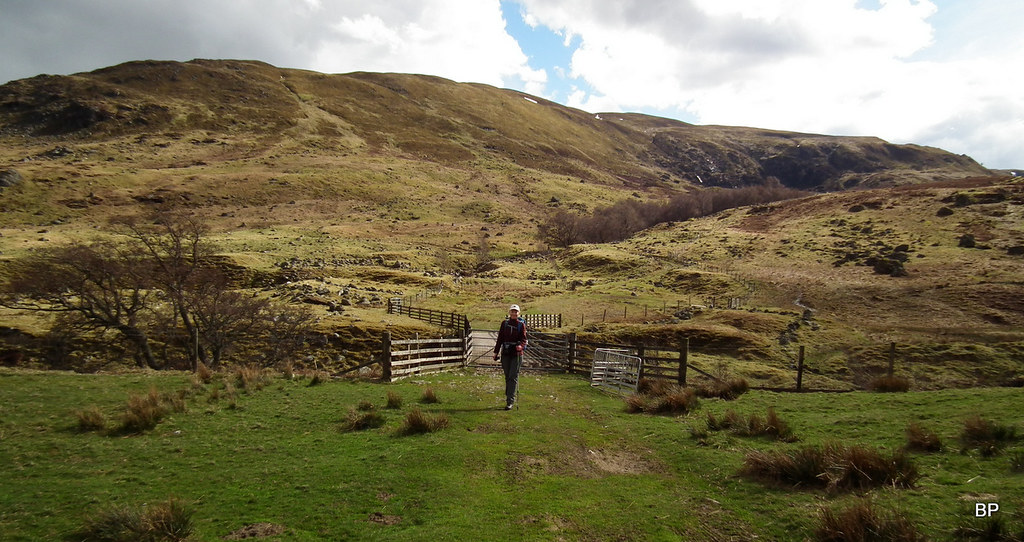 2018-04-29 auchnafree 199 by Ewa Dalziel, on Flickr
We spent some time taking photos of lamb kindergarten 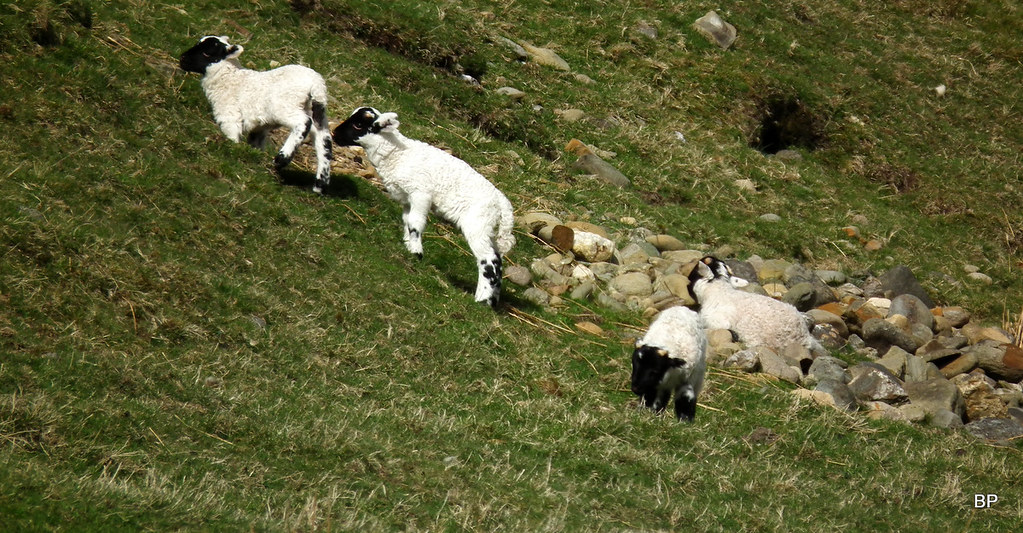 2018-04-29 auchnafree 197 by Ewa Dalziel, on Flickr
...before returning to the main road and walking back to Newton Bridge. We were really happy with today's route. Not only did we bag two listed summits, we also explored a charming glen we had never seen before. It might be far away from home but it was definitely worth the long drive! The circuit we did might seem a bit too long for some (27km, 1100m of ascent), but it's mostly quick going up/down tracks, even the pathless sections are not much of a problem. A highly recommended route if Almonds are your best friends

...........
As we were leaving Newton Bridge, we discussed the remaining mountains in this area. We still had 3 Grahams here to tick off, all 3 could be done in one long day from nearby Amulree. We were both very eager to return for another visit and the following weekend (the Mayday bank holiday) we visited Amulree to climb The Thrilling Trio. TR to come soon!

An intriguing route that, BP, and fantastic sheep photos too

.
This looks a much more interesting way of bagging the Corbett than the usual approach - I'm tempted to have a look at this route myself now - definitely worth the extra effort in terms of distance (and ascent), I'd say!

The scary sheep is a Caledonian Killer. These were bred so that the rams defended the flock from rampaging herds of haggis. Probably

.
This looks a much more interesting way of bagging the Corbett than the usual approach - I'm tempted to have a look at this route myself now - definitely worth the extra effort in terms of distance (and ascent), I'd say!

Definitely worth the effort, especially Coire Chultrain, but Glen Almond is a superb walk by its own means. I haven't done the usual route from Turret side but i can't see it being any better (unless you add Ben Chonzie). The network of estate tracks is very helpful... And despite hundreds of sheep everywhere, we didn't pick a single tick

The scary sheep is a Caledonian Killer. These were bred so that the rams defended the flock from rampaging herds of haggis. Probably

Ha ha, you might be right here. I've seen this "killer breed" before, in different places we visited. But they are not the only scary animals in Scotland. I spotted a sheep version of a unicorn once...

The area of Almond/Amulree is much more interesting than I initially thought. I'm currently writing another TR about hills in this corner

Did this route today, easy enough wander and frozen bogs, however, there's now an electric fence separating the Graham from the descent route. Eventually found a way through it but there's no style that I could see.