We travel to be inspired or to elude the everyday. We escape into the hills for a variety of reasons, yet often return having experienced something unexpected or unusual that we hadn’t expected.

And so it was with a quick overnight trip to Kintail. I hadn’t expected preconceptions to be challenged to such a degree or to enjoy the outing so much.

My mental picture of Mullach na Dheiragain had evolved over the years. It was just an incidental part of something bigger, an adjunct to a neighbour. Rarely had I considered it to have its own redeeming features.

Its summit waited at the end of a gruelling ascent to gain the mid-point of the challenging Mullardoch Round. As a sprint or multi-day trek, it was a staging point, a tick on the list and something to be grateful to have passed and left behind. On the other hand, from Glen Affric, it sits at the end of the elongated spur running north east from Sgurr nan Ceathreamhnan and, provided you had the time, you really ought to pop along and pay it a visit.

In both cases, the hill itself seems almost secondary. It’s a station on the way to somewhere else or an obligation, rarely an objective in its own right.

My problem was, it remained unvisited. I’d done the northern four of the Mullardoch round on their own, shying away from the marathon challenge of twelve in one go. I’d also approached these other Munros from Affric. However, I’d never explored the upper reaches of Glen Elchaig and how they offer the chance to attain the Affric ones from the north west.

When a Sunday evening’s forecast promised a sunny Monday and a dry Tuesday morning, I decided to snatch what I thought would be a dull trudge to visit an uninspiring destination. Tent, bike and gear were thrown into the back of the car and, by lunchtime, tarmac turned to sound gravel on the estate road up Glen Elchaig. The lack of any significant gradients made for a gentle cycle in the spring sunshine. Only one challenge seemed to face me as a notice attached to one of the gates forewarned:

In the end, I passed them with a mutual sense of curiosity and suspicion. Protective mothers shuffled to stand between my metal steed and their off-spring while those clearly carrying the extra weight of an unborn calf simply and stubbornly refused to move. We all pushed on. Loch na Leitreach - with the white gable end of Carnach

From some distance, zig-zags cut into the slope above Iron Lodge let you know what’s in store. Yet, once off the bike, with a full pack hefted on the shoulders the map hints that they represents the majority of the height to be negotiated - or so you think. The initial zig-zags are steep. Then the ATV track wends its way up, down, round a bit more, up again, round and ultimately towards and past Loch an Droma. There the track splits. Descending, the view of Loch Mullardoch emerges and the path spits you out at a melee of bleached ATV bridges spanning scarred peat hags and merging streams. Beyond, a camping spot could be chosen with Mullach na Dheiragain in touching distance. Loch Mullardoch peeps out from the east Having selected the least wet patch, rather than anything resembling the driest, it was time to rest. Here would do. Two streams converged close by and, at 305m, an early start the next morning should see me easily achieve my objective before heading back towards Glen Elchaig to meet the arrival of the promised adverse weather. A peaceful evening awaited, and I’d finally escaped the persistent cuckoo that had followed me all the way to Iron Lodge.

Later, while clutching a mug of tea and nursing a bowl of couscous and peperami, a figure appeared in the distance, then another trailing wearily behind, coming off the lower slopes of Creag a Choir Aird. They were already ten hours into their day having been all the way round to Beinn Fhionnlaidh. They still had to return to their tent, almost halfway back to Killian. I was left in glorious solitude, with a far shorter day in prospect.

As shadows crept up the slopes of Mullach na Dheiragain I snuggled down with a miniature malt, a remnant of my late father-in-law’s collection. He was a golf addict who would not have appreciated the setting. By 1.00am I was regretting bringing my lightweight summer sleeping bag in the interests of weight: the down jacket went on. By 4.00am my toes were decidedly cold. I was grateful for my 5.00am alarm and not surprised to see thick layer of frost on the tent when I emerged. Fortified by hot tea and muesli, I headed off at 6.00am to skirt the crags below Creag a Choir Aird before approaching the ridge from an easier angle. Not sure if there was a clear way, I left the stalking track within a few hundred metres and picked my own line, striking diagonally upwards. The early morning sun had already disappeared and grey skies began to dominate the horizons. A breeze stiffened and maintaining progress helped keep the chill at bay.

As hoped, round the corner the angle relented as the bowl of Coire Buidhe na Haradh opened up. Easier ground led to the skyline above the barely discernable Bealach Sithidh, beyond which emerged an impressive view of the ridges, corries and peaks bounding the opposite side of Glen Sithidh. Without seeming to make too much effort, I was on the ridge, already over 600m, and the slopes ahead appeared benign: could this just be a stroll? Reaching the initial top of Mullach Sithidh wasn’t quite an early morning amble, but the even gradient lent itself to a steady rhythm and soon I was enjoying the view across to the summit of Mullach na Dheiragain itself. Worryingly, a stretch of snow appeared to obstruct the approach and, as I’d already crossed some patches and was conscious how hard it was, I began to wonder if a bit more gear might have been useful. Remnants of winter below the summit of Mullach na Dheiragain

However, as is so often the case, distance and foreshortening told a more challenging tale and it didn’t prove to be as extensive as I feared, neither was it anywhere near as steep.

So, just over two hours from my tent, I sat on the summit and did the obligatory “taking-it-all-in.” By now the advancing front was making its presence felt. Ever-greyer skies sharnk the horizons and hints of showers could already be made out in the distance. Still, there was no urgency. Here was a top that could be enjoyed for a while longer.

Nevertheless, as I looked south to Sgurr nan Ceathreamhnan, I was grateful for two things. The southern top of Carn na Con Dhu, nearly two kilometres away, was 15m lower than where I sat: that saved an extension to the walk. But, more importantly, no amount of foreshortening and optical illusions could hide the fact that the northern slopes and ridges of Sgurr nan Ceathreamhnan still held a significant amount of snow. After the previous few cold nights it would be hard and no quick slushy soft kick would tackle them. With the winter gear left in the garage back home, an earlier idea of doing the whole horseshoe in an anti-clockwise direction may not have proved possible. Still, it all looked impressive and more than sufficient reason to come back.

Knowing how long it would take to get back to the car, and not wanting to get caught by the promised bad weather, I left the cairn and strode back down the ridge. A final glimpse of Loch Mullardoch from Creag a Choir Aird

Reaching the top of Creag a Choir Aird, I struggled to make out my tent in the bowl below, but more successfully traced out a gentle descent that wouldn’t put too much strain on my knees. In effect repeating my ascent route, there’s not much else to say, suffice to say that a mug of tea was welcome as I packed a dry tent and began the walk out. My tent's down there somewhere

The retreat back past Loch an Droma is a curious narrow experience, with the hillsides tightening as the watershed between east and west is crossed. The descending zig-zags were as briefly painful as I thought they might be, but then the cycle out down Glen Elchaig was a gentle hour of hurtling, coasting and light pedaling. Mind you, I suffered later. It was the first time on my bike in such conditions for nearly a year, and sitting on a fixed machine in a spin class doesn’t prepare you for the jolts and juddering. My neck has only just recovered. 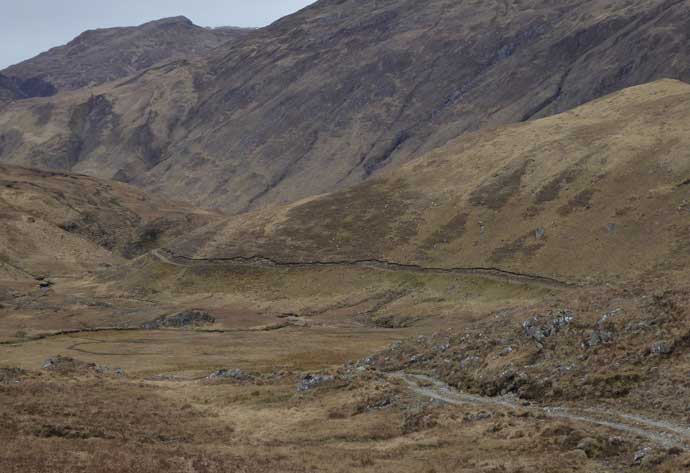 By the time I reached Killian, I knew I’d already dodged a couple of showers and a waterproof-clad figure slogging along the Cape Wrath Trail confirmed that rain was already falling further toward the coast.

The way out - back above Iron Lodge and the car is just round the corner - honest - well, maybe another couple of corners

Changed into fresh clothes, with the bike in the back of the car, I munched on a sandwich while pondering the experience. I’d left at 1.00pm and arrived back exactly twenty four hours later, but it seemed a whole lot longer; not in a negative way, but in a way that I could enjoy dwelling on and wondering how it was all squeezed into such a short time. Glen Elchaig was new to me, and one I’d be more than happy exploring again to see where some of the other routes led. The wild-camping had been in an idyllic setting, if somewhat chilly, but that was my own fault. And, to cap it all, Mullach na Dheiragain had surpassed my expectations to such a degree that I felt guilty about it as I started the drive home.

It was a healthy warm up for the next trip – Skye awaits.

A great read and lovely photos of a very remote area - and a massive warm up for Skye, where the walk-ins are short

Thanks for posting, it's a mountain we hope to visit sometime this year ... or before we become too decrepit to visit anymore hills

Hi, lovely descriptive account and a wonderful hill day! I was wondering about doing this hill from that direction but walking in, but a little concerned about the calving cows as I normally take one of my dogs...