Three Grahams a day keep the madness away. At least that's what I thought when we planned this excursion. Another long drive down the A9 for us so we wanted to squeeze in as many hills as possible. Having pored over maps, Graham guides and walk reports from Walkhighlands, for a significant part of the week, I plotted a route including 3 Grahams, starting from Amulree. The walk would include Meall Dearg as well as twins Meall nan Caorach and Meall Reamhar. These hills are usually climbed in 2 separate outings and often in winter conditions as they offer easy, grassy ascents with helpful estate tracks, especially on Meall Dearg.
It was the long May weekend and we wanted to do some Munros at last (will we ever compleat?? at this pace, it might take another decade!!!) but the best day weather-wise was said to be Monday, so we preferred to visit lower hills on Sunday. Plus, the best chance of sunny spells was over the south-east, so the Amulree Triplets looked like a perfect place to be.

One might call this outing a Sunday stroll compare to what some WalkHighlanders do when weather smiles (I'm talking multi-peak campaigns with overnighting on mountain ridges, etc). Yet the benign walk over Amulree Triplets added up to 1200m of ascent and 27km in distance, so not a stroll after all!
From Amulree, we took rob Roy's Way then climbed the estate track to the ridge of Meall Dearg, over a lower top, then descending via Beinn Liath to pick another track and follow the old General Wade's military road back to the village. After a short refreshment break in the car, we walked down A822 for a short distance, turned to Girron and followed the track past the farm, to climb the easy slopes up Meall nan Caorach. The traverse to Meall Reamhar was the only steep part of the whole route. Finally, we dropped back to the track in the glen and retraced our steps back to Amulree.

Track_AMULREE 3 06-05-18.gpx Open full screen  NB: Walkhighlands is not responsible for the accuracy of gpx files in users posts
Now to the details. Weather was good from the early morning, if a bit windy. We parked in a layby opposite the old hotel (currently under renovation). We decided to go up Meall Dearg first, for no particular reason. This meant walking the Rob Roy's Way for about 1mile:

The surrounding pastures were full of cute little lambs, some still asleep, some bouncing about:

The best views were across the glen to Beinn na Gainimh, which we had climbed the week before: The track is easy to spot (keep gates closed for the sake of sheep!) and it makes for quick marching:

The track follows Kinloch Burn, past a line of grouse butts, gaining about 250m, with lovely views opening up:

Looking back along the track, with the twin Grahams on the horizon:

A small top, Creag nan Gabhar, is passed on the way, as the track continues over heathery plateau:

Just past Creag nan Gabhar, we left the track and continued over the moorland to the next wee top, 608m but not named on 1-25k map. There is a sketchy path to begin with, but it soon disappears in the vegetation.
View south from the 608m top:

To the north, the next target top, Creag an Loch. To the right, the true summit of the Graham:

The traverse to Creag an Loch requires some drop and re-ascent, but the ground is easy, one short boggy section on the bottom of the col but nothing scary. Higher up, we found another path, most likely just an animal track, and followed it up to the summit of Creag an Loch, which has lovely views in all directions and a small cairn. The hill behind me is Meall Dearg itself: Cloud was still covering the higher hills, I spied the northern horizon for Schiehallion... Of course, there was a wind farm in the way

Hoping that the conditions might improve and we will catch better views of higher mountains later in the day, we turned east to face our first Graham of the day. And it was a superb view down to the high bealach separating the two tops, with Loch Fender just to the left:

2018-05-06 amulree 3 056 by Ewa Dalziel, on Flickr
We descended on soft heather to the bealach where we stopped for a few minutes for another photo session...

It's only just over 100m of re-ascent from the bealach to the summit, some rocks to clamber over if you wish... ...but no real obstacles en route, and views back to Creag an Loch are splendid:

The summit is marked with a trig point. It was still windy and the wind had a chilly edge hence the winter hat. Our 96th Graham (Lucy's no. 63): After a short refreshment break by the trig point, we had a look at our descent route. We intended to pick the track visible here in the middle:

The track goes much further than marked on the map, it actually traverses jut below the summit, to the east of small unnamed top. We decided to drop to it to avoid nasty peat hags on the next bealach. Soon we were on the track, and the rest of descent was easy going.
Looking back to the summit of Meall Dearg:

Let's head back to Amulree now! The track traverses Beinn Liath, another insignificant top, before dropping down to Glen Fender. The glen was alive with the sound of bleating, there were sheep and lambs everywhere, looking at us curiously

We left the track just as it started to ascend again, to follow the right of way (General Wade's military road). Visible here in the far distance: The right of way crosses a couple of pastures, a stile is provided to climb over a high fence, eventually we crossed a small bridge over Glenfender Burn and turned SW to follow the military road back to Amulree.
Looking back to Glen Fender:

General Wade would be proud of his road

It is still used, if only by sheep and panthers 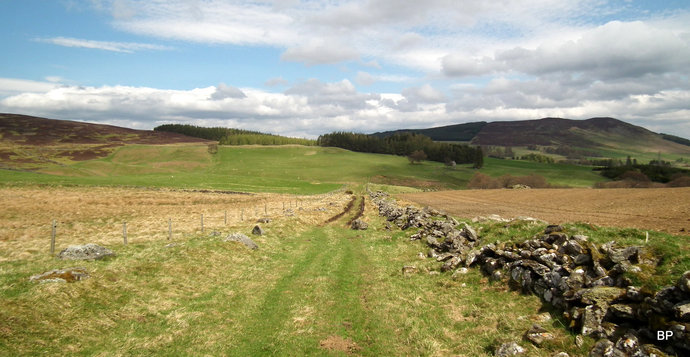 After well deserved rest, we started the second part of our circuit. First, we followed the road for about 700m. Not a very pleasant experience, I must say. Most time there is no grass verge to jump on to escape from a speeding car

Thankfully, it was only a short distance of a life-threatening march, before we turned off the dreaded A822 onto the access track to Girron: Past the farm, the track becomes grassy and is wet in places, but it still offers easy going. We met a bloke on a bike (I guess he was cycling through the high pass between the hills) and he was the only person we saw on the hills all day. I had actually expected this area to be more popular, but maybe the Grahams are neglected due to the close proximity of Ben Chonzie and other Almond delights

Which is a bit of a shame, as this trio are very nice, much nicer than anticipated. Maybe we should run an advertising campaign for some overlooked Grahams

But back to our route...
View back to Girron:

Walking up the track. It is possible to stay on the track all the way to the high col between the two Grahams, then do a T-shaped walk, but in my opinion, a circular is more interesting, despite more walking on pathless ground.

When the track ascended about 50m and took a sharp bend, we left it and tackled the grassy slopes of Creag Ghorm. The best views at the moment were back to Meall Dearg: From the top of Creag Ghorm, it's only a short walk to the summit: View back to Creag Ghorm from near the summit of Meall nan Caorach: The summit was windy and I had to take my hat off, to make sure it didn't fly away We found a large boulder to hide behind for a short rest, then it was time to tackle the final Graham. The descent-reascent for this duo is just about enough to make Meall Reamhar a Graham and a Marylin (154m drop according to HillBagging database, our GPS showed even less). Not much of an ascent, one might say, but it still looked steep:

2018-05-06 amulree 3 174 by Ewa Dalziel, on Flickr
We followed a line of fence posts down to the col, then climbed up the heathery slopes to the summit of Meall Reamhar. The ground to the left of the fence line (as you face uphill) is slightly easier, less overgrown and not as wet. Once on the summit, we both agreed that there was something seriously wrong with the land to the south and east of us... It was TOO FLAT!

The proof that the Earth is flat 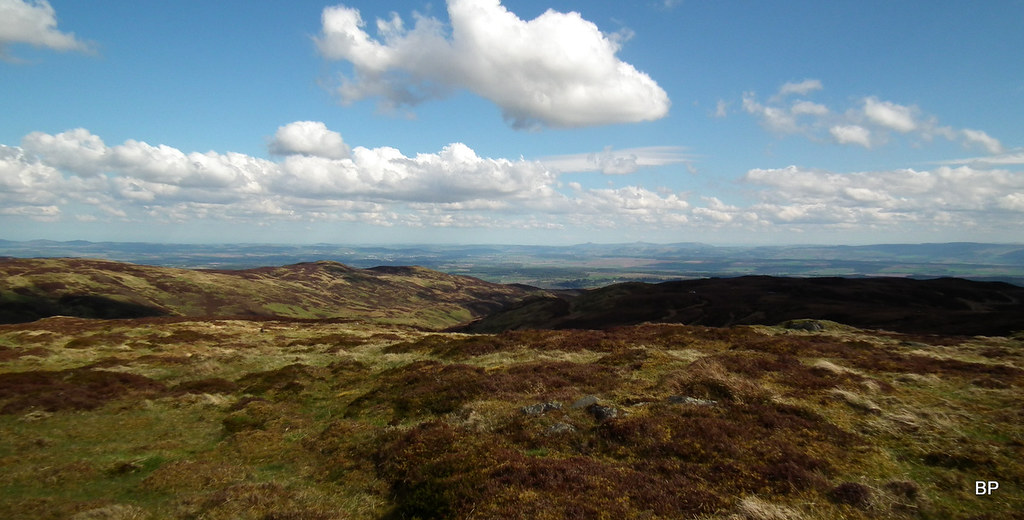 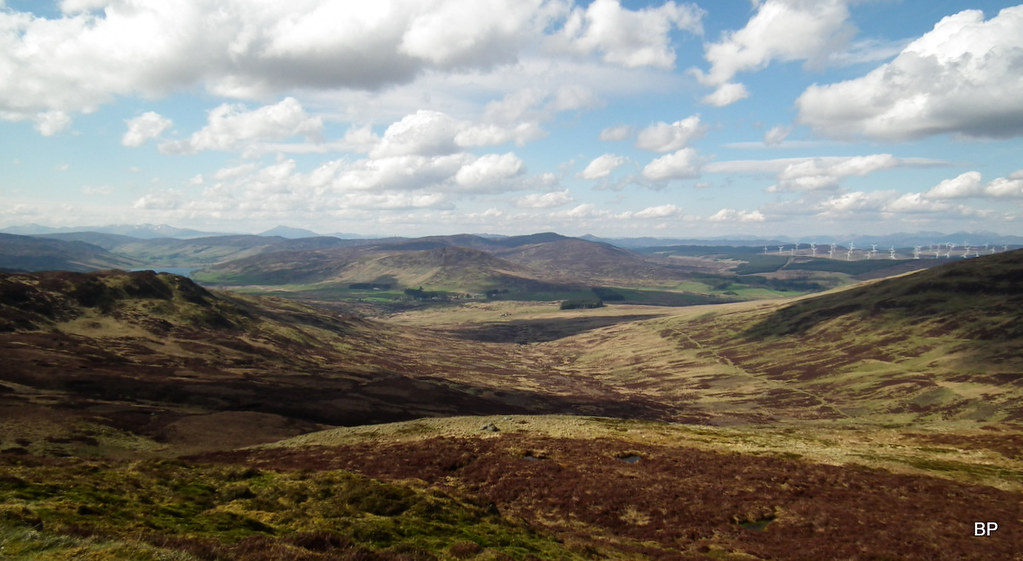 2018-05-06 amulree 3 180 by Ewa Dalziel, on Flickr
The dreaded wind farm! At least there are some nice mountains in the background!

We celebrated with 5 min rest and a few smiles 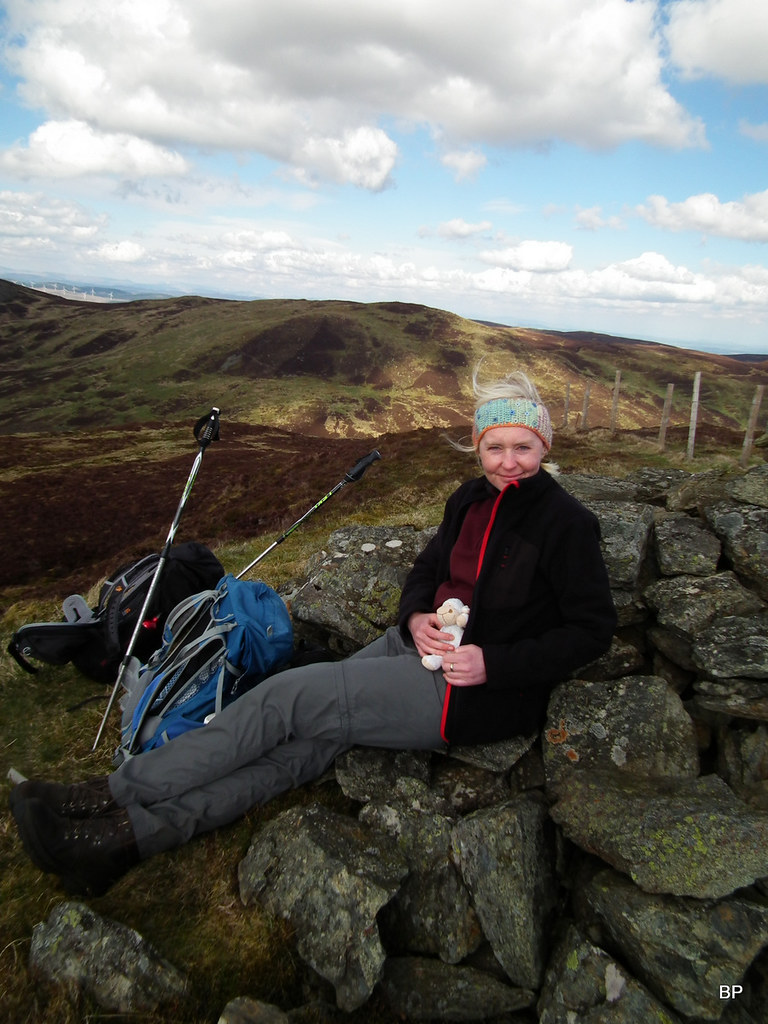 2018-05-06 amulree 3 192 by Ewa Dalziel, on Flickr
To return to the glen, we aimed due north, down the slopes which were initially dry and grassy, but a bit overgrown with heather lower down. The bottom of the glen is wet, but soon we reached the main track, crossing Girron Burn on a small, funny footbridge, made of two short planks

The final stage walking on the road is not worth mentioning, maybe apart from a few hairy moments when we were passed by speeding idiots

Summing up: a grand day with 3 new hills under the belt. I was surprised again, that we didn't bring home any ticks, judging by the number of sheep on pastures, we should have picked dozens of the wee b***gers. But why am I complaining? Better without the blood-suckers. Hopefully they were decimated by harsh winter and won't bother us at all.
..............
We returned home with huge smiles on our faces. But this wasn't the end of Bank Holiday weekend! Forecast for Monday was optimistic, so we headed for Loch Rannoch to bag two new Munros. As things went, we threw in a bonus Corbett as well. TR to come soon.

Re: Buy 1 Graham, get 2 free, triple thrill in Amulree!

Re: Buy 1 Graham, get 2 free, triple thrill in Amulree!

Yup, they do make a nice group for a day's walking. Was up these three at the start of February- your route up MD was a bit longer than mine, think I only ended up with 16km and 900m for the whole day but your route looks more interesting - cheers