As the weather was forecast to be sunny & warm all day, I decided to continue my quest to complete the Donalds. This time I was off to do Cauldcleuch Head. To make a longer day out of it, I decided to continue round the ridge returning by Tudhope Hill, a circuit of around 7.6 miles. I parked at the forest entrance & walked along the road to Billhope. The lower part of these hills are now part of a new woodland, & have blue topped posts marking paths up on to & around the hills. I left the main track shortly after passing the next house, turning right at a quarry, & followed the good path steeply uphill. The path came to a sudden end, with only a narrow faint path beyond. There weren't any more of the blue posts to be seen. I continued for a bit, but the so called path didn't look like it would get me up the hill, as it just contoured along the hillside to meet the burn. 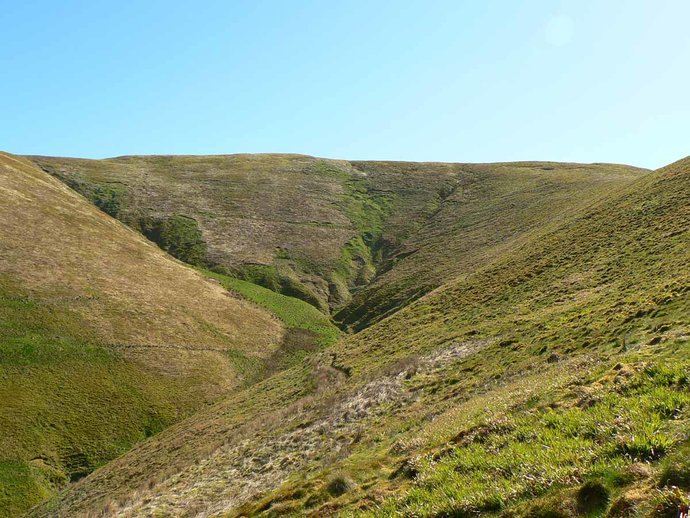 Stob Fell from the path to nowhere

Enough of this, so I headed straight up to the ridge, where I reckoned there should be a better path to follow. The climb to the ridge was very steep to start, but gradually lessened with height. When I reached the ridge the first thing I saw was the blue posts marking a good path. I missed the point where this path had left the main path, somewhere before it had ended, & I ended up on the path to nowhere. So if following my route, don't miss that important right turn. View back down the ridge from the good path

I could now follow the posts up onto Stob Fell, where the views over Liddesdale really opened up. It was then up onto Pennygant Hill where a well deserved break was had. Good places to sit on dry grass or rocks were hard to find along the entire route, but Pennygant Hill had a mini cairn which made a comfy seat. Continuing, the posts marked an easy route to the next hill, Muckle Land Knowe. After here, the next section was more boggy with less defined paths, & remained so until Langtae Hill. I initially followed the posts half way to Cauldcleugh Hill, then left them as they don't go to the summit. After Cauldcleugh Hill, it's a good walk, though very wet underfoot, all the way to Langtae Hill. The posts were once again met at Footman Hass. My route next climbed to Langtae Hill, then Millstone Edge, finally reached Tudhope Hill, with the only trig point on the walk. The posts miss Millstone Edge & go directly to Tudhope Hill from Langtae Hill, so a little shortcut if you need it. Another good spot for a break on Tudhope Hill, with great all round views, especially to Eskdale. From here the weather was so clear, I was able to see all the way to the north Pennines. View back to Cauldcleuch Head The route down from Tudhope Hill

After my rest and a bite to eat, it was straight downhill, back to the car. A brilliant walk, in superb weather. Do this walk on a nice day and you will be well rewarded with a memorable day on the border hills. Pennygant Hill and Stob Fell from back at the start

Re: A day on the Cauldcleuch Head horseshoe

I think I will be paying a visit to this route one day when I am down in Kielder at the beginning of October (assuming I can get a day pass). Hopefully I will be rewarded with a similarly nice day for it.

Your report gives a good feel for what the walk entails.