, you get the picture. Anyway, in reality it was nothing like that, just bl**dy splendid.
Having changed my plans and location at the last minute (yet again), I found myself leaving Spittal of Glenmuick car park at 7:15 am on a chilly but bright May morning. The brass monkeys were indeed looking sad as I left the car, and set off to the visitor centre, passing some early rising locals.

Crossing the flatlands to the start of the climb, the cliffs of Lochnagar peeked coyly out, a promise of splendour to come.

The weather, bog and burn crossing Gods were all lined up in my favour, and I had the opportunity to test the waterproofing on my new boots (Meindl Bhutan - best ever), 100% pass rate. 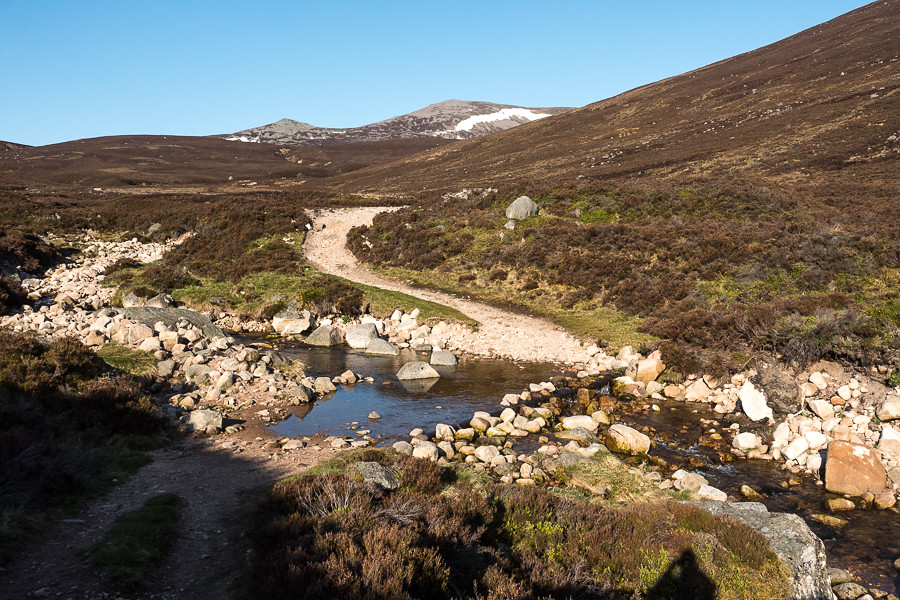 Even I was unable to lose the track as it climbed up the glen, winding round to the north, before coming to a path junction marked by a slightly unnecessarily large and flamboyant cairn, off to the left we go.

A very steady climb on a well engineered path brings you swiftly to the day's showpiece, that view of the Lochnagar cliffs, worth heading a bit further over to the edge of the bealach for the full effect

. , not a bad rockery to have in your back garden eh, Lizzie?
This had taken about an hour and a half so far, but was worth a decent stop to drink it all in and fortify oneself with the Boss's flapjack, nectar of the Gods

Then came the climb through the boulder field but a cunningly laid path led to a straightforward route through the rocks, and this most graceless of walkers was able to float to the top ....

A small descent from the top of the boulder field and then another climb to the long summit plateau eventually brought me to the summit tor, and a scramble over smooth boulders to reach the pinnacle and trig point, more amazing views on offer.

Trig point, Loch nan Eun and towards the second Munro: 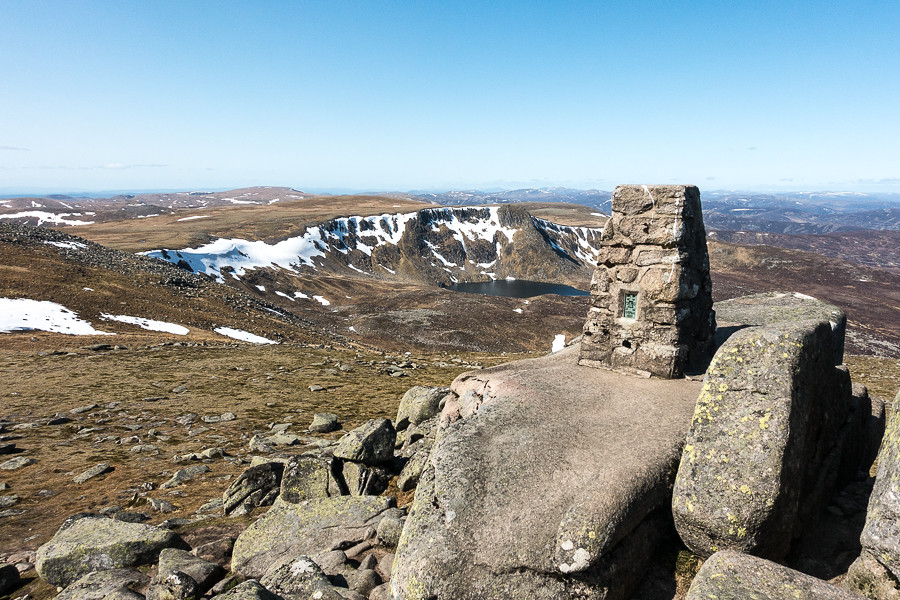 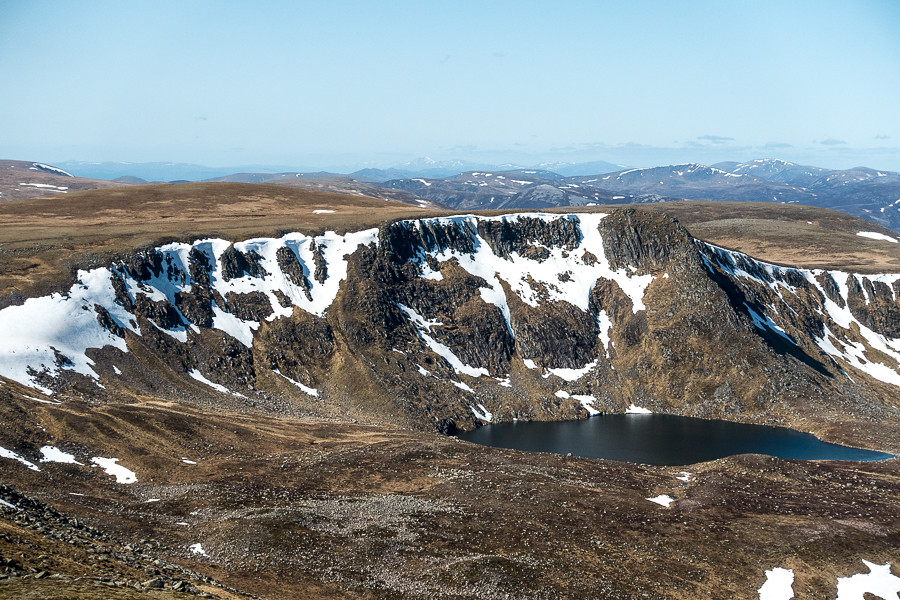 Towards the eastern Cairngorms: 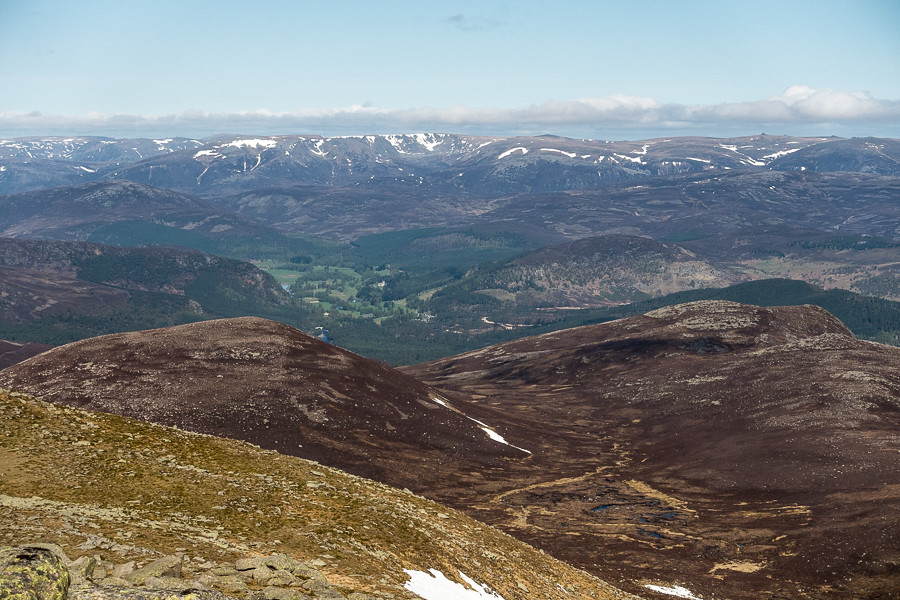 Now, I don't mean to sound churlish and/or ungrateful at this point, but if I have one teeny weeny criticism of the White Mounth circuit, it's that the best bit comes at the beginning of a longish day, rather than halfway or two-thirds the way round ... BUT, it's the best bit of what is still an excellent walk, with a really good ending. After leaving Lochnagar, there's the small matter of the other four Munros to deal with, starting with the rounded summit of Carn a'Choire Bhoidheach, slightly hard to pick out in this photo, but somewhere in the middle, to the left of the cliffs: 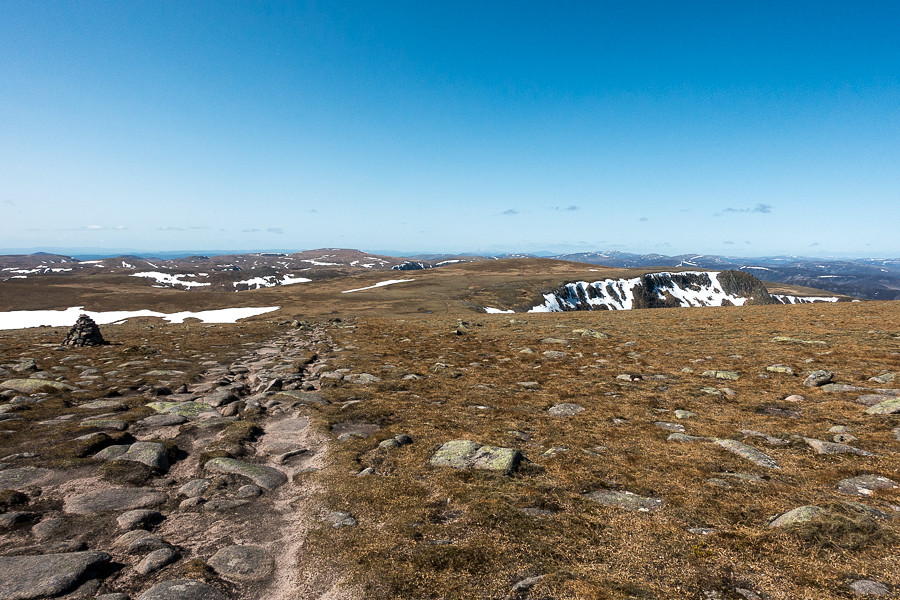 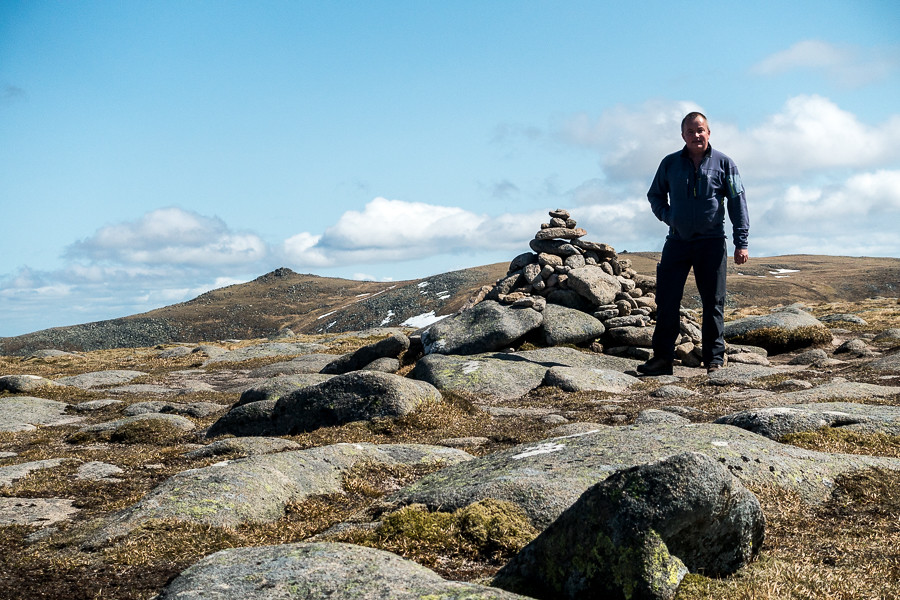 Coming off the flank of Carn a'Choire Bhoidheach, a large snowfield blocked the direct route back to the path. On plonking my boot on it the snow was hard and icy, despite the rapidly warming day. I had no winter metalwork with me so I nipped round the side instead, unlike the two brave souls behind me who took the direct route 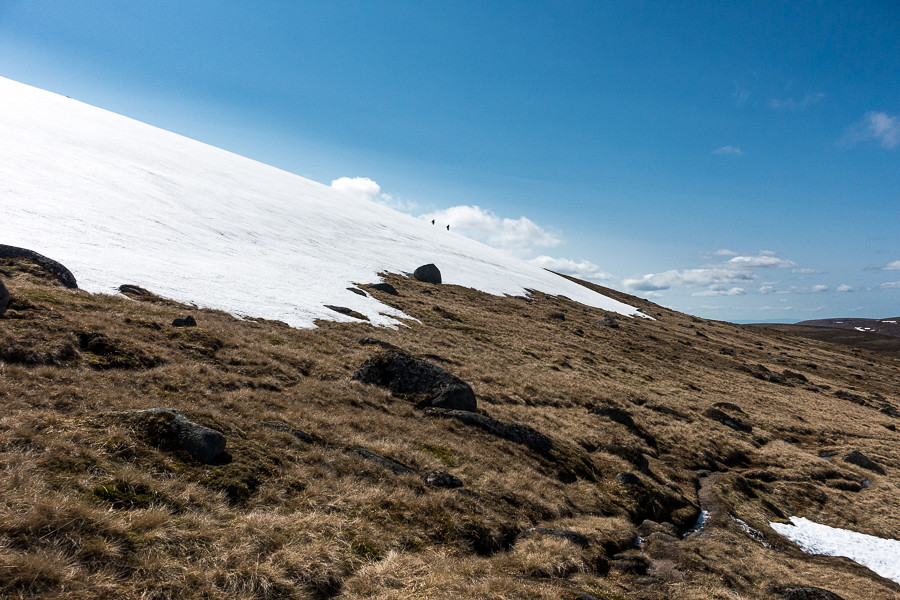 After dipping down, crossing a couple of burns it was an easy climb up to Carn an Sagairt Mor, the third Munro. I think the first cairn was the proper summit, but went along the plateau to the far cairn as well, where there was a small piece of plane wreckage to liven things up a bit: 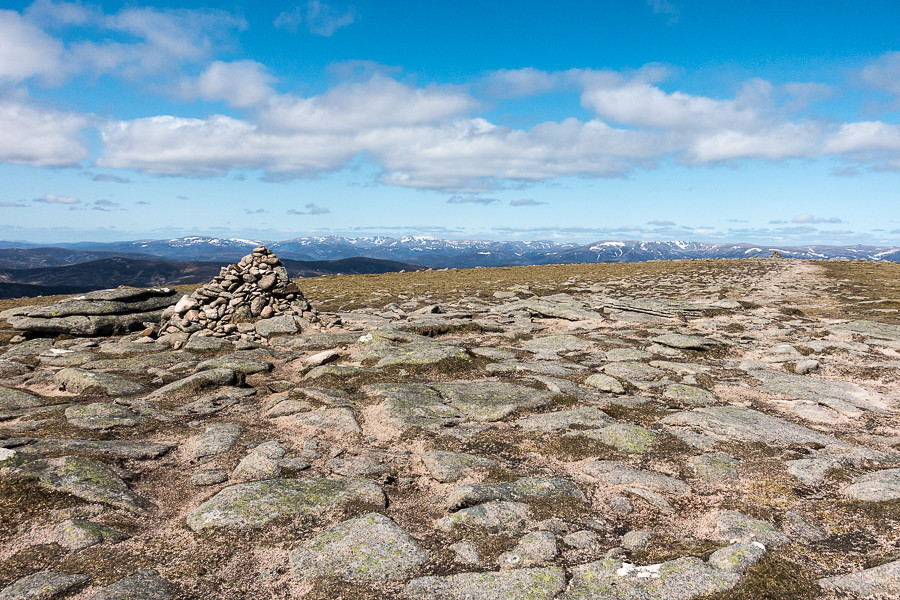 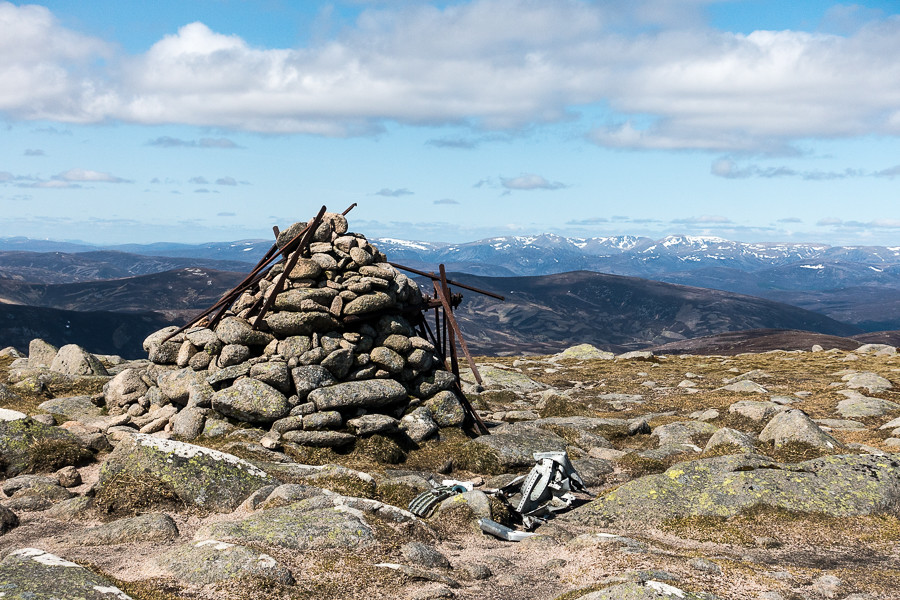 Across the upper reaches of Glen Callater (Charlie's favourite haunt) to the Glenshee Munros, the mighty Tolmount dominating 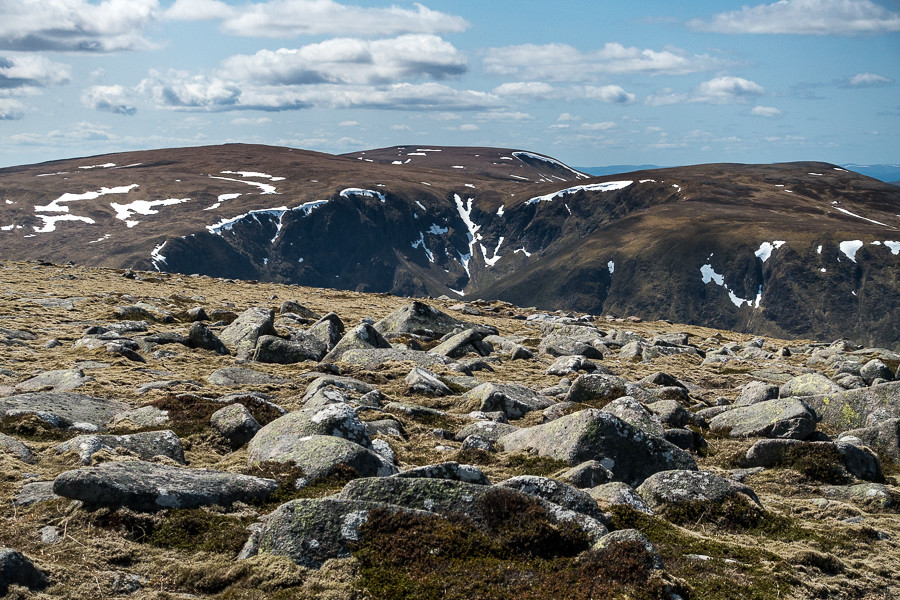 The rolling nature of these hill reminded me of those closer to home in the Yorkshire Moors and Dales. Leaving Carn an Saigart Mor the way ahead to the remaining two Cairn Bannoch, and Broad Cairn (to the far left) was clear and straightforward, aside from remembering to leave the track as it veered to the right and head for Cairn Bannoch instead of Glen Clova ... 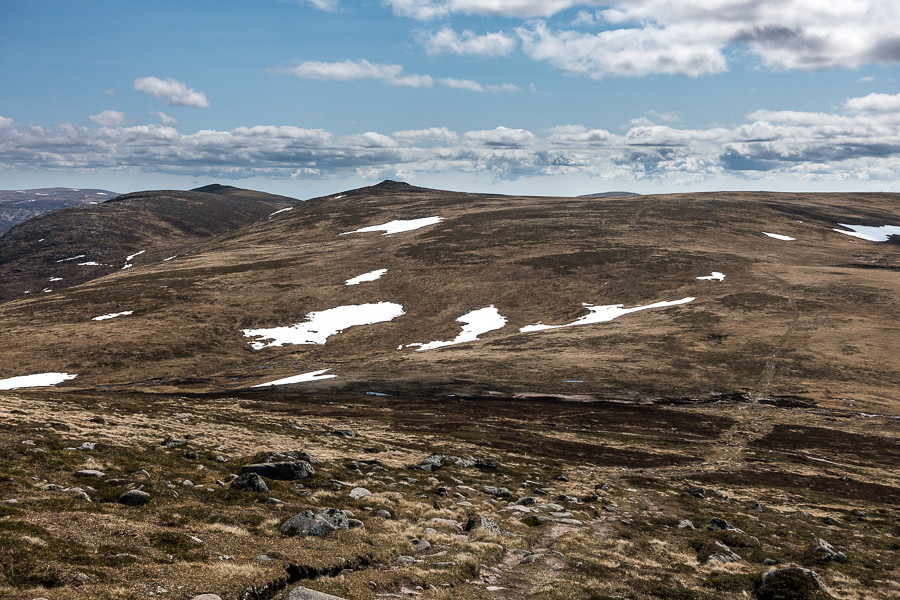 The summit of Cairn Bannoch: 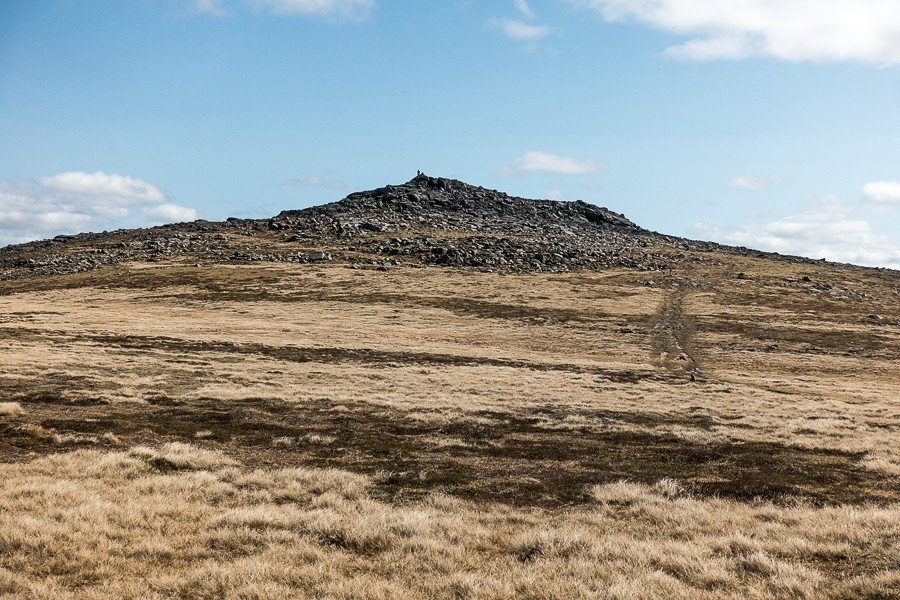 and the view from it across Lochnagar: 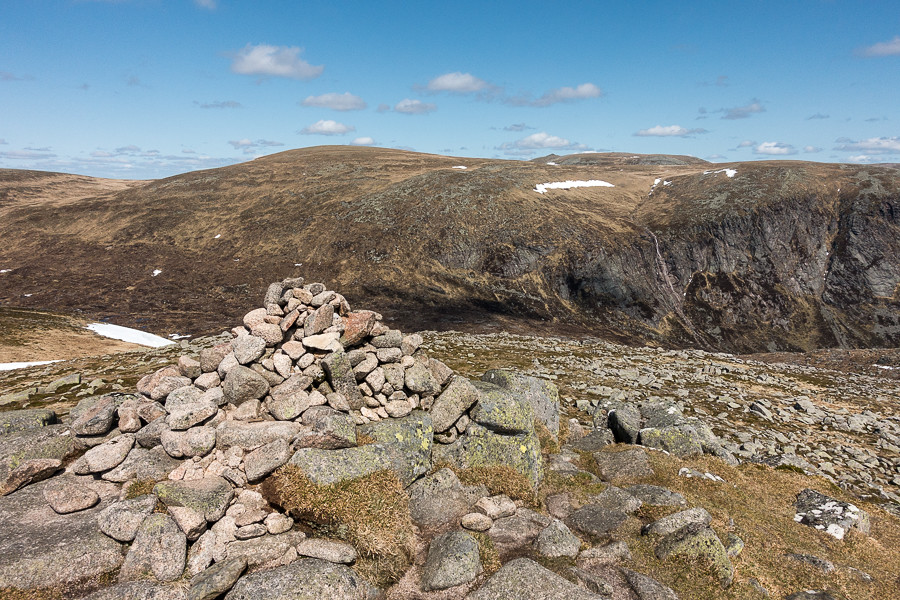 There's not much to say about this section of the walk other than it would be easy to end up going the wrong way in poor visibility, it certainly helped being able to see the small rises that passed for summits, from a decent distance away.
The final Munro of the day, Broad Cairn, gave the first views of Loch Muick, and the long descent and walk out, which for me was the second highlight of the day, a staggeringly beautiful part of the world: 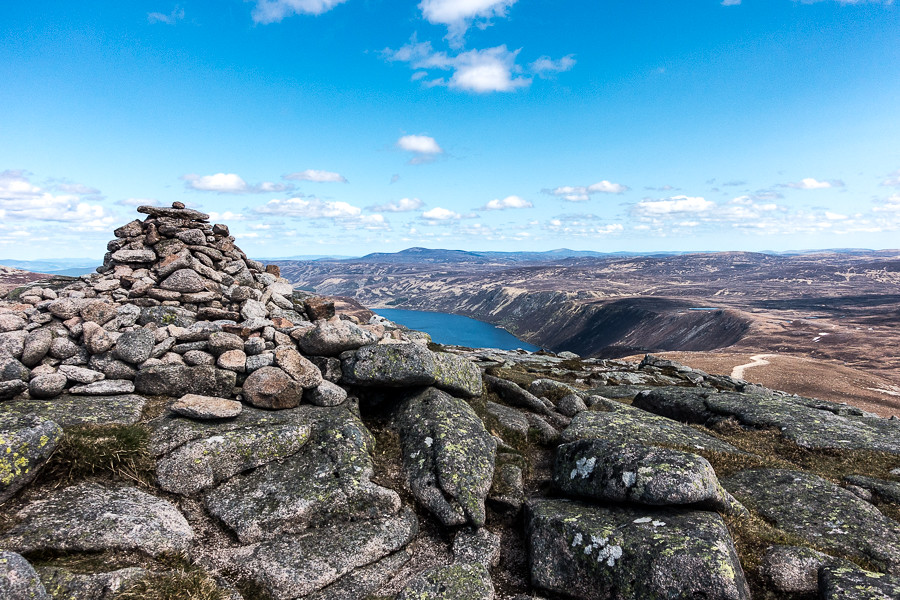 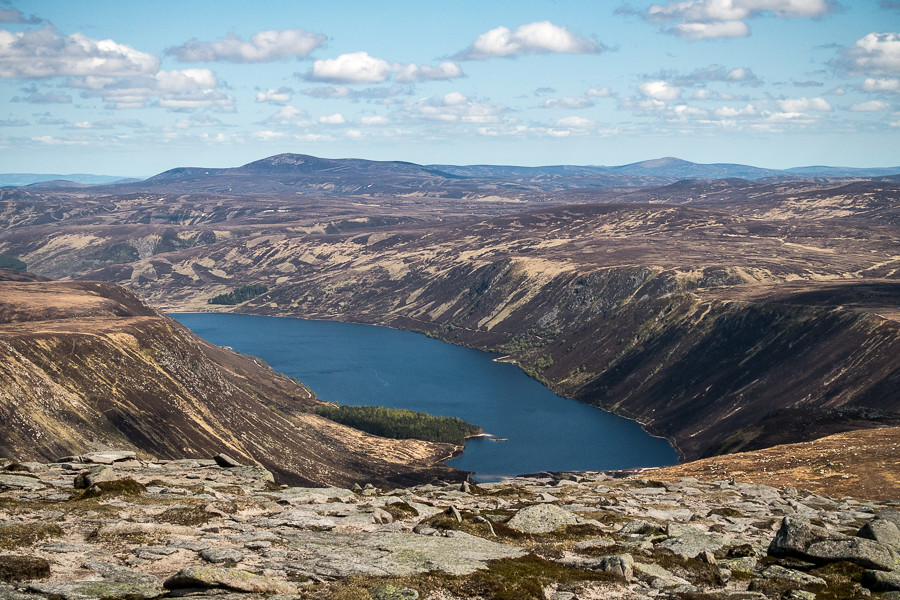 After the bouldery descent off Broad Cairn, a solid ATV track is reached which winds its way along the edge of the cliffs above Loch Muick, presumably built to bring our plus-foured chums from the City up to the grouse butts, and to save the little treasures from being too tired to indulge in mass slaughter

.
It's always worth remembering the landscape photographers mantra of "don't forget to look back ...", the upper reaches of Glen Muick: 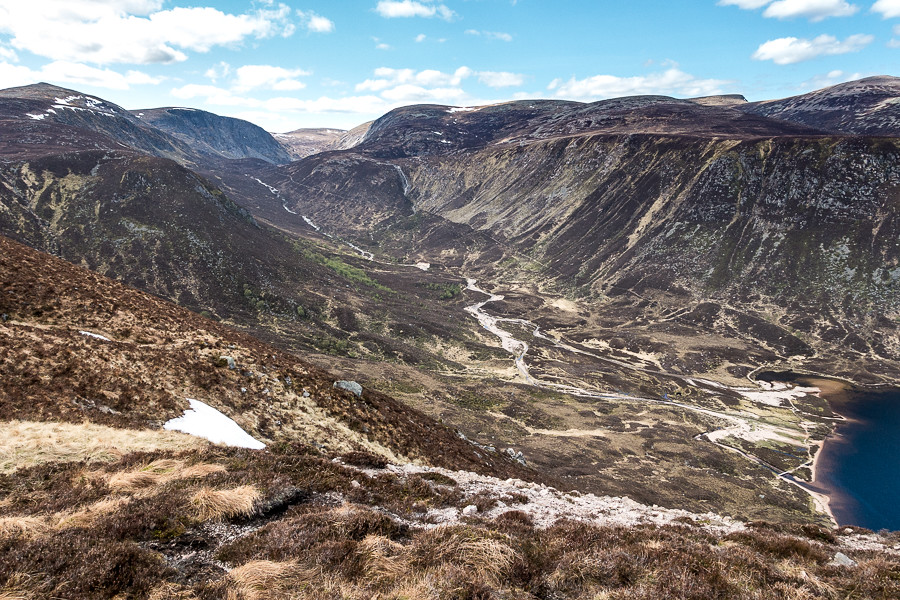 Posh dwelling with Lochnagar far above, and the waterfall just above, wouldn't mind a few days here: 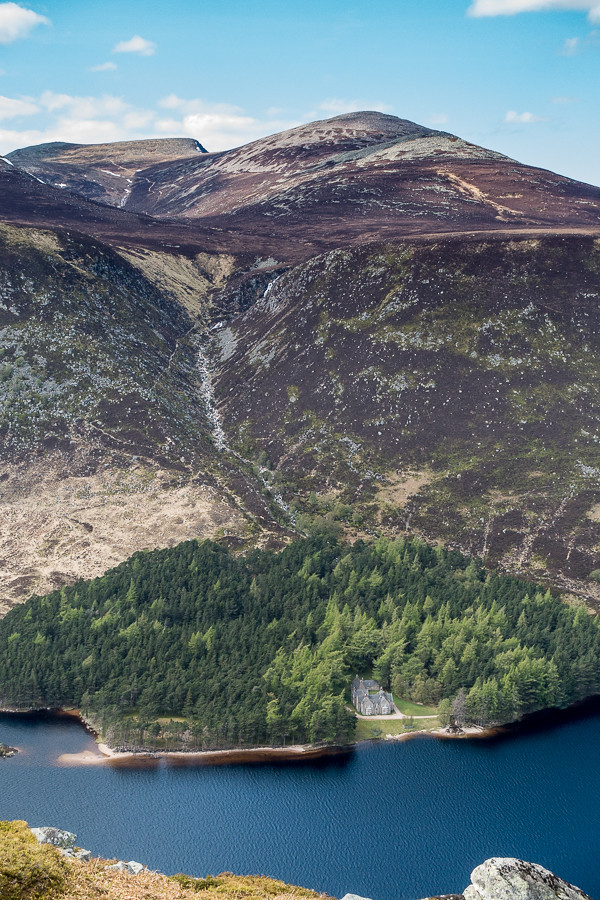 A steep descent (well, steep for an ATV track I thought) brought me down to loch side and obligatory waterfall shot: 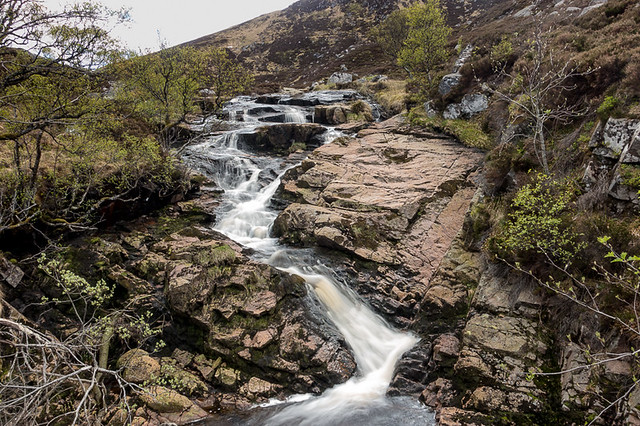 I really enjoyed the late afternoon walk along the Loch. I'd realised that my feet were not giving me the usual jip, so it was hats off to the new boots, a great success. There's a circuit of the loch to do another time, and the scenery provides a great incentive to return: 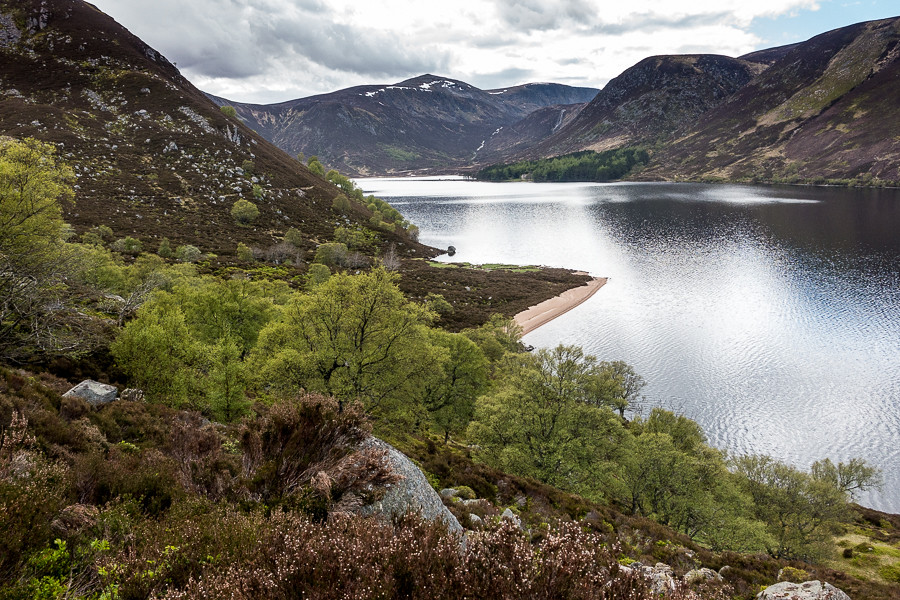 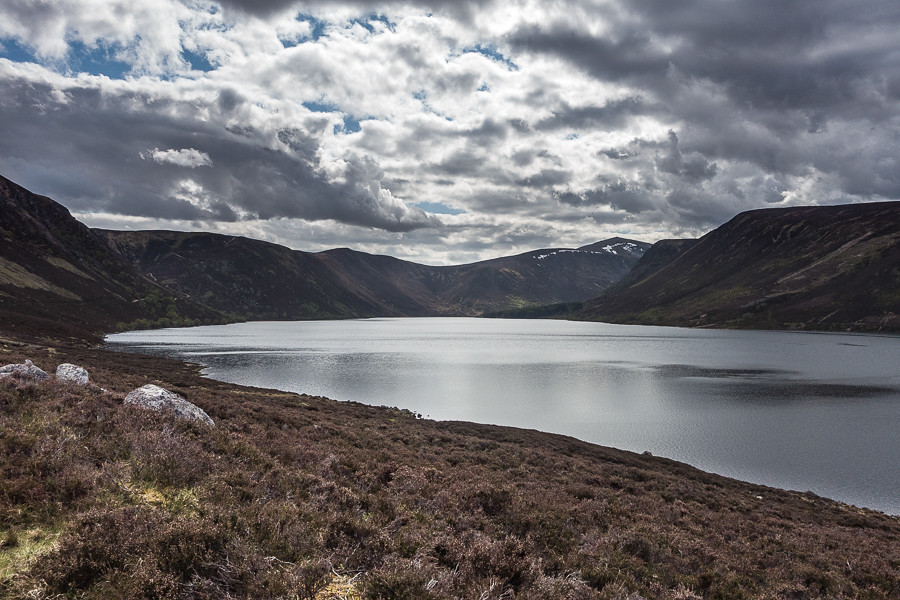 I arrived back at the car at 16:45, by this time it was boiling hot in the car park, and it was back to Braemar for a restorative drink and slightly average fish and chips. I loved this walk, a very different take on the Highlands compared with the majority of the hills I'd done over on the west and north-west. It left me Iooking forward to getting into those distant Cairngorms I'd seen .... one day ...

A lot of folk seem to be enjoying this route just recently.

I agree absolutely with your assessment of this group: Lochnagar, and the walk out are both great; the rest is, well....

I guess the views into the glens are OK, but the hills themselves are underwhelming, especially after the phenomenal beginning.

Brilliant report. I’m a Yorkshire lass myself but now live in Aberdeen.
How long did the hike take you in the end? I am planning on doing them in a couple of days time on my own and trying to plan what time to set off.