As the last walk report for this route was July 2017 and most of the 2016 and 2017 reports talk about the awful state of the track due to the hydro works, thought I'd give an update having done the walk yesterday.

The weather forecast was great, and I used the mention of "early cloud will burn off leaving munro summits clear" to have a leisurely start, parking up just after 11:30 and setting off around 11:50 - knowing it won't get dark until after 10pm does make having a lie-in a lot easier

. There had been no burning off of clouds when I set off though, it was a damp, misty start to the walk with no summits visible. I parked a little further along the road from the track entrance, though as it was a Sunday there was no construction work going on and another car had just parked at the entrance. A sign nearby says where to park just now and that the site office area will be converted to parking later this year. Start of the walk, showing the condition of the hydro track now

Having read the walk reports, I was expecting a quagmire, but it seems that the track has improved since then. Recent dry weather no doubt helped, but I could have done the track section in trainers. It made for quick time heading up the small dam, and by the time I was there, the forecasts came good and the clouds were clearing to leave a beautiful day. Tom a' Choinich was up ahead and looking very inviting Heading towards Tom a' Choinich, still on the track Reaching the small dam and the end of the access track

The track ends at the dam, a few metres of stony path making it clear which way to head initially, but then just following the boggy path; the burn crossings were straight forward in current weather, no wet feet as plenty stones to hop across on.

The route up to the right was nice and clear, following a stalkers path and then taking the route left up the rocky ridge. It wasn't technically difficult and was an enjoyable hike up, with great views. The route itself was clear of snow, though the big slabs of snow on the east slopes were still pretty thick when seen up close on the walk towards the Tom a' Choinich summit cairn. Looking back down the route taken so far, including Tom a' Choinich's ascent ridge Looking along the route still to take to the summit Looking over to the next destination, Toll Creagach, from TaC's summit

Of the 2 hills, Tom a' Choinich certainly looks the more interesting, looking across to Toll Creagach it appeared to be more of a featureless lump. But it still made for a nice walk ..... the initial descent from Tom a'Choinich is steep and although it looked like there may have been a path bypassing some of the easy scrambling bits, it was under snow. Would have been a shame to take it anyway! Assumed this was a bypass path to avoid any slight scrambling, as it seemed to rejoin further down the steep rocky section - doesn't look it's been used this winter though!

So down to the bealach, then up the slopes opposite. If a path continued here, I lost it completely, but it makes no difference - whether you go over the 951m point or skirt around it, on a clear day like this it's obvious where you're aiming for. Somebody had picked a fine camping spot on the flat area just to the south of the route I took; they'd have some cracking views from their tent I'm sure.

Path or no path, it doesn't take long to suddenly find yourself at the summit with the cairn and trig point a few metres apart. Great views down and over to Loch Mullardoch ... yet more munros added to my list of "seen them and now want to do them!". Distant views were a bit fuzzy with the haze and didn't come out well in photos, but I'm not going to complain about having a warm day!. I then just headed off south down the slopes - having dodgy knees, I appreciate a descent on terrain like this, not too steep and not too hard a surface, it stops the return journey from just being a painful ordeal to endure! I followed the WH advice to aim off to the right of the Beinn Eun to avoid steep slopes beyond, and so the gradient was fine, if a little boggy, and it's straight back down to the boggy section of the outward path and the return to the small dam and the track to the start. Still some construction work being right down near the start of the walk, but it's looking like landscaping/remedial work is the main stuff to do now

So is the construction work still an horrific blight on the landscape? If I'd seen the glen in it's unblemished state first, I'd certainly think so. I do think it'll continue to improve from the worst it was a year or so ago though, and it'll become like numerous other similar tracks in other areas, becoming better bedded in to its surroundings once the construction workers and their equipment have gone. It's already looking better than it appeared from previous reports, so some small glimmer of hope...!

We have been up Tom & Toll a couple of times before the hydro work started so for me, there is no comparison. It used to be such a fab, quiet, wild spot. Not any more. At least the track is slowly blending in, but it will take time to improve the overall state of the glen. That aside, the two Munros are very entertaining, especially Tom. We're thinking about doing them in winter conditions at some point since they are so close to home (just up the road from Beauly

We were nearby on Saturday: Strathfarrar ridge. Great weather, lots of sunshine after the morning mist burned off

I had a look in my old albums and found a snap taken from the very same place where the dam is now: 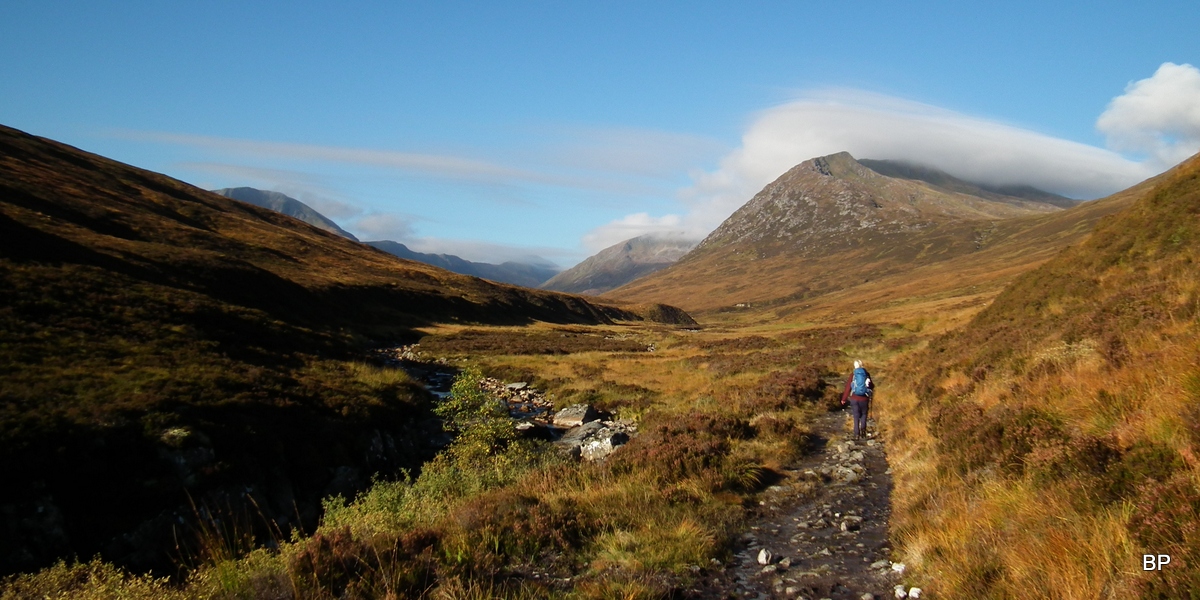 . And yes BP, I can see from your photo why the dam and associated works are so unpopular amongst anyone who saw it in that more natural state first.