This was the start of a week's break when we had originally intended to go North and spend a couple of nights camping in the Deargs. But MWIS had indicated that a front was a bit stuck over the North Highlands and it was likely to be good pretty much everywhere else. So we decided to delay the Deargs for a day and pick off the Carn Mairg group, thinking May was a good time of year for this circuit, avoiding any possible conflict with sporting activities.
I was involved in musical activities on Sunday afternoon so we left Yorkshire on Sunday evening to drive to Dunfermline where there is a travelodge. On Monday morning we found Greggs in Dunfermline for breakfast and thence to Invervar. There were already several cars in the car park and we faffed around a bit with boots and picnics getting away at about 11am.
The route leads through some pretty woodland then into an area which has been clear felled with the remnants of felling scattered across the path; this must have been quite tricky to negotiate immediately after the felling as no attempt seems to have been made to keep the path clear of debris. 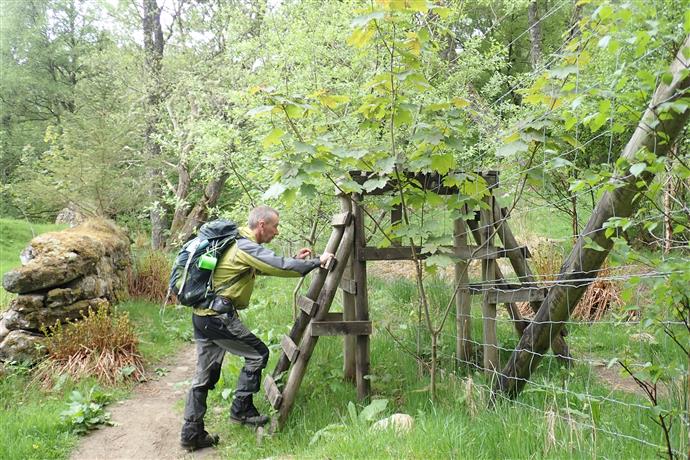 choice of stile or gate maybe we'll go for the gate on the way back??? bit of a scruffy path

Polite notices request that you follow the green and orange poles and as we had no reason to want to go any other route we followed their suggestion.
The route follows a track which leads up towards Carn Gorm to a small hydro dam and then invites you to cross the burn by a rather exciting bridge; I wonder what the legalities of this would be if the bridge broke under a walker. We forgot to fill our water bottles from the burn but were pleased to find a small stream crossing the path a little further up, and then it was a nice steady climb with a few little flatter areas to break it up, reaching the top of Carn Gorm at the same time as a father and son pair who had set off a few minutes before us. We were soon caught up by another pair who passed us and were well ahead in double quick time. An Sgorr in the middle and Meall Garbh on the right looking over to Ben Lawers Me on summit number one Carn Gorm

En route to Meall Garbh we took a wee detour to the intermediate top of An Sgorr which had great views into Glen Lyon. rudolph on An Sgorr looking down Glen Lyon

Rudolph then bounced on ahead and got to the shelter near the top of Meall Garbh about 3 minutes and 47 seconds before me (or thereabouts) where he got the stove on for a brew and lunch. We had leftover cold pizza, which by the time we ate it was more like crumbs, cheese and vegetables mixed in a bag, and a Greggs Belgian Bun which was very sticky. It was very cold and the shelter was not very deep so we were a bit chilly when we got going again. Rudolph on summit no. 2 with its peculiar cairn, Meall Garbh Our hills were clear of cloud but as the afternoon proceeded the cloud was gradually lifting off the Lawers group; here Ben Lawers is still in the cloud but all its friends are now free.

However once moving and out of the wind we warmed up and it was a lovely walk across the tops to Carn Mairg itself. Schiehallion appearing to the north very pretty salmon coloured blobs which looked like the fruiting bodies of a lichen. A google search shows this to be "fairy barf" !! Just short of the summit we found a lovely warm, sheltered spot behind a rock looking over to Schiehallion, where we stopped for a second brew and lunch and a wee rest. interesting bit of mountain architecture near our picnic spot - is it a stile over a now-defunct fence perhaps? Ben Lawers group from the interesting summit of Carn Mairg

We took a steep route off Carn Mairg and it didn't take long from there to the summit of Meall na Aighen with some interesting rocks on the top. cloud coming in over Carn Gorm and Meall Garbh and the Happy Mugs. Mustn't forget them!

From there a path goes to the other top so we went there too before descending down the nose back down to Invervar.. The last bit of the descent was a bit brutal on the knees and we could not really understand why we were asked to descent straight down the ridge rather than following the stalkers' path we could see, but we were not looking for an argument with anyone so we did as requested, again meeting up with the father and son in the car park at about 7pm. three quarters of the way down we cross this stalkers path/track which goes into the corrie to a wee hut. not far to go now, the last bit of descent to Invervar and the view up Glen Lyon - the cloud now come down again over Ben Lawers, but we have had four cloud free munros :-)

From there we set off for Inverness to spend another night in a comfy bed before our planned trip to the Deargs, and were interested (and pleased from our perspective as it showed we had made the right decision,) to hear that it had chucked it down all day in Inverness, and was still dreich and cold when we arrived.

thanks, I'd never seen it before but Google found a picture for ID

. The pink dots were about 2-3 mm across. quite striking on a grey rock when you are watching your feet!

Lovely - never heard of Fairy Barf either, but it's real photogenic

Huff_n_Puff wrote:Lovely - never heard of Fairy Barf either, but it's real photogenic

Oh it's called being obsessional I think! and possibly a bit concerned our legs might give out before we compleat!