Hello everyone! Long time lurker, first time reporter. The wife and I bagged our 10th (Narnain) and 11th (Ime) munros on a scorching (this is the hottest word I have in my vocabulary, if there is a hotter word in yours, please insert here) Bank Holiday Monday. The car temperature at the end read 25 degrees. Hot enough on it's own but as you baggers know, hill climbing temperature and normal temperatures are different beasts. However, we were well prepared with plenty of water (one 2 litre bottle we froze overnight so it melted into glorious ice water along the walk, credit to the Mrs for that one), and light airy clothing, and the cloudless sunny skies made for some spectacular visibility and photographs which has inspired me to write my first report. Hope you enjoy.

Ime and Narnairn turn out to be the last of the Arrochar Alps to be checked off our bagged list, and we have done The Cobbler a couple of times too, so I know the area fairly well. I expected it to be busier than normal, Bank Holiday and all that, but the car park was rammed full when we rocked up at 11.00. I 'parked' at a 50 degree angle on a bit of grass 15 mins later and at 11.15 we were on our way. We were doing the anti-clockwise route, so Narnain first followed by Ime then back via the rocky path adjacent The Cobbler. We found the little steep path diverging to the right just after the Forestry sign and started scrambling our way through. An hour or so later...still scrambling....still steep. It seemed to be like that all the way up but when you start gaining height, the views behind were stunning. 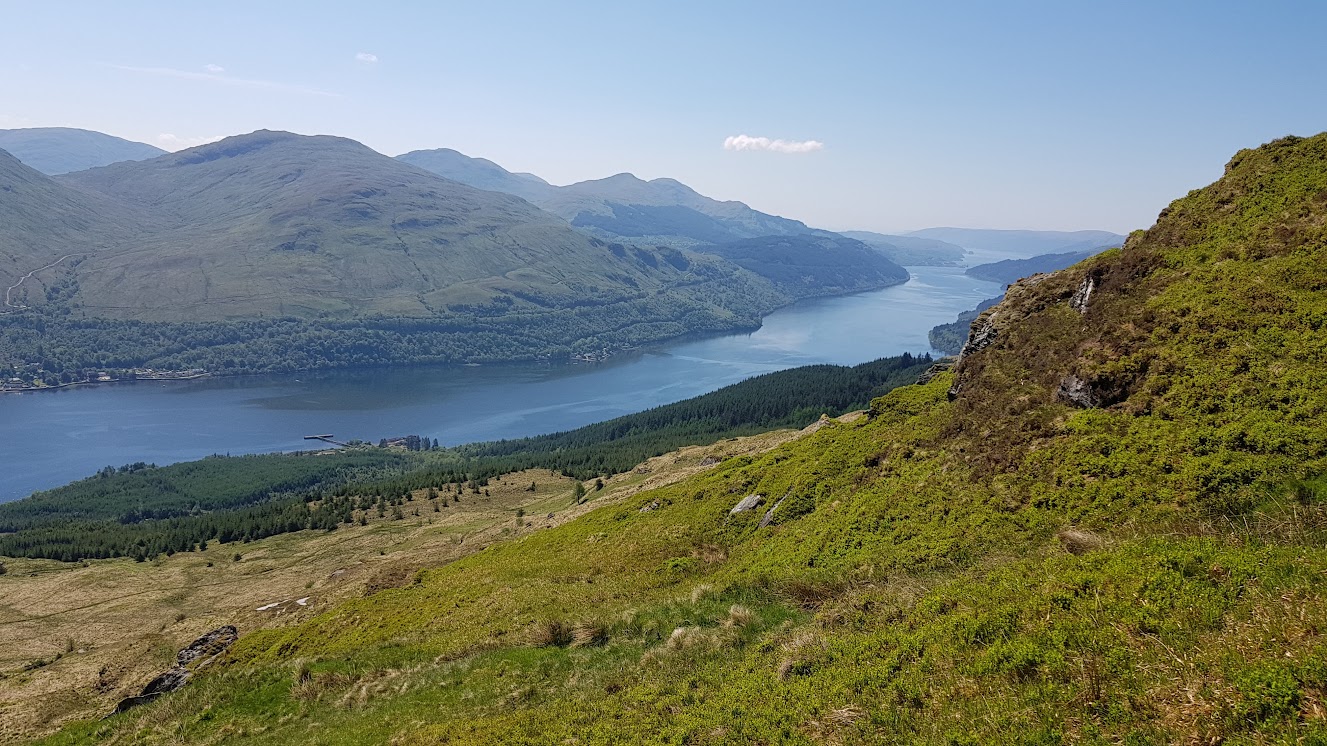 Loch Long viewed on the ascent of Ben Narnain

We charged on (still steep, still scrambling) over the Cruach nam Miseag. Here he is with a bit more of Loch Long visable... 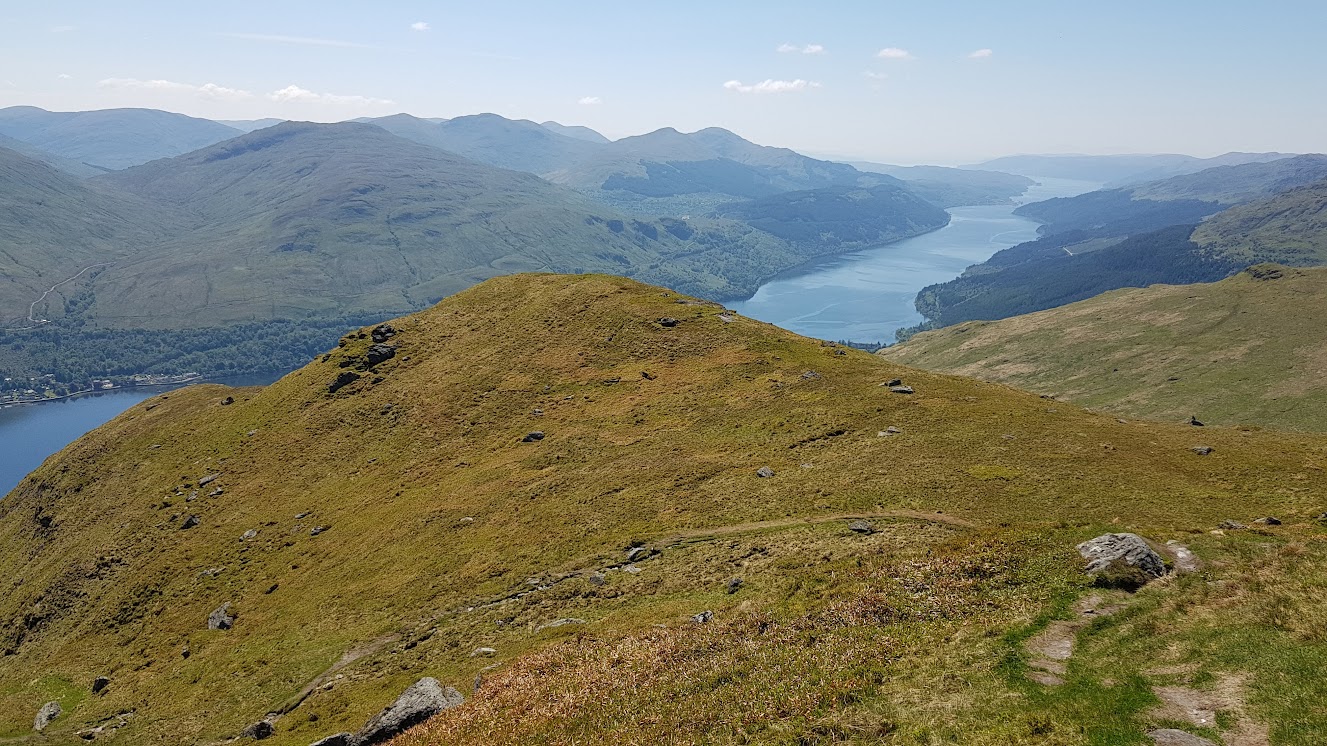 Cruach nam Miseag - on reflection and having looked at the OS this probably isn't right. Confirmation someone?

I'm sure Ben Lomond is probably one of those peaks? Pick the tallest one and assume is my motto!

The heat was really taking it out of us at this point as it truly is a relentless ascent. We stopped for regular short water breaks throughout the hike. But on we went, another shot with the Mrs taking in the scenery. 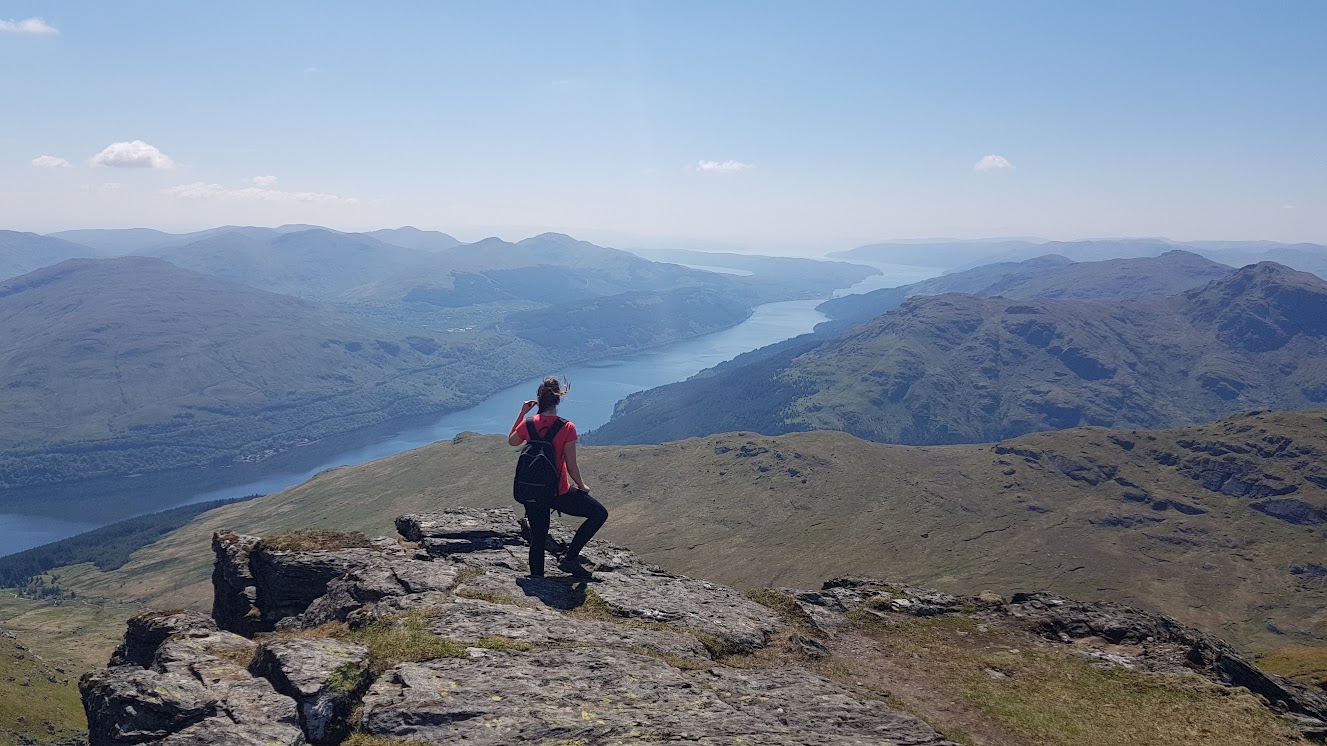 And then finally the summit of Narnain! I always start a stopwatch at the beginning of a munro climb, then hit lap every so often for marker points. But I forgot to do that this time so I can't remember how long it took to get here. It felt like about 8 hours at the time but that can't be right. I like this photo, the trig point on the top of Narnain with The Cobbler on the left and Ben Ime on the right. 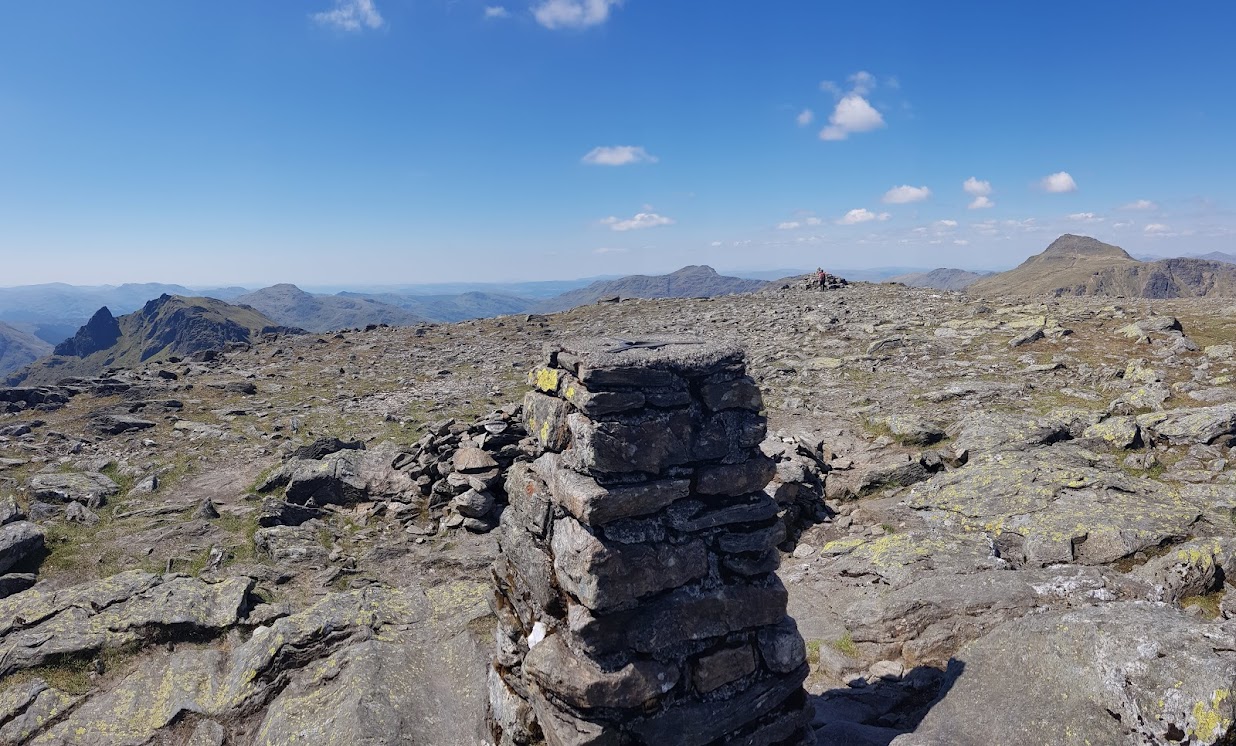 The Cobbler and Ben Ime from the summit of Ben Narnain

And one closer up of The Cobbler itself. If you zoom in you can actually see the shafts of daylight coming through the needle at the top! We saw the rescue helicopter landing on this on the way back round. It really was a hellish hot kinda day for this carry on, but we saw so many people hiking without a backpack, without any equipment at all and so presumably without any water? It's no wonder the helicopter earns its wages on days like this. 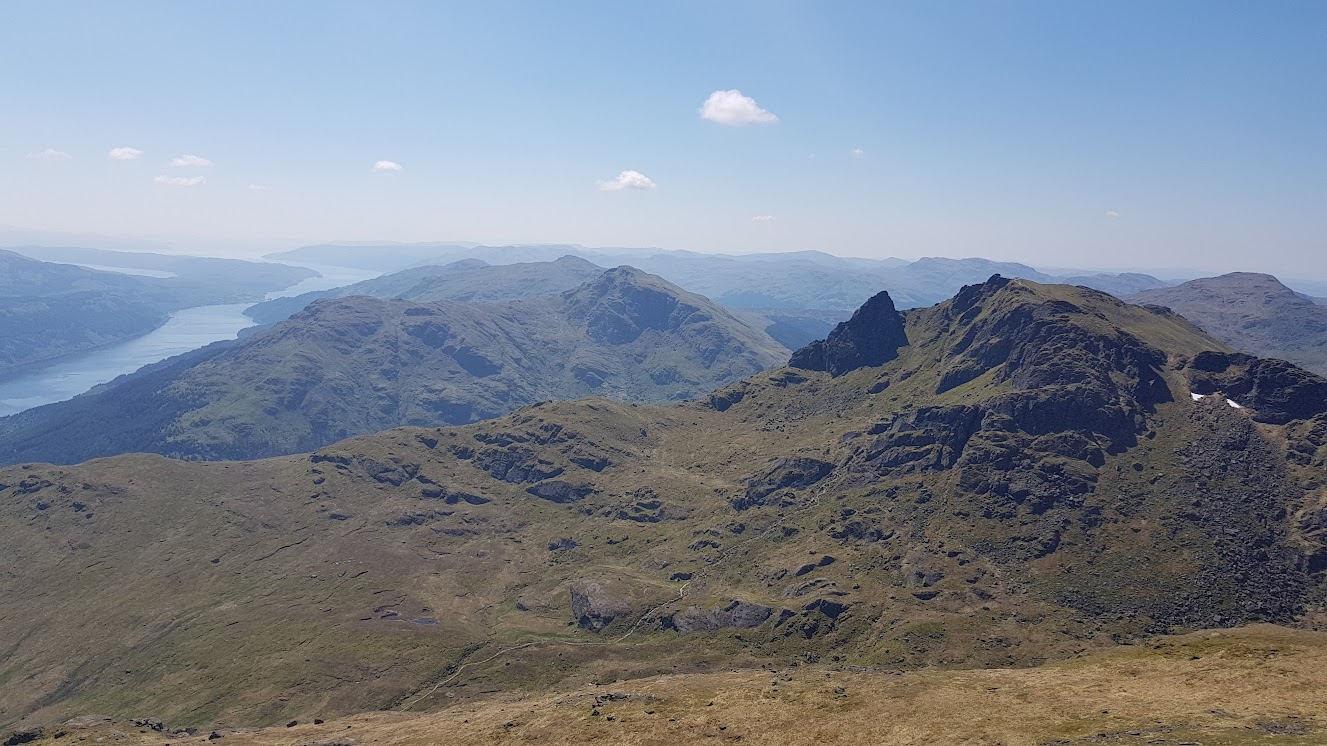 So finally a bit of flat to walk on and the Narnain descent. Pretty featureless to be honest but a welcome respite until we hit the more defined path and then onwards to Ben Ime. It's a non-circular route so we just forged on up the path, seemed a much gentler ascent this time but again, the relentless heat meant regular stops. Eventually, we arrive at the summit and how lovely it was. Here is one that is the reverse of earlier, the freshly conquered Ben Narnain on the left, The Cobbler on the right. 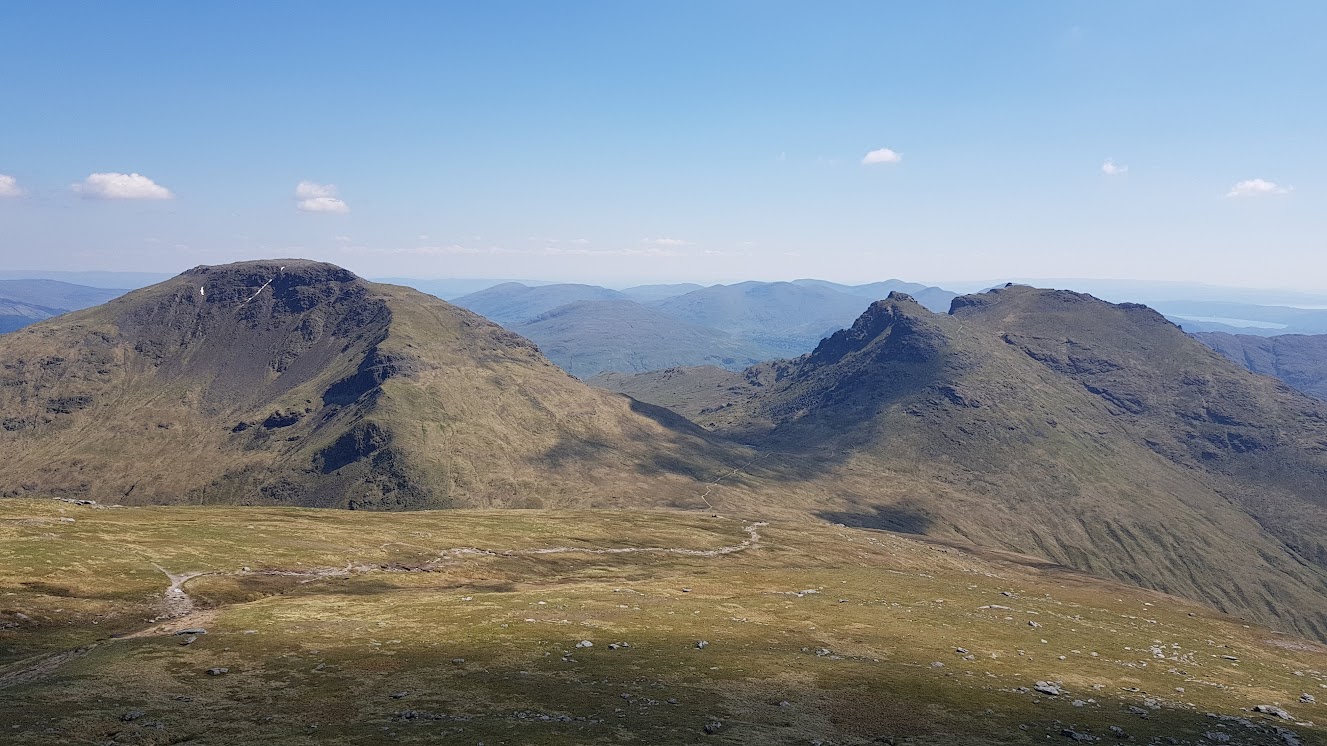 Ben Narnain and The Cobbler

We took a well earned 20 minute lunch break up here, and a great spot it was for it too.

After this is was a fair 2 hour hike along the well defined path adjacent The Cobbler. A very pleasant stroll compared so some of the earlier work, but eventually the rock strewn path takes its toll on your feet. I detest the stupid, seemingly never ending zig zaggy path at the beginning/end of this walk at the forest. By the time we navigated that we were looking forward to icing our feet in the Loch, but the tide had swept our hopes, and the water away. So, back in the car at 17.00 on the button for a total of around 6 hours walking, and off home. Won't say too much about the A82 roadworks and accident at Dumbarton that turned a 1 hour drive home into a 3.5 hour one, because again I fear my vocabulary won't fully justify my emotions, but suffice to say it was....bad.

All in all though, a braw day and a great way to tick off our 11th munro. On to the next!