I was visiting relatives in Oban and the weather forecast for Sunday was so good I just have to get out on the hills. Fort William and Ben Nevis via the CMD Arete had been on my to do on a clear day list for a while, so I got up at silly O'clock and headed for the Ben.

I've been to Fort William many times, but I've never ventured out onto Ben Nevis before. There's a story behind why.
As a teenager I joined a hill walking club. I've great memories of being dropped off in Cathcart in Glasgow and being picked up by folk from the club to head out on the hills. There were three guys who were on most of the trips I did; Ben Narnain, a snowy Stuc a'Chroin and Ben Vorlich near Loch earn, and a wonderful weekend on Sky going up Am Basteir stick in the memory.

The club had organised a walk in January or February up Ben Nevis and I wanted to go. Unfortunately, our car got stolen from King Street car park in Glasgow and my ice axe was in the boot. This meant I could not got on this walk. There were four people from the club who did. One guy was did not feel well on the day of the walk so stayed in the youth hostel. The weather was not great on the day of the walk, so one of the three who headed off headed back before the summit was reached. It is believed that the two others made it to the summit, but when descending they crossed the snow at an angle triggering an avalanche that buried them under 11 tonne of snow. If my ice axe had not been stolen, would I have gone on that trip ...most probably. Would I have turned back down the hill with Rab or continued with the other two to the summit? I've asked myself that question lots of times and I know that I'd have gone on and I too would have ended up buried by an avalanche.

I'm not sure I will ever go up the Ben in winter, but on a sunny day in May it was time (30 years or so have elapsed) to banish some ghosts.

I arrived at the North Face car park around 6:30am to find it almost full! I think many people have come up the night before and camped. After exchanging some pleasantries with the guy sorting out his climbing ropes etc., next to me I set off the path that runs beside the Allt a'Mhuilinn to the CIC hut. 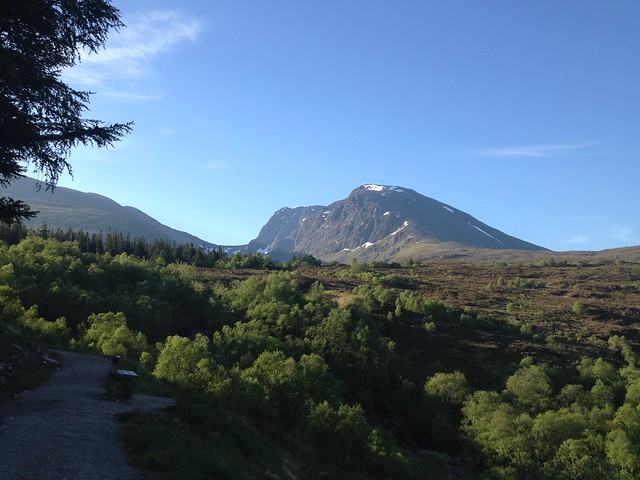 It did not take very long to get clear to the trees and see the North Face in its grandeur. 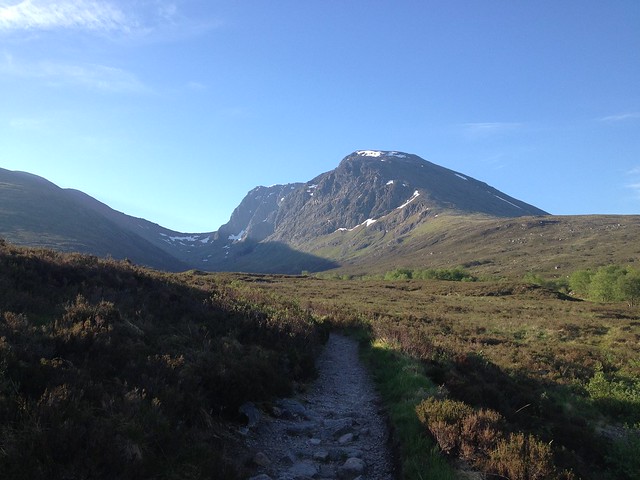 Despite the busy car park the path ahead was clear and it felt like I'd the whole hill to myself. 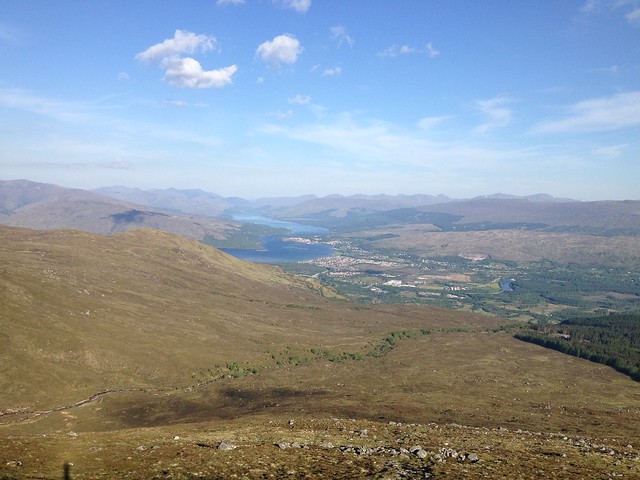 I left the well fromed CIC path behind and started to cut up the flank of Carn Beag Dearg towards Carn Dearg Meahonach. Despite the very dry weather we have had the ground here was still boggy. 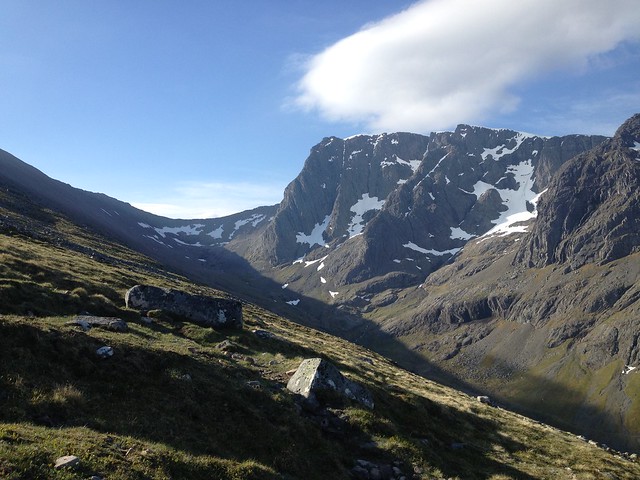 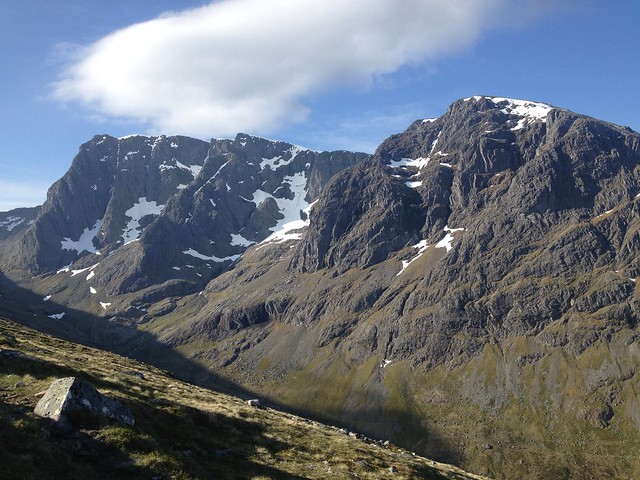 It was hard while walking along not to be absolutely hypnotised by the clifs and gullies of Ben Nevis opposite.


After a while the summit of Carn Mor Dearg started to come into view. I think Carn Mor Dearg means 'the big red hill' and the red granite rocks mean it is well named. 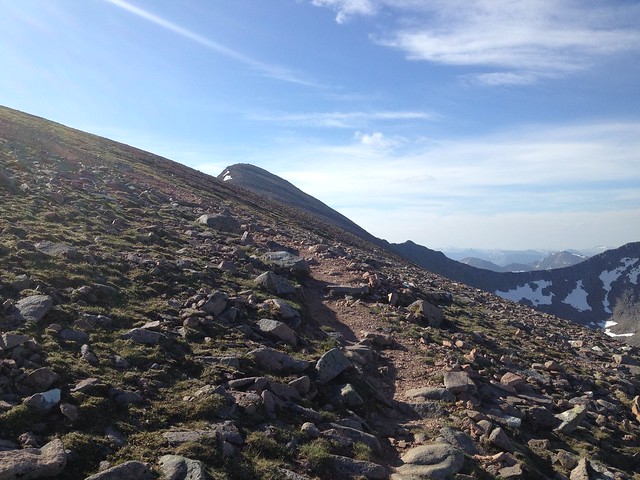 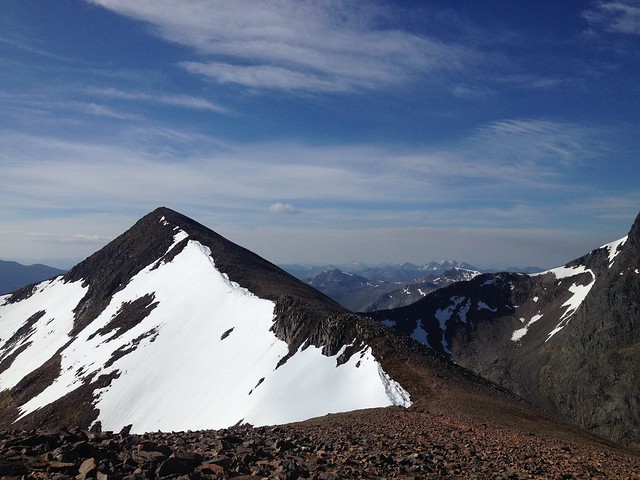 (The view from Carn Dearg Meadhonach to CMD, with the arete beyond).

The photographs make the weather look blissful and in one sense it was. However, the wind was fair blowing. I had 20 mins before met three younger walkers who had headed up to the summit of CMD and given the wind decided to head back down the hill rather than cross the ridge.

I decided to head on and soon reached the cairn marking the summit of CMD. 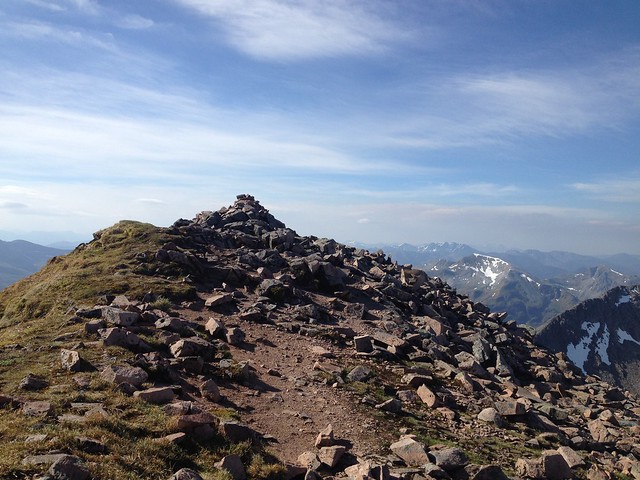 The arete was broader than what I thought it would be. I'd gone over Crib Goch in Snowdonia a couple of years ago with one of my boys and this did not look as exposed or as narrow as that. So despite the tricky wind I ventured on. 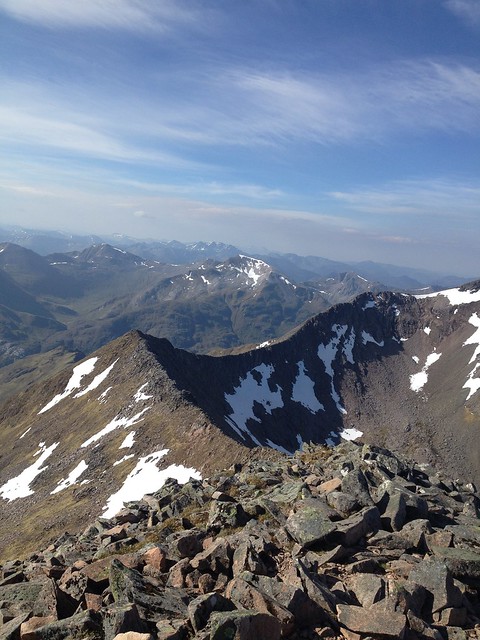 Part of the way along the ridge I met a guy coming the oppostite direction. He'd camped at the CIC hut and gone up the ben via observatory gully and said it had been pretty sketcy given the wind. 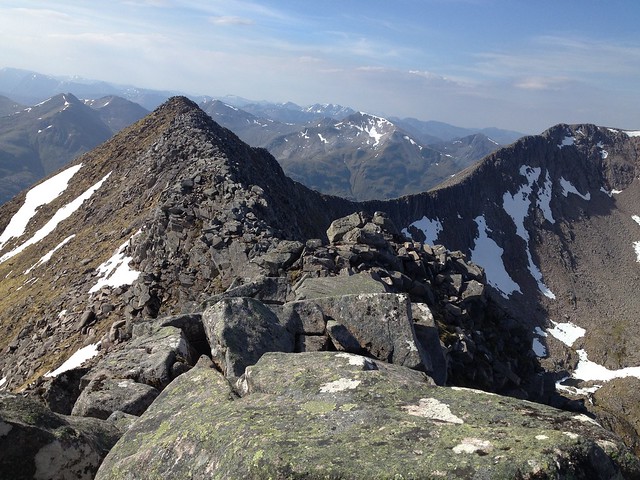 I absolutely loved scrambling over the rocks. On many occasions I was on all fours holding on against the wind, but there are no prises for atristic merit, and I was just happy to be havign fun and enjoying the suroundings.


The wind was noisey but I could also hear something else. Next thing I knew the Coastguard helecopter was buzzing around the face of the mountain. 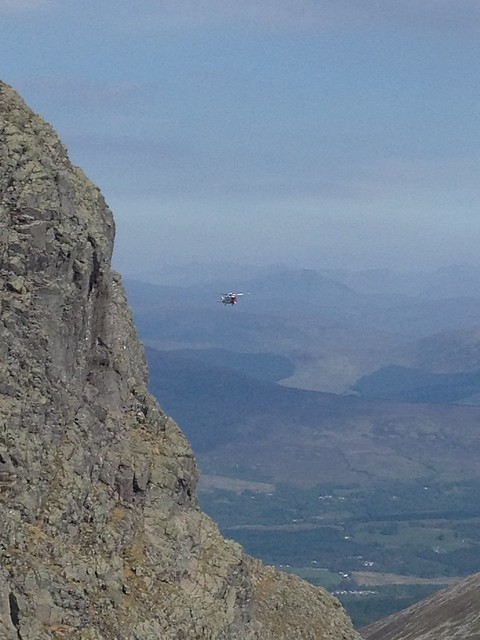 It is a big helicopter, but the scale of the north face makes it look like a toy drone. I was not longer worried about being blown off and I was amazed at the skill of the piolit not to be blown into the face of the mountain. These are seriously skillful guys.

I was a little sad to reach the large cairn that marks the end of the ridge. 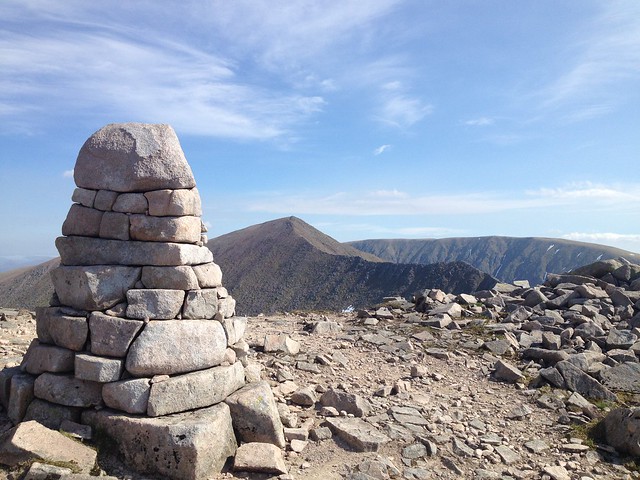 The climb from the cairn to the summit is steep and I lost the path (if there is one) which meant losts of scrambling which was way more fun anyway. 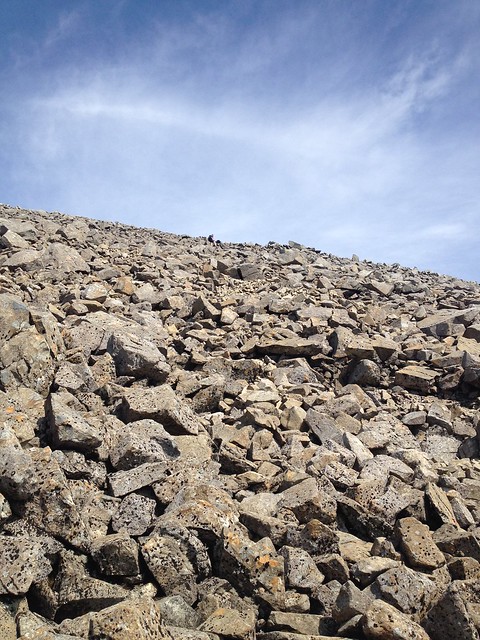 (There was a group of three young walkers ahead of me which you can see just at the top of the photo). 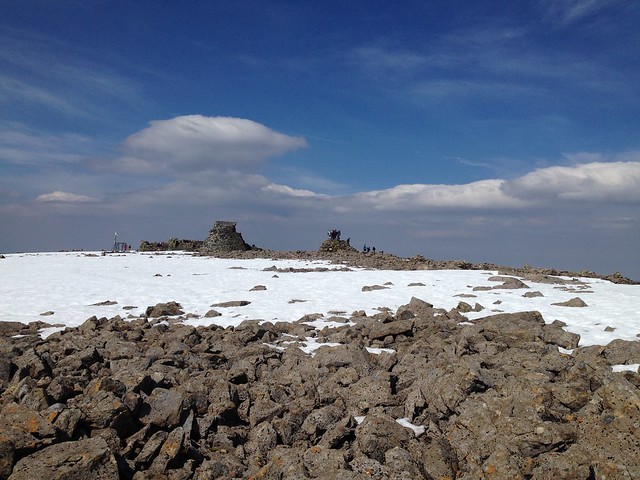 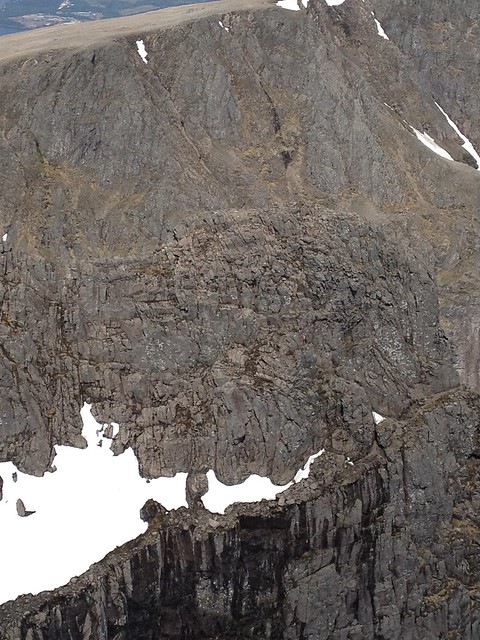 (There are two people in this photo, can you spot them?)

The summit is not an attrractive sight. I decided not to hand about the crowds and head down the tourist track till it cuts off toward the lochan. 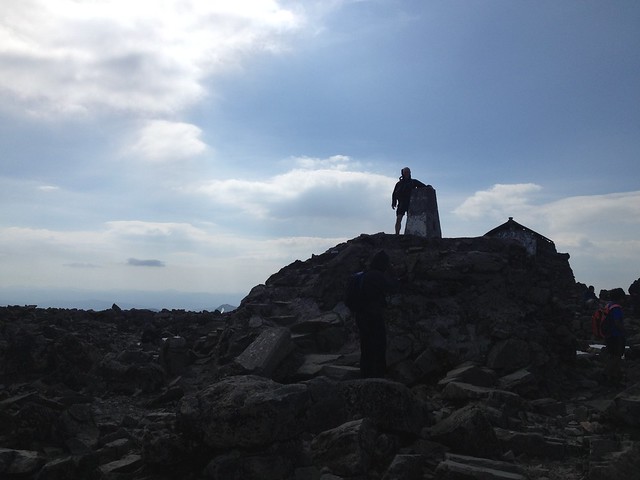 At least with lost of people about there was someone to ask to if they could take my photo!

The route down was just a mass of people. The hill on this side lacked any of the asthetic grandure of the north face, so I kept my phone in my pocket and sped down the hill.


Once I was off the tourist path on the path that takes you to the head of the lochan I was on my own again which was nice. The path ends at the head of the lochan but its reasonably obvoious where to head to get back to the Allt a'Mhuilinn and back onto the CIC path to the car park. The snow melt meant that the river still had a reasonable depth to it, so even finding some standing stones to cross on the water came over the top of one of my boots. This was not too bad given I was nearly back at the car and it was a warm day.


It was a grand day out, windy but with fantastic clear views. Who knows, now I've banished the ghosts from the past I may even venture up one day in the snow. 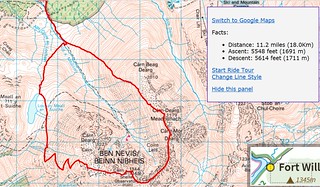