Another Bearsden Choirboys' outing this one

: at the interval of one of our rehearsals in early February this year, Malcolm had mooted the idea of booking up the remote Alltbeithe Youth Hostel in Glen Affric for three nights sometime in May, with the aim of making an attempt on that remote group of three Munros that can only realistically be bagged via the Youth Hostel, namely Sgurr nan Ceathreamhnan, Mullach nan Dheiragain and An Socach. The hope was that the 3-day stay would also allow us to get some Munros done in the vicinity on Day 2, and if weather and energy allowed, maybe even bag a few more on Day 3 after walking back out to relative civilisation. As ever, optimisim triumphed over experience as we all immediately had visions of bagging multiple remote summits in the West of Scotland in glorious sunshine

... After some discussion over dates, and a rapid realisation that the Alltbeithe Youth Hostel was already solidly booked over Friday and Saturday nights for most of the summer, Annual Leave was duly arranged for a few days in late May, and Malcolm, Tom and myself booked ourselves in to the Youth Hostel from Sunday 20th May to Tuesday 22nd May inclusive.
Needless to say with anything that is booked up that long in advance, the period of Sunday 20th to Tuesday 22nd May inevitably then turned out to be a small island of utterly miserable weather in the middle of what was otherwise a solid fortnight of unbroken sunshine

! In the event, however, it didn't really prove to be quite as bad as its rep: even with our heavy backpacks on, the walk in through the quagmire of An Caorann Mhor proved to be only moderately awful, and it only took us two and a half hours. Bits of it were even mildly scenic, particularly the final approach to the very atmospheric Youth Hostel, looking very welcoming in the middle of this watery wilderness with its cheery orange roof: Hannah, the Warden, couldn't have been more welcoming, and soon enough we were gathered at a table in the kitchen consulting the map and evolving a plan of campaign. We'd initially considered having a go at the ring of four (or mabye five) Munros to the south-west on the Monday, starting with Mullach Fraoch-Choire, then A'Chralaig, then heading east along the ridge to Sgurr nan Conbhairean et cetera, but it wasn't clear whether the weather was going to be bad on just Monday or on both Monday and Tuesday, and Hannah advised that the round of three Munros to the north (Sgurr nan Ceathreamhnan and pals) was navigationally easier in the Clag. That would also have the advantage of hopefully ensuring that we at least got these three remote ones in the bag in case we ran out of energy or got even worse weather on the Tuesday. A good decision in retrospect, since Tuesday's weather was truly atrocious

!
So, off we set on the Monday morning on the well-engineered path from Alltbeithe towards the Coire na Cloiche bealach between An Socach and Sgurr nan Ceathreamhnan.

our_route.gpx Open full screen  NB: Walkhighlands is not responsible for the accuracy of gpx files in users posts
As per forecast, it was already raining as we set off, and there was a luxuriously thick and velvety wet blanket of Clag sitting right down around the 300 metres mark 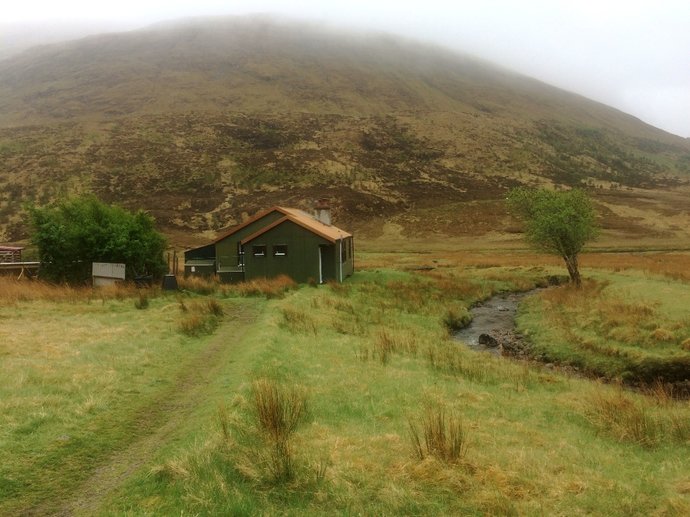 We headed up northwards initially on the path, quickly turning to the east to cross two burns, firstly the Allt Beithe Min and then the Allt na Faing. From the far side of the Allt Beithe Min, the wet blanket of Clag was looking even thicker than it had looked from the hostel 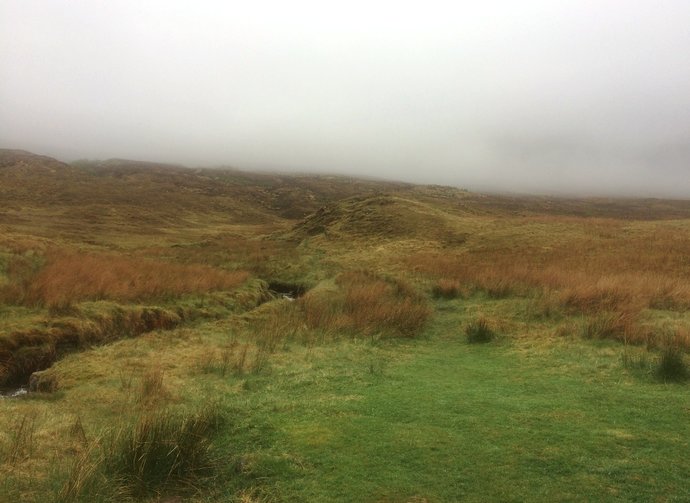 As we approached the Allt na Faing ("Burn of the Sheepfold" I think), we passed some ruins (eponymous sheepfold or old steading??) doing their level best to look atmospheric: A hazy view westwards towards the end of Bein Fhada's long east ridge, just visible through the Clag, from the far side of the Allt na Faing: Undaunted, we turned to the left and headed north uphill into the Clag. My partners in crime could even still manage a bit of a forced smile: 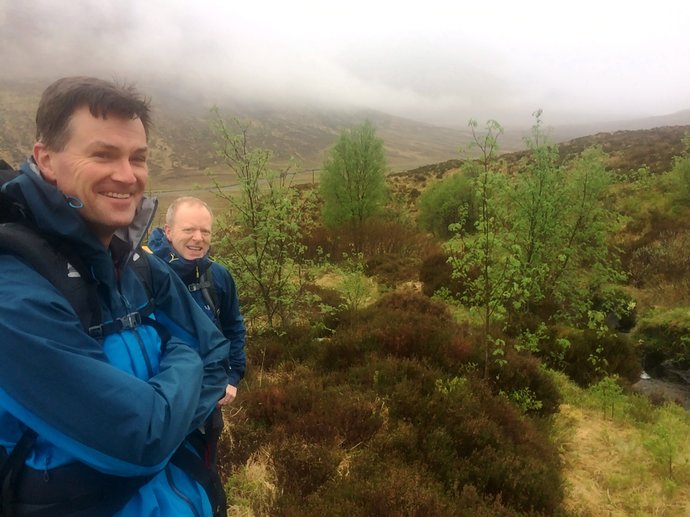 Shortly after this, we were deep in the clutches of the Clag, which needless to say was just as deep and velvety as it had looked from below

. This wee waterfall on the Allt na Faing was about the last "scenery" that we saw for quite some time 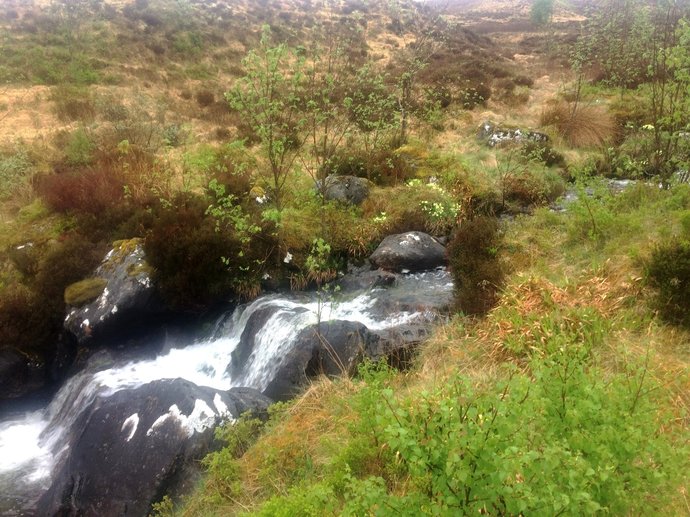 Given the weather, we'd decided to go for the furthest-away Munro first to make sure that we got it bagged, so the very remote Mullach nan Dheiragain would be our first target, as per the website's Route Description. We made it up the the bealach surprisingly quickly (well, it surprised me, anyway

!) and turned left to head west uphill for a few hundred metres to ensure that we'd safely passed the steep bit to the north on the first bit of ridge, then (at the second of two small cairns) we turned off on a faint and intermittent side path to make a downhill slanting traverse westwards into the Coire nan Dearcag to cut the corner past Sgurr nan Ceathreamhnan and gain its long north-east ridge heading out towards the distant Mullach nan Dheiragain. To my surprise, the navigation proved to be spot-on despite the Clag (Tom can take most of the credit for that, I think

) and soon enough we were up at the Bealach nan Daoine, ready to turn right along the long, undulating ridge towards the far-off Mullach.
Said ridge proved to be truly never-ending in the Clag, and it certainly had its ups and downs as it crossed one large Hump (named on the map as Carn na Con Dhu, "Cairn of the Black Dog"; this reminded me somewhat of Winston Churchill's name for his attacks of clinical depression, "Black Dog Days"

!) and then a series of smaller unnamed Humps.The weather was just getting worse and worse, and we were all completely soaked through to our underpants by now, despite all the waterproof gear we could muster, if that isn't TMI

. Mullach nan Dheiragain's resonant Gaelic name apparently means "Summit of the Kestrel" but inevitably it seems to have acquired various nicknames, perhaps most commonly "Mullach nan Jerrycan", which is roughly how it is pronounced (I think). To me, however, it will now always be either Mullach nan Dreich or Mullach nan Drenched-again

...
Anyway, we eventually did reach the poor thing's godforsaken summit cairn, where we all settled down to eat our lunch as quickly as we could - the weather didn't exactly encourage loitering! 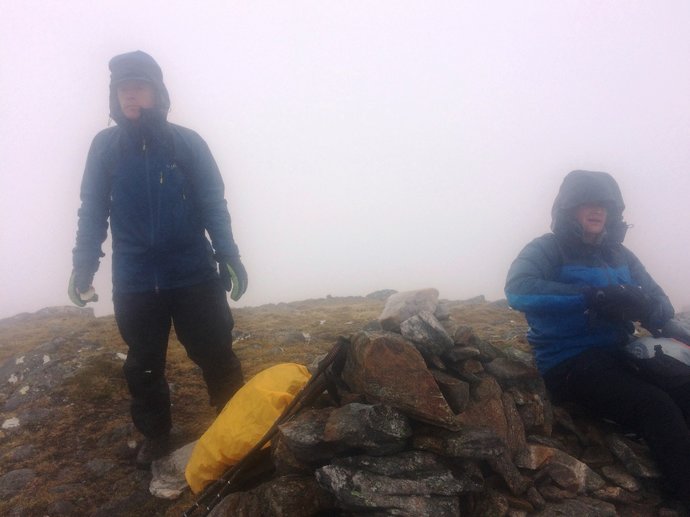 I think Malcolm's hand gesture here is meant to convey that we'd just bagged the first Munro of the day, but alternatively he could well have been advocating a suicidal leap eastwards into Gleann a' Challich to escape the driving sleet 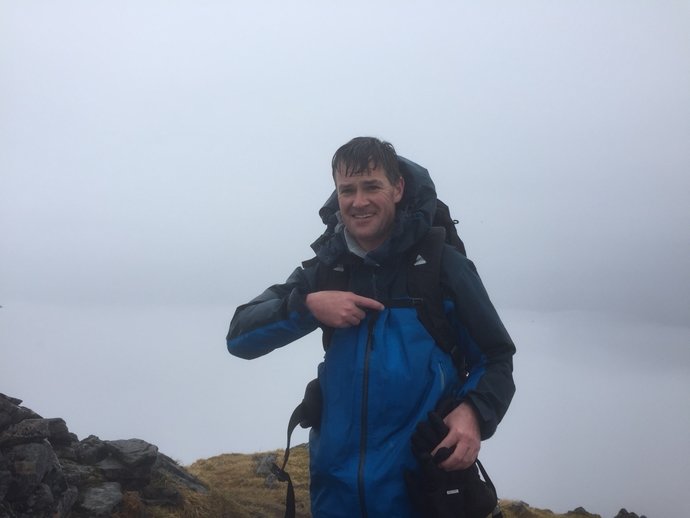 We quickly gathered our gear together again and set off back southwards along that long, long, looong undulating ridge. Around this point, we heard the screeching of a bird of prey of some sort: perhaps it was the Mullach's poor waterlogged Kestrel, although our money was on it being a buzzard. Needless to say, we didn't actually glimpse the bird in question through the Clag...
The ridge wasn't actually as bad on the way back as it had been on the way out: the wind was mostly at our back now, which definitely helped, plus psychologically we were heading back towards (relative) civilisation. Soon enough we found ourselves ascending Sgurr nan Ceathreamhnan's north ridge. Even in the worst of weather, Sgurr nan Chrysanthemum is definitely one majestic mountain: this was more like the thing

! As we neared the summit, a rather amazing thing even happened: we found ourselves ABOVE the Clag, with the final fifty metres or so of Chrysanthemum's summit poking through the cloud

! In theory this should have given us a spectacular Cloud Inversion, and it was indeed rather pretty, but given that Sgurr nan Chrysanthemum is the highest summit for miles around and that it was only JUST above the Clag, the reality was a panoramic view over the top of a thick blanket of Clag several hundred metres deep, which WAS surprisingly pretty but didn't photograph well

. Ah well, at least we have the memories!
Me at Sgurr nan Chrysanthemum summit, looking decidedly chuffed to be there: 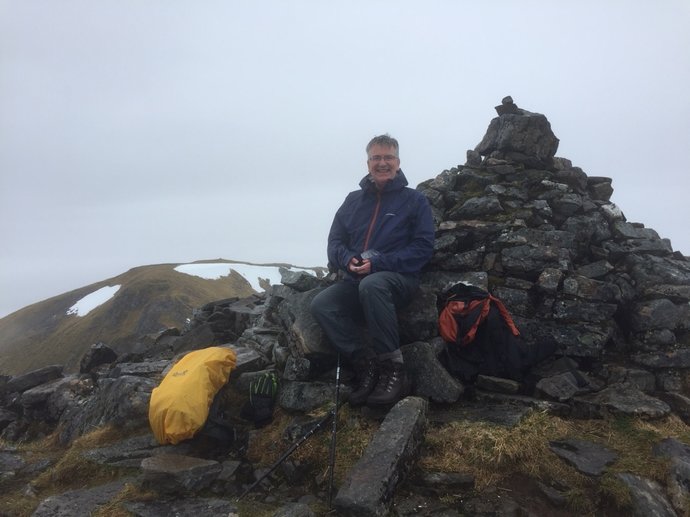 All three of us on top of the Sgurr: We still had one more Munro to get bagged, however, so we headed off down the Sgurr's south-east ridge towards An Socach. I had foolishly voiced the opinion that the third Munro should be "a bit of a doddle", given that it is the lowest of the three and in theory involves only minimal re-ascent ... The reality, however, is that the Chrysanthemum's long, undulating south-east ridge proved to be no fun at all in the steadily worsening weather (I wouldn't have believed it possible, but yes, it did actually get slightly worse as the day went on

). It was a huge relief to reach An Socach's small but perfectly formed summit cairn at last

!
A picture of all three of us at An Socach's summit (although sadly Malcolm may have been in need of resuscitation at this point 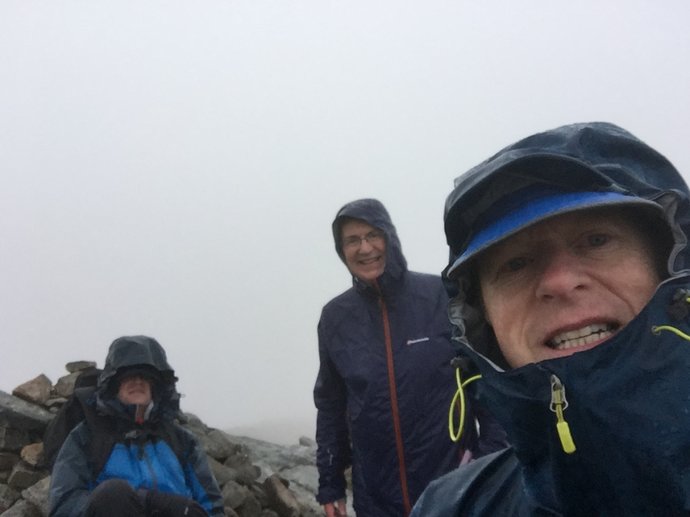 Malcolm somewhat revived and even managing a smile! (I think his hand gesture is again intended to signify that we now had all three Munros in the bag, but again there is the possible alternative explanation that he was merely demonstrating the ravages of frostbite 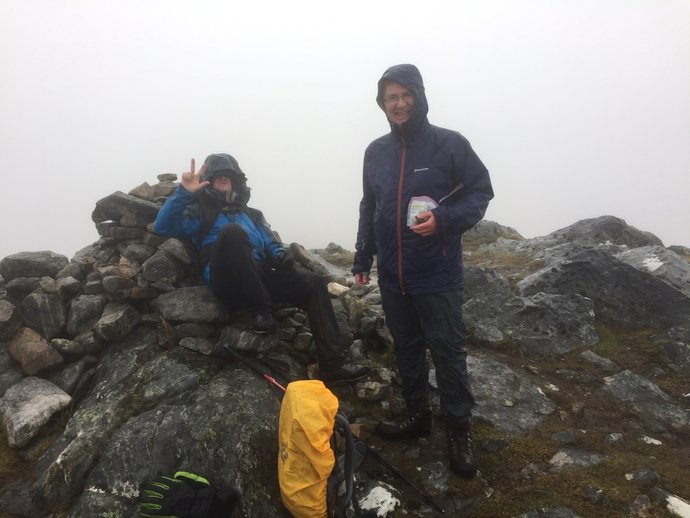 We rapidly headed back off westwards along the ridge to the Coire na Cloiche bealach, where we picked up the end of the descent path back down to Alltbeithe. It was an enormous relief to find ourselves back at the coal-burning stove in the Youth Hostel kitchen, gradually warming up and drying out

!
I was somewhat surprised to find that we'd managed the round in a fairly respectable ten hours: I suppose the weather encouraged us to maintain a "steady" pace

! It had proven to be a grand outing despite the weather, to be honest: three good remote hills to get ticked off, and although the other two summits are rather nondescript, Sgurr nan Ceathreamhnan is truly majestic in any weather!

That was fun! I'm so glad we changed our plans that day and went to Carn Mairg but we had similarly awful weather on these 3.