Stuc a Chroin and Beinn Each

Stuc a Chroin and Beinn Each


When Ken and I climbed Ben Vorlich in February 1987 in the snow, we decided not to attempt to go on to Stuc a Chroin. We had read that it involved scrambling and steep drops and we were concerned that we wouldn’t be able to manage it in icy/snowy conditions. We then climbed Ben Lawers/Beinn Ghlas and Ben More/Stob Binnein by mid March 1987 all in the snow but since then, for various reasons mainly involving girlfriends, fiancées, wives, kids, houses, jobs etc, we haven’t climbed another hill together.

So, nearly 24 years later and somewhat incredibly now living only a stone’s throw away from each other, we decided to go for Stuc a Chroin (this time, though, it was more like a late autumn day with no snow whatsoever). We had read various reports of possible routes and decided that we would approach from Loch Lubnaig traversing the Corbett Beinn Each en route to Stuc a Chroin. This route looked possibly more interesting and less boggy than walking down Glen Ample as well as offering a partial circuit.

On the first day of winter we left Glasgow early and headed up to Loch Lubnaig where we parked in the long lay-by on the south bound side of the road at Ardchollarie More. Boots on, many layers on, gloves on, hats on, hot flasks in rucksacks (we’re feeling the cold a lot more now than a quarter of a century ago

) we set off up the track beside the farm. It may have been the first day of winter but sheltered in the glen it was a lot warmer and we were soon shedding layers.

The track up through the woods was easy to follow if a bit steep and wet with loose rocks and stones in places. We were soon out the woods and heading along the good track which leads up Glen Ample with some nice views back down to Loch Lubnaig. The autumnal colours of the leaves were impressive in the early morning sunlight. At around 590150 there’s a track off to the west which heads up Beinn Each – we took the first track just before the stream which meant crossing the stream a bit further up the hill. As we found later on the way back, there’s a sign post pointing up to Beinn Each just after the stream leading to another track (which we had joined further up) so best to stay on the main path first until you get to the signpost.

We had driven up through mist and fog which cleared towards our parking spot – but looking back we could see there was still a lot of low mist in the glens to the south. Unfortunately I didn’t notice that my camera lens had steamed up so some of the earlier photos have a somewhat unintentional “soft focus” effect. 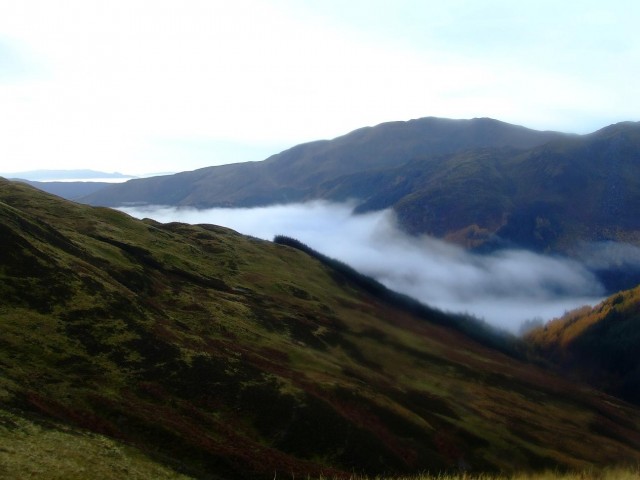 As we headed up the track and gained more height we also had views of the hills over towards Stob Binnein and Beinn Tulaichean to the NW.

Loch Lubnaig below was like glass and we got a good view up Glen Ample with the trees on both sides. 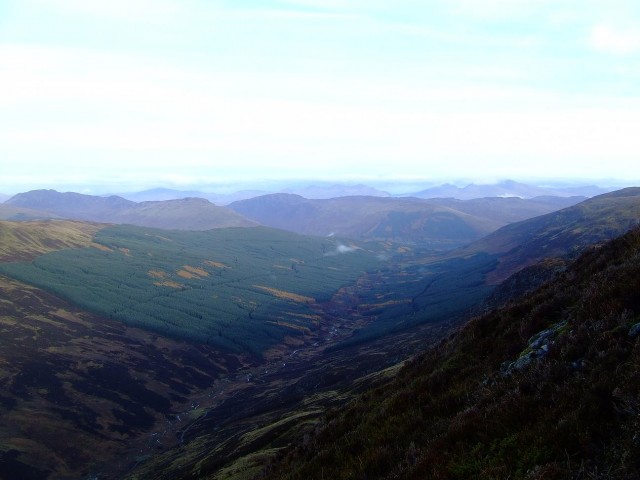 It’s a straightforward walk up Beinn Each - the track was good and we were sheltered from what little wind there was that day. The mist lingered in the glens below, the sun was out, the sky was blue and, for the first day of winter, the conditions couldn’t have been better.

On reaching the top of Beinn Each we found a tiny cairn and got our first view of Stuc a Chroin which had been hidden so far. It looked impressive with the lochan sitting to the south of the summit. There were good views all round and we could see the mist lingering back down Glen Ample and further to the south. And yet another panorama (more to come) this time of Stuc a Chroin...

Although our track suggested we head NE then sharply NW from the summit to go along the Bealach nan Cabar, the NW top of Beinn Each looked particularly steep from our angle. Accordingly, we headed firstly towards the east as we descended from the summit then, as we got further down we turned northerly towards the 735m top. The slopes were grassy, a bit boggy but fairly easy underfoot – we spotted a hare and a fox on the way but couldn’t get the camera out fast enough. Lower down in Gleann a Chroin we could see large numbers of deer heading off up the hill on the far side. Our revised route meant that we didn’t go over the 735m top but instead headed NE when we got to just below it. Looking back, we reckon that we could have come down the northerly side of Beinn Each and over the bealach after all – on the down side we ended up dropping down lower than we had to but on the plus side we saw the deer which we would probably have missed. We could also see down Gleann a Chroin from this point. We rejoined the main track as it started to get steep at around 602177. Looking back more to the west we could see the hills to the north of Loch Lomond leading up to Crianlarich and Stob Binnein.

Slightly further up we got to a point where we had a choice of what looked like an easier, longer route slightly more to the north and then east up towards the top or the more scrambly direct route. We opted for the more scrambly direct route which turned out to be straightforward as there was a track to follow up. A little scrambling was needed but nowhere near as much as we’d thought. As is often the case on the Perthshire hills, there was a line of old rusty fenceposts which can be followed if the weather gets bad. Quite a few of these had rusted off leaving short stumps sticking up - which could be very dangerous should anyone trip and fall on them. From then on we kept on the track up to the top spotting two ptarmigans on the way but could only get a picture of one before they disappeared over the ridge; reminder to me to keep the camera more handy. Just as we got to the top, two other walkers were leaving in the distance, the fist people we had seen all day. We headed over to the summit cairn and said hello to a third walker sitting on the cairn – he completely ignored us and it meant we had to wait until he had left to get a picture of the cairn – and we were only trying to be friendly.

We took the usual few photos and then sat down just south of the cairn to have an early lunch. 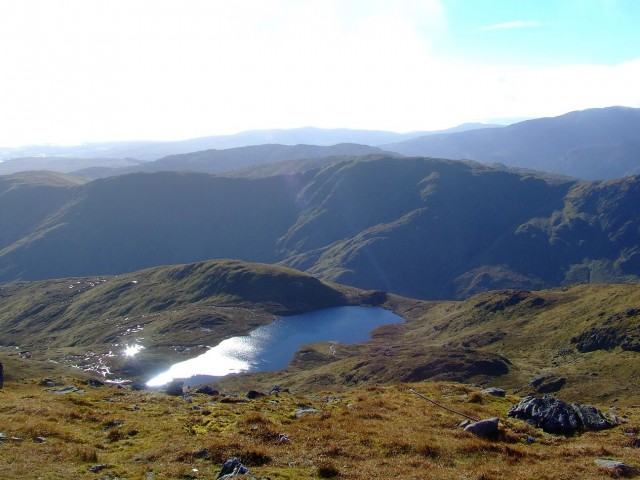 We had good views to the south and east and could see as far as the Wallace Monument while having a good discussion about other points on the horizon – don’t think we came to any conclusions though. With some cloud approaching and the possibility of rain, we packed up and started to head off after taking some photos of the now vacant summit cairn.

We had decided to follow the circuitous route which initially heads north from the summit before going NW just down from the crags above the start of Allt Choire Fhuadaraich then W round Coire Chroisg. On the way down we had good views of the hills to the NW and saw more deer further back on the ridge – still far away but we did manage to get a picture of two stags. We then made the mistake we knew we were supposed to avoid. There was no track down the hillside but the going was easy over soft moorland and heather. We had then been following the Allt Coire Chroisg but the mistake we made was in staying on its north bank down into the trees where we met the deer fence – we should have crossed the stream before the trees and headed south round the forest. There’s a gap in the fence under which the stream runs so we were able to get down into the gap in the trees and from there we followed to the end of a track then down along a stream to get to the main Glen Ample path. It’s then a straightforward walk back down to the car.

A very enjoyable walk and the weather stayed fine and dry all day – brought back the memories.

Some lovely colours in your photos, and a bit of a twist on the usual Ben Vorlich/Stuc a Chroin route. Although I've done those two a few times over the years, I only went up Beinn Each for the first time this year. I hadn't appreciated how popular it was. Enjoyed it, particuarly the ridge between it and the Stuc. Good effort on the ptarmigan. Funnily enough the only time I've managed to get a shot of one was on Stuc a Chroin - sadly it was very well camoflaged, so it was a rubbish photo