This was Day 3 of our grand choir outing to Glen Affric, based at Alltbeithe Youth Hostel. After two very wet days of walking, the forecast was looking much more promising for Wednesday 23rd May, so phone alarms were duly set for 05:30 a.m., we hauled ourselves out of bed, finished off Malcolm's tinned peaches and Ambrosia custard (less weight to lug out; well, less weight in our backpacks anyway

!) and we set off nice and early for the long and boggy walk back out through the An Caorann Mor with our backpacks. The Grand Plan was to walk back out to Cluanie on the A87 where we had left two cars (Malcolm's and mine), then leave one car at the big Glen Shiel car park and the other one at the eastern edge of the forestry directly south of Aonach Meadhoin, so that we could make an attempt on the Brothers Ridge before dinner at the Cluanie followed by the long drive back to Glasgow.

our_route.gpx Open full screen  NB: Walkhighlands is not responsible for the accuracy of gpx files in users posts
Amazingly enough, it all worked out pretty well. Although it was still a bit overcast when we set off from Alltbeithe, the cloud lifted gradually while we sampled the delights of the 10,000 metres freestyle through An Caorann Mor's bogfest, and by the time Loch Cluanie came into view, the South Shiel Ridge had almost emerged from the Clag: Needless to say, it was quite a relief to get the heavy backpacks off and dump most of our stuff in the two cars

... The jiggery-pokery with the cars didn't take us that long, and by 10:30 a.m. all three of us were duly assembled at the big Glen Shiel car park and the sun was well and truly shining After the six-and-a-half mile walk-out from Alltbeithe with our backpacks, the steep ascent to the Bealach an Lapain looked rather intimidating The well-engineered path initially made relatively light work of it, zigzagging its way up fairly gradually. Once we got above the forestry, however, we missed a side path that apparently branches off left uphill, and continued on the main path that makes a gently rising traverse eastwards above the forestry ... and then promptly fizzles out

! We suspected that we'd missed a turning somewhere, but rather than back-track and lose height, we just pressed on straight uphill, taking a directissima route up ... which was a very painful experience

! I don't think my thighs have quite forgiven me yet

...
All the same, the sun was shining, and needless to say there were plenty of stops on the way up to admire the widening views. The Saddle and Sgurr na Sgine were particularly prominent across the Glen to the west, and pretty much stole the show: 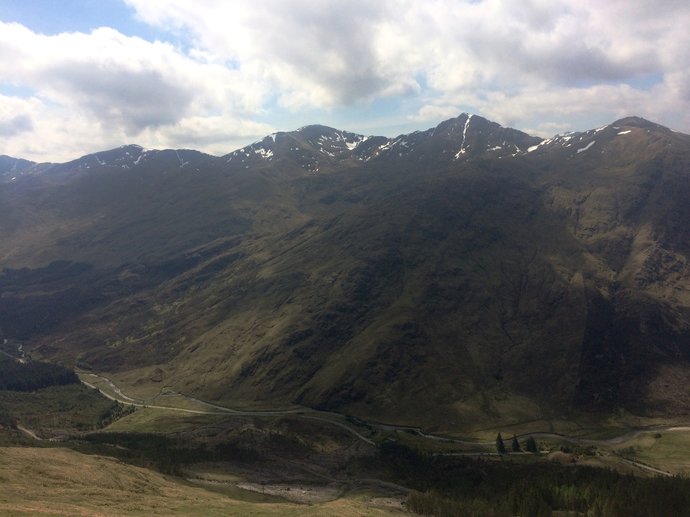 After what seemed (and was) rather a long time, we finally reached the ridge, to find that we'd overshot the bealach somewhat and were already almost halfway up Saileag! This was the view west, with the Five Sisters looking very impressive: Now, what was that huge wedge-shaped hill away in the distance ... could it possibly be Ladhar Bheinn? A look at the map confirmed that it was: there is indeed a somewhat improbable line of sight to it from Saileag through the Saddle / Sgurr na Sgine bealach. This is a zoomed shot: It really wasn't that much further at all to Saileag's summit cairn, where more fine views awaited: Looking eastwards to the pointed summit of Ciste Dubh, with Mullach Fraoch-Choire basking in the sunshine behind it. It was difficult to believe that we'd gotten a complete soaking just the day before, climbing Mullach F.C. in an easterly gale with driving sleet! A day is a long time in Scottish weather Beyond Saileag, the really enjoyable bit of the ridge begins, with a wonderfully airy skyline ramble on a good path, without too much height loss between the summits, and occasional mildly scrambly sections to add a wee bit of zest to proceedings without feeling unduly challenging. This was the first bit of ongoing ridge towards Sgurr na Bealaich Dheirg: 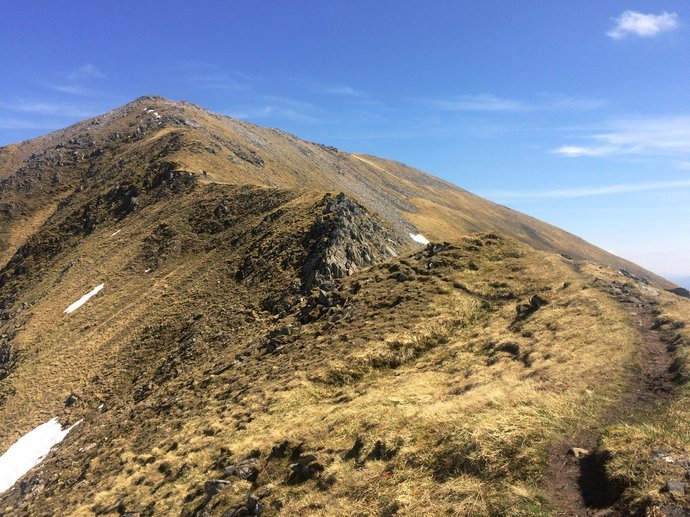 On approach to the Sgurr summit, with some lingering snow to the north. The true summit of Sgurr na Bealaich Dheirg is visible out on a narrow northern side-ridge: there is an improbably large and well-built cairn away out at the end marking the high point. We enjoyed the mildly scrambly section out the the big summit cairn, where we paused for a bit of a photo-shoot.
Malcolm and BHK at Sgurr na Bealaich Dheirg summit: Looking back towards the main ridge, with Yours Truly inevitably getting in the way in the foreground, and mountains a-go-go in the distance: This was one enjoyable Munro summit, but we eventually managed to tear ourselves away, and set off on the equally fine ongoing ridge towards the next Munro, Aonach Meadhoin. This was the approach to the Sgurr na Bealaich Dheirg / Aonach Meadhoin bealach: Malcolm enjoying a wee scrambly section on the ascent to Aonach Meadhoin: We met and chatted to a couple from England who had their dog with them. They were well ahead of us, and were setting off back downhill from the bealach as we headed on up towards Aonach Mheadhoin (I can't remember exactly what their planned route was, but it sounded ambitious!): Up at Aonach Meadhoin's summit cairn at last, with Ciste Dubh looking well pointy in the foreground, and Sgurr nan Ceathreahmhnan (which we'd climbed on Monday from Alltbeithe) looking very far away: Malcolm and me at Aonach Meadhoin summit: Within a couple of minutes, however, it had all proven too much for the Bobble-Hatted One 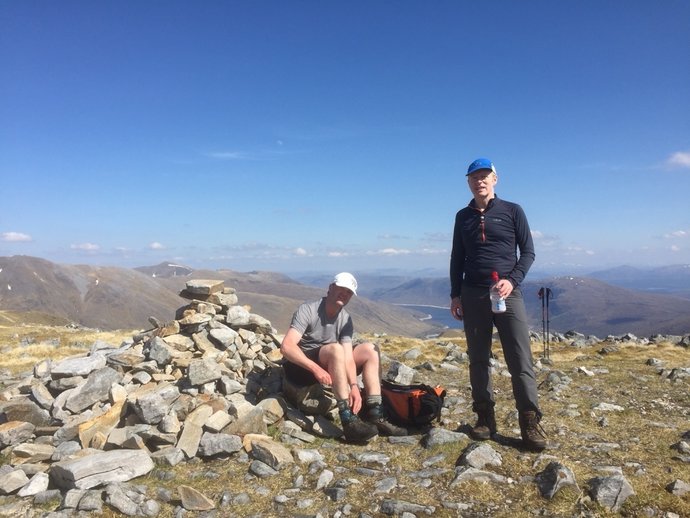 A hazy view of Ben Nevis away in the blue distance: To save as much as possible on time and distance, and to allow for a leisurely dinner at the Cluanie Inn before the drive home, Tom had painstakingly researched the shortest route over the three Brothers' Ridge Munros ... it turned out that this was to descend Aonach Meadhoin's steep south ridge (which was why we'd left the second car at the eastern edge of the forestry due south of it), rather than taking the more standard ongoing route to the Aonach's eastern Top, Sgurr an Fhuarail, followed by a more gradual descent of its south-east ridge.
The Aonach's south ridge actually didn't prove to be that bad: it was steep all right, but grassy with no crags, and it certainly got us down quickly! Soon enough, we were relaxing at the side of the burn at the bottom, enjoying the view back up with a rather impressive waterfall (named on the map as Steall Bhan) visible to the east: Ten minutes' chill in the sunshine by the side of the burn, before heading off to the Cluanie Inn and venison casserole for three! A really fantastic day's walking, this, which more than made up for the complete drenching we'd got on the previous two days' walks

Re: Affric Outing Day 3: The Brotherhood!

that looks like an amazing walk! Captured perfectly in your top notch photo's Kenny, nice one!!

Looks like the perfect day out, glad you both enjoyed it, need to get myself up to Glen Shiel on a day like that...

Re: Affric Outing Day 3: The Brotherhood!

I'm tempted to return to the Brothers Ridge after this

I think it's a fantastic ridgewalk but it suffers badly from the close proximity of South GS and The 5 Sisters. The initial climb is painful, but once on the ridge - magic. I know that some madmen do the Brothers and the Sisters in one go but that's beyond my poor old knees